After a convincing win against Napoli in the first leg of the Europa League, Premier League action beckoned for Arsenal in the form of an away match at Vicarage Road. Their opponents, Watford, had just come off the back of a stunning comeback against Wolves in the semi-finals of the FA Cup and would have liked to carry forward their momentum to the Premier League, upsetting the Gunners in the process.

What followed was a nightmare for the Hornets as they conceded a goal within 10 minutes before being reduced to 10 men as Troy Deeney was sent off for a late challenge on Lucas Torreira. In this tactical analysis, we’ll look at how the match panned out and the interesting tactics employed by both of the managers.

The home team lined up in an unusual 4-3-1-2, which was a departure from manager Javi Gracia’s preferred 4-2-2-2. The 4-3-1-2 had worked well against Wolves last Sunday at Wembley and he made four changes to that line-up. Ben Foster started in goal in place of Heurelho Gomes, defenders Adrian Mariappa and José Holebas were replaced by Daryl Janmaat and Christian Kabasele, and midfielder Roberto Pereyra was benched in favour of Adam Masina.

Arsenal lined up in a 4-2-3-1 with Konstantinos Mavropanos starting for the first time this season. Granit Xhaka returned to the starting XI while Mesut Özil, Sokratis, Sead Kolašinac, and Alexandre Lacazette were all rotated, most probably with Thursday’s away fixture in Naples in mind. 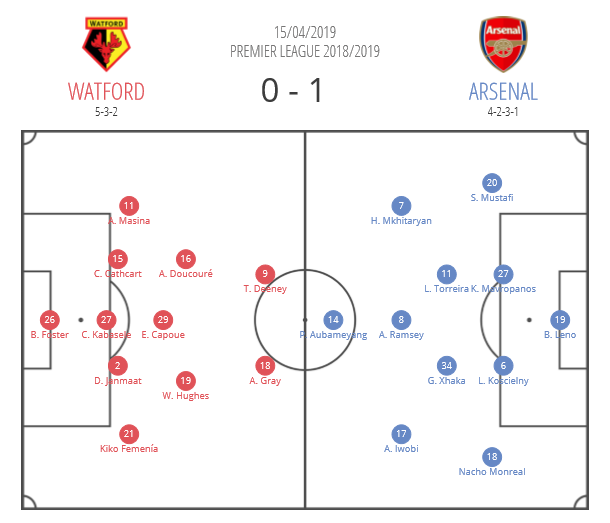 To all intents and purposes, the teams were well-matched before disaster struck in the form of a Ben Foster error in the 10th minute. Up to that point, Watford resembled a very-lopsided 4-3-1-2 in possession, often even becoming a 3-4-2-1.

When Watford had the ball, Daryl Janmaat didn’t move high and wide like a conventional modern full-back. Instead, he dropped back and formed a back three with the other two centre-backs, Christian Kabasele and Craig Cathcart. The left-back, Adam Masina, positioned himself high so as to stay in support of his midfielders.

Abdoulaye Doucouré played on the left of midfield with Francisco Femenía on the right, and Étienne Capoue as the deepest midfielder. Ahead of them, Will Hughes played off Troy Deeney and Andre Gray. Sometimes, Andre Gray would drop into the left half-space to draw out Mavropanos. It was also interesting to note that Femenía was the one providing width on the right, while Masina did so on the left, outlining the asymmetrical tactics of Gracia.

Watford had a very compact midfield and they looked to play short passes in the centre of the park to try and beat Arsenal’s counter-press. They didn’t necessarily try to build out from their own box under pressure as Foster went long more often than not. However, when they did, Hughes was the key to making it work.

He would try to find pockets of space in front of Arsenal’s back four and he mostly found those in the right-half-space. When he was occupying these areas, Janmaat tried to find him using vertical passes. These passes were laid off in the path of Femenía who tried to time his run in such a manner that he could evade Alex Iwobi’s tackle.

The nearest striker – Troy Deeney – would also show for the ball and then either turn his man or play a pass into Femenía’s path in space, who’d then cross the ball to Andre Gray. Deeney would also move out entirely wide as Monreal was targeted as a weakness. Watford tried to find him in a one-on-one with Monreal, often during attacking transitions when the entire Arsenal defence would be back-peddling.

Need for full-backs in attack

A team is only as good as its full-backs and Arsenal’s performance against Watford proved the commonly-held belief. Arsenal played with neither of their first-choice full-backs. Shkodran Mustafi and Nacho Monreal filled the positions in question and although they both had a great game defensively, they left a lot to be desired in the other half of the pitch.

Arsenal’s system is heavily dependent on the full-backs. They act as the major playmakers of the team and it’s up to them to provide width in the final third as well as keep the attacking mechanism going. It might be said that Arsenal are perhaps too dependent on their full-backs and this one-dimensionality has been a cause of concern. Mustafi is a centre-back while Monreal, albeit a full-back, doesn’t possess the pace or the energy to keep the Arsenal attack ticking.

Hence, Emery has mostly used Monreal as the left centre-back this season, a role which the Spaniard has made his own, with his intelligent passing down the flank. Against Watford, Monreal barely overlapped or moved forward to combine and this affected Arsenal’s attack massively.

Iwobi was often left isolated on the flank and when he did get on the ball, he only had passing options to the centre with no overlapping option making it harder to drift inside. Furthermore, it also made the opposition full-back’s job easy since he didn’t have to deal with a overload out wide.

A similar pattern was repeated on the right side as Mustafi was also very conservatively positioned. This isolated Mkhitaryan, who lacked the support he needed and often found himself dribbling into two Watford defenders with Aaron Ramsey too far away to combine.

All of this affected the structure adversely. Since Arsenal’s full-backs weren’t stretching the pitch as part of a flat back four, the wingers, namely Iwobi and Mkhitaryan, had to stay wide to stretch the pitch.

This resulted in them being unable to drift inside with Ramsey and Aubameyang getting isolated in the centre. Although Watford’s midfield and defensive lines were poorly compressed, Arsenal couldn’t take advantage of this as there was a clear disconnect in between the attacking midfielders and no occupation of the half-spaces.

Aaron Ramsey was functioning in the number 10 role and he tried his best to provide half-space support on the near side, but since he was the only player in between lines it was all too easy for Capoue to man-mark him. Besides, Ramsey isn’t at his best when he’s trying to play in the hole – not like Mesut Özil, at least.

He’s much better suited to a deeper role from where he can carry the ball himself making late attacking runs into the box. To compensate for this, when Aubameyang tried to drop deep to receive and link up play, he was followed by the Watford centre-backs.

Another detrimental effect of Arsenal’s rigid wing-play was that the opposition full-back had no trouble in marking the wingers. As soon as Iwobi got on the ball, he was hounded by Janmaat and not allowed to turn. Mkhitaryan had similar issues on the right wing with Masina not giving him any space.

If however Arsenal had deployed inverted wingers like they usually do, both the full-backs as well as the centre-backs would have had to worry about the wingers inside the half-space which would have opened up spaces on the wing for the full-back to run into. Whether this was intentional by Emery because he simply wanted to retain possession after a win had been secured is debatable, but he soon realised the limitations of the current structure and made certain changes in the second half.

Arsenal mostly attacked down the left side. This was because Monreal’s passing was better compared to Mustafi’s. The German had a 77.3% passing accuracy compared to Monreal’s 85.3%, despite having attempted fewer passes than the Spaniard. Another reason was that with the absence of Lacazette, Iwobi was the only player who could hold up the ball for until his teammates could join the attack during Arsenal’s offensive transitions.

Coupled with his dribbling abilities, he was also the team’s only player who could, if given the chance, dribble past the opponent and pull a cut-back into the box. He attempted five dribbles, the highest amongst all players on the pitch, one higher than Doucouré.

Emery brought on Özil at half-time for Torreira and Guendouzi for Mavropanos, and Maitland-Niles for Ramsey soon followed. With the changes made, Arsenal moved into their tried-and-ested tactics, with both wingers cutting inside more frequently so as to leave the flanks open for the full-backs.

Özil was much better at connecting the thirds as his body shape and ability to recognise space as well as execute the final pass with precision was key to Arsenal creating a host of chances in the second half. Although poor finishing kept them away from another goal, these changes did spark some life into Arsenal’s passing in the final third as well as the fluidity of the attack.

After Deeney’s red card, Watford moved into a 4-4-1 defensive medium block. Hughes moved over to the left of the midfield, while Capoue stayed a little deeper as he had to mark Ramsey. Watford were focused on not letting Arsenal progress through their midfield. They pushed up in a 4-1-4, with a higher line of engagement. The striker would zonally protect the area around the double pivot of Torreira and Xhaka screening a pass into either of them.

Their job was made easier by the fact that Arsenal’s full-backs weren’t higher up the pitch which made it easier for Watford’s wide-midfielders to mark them. Hughes and Femenía stayed in their zones, but if they sensed a pass coming into their respective full-back they moved with them to ensure they didn’t have space to turn and could only pass backwards.

Watford’s backline didn’t move particularly high up as they hadn’t any Arsenal presence in between lines to worry them, and they could risk leaving spaces in midfield. This was a key decision because a high line would have given Aubameyang the opportunity to test his pace against the centre-backs.

Watford pressed in a very intelligent manner, again led by Hughes. They didn’t press too high up the pitch but they had certain clear-cut triggers which sparked well-drilled pressing movements. The most common was the back-pass from the full-back to the centre-back. For instance, once Mavropanos passed the ball to Mustafi, he would be immediately pressed by Hughes.

Simultaneously, Gray would close down the passing lane back to Mavropanos so that the only pass left was the one back to Leno. Once that was made, the entire Watford midfield would push up and close down all immediate passing options to the centre-backs, and defensive midfielders. Leno had no option other than hoofing it clear which resulted in either Capoue or Cathcart winning the ball.

Although a scruffy performance, Arsenal will no doubt not complain much. They needed some momentum with their away matches as well as a confidence boost ahead of the second leg of the Europa League fixture. This lineup doesn’t do Arsenal any favours in terms of creating chances to score, as well as regular entry into the final third. Emery will know that against a better side and without luck on their side, they might have come out of this match as the worse off of the two teams.