Milan Škriniar joined Inter from Sampdoria in the summer of 2017 and has become a mainstay of the Nerazzurri‘s defence since then. The Slovakian defender has gone from strength to strength and established himself as one of the best centre-backs in Europe. This tactical analysis will profile Milan Škriniar and use statistics and game footage to highlight what he does best.

Škriniar is a 24-year-old defender from Slovakia. He started his professional career at MŠK Žilina before moving to Serie A in 2016. At that point, Škriniar joined Sampdoria after their renowned scouting system had identified him as a future defensive lynchpin. In his first full season, Škriniar became a regular at the heart of defence as Marco Giampaolo established his footballing philosophy at the club.

After a successful season, Inter targeted Škriniar as the man to build their defence around as they looked to build a team capable of challenging Juventus for the Scudetto. Škriniar had a great first season at the club and has continued impressing this season alongside either Stefan De Vrij or Miranda at the heart of Inter’s defence. Despite his age and relative inexperience, Škriniar has become one of Inter’s most important players.

What kind of defender is Milan Škriniar, then? Actually, the Slovakian is quite the complete package. In Serie A this season, Škriniar averages 2 tackles, 4 clearances and 0.9 interceptions per game. He’s extremely good physically, both in the air and along the ground, with impressive speed. Below, I’ll look at his one-on-one defending, positioning and his passing.

What’s most impressive about Škriniar is his one-on-one defending. This is due to him doing the basics extremely well. The image below is a case study in how to defend one-on-one situations.

Firstly, Škriniar looks at the ball rather than Coutinho’s quick feet looking to deceive him. The way he positions his feet is exemplary. He is always side-on and that allows him to move in all directions. Here, Škriniar can move to his right, to his left and towards Coutinho. This is what allows him to push forward, make the tackle and win the ball here. 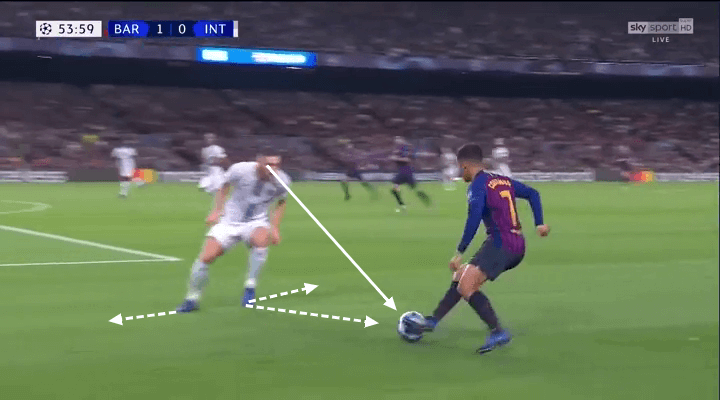 The image below highlights Škriniar defending one-on-one against one of Serie A’s best dribblers, Alejandro Gómez. The defender has a perfect body position to defend the situation.

If Gómez goes down the line, Škriniar can follow him. If Gómez comes inside, Škriniar is ready to make the tackle. He could also back off or step into a challenge. In the end, Škriniar makes the tackle and wins the ball. 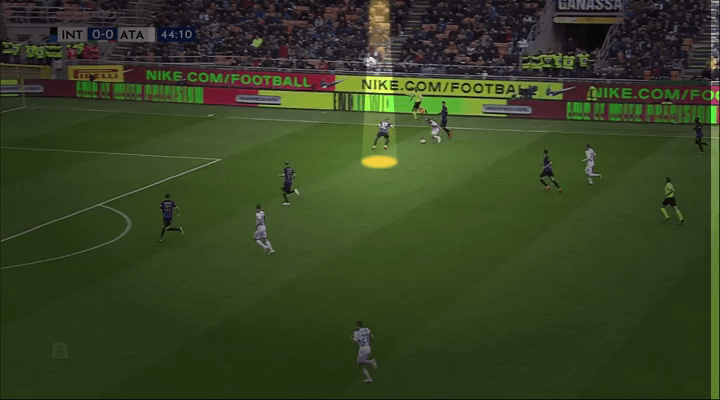 This ability to defend individually is a huge asset for an attacking team as it’s not uncommon for them to leave only two defenders back when attacking. This means the central defenders are often exposed and forced to defend huge spaces.

The below sequence highlights how Škriniar handles such a situation. The first image highlights Škriniar’s excellent body position when the attacker starts dribbling towards him. Škriniar’s feet allows him to move in every direction seamlessly. 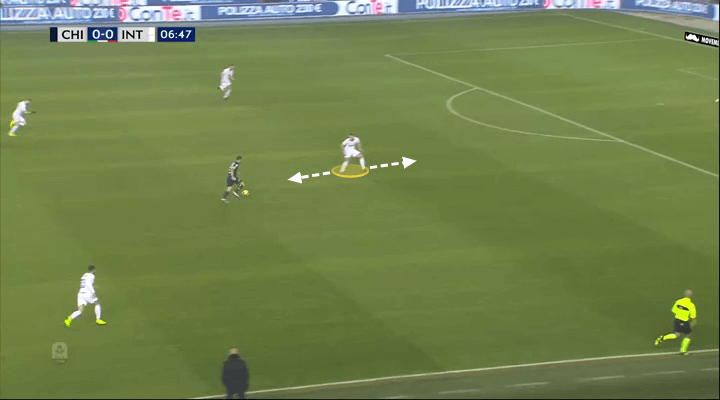 As the attacker now turns inside Škriniar has quickly changed his body position and prepares to follow the attacker’s movement inside. This quick change is made possible by his excellent footwork with him always on his toes ready to change his position. 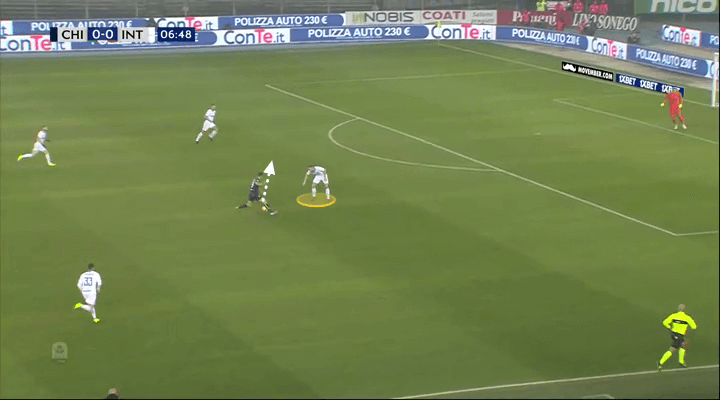 Now, Škriniar is in a great position to make the tackle. He duly does, wins the ball and has helped Inter defend a potentially dangerous situation. 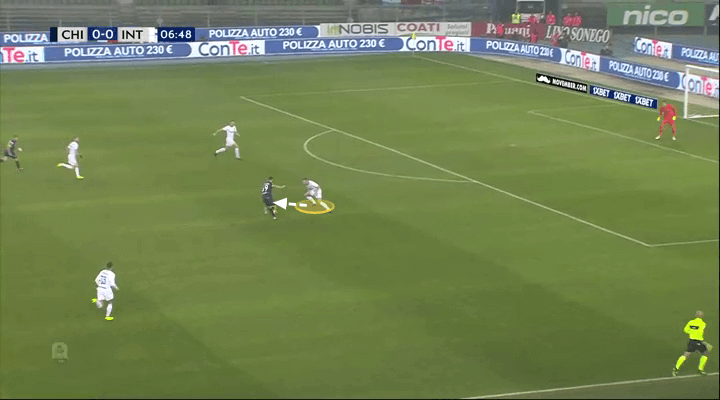 Another essential ability Škriniar possesses is positioning. The centre-back is usually fantastically positioned and he reads the game really well. There’s no doubt that Škriniar picked up a lot on how to position himself under the guidance of Marco Giampaolo at Sampdoria. This is particularly helpful when faced with crosses.

The image below highlights Škriniar (yellow) preparing to defend a cross from Gómez (white). When Škriniar is the ball-near centre-back, he has the job of defending the front post area. Just as when defending one-on-one situations, Škriniar is positioned side on and can, therefore, move in every direction. On this occasion, this allows him to move towards the ball and head it clear. 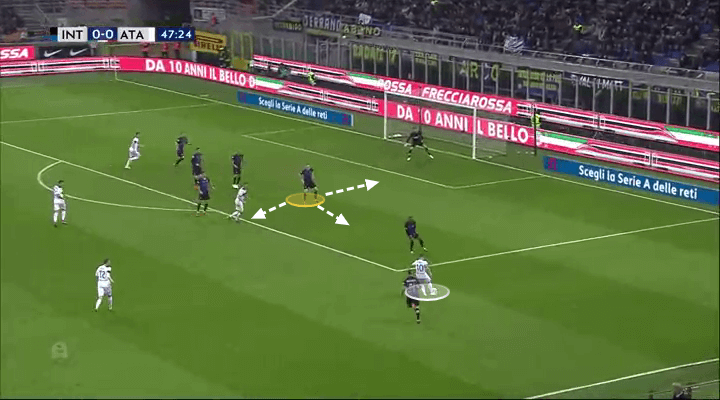 In the below situation, Škriniar is again positioned perfectly to deal with the cross from Suso on Inter’s left wing. His positioning once again allows him to move in all directions. 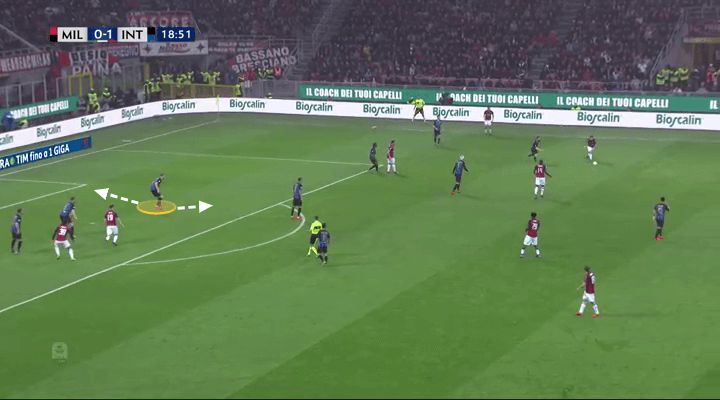 When the ball comes from the opposite wing and Škriniar is the ball-far centre-back, his responsibility is to defend the area just in front of the centre of the goal. In the image below, Paquetá (white) is about to cross the ball into the centre. Škriniar is once again defending side on. As the cross comes in, Škriniar is able to move in front of Piątek, win the physical battle and head the ball clear. 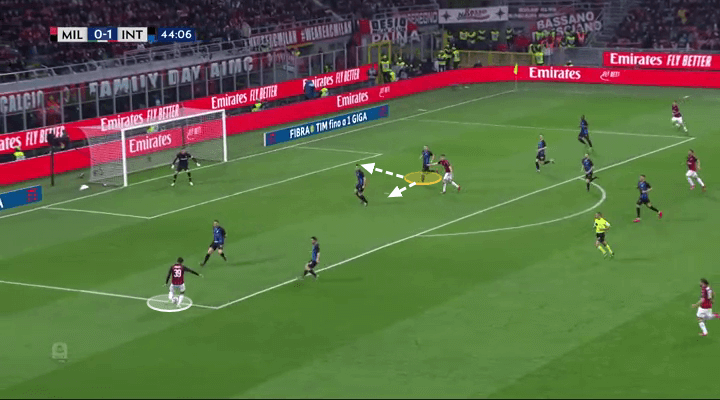 Škriniar’s positioning has been one of the key reasons behind his rise in Italian football. This positional intelligence along with his physical abilities is what makes him such a stunning defender.

Superb use of the ball

Škriniar is also a huge asset for Inter when the team is in possession. His influence can be seen in him averaging 68 passes at a completion rate of 92.3%. Škriniar can play in either position at centre-back, both to the right and to the left, and maintain his ability to construct the team’s build-up play. He is comfortable stepping out with the ball as highlighted below where he dribbles out from the back before playing the ball through for his teammate. 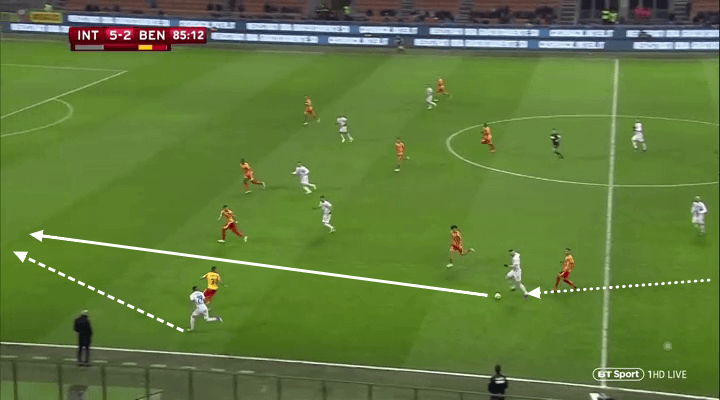 Škriniar is always looking to break the lines of the opposition. His passing ability allows him to do so time and time again. The image below highlights Škriniar threading a pass through to Vecino between the lines.

This ability is crucial when playing for big teams who often face teams defending in a low-block. Centre-backs will see plenty of the ball and need to have the tools to add something to the possession phase. 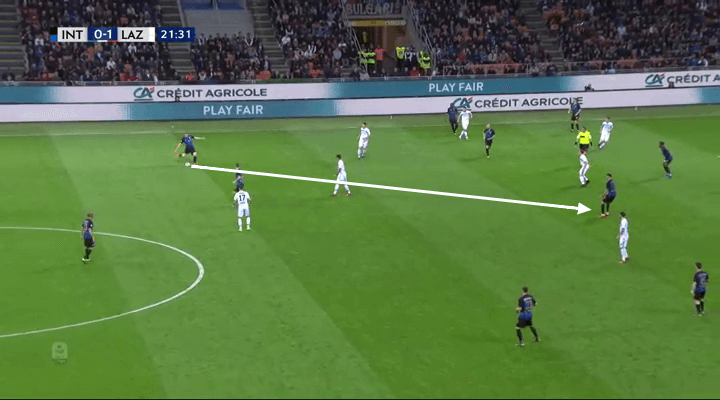 The image below is another example as Škriniar plays the ball into Perišić. 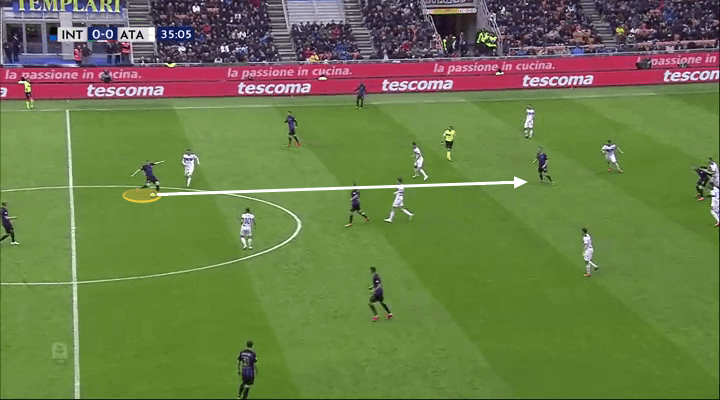 The Slovakian is a great passer of the ball and it’s understandable that he’s been linked to clubs like Barcelona and Real Madrid where centre-backs need to be superb in possession. He can play passes through teams, as highlighted above, he can step out of defence with the ball and he can play longer passes when needed. In fact, Škriniar has often played in central midfield for Slovakia to further highlight his quality with the ball.

Milan Škriniar is already one of Europe’s best defenders. As this analysis has shown, he is fantastic one on one, strong in the air, he’s quick and powerful and his positioning is excellent. Add his progressive passing and you have a centre-back capable of playing at every single one of Europe’s top clubs. Inter will be desperate to hold on to the Slovakian but expect the likes of Manchester United to test their resolve in the summer.