Liverpool and Manchester City. What do they have in common? Well, other than being two northwestern English clubs, they are also the only clubs with a better defensive record in Europe’s top five leagues than Sampdoria. Yes, Sampdoria. Marco Giampaolo’s team have only conceded four goals in their first eight league games. This tactical analysis will look at Giampaolo’s defensive tactics which have proved so effective.

Giampaolo has become synonymous with the 4-3-1-2 formation which he has used exclusively in his time at Sampdoria and also at previous club Empoli. The shape includes a back-four, three central midfielders, one number ten and two strikers. Since this is Giampaolo’s third season in charge at Samp, you’d be forgiven for thinking Samp’s success comes from having a core of players who know the system by heart. This is not the case as Samp have had players come and go throughout Giampaolo’s reign. To consistently be able to transfer his ideas to new players seems to be one of Giampaolo’s strengths.

After his first season he lost his central defender Milan Skriniar and this summer he lost his first-choice defenders, Matias Silvestre and Gian Marco Ferrari. Added to that, his defensive midfielder Lucas Torreira was sold to Arsenal.

Giampaolo is backed up by the superb sporting director Carlo Osti who consistently finds players perfectly suited to Giampaolo’s football. This season sees the young Dane Joachim Andersen lead the defence alongside Omar Colley who was brought in from Belgium. Swedish international Albin Ekdal has been brought into Torreira’s old role and has been superb thus far. The quality of Sampdoria’s recruitment has given Giampaolo the right players for his tactics and he’s quickly managed to get them to grasp the concepts of his football.

Giampaolo uses a positional defensive setup with occasional man-orientations in certain games or certain phases of the game. I’ve explained what positional defending is in this piece, but largely it means the team defends according to the position of their teammates, the ball and the space. This is in stark contrast to a man-orientated defence where the first focus is to mark opponents. Giampaolo’s positional approach means the team primary target is to keep a compact shape to be tough to play through and then take the rest from there. Now let’s get into the details.

Giampaolo’s 4-3-1-2 is by nature narrow and his aim is to restrict the opportunity to play through his team centrally. This forces teams wide where Giampaolo is happy for them to have the ball. Sampdoria’s three midfielders cover the two half-spaces and the central space and the number ten provides a presence between midfield and attack to block progression through that space as well. The image below is a good illustration of how the formation looks. It’s extremely compact and tough to play through that shape. 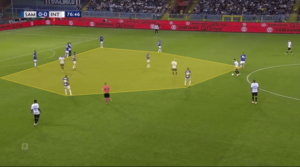 Below is another example of what the shape can look like. Giampaolo tweaks the positions of the two wider central midfielders slightly depending on the style of the opposition. Against teams trying to play through the centre, such as Napoli or Juventus, Samp are extremely narrow with their midfield. But against teams like Atalanta who often use the wings they a bit wider. Below is an image from the game against Atalanta where the left-sided central midfielder Linetty prepares to move wider which is possible given Atalanta’s lack of central options within Sampdoria’s structure. 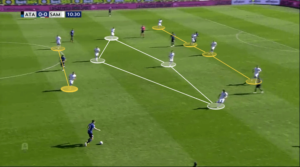 Please also notice the positions of the back-four in all these images. They always keep an impeccable line. This is one of the things Giampaolo works extensively on and which is key to the successful implementation of his ideas. In order to keep a compact team, all players need to push up whenever the ball is played backwards and the central defenders are pivotal as they always push the team up that extra two or three meters which are crucial. This creates the compact shape Giampaolo wants and which can be seen in images like below. 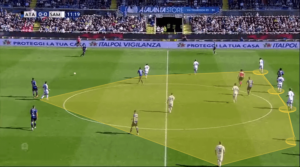 As Sampdoria aim force teams wide, they need to have ideas on how to deal with the ball in those areas. Below is one example. Samp again keep a very compact shape and blocks the centre. The ball is played wide and the ball-near central midfielder moves out to press. This is the way Samp deal with wide areas in the attacking half and in the middle of the pitch. They have a different way of dealing with this in their own third, which I’ll look at later. 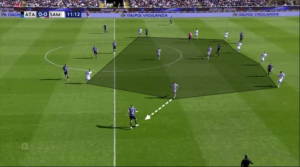 When the ball has reached the wing-areas then Samp look to overload around the ball to force an interception or a tackle to win the ball. Below is an example of how Samp has overloaded the wide area. The ball-near central midfielder provides pressure with support from the left-back, the defensive midfielder, the number ten and one of the strikers. 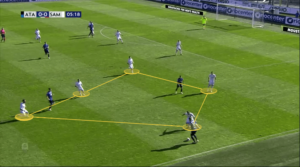 The compactness of Sampdoria’s shape is key to preventing opponent’s to play through the centre. Now let’s look at how Giampaolo’s team deals with the inevitable crosses they face.

As teams are forced to play wide against Sampdoria they look to create chances from crosses. Giampaolo obviously has ideas on how to deal with this as well. We see the basic setup below. With the ball on their left wing in this occasion, the left-back (white) provides pressure on the ball. The ball-near central midfielder (black) gives his teammate cover should he be beaten. The other three defenders prepare to defend the penalty area. They drop a bit deeper to get an angle on the left-back in order to not get beaten by an early cross. The ball-near central defender defends the first-post area while the other central defender defends the central area just in front of the goal. The ball-far full-back defends the back-post area. The remaining two midfielders act as second-ball players ready to win a second-ball or to stop a cutback. 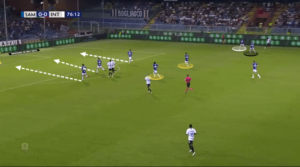 Below is another example. Full-back and ball-near central midfielder provides pressure and cover on the crosser. The remaining defenders and midfielders pick up the same positions as above. 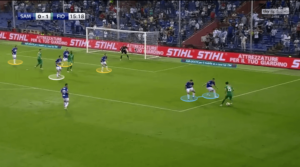 This setup gives the team a very good coverage of all the spaces in the penalty area and makes Samp well prepared to face crosses despite opponents often founding space in the wide areas.

Giampaolo doesn’t always decide to press high, but in some games and especially at home Sampdoria can be seen pressing high up the pitch. When they do, they leave their otherwise positional structure for a slightly more man-orientated setup. Let’s have a look.

The formation remains the same but against teams with a back-three such as Atalanta, the number ten sometimes moves up into the same line as the strikers to start the press. The goal is to force a long-ball or a pass wide where the ball-near central midfield will press with the ball-near full-back’s support. The image below is an example of how they start this press. The striker leads the press on Atalanta’s right-sided centre-back. The number ten is in a position ready to press the central centre-back should the ball be played there. The presser tries to steer the play wide where the left-sided central midfielder is ready to press the wing-back. 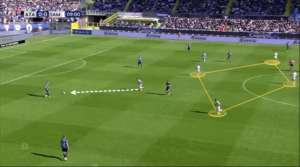 The starting positions of Sampdoria’s front-three makes them well-suited to press teams trying to build up with two centre-backs. This was the case against Inter and Napoli this season. This is where the man-orientations come into Giampaolo’s system. The two-strikers will mark the centre-backs while the number ten will mark the midfielder coming to receive. The wings will be left open to tease the opponent into an air-pass to the full-back who will then be pressed aggressively by the ball-near central midfielder as highlighted below. The Inter goalkeeper Samir Handanovic plays an air-pass to Kwadwo Asamoah as all other options are blocked. Asamoah is instantly pressed by Sampdoria midfielder Edgar Barreto. 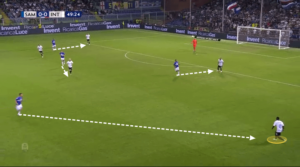 Marco Giampaolo has built one of Europe’s best defences at Sampdoria and he keeps them performing every season despite having large player turnovers. He seems to get his message across quickly and his work in Genoa so far has been terrific. Giampaolo remains one of Italy’s most exciting coaches and it remains to be seen when he gets a job at a bigger club. Giampaolo’s Samp also plays some of the most attractive passing football in Italy but that will be the subject of another analysis.