Manchester City vs Liverpool provided this Premier League season’s most anticipated match. Liverpool entered the match with a seven-point advantage over City at the top of the table. The hosts were under pressure to claw back some ground as Liverpool only have three remaining fixtures against top-six teams table. A 10-point lead and a soft schedule could have put Liverpool out of reach.

The match did not disappoint with City taking the 2-1 victory through goals from Sergio Aguero and Leroy Sane. A lone goal by Roberto Firmino for Liverpool was the reply. Among all the individual brilliance of the match, there was an interesting tactical strategy in Liverpool’s midfield setup that largely backfired. This was followed by a second-half adjustment that propelled a listless Liverpool back into the match, as this tactical analysis will explore.

Liverpool started the match with a 4-3-3 including a flat midfield three consisting of Georginio Wijnaldrum, Jordan Henderson, and James Milner. City also went with a 4-3-3 with Fernandinho in a holding midfield role while David Silva and Bernardo Silva pushed higher.

In the picture below we see the Liverpool front six defending against Manchester City’s build-up from the back. Henderson in the middle of the midfield trio is pushed ahead of Milner and Wijnaldrum. He is anticipating stepping towards Manchester City holding midfielder Fernandinho. 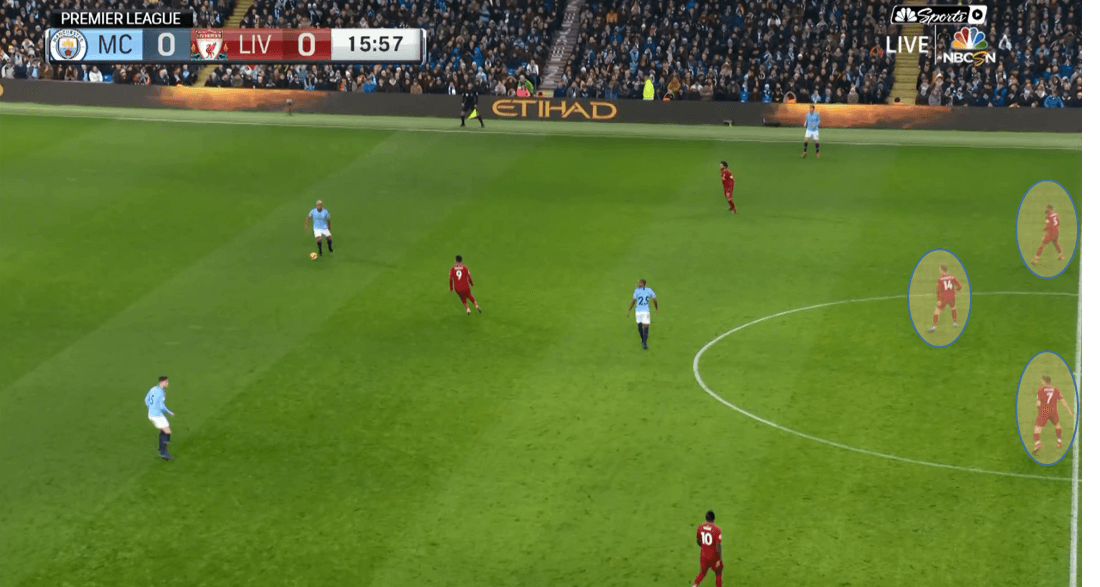 Liverpool are defending Manchester City’s back four plus Fernandinho with six players. Liverpool’s flat three in midfield leaves Wijnaldrum and Milner on islands to cover both the  City attacking midfielders sitting off their back shoulders and the forwards checking between the lines.

Here we see Vincent Kompany play a penetrating pass into the checking Aguero just off of Milner’s shoulder. This one pass eliminated Liverpool’s entire front six. 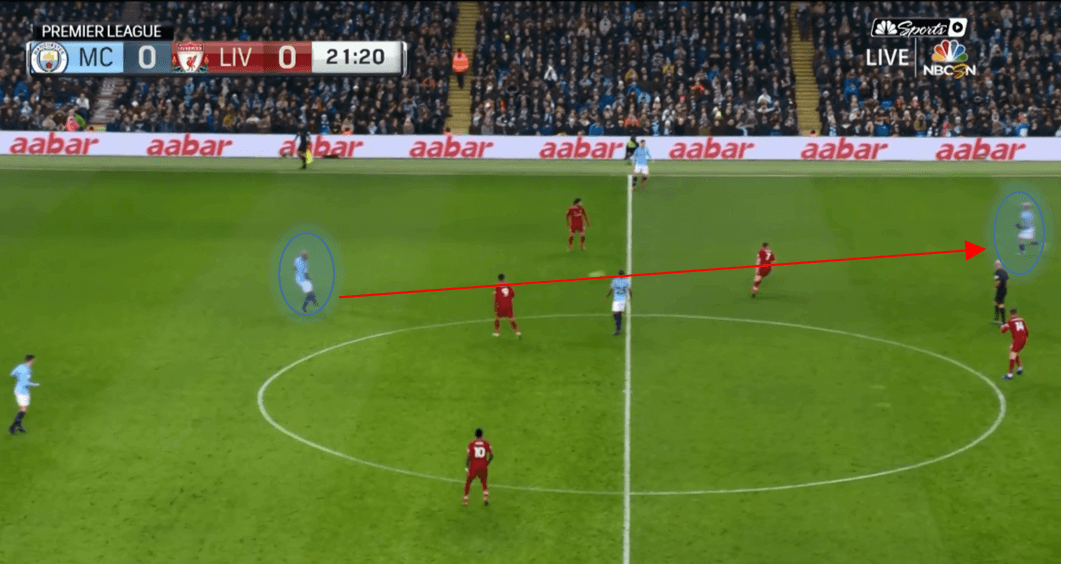 The tactical defensive setup for Liverpool caused their midfield to scramble and chase the entire first half. Manchester City held a 56% to 44% possession advantage in the opening period. 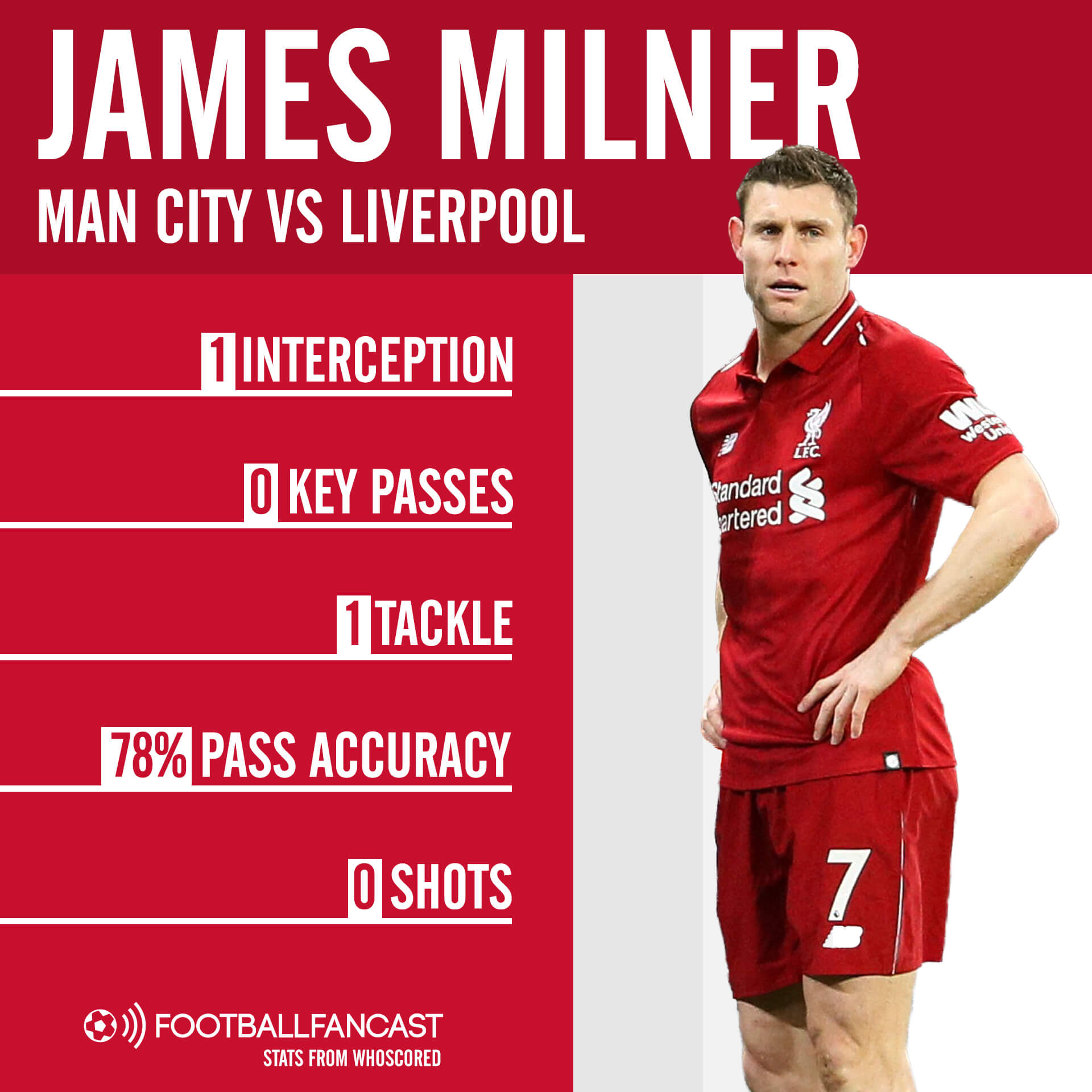 Liverpool’s flat midfield three could not handle the players checking into space behind them. The front three did not provide enough pressure on the ball to prevent the penetrating pass. The image below shows two Manchester City players positioning behind the Liverpool flat midfield and no pressure on John Stones. 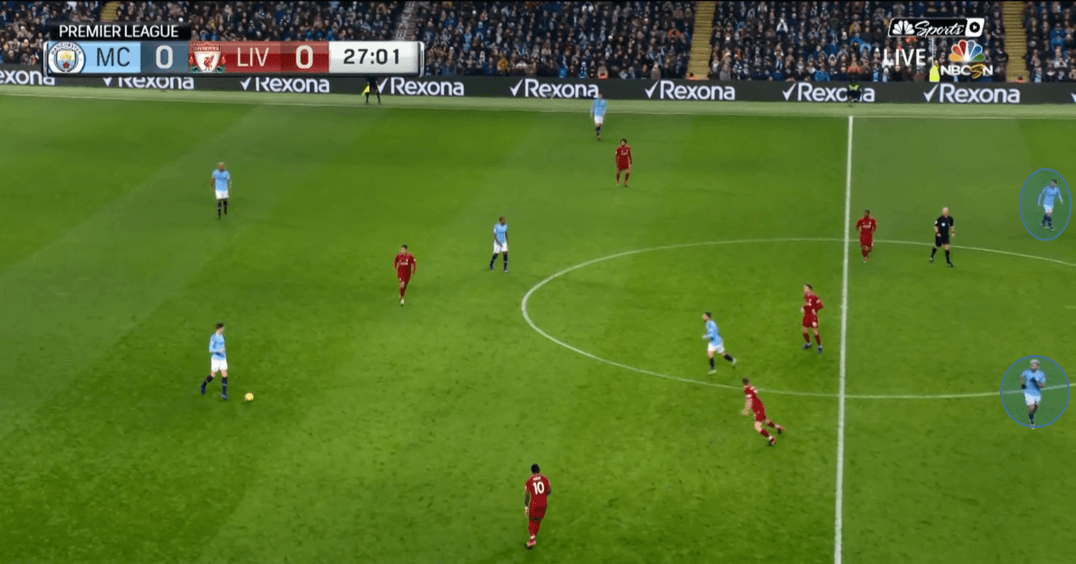 Manchester City overloading the left side 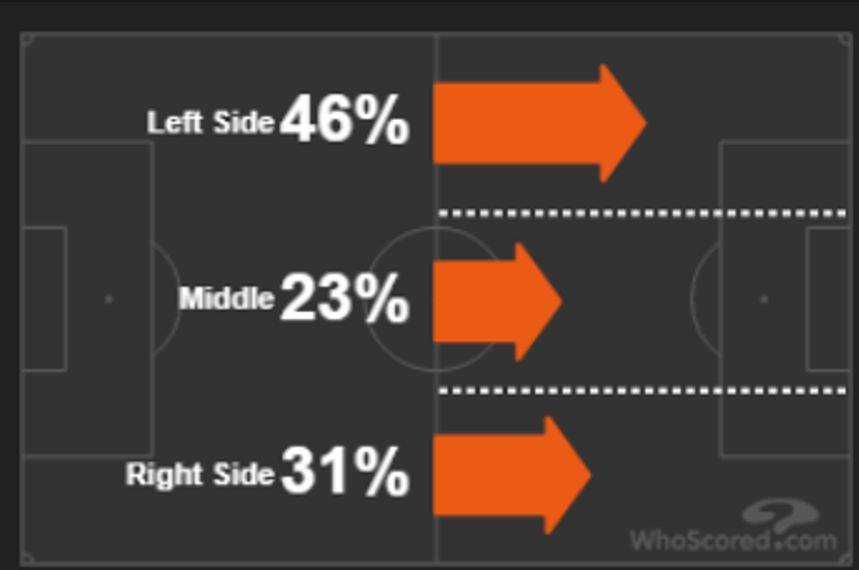 The build-up to Aguero’s goal began with Kompany playing a penetrating pass removing six Liverpool defenders on the left side of the pitch. The following sequence shows how the move developed from there. 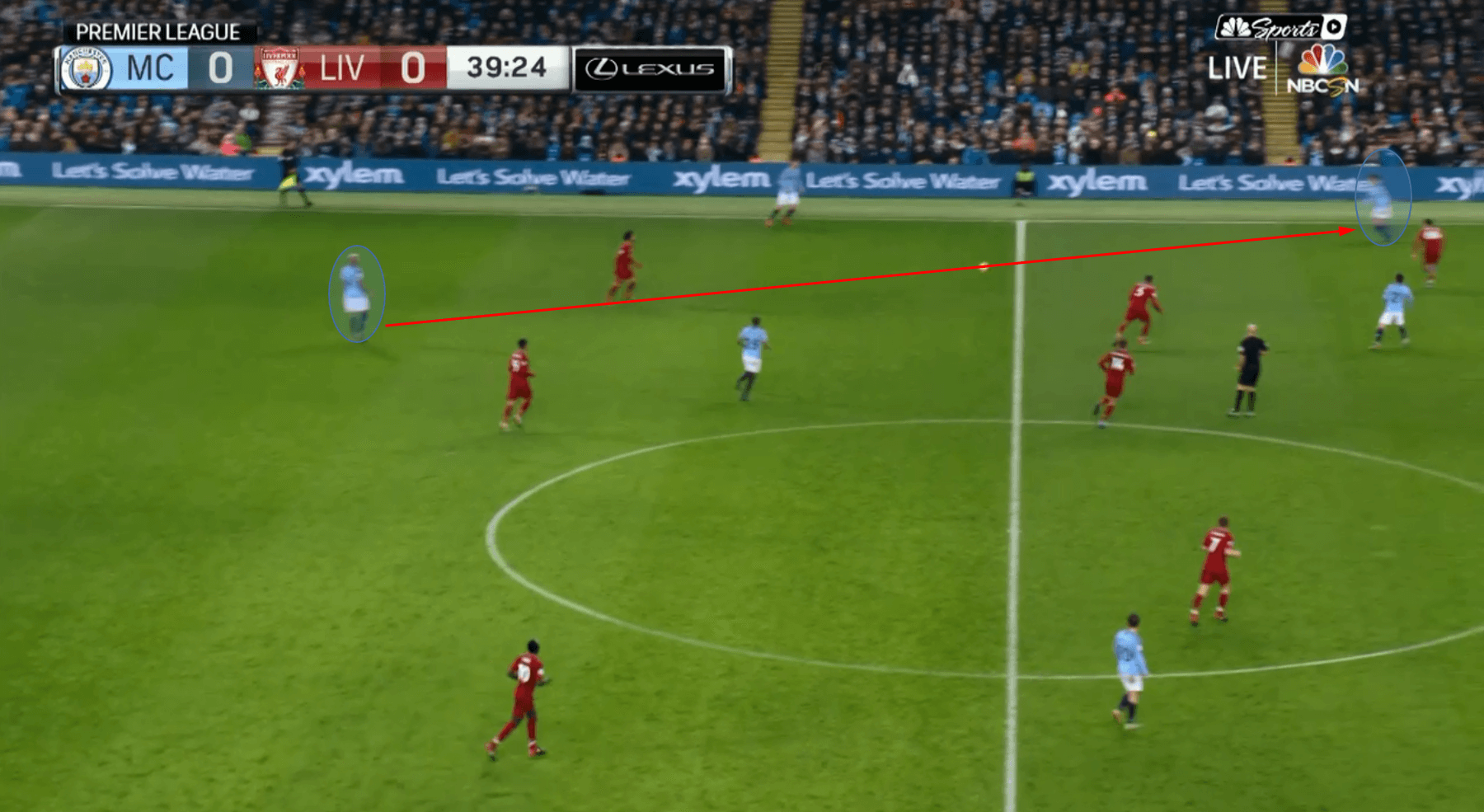 With one touch, Sane drops the ball to Aymeric Laporte, spins out and runs in behind the Liverpool defence. Dejan Lovren is stepping towards David Silva as highlighted in yellow. 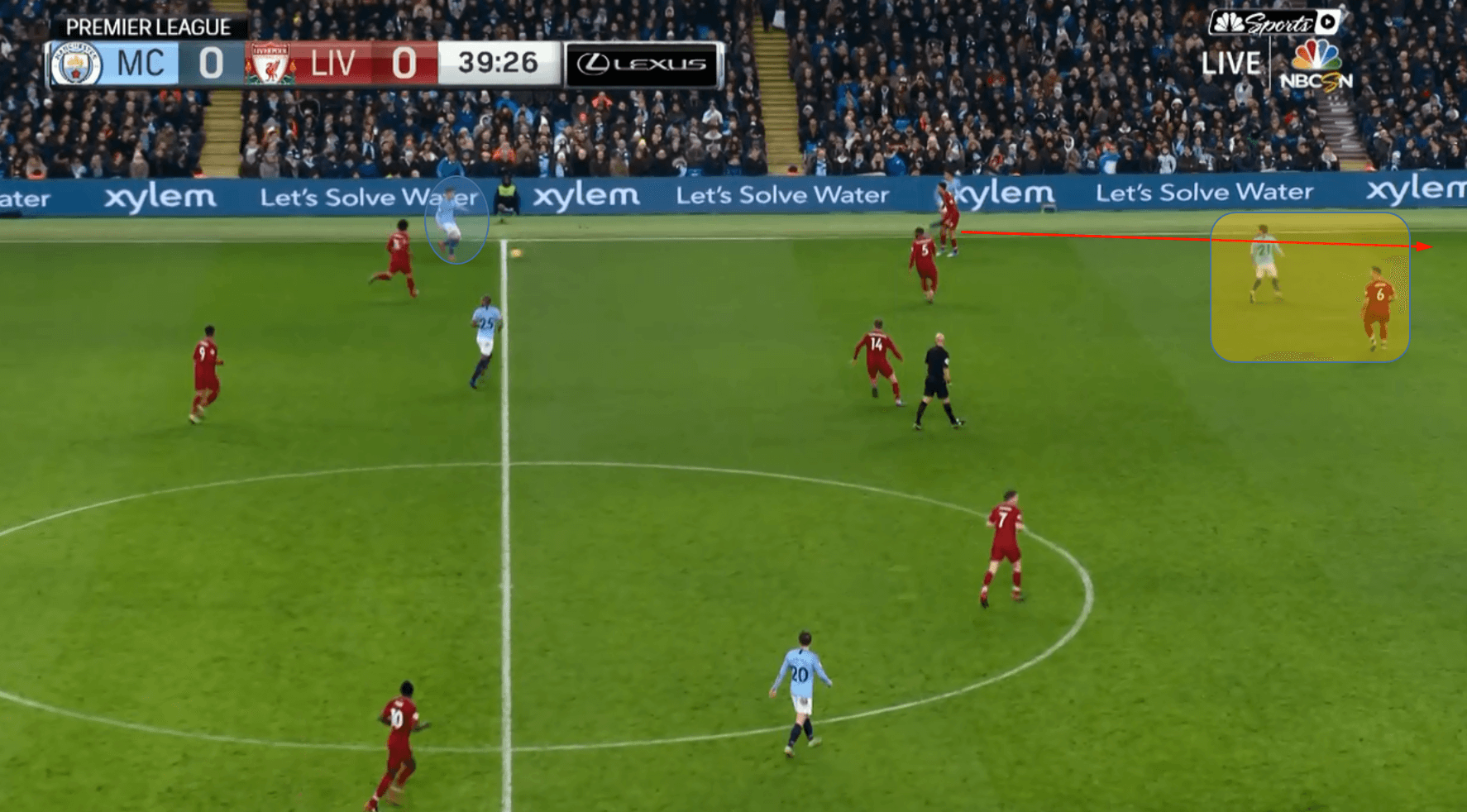 The left side attack allows Sane to get isolated with Dejan Lovren with Aguero, Raheem Sterling, and David Silva joining in to create a 4v4 attacking Liverpool’s goal. 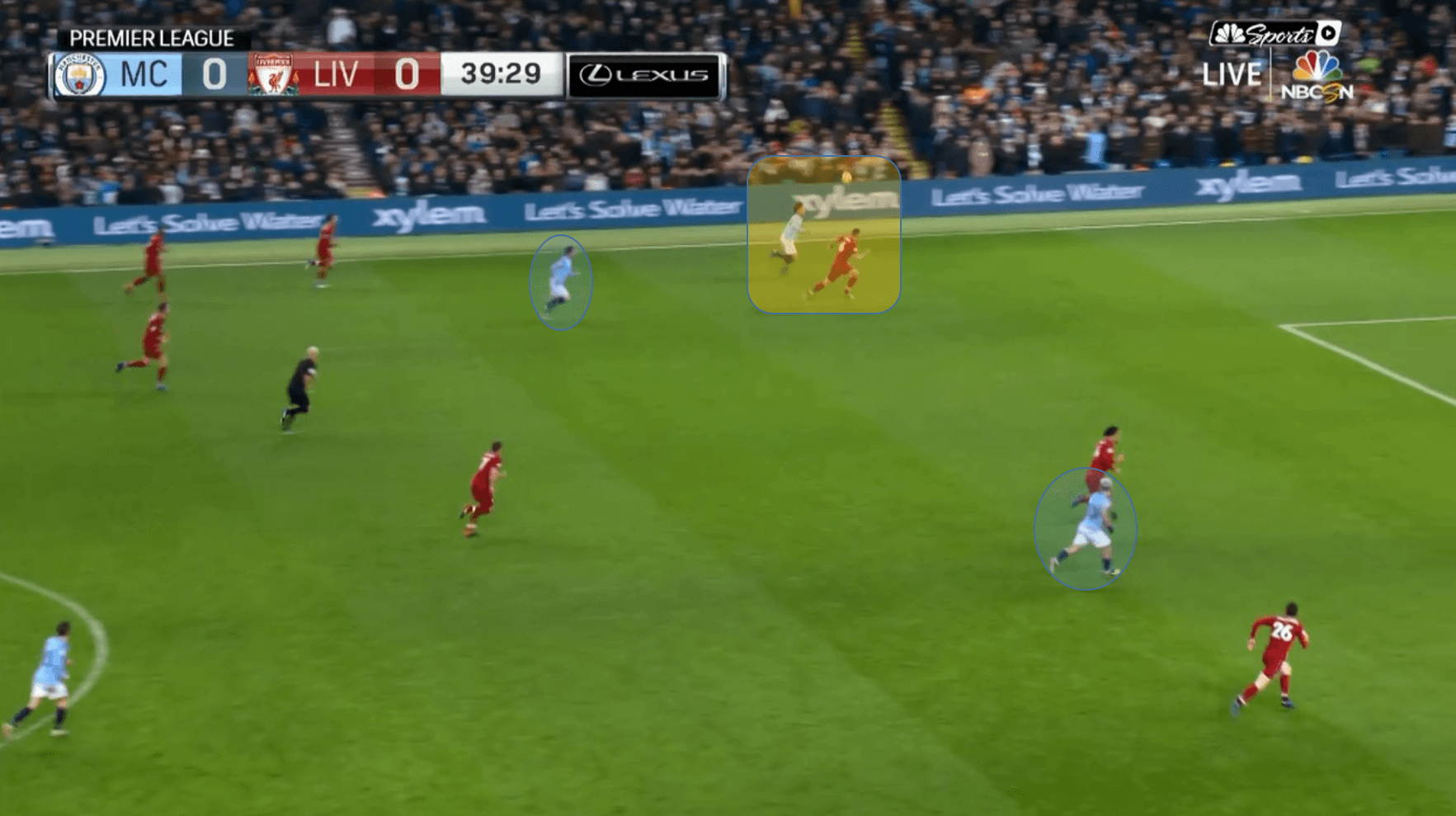 The Liverpool keeper, Alisson, makes a great save as Sane goes for goal. 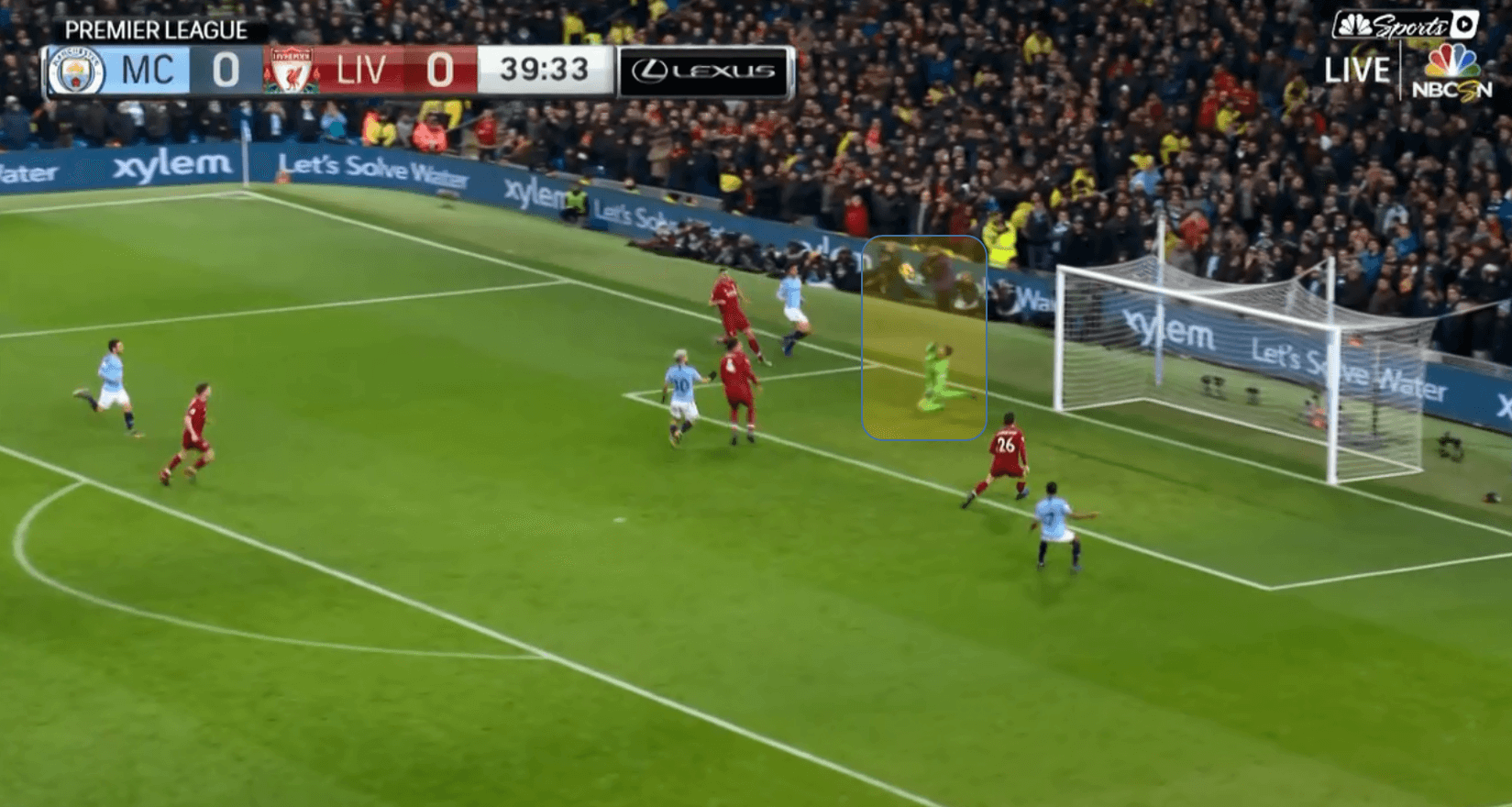 Despite the great save, Liverpool cannot recover from the scramble in the box. Manchester City get the ball wide on the left again and Aguero comes off of Lovren’s shoulder and buries the shot. 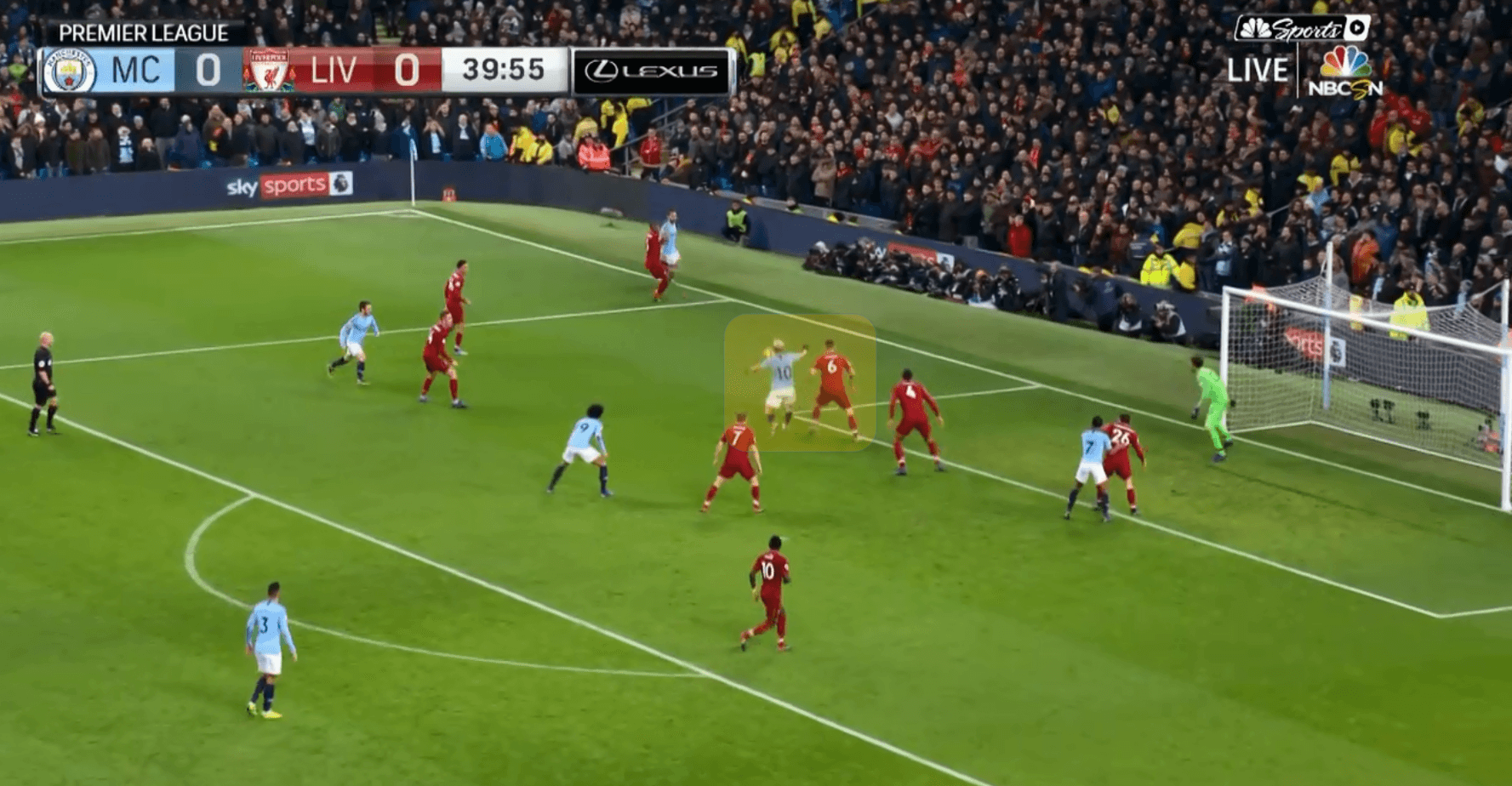 In the 57th minute, Liverpool brought on Fabinho for Milner. Liverpool adjusted their tactics to play a 4-2-3-1. Fabinho and Henderson played the double pivot with Wijnaldrum going to the left side. The change allowed Liverpool to defend the Manchester City back four and Fernandinho with four players.

It also gave depth in midfield to remove the Manchester City attackers from easily getting between the lines. Here we see the double pivot of Fabinho and Henderson sitting deeper than the flat three midfield. Firmino is in with Fernandinho denying him space between the lines. Wijnaldrum is wide left in front of the ball. Salah is shaded towards the center back Stones. 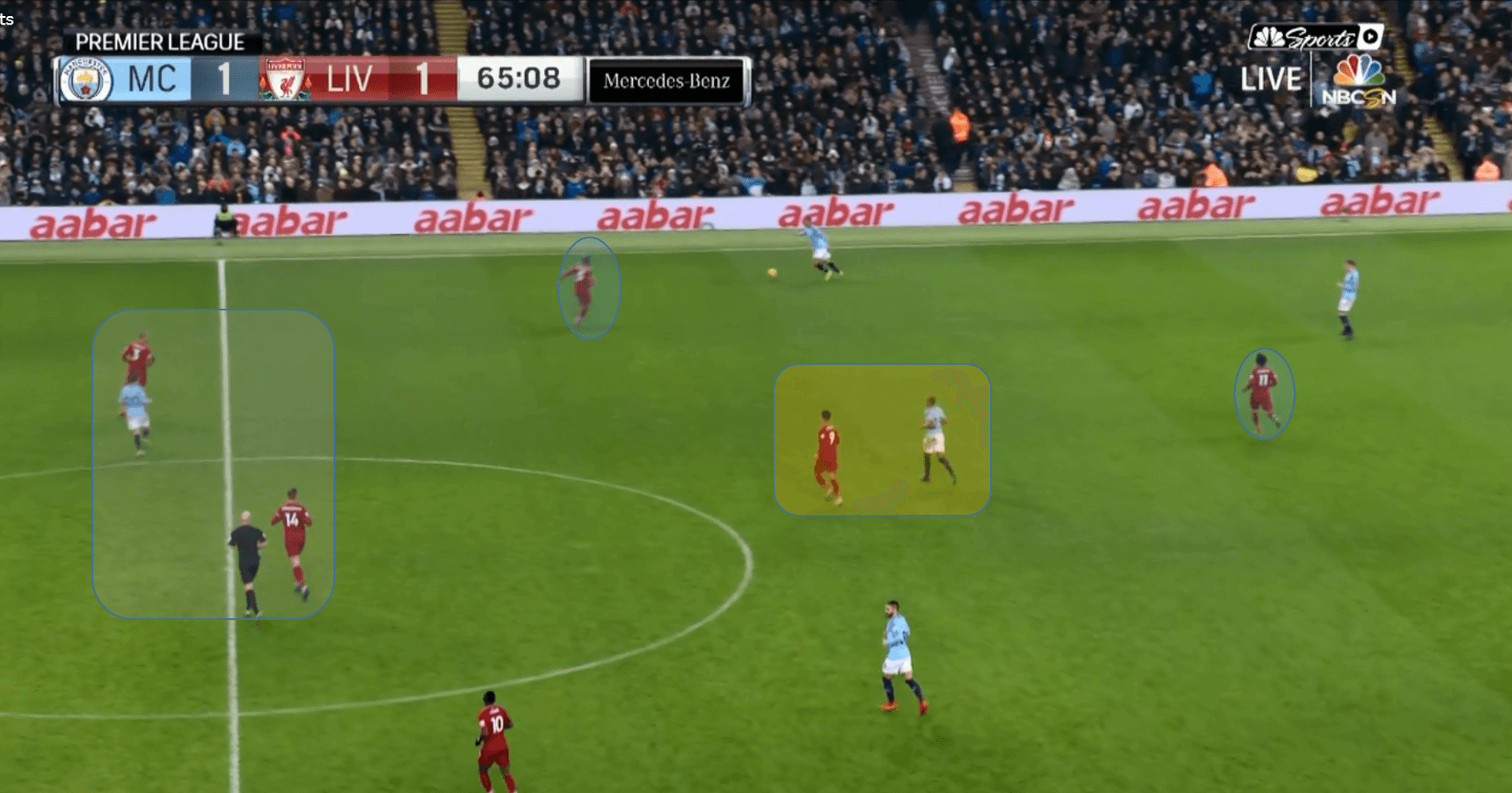 The adjustment to the double pivot provided instant defensive stability in closing off space between the lines. Liverpool’s front four were able to put more pressure on the Manchester City defenders. Their midfield greatly reduced the amount of chasing that they saw in the first half.

The attacking benefit to the Fabinho substitution and formation change was Liverpool’s ability to get both of their outside-backs up into the attack during the buildup. The image below shows both full-backs high up the field joining the attack during the buildup. Fabinho and Henderson are sitting in the double pivot allowing support. This attacking benefit pays immediate benefits. 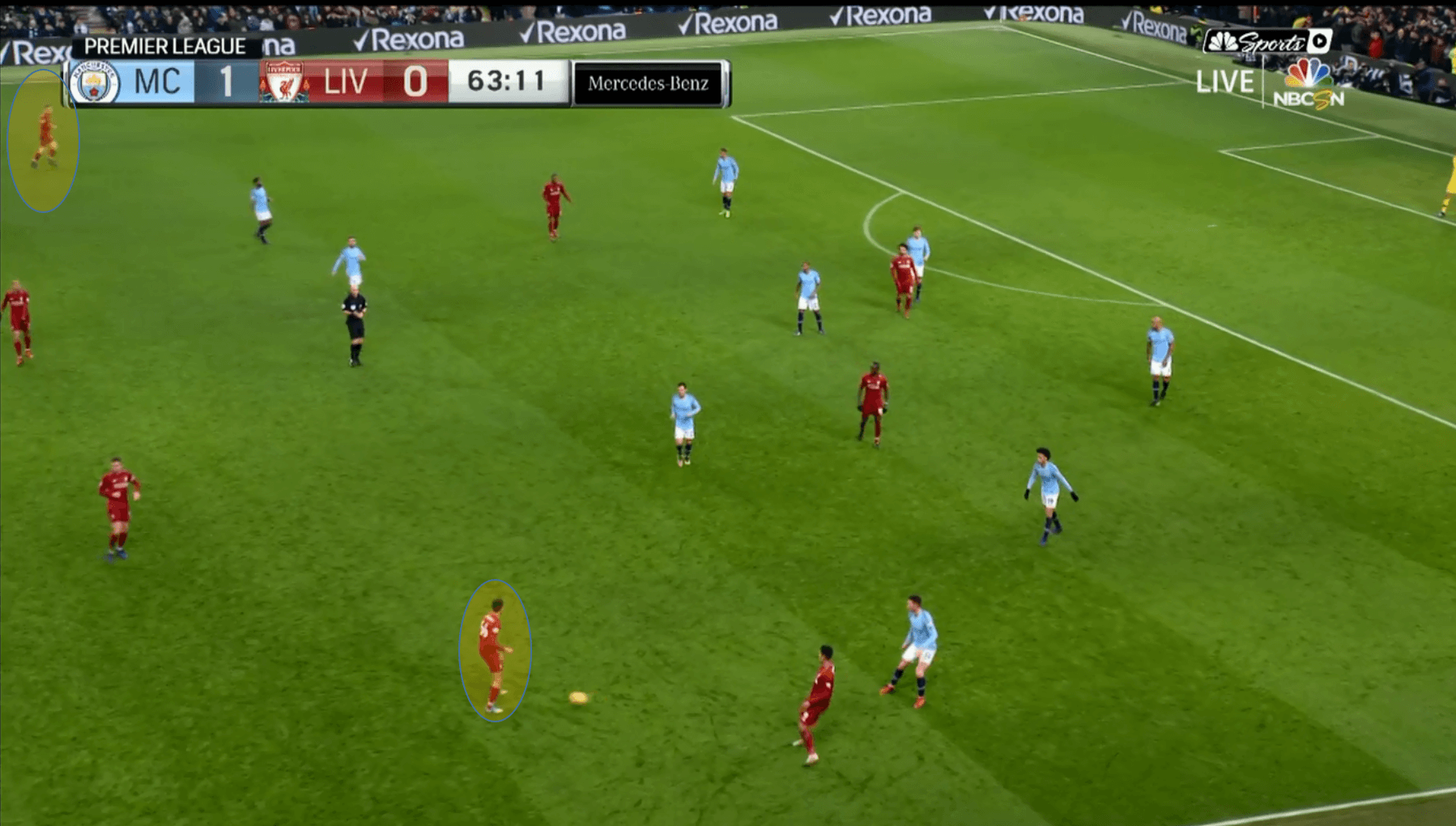 Below we see Wijnaldrum make a run inside. This movement clears space for Trent Alexander-Arnold to play a long diagonal to the opposite full-back Andrew Robertson. Robertson receives the long diagonal pass and quickly switches the ball through the double pivot of Fabinho and Henderson back to Alexander-Arnold. Liverpool immediately execute the same movement with Wijnaldrum making a run inside to create space for a long diagonal ball over the top from Alexander-Arnold to Robertson. 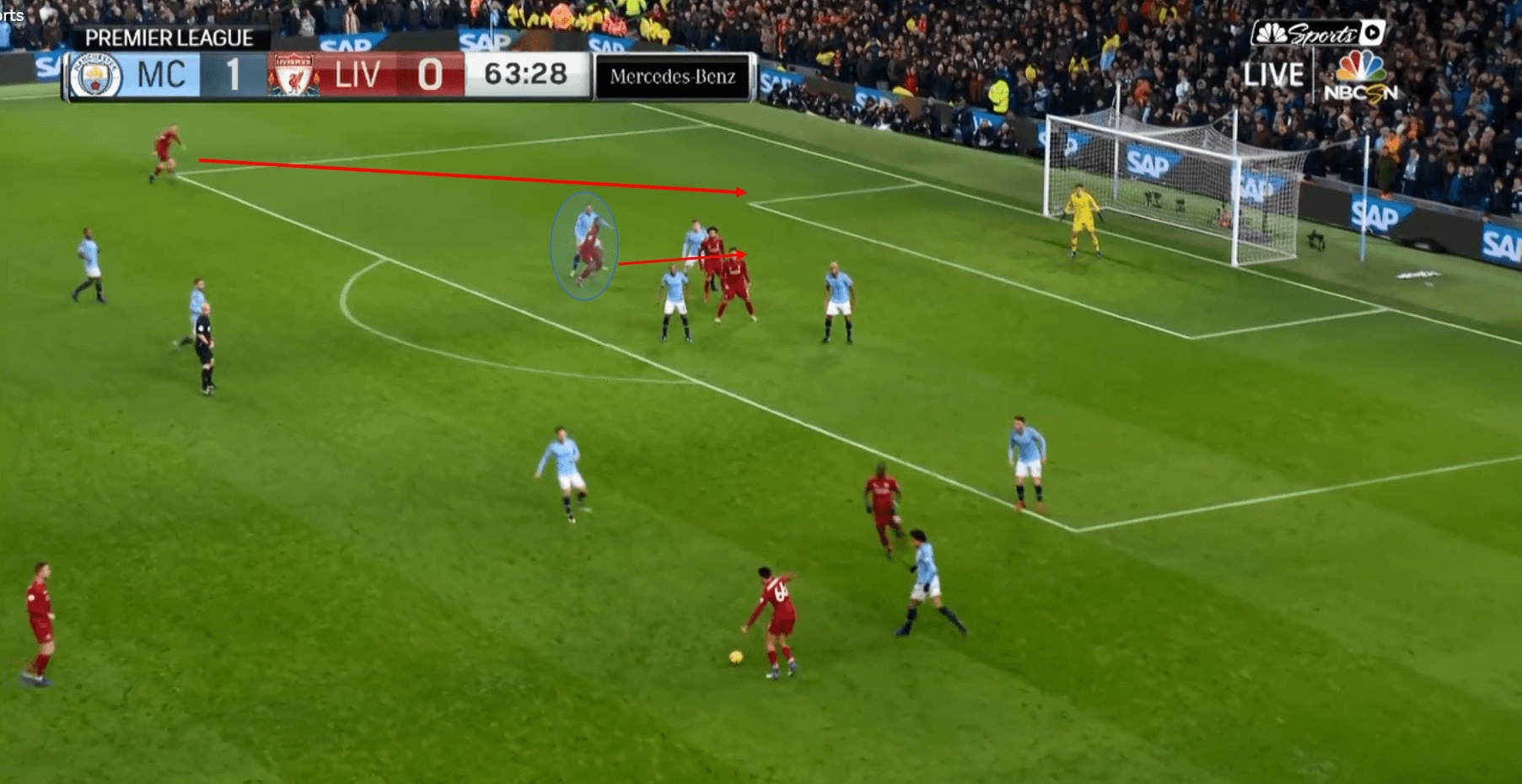 Robertson applied a special touch to leave Firmino all alone for the finish. 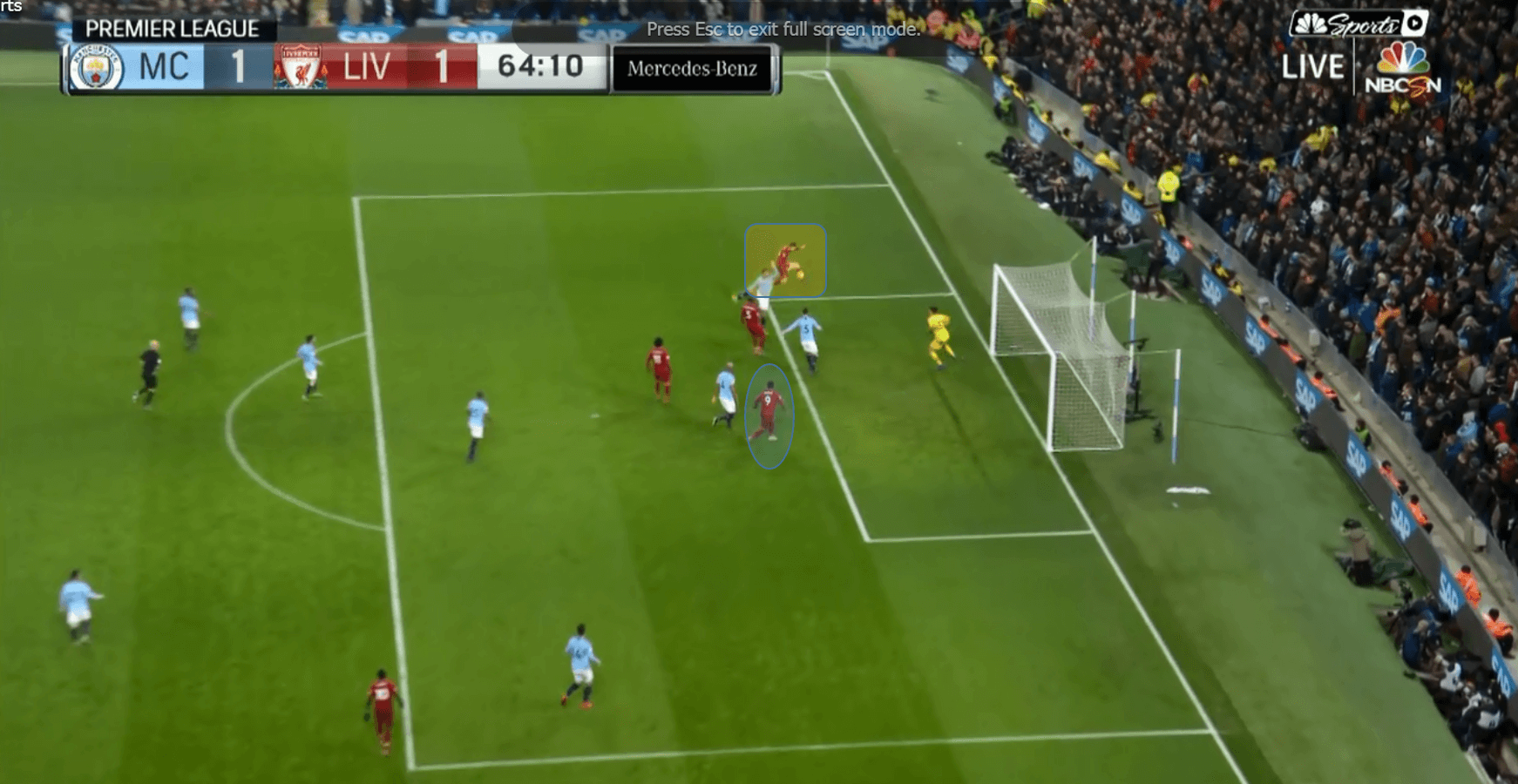 The game decider came down to a great penetrating pass by Danilo to Sterling. Sterling found space off the shoulder of Robertson. Liverpool tactically is balanced in their 4-2-3-1, but Robertson loses Sterling for a split second, assuming Sterling had strayed offside. 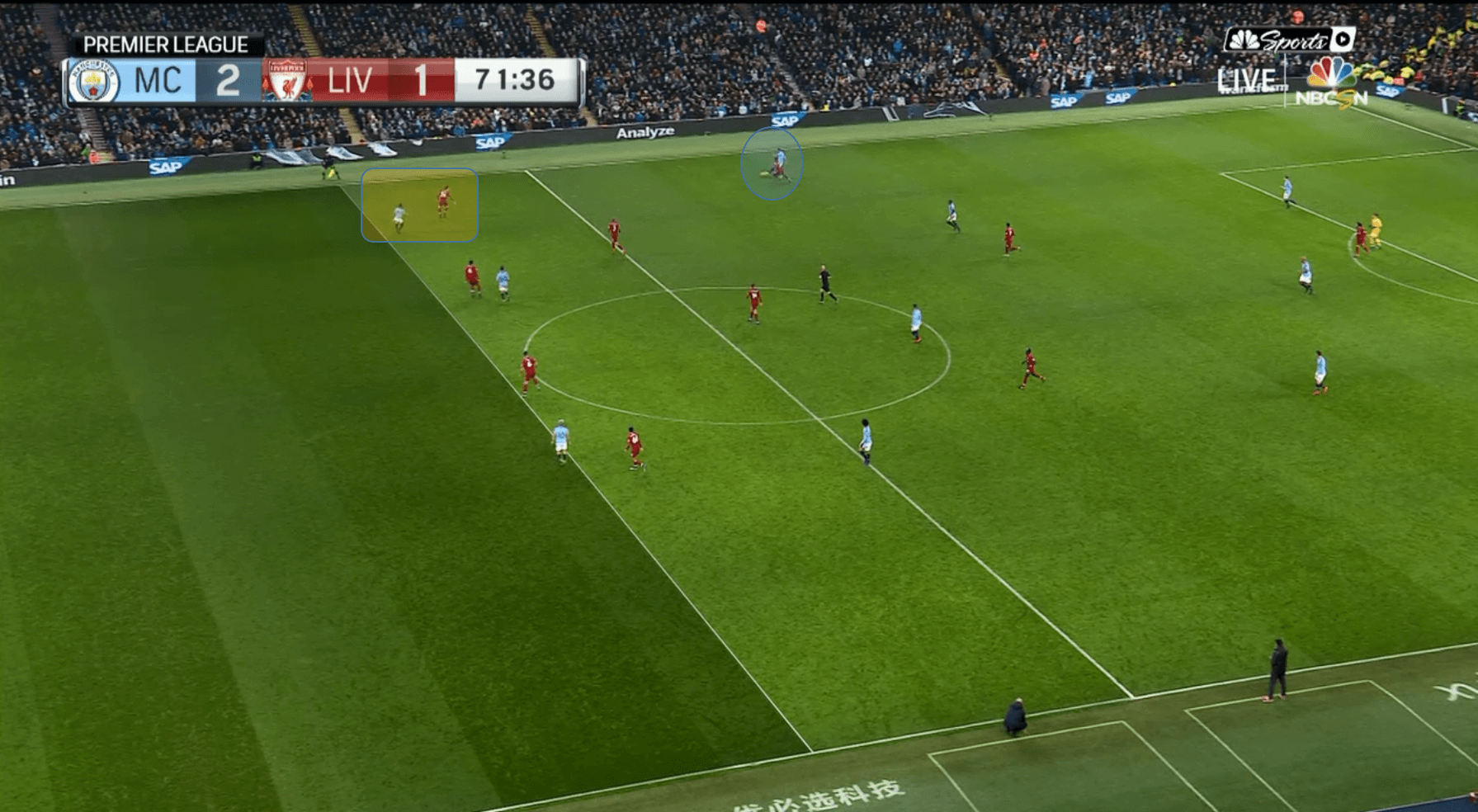 Sterling makes a play attacking across the backline. Aguero takes Alexander-Arnold inside with a great dummy run opening up a clear path for Sane for the winner.

The second half substitution of Fabinho combined with the tactical adjustment for Liverpool to go to a double pivot in midfield paid instant dividends.  The release forward of the full-backs swung the pendulum back in Liverpool’s direction. After the break, Liverpool enjoyed a 59% to 41% possession advantage. The full-backs’ ability to stretch out the compact Manchester City defence brought momentum to Liverpool.

Ultimately the game balanced out tactically with Liverpool managing four shots on target to City’s three. Possession for the entire game was 51% to 49% in favour of Liverpool. The game lived up to its billing and was decided by individual players making the big plays.