Liverpool’s back four this season has emerged as one of the best in Europe, with Liverpool conceding the least amount of goals in the Premier League so far this season. Virgil van Dijk has deservedly been given massive credit along with Liverpool’s full-backs, but Joël Matip has performed consistently well over the course of this season and is starting to finally show the kind of form expected of him in a Liverpool shirt.

In this tactical analysis, I’ll show you Matip’s main weakness and how he has improved on it and highlight his importance in this Liverpool team.

Much like Van Dijk, Matip is comfortable and can play long passes over the top to Liverpool’s front three when needed, as he demonstrated against Southampton last Friday. Matip’s ability on the ball is what sets him apart from Dejan Lovren.

Being able to play both Van Dijk and Matip against teams with a deep block has meant that both can pick line-breaking passes to help Liverpool advance. We can see below that when teams sit deep and concede space, Matip can combine well with Firmino and allow Liverpool to advance up the pitch.

Another key feature of his play is his dribbling from the back. This also allow for lines to be broken and often results in good opportunities for Liverpool, as the whole midfield unit can be taken out by Matip’s run leaving Liverpool’s front three to make runs in behind like below.

Matip is a centre-back who isn’t afraid to step out of the backline and go tight with a striker. Earlier in his Liverpool career this repeatedly caused him problems, as he often stepped out and didn’t win the ball.

This is a risky way of defending because as we can see below, if Matip steps out and doesn’t win the ball, teams can exploit the large space in behind. However, if Matip can win the ball as he does on occasions, Liverpool can regain possession.

Again, below we can see Matip is drawn out of position by Lukaku, leaving a large space for Rashford to attack into. If Matip had held off from pressing Lukaku and allowed a midfield player to press, Liverpool would have been in a much better shape to defend the counter-attack

If Matip is able to completely remove this from his game and start to either be less aggressive in the pressing strikers, or better, win more of his duels with the striker, teams will struggle to find a weak point in Liverpool’s defence. This was the case for Bayern Munich, who put Lewandowski up against Matip with the hope of creating space for runners in behind.

However, Matip had arguably his best game for Liverpool that night despite scoring an own goal. This was because of his duels with Lewandowski, where he remained tight and won the ball or fouled Lewandowski. This prevented Bayern from advancing into any space, as we can see below where Matip wins a duel with Lewandowski by remaining tight.

Below, Matip goes tight with Lewandowski to cover Alexander-Arnold who is also often a target of opposition attacks. Matip’s body positioning ensures Lewandowski cannot make a run inside, therefore making it easy for Matip to win the ball back. 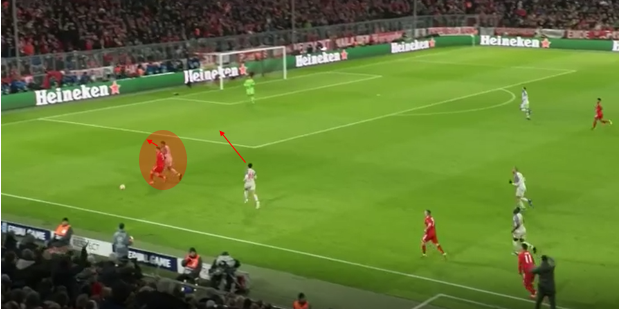 At 6’5″ tall, it is to be expected that Matip is going to play an integral role in Liverpool’s set pieces, particularly defensively. We can see below that within Liverpool’s man-to-man and zonal marking system, Matip occupies an important zone at the near post which often leads to him making clearances.

Liverpool’s strongest players in the air – Matip, Firmino and Van Dijk – all mark zonally. This hinders the opposition’s ability to play the ball into a dangerous zone of the box, as teams will often look to avoid areas where these players are.

Again, with the corner delivered from the opposite side, Matip occupies the same zone and makes a clearance.

Having struggled with injuries in the earlier part of his Liverpool career, Matip is starting to show a good run of form. He has been an often overlooked but important part of Liverpool’s impressive defence this season.

He is still prone to errors but is starting to cut these out, and will now face healthy competition from the returning Joe Gomez for a spot in Liverpool’s backline. That Klopp was forced to rest him against Porto in the Champions League because of the number of games he has played recently is testament to how far he has come on this season.