How timid Düsseldorf paid the heavy price against Bayern

Bayern Munich made a major statement last week when they thrashed rival title contenders Borussia Dortmund 5-0 at the Allianz Arena. The win surged the Bavarian club to the top of the table on points for the first time since late September 2018. This past weekend, Bayern put on another dominant display as they demolished Fortuna Düsseldorf 4-1 at the Merkur Spiel-Arena.

An early brace by Kingsley Coman, followed by goals from Serge Gnabry and Leon Goretzka, all added to Bayern’s impressive scoring streak now up to 27 goals in just their last six league matches. The tactics that manager Niko Kovač utilised were simply overwhelming for Düsseldorf. 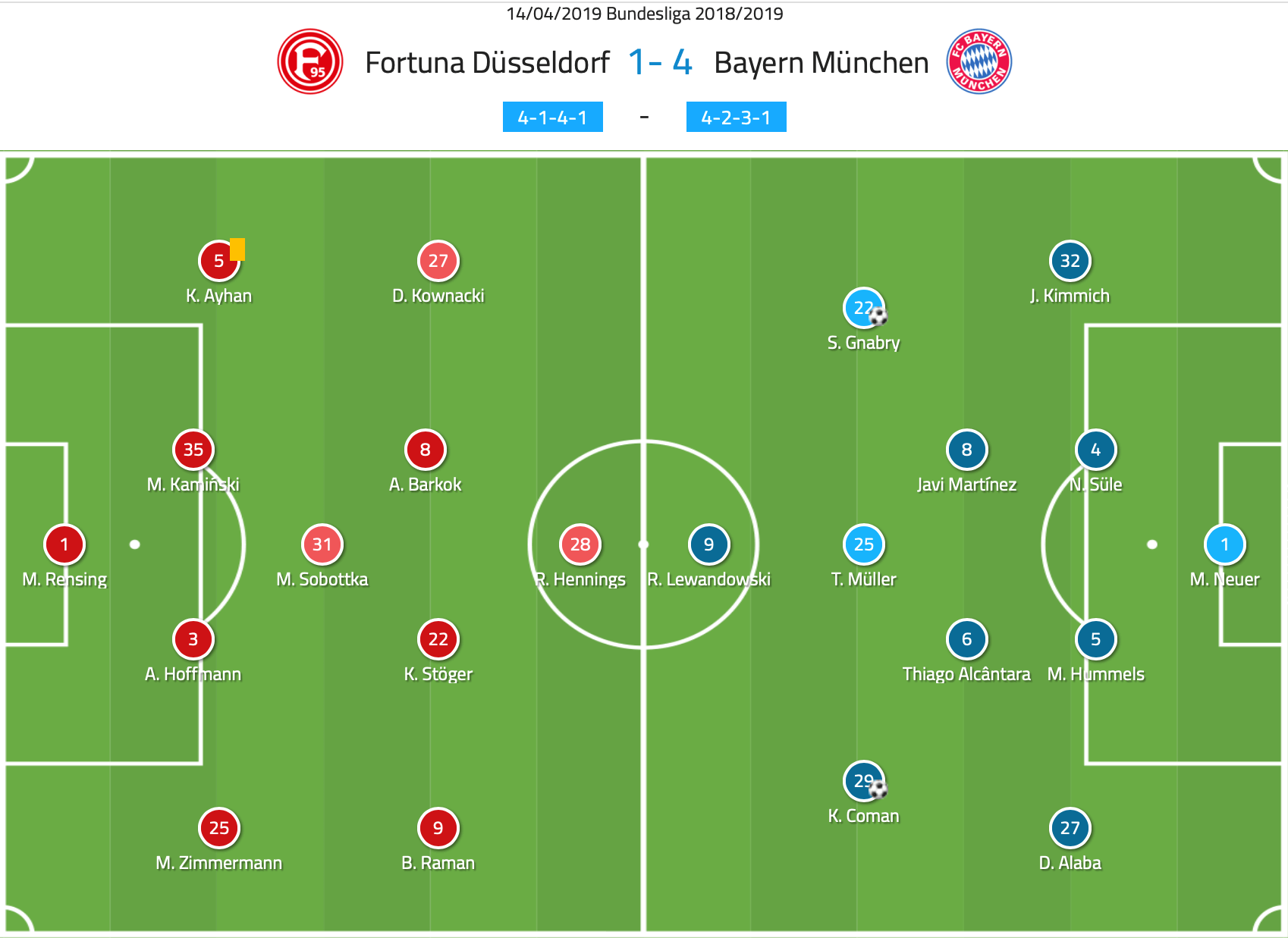 Düsseldorf came out in their common 4-1-4-1 formation. Joint-top scorer Dodi Lukebakio began the match on the bench after a poor performance in his last match, despite scoring a stunning hat-trick against Bayern the last time these two clubs met. Fellow Belgian wide attacker Benito Raman has notched three goals and two assists in his last three matches, and was looking to continue his form against a side not impermeable to Düsseldorf’s counter-attacks.

Kovač meanwhile sent out an unchanged XI from their victory against Dortmund. It appears as though, after a number of personnel changes and positional shifts throughout the season, the Croatian manager has found a group that can both possess and counter-attack in his balanced style of play.

The defending league champions came out strong in possession, controlling the ball from the back. The lack of pressing from the Düsseldorf forwards gave the backline both space to possess the ball high and time to make comfortable, effective passes forward.

The lack of pressure from Düsseldorf allowed Bayern to connect on an array of influences. Progression in possession often moved through the full-backs or Thiago. The linkup play from multiple levels of the back two lines for Bayern was established with ease. This in turn allowed planned runs and passes to take shape going forward.

Rotating the ball quickly to the opposite side of the pitch, also known as a switch of play, was a common tactic used by Bayern in this match. Düsseldorf essentially chose to take their chances defending in their own half, which Bayern took advantage of.

Against Düsseldorf’s disorganised defence, Bayern were able to create and exploit space in the final third thanks to volatile movements from the wide players. Wingers Coman and Gnabry, raumdeuter Thomas Müller, and Robert Lewandowski all showed high football IQs in their attacking play.

For Bayern’s second goal, when Gnabry turned with the ball to look forward, you can see that he already has the vision of the goal in place. He completes a pass to Kimmich, who is open down the right touchline thanks to the compact defence.

Despite not scoring in this match, Lewandowski still had a strong performance, tallying five shots and consistently pulling defenders away from his teammates. It is this organised, highly intelligent team attacking that the German giants have prided themselves on in the past, and recent signs point to that style of play returning to the top of the Bundesliga.

In attack, Düsseldorf’s plan was similar to the previous meeting: counter-attacking behind Bayern’s high backline. This was attempted throughout the match, though they often faltered for a number of reasons. 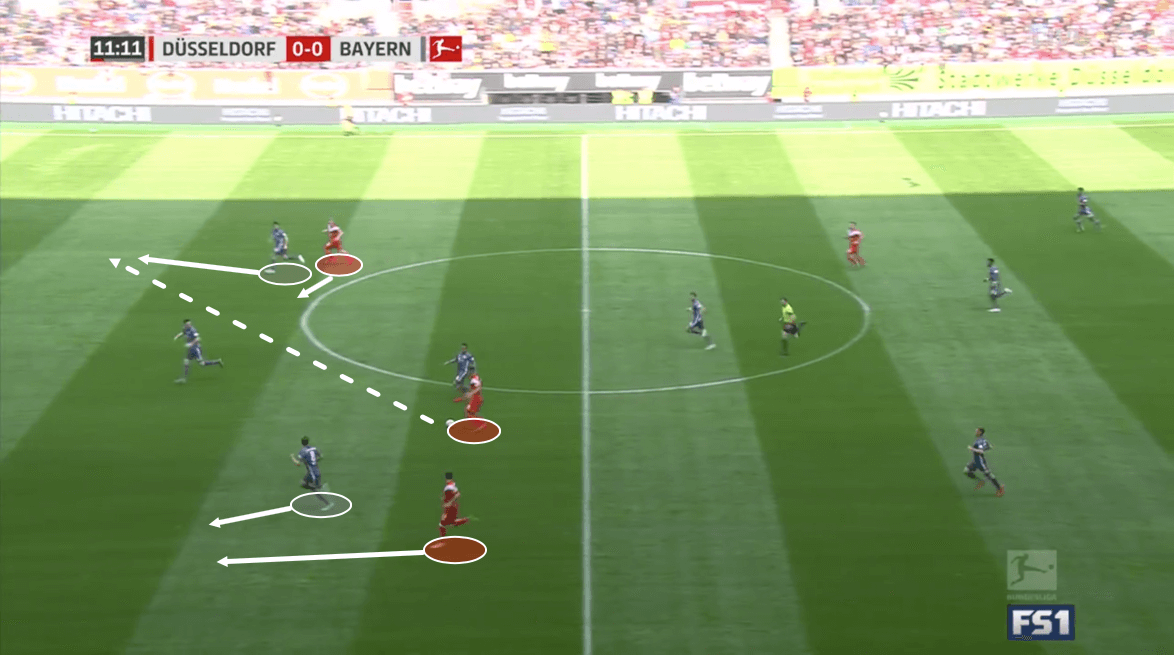 This counter-attack ended on a miscommunication, with the intended target cutting inside the defender instead of outside. Also notice the Bayern defenders limiting the possible outlets in their cover shadows.

After Lukebakio was subbed on, Düsseldorf’s counter-attacks became more direct. This diminished the time Bayern had to organise defensively, although they still were effective at limiting Düsseldorf in the half-spaces thanks to Martínez and Thiago.

Ultimately the match was a lopsided one. Bayern’s strong defending led to mostly inaccurate Düsseldorf attacks, and at the other end the home side’s lack-of-pressure defending couldn’t contain Bayern’s individual skills and space-focused movements from the midfield into attack.

Düsseldorf put up a sound but erroneous effort. The North Rhine-Westphalia club however are surely safe from relegation after being promoted to the Bundesliga at the end of last season. The players, coaches, and supporters should be proud of the way Düsseldorf have fought to exceed expectations, which has included upset wins against Dortmund and Borussia Mönchengladbach.

This dominating win kept Bayern at the top of the table and extended their current league unbeaten streak to nine matches.The excellent balance in situational tactics executed by Kimmich, Thiago, and the two wingers is proving effective down the final stretch of the season. With their four remaining league matches coming against the bottom two teams in the league followed by the fourth and third place teams, Bayern are heating up at the right time to retain their Bundesliga throne.