Sergio Lobera vs Csaba László was always supposed to be an exhilarating affair and it did not disappoint. Chennaiyin FC looked to be a better team throughout the match. However, Mumbai City took home all three points. Chennaiyin registered 3.21 xG compared to Mumbai City’s 1.44.

In this tactical analysis, we will analyse the tactics and intricacies of both the managers. This analysis of the high-voltage Indian Super League fixture would also delve into the reason why Mumbai City could manage a relatively smaller xG compared to other games. 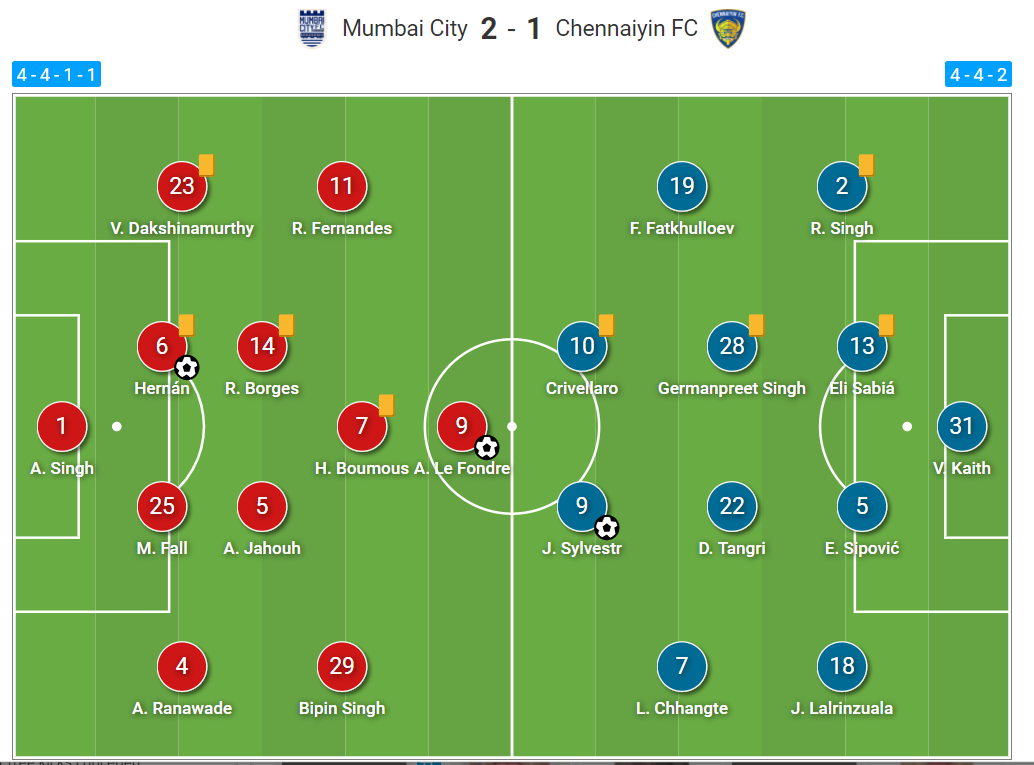 Csaba László has used two formations this season, 4-1-3-2 and 4-2-3-1. He preferred the latter in this fixture. Though on paper, the formation reads 4-4-2, Rafael Crivellaro operated behind Jakub Sylvestr, making it 4-2-3-1. Anirudh Thapa was a huge miss in this game, as he was injured against Bengaluru FC. Germanpreet Singh replaced the youngster in the middle of the park. The only other change was Fatkhullo Fatkhuloev in place of Isma.

Mumbai pressed Chennaiyin high in a 4-4-2 man-oriented zonal marking. In man-oriented zonal marking, the reference point is the opponent. Players position themselves flexibly in their respective base positions with closer access to their respective opponents. Even though in this method, the reference point is the opponent, the main focus is the access space and access distance.

Mumbai defended in three defensive lines. Hugo Boumous moved up to pair Adam le Fondre in the first line of defence. Both the players pressed the opposition in a pendulum pressing structure. When one opposition centre-back (CB) passes the ball to another, the pressing is triggered with one player pressing the ball-carrier CB keeping the pivot in his cover shadow and another closely following the pivot. The other players marked the opposition players closer to their base positions. 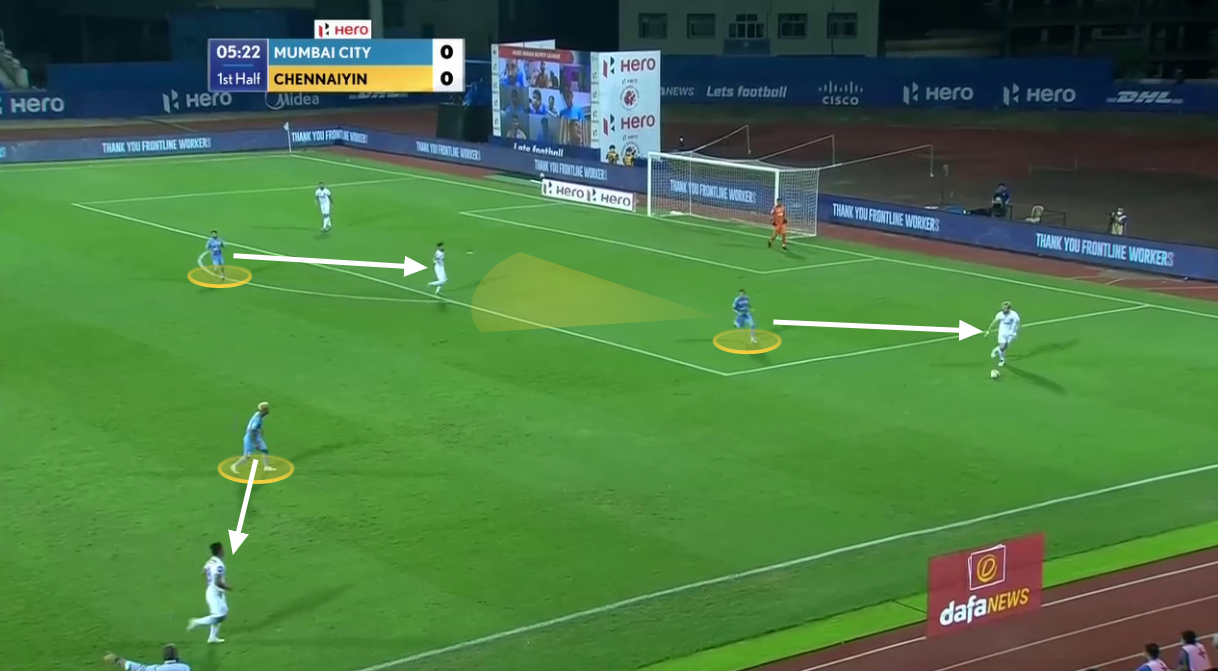 Chennaiyin played in a double pivot but Deepak Tangri always dropped deep to make it a three/five-man backline. Why three or five? It’s because Chennaiyin did not always instruct their full-backs to position high when Tangri dropped deep. In the above image, you can see Tangri dropping deep to create a three-man backline. Once Eli Sabiá (RCB) passed the ball to Enes Sipović, the pressing was triggered with le Fondre pressing the ball-carrier and Boumous shifting along with his partner to keep a close tab on Tangri.

The entire structure of Mumbai’s pressing can be vividly understood by the image below. Each and every other player kept a close distance with their respective opposition players. 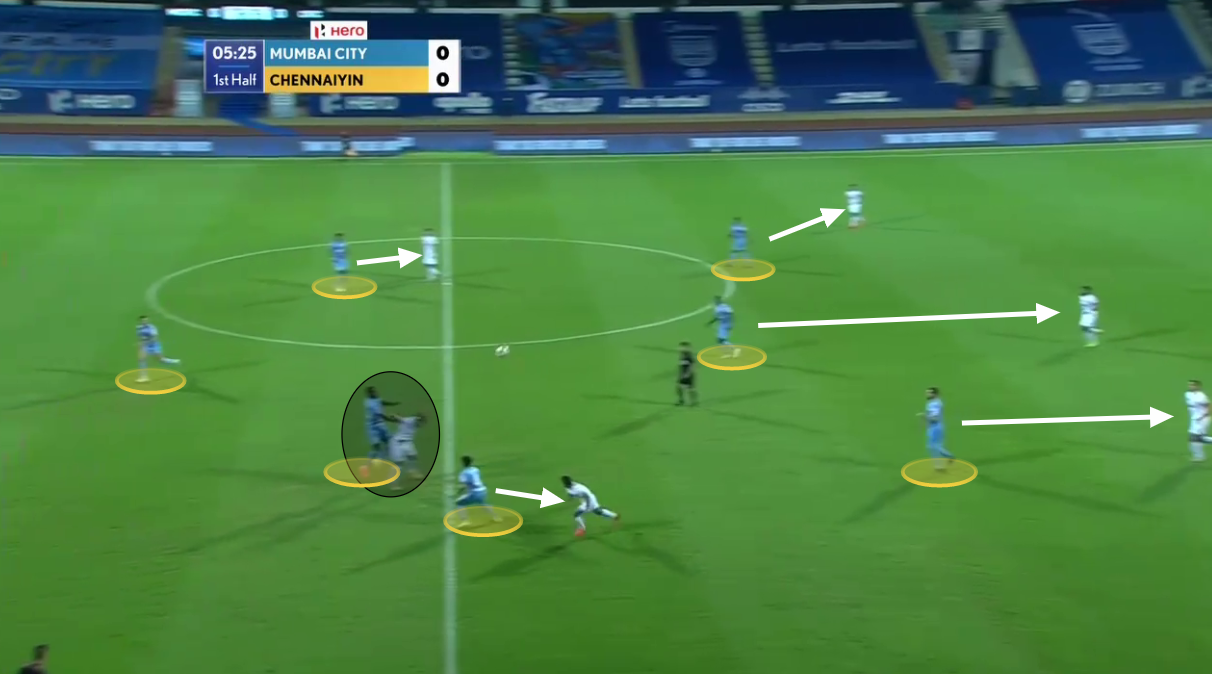 It’s basically, the first line pressing with a ‘-1’ and the last pressing line has a ‘+1’. In simple terms, Boumous and le Fondre has three-man to cover and the last line of press consisting of four players also has three players to cover.

Even in the middle third, the same thing can be observed with the first line of press opting for pendulum press and others keeping a close tab on their respective opponents in the vicinity of their base positions and when the ball is passed to the full-back, the respective Mumbai winger presses the full-back and the ball-near striker tries to block the passing lane to the pivot, thus forcing the ball back to a centre-back. 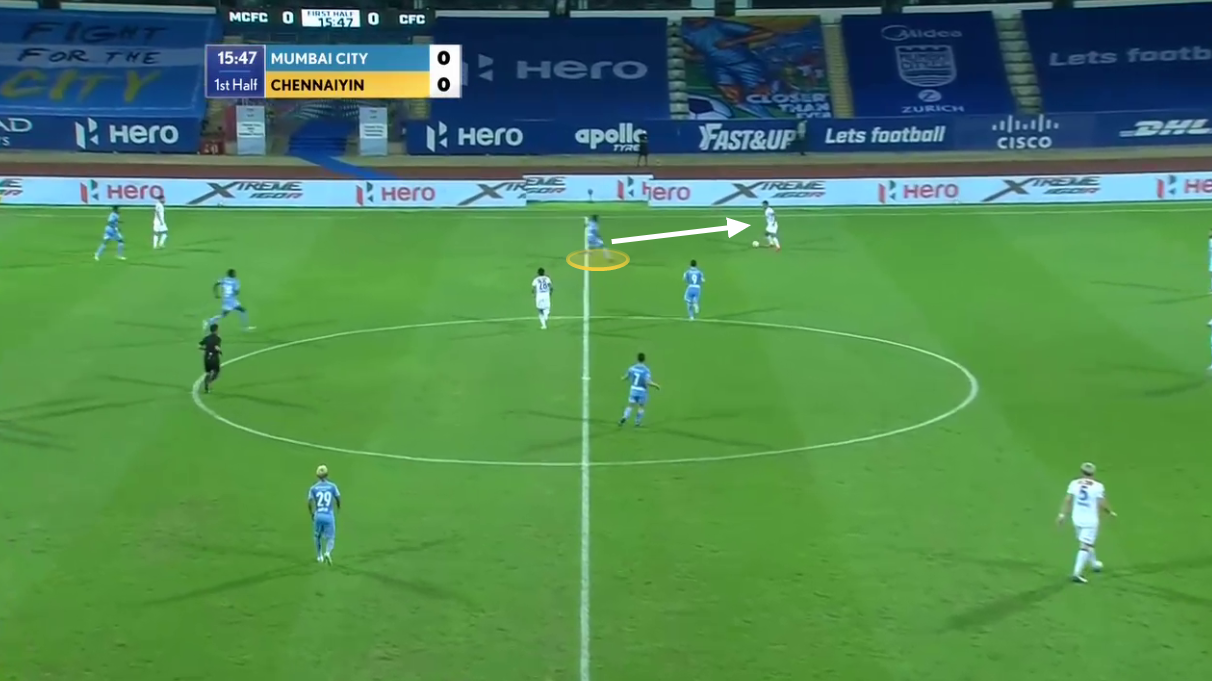 Here, Tangri passed the ball to the right-back and as soon as he did, Raynier Fernandes pressed the right-back and le Fondre looked to prevent the passing lane to Germanpreet Singh (pivot). This image also shows the positioning of the full-backs. They are not positioned higher making it more of a five-man backline.

Even when Germanpreet doesn’t give the option of a pivot, a similar pressing structure is maintained by Mumbai. 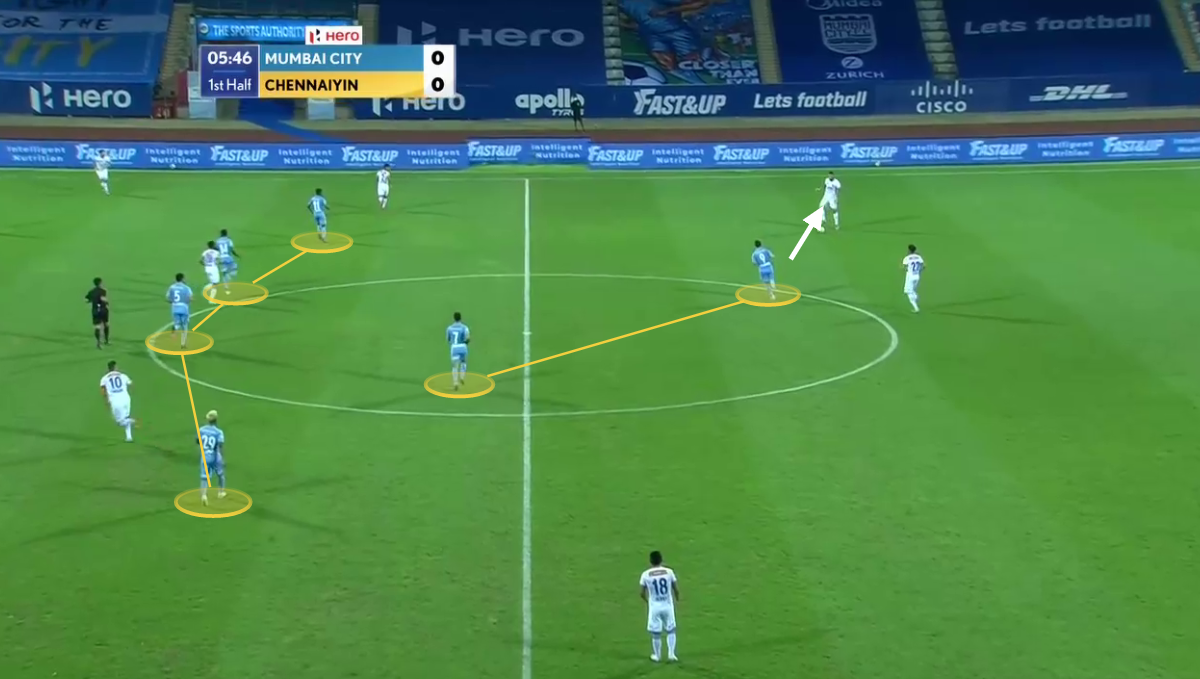 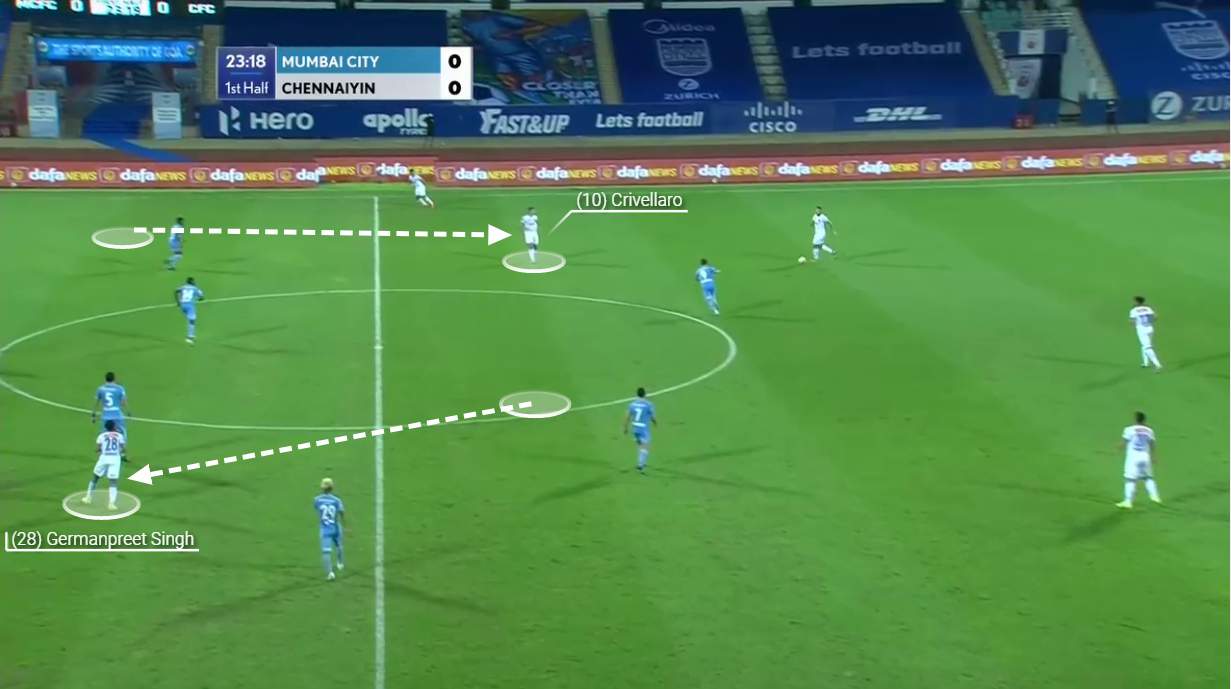 Here, as you can see, Germanpreet initially acted as the pivot and then moved higher parallel to Mumbai’s second line of defence and Crivellaro sneaked in to occupy a deeper position away from the first line of press.

Chennaiyin switched their game from one flank to the other with the help of the three-man backline. The main idea of the three-man backline was to free up space for one of the centre-backs to carry the ball and full-backs to move higher creating overloads and decisional crises on the flanks. As you can see in the image below. Most of the Chennaiyin attacks were through both the flanks, especially, the left (and also generated a massive 0.51 xG through positional attacks from the left flank). 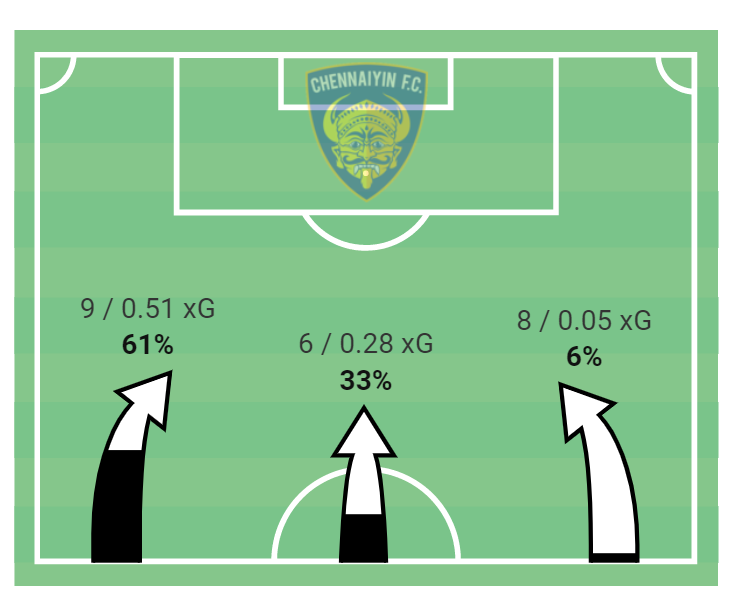 However, Mumbai’s defence stood up to the task on most occasions. Most of the times Boumous or le Fondre would find themselves in a pressing distance to the ball-carrier CBs and if the CBs are successful in carrying the ball, the Mumbai winger in the vicinity of the ball-carrier would press the centre-back. 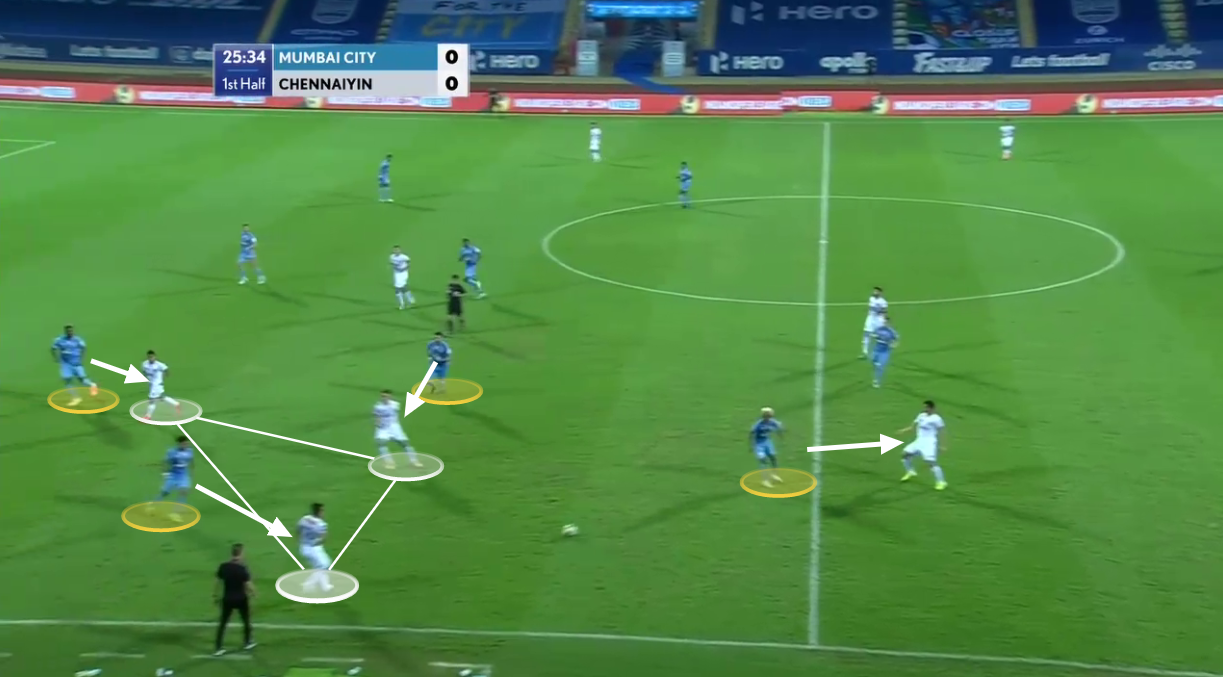 Here, Bipin pressed Memo (subbed in for the injured Sipović) and, Jerry Lalrinzuala, Lallianzuala Chhangte and the striker, Jakub Sylvestr formed a triangle on the left flank. As soon as Jerry received the ball from Memo, Amey Ranawade (RB) moved up to press him, Chhangte was ably covered by Moutada Fall and Ahmed Jahouh quickly moved to his right to press the Chennaiyin striker.

However, on a few occasions, Mumbai did get exposed. 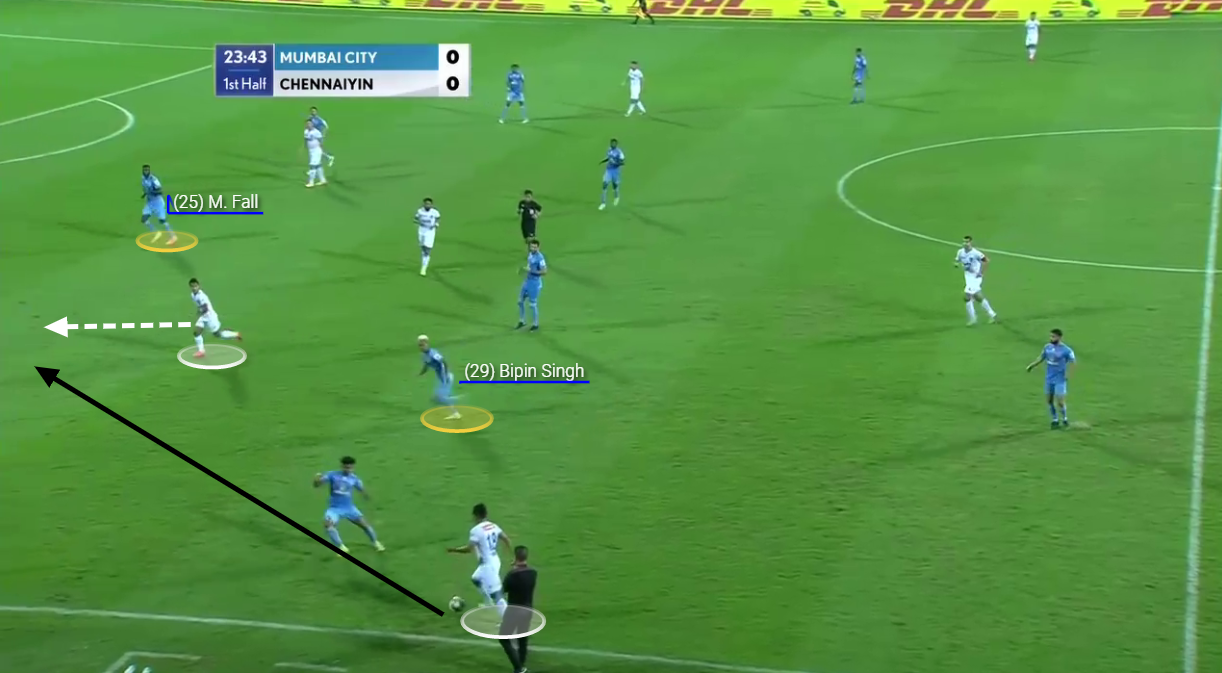 As you can see here, Ranawade made a similar movement and pressed Jerry. However, Fall did not move to his right to cover Chhangte this time as Sylvestr kept the height. Jerry passed the ball to Chhangte and Bipin Singh (RW) was grasping to cover the left-winger who initially was in a position to press Memo.

Generally, the Chennaiyin centre-backs did not carry the ball higher to the opposition half but with 25 minutes remaining and the scores still level, they were given more freedom, as well as Mumbai defence decided to engage in deeper positions 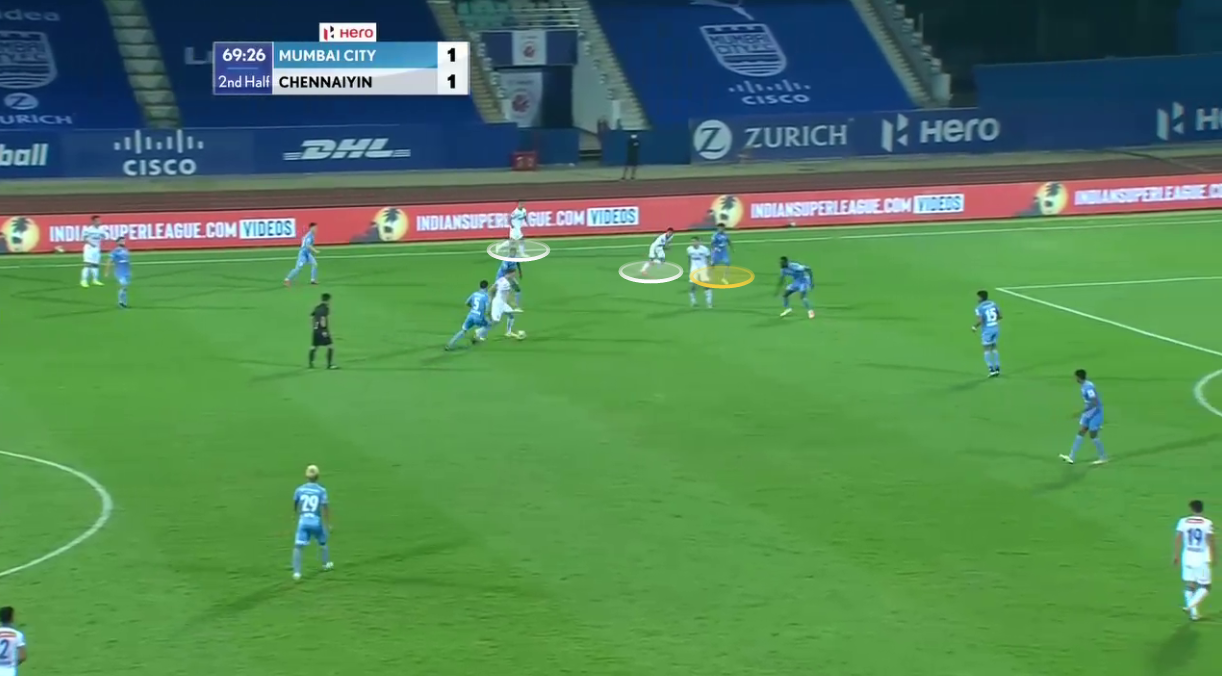 It created numerical superiority on the flanks. As you can see, Chhangte and Jerry created an overload on Ranawade but Chennaiyin failed to exploit Mumbai from this situation.

Chennaiyin, out of possession

Mumbai alike Chennaiyin created a three-man backline with Jahouh dropping to the backline. Rowlin Borges acted as the lone pivot in this situation.

Chennaiyin too pressed Mumbai in a 4-4-2 structure, creating three pressing lines with Crivellaro moving up to join Sylvestr. Chennaiyin pressed Mumbai in two ways, basically. One – The first line of press, pressing the ball-carrier CB as well as the player in ball-carrier’s vicinity and the other players marking their respective opponents closely. Similar to Mumbai’s ‘-1’,’+1’ structure. 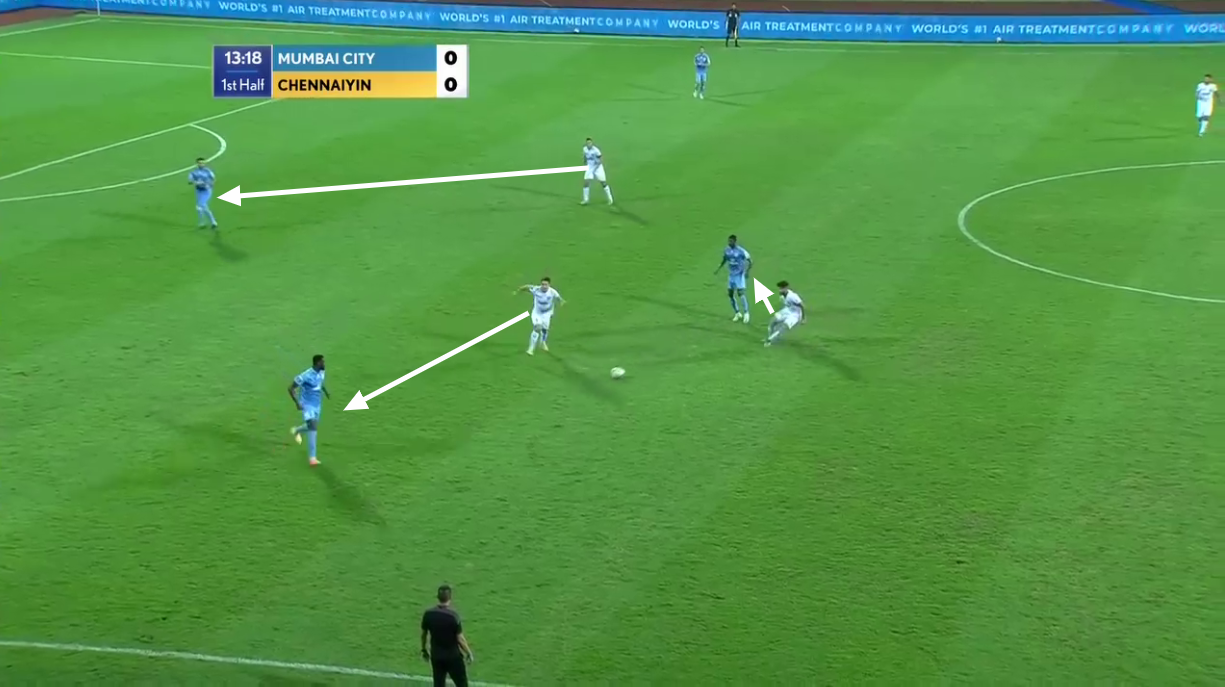 The other method was that the first line of press not engaging with Mumbai’s first line of build-up and rather keeping a close marking on the pivot, Borges. 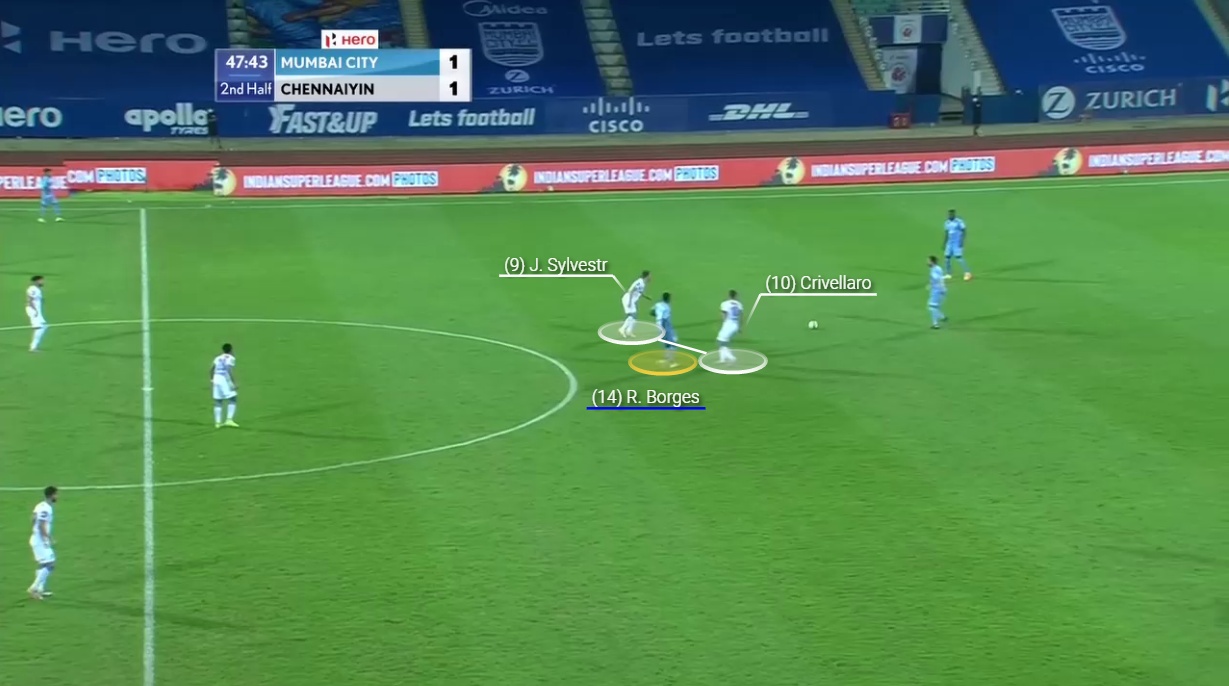 When that happened, Mumbai’s wide centre-backs got enough space and time to carry the ball. As soon as the centre-back would be on the verge of entering the opposition half, the Chennaiyin winger in the ball carrier’s vicinity would move up to press the CB. 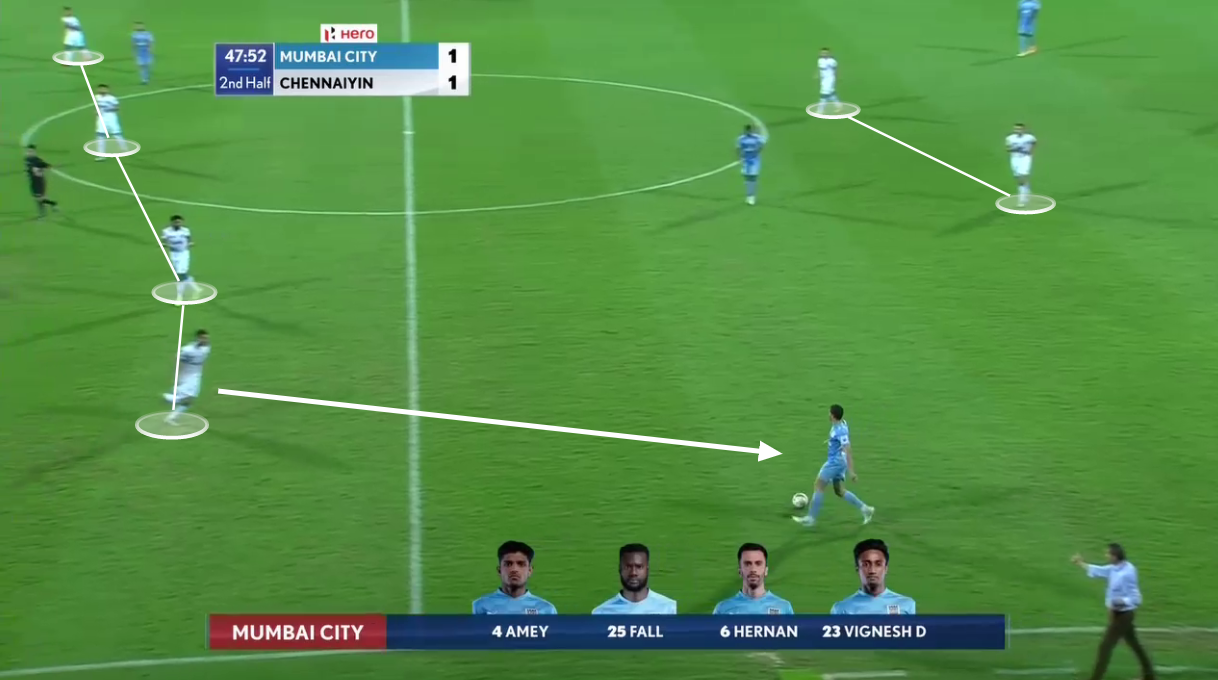 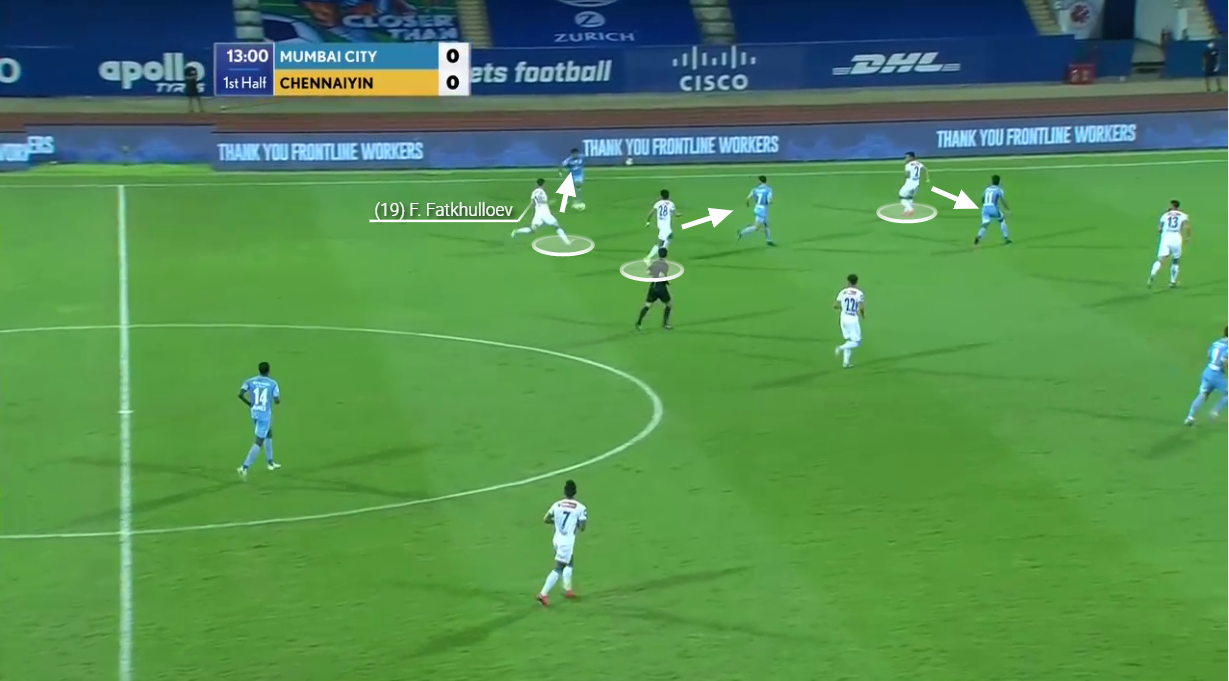 Chennaiyin were an excellent cohesive unit giving up only 0.59 xG to the opponents from the open play. However, their conundrum to defend the set-pieces on the night, let them down.

Hugo Boumous had a free role. He dropped deep, drifted to different spaces on the field to create overloads and decisional crises on the opposition. His heat map below shows how extensively he was used in the build-up. 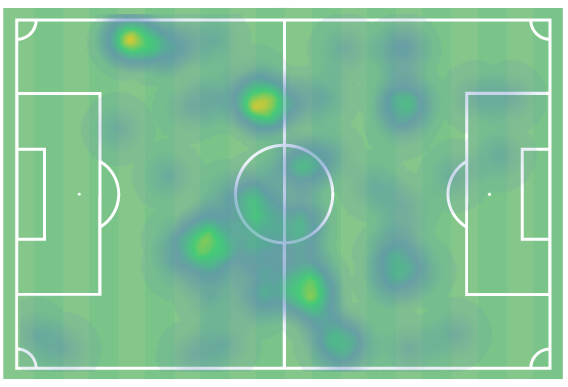 In the image below, you can see Boumous dropping deep to open up a passing lane for Fall. 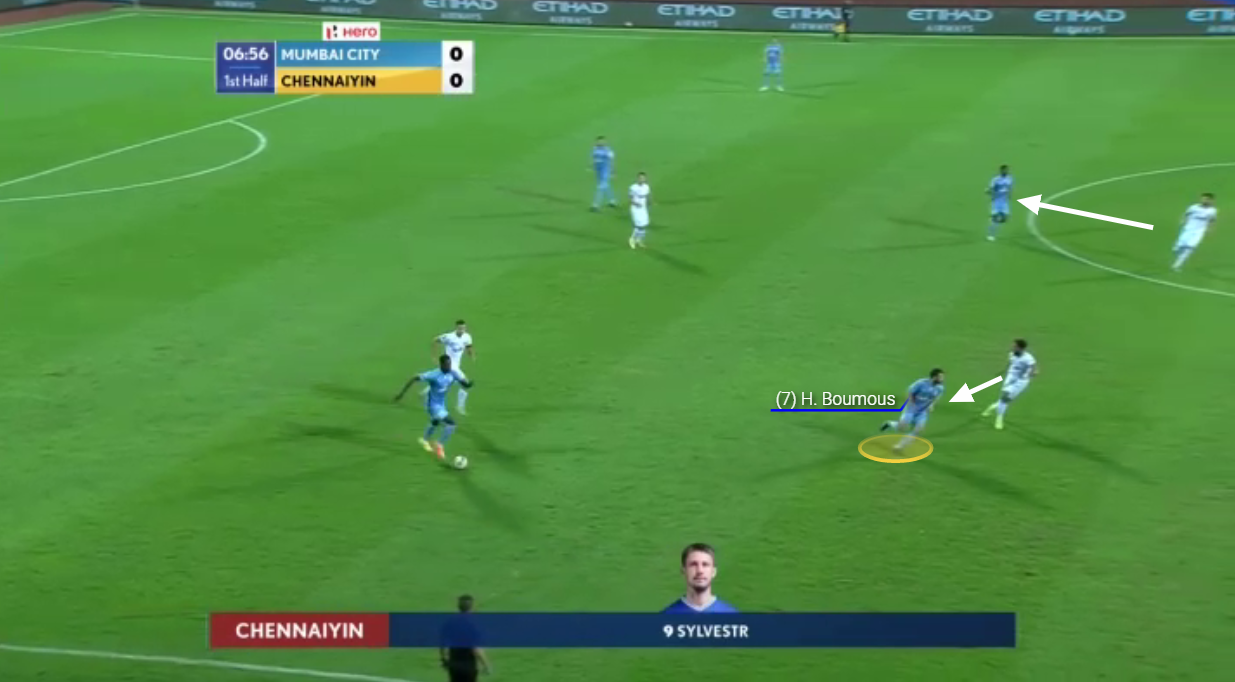 However, he was closely marked by Chennaiyin’s second line of press on most of the occasions.

The problem in pressing arose when Boumous dropped to the Chennaiyin first line of press, acting as the pivot along with Borges. 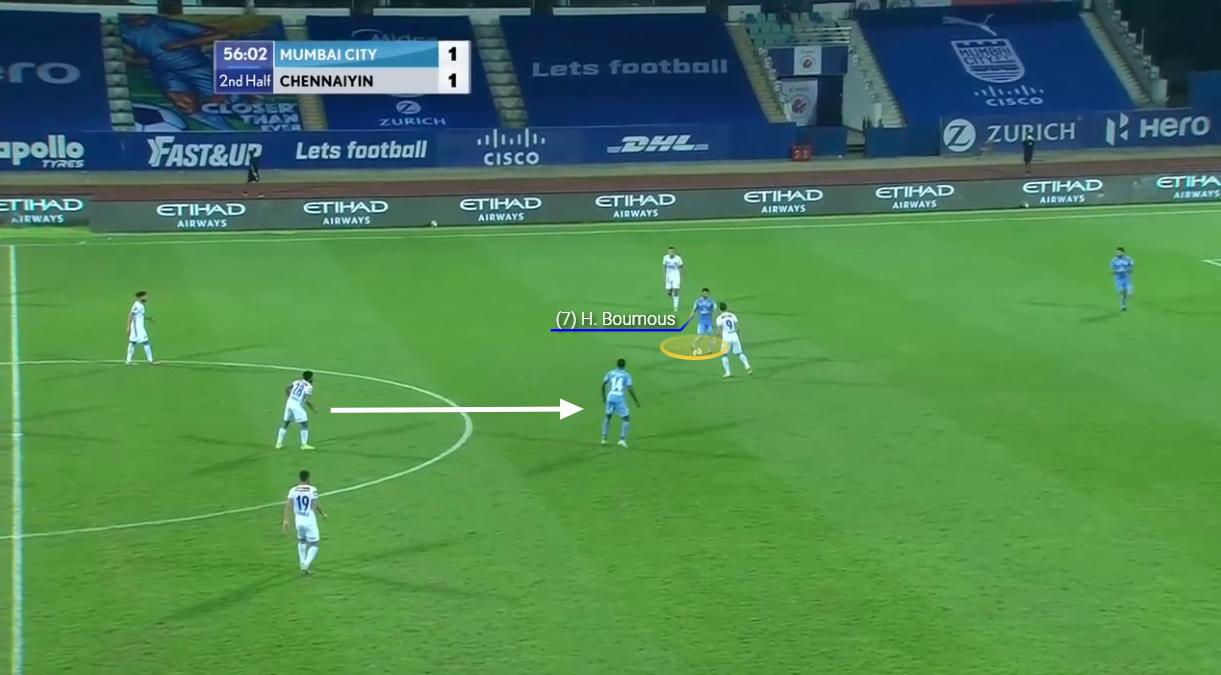 In the image above, you can see, the Frenchman is closely marked by Crivellaro and Sylvestr.

However, after participating in a bounce pass, he sneaked behind both the players unmarked. Jahouh again passed the ball to the Frenchman to progress the play. 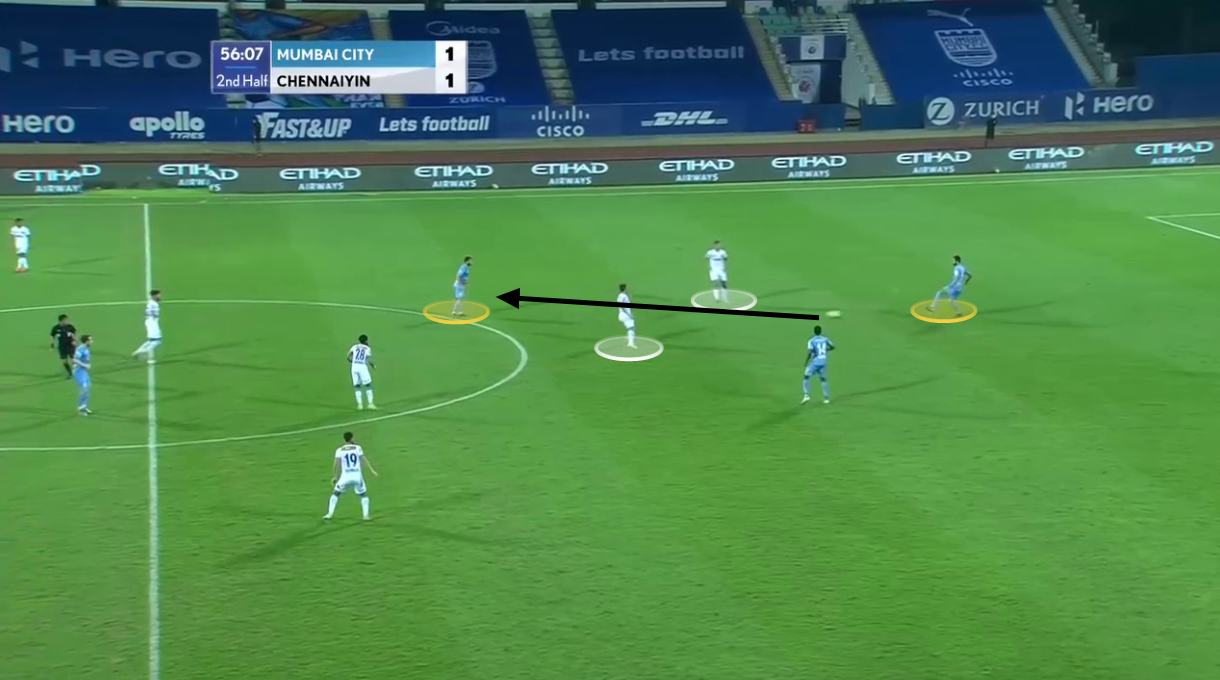 The pressing from the first line of defence was poor throughout the game, especially when both the players had to mark the pivot closely. The communication between both of the players was missing on occasions.

Rafael Crivellaro has been caught out on numerous occasions this season. He lacked awareness and decision making in this fixture too. 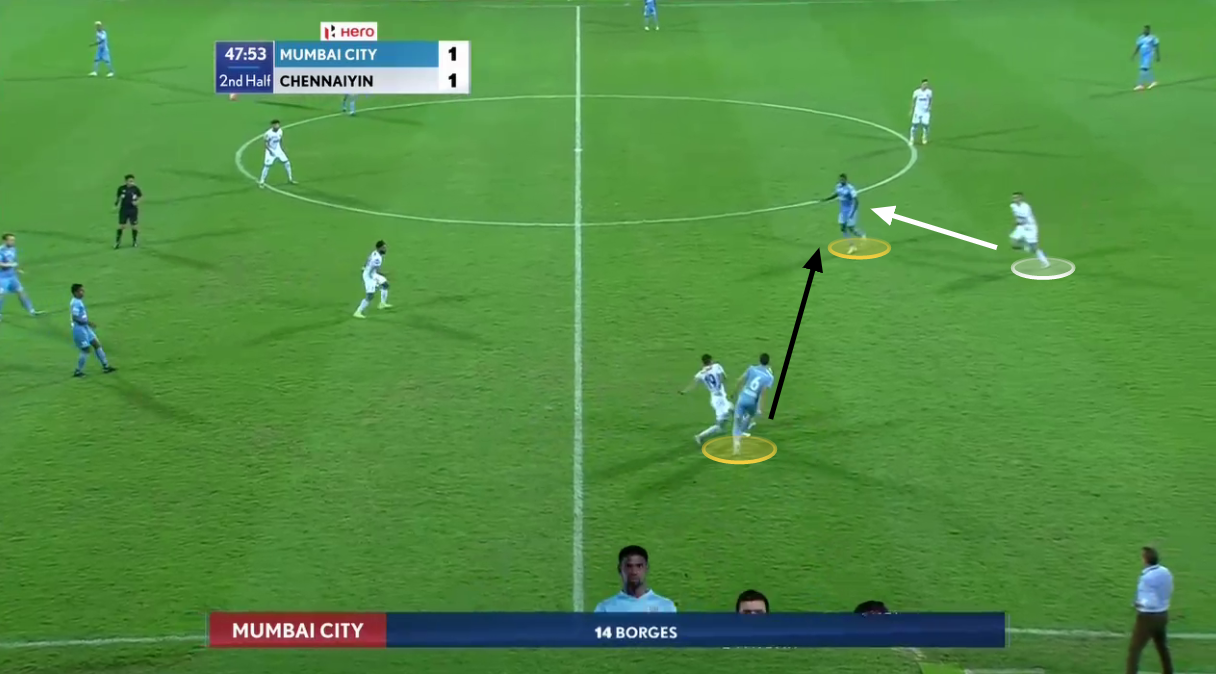 As you can see in the image above, He should have prevented the passing lane to Borges as both Sylvestr and Crivellaro was marking the pivot closely. However, Crivellaro was slow to react and Hernán Santana could easily pass the ball to the Mumbai midfielder.

However, the poor pressing from the Brazilian did not end here. 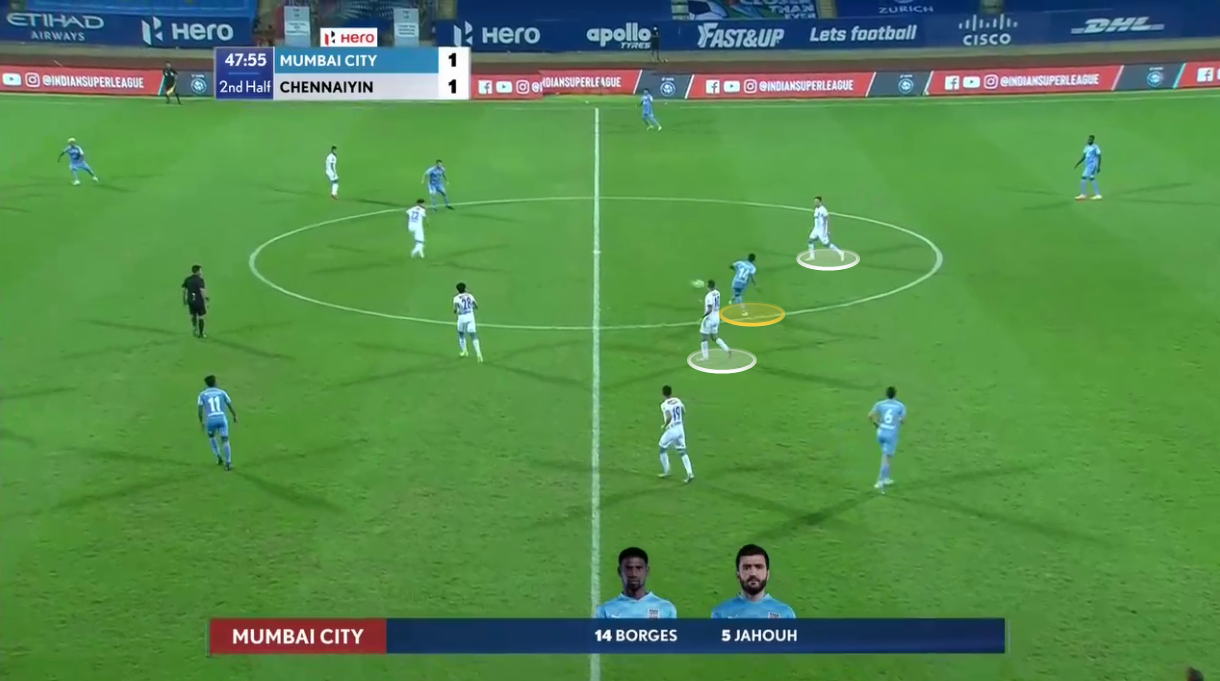 Once Borges received the ball, The Brazilian should have put pressure on the midfielder rather Borges switched the flank without any pressure. It would be wrong to singly point out Crivellaro in this instance. Sylvestr did not help the Brazilian in this instance either.

Mumbai’s movement in the opposition half

The three-man backline pushed the full-backs higher in the opposition half with Borges and the dropping Boumous acting as the connector between the defenders and the attackers. When Boumous was not required as the connector and Borges progressed the ball, Mumbai would find themselves in a 5 v 4 or 5 v 3 situation with Chennaiyin’s last line of defence. Le Fondre on most occasions would drop deep in between the lines and the wingers would keep the height in the half spaces. 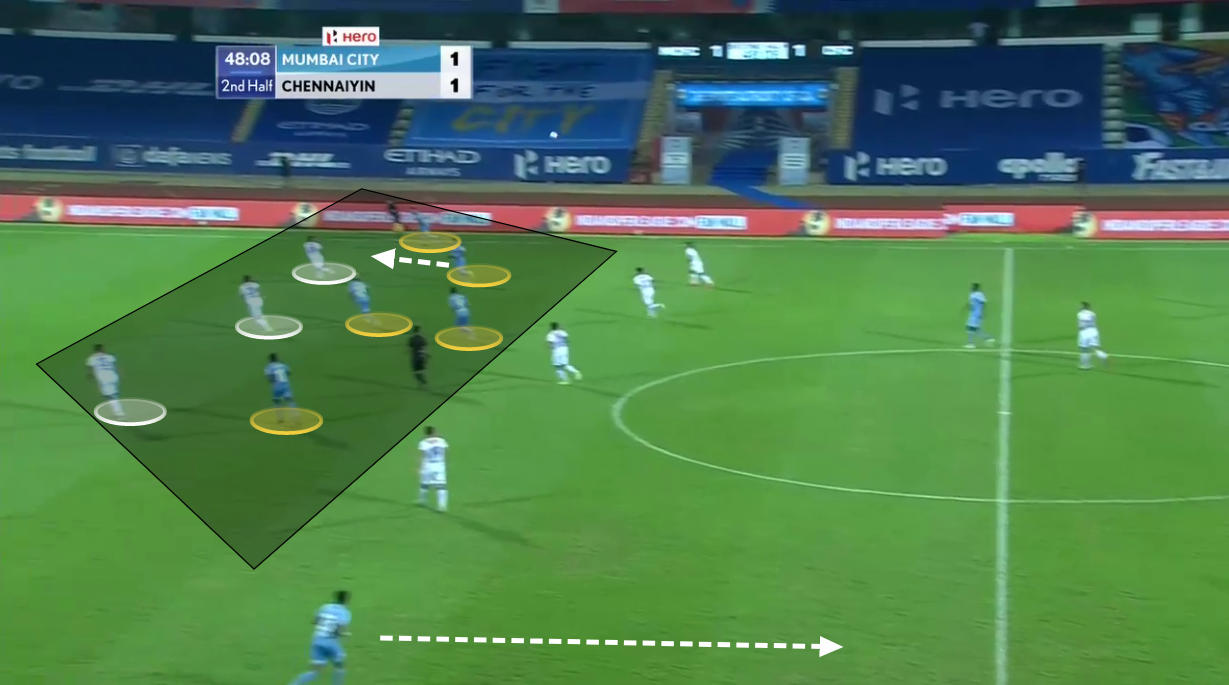 However, Mumbai could not trouble Chennaiyin in these situations either due to enormous work rate and defensive ability of Chennaiyin’s second line of defence or due to Mumbai’s poor passing.

In the image below also you can see Ranawade overlapping and Vignesh Dakshinamurthy looking to drop to shore up the rest defence. 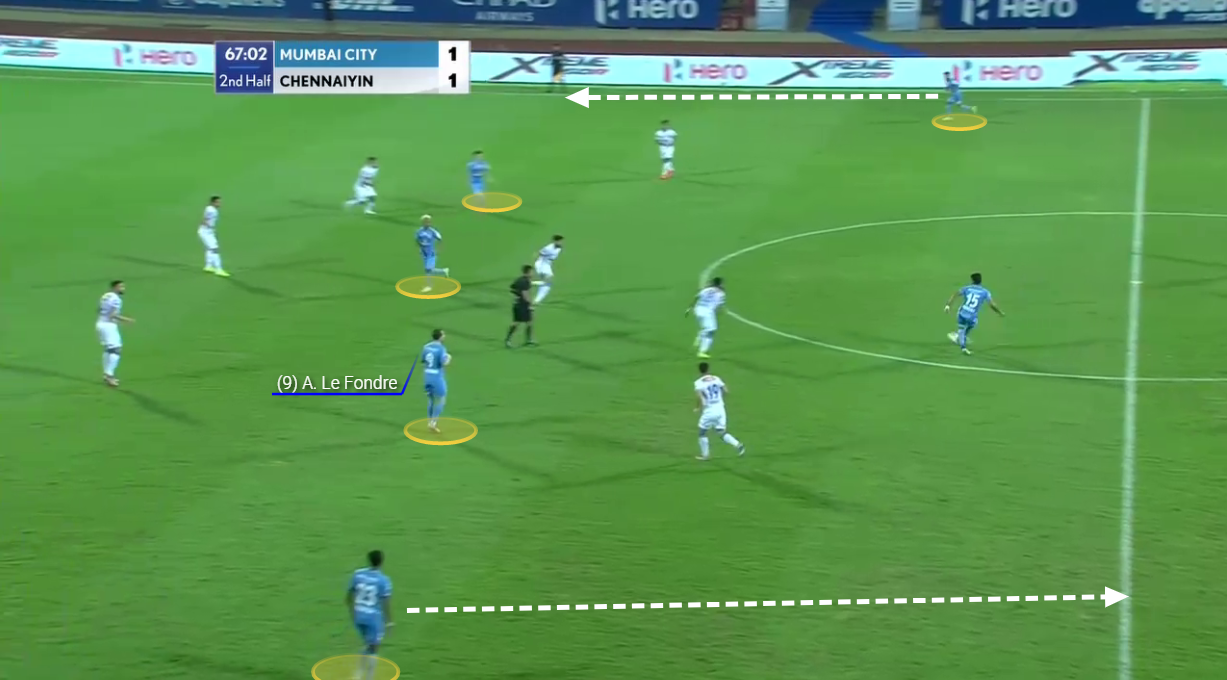 Also, observe the positioning of le Fondre. He is again in between the lines, but now he is in the half space and the left-winger is tasked with maintaining the height. The former Premier League striker would often drift to these positions with one of the wingers rotating with him.

The other way Mumbai tried to exploit Chennaiyin was with counter movements. 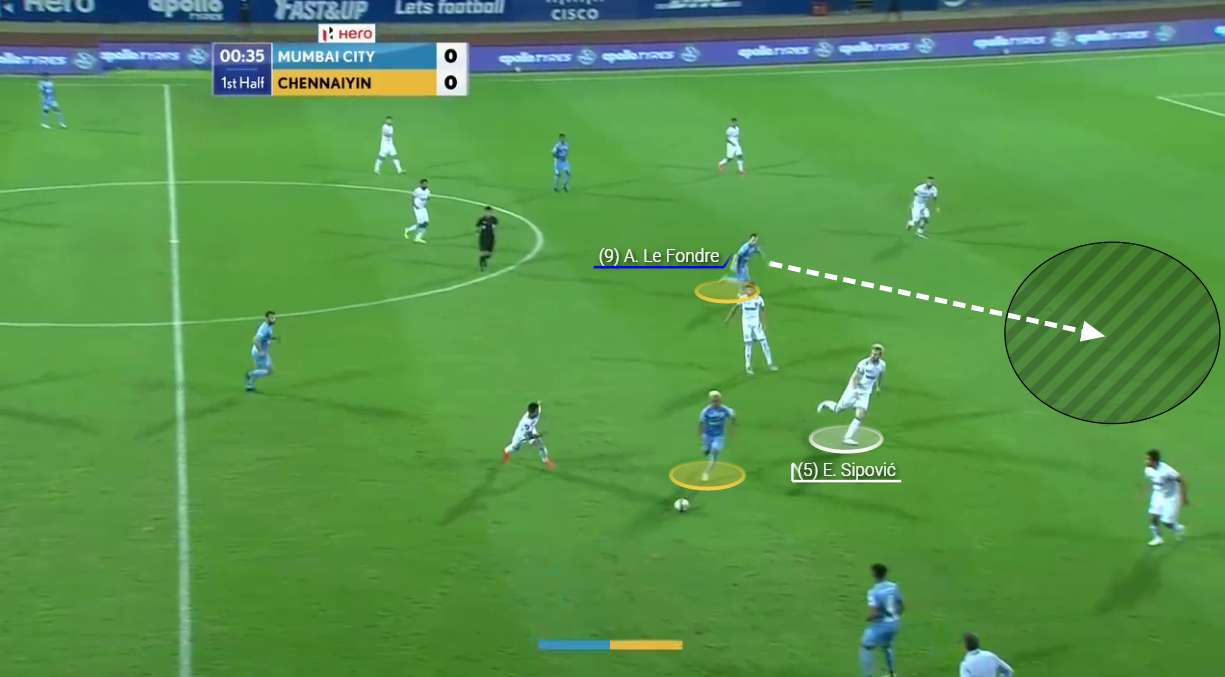 Chennaiyin’s centre-backs, most of the times, would stick to their opposition in their vicinity. Lobera’s men tried to take advantage of this situation. Here, the right-winger, Bipin positioned himself in the half space initially and then dropped deep dragging away Sipović along with him. It opened up space in behind for le Fondre to exploit who was initially in between the lines. However, Mumbai could not exploit Chennaiyin from this instance.

Again, in the image below, you can see a similar pattern. Here, le Fondre drags away Sabiá along with him, which opens up space behind. You can also see Ranawade retreating to a deeper position when the ball was circulated on the left flank. 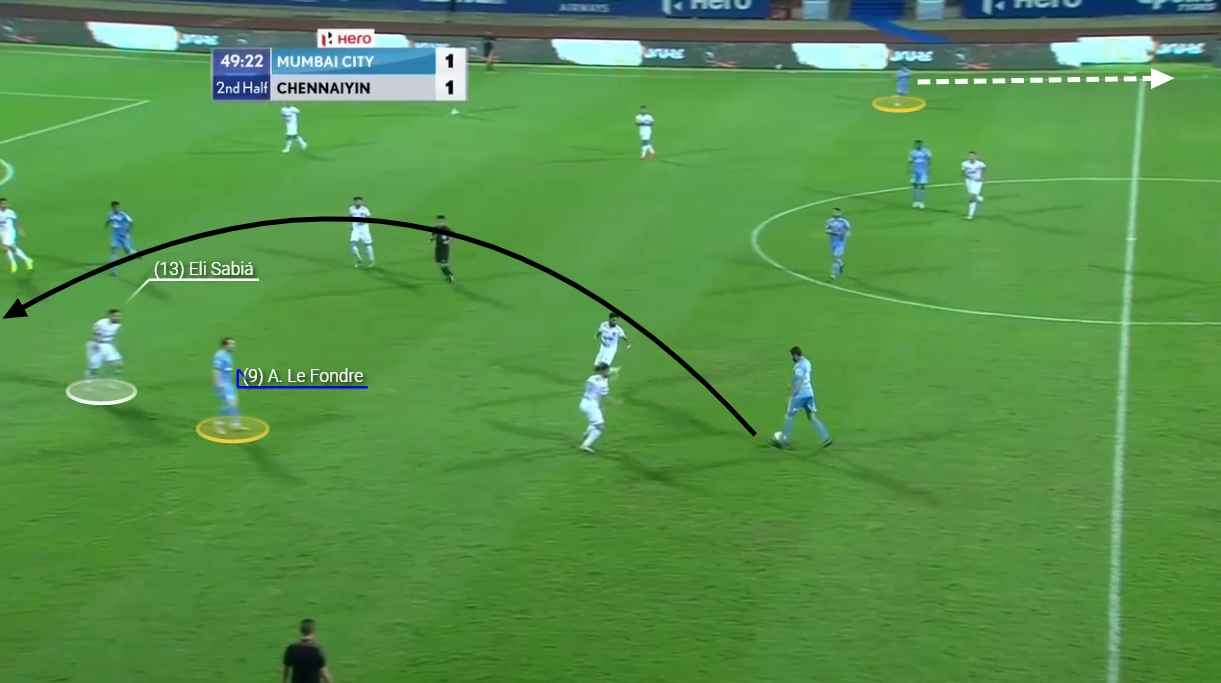 Jahouh passed the ball to the marauding left-back. However, the left-back’s cross let the team down. 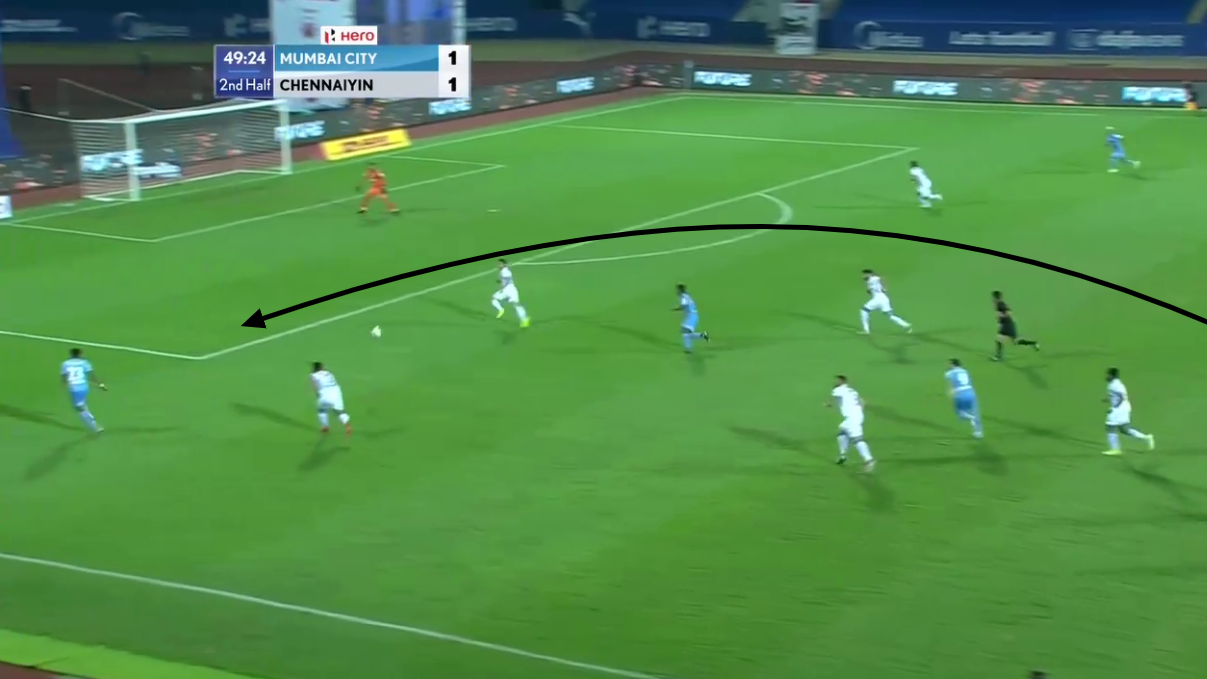 The final result matters, however, Csaba László should be happy with his team’s performance. Chennaiyin have registered the highest xG in this campaign by a team in any fixture. However, Marina Machans have themselves to blame for their loss. Jakub Sylsvestr should have scored more than one goal. His xG reads 2.28 which is the best by any player in a match in this campaign.

Mumbai City could not execute their free-flowing football against Chennaiyin. The Islanders did create some chances from open play, but it was mostly the set-pieces where they hurt Chennaiyin FC the most.