With a lot of games gone in Europe’s top five leagues, it’s a good time to analyse who the best players have been. To analyse which players have exceeded expectations, and which just haven’t been up to their normal standard. This rather unprecedented start to the season has been surrounded with debates about whether more goals are being scored because of absent fans in the stadiums. However, most of the attention has been put on the strikers rather than goalkeepers.

This data analysis will use statistics to identify the best performers in each section of goalkeeping. The data will include goalkeepers within the top five European leagues who have played 10 games or more for the same club throughout the 2020/21 season. The data will be broken down into passing, sweeping, and shot-stopping. We will identify the best in each section and which ones performed the best overall.

Who has been the best at preventing goals?

Shot-stopping data can sometimes be the most misleading. For example, a goalkeeper who faces fewer shots per 90 will have less chance of making an error or conceding. This means that those keepers who face more shots per 90 are more likely to have negative stats. So it’s important to keep this in mind. We can use advanced stats to compare keepers to each other to give us a better view of their individual performance, rather than their team’s.

The first graph looks at how many goals each goalkeeper concedes per 90 minutes and how many they were expected to concede. The xG against metric measures how good the chances that each goalkeeper faced were. 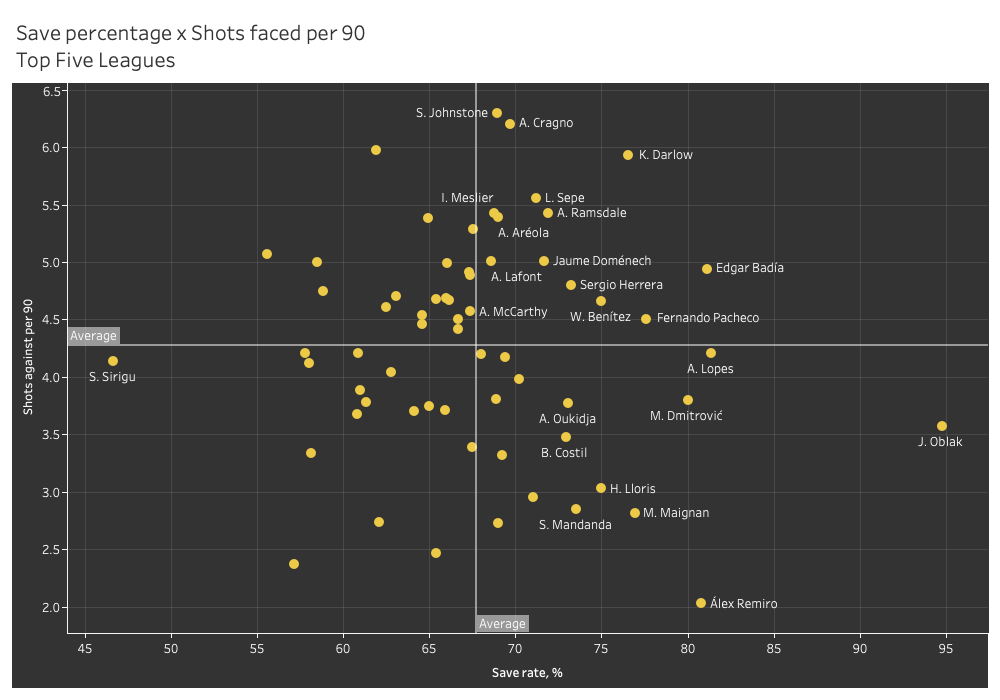 As we can see, there is one standout performer. Atlético Madrid’s Jan Oblak is arguably the best goalkeeper in the world. We say arguably because some believe that he is well protected by his great defence. Nonetheless, the Madrid man boasts a huge save percentage of 94.74%, a truly ridiculous number. Although he has faced a below-average amount of shots per 90, he still faced 3.57 shots per 90.

The players towards the top of the graph have faced the most shots, this means that those in the top right quadrant are the best performers. Édgar Badía has had a surprisingly good start to the season with Elche in La Liga. The Spaniard has faced 4.94 shots per 90, saving 81.13% of them.

Lyon’s Anthony Lopes, who’s a very experienced goalkeeper, has had another great start to the season. He has the second-highest save percentage with 81.36%, having faced just below the average amount of shots with 4.21 per 90. Álex Remiro also has a very high save percentage of 80.77% but faces the least amount of shots with just 2.03 per 90. His Real Sociedad team have only conceded five goals this season.

Karl Darlow, Fernando Pacheco, Mike Maignan, and Marko Dmitrović all have great save percentages with the former two facing many more shots per game. 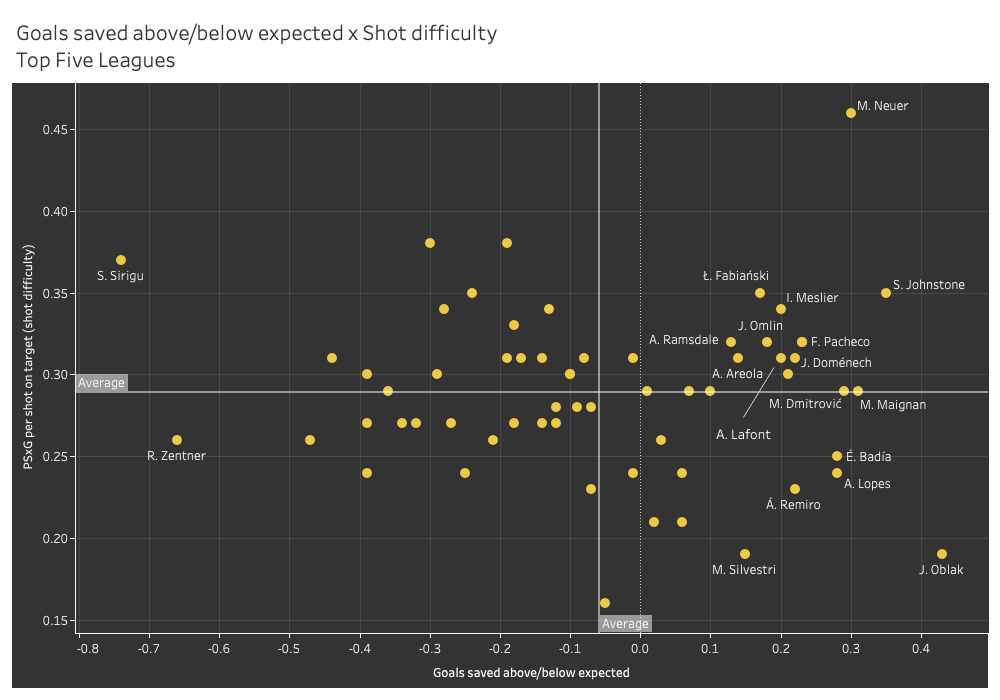 This graph uses more advanced stats than the previous one. It looks at the average difficulty of shots each goalkeeper has faced and how many goals they saved above/below what they were expected to.

Oblak stands out yet again, this time with the highest PS xG +/- per 90 value. He’s saved 0.43 goals per 90. However, once again, he has been aided by his defence. He faced, on average, one of the lowest shot difficulty in this sample (0.19).

At the top of the graph, Manuel Neuer has surprisingly faced the hardest shots this season. He has a PS xG per shot on target value of 0.46. The Bayern Munich captain however, has managed to save a lot more goals than he was expected to. The German has saved 0.3 goals per 90, a great stat considering the difficulty of his shots faced.

Another surprising high performer is West Brom’s Sam Johnstone. The newly-promoted keeper has faced a lot of tough shots, which was expected. However, the Englishman has exceeded expectations by saving 0.35 more goals per 90 than he was expected to.

Which goalkeepers are the best passers?

The modern game has seen the rise of possession-based goalkeepers. The most elite teams in Europe prefer to find shorter, more simple passes rather than a long hopeful pass upfield. Passing has become a very important skill for goalkeepers, with the best sharing their training between shot-stopping and passing. 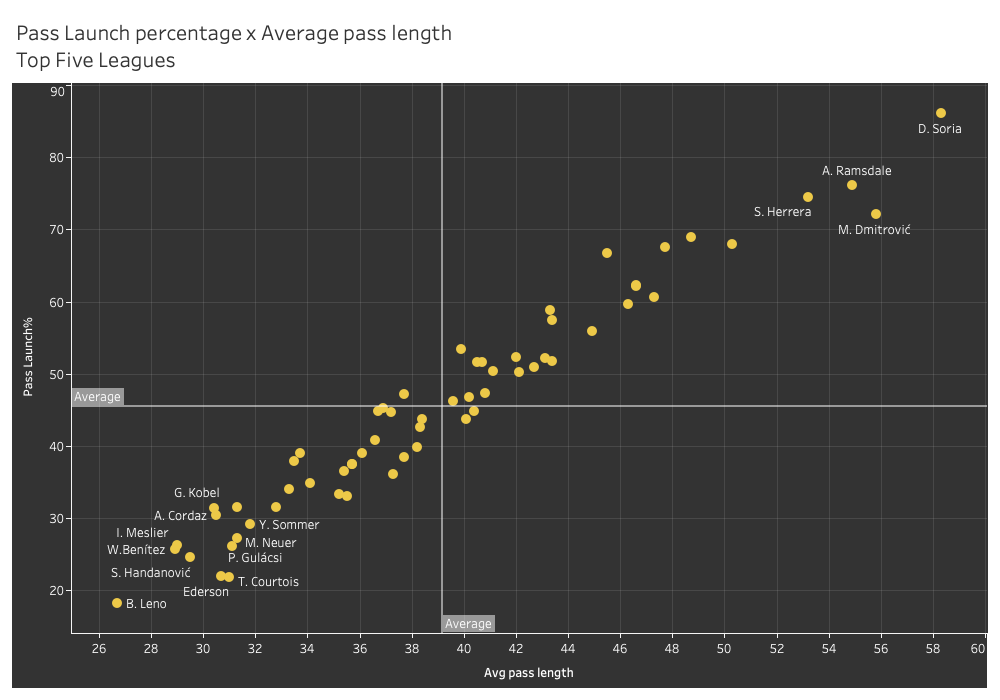 As we can see, the majority of keepers towards the bottom left of the graph play for Europe’s elite. Arsenal’s Bernd Leno is the shortest passer. He has an average pass length of 26.7 metres and the German only launches 18.2% of his passes. As is clear by this example, a goalkeeper’s passing style often matches up with their team’s tactics.

OGC Nice’s Walter Benítez has the next shortest average pass length with 28.9 metres. He also has a very low pass launch percentage of 25.7%. Two of Europe’s most promising goalkeepers, Ederson and Thibaut Courtois also show up very positively. The Manchester City man launches 22% of his passes with an average length of 30.7 metres. While the Real Madrid shot-stopper has an average pass length of 31 metres and launches 21.8% of his passes. 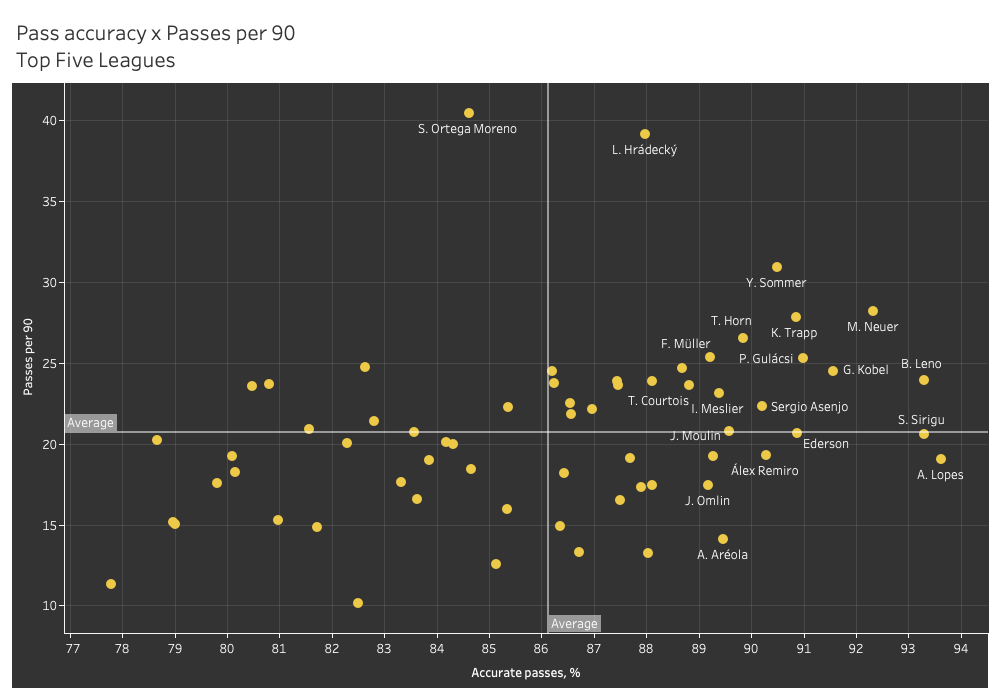 This graph uses simpler metrics. It looks at the number of passes each goalkeeper makes per 90 minutes and how accurate these passes are.

Arminia Bielefeld’s Stefan Ortega Moreno surprisingly has the most passes per 90 with a huge 40.47 joined with a passing accuracy of 84.62%. These are staggering numbers for a goalkeeper of a newly promoted team. Close to him in terms of passes per 90 is Bayer Leverkusen’s Lukáš Hrádecky. He has a slightly better pass accuracy of 87.98% which is fantastic considering the number of passes he makes per 90.

The Bundesliga pass masters are Neuer and Mönchengladbach’s Yann Sommer. Sommer makes the third-most passes in the sample with 30.92 with an accuracy of 90.49. The Bayern Munich man makes 28.21 passes per 90 and completes 92.33% of them.

Protecting the space between their box and defence 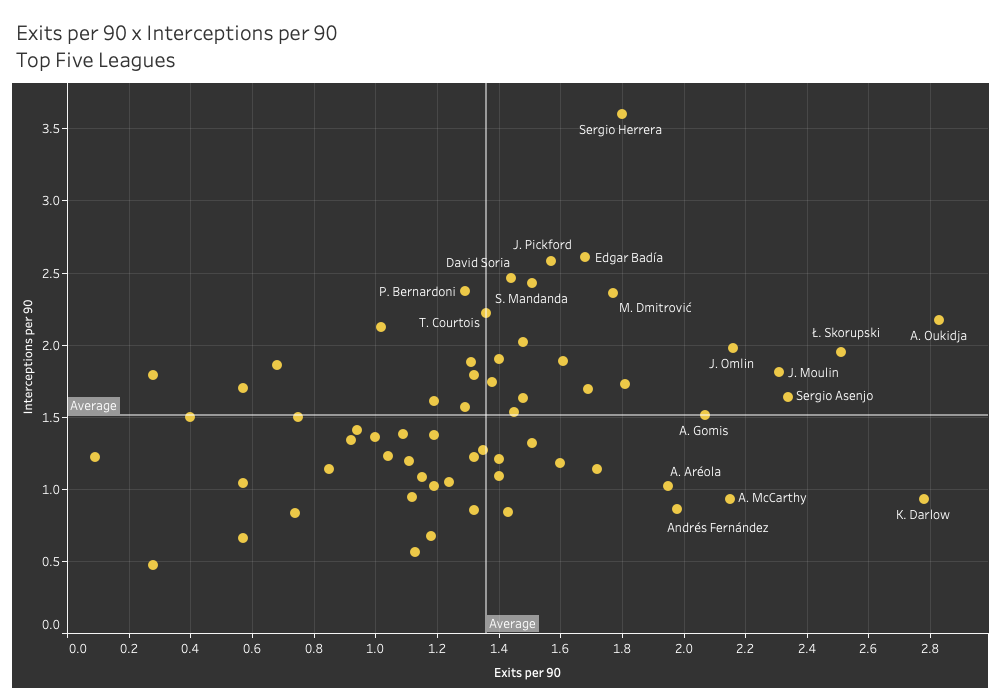 Depending on the team’s needs, sweeping up in the space between a goalkeeper’s box and defence can be crucial to their solidity. The above graph looks at exits that each keeper makes per 90 and the number of interceptions made per 90. Sweeping is an important part of this analysis.

Osasuna’s Sergio Herrera makes the most interceptions per 90 with 3.6. This shows that he’s very good at reading the game and deciding when he can beat his opponent to the ball. Herrera also makes an above-average amount of exits per 90 with 1.8.

Alexandre Oukidja makes the most exits per 90 with 2.83. The Metz man has a good amount of interceptions too with 2.17 per 90. Newcastle’s Karl Darlow has been in the starting line-up this season and he has certainly taken advantage of it. The Englishman is a very good sweeper-keeper. He makes 0.93 interceptions and 2.78 exits per 90.

Jan Oblak – No surprise here. However, of the best goalkeepers in the world, along with Neuer, Oblak was the only consistent performer. Although his strong defence aids his stats, the 27-year-old is proving to be one of the most reliable goalkeepers in world football. His team’s tactics mean that he doesn’t often make short passes and therefore doesn’t show up well in the passing section. Atlético Marid look unstoppable this season, and Oblak is a big part of this.

Édgar Badía – The Elche shot-stopper has been one of the most surprising performers this season so far. He has only conceded 10 goals in 10 games this season which is very good for a team predicted to be fighting relegation. The Catalonian also shows up well in the sweeping department. He uses his skills to ease pressure on his defence, dealing with balls in behind. It will be interesting to see whether Badía can continue his form throughout the season.

Illan Meslier – The youngest player on this shortlist, and one of the youngest in the whole sample is new Leeds keeper Meslier. The 20-year-old is already having much-deserved plaudits for his excellent start to the season. Although Leeds haven’t had the best start defensively to the season, Meslier has been a consistent performer for the newly promoted team. The Frenchman is also a very good passer, fitting well into his team’s tactics. He’s proven himself as one of the best young goalkeepers in the world.