Goalkeepers are becoming more and more important to teams around the world. Not only are they paramount in stopping goals, but also in beginning attacks. Some teams have struggled in recent years to find the right acquisition, a goalkeeper that is good enough and that can slide into the team’s playing style. The most prominent example is Chelsea with Kepa. Although he fits into their playstyle, he has not been good enough at preventing goals. Many teams keep their goalkeeper scouting within the top five leagues, not realising the potential that can be found outside.

Our previous data analysis looked at the stronger leagues outside of the top five, but this analysis will focus on the leagues outside the top five. We will look at the top divisions from Austria, Switzerland, Scotland, Denmark, Ukraine, and Greece. We will consider their passing, sweeping, and shot-stopping abilities. And only consider players who have played over 1,500 minutes this season and have played in one of these leagues recently. For example, Kamil Grabara, on loan from Liverpool, was recalled after only a few games, so players like this won’t be included.

Historically, the only job for a goalkeeper was to prevent goals. However, their role within a team’s style has changed significantly over the years. But in this first section, we will focus on what should be a goalie’s top priority, stopping shots. We will use statistics to compare how they perform in relation to their team’s defensive solidity, and how often they stop shots. 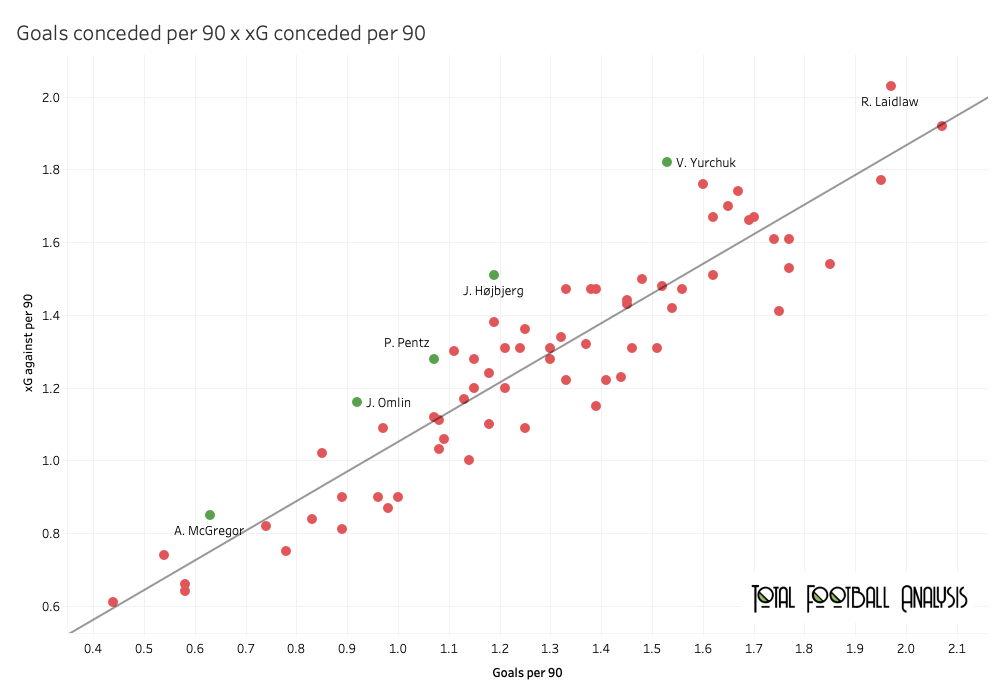 The above graph compares each goalkeeper’s expected goals conceded against their actual goals conceded. The players above the trend line have conceded fewer goals than they were expected. We have highlighted the top performers.

Allan McGregor of Rangers has conceded the fewest goals and was also expected to concede the least. However, he is still conceding less expected. His xG per 90 is 0.85, but he only conceded 0.63. The Scot is 38-years-old now, but he is showing no signs of slowing down.

After McGregor, Jonas Omlin has conceded the fewest goals. The Swiss goalkeeper plays for one of the top teams in Switzerland, Basel. Because of this, he would be playing behind a very strong defence. The 26-year-old has 1.16 xG per 90, but only concedes 0.92 goals per 90. Similar to Omlin is Austria Wien’s, Patrick Pentz. The 23-year-old has an xG per 90 value of 1.3, but only conceded 1.11.

Jeppe Højbjerg had a very impressive season with Esbjerg last season. The 25-year-old Dane was expected to concede a huge 1.51 goals per 90. But with his outstanding performances, he only conceded 1.19 goals per 90. Højbjerg is the most impressive on this graph. But another player to note is Dnipro’s Valeriy Yurchuk. The 30-year-old was expected to concede 1.82 goals per 90 but only conceded 1.53 behind a fairly weak defence.

The next graph will use each goalkeeper’s save percentage against their defence’s strength data (how many shots they concede per 90). 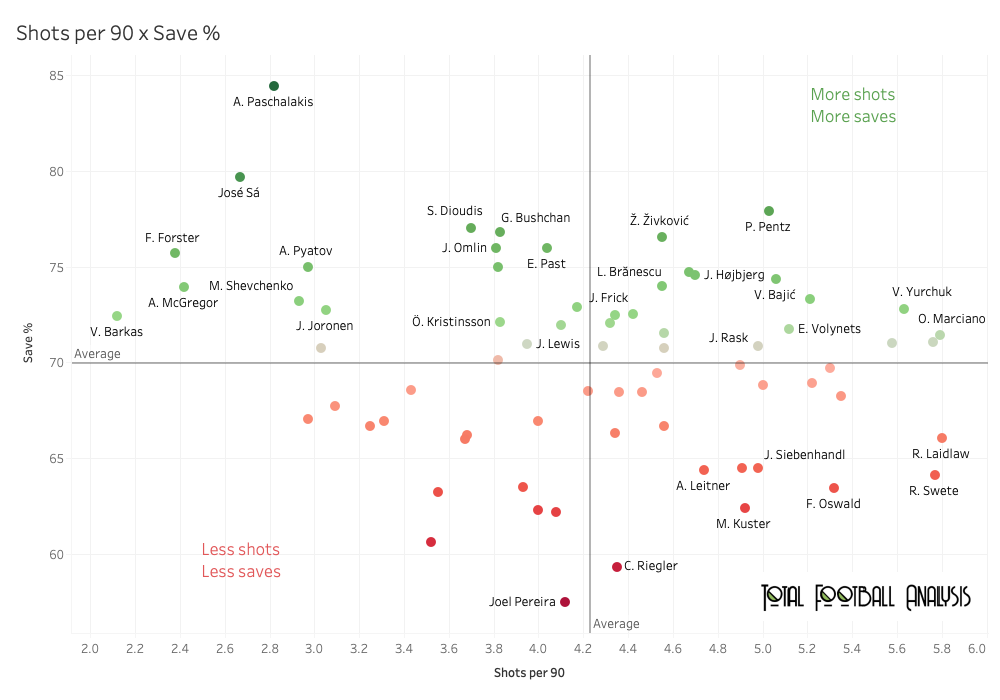 Those in the top right quadrant impress the most. They face a high number of shots, and often save them, all averaging above 69.98% save percentage. Goalies in the top left quadrant also have a high save percentage but also play behind a better defence, meaning they face fewer shots.

Although he faces a below-average amount of shots per 90 (2.82), Alexandros Paschalakis of PAOK has the highest save percentage with 84.44%. PAOK have alternated between Paschalakis and Zivko Zivković between the sticks this season, but the former has certainly impressed more. He’s played in Champions League and Europa League qualifiers this season, so he’s come up against some tough opposition.

27-year-old José Sá has only conceded nine goals in 26 games this season, proving he’s one of the better goalkeepers in these leagues. The Olympiacos shot-stopper doesn’t face many shots per 90, because Olympiacos are one of the best defensive teams in the Greek league. He only faces 2.67 shots per 90 but has a great save percentage of 79.66%.

Vladimir Bajic of AE Larisa in Greece has had a great season. The 32-year-old has faced a higher than average amount of shots per 90 this season with 5.06, and he has a save percentage of 74.34%. The Serbian is just passed his peak but is still performing really well in the Greek league.

Pentz also shows up well here. He impressed in the previous aspect and continues here. He faces 5.03 shots per 90, which is above-average, and he saves 77.91% of shots he faces. Showing his consistency.

The next section will analyse each keepers ‘sweeper-keeper’ tendencies.

The below graph compares each goalkeeper’s exits per 90 and possession adjusted interceptions per 90. This will give us a good sense of which goalkeepers prefer to leave their goal line. 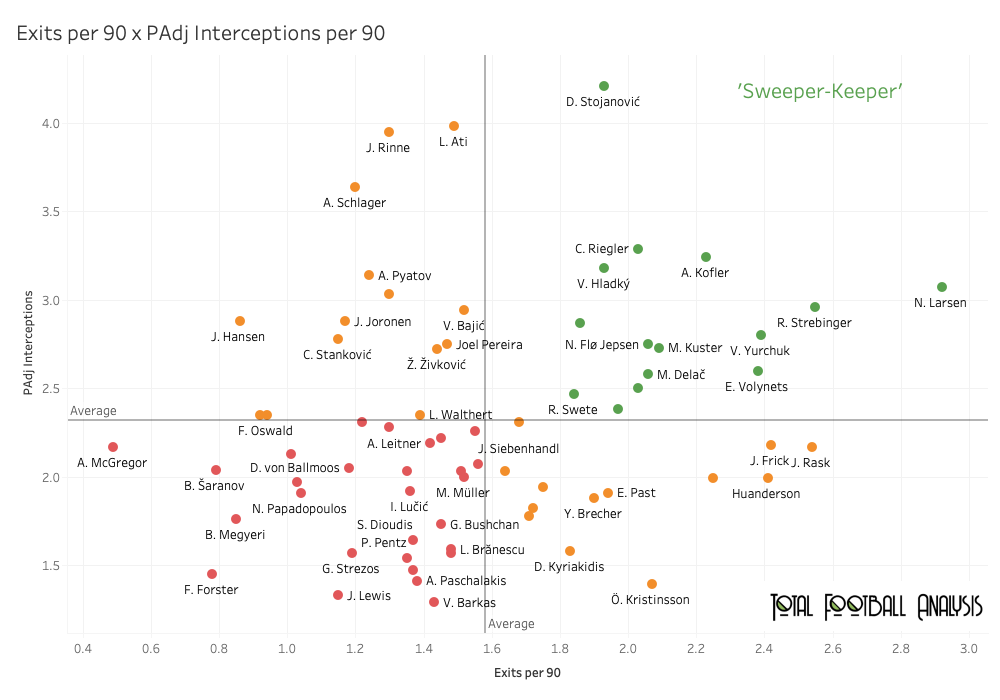 In the above graph, the goalies in the top right quadrant could be considered a ‘sweeper-keeper’. They have above-average exits per 90 and interceptions per 90.

Although he has recently transferred to Guingamp in Ligue 1, Nicolai Larsen showed these tendencies whilst at Nordsjælland. The 29-year-old Dane has the most exits per 90 with 2.92 and has above-average interceptions per 90 with 3.07. His impressive performances have earned him a good move to a team within the top five leagues – showing the importance of scouting outside these leagues.

Another player that has recently moved teams in Dejan Stojanovic. The former St. Gallen shot-stopper enjoyed leaving his line to help his defenders. He has had mixed performances since joining Middlesbrough, however. The Austrian has the most interceptions per 90 with 4.21 and has a higher than average exits value of 1.93.

Christoph Riegler of St. Pölten prefers to leave his line to help his defence too. The Austrian, captain of his side has balanced stats when it comes to these two categories. He has 2.03 exits and 3.29 interceptions per 90. Alexander Kofler has similar stats too. The 33-year-old plays in the same league, but for Wolfsberger. He has 2.23 exits and 3.24 interceptions per 90.

Rapid Vienna’s Richard Strebinger has the second most exits per 90 (2.55), meaning he likes to leave his line to claim crosses and minimize the work his defenders have. As a defender, this can take so much pressure off the backline. He also makes 2.96 interceptions per 90.

Apart from helping out their defence, a modern goalkeeper is integral to their team’s play style. And with more and more teams adopting a more patient build-up approach, we’ll highlight the best passers in the below section.

Which keepers are the best passers?

The below graph will compare each goalkeeper’s short/medium pass tendency and lateral pass tendency. These two statistics give us a good idea of which goalkeepers prefer to pass the ball short. The colour of the marks indicates their average pass length – the darker the mark, the shorter the average pass. 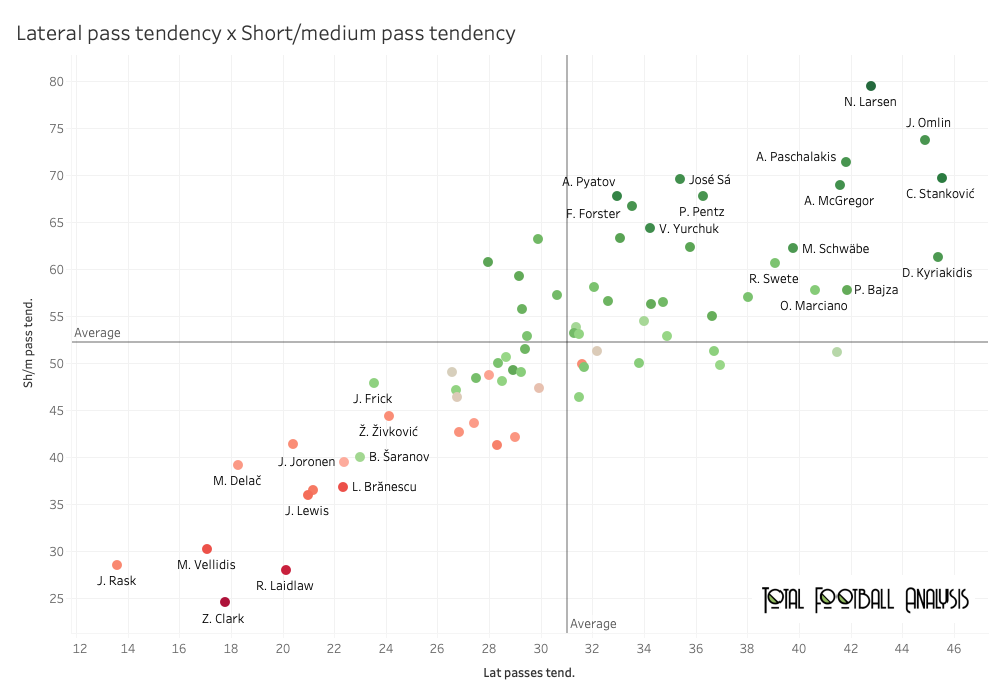 Most goalkeepers we highlight in this section have been mentioned before, showing how good they are across different aspects of goalkeeping. Larsen has the highest short/medium pass tendency with 79.54%. This means he’s very reluctant to go long. Larsen has an 89.44% pass accuracy and makes 22.92 passes per 90.

Cican Stanković has the highest lateral pass tendency with 45.53%, meaning his team play a very conservative style. He also has a short/medium pass tendency of 69.70%. The Austrian plays in his home country for RB Salzburg. He’s conceded 28 goals in 27 games in the league this season, keeping 10 clean sheets.

Previously mentioned José Sá also had great passing stats. The 27-year-old makes 15.45 passes per 90 and completes 88.30% of them. He prefers to play simpler passes so his team can retain possession. He has a lateral pass tendency of 35.40% and a short/medium pass tendency of 69.58%.

The above graph shows three players that we believe are worth analysing further. Omlin and Stanković are nearing their peak, whilst Pentz is a good young prospect. We believe that these keepers, with a bit of experience within the top five leagues, would be a great option for some teams.

Manchester City found Ederson in Portugal, this type of acquisition shows the importance of scouting outside the top leagues for goalkeepers. Whilst it may take a little time to settle in, they will begin to perform excellently, as we’ve seen with Ederson. Although some goalkeepers like to return for their home countries to see out their careers, evident in the number of older goalkeepers in this sample, there is certainly a big scope to find hot young prospects for the future.