Carles Cuadrat is leading Bengaluru FC for the third year running, a feat not accomplished by many in India. The Barcelona academy graduate has maintained high standards throughout his tenure and made Bengaluru one of the most impermeable teams in the Indian Super League.

They faced two-time league winner Chennayin FC, who are led by the Hungarian Csaba László. While the tactical aspects of the match are explored, it will be too soon to judge a team even though they were the finalists of last year.

In this tactical analysis, we will examine the tactics of both Bengaluru and Chennaiyin. The following analysis will dissect match events and correlate them with the final result. 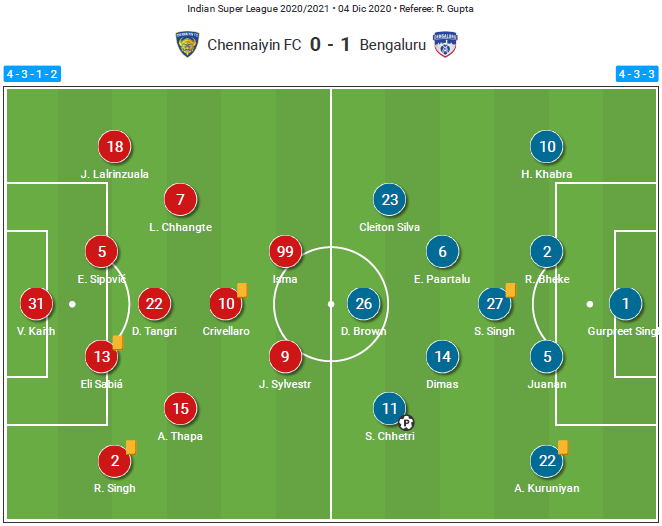 Chennaiyin started in a 4-3-1-2 formation with Vishal Kaith playing between the sticks. The back four comprised of Reagan Singh, Eli Sabiá, Enes Sipović and Jerry Lalrinzuala. The midfield three had Deepak Tangri, Anirudh Thapa and Lallianzuala Chhangte. Esmaël Gonçalves (Isma) and Jakub Sylvestr led the line with Rafael Crivellaro playing behind them as the attacking midfielder. 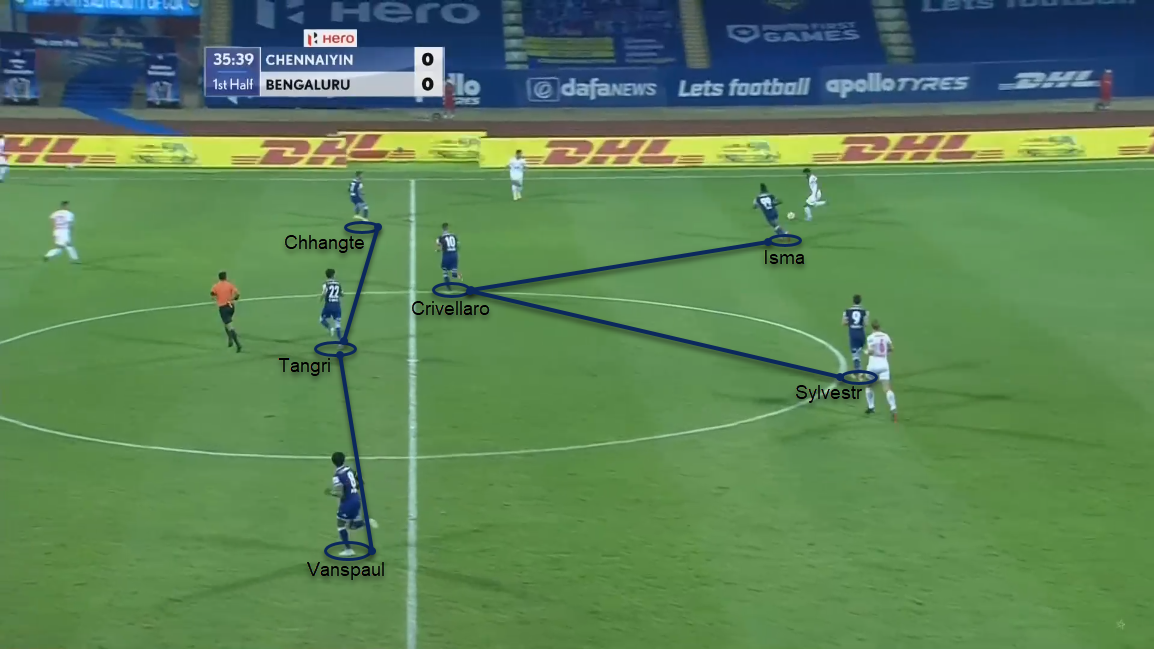 The Blues are a team who are used to playing with less possession, going long from the back and having a direct tactical plan under Cuadrat. But it wasn’t the same against Chennaiyin due to their structure and pressing style. In Marina Machan’s 4-3-1-2 formation, Isma and Sylvestr endeavoured to press Bengaluru’s centre-back, while Crivellaro would be ideally tasked to mark the pivot. In such a system, the first line of the press is tasked upon to redirect the play with pressure (setting traps), cut the passing angles and cover shadow/mark the pivot. However, the first line barely managed to execute any of those tasks successfully. 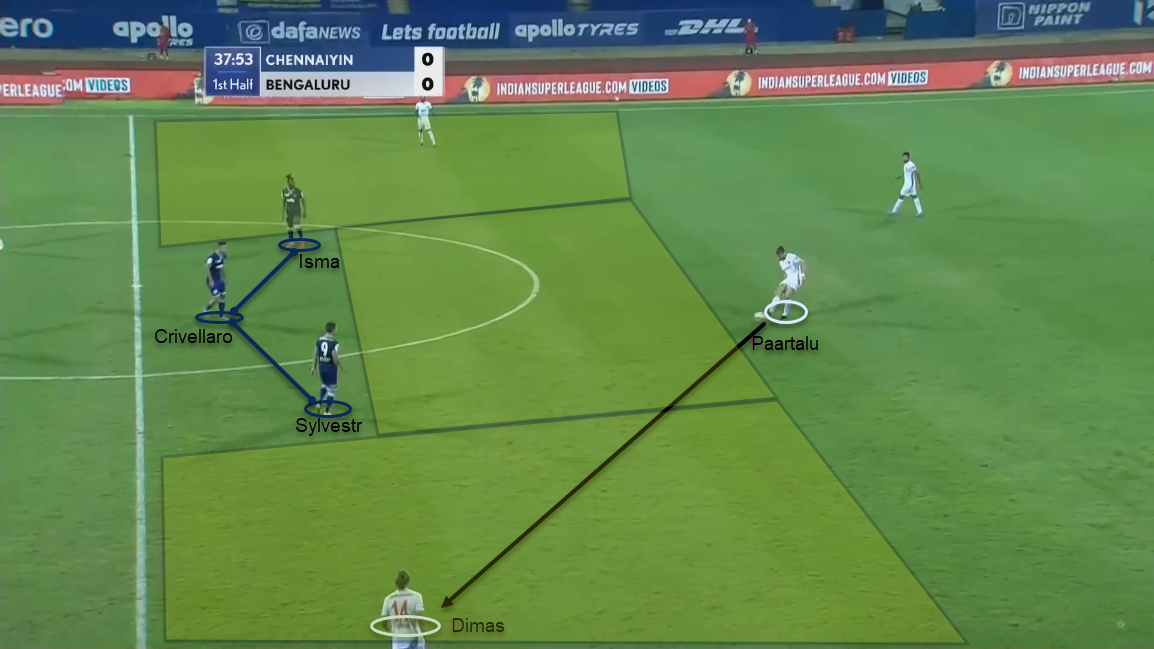 When the front three stayed compact, Dimas settled between the centre-back and the full-back to make the pitch bigger for Bengaluru. Paartalu could easily play a pass to him as he had abundant space around him and Sylvestr didn’t bother to cut the lane. Chennaiyin’s front three only cared to protect the space in the centre without applying any pressure or providing any hurdles into Bengaluru’s build-up. The overlong space in the wide areas didn’t encourage the forwards to track the pass and press Dimas. Which meant that the responsibility to deal with this would lie on the second line of defence.

This system of pressing requires high work-rate from the midfield three as they need to stay compact, shift across with the ball and press on the exteriors as a group. Thapa playing as a right centre-midfielder had the endurance to press the opposition full-back and recover back to his central possession when he lost access to the press. Which is also why it makes one wonder, that this system was tailored as per the individual’s capacity and was not a philosophical set-up. 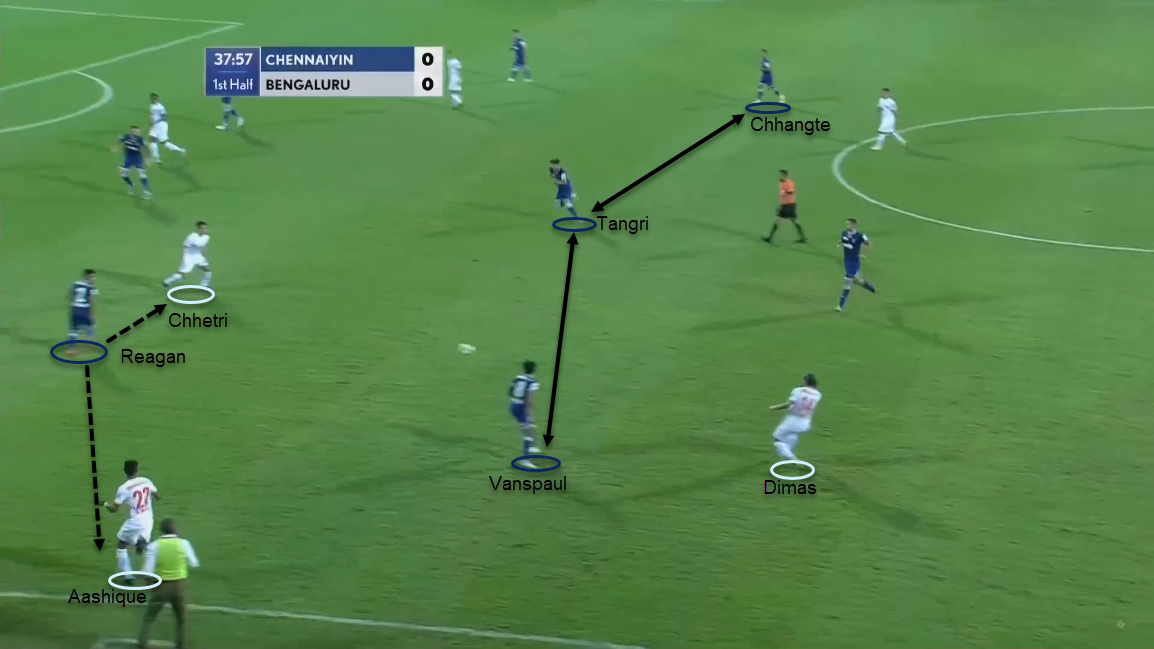 As Thapa got injured in the 15th minute of the game, Vanspaul replaced him as the right centre-midfielder. He was asked to overwork at times since the first-line didn’t cover the wide areas efficiently. Chhangte who is a left-winger was a make-shift centre-midfielder along with Tangri as the defensive midfielder. As a result, he was used to staying wide rather than tucking in close as a midfielder. Dimas’s position allowed Aashique to push higher and Khabra too moved up on the opposite side. Due to which Chennaiyin’s midfield struggled to close the gaps and were easily exposed in the centre.

Bengaluru players rotated on the flank using the left-back, left-winger and the left centre-midfielder and a similar pattern on the opposite side. This would outnumber the Chennaiyin players in the wide areas, creating a 3v2 with the full-back having to deal with two players. 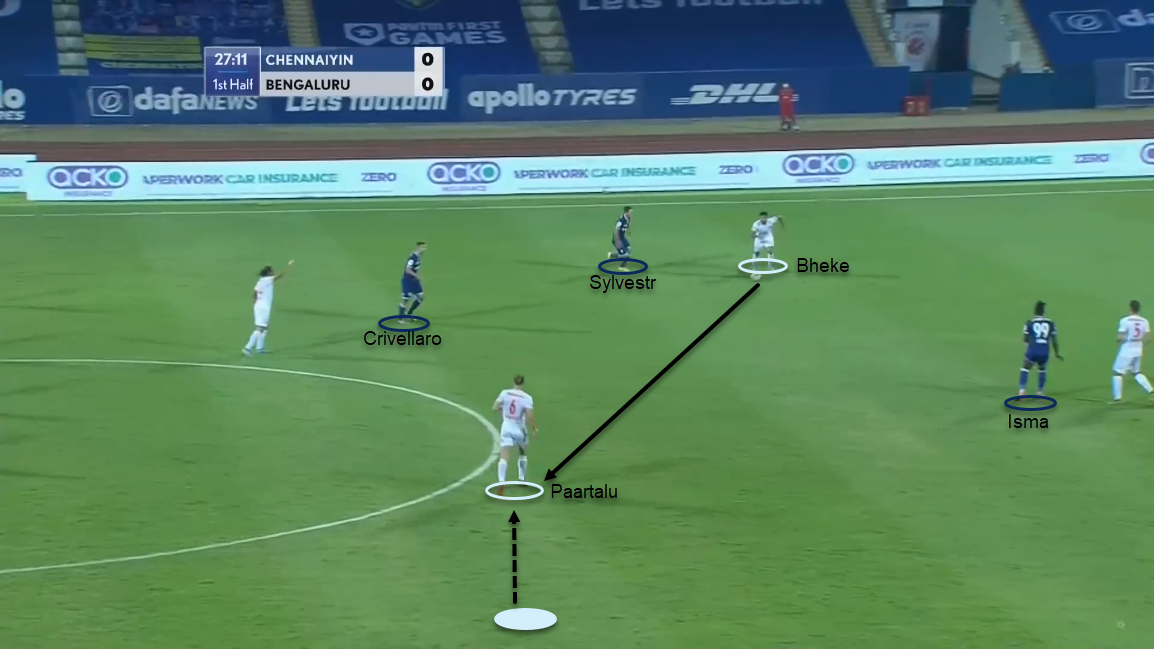 Incase of Chennaiyin’s first line of defence stretching wide to cover area and minimise pressing distance, Bengaluru centre-midfielders would come infield to receive the pass behind the first line of pressure. Chennaiyin’s second line of defence still failed to close the gaps and was vulnerable to packing passes. Bengaluru bypassed the two defensive lines with ease and had uncomplicated access to the creative phase. 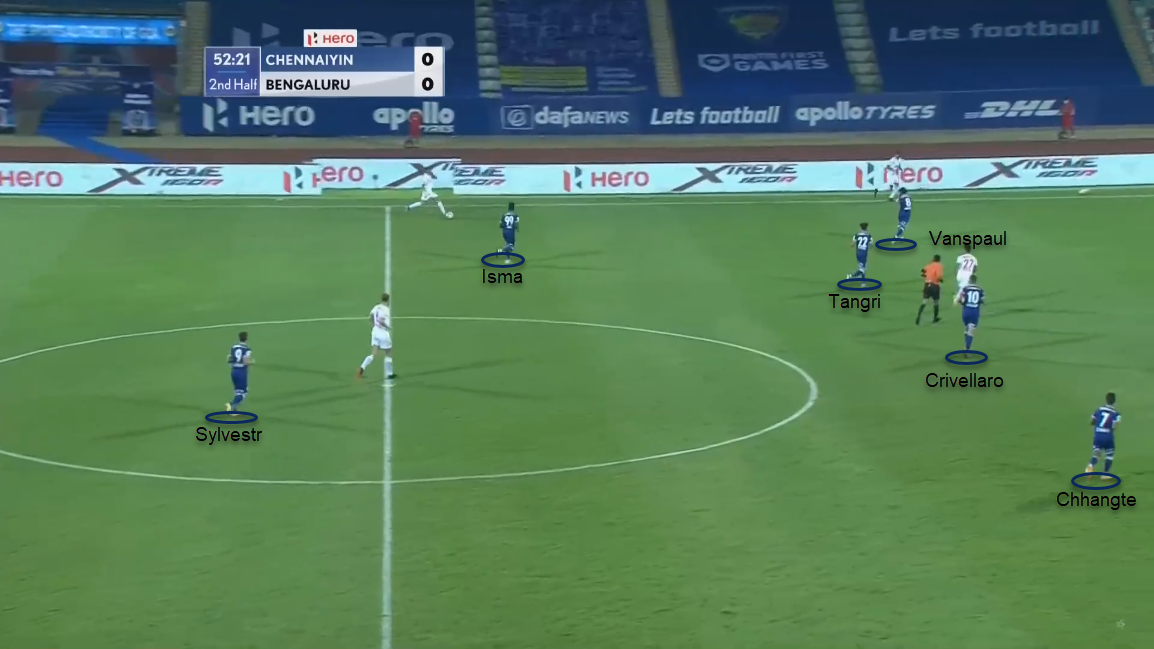 Realising the immense threat faced due to the inoperative pressing system, László switched to a 4-4-2 mid-block in the second half. The system was still imperfect as it saw the attacking midfielder Crivellaro drop to be the second pivot while Vanspaul was shifted as a right-midfielder. It did present the structural solidity but took away the menacing transition shape in which Crivellaro had a huge impact.

Chennaiyin’s game-plan and change of tactics

It is a set pattern where Chennaiyin has not registered more than 39% possession in the first half of all the three games played so far. They try to hold off the opposition and seek their chances on counter and fast attacks. As they had two strikers up front and Crivellaro sitting behind them, they had multiple options to release their players quickly after winning the possession. 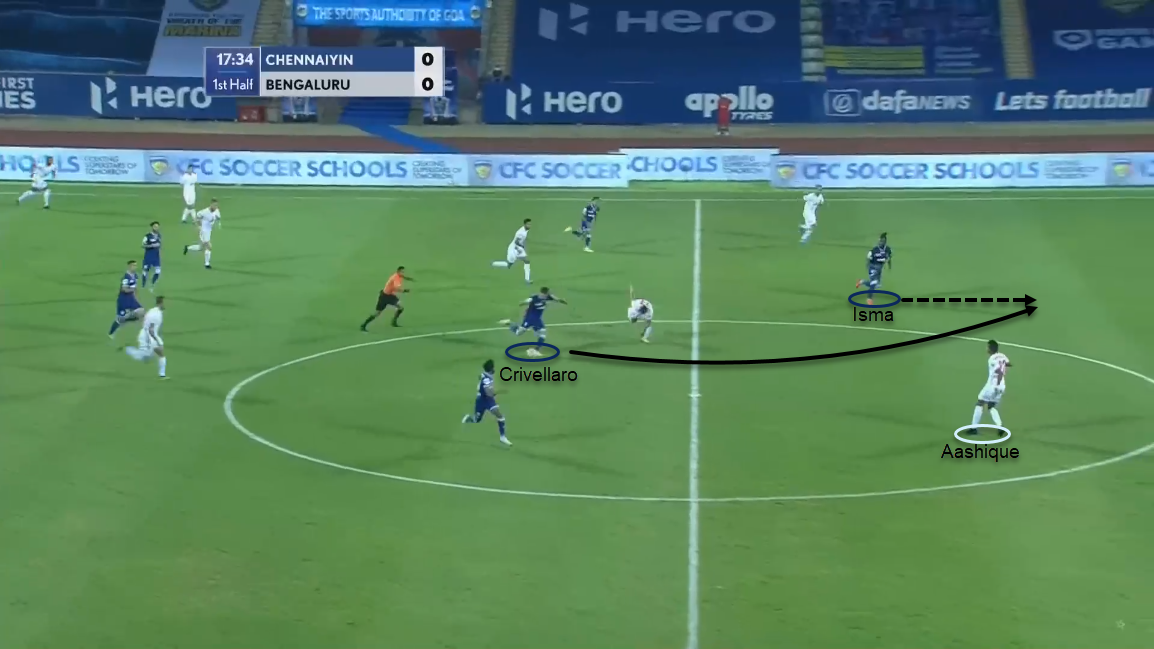 Crivellaro pressed aggressively when a back pass was played to Suresh and was able to dispossess him. He released Isma with a through ball played with his weaker foot. The pass was perfect as the ball trajectory was away from the defender but at the same time, it was also falling onto Isma’s left-foot and moving outfield. Aashique who was quicker than Isma, sprinted back to cover the angle.

Isma preferred to have the ball on his right rather than hitting it the first time with his left. But Aasihque had covered the angle to block the shot and hence the chance went begging. Chennaiyin had more chances to counter but were either too slow for making an impact or were subject to tactical fouls. Their build-up was positive against Bengaluru’s aggressive 4-2-3-1 press where Dimas took the attacking midfielder role to press. However, those changes were limited and had no final output. Kaith preferred to go long in the first half mostly directed towards Isma but Bengaluru had aerial supremacy to win those duels and gain possession. With a total of four shots attempted, of which just one was on target in the first half, Chennaiyin sought to change things in the second half. 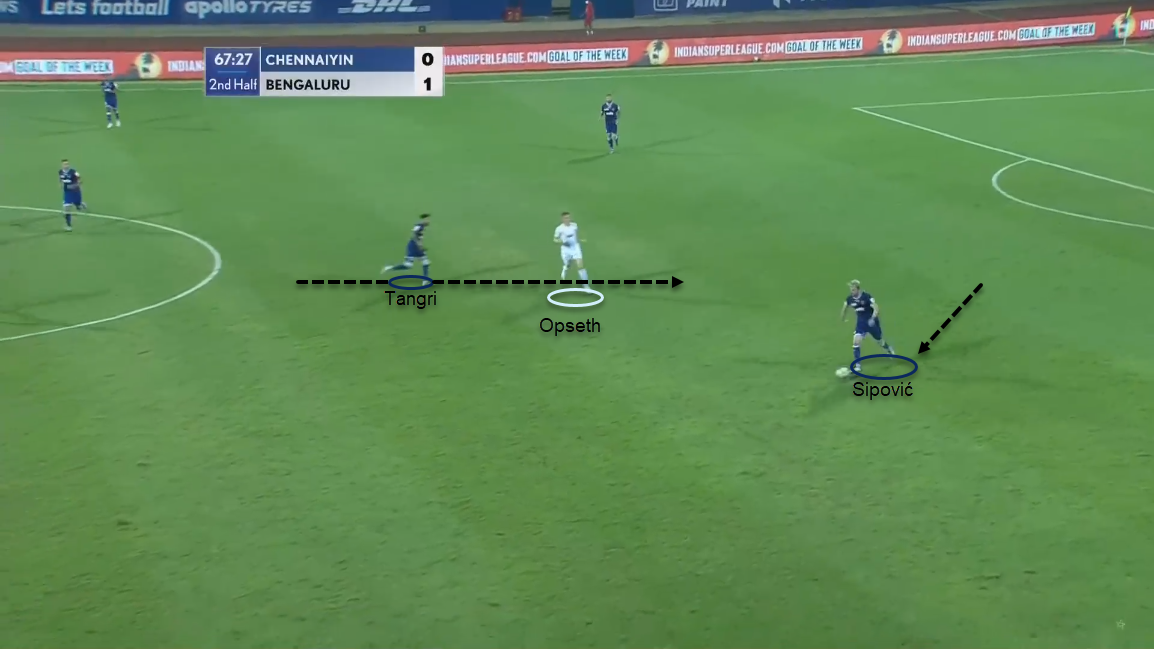 Marina Machans had the agenda to try and keep the ball to have more control over the game especially after conceding a penalty in the early minutes of the second half. Both Reagan and Jerry ventured forward to help the team in offence. This was unrestricted as Bengaluru had shifted to a 4-5-1/4-1-4-1 after taking the lead. With just Opseth pressing the first line of attack, Chennaiyin used it’s centre-backs to run with the ball for progression while making sure Tangri covered the carrier effectively. The centre-backs would then try to play a direct pass to either the inverted wingers or the forwards (full-backs provided the width). 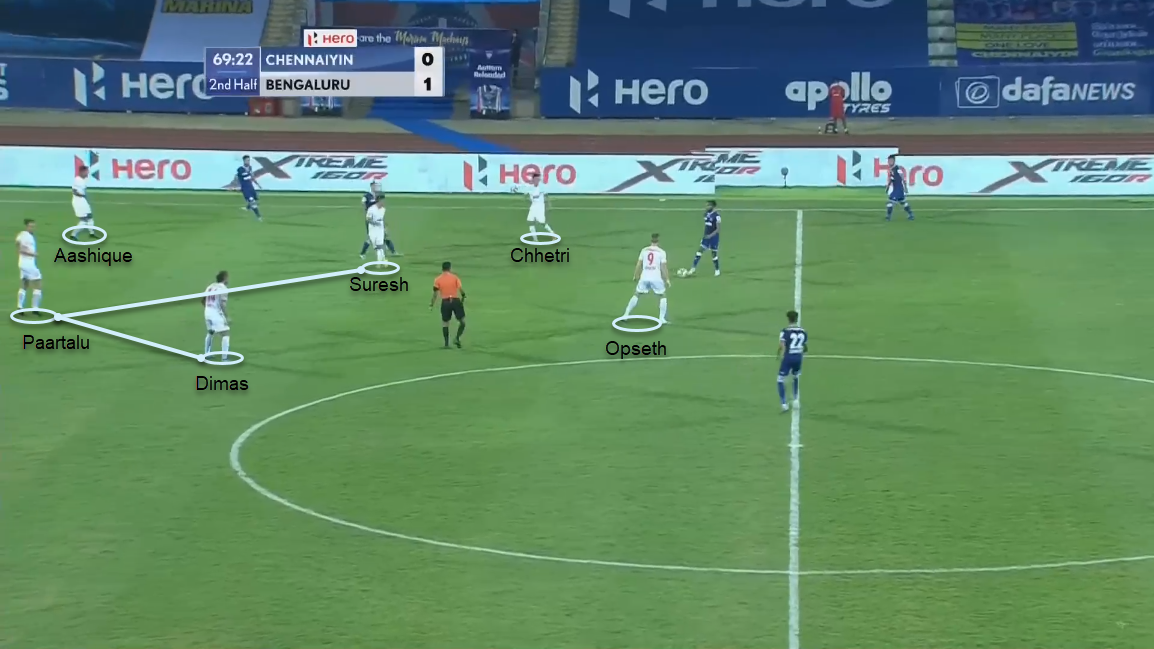 Bengaluru’s defensive structure in the second half was reminiscent to that of the last year. They shifted numbers in the vertical half in which Chennaiyin had the ball. The ball near winger was supported by all the three centre-midfielders to compress the space and outnumber the options in the area. Opseth covered the horizontal lane to sabotage the midfield interplay. Chennaiyin were left with two options, either to play it back and start again or to switch the play with aerial balls. The farside winger for Bengaluru would therefore not come too close with the group but stay relatively wide as to deal with the switch. It did leave a part of central space and halfspace of the other vertical half exposed but it was difficult to access. 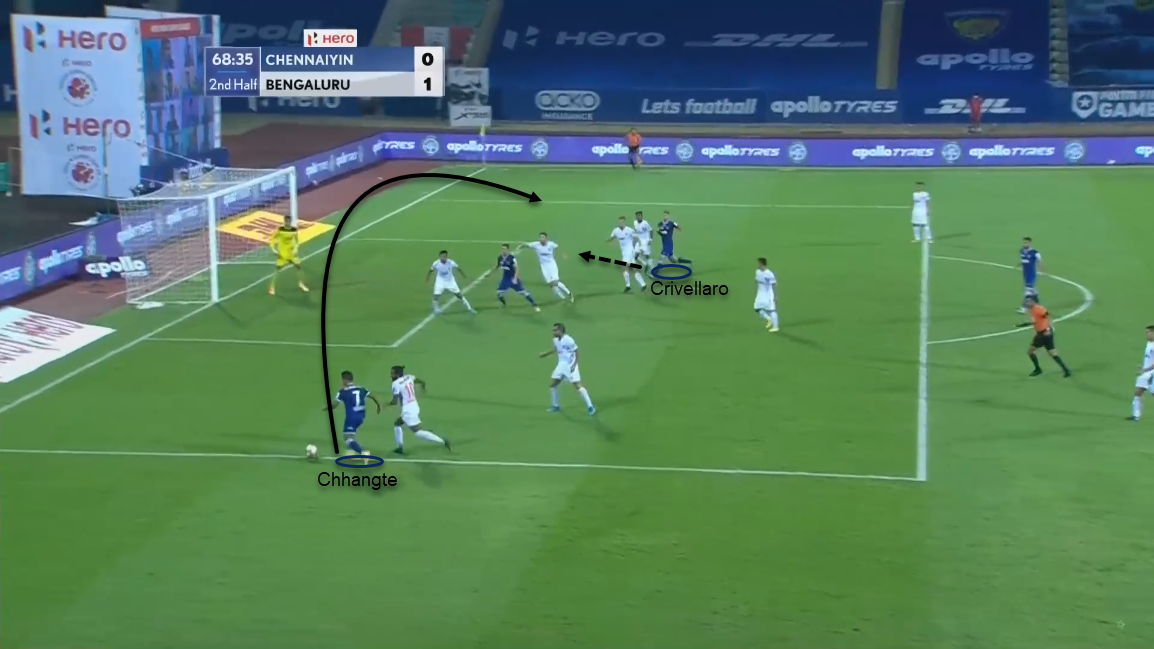 The build-up from the right would lead to a diagonal switch to Chhangte. He then attacked the opposition full-back with speed and precision not to get into the box but to just create a crossing angle. His crosses were aimed specifically at far-post for Crivellaro, who tried to get with his late runs or for Fatkhullo Fatkhuloev who drifted inside from the blindside. The three crosses from the left ended in two shots (one on target) and a penalty claim due to Aashique’s handball which was wrongfully denied. Chennaiyin came very close to an equaliser from those crosses but it just wasn’t their day. 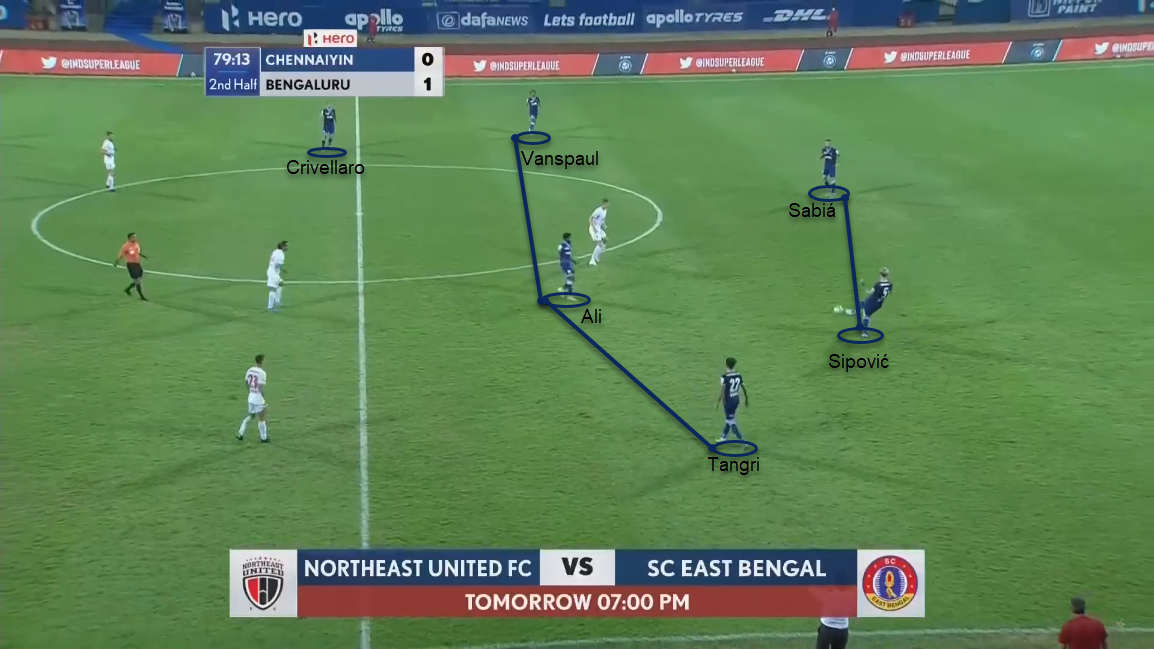 László took out both the full-backs and introduced midfielder Germanoreet Singh along with the forward Rahim Ali. The new shape was strange yet notable as they played without any full-backs. Chennaiyin went to 2-3-1-4 formation when they had the ball. Tangri and Vanspaul acted as make-shift full-backs on losing possession. Crivellaro had the free role behind a forward line of four players. Chhangte and Fatkhuloev provided the width and had the support of Tangri and Vanspaul from half-spaces. Bengaluru was not budged by these changes and ensured defensive solidity in the centre of the park. Juanan won all the aerial duels (four) along with the presence of Paartalu who guards the backline. He won five out of the six aerial duels, as he provided recurring support in the box while defending. 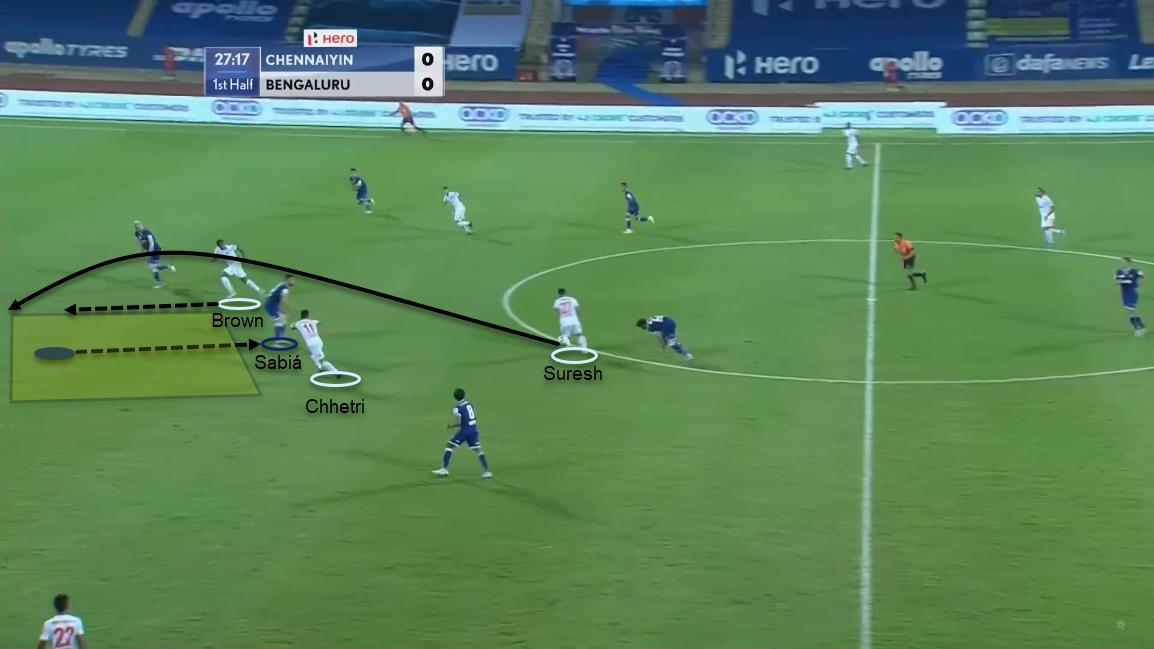 As we discussed before, Bengaluru had very little if not no trouble in ball progression in the first half. They would get the ball in a promising position but couldn’t deliver the optimum final pass. When it came to playing around Chennaiyin’s last line of defence, The Blues’ passes were either too heavy or not precise to take maximum advantage of the situation. Kaith was able to get off his line and collect the passes as the weight on it was too much for the forwards to catch-up. 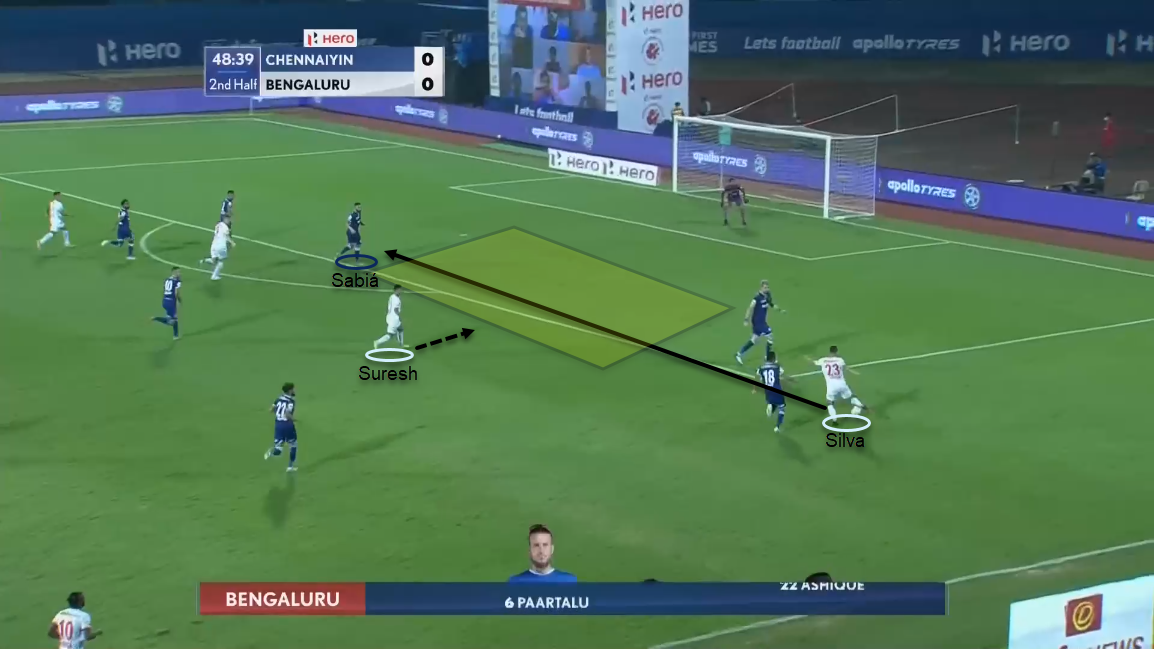 In the second half, they were not able to take full advantage of transition play. Miscued passes and improper decision making can cost them heavily (similar to their performance against Goa in transitions).

Chennaiyin conceded a penalty in the 53rd minute of the game. Vanspaul tried to make a recovery slide tackle inside the box but it, unfortunately, caught Silva’s legs. India’s Captain Fantastic stepped up to take the kick from the spot. He hit it low and hard into the left bottom corner to mark his first goal for Bengaluru this season. 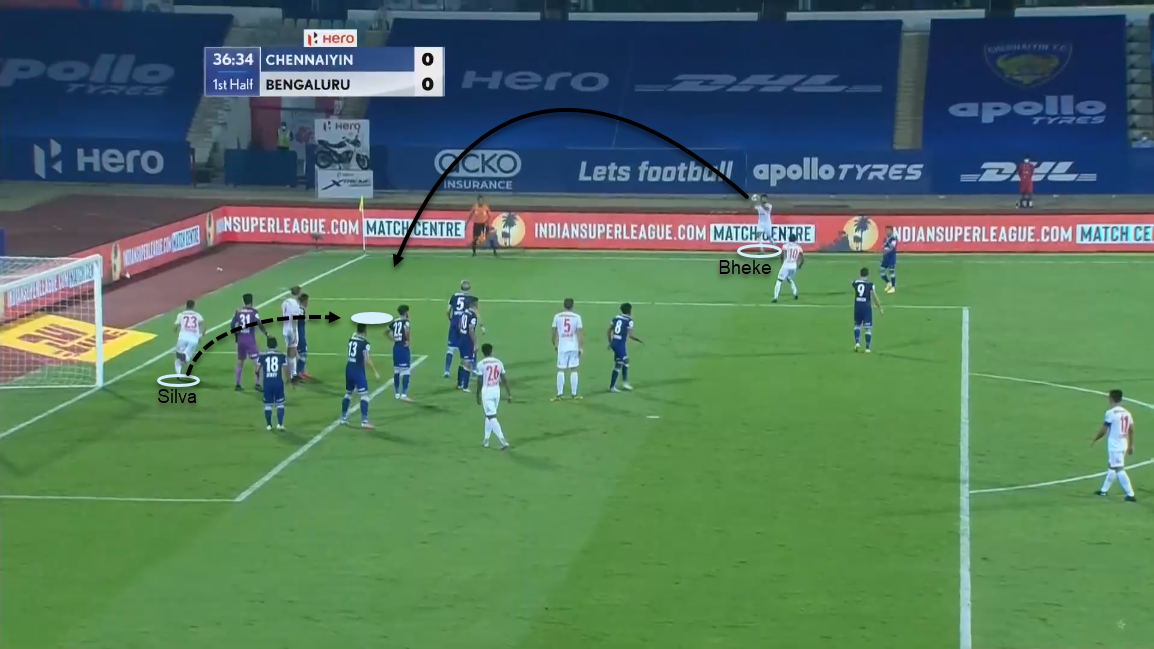 The Blues scored 54% (14) of their goals from set-pieces last season. Under Cuadrat, they have implemented varied combinations making them extremely unpredictable in those situations. To cover this game’s variation, I might have to write another piece but it’s important to acknowledge their combination and threat from dead-ball situations. Bheke’s throw-in was unexpectedly received by Silva who made a run from behind the goalkeeper. He lobbed it back towards Paartalu who flicked his header towards Juanan. The Spanish centre-back won the duel to head it on to the goal. Kaith was positioned wisely to receive it straight into his hands. It is imperative to realise that Bengaluru can create such chances from mere throw-ins.

Well, it is difficult to say for how long Thapa would be out due to his injury but Chennaiyin will surely have to rethink about their tactical plan. The pressing system would need a revamp since the demands are unequal from players. They have a tough challenge ahead of them as they will face Mumbai City next, who are at the top of the table now. Bengaluru’s aggressiveness and energy levels were as high as always. However, its time they start taking their chances and show more quality in the final third. They go up against NorthEast United next who sit third on the table as of now.