Manchester United Women won three important away points at the Madejski Stadium when they faced Reading Women on Saturday. The game ended 1-3 for the Red Devils who consolidated their third spot in the standings which would qualify them to UEFA Women’s Champions League football next season – if they succeed in maintaining their current position until the end of this season. The challenge will be fierce especially from teams like Manchester City and Tottenham who are very close to Manchester United. Therefore, the latter shouldn’t afford to make any drop of points soon even when they’ll face Chelsea. But for now, everything is improving at Manchester United in terms of experience and determination to win and that was clear on the pitch in this match.

On the other side, Reading Women lost three points and lost an opportunity to get closer to West Ham and Manchester City who are just ahead of Reading in the standings. At the same time, the team needs to avoid dropping more points to not let teams like Brighton surpass them since the difference between the two teams is just one point (with a delayed match still not played for Reading). What is more problematic for Reading is that they will be having a very tough schedule in the coming weeks because they will have to face Manchester City, Aston Villa and then Chelsea.

In this tactical analysis article, the analysis will be centred around Manchester United’s attacking and defensive performance while also looking at what did Reading attempt to do in order to resist and try to stop the Red Devils attacks.

Kelly Chambers, Reading’s head coach, preferred to start the game with the 4-3-1-2 formation with Grace Moloney as a goalkeeper, Faye Bryson, Deanna Cooper, Gemma Evans and Lily Woodham in defence, Justine Vanhaevermaet in front of defence, Sanne Troelsgaard Nielsen and Rachel Rowe as central midfielders, Natasha Harding as an advanced playmaker and both Emma Harries and Deanne Rose as strikers.

On the other side, Marc Skinner, Manchester United’s head coach, started the match with the 4-2-3-1 formation relying on Mary Earps as a goalkeeper, Ona Batlle, Diane Caldwell, Maria Thorisdóttir and Hannah Blundell in defence, Jackie Groenen and Katie Zelem as central midfielders, Martha Thomas and Leah Galton on the wings with Alessia Russo being the team’s striker. 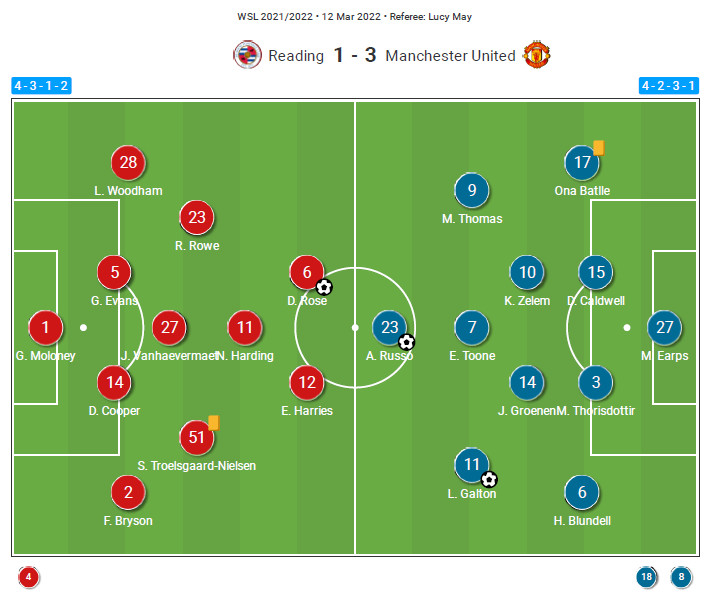 The Red Devils were excellent in terms of finishing and chance creation in this match since they were successful in scoring three goals and in creating eight chances, out of which they had seven shots on target. These numbers show that Manchester United are actually on track from an attacking perspective and that they are succeeding in creating more chances and with more efficiency in the final third. They will need to continue improving their final passes and shooting accuracy in order to obtain more points especially in the direct confrontations with the teams battling for the top three spots, given that Manchester United are yet to make that step forward and start beating those teams regularly.

Manchester United started threatening Reading since the start of the match with a powerful strike from Russo that surprised everyone including Moloney who was thankful that the ball hit the crossbar and went out. It was the first attempt of the match and it was already enough to expose Manchester United’s intentions early on. 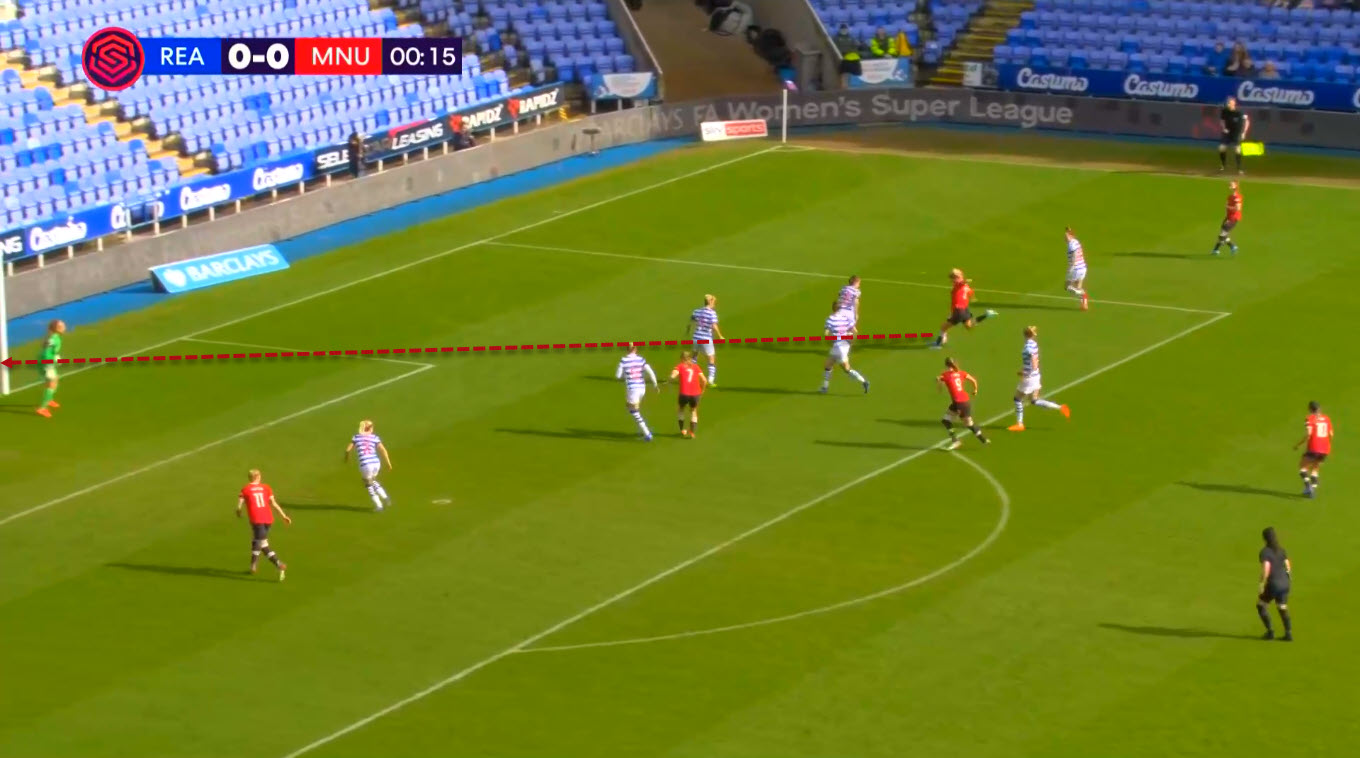 Soon after, Manchester United were able to score their first goal of the match thanks to Galton’s well-oriented header and Blundell’s excellent and accurate cross. This goal just shows Manchester United’s ability to diversify their attacking options and schemes as it also highlights’ Blundell’s great development as a left-back and how she is becoming very efficient on the left wing after she used to play mainly on the right. Moreover, it is never easy to cross with accuracy using the weaker foot even if the player is used to playing on a different wing. Therefore, this goal not only shows that Manchester United are now playing with more ease and variety in attack, but they are also developing their players and making them progress on many aspects. And with more solid performances, confidence will boost these players even further and that will help them a lot when they play against teams like Chelsea and Arsenal. 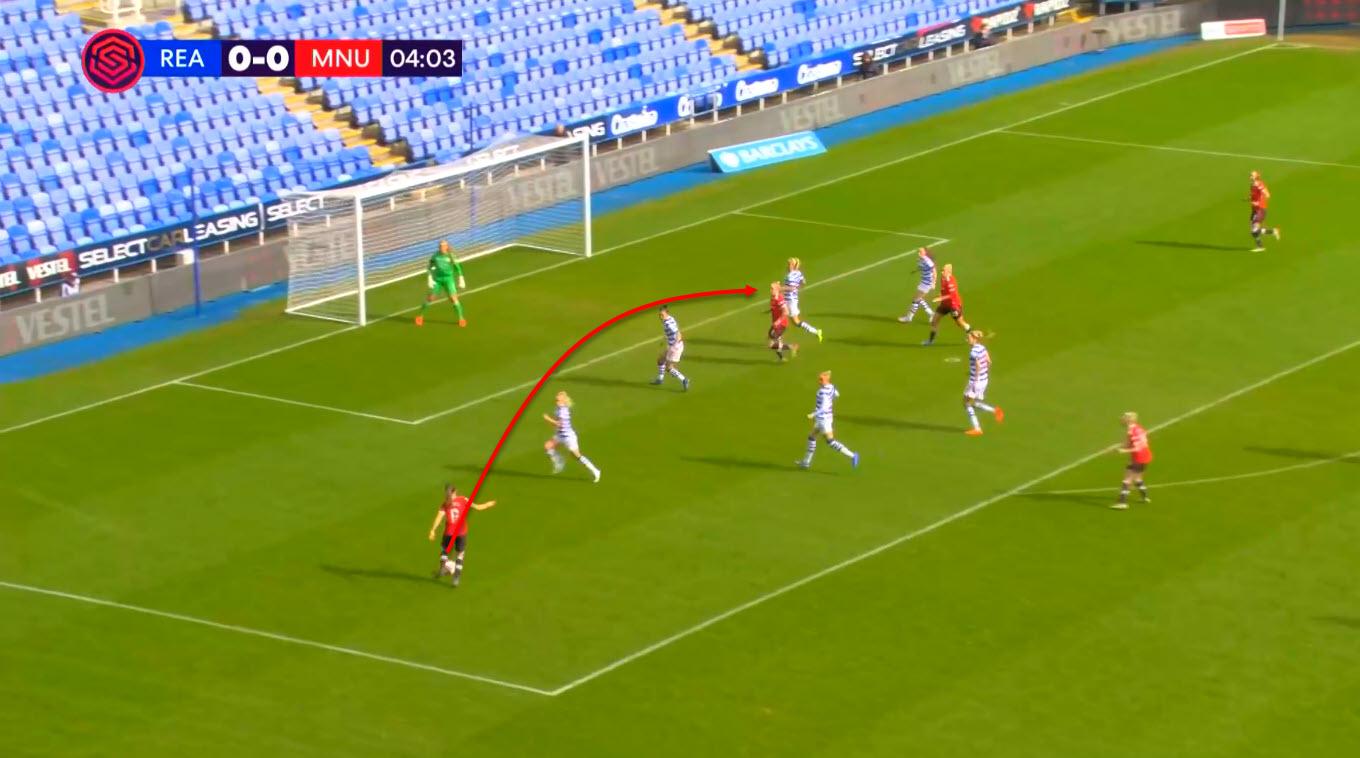 But despite being the source of her team’s first goal, Blundell was also the source of Reading’s equalising goal at the 15th minute when she committed a passing mistake in her team’s own half and gave away the ball to her opponents. Blundell had plenty of possible passing options near her as you can see in the following picture, but she failed to concentrate and provide an accurate pass despite having the time to think and decide in the adequate way. Such errors should be worked on by Marc Skinner in order to avoid this kind of mistakes in the future, since such things can be so valuable at the end of the season as this is what makes the difference between the teams and the quality of players. At times, a similar error can decide a team’s fate in a season and that’s why it is fundamental to allocate time and focus on decision-making, mental preparation and everything that can cause such mistakes during games. 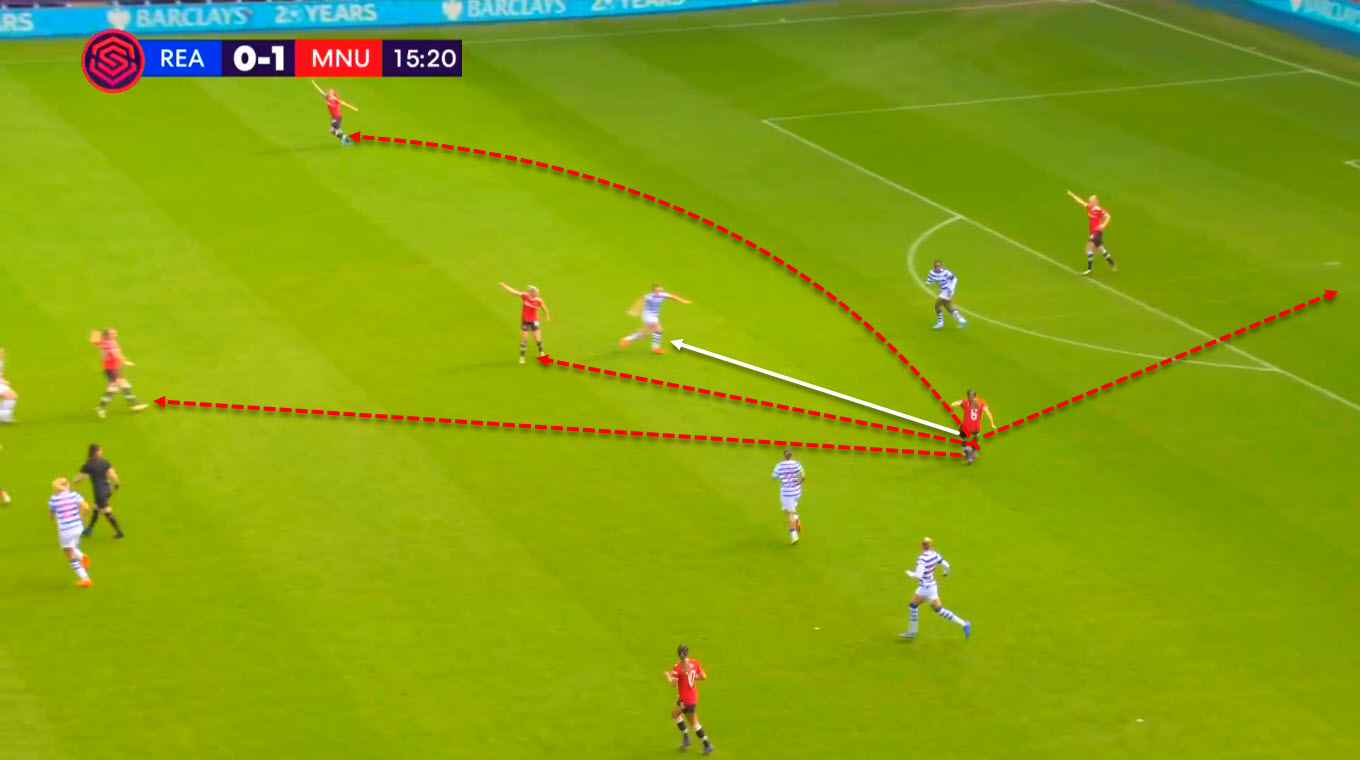 But despite conceding a goal, Manchester United didn’t show any signs of doubt and continued their attempts to score, which they succeeded in doing at the 24th minute thanks to an excellent assist from Russo who played a different role this time by being a striker who retreats to act like a number 10 and serve her teammates. This change of roles helped Galton in penetrating towards the box and finding herself alone in front of goal. Galton’s asking for the ball before even surpassing her direct opponent was key in this action as it helped Russo in deciding about her pass early to not fall in the offside trap. Such goals put the stress on the variety of Manchester United’s attacks and show that Russo can play a major role in attack at this team, since she is not only good in finishing and in playing inside the box but she can also be crucial when retreating and serving her teammates. 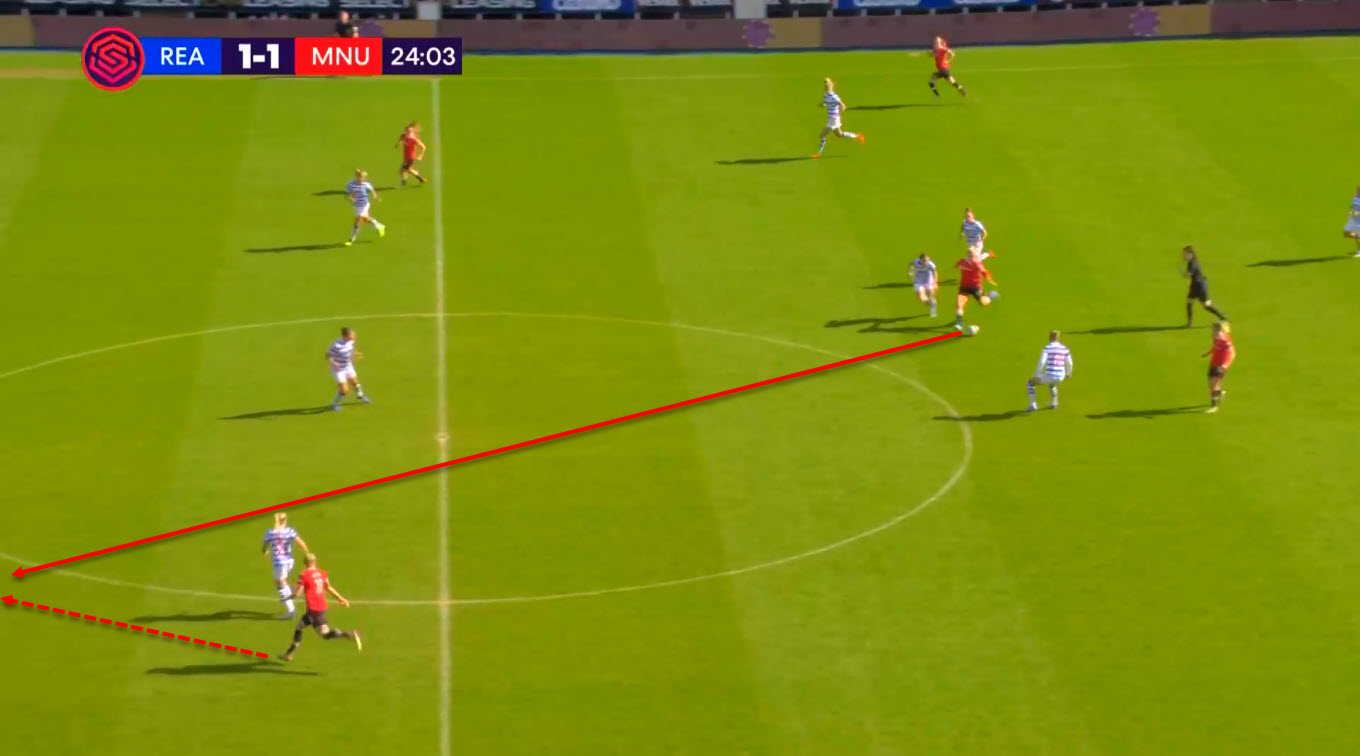 It is true that Reading’s defenders made a lot of efforts in their attempts to resist against Manchester United’s attacks in this match. But, some mistakes led to a lot of conceded chances and danger and that could have led to a worser final result for the locals. For instance, Reading’s defenders were too slow in defending against Russo at the start of the match, giving her enough space for shooting and not even reacting when they saw her shooting movement. A sliding tackle could have deviated the shot or prevented it from reaching the goal.

Moreover, Reading left too much space for Galton in the first goal action as they did not expect an accurate cross from Blundell at that timing. As the picture shows, Reading’s defenders should have attempted to intercept the cross or move closer to Galton in order to disturb her and prevent her from touching the ball, instead of giving her the time and space to direct her header and score. 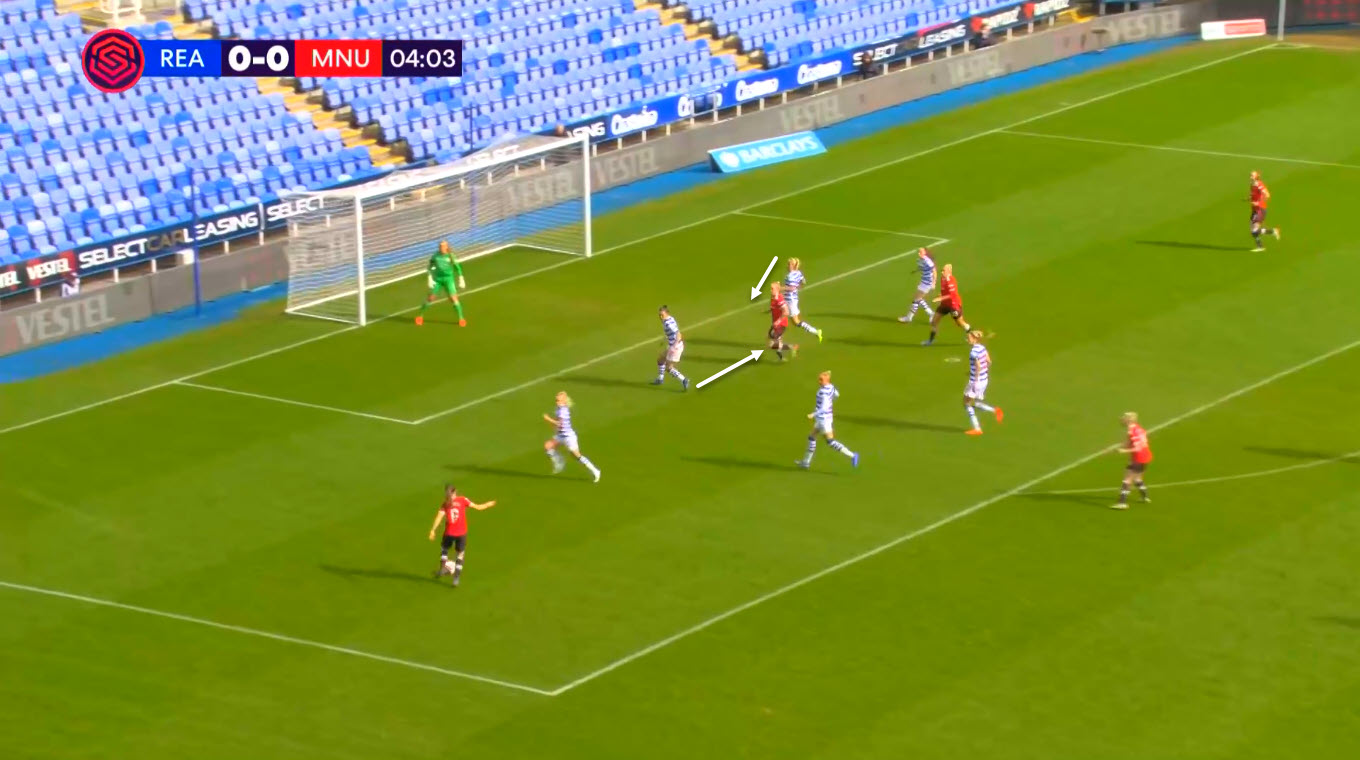 During Manchester United’s second goal action, Evans was more worried about the offside position of Galton then of actually chasing her direct opponent before protesting. This attitude costed Evans some precious seconds or half-seconds and allowed Galton to continue her run without disturbance and therefore dribble past the goalkeeper with ease and score. Reading’s defensive attitude should be more decisive and more intelligent if they want to concede less goals in the future, and avoiding such errors can help them do so. 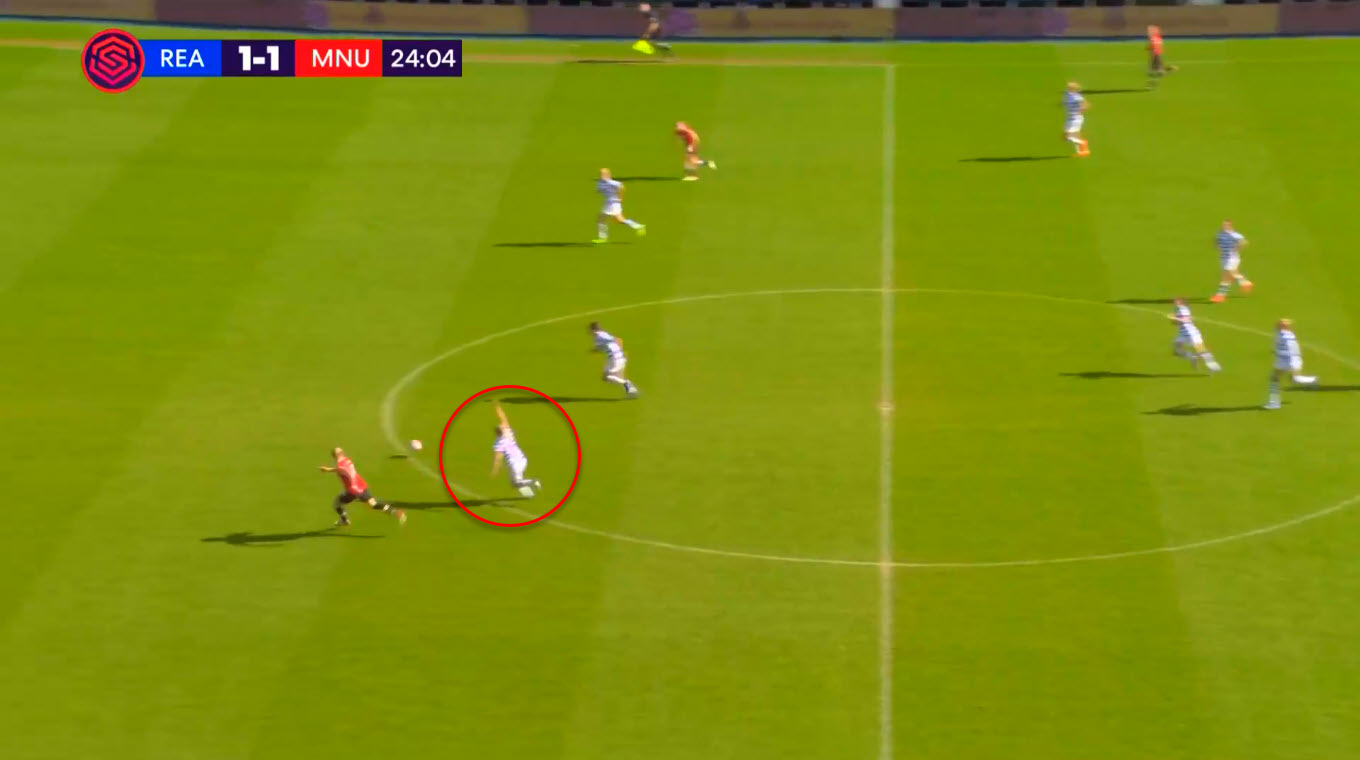 Moreover, the team needs to know exactly when to play with high defensive line and when to avoid keeping the line so high in order to not concede counter-attacks at the back of defence, which happened numerous times during this match, such as in the second-goal and in the following chance, when three Manchester United players found themselves in front of goal and the whole Reading’s defensive line was behind. 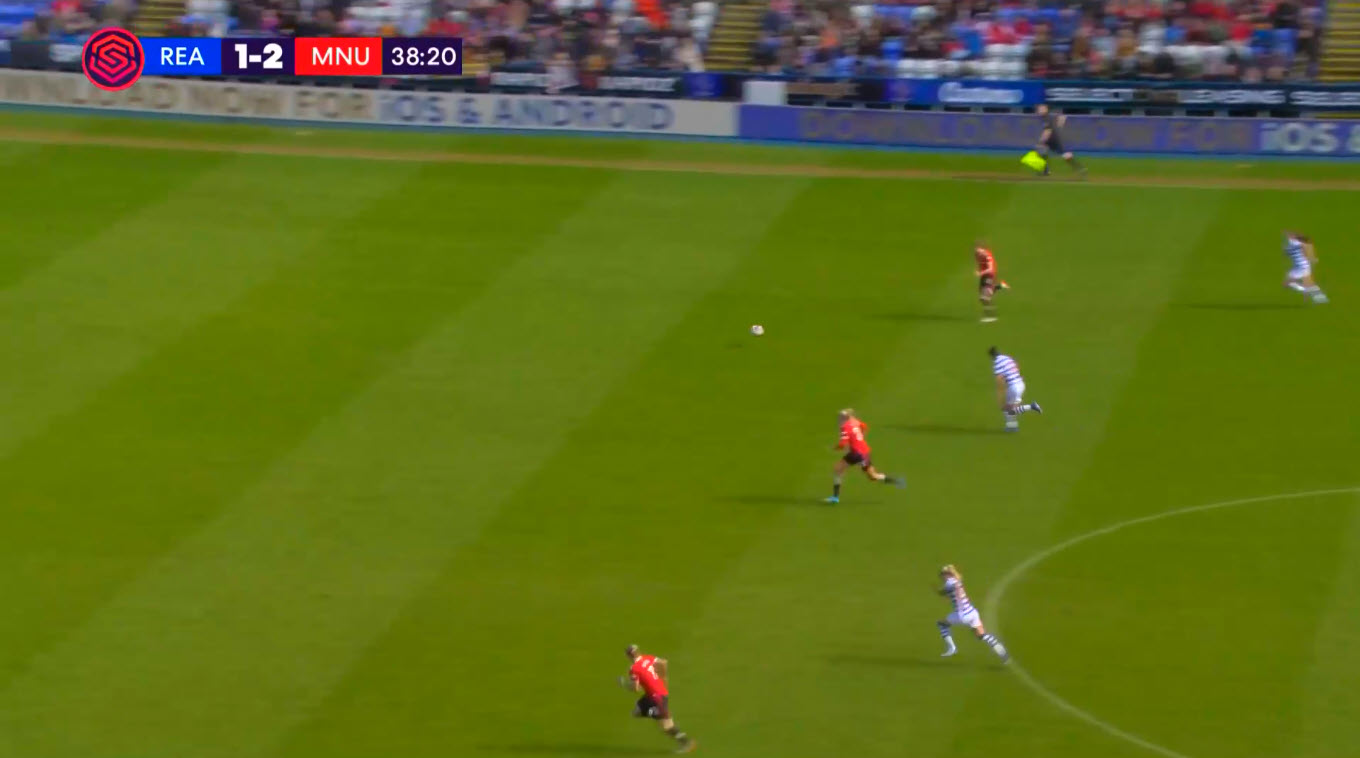 Manchester United won an important away match and most of all, they won a lot of confidence and attacking variety that should be exploited and used in the upcoming games. But at the same time, the team needs to avoid unnecessary concentration mistakes in defence in order to not give away crucial points in their course to an UEFA Women’s Champions League spot.

On the other hand, Reading should not be ashamed of their performance but they have to work further on improving their defensive organisation as well as their decision-making at the back in order to concede less and cause problems to these powerful attacking teams in the future.