Billy Sharp is now coming to the tail end of his career after reaching 36-years-old in February. Most players would be winding down their careers and looking forward to the future without football. However, Sharp has turned the narrative on its head as he continues to score or assist in the Championship. Sharp has changed his playstyle to incorporate more of his mental abilities to compensate for his depleting physical skills. This scout report will analyse how Sharp has grown as a player. Plus, a brief tactical analysis to see how Sheffield United‘s tactics help embrace Sharp’s talents.

How do Sheffield United play?

Sheffield United’s preferred tactic is 3-5-2, with Sharp occupying one of the two strikers. The other striker in the partnership is usually Ollie McBurnie or David McGoldrick, who are more athletic than their older colleague; that is not to say Sharp is a physical slouch.

Despite Sheffield United’s fantastic passing play, their tactics do not strictly demand a rigid passing philosophy. United rank second in terms of crosses as they like to work the ball into the wide areas. Players like Manchester United academy graduate Oliver Norwood(21), Ben Osborn (24) and Gibbs-White (29) all are great at successfully crossing the ball.

Sharp, historically, has had a great header of the ball, with him only needing three more to get to 50 in his career. Despite this, Sharp has only scored two this season. Maybe the crosses have not helped Sharp score this season, as he has only scored with his head twice this season. However, Sheffield United do not exclusively cross the ball with the intent of a striker heading the ball. Sheffield United are first in terms of low crosses within the Championship this season. 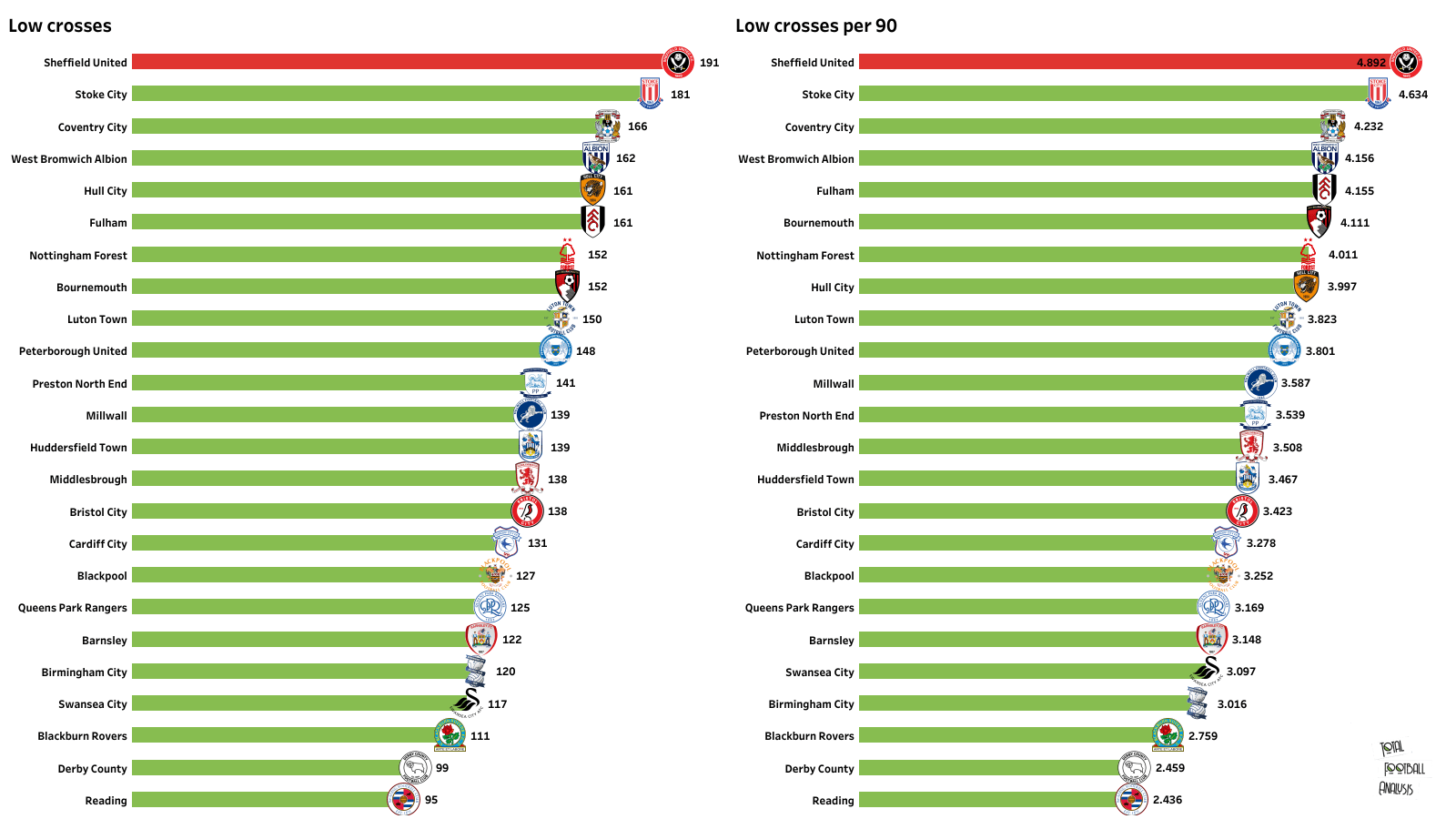 Billy Sharp is adept at shooting, scoring 14 times from 58 shots. This gives him a 24% conversion rate similar to Championship star Aleksandar Mitrović (25%). Sharp is also the second-best goal-scorer of all Championship players at 30 or over. This season, Sharp has the most goals out of any player at Sheffield United. 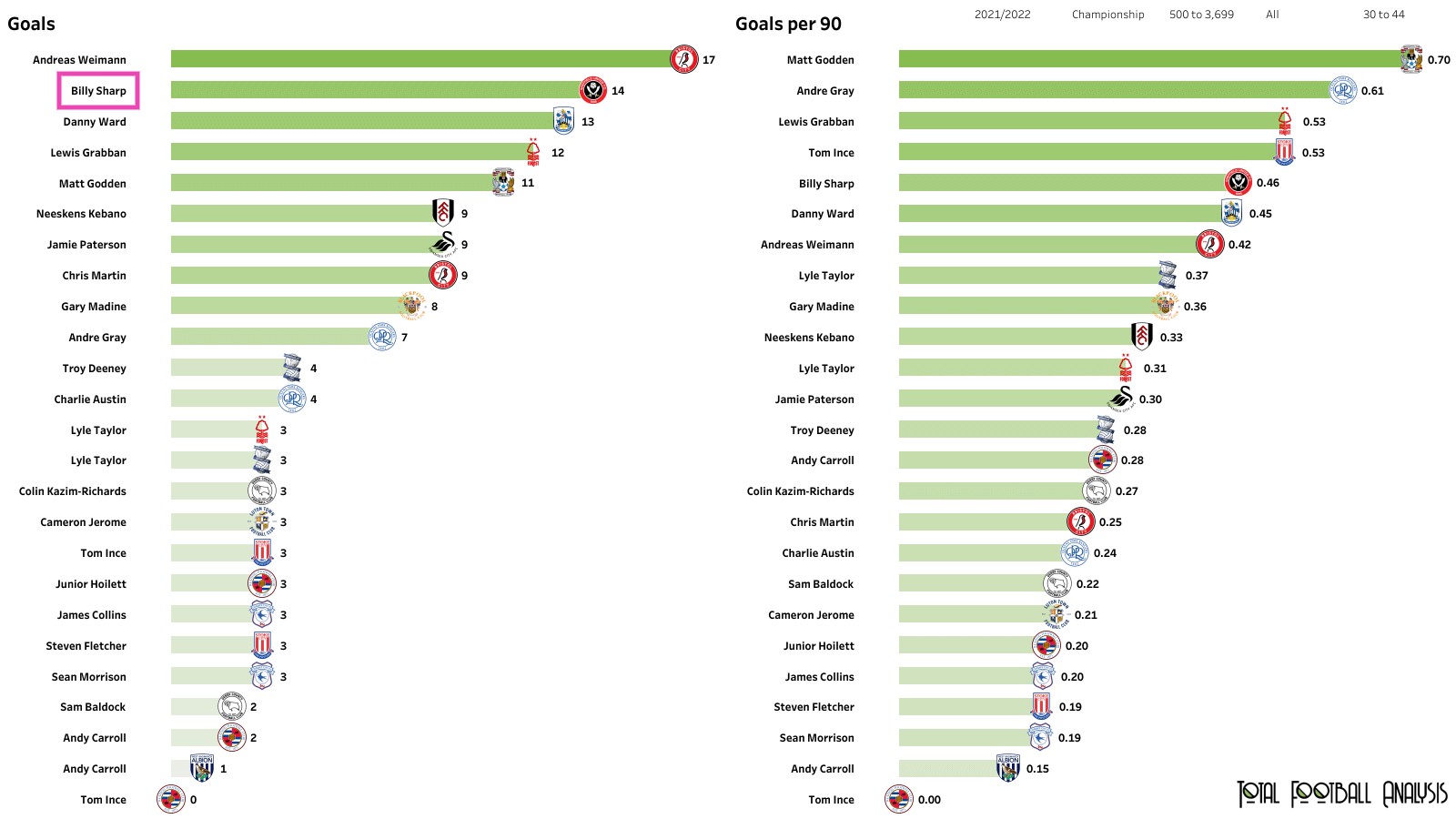 Sharp’s numbers become more staggering when you look at the bar charts below. 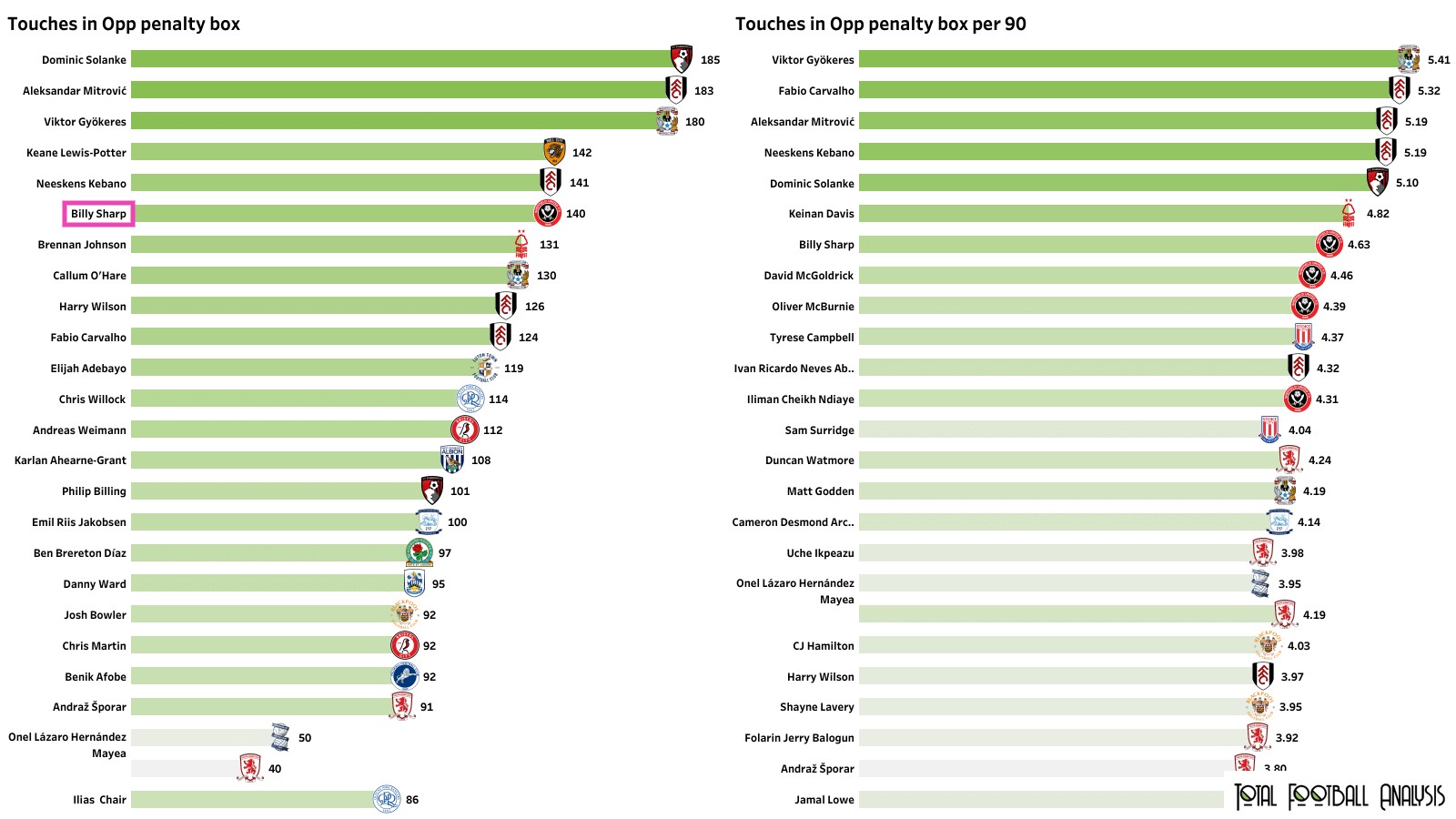 Because of Sharp’s skills in front of goal, Heckingbottom does not make the striker affect the link-up play. Therefore, Sharp can focus all of his efforts on scoring goals.

Being 36-years-old, Sharp needs to get every advantage he can. Sharp’s runs and positioning is fantastic, and sharp loves this space in-between the furthest central defender and the full-back nearest to the CB. For example, look at this example against Nottingham Forest.

First, Sharp sticks close to the central defender. He positions himself in that area so that if a cross comes into the middle of the box, Sharp can get to the ball quicker than if he stood close to Djed Spence. Sharp sees the movement of the central defender and stays his space within the pink box.

Gibbs-White will cross the ball into Sharp. This is despite the run from Liverpool loanee Ben Davies or Daniel Jebbison. Sharp is still standing in the area between Spence and Joe Worrall as he feels confident that he can score from this position. 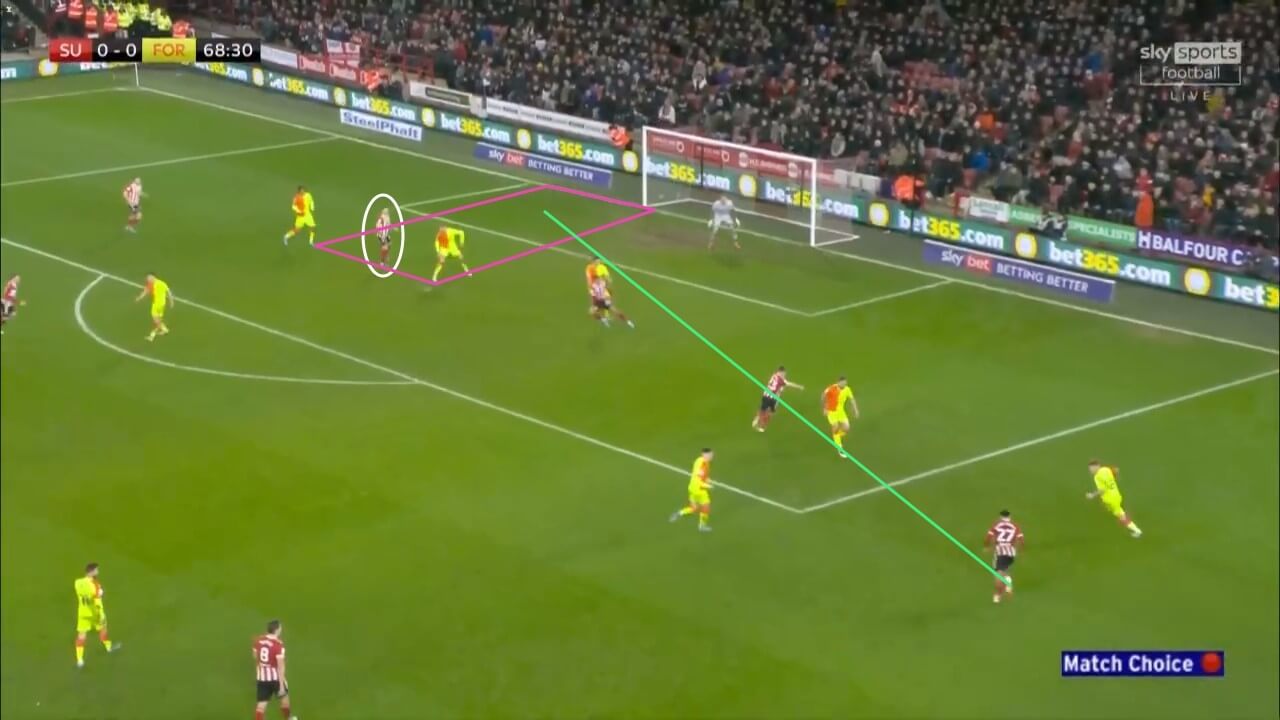 Sharp would then head the ball home from Gibbs-White’s sumptuous cross. This cross is hit into the back post as Gibbs-White sees Sharp’s great position. 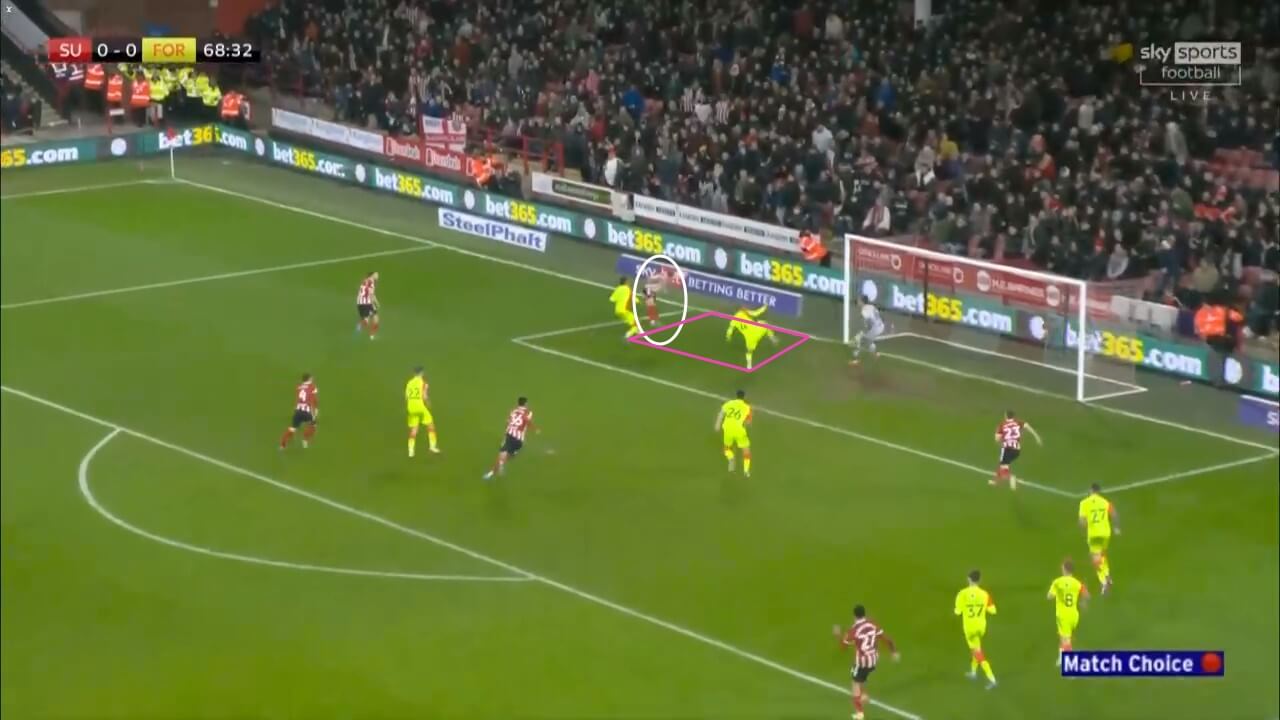 This is not a one and done movement either. Sharp is fantastic at getting into these spaces. For another example, look at Sharp against West Bromwich Albion. Sharp is stood in the same area again, and he is nearer to the central defender. Then, Sharp moves towards the opposition full-back because he needs to make space away from the central defender. Sharp does not receive a cross. Instead, he gets a pass to his feet and scores with a thunderous shot.

Another example of Billy Sharp standing in his preferred position was when Sheffield United played Hull City. Again, Sharp stays in his favoured position throughout the build-up, and sharp then receives the ball and scores from close range.

What have we learnt?

Sheffield United’s tactics allow Sharp to continue playing football to a high level. Keeping the ball on the floor enables Sharp to conserve energy by not competing for high crosses. Sheffield United does play crosses into the box to get the ball to the wide areas, but they prefer to play the ball across the floor when possible.

Sharp uses his excellent positioning to make it easy to score goals from crosses. Instead of years gone by where Sharp would challenge the opposition defender, often successfully, Sharp is smarter with his attacking movement. Sharp’s movement allows him to get on the end of crosses without dealing with a defender.

A real talent for Sheffield United throughout three spells spanning 11 years, Sharp is playing some of his best football to date. Who is to say he can’t continue and help Sheffield United’s push towards the Premier League?