In this tactical analysis article, we will delve deeper into the tactics of both teams during this match while focusing on the strong first-half performance of Manchester City and on the comeback of Manchester United and what led to it. This analysis will also point out the players who made a difference for their teams and made life harder for their opponents.

Casey Stoney chose to start this derby with a few changes from the last game against Arsenal but with the same formation; the 4-2-3-1. Mary Earps was the team’s goalkeeper, Ona Batlle played as a right-back, Amy Turner and Millie Turner as centre-backs, and Leah Galton as a left-back.

The midfield consisted of Hayley Ladd and Jackie Groenen as central midfielders and in front of them Jessica Sigsworth, Ella Toone played as an advanced playmaker with both Jessica Sigsworth and Tobin Heath on the wings. And Christen Press played as a striker before getting subbed to Lauren James on the 55th minute.

On the other side, Gareth Taylor preferred to play according to his preferred formation with Manchester City, which is the 4-3-3. The team played with Ellie Roebuck as a goalkeeper, Lucy Bronze on the right flank, Steph Houghton and Alex Greenwood as centre-backs and Demi Stokes as a left-back.

In midfield, Keira Walsh, Sam Mewis and Laura Coombs were the three midfielders who contributed both in attack and in helping the defence and winning the ball back. And in front of them, Chloe Kelly played on the right-wing, Georgia Stanway on the left-wing and Ellen White as a striker. 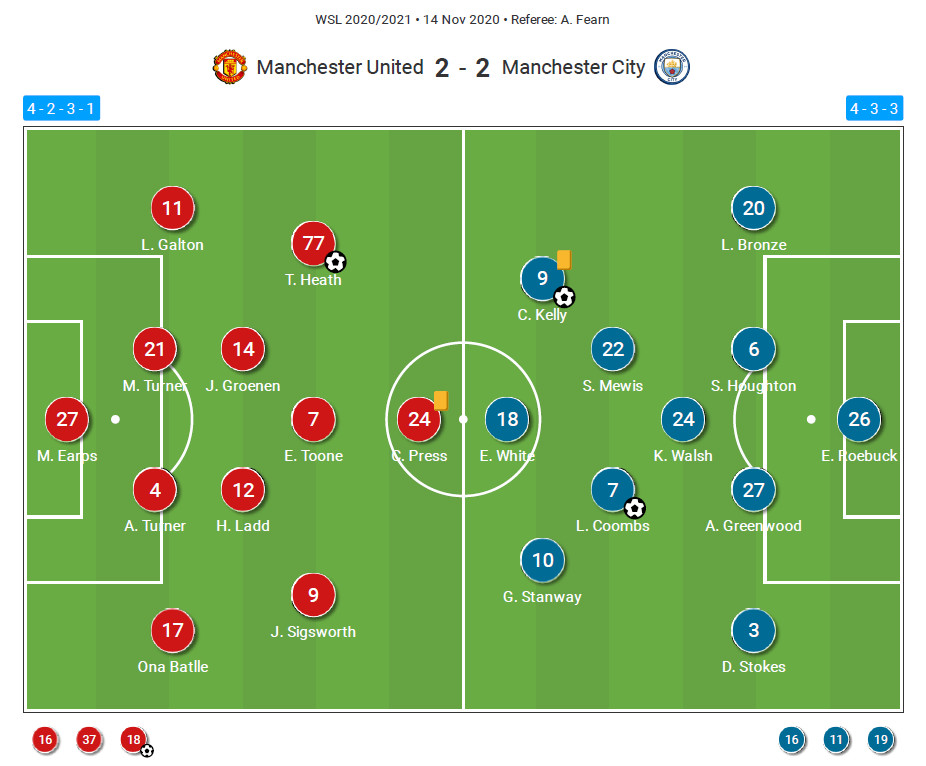 Manchester City started this match in the best possible way by surprising Manchester United with the fast build-up and especially by penetrating from both flanks to reach midfield and then advance through Kelly, Stanway or White.

And in this regard, Stokes and Bronze were fundamental in escaping Manchester United’s high pressing which wasn’t as successful as in their last match against Arsenal. And therefore, through Stokes and Bronze’s quick exchanges with Mewis, Walsh, Coombs, and then Stanway and Kelly, Manchester City reached the final third quite often during the first-half.

You can see in this picture how Stokes not only helped in getting rid of the opponent’s pressing in their own third but also in midfield and attack by overlapping and running into the free space to get a pass and provide an option for her pressed teammate. Actions like these were repeated in this first-half and were the source of many chances for Manchester City. 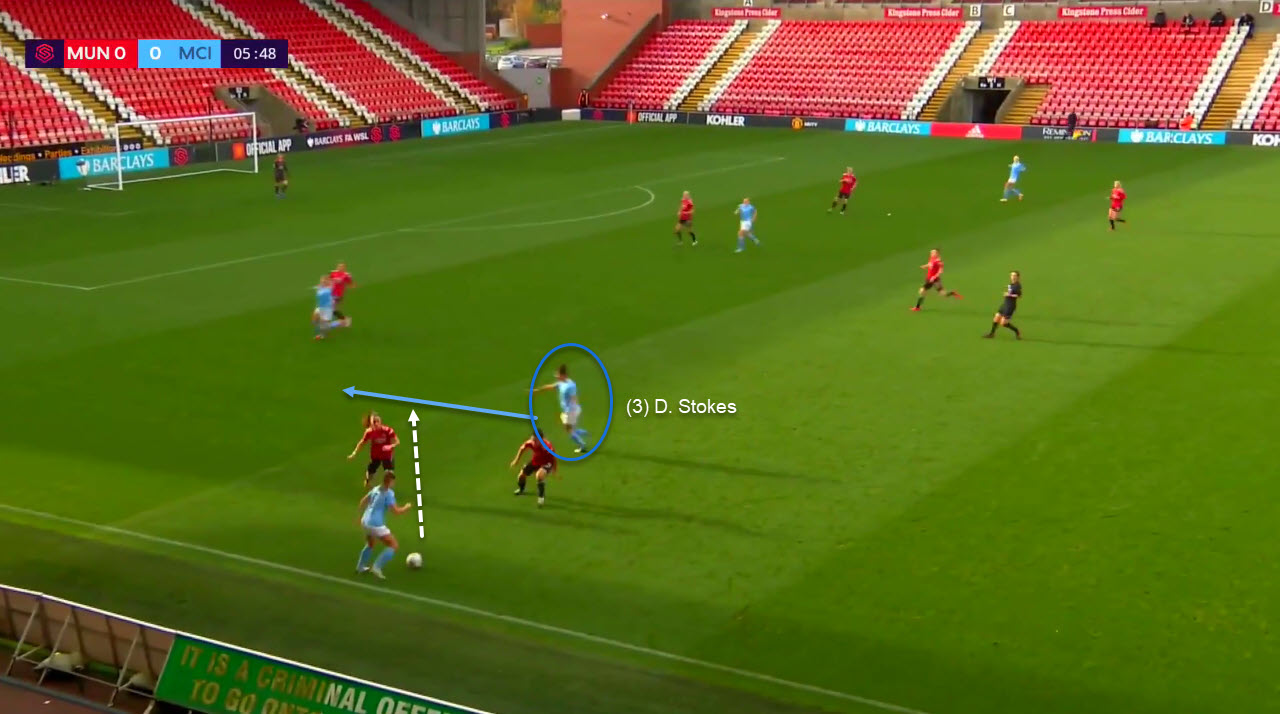 Moreover, when the full-backs were marked, Manchester City waited for some movement off the ball from midfielders. However Manchester United made sure to mark them so often, but they did not expect to see White dropping back to her team’s own third to receive passes and unblock the situation by protecting the ball and passing to her unmarked teammates.

White excelled in this role which was not really apparent since everyone waited for her to be only waiting to get the ball in the box. But she played a huge role in making Manchester United’s pressing ineffective in many instances, and this was very important for the team since it helped them in succeeding in the build-up and in creating many goal scoring opportunities. 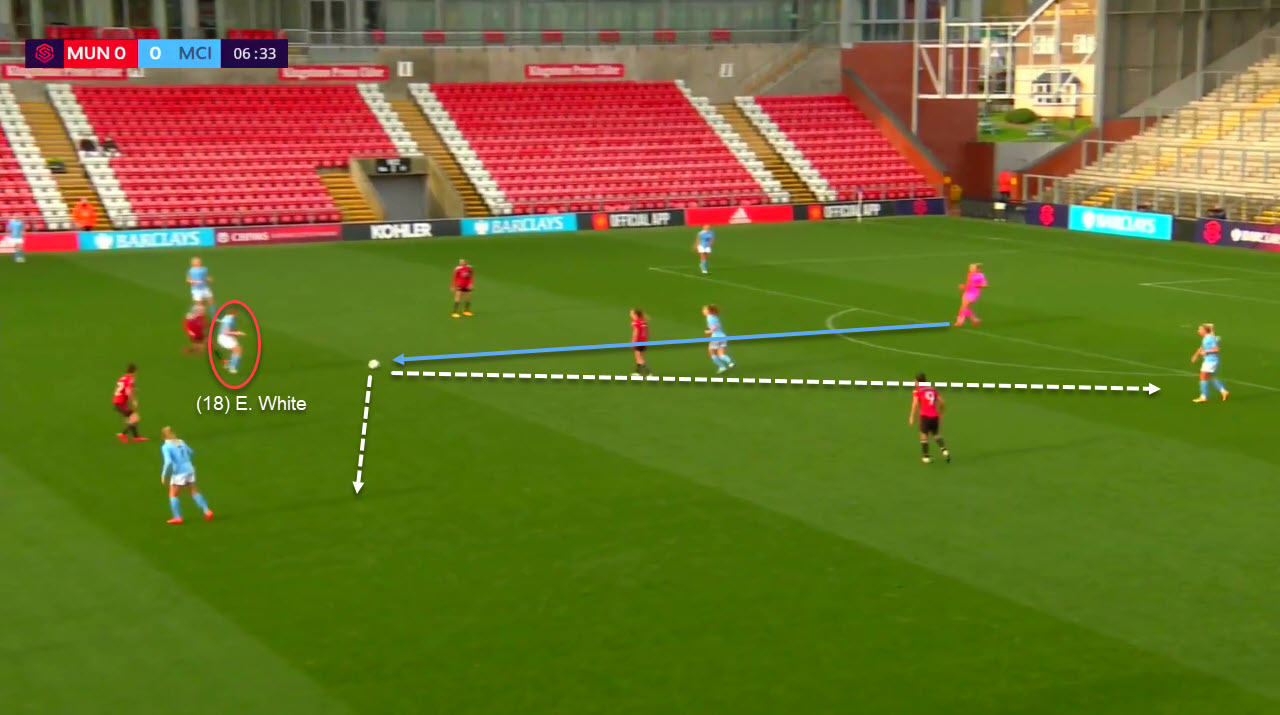 Something else needs to be addressed concerning Manchester City’s first-half performance, and it is their set-piece execution. Greenwood’s crosses were often accurate during this game and also during the previous matches, and this added a strong weapon for the team in attack even though their goals did not come directly from set-pieces.

Not only that, following Bronze and Stokes’ passes from both flanks, Coombs, Mewis often found themselves with a lot of free space in front of them since Manchester United’s pressing was always very high. And this resulted in a numerical superiority for Manchester City during many attacks like the one shown below.

After Stokes’ pass to Coombs which eliminated two opponents, Coombs found herself in a cleared path, and she saw Stanway unmarked too and with a lot of free space. Coombs passed to her, but the latter was not able to score it even though she was able to do it. And this was one of many missed chances from Manchester City which they regretted at the final whistle. 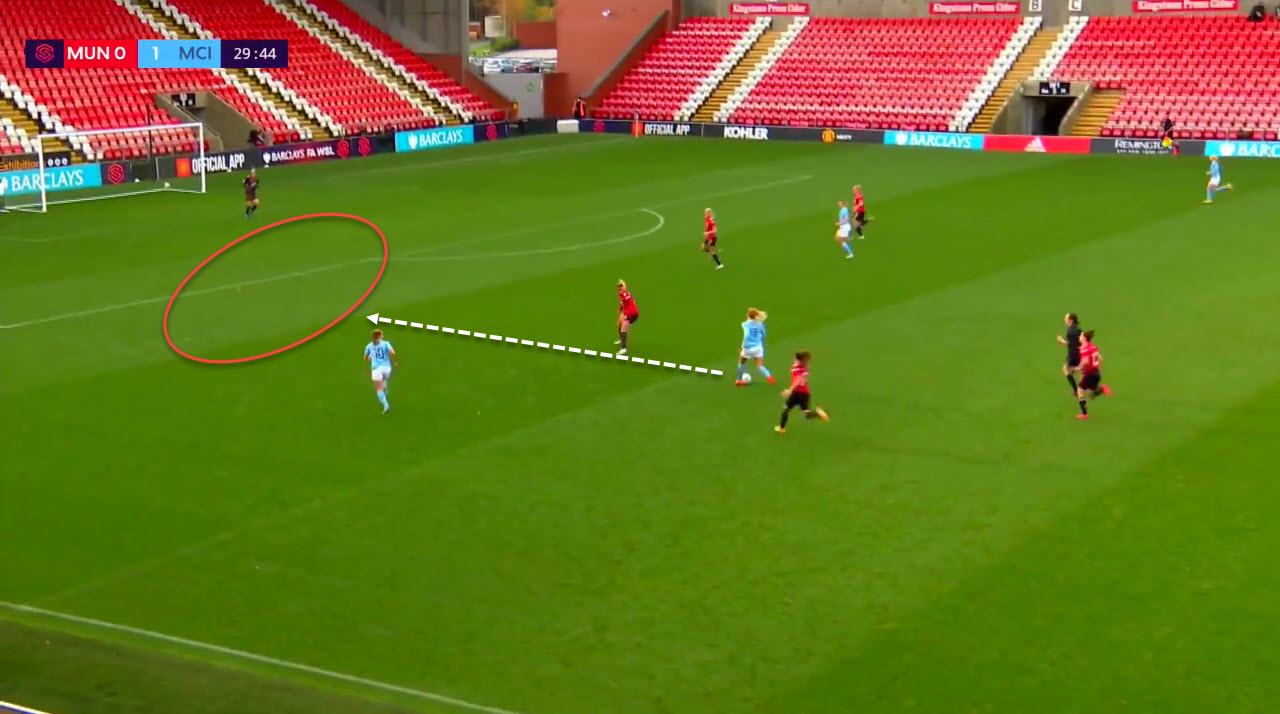 It is also worth noting that both Manchester City goals came from Kelly and Coombs’ individual talent after missing some real goal-scoring opportunities emanating from both wings or from Mewis and Coombs’ penetrations in the final third. And this shows the quality and talent of the players that this team has and if these players play together a bit longer and have more chemistry, they can become a really stronger team that can rank high in the league and reach advanced phases in UEFA Champions League.

And concerning the team’s positioning, when they were out of possession, the players played according to a 4-2-3-1 formation since Coombs had the mission of marking Ladd continuously. And that’s why Coombs was always near Ladd to prevent her from receiving the ball while Mewis and Walsh were defending behind her, as you can see in this picture. 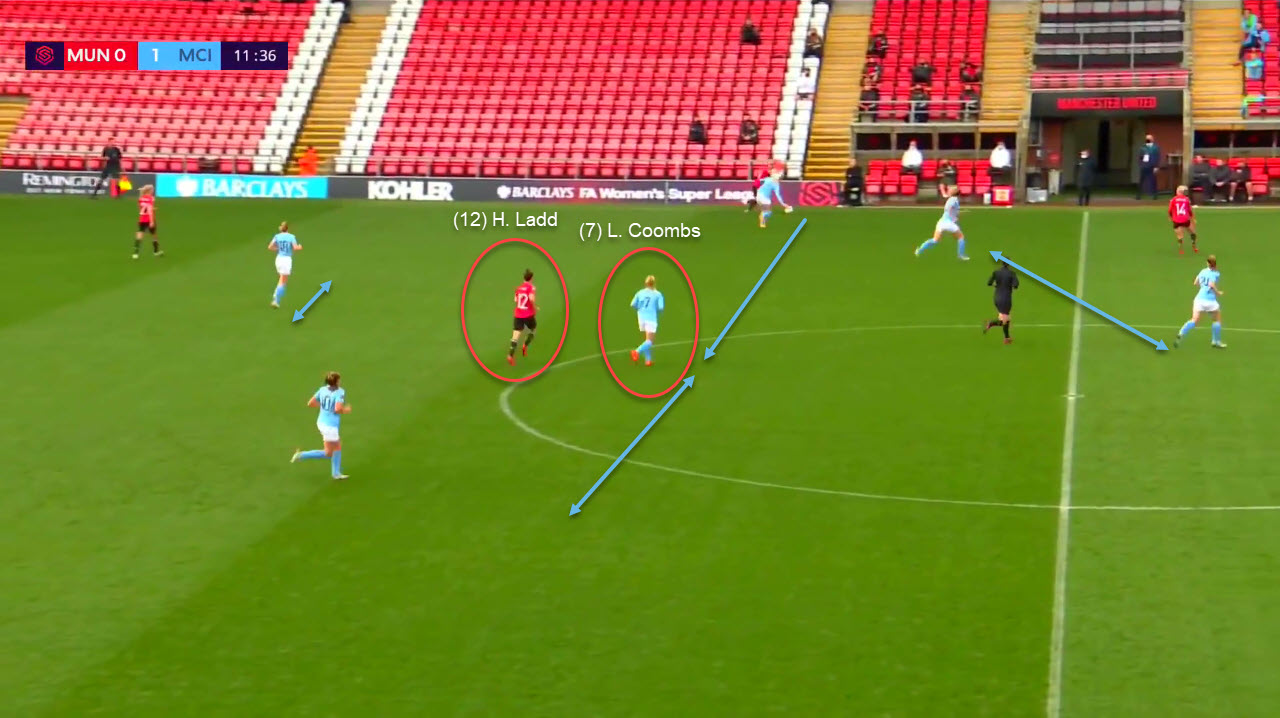 And overall, Manchester City were more aggressive on the ball and faster in passing during this first-half, which made them able to score two goals and lead before halftime.

As opposed to their average first-half performance, Manchester United started the second-half with a different approach. And the credit here goes to the coaching staff and to Casey Stoney in particular. By subbing Kirsty Hanson on to replace Sigsworth, the team looked better in attack and were able to press effectively on Manchester City’s defence to create opportunities and score before it’s too late.

This pressing was fruitful at the 53rd minute when Heath was able to intercept Bronze’s wrong pass and shoot. What is worth noting however is the determination and organisation of this pressing, because at the first-half Manchester United were pressing too but their pressing was not as organised as in the second-half and it did not create problems for Manchester City.

But during the second-half, Manchester United’s pressing was focused on both flanks with many players whenever the full-backs received the ball. And as you can see in the picture below, the goal action started from this pressing of Groenen, Heath and Press. 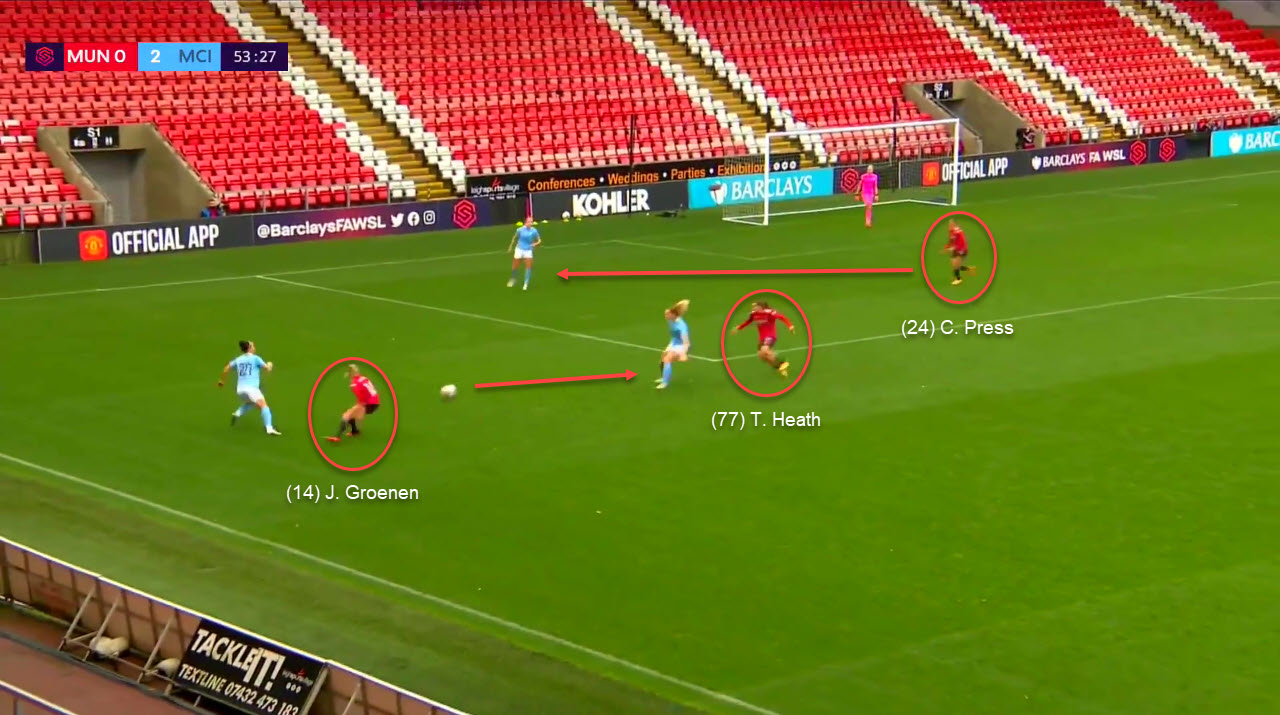 On the 55th minute, Lauren James replaced Press to provide more depth, skills and physicality to Manchester United’s attack. James helped the team by her continuous presence in dangerous positions which obliged Manchester City’s defenders to mark her, and this gave space to the wingers and to the midfielders coming from behind to enter the box and get more space.

Moreover, her technical abilities helped her in dribbling past opponents; however, at times she overused these dribbles. In other words, at some opportunities, James kept hold of the ball more than necessary when she was able to give key passes to teammates in better positions.

For instance, in this example, James dribbled past two Manchester City defenders and found herself in this position, but instead of passing to Toone who was in an excellent position and was ready to receive the ball, she preferred to turn back and pass it backwards. Therefore, tactical maturity in these kinds of opportunities should not be overlooked as it can help the team become even stronger and more effective in the attacking phase. 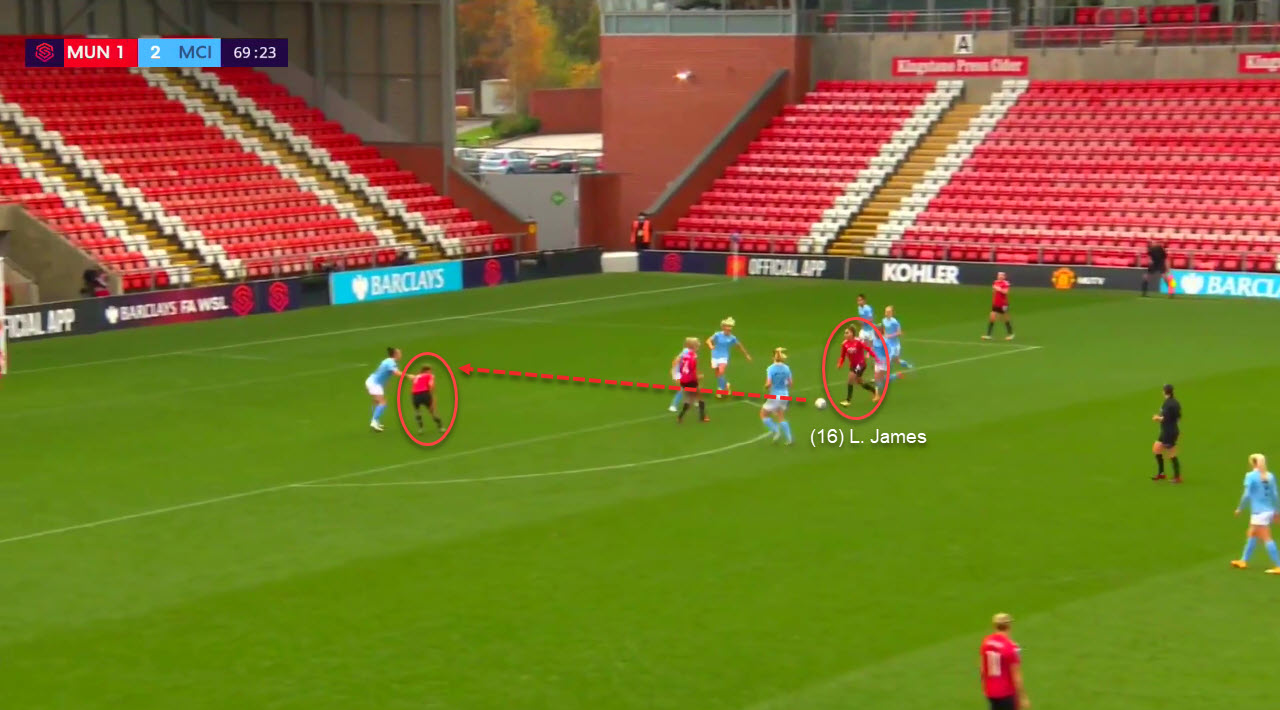 Following this, Hanson’s goal from a corner-kick came, and Manchester United completed their comeback. Hanson not only scored this goal but she also helped the team a lot through her pace and accelerations on the right-wing and by crossing several times to the box, but Manchester City’s defenders were attentive enough to intervene before Press and then James could reach the ball. And here’s an example of how Hanson was able to have an advantage over two opponents and cross the ball despite being tightly marked. 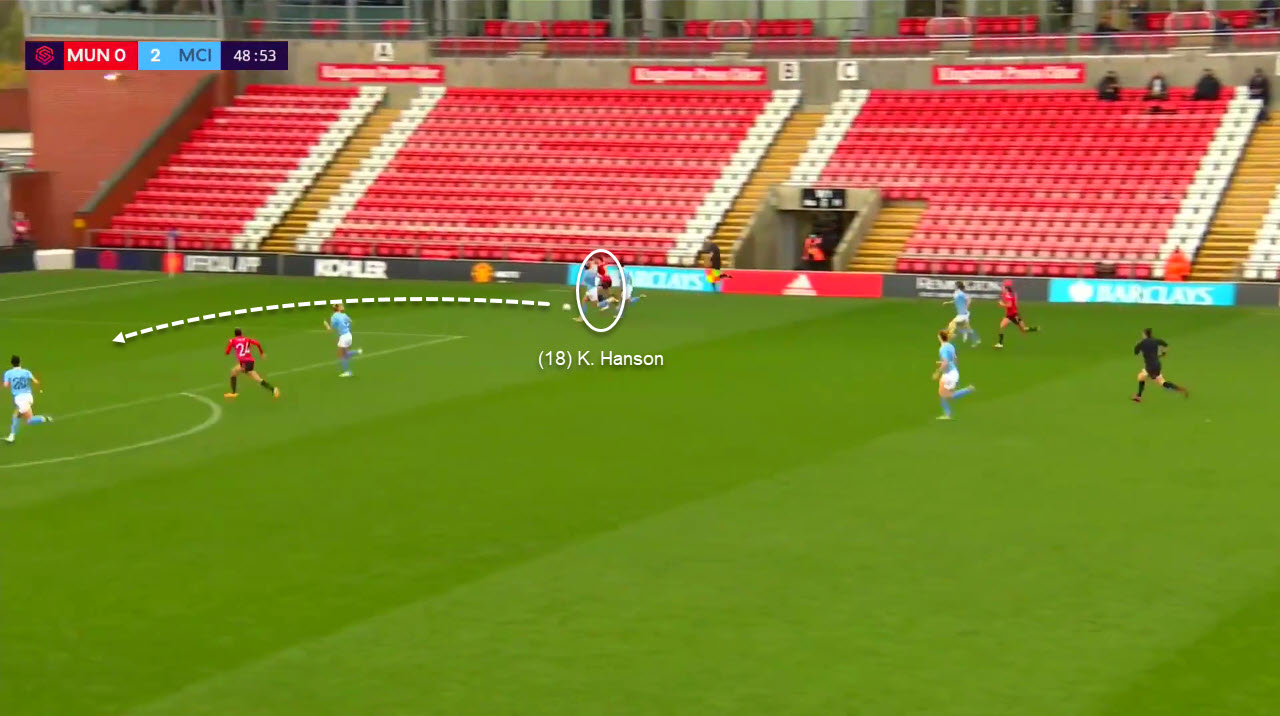 We can say that the result was fair if we consider that both teams played well, both scored, both created chances and both missed many chances. Manchester City had many scoring opportunities in the first-half, and Manchester United also had some real goal-scoring chances, especially Lucy Staniforth’s 89th-minute header which was saved by Stokes, not even by the goalkeeper, as you can see in this picture. 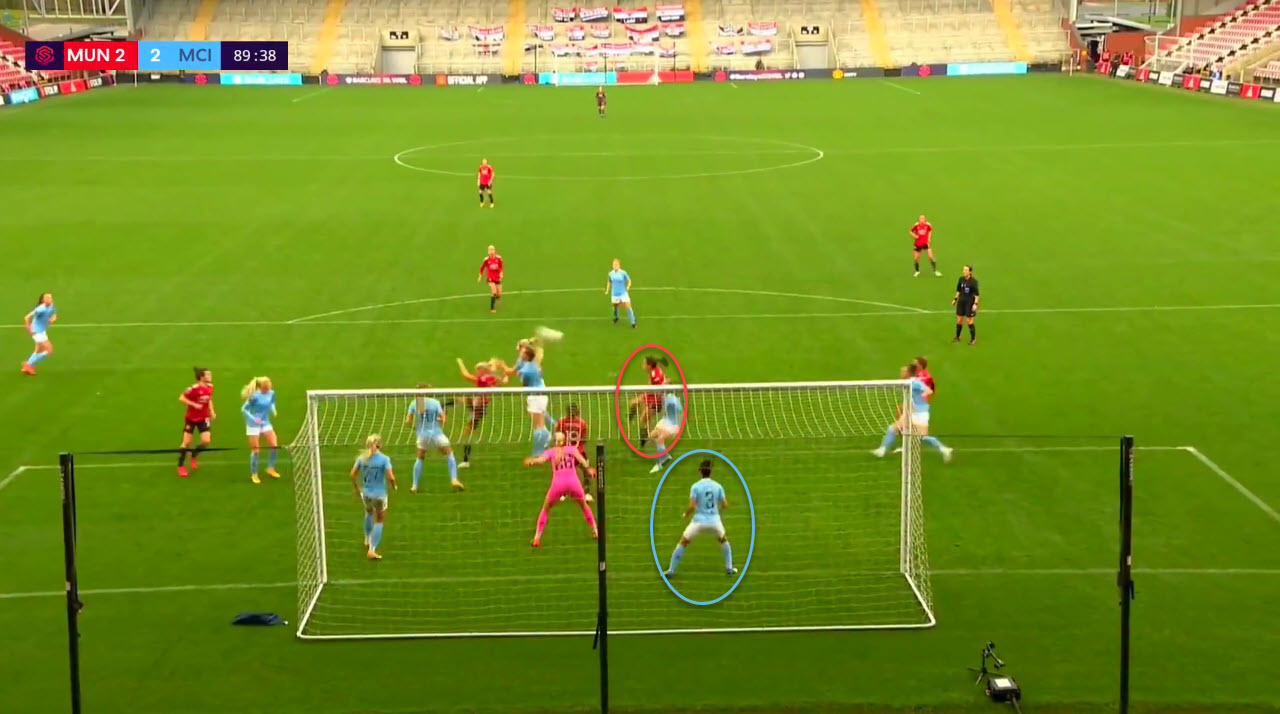 Yet, both teams need to revise and correct many things if they want to do better in their upcoming matches, because both teams played a good half and their performances deteriorated in the other half, and this could have been worse for both teams.

So for Manchester City, they should have “killed” the match when they had the opportunity to do so in the first-half, and they should work more on their finishing skills as well as their defensive compactness since during the whole second-half, Manchester City looked a bit fragile at the back. And they could have conceded more than two goals, and this was also due to the lack of midfielders’ defensive support against Manchester United’s attacks.

On the other side, Manchester United should work on starting their matches with a more determined mentality and strategy to avoid giving away too many balls to their opponents. Even when pressing high on their opponents doesn’t work, the team should find in-game solutions instantly and not at halftime, for instance by dropping their pressing line to midfield and making spaces tighter for their opponents even when they get away from the pressing.

But overall, Manchester United should not be blamed a lot since they were able to make a very demanding comeback against Manchester City and not any other team, which was in itself an achievement for the Reds.

This draw kept Manchester United at the top of FAWSL while Manchester City are now fifth and are aiming at ameliorating their rank as soon as possible to compete for UEFA Champions League spots and why not fight for the title. And Manchester United need to conserve their lead of the league and support it with further wins if they want to be serious competitors with the likes of Arsenal and Chelsea.