Italy and Poland met on this Sunday’s UEFA Nations League match. Italy dominated the game while Poland had one player sent off in the second half. In the end, Italy won with a 2-0. 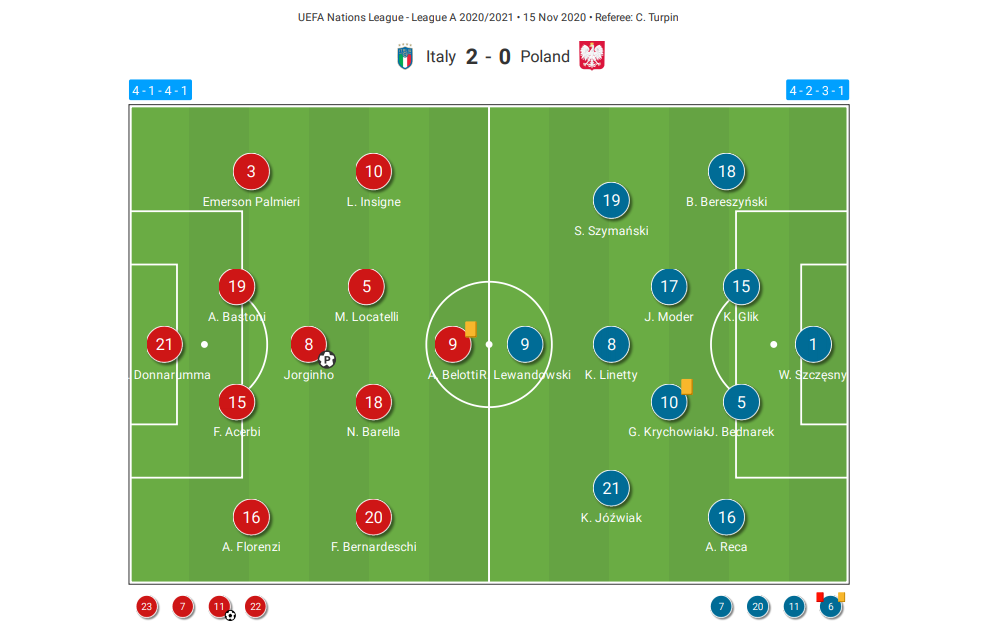 Italy didn’t win without reason. They had more possession (61% vs 39%) and created more chances (xG 1.73 vs 0.06) in this match. Thus, in this section, we’ll be dissecting Italy’s positional attack and see how Italy dominated in this game.

To begin with, Poland deployed a 4-2-3-1 mid-block to engage Italy. Poland’s block was narrow and they tried to create a strong side on the ball side. This means that there would be a lot of openings on the weak side. To exploit this, Italy utilised a 3-2-5 offensive shape, aiming to occupy the width along with the weak side space in front, creating 1 v 1 cutting-in scenario for the likes of Juventus’ player Bernardeschi. In addition, the front players didn’t stay at the shoulder of the defenders. Instead, they created spaces for themselves between lines (by two runs or simply occupied) and always ready to receive from the back/midfield.

Therefore, to break the narrow block of Poland, Italy first tried to overload Poland’s full-back by enticing the winger to step onto Italy’s defenders in the press. In this scenario, Italy’s side centre-back would hold onto the ball and instigate the winger to press and the wing-back on the same side would be freed ideally. A link player would be required to drop and link the play to the free wing-back. That would be Chelsea player Jorginho or Locatelli, as they are both good at linking the play with one-touch under the tight-marking of the opponent’s pivots.

Above is an example of this. The left centre-back Bastoni held onto the ball and enticed Poland’s right-winger to step and therefore, freed the former Roma player, left wing-back Emerson. The two pivots of Italy pinned two pivots of Poland. Then, former AC Milan player Locatelli dropped with pressure but still managed to link the play to Emerson. On this occasion, Poland’s right-back stepped and this triggered the supporting drop of Italy’s left-striker Insigne. A 2 v 1 scenario was created on Italy’s right flank and a one-touch combination between Insigne and Emerson successfully penetrated past Poland’s right-back. This eventually forced the Poland players to commit a foul in a dangerous area.

When one of the pivots succeeded in receiving the ball facing forwards, this was the trigger to switch the play to find decent dribbler Bernardeschi on the right flank. Then Bernardeschi could cut inside and tried to beat the left-back in a 1 v 1 scenario.

There would be some variations in this pattern of switching play, but in essence, the aim was the same. Above is an illustration of a variation in this pattern. Italy developed the play to the middle third, forcing the opponent to keep their narrow block on Italy’s left flank. Then on this occasion, Locatelli latched onto the ball facing forwards. Firstly he picked the teammate between lines, Internazionale player Barella. Barella brought down the ball with his first touch and his next touch was the pass towards Bernardeschi who was in the opening. Bernardeschi then cut inside and finished a shot, creating a threat for the opponent’s goal.

Apart from initiating the attack from the left, the attack starting on the right was also effective. The most common pattern would be the right centre-back Florenzi holding the ball in the midfield. This served as the trigger for the mobile runner Barella to run from deep and attack the space behind the defence on the half-space as his initial position was the midfielder. This kind of run was hard to track for the opposition’s midfielders and they would face the decisional dilemma of whether to drop or not. Also, Bernardeschi on the outside would drop to clear the half-space in a synchronised manner for Barella to run onto, providing a support passing option as well.

The optimal ball development would be to directly find Barella in behind the defensive line on the half-space. And as the ball was hit, Bernardeschi would move inside ready to receive the “set” ball from Barella. He would receive the ball and cut inside as a method to finish for Italy. On top of this, the ball could also be delivered to Belotti who dropped between lines. Belotti served as the link to the runner Barella in behind and flicked the ball to Barella, creating a direct opportunity for him to finish.

The image above showed us one of the patterns initiating from the right. Paris Saint-German player Florenzi wasn’t in the frame whereas he hit long to find the runner from deep, Barella. Barella was running towards space on the half-space when the width provider Bernardeschi moved inside. Barella back-heeled to Bernardeschi and the winger, who had 4 shots and only one on target in this match (not very effective), cut inside to make an attempt on goal. In total, he had 0.12 xG in this match.

While the Italian already dominated in the flank play, their attack through the centre was more threatening as the xG generated by the central play was higher (centre 1.09 vs flanks 0.64). The reason behind this was that the 3-2-5 offensive shape naturally has three in the centre and they were either between lines or occupied the space with dynamic occupation (Barella). Insigne was often the between-line receiver and was picked by the orchestrators with great forward passing skill, Jorginho or Locatelli. With his good open body orientation and turning skill, Insigne was able to attack the defensive line with his dribble and key pass/shot. He had 4 deep completions, the highest in the match.

Apart from performing at a high level offensively, Italy also did well defensively. They only allowed two shots from Poland (xG 0.06). The intention of their defensive play was to neutralize the threat from Bayern Munich striker Lewandowski. To achieve so, they tried to eliminate the connection between him and the other teammates and killed the play in Poland early stages in the attack.

Thus, Italy pressed high with a 4-3-3 block to control Poland’s 4-2-3-1 system of playing out. Poland might have one or two pivots (1-2 or 2-1 in the centre) but for most of the time, two pivots were deployed. Regardless of the number of pivots, Italy’s midfield-trio man-marked Poland’s pivots and number ten. This prevented them from playing through the centre and forced them to play outside. Then, as Poland’s centre-backs picked the full-backs, Italy’s winger in this phase would press on the flank and showed outside to allow a vertical passing lane.

Nevertheless, this was the trap that the Italians designed. Once the allowed pass was delivered to Poland’s winger from the full-back on the same side, Italy’s full-back would prevent the winger from turning. Meanwhile, Italy’s winger would drop to double-up and challenge the ball directly. The nearest midfielder would also get close to create a numeral advantage and put pressure on the ball if needed.

Above is the manifestation of their defensive trap. The ball was forced to Poland’s right-back as the central passing options were marked. The left-winger Insigne then pressed Poland’s right-back Bereszyński and showed outside, allowing a vertical passing route to the right-winger Szymański. Then Szymański was picked and this was the trap of the Italians. The left-back Emerson prevented Szymański from turning and Insigne tracked back to double-up and challenged the ball. The nearest midfielder Locatelli also clustered to the ball. Eventually, the ball was recovered by Insigne’s tackle.

Poland to break the press

While the Italians were successful in making trap and recovering, the Poles tried to figure out a way to break their press, and that would be by deploying two pivots while separating them in different vertical spaces. They would serve as a number eight and number six. The number six would hide just a bit higher than Italy’s strikers. When the ball was forced to the full-back and midfielder left his position to double/triple-up, the pivot might be freed and there would be an instant passing channel to find the number six. On this occasion, the number six would time his run into the channel and receive the ball facing forwards from a square pass. Then he could dictate the play.

As you can see from the above image, the ball was forced to the flank and three Italian players clustered to the ball. A passing channel emerged in this instance and that was the trigger for the number six pivot Krychowiak to run into the channel and receive the ball. The run-from-deep on the blindside was hard for Italy to defend against and Krychowiak succeeded in latching onto the ball in that space.

Italy dominated this match both offensively and defensively. The quality of Italian players determined the process of this match and we shall expect to see these Italians to scintillate in the future.