Group H played host to arguably the most interesting game in this round of UEFA Euro 2020 qualifiers with France taking on Turkey at the Stade de France. Both sides are locked at the top of the group with nothing to separate them. Turkey’s victory against Les Bleus earlier in the campaign meant the World Cup holders were out for revenge.

The atmosphere was vibrant and the stage was set, however, Turkey held on to earn themselves a 1-1 draw, seeing them avoid defeat and stay in contention for that golden top spot.

In this tactical analysis, we look at the tactics deployed by Didier Deschamps, which should have won France the game. We also provide an analysis of the tactical tweaks made by the visitors which frustrated the boys in blue.

The home side opted for a 4-2-3-1 system, using Blaise Matuidi and Corentin Tolisso as the double pivot in the base of midfield. No Paul Pogba, Hugo Lloris or Kylian Mbappé meant Deschamps had to reshuffle his squad. Moussa Sissoko occupied the wide right position, drifting infield to open the passing lane to the full-back Benjamin Pavard, who in typical fashion ventured forward at will. On the other side, Lucas Hernández started as the left-back, linking promisingly with Kingsley Coman who tantalised his full-back with clever movement into the half-spaces which we look at later. Wissam Ben Yedder got the nod upfront as the lone striker where he struggled to make an impact on the game.

Turkey started the game in a defensive 4-5-1/4-1-4-1 shape. Okay Yokuşlu started in the holding role, looking to reduce the spaces available to his direct opponent – Antoine Griezmann. Şenol Güneş, who has seen his side win eight of the previous nine, implemented a rigid system that saw Mahmut Tekdemir and Ozan Tufan in the centre of midfield, patrolling the spaces in a deeper block, restricting the spaces for France to play through. Burak Yılmaz was deployed as the lone striker, with Hakan Çalhanoğlu starting on the bench.

The hosts started on the front foot, dominating the ball (66%) and playing with a brisk tempo in their attempts to break through the Turkish defensive unit. Possession started from the back with France looking to build-up using short passes through every phase of the pitch. Turkey sat off and only began to pressure the ball once it entered their half, their PPDA was 21.53, which allowed France time to methodically construct their attacks. During their ball rotations, we can see above, the French full-backs were given license to move forward to support the attacks. The double-pivot dropped deeper to receive the ball from their centre-backs and then immediately looked to play wide, attempting to play around the Turkish block. Coman and Sissoko moved inwards off of their respective wings and into the half-spaces. This opened the passing lane for the double pivot to play the ball wide and progress attacks up the pitch. It also caused major disruption to the Turkish shape which we analyse below.

Griezmann stayed central for the most part, looking to connect with Ben Yedder, who we can see became isolated as a result of the reduced space in central areas. Griezmann drifted from ‘Zone 14’ when the attacks developed in the lateral spaces. This created overloads on the wings and provided France opportunities to penetrate. Unfortunately for Les Bleus, the final pass or shot lacked the usual quality, letting Turkey off the hook.

The visitors came with a gameplan, which was to frustrate their opponents. Their first priority was to create an organised defensive unit with a flat back four supported by three tightly positioned central midfielders. Above we can see how narrow the Turkish midfield became, which protected the more dangerous central areas of the field. Though their initial shape was solid, as the French side developed their attacks, moving the ball horizontally to disrupt Turkey’s shape, their system eventually broke down. Gaps started to appear as players were pulled from their rigid positioning into areas where space could be exploited. We can see above how Ofan (7) and Kenan Karaman (18) were pulled into areas which rendered their team shape vulnerable by isolating the right-back. We analyse this in further detail below.

From their low block, Turkey attempted to recover the ball in deep areas of the field, drawing the French team forward. On recovery they sought to transition quickly, catching France on the break by exploiting the space left behind their defence. In the first half, Turkey’s lack of a second striker meant this tactic was effectively useless as there was no support for Yılmaz, who was easily marshalled by the two French centre-backs. In the first half, the visitors didn’t create a shot from any of their counter-attacks. Once Çalhanoğlu entered the fray however, Turkey displayed more of a threat as they could build-off off Yılmaz with enough players in support to sustain meaningful attacks.

As mentioned, out of possession Turkey didn’t operate a full press. In fact, they sacrificed possession for defensive stability. In an attempt to disrupt the host’s build-up they systematically pressed in clusters when France’s ball rotations entered their half. This was effective in keeping France from developing attacks swiftly up the field, however, once the ball rotations were of a high enough tempo it began to expose the tactic’s weaknesses, particularly on the right side of Turkey’s defence – France’s left.

We can see as the ball moved into Turkey’s half, only then do players begin to press. In this instance, three players press the ball, forcing the player to pass backwards and start the attack from scratch. Notice how Turkey’s deeper midfielders don’t press in conjunction with the front three, as you would expect in a full press. Instead, they remain in their deeper shape, allowing France to keep the ball, but containing the attacks with some level of comfort as the ball is shifted backwards. This tactic eventually revealed its weaknesses as France’s technical players began to identify spaces the semi-press vacated.

Above, we can see France developing their attacks starting with the double pivot. Hernández on the left advances down the channel knowing he has defensive cover if possession is turned over. Turkey’s semi-press is activated as the ball nears the halfway line, which opens up a large space behind their midfield line.

Time and again Coman identified this space and moved into it unmarked. Turkey’s central midfielders ventured too far forward in quest of pushing France backwards. Instead, they allowed large spaces to appear in their midfield zone. Notice how Turkey’s right-winger is helplessly isolated in this 2v1 situation. He is currently marking Hernández and blocking the passing into the full-back, but, as a result, he cannot leave his post and step inside and to pressurise Coman.

This meant the Bayern winger had multiple opportunities on the left-hand side where he was gifted time and space to penetrate the Turkish defensive structure. We can see below that 18 attacks and 38% of their xG was created from the left-wing as a result of Turkey’s defensive frailties.

The away side were clearly stuck in two minds when it came to operating from an unfamiliar low block. By implementing an uncoordinated press, with their front players being more aggressive and not moving harmoniously with the defensive unit behind them, Turkey created problems for themselves. Against quality opposition like France, you’d expect to see tactical mismatches punished aptly. However, the World Champions faltered when it mattered and failed to take some decent chances they created.

The right-wing didn’t offer the same opportunities for the home side as they were handicapped by the inclusion of Sissoko as a wide man. His skill set of physical prowess and powerful running was incongruous on the wing and France would have certainly benefitted if they had used a natural winger on this side. One can only speculate, but the inclusion of Thomas Lemar or Nanitamo Ikoné from the start may have influenced the final result for Les Bleus who held the tactical advantage.

At the break, Güneş realised the deficiencies of his side’s shape and tweaked the system to a flat 4-4-2. He also brought on talisman Çalhanoğlu in an attempt to give his team more of an attacking threat in the second half.

We can see shortly after the break the visitors adjusted to a 4-4-2 system as they attempted to not only plug the obvious gaps occurring in the wide-spaces as mentioned above. But also to give more support to Yılmaz upfront, who cut an isolated figure in the first half. 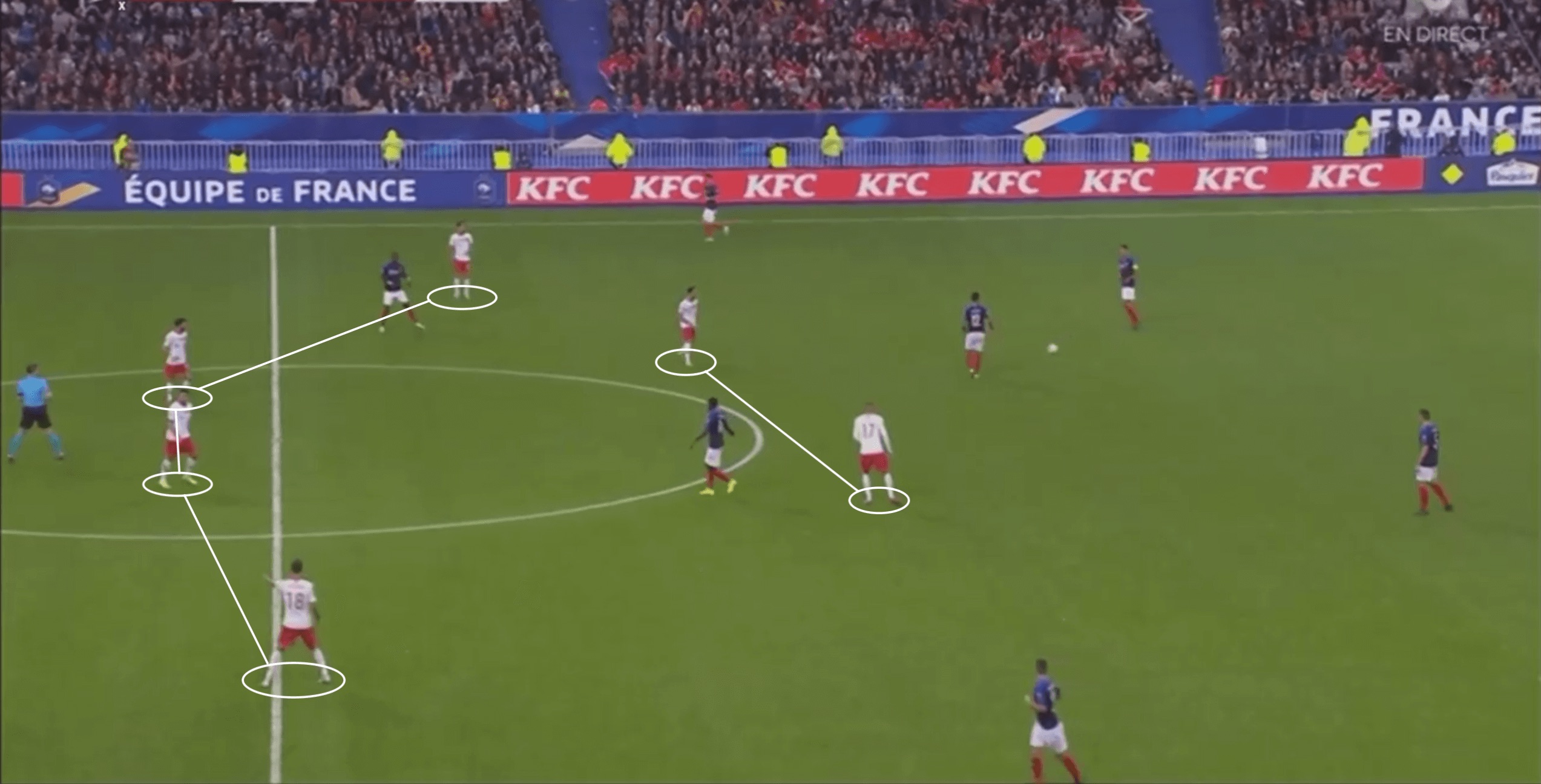 From both perspectives, the alterations worked. Turkey amassed nearly all of their 0.51 xG in the second half which included their late equaliser from a deft freekick met by the head of Kaan Ayhan. After which the visitors retreated back into their original shape as they looked to hold on to the point.

The 4-4-2 system with Ayhan at right-back allowed Turkey to prevent attacks from developing at ease down France’s left. As the ball entered the Turkish half, Ayhan moved out of the flat defensive line and pushed high onto Coman as he received the ball into feet. This assisted Karaman in front of him who wasn’t isolated in the same 2v1 situation that was occurred earlier in the game. Instead, he was able to stay wide and mark the advancing full-back as Turkey plugged the spaces. Notice too how the centre-midfielder is also moving across to create a defensive overload with a 3v2 situation.

Despite the tactical chess match that ensued throughout the game it was two set pieces that decided the result. One from Giroud who was again overlooked in the starting line-up and the second five minutes later to equalise, resulting in an entertaining 1-1 draw in the nation’s capital.

Turkey will be delighted to avoid defeat in a game where they were clearly second best. On reflection, their negative tactics caused themselves problems but they showed great spirit and determination to force an equaliser late on. Their terrific performances have earned them a strong points tally as they will look to continue their quest for top spot in Group H.

France will be disappointed with just a point in this match. They played a good passing game with quick, fluid interchanges but were unable to put the ball in the net. Notable absentees will no doubt strengthen the team on their return, however, with the game calling out for a second natural winger and a target man you can’t help but feel Deschamps missed a trick with a few of his starting selections. This oversight has prevented the World Champions from taking control of their qualifying group. With just two games to play, the French must be flawless from now on if they want to avoid any qualification dramas.