As the international break is underway, we are back to the Euro 2020 Qualifiers where Croatia welcomed Hungary. This was the game in which many expected Croatia to bounce back to the winning habit after dropping important points against Azerbaijan in the previous match where they drew. The home side gained a three-goal lead in the first half, ending the game early ad bagging an important win. Therefore, the clash was decided very quickly due to the one-team show that Croatia displayed last night.

Although Hungary did not show much and never really had the chance to come back to the game, the match still had some interesting points to discover. This tactical analysis will investigate how Croatia’s tactics achieved the soul-crushing victory against Hungary. 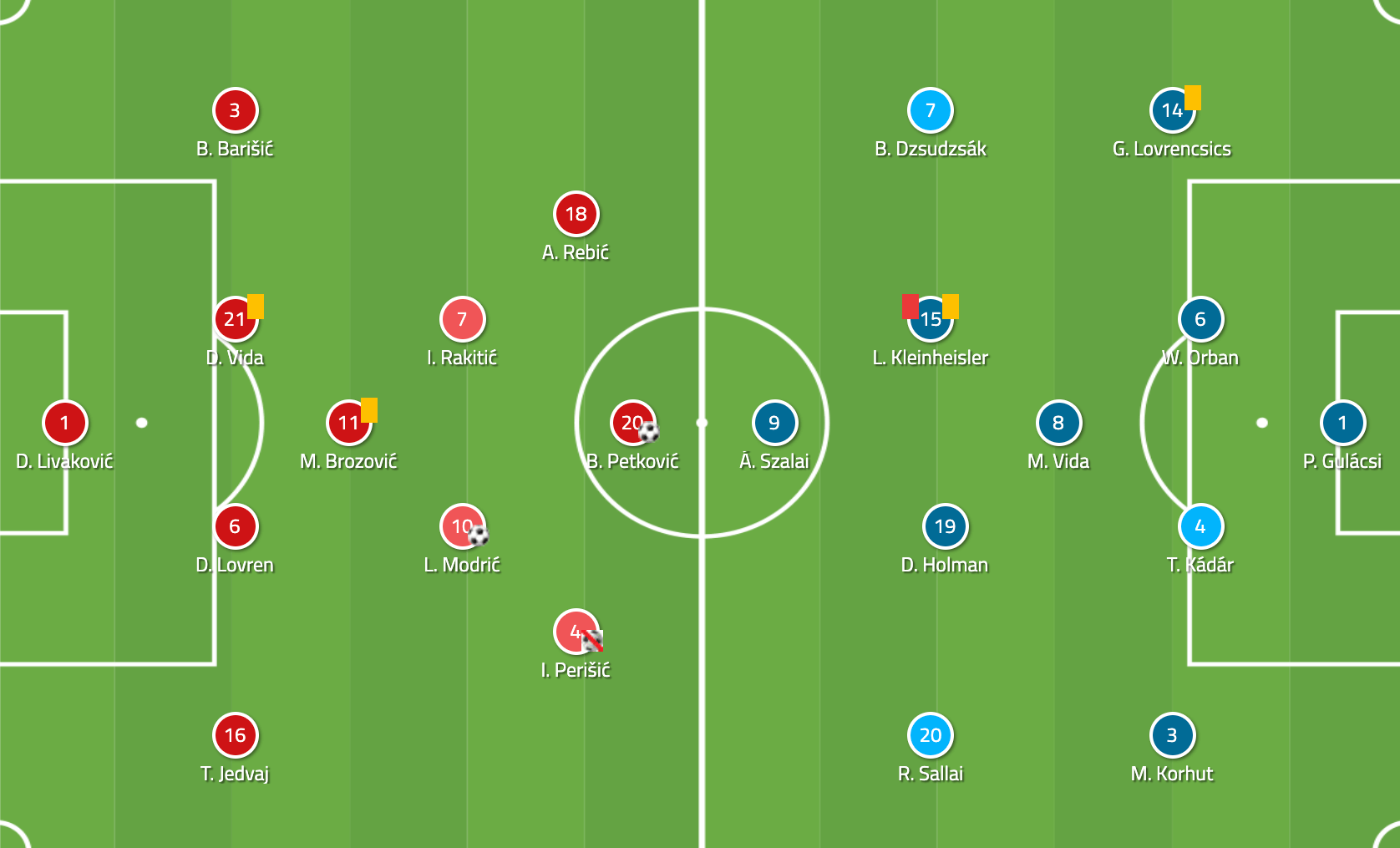 Croatia deployed their usual 4-3-3 formation where Borna Barišić and Tin Jedvaj had the task to provide the width and push up. Thus Domagoj Vida and Dejan Lovren were the central defenders who had to deal with the opposition striker. After the defensive department, there was Marcelo Brozović at the base of the midfield while Ivan Rakitić and Luka Modrić played as eights in the half-spaces. On the wings, Ante Rebić and Ivan Perišić occupied the wide areas to stretch the opposition last line and posed a threat to the full-backs. Bruno Petković was the lone striker.

Hungary chose to line up in a 4-1-4-1 shape. Although there were some important absences, coach Marco Rossi sent the best possible starting XI. Of course, RB Leipzig’s goalkeeper, Péter Gulácsi was in the goal. Ahead of him, Willi Orban and Tamás Kádár started. Gergő Lovrencsics and Mihály Korhut had a difficult job to contain the dangerous Croatian wingers. In the midfield three, Máté Vida was the defensive midfielder and László Kleinheisler and Dávid Holman were more advanced. Roland Sallai and Balázs Dzsudzsák were on the wings while Ádám Szalai was the lone striker. One of the main questions was how will Hungary prevent Croatia from taking advantage of their dangerous players.

Croatia threatening from the wing

One of the focus of this analysis is Croatia’s possession play. The home side was dominant on the ball as they recorded a 67% of possession in total. Of course, this was not a surprise considering how much quality the team has in their midfield.

Croatia’s intention was clear throughout the game – they showed their tactics in the opening minutes in the way they wanted to break down the opposition defence. In possession, Modrić and Rakitić had the freedom to push up to the opposition second line but often dropped to help play the ball forward. Since Hungary formed a medium block and rarely put pressure on the opposition centre-backs (mostly Szalai), Vida and Lovren had enough time on the ball. Also, the full-backs were able to push up by the sideline without risking too much.

One of the major tactical elements is that Croatia look to circulate the ball and progress up the pitch in the lateral zones by using rotations. You may see how this pattern was executed in the early minutes of the game. The movement started with Jedvaj dropping a bit to receive the ball which triggered Perišić to move outwards. Due to the heavy man-marking, this dragged the Hungarian left-back out of position, therefore, Modrić was able to immediately fill the vacated space.

Also, if we look at the instance above, we may recognise that both players from the away team got pulled out to the wing. Firstly, Sallai stepped out to close down Jedvaj on the ball, then Korhut pulled out too. It seems that the main theme in Croatia’s gameplay for this match was to exploit the opponent’s man-orientation. For example, here is another way to exploit the space behind the opposition full-back. Perišić dropped a bit once again which pulled the left-back deeper, then quickly turned back to fill the vacated space that Modrić’s ball targeted.

As I mentioned earlier, Hungary chose to form a medium block and tried to stop the home side’s attacks around the halfway line. Usually, out of possession, Hungary used a 4-1-4-1/4-5-1 structure which means only Szalai stayed up and looked to block the pass route to Brozović.

Notice in the image below how Hungary formed this mid-block. Rossi asked his team to try to remain compact which meant their lines were fairly narrow. Due to the Croatian midfielders, namely Rakitić and Modrić who were positioned high in the half-space, Hungary must keep a compact second line if they want to avoid being exploited by Rakitić or Modrić. Thus Holman and Kleinheisler tried to prevent passes towards these Croatian superstars.

Now, we can take a look at Hungary’s midfield pressing. In the occasion below, we can see how the Hungarian players aligned to press certain players. As I mentioned, Szalai was tasked to mark Brozović while both Kleinheisler and Holman moved out to press and close on Rakitić and Modrić. Sallai started to move outward to close on Jedvaj with an aim to be able to instantly put pressure on him once he receives the ball.

Hungary failed to keep the ball

On the other hand, when Hungary had the ball they could not keep it for long due to two reasons. Firstly, Hungary played long in goal kick situations which mostly ended up with instantly losing possession. This is clear if we look at the statistics: Hungary only won 25% of their aerial duels whilst Croatia won 56% and more importantly, compared to Hungary’s average rate of aerial duels, they won around 40%. Clearly it’s very low and far from enough to warrant the use of long balls in goal-kick situations.

Furthermore, they lost the ball quickly which is down to the fact that Croatia used intense pressing instantly when they were out of possession (and also due to the lots of mistakes in their passing). Croatia recorded a very good 6,77 PPDA value (pass per defensive action), therefore, it was a difficult circumstance for Hungary to play in.

In the instance below, we can see how Croatia pressed in a 4-1-4-1 shape where the striker focused on pressing the ball-carrier centre-back while the second line shifted to the ball side to limit the space and win the ball back quickly. Also, truth to be told, in this occasion, Kádár kept the ball too long and it made Croatia’s task to limit the space easier than it should have been. He should have passed the ball earlier rather than carrying it towards the wing and pass it to the left-back when there is no real chance to escape the pressure.

Hungary lacked the good mental state to resist the threat that Croatia posed. They did lots of errors that cost them a lot. With such opponents like Croatia, these kind of mistakes are not allowed and will be punished immediately, as it happened in this game.

On the other hand, Croatia played a great game and they collected three important points with ease. Although with this win, Croatia are now the top of Group E and the race is still ongoing. Slovakia are the second with 10 points, only three behind the Croats. Finally, Hungary is third with nine points and Wales fourth with seven.