For the first game of this week’s EFL Championship, it was a huge clash between West Bromwich Albion and Nottingham Forest, two teams that are fighting for the promotion to the Premier League. Slaven Bilić’s team was trying to increase the gap with Leeds United, if they managed to win this one, they enjoyed a maximum of nine-point margin. However, after 90 minutes, they merely obtained one point, it was a draw.

Sabri Lamouchi’s team just lost to Charlton in the midweek fixture, but they secured a tremendous 2-0 victory against Leeds last week, they were looking to provide a stern test to West Brom.

In this tactical analysis, we will show you how West Bromwich Albion drew Nottingham Forest. It is an analysis that focuses on tactics.

For this big game, Bilić started a strong team, which was the exact same eleven from the win against Reading in the midweek. It was a 4-1-4-1 formation, with Romaine Sawyers, Jake Livermore and Filip Krovinović forming the midfield trio. They had Callum Robinson and Matheus Pereira at flanks who produced the threat.

Forest played in a 4-2-3-1 formation. Adama Diakhaby was dropped to the bench and Sammy Ameobi returned to the lineup. Carl Jenkinson was on the bench and Matty Cash played as the right-back; Yuri Ribeiro was the left-back; Samba Sow partnered Ben Watson at the midfield.

Forest were a very defensive team, they were better off the ball. Therefore, they were pleased to let West Brom control possession. The tasks of Forest players were mainly defending with a midblock and playing counter-attacks.

For their midblock, they defended in a similar style as they did in the win against Leeds. A small change was the positionings of the wingers, as both Ameobi and Tiago Silva were defending higher, at the same line with Joe Lolley and Lewis Grabban. Therefore, the defensive shape was looked like a 4-2-4, as illustrated in the below image.

They had to keep Sawyer under control, prevent the sole pivot of West Brom from receiving the ball from the centre-backs. To fulfil this job, both Grabban and Lolley positioned themselves around Sawyer initially. For the wingers, they stayed high as this could reduce the distance with the full-backs. When the ball was moved to the full-backs, they could give instant pressure on the ball. 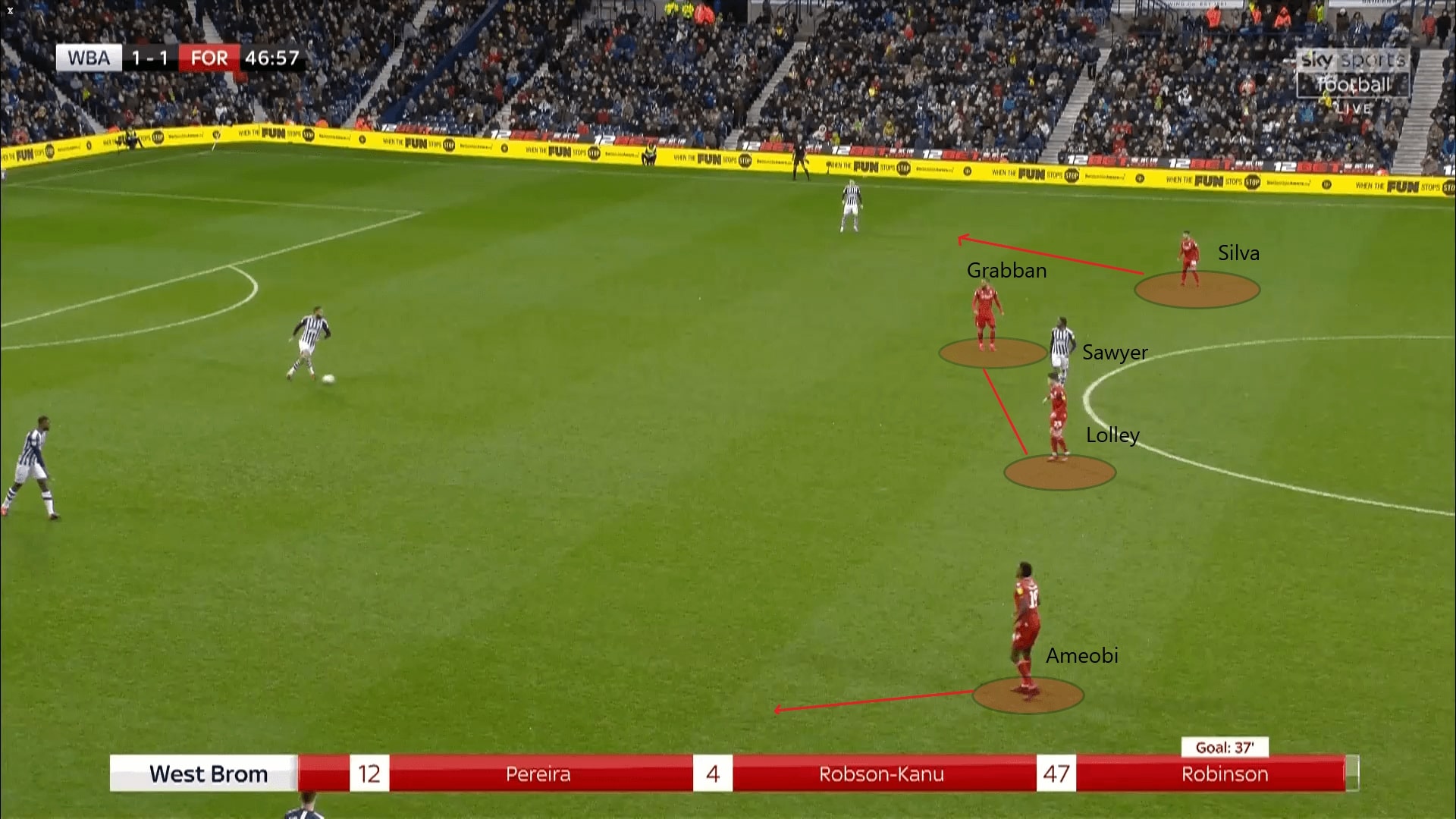 The defence of Forest could shift flexibly from a 4-2-4 into a 4-2-3-1 if Grabban was out of position. If this was the case, then Lolley’s marking on Sawyer would be vital to deny the penetration. The defensive shape was demonstrated in the below image, with Lolley covering Sawyer.

For the pivots of Forest (Watson & Sow), they should keep both advanced midfielders of West Brom under control. For Watson, he covered Krovinović in this case; Sow kept an eye on Livermore. The theme was the same: cut the central access of West Brom.

Given the right-winger (Silva) and Lolley were defending on the ball side, Kyle Bartley lacked short options to progress the ball, he had to go long.

Forest were confident to win the aerial duels, and they actually did better than usual in this game. Their aerial success rate of this game was 61%, higher than the average of 46% in the last five games. Their defenders were dominating in the air, Ribeiro won all five of his aerial duels (100%), while Tobias Figueiredo won three out of five (60%) and Sow won three out of four (75%). 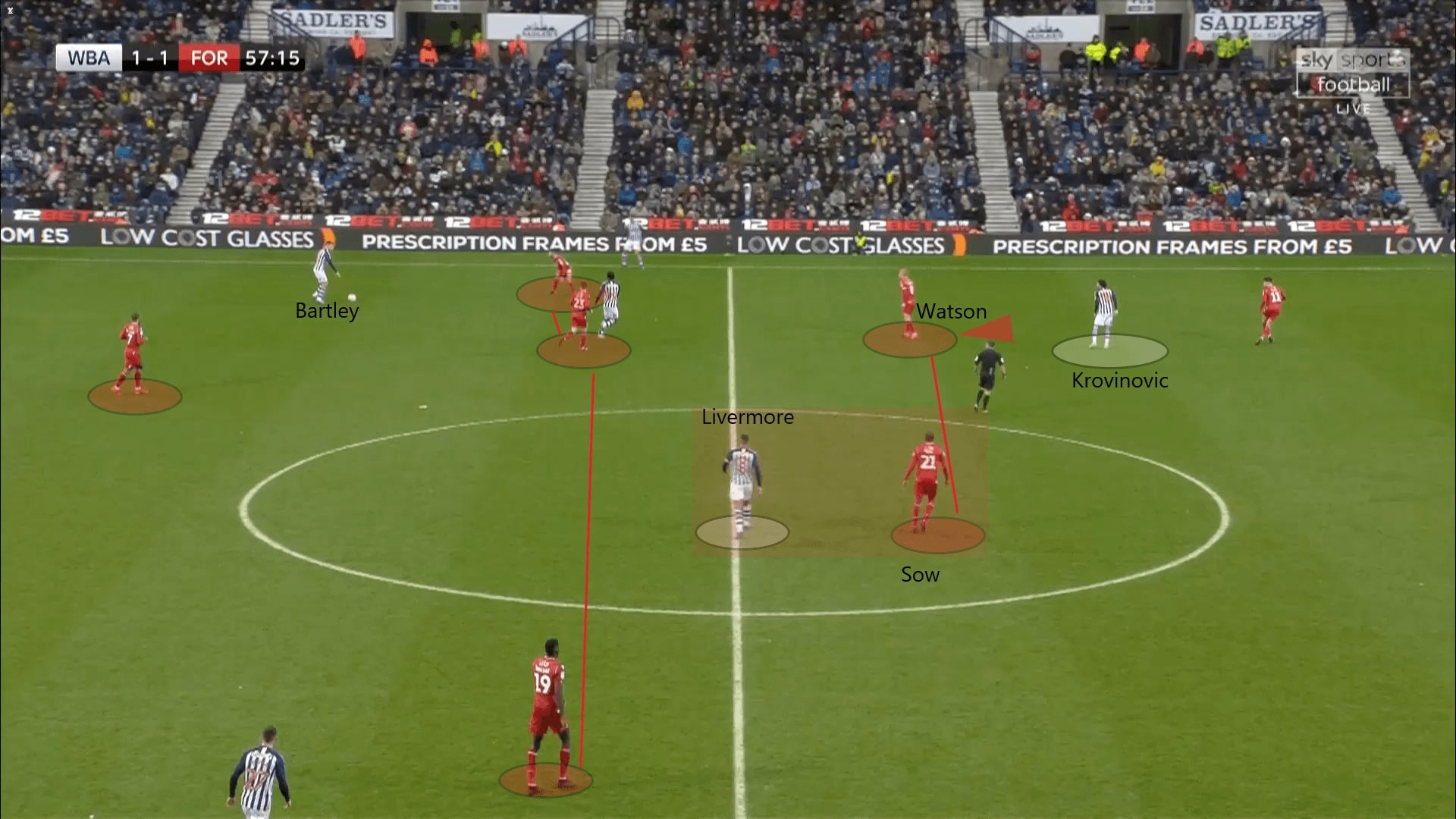 If West Brom managed to utilize the wingers to carry the ball forward and access zone 16 & 18, then, Forest formed a disciplinary low block to defend the crosses.

Lamouchi’s team had a pair of hardworking wingers who could track and defend in their own third. Therefore, he would let them defend the wide areas and keep the defenders compact in the box. The positionings of the double pivots were also important as they had the duty to protect the edge of the area.

So, as illustrated in the below image, Forest retreated their players to defend as Robinson had driven towards the left flank. It was the winger (Ameobi) to approach the 25-year-old Robinson; for Watson and Sow, they stayed in front of their own box to protect the areas where the defenders were unable to cover. Forest had the numerical advantage of six v three in their own box.

Only six of 22 West Brom crosses were completed in this game, and both goals of West Brom were not from the positional plays. For Ameobi, he contributed five interceptions and two clearances in this game. 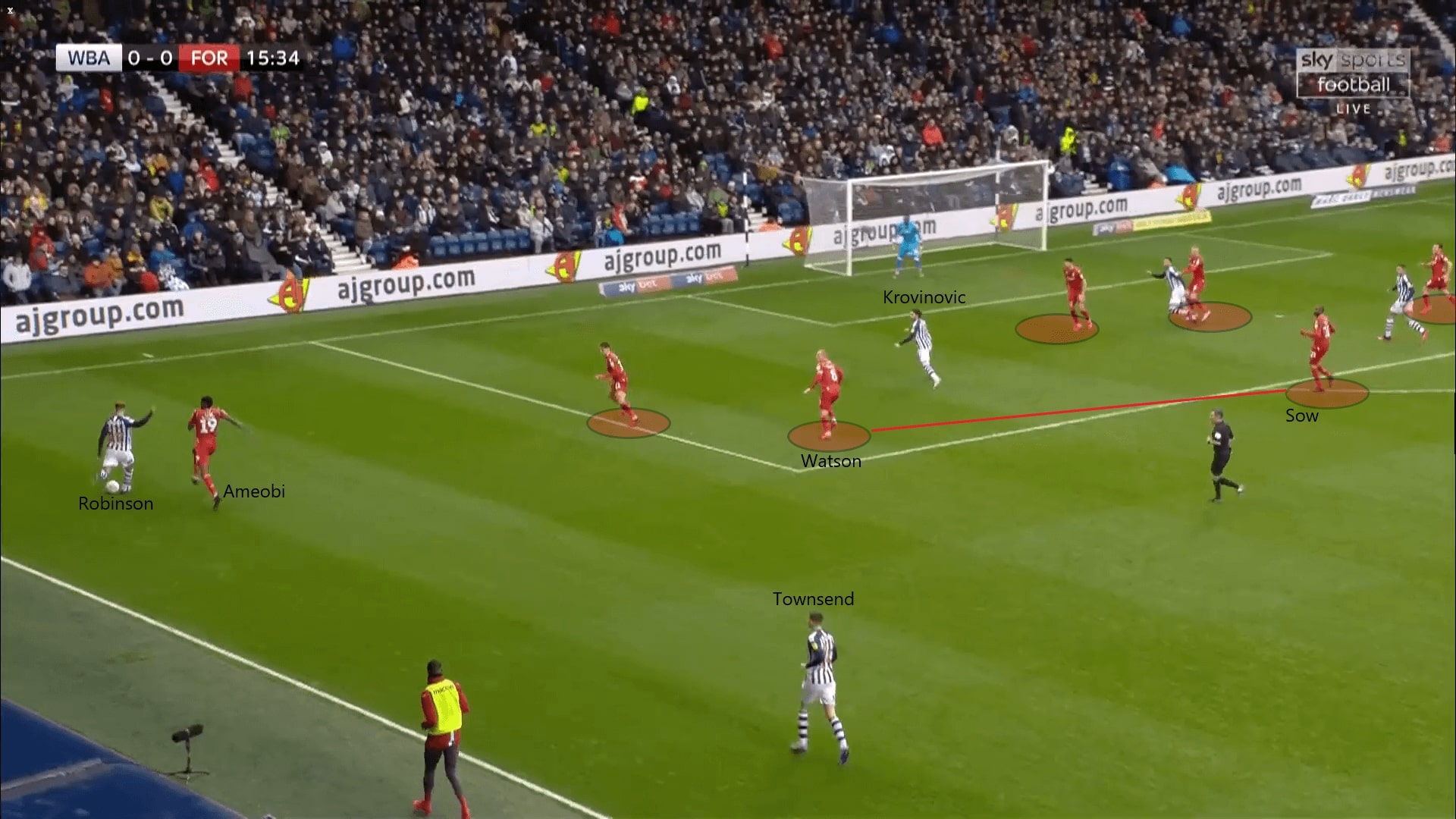 West Brom’s failed to play out from the back

To further explain, we looked into how West Brom failed to play out from the back because of the stubborn movements of the players in the first phase of the attack. First, we had some hints from the below passing map of the team.

As reflected, the linkage between the defenders was very strong, the four players at the back exchanged a lot of passes in this game. For the midfield trio, Sawyer was isolated, Livermore was very quiet too. A better player was Krovinović, who was involved in the game more when comparing to his partners.

For the build-up of West Brom, they stuck into their shape, kept the full-backs (Dara O’Shea & Conor Townsend) wide on the pitch. As explained, the main function of Forest’s midblock was to block the central passing lanes to deny penetrations, not pressing the defenders. Therefore, the Baggies back four were comfortable to exchange the passes at the back.

The shape was demonstrated in this image. Again, we saw Sawyers was man-marked by Lolley and unable to receive the ball. For the other two advanced midfielders, they were reluctant to drop and provide a short target to progress central penetrations. The back four of West Brom had a total of 184 passes, which was 44.67% of the team. The issue was they could not get the front players involved with these passes. 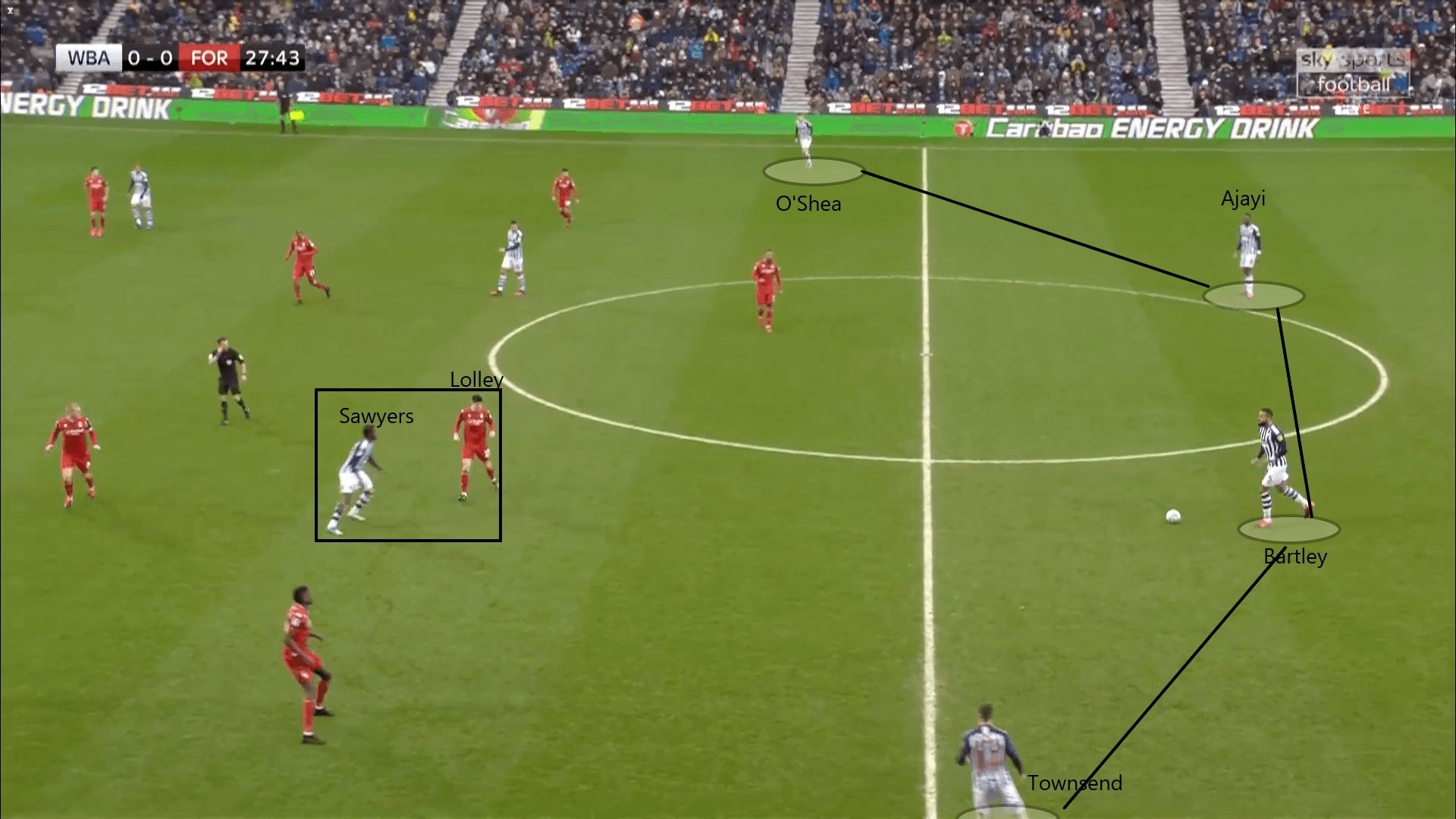 When West Brom wanted to go forward, they relied on the centre-backs to play long passes or diagonal passes to access the final third. However, the quality of these passes was not good enough for West Brom to start the attacks.

Below was the long passes map of West Brom’s right centre-back, Semi Ajayi. The Nigerian played a total of eight long balls, failed five. When we looked at the below map, only on one occasion the long-ranged pass bypassed the midfield, the other three all failed.

For another reference to reflect the inability of the centre-backs to play the vertical passes, we looked at the forward pass statistics of both players in this match. For Ajayi, he completed 61% of his forward passes only, while his partner, Bartley was even worse, merely completed 50% of them.

The left flank of West Brom

Despite their difficulties in the build-up phase, West Brom were still the better team in this match with a higher xG, 1.75. They should thank for the strong flanks for obtaining this figure. In this match, we want to particularly point out the left flank combinations of West Brom, as they had 23 attacks from this flanks, even more than the other side, 19. By contrast, given their penetration failure, they only had 15 attacks from the centre. All of these were reflected through the ‘attacks by flanks and danger level’ graph.

On the left, Krovinović, Robinson and Townsend were rotating their positions in this match, especially the two attacking players. They exchanged their positions so to get rid of their corresponding marker, especially for Krovinović. The Croatian escaped from Watson when he moved to the flank.

The exchanged positions of Robinson and Krovinović were reflected in the below image. For another outlet on the left flank, Townsend also provided some overlapping runs on the flanks if needed. Since both Robinson and Krovinović were a right-footed player, they tended to drift inside, which opened the space for Townsend occupy the flank. This increased the unpredictability of West Brom’s attack on the left flank.

On this flank, Robinson and Townsend provided a total of 11 crosses, that was half of the team total. 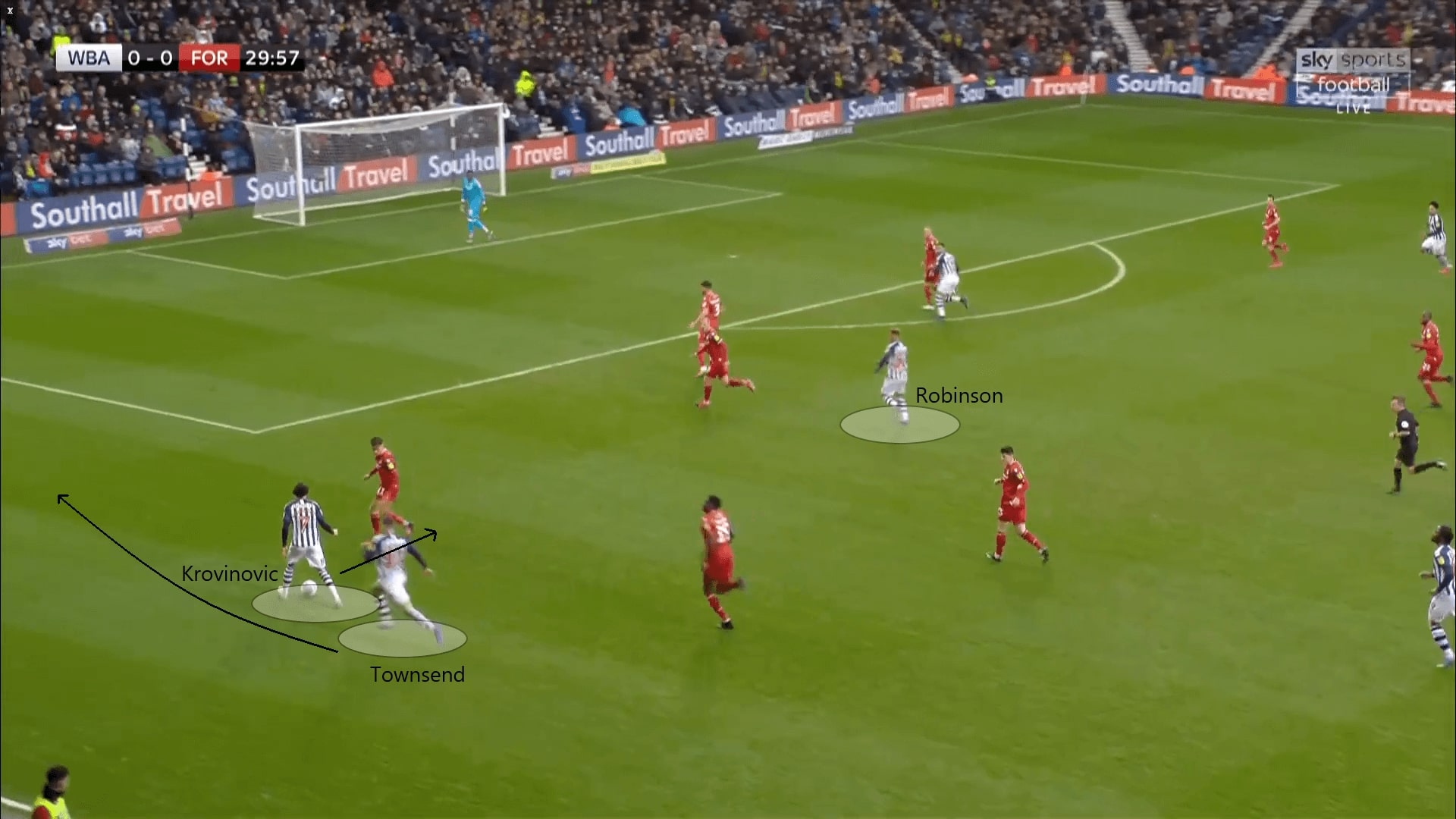 Apart from swapping their position, Robinson also utilized his pace to take on the wide players and shift in some crosses. It was more likely for West Brom to reach the final third soon after they recovered possession as the Forest players did not have time to regroup the shape.

The 25-year-old winger made an impact in this game. He had a total of nine dribbles in this game, completed seven of them, (78%). He was unafraid of carrying the ball to the byline and use his left foot to cross, as he possessed the pace to beat the defender. It increased the difficulty for the opponents to defend, because Robinson was not only cutting inside, he could also carry the ball forward. This was demonstrated by the arrows in the following image. 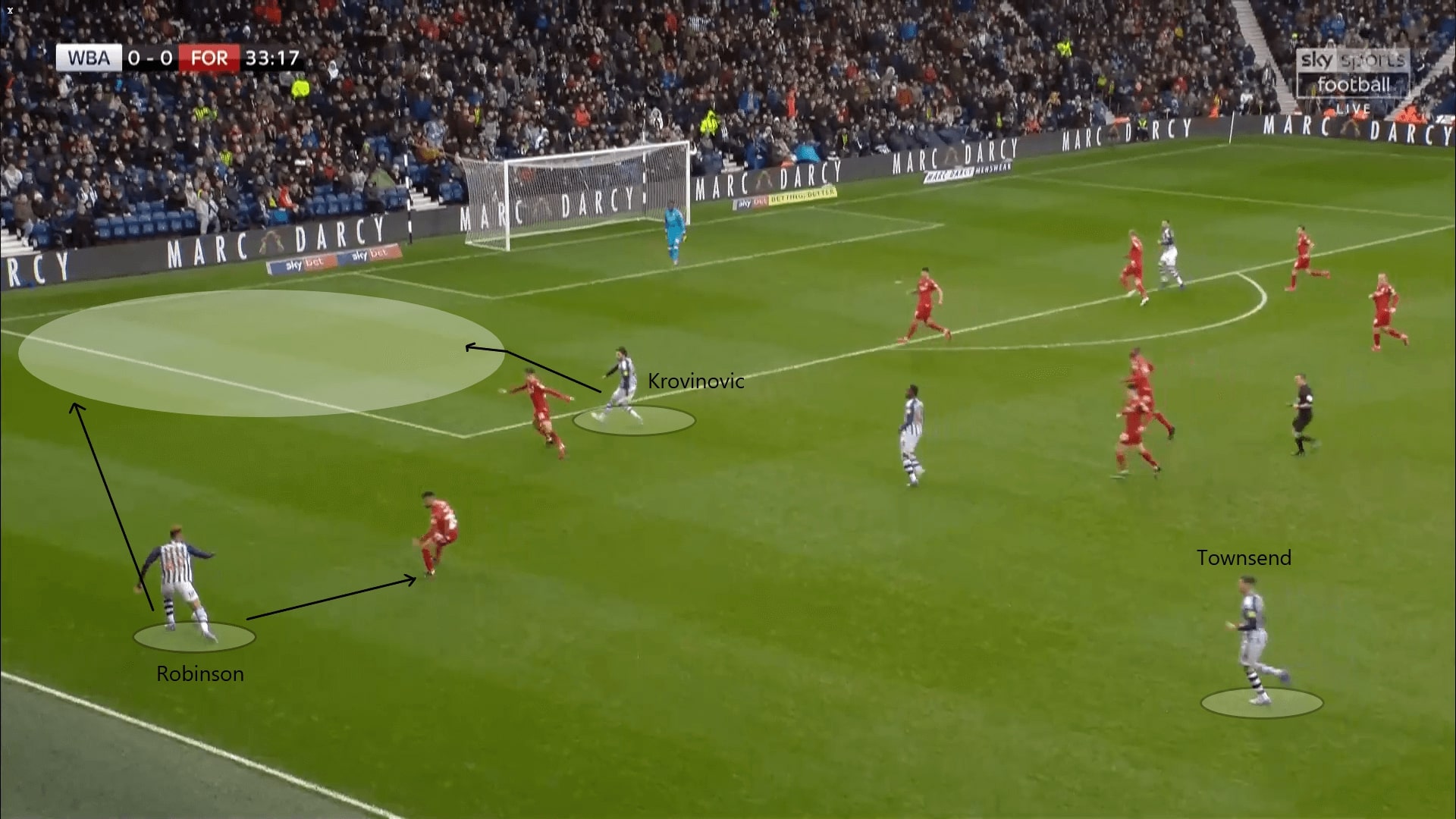 West Brom had 61% of possession and a PPDA of 6.7 in this game. Their defence started from the high press which forced Forest to play long. Initially, they covered the pivots of Forest, forced the ball to the wide centre-backs or a full-back. Then, the defending players moved to shut the ball side and Forest would play long to escape from the press.

As demonstrated in the following image, Hal Robson-Kanu came close to the right centre-back of Forest, Figueiredo. Meanwhile, Krovinović moved to that side while covering Watson; Robinson did his job to mark the right-back (Cash). Since Figueiredo did not have a short option, he went long.

At first, Lamouchi wanted Ameobi to play as the wide target man on the right flank again, but the former Newcastle man failed to use his physicality to dominate in the air, merely completed two of his six aerial duels in this game. 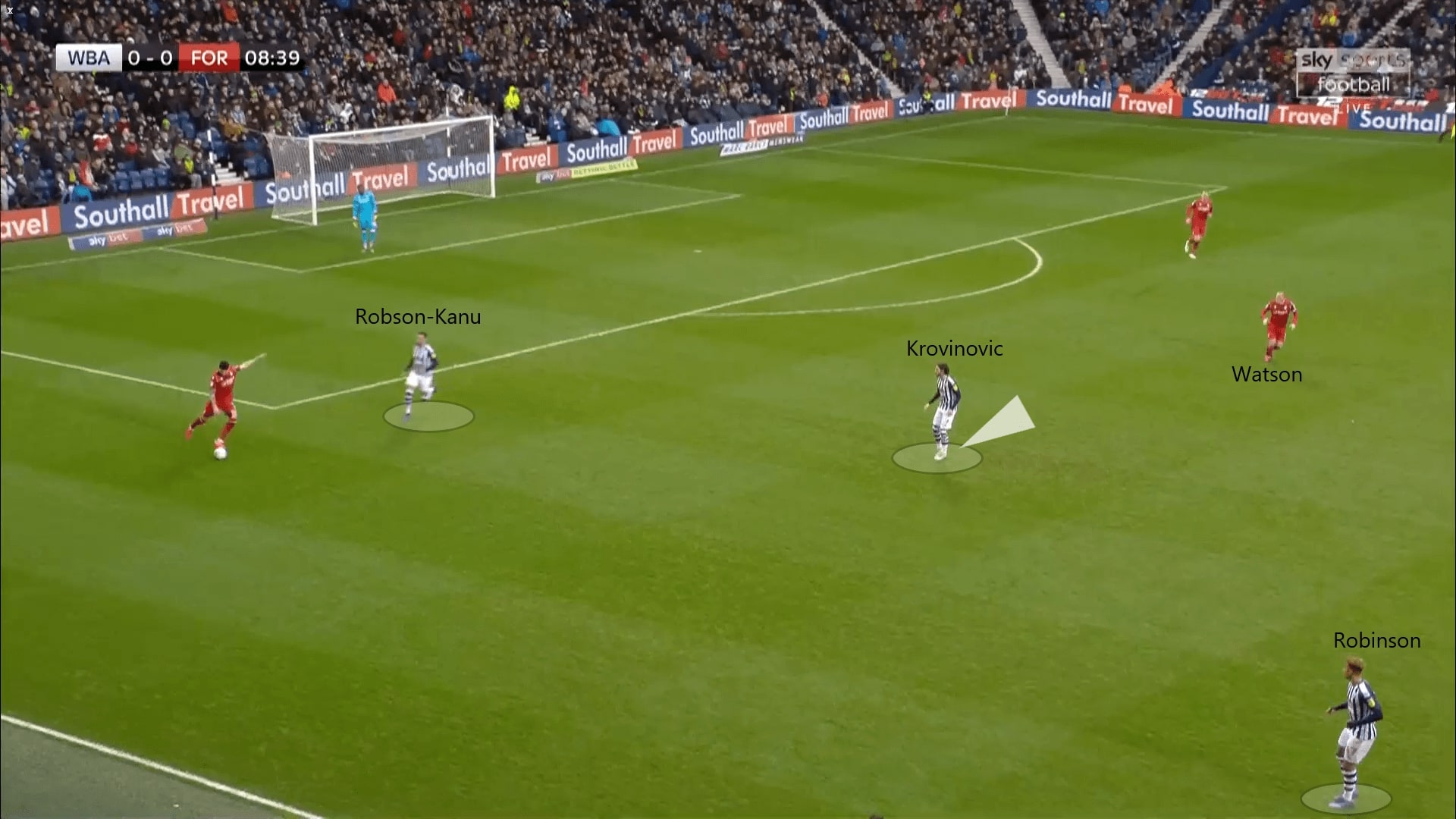 When Forest were a goal down, they pushed numbers forward to attack, which left the defensive line exposed. In the latter stages of the game, West Brom had many chances to hit Forest in the offensive transitions, they just could not seal the game.

In general, given the higher positioning of Krovinović when defending, he was a key player in the offensive transitions. During the quick breaks of West Brom, the Croatian liked to stay between the lines to provide himself as a short option, then, releasing the front players, usually, that was Robinson. His positioning was highlighted in the following image, staying between players could get loose from a marker.

In this case, Robson-Kanu dropped deep and took a centre-back with him, as he did in the whole game; Robinson quickly picked the spaces behind the defenders and made a forward run. It was a classic quick counter which West Brom tried to release the pacey player at the frontline. 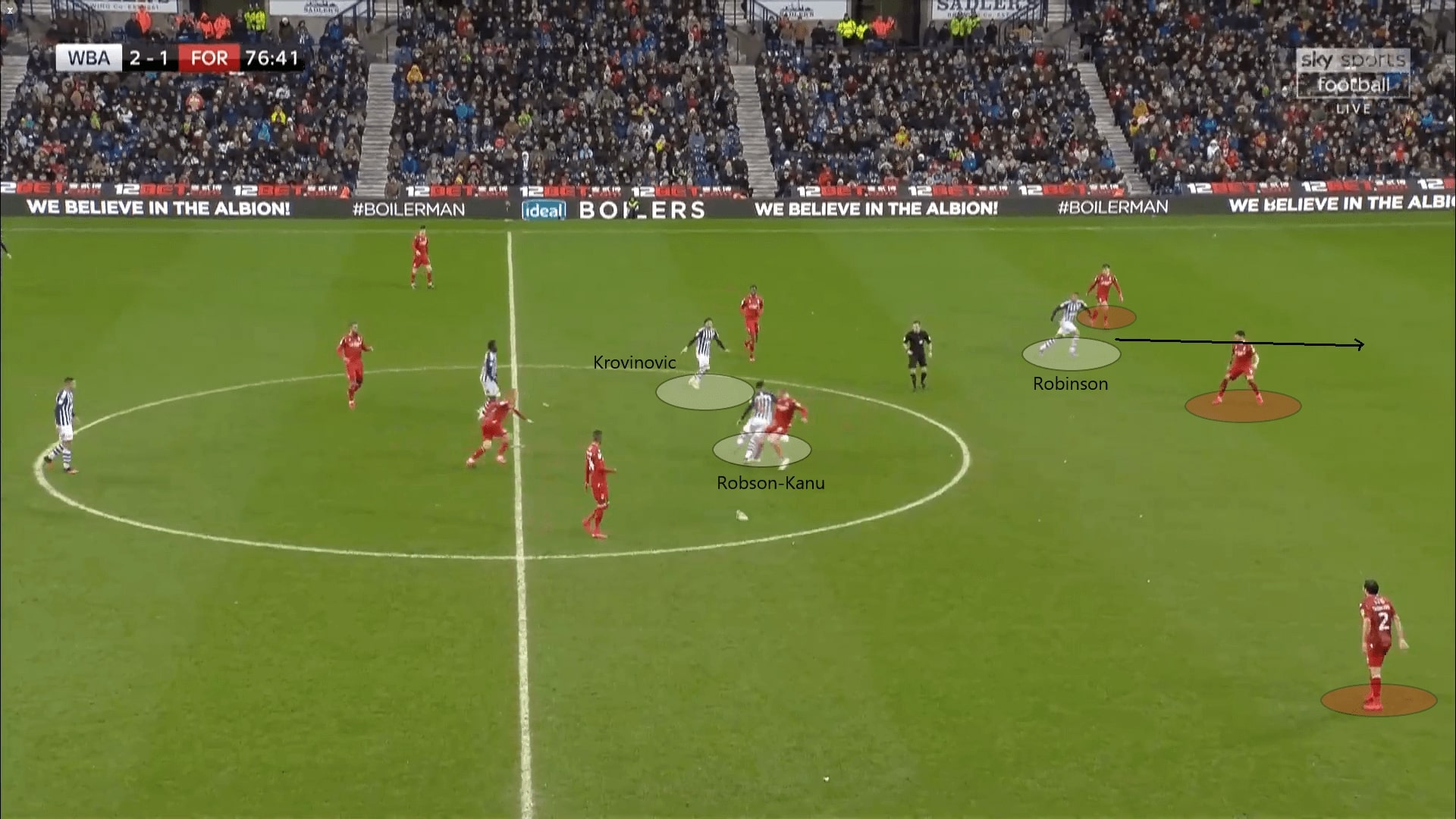 In general, West Brom were the better side of the game, they had a higher xG (1.47–0.43), they had more shots than the opponents (18–6). However, from a tactical point of view, they did not break the defence of Forest, which made them struggled a bit in this match.

For Forest, they were fortunate to obtain a point as both goals were special. First, Bartley gifted them an own goal; for the screamer from Cash, in fact, the xG was 0.05 only. They lacked a clear attacking plan when they kept the ball as they were a more counter-attacking team. This was not the best result, but it isn’t worse either.