The last match of this EFL Championship match week treated us to arguably the most enticing. Table-toppers West Bromwich Albion travelled north to visit a stuttering Preston North End.

Slaven Bilić arrived in the summer and has brought about a resurgence for the Baggies. Matheus Pereira, Grady Diangana and Romaine Sawyers are just some of the players that have been brought in and been starring in their rise to the top. Another summer signing, Charlie Austin eventually won them the points here.

Preston’s superb start has been faltering as of late. Two away games have been lost in a row, losing 4:0 at Hull City last time out, leaving them in sixth place ahead of today, just inside the play-off positions.

In this tactical analysis, we shall look at the tactics deployed by Preston and West Brom, and how the Baggies managed to snatch a vital win in the EFL Championship promotion race. 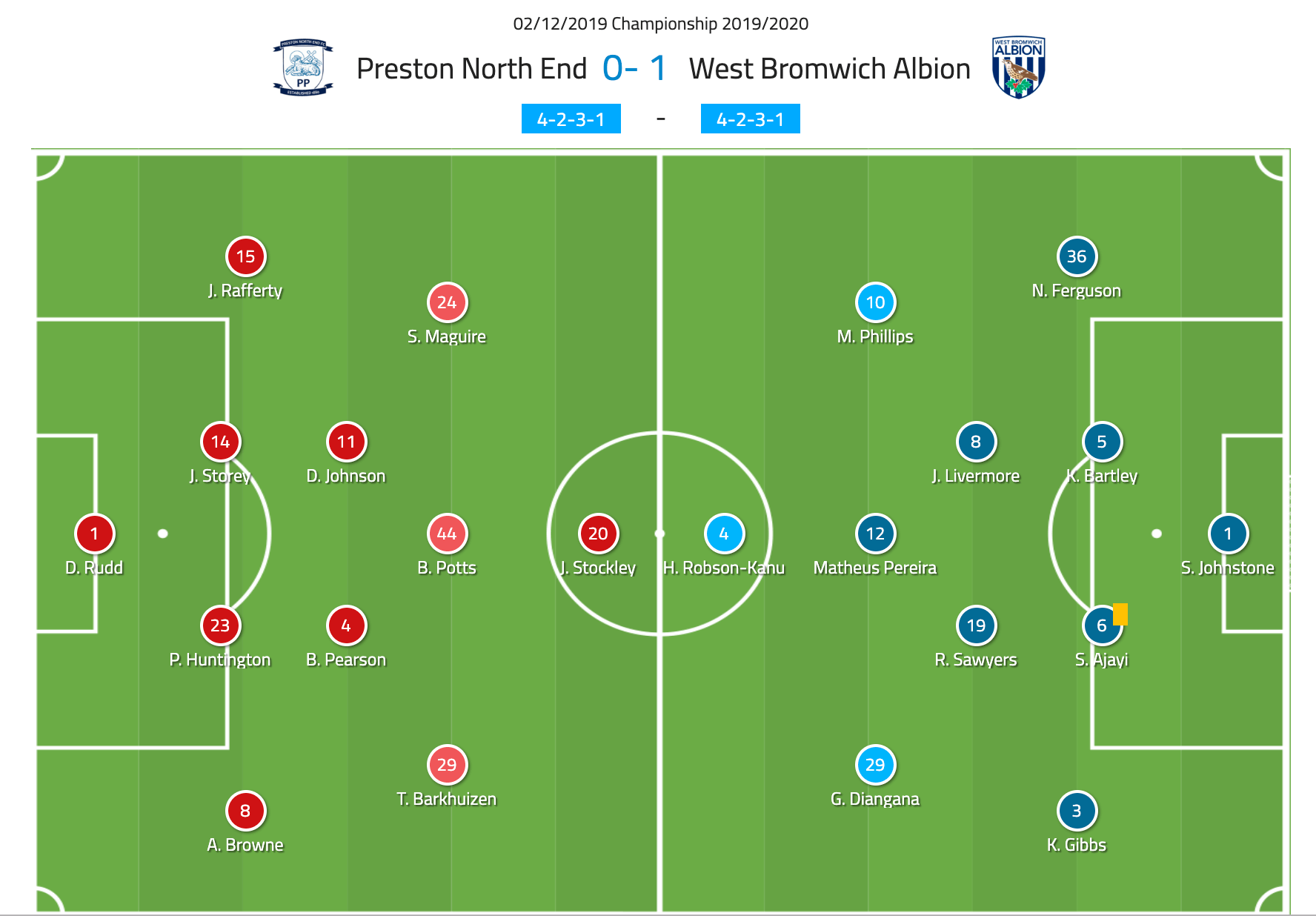 Alex Neil’s side was severely hit with injuries, which forced him to make a number of changes and play a makeshift defence, with many playing out-of-position. Alan Browne, usually a forward player, slotted in a right-back. Patrick Bauer had also been ruled out causing Paul Huntingdon to come in. Daniel Johnson dropped back into central-midfield, after playing in the 10 against Hull – Brad Potts went there today. Finally, Jayden Stockley went up-top, with Tom Barkhuizen now playing wide right.

It’s widely acknowledged that in this league you need to be averaging two points per game if you want to be aiming for promotion. West Brom’s current crop are matching and exceeding that recommendation, therefore it was no surprise to see Bilic keep the same 11 that has served him so well so far. Welshman Hal Robson-Kanu’s performances off the bench have seen him muscle out Austin and become the first-choice striker.

West Brom have scored the most goals in the league this season, 35 before this game. In consideration of this, Neil seemingly opted to try and cut off attacks at the source. To implement this, he chose to use a high press. The objective of such an intense strategy was to avoid becoming passive within the game context and hinder attempts from the table-toppers to cleanly progress the ball.

Setting up in a 4-2-3-1 allows a number of players to commit to the press, whilst still having a solid defensive base behind – protection in case their efforts are unsuccessful. Striker Stockley could effectively exclude a centre-back, or both, with intuitive positioning – ensuring his cover shadow was blocking the passing lane to the centre-back without the ball. The respective wingers would match up to their full-back and get tight, pressuring and hoping for a turnover.

Another interesting observation was the usage of typical attack-minded player Johnson. The four at the back, in addition to the two pivots immediately in front, represented a challenge for the Preston Press, there was many a time where the Baggies were able to play through, also helped by Pereira often dropping back. To combat this Johnson went on ahead to try and nullify the overall build-up, often going so far that he’d be supporting Stockley in the first line of pressure. This customarily left a 4-1-4-1 out of possession when actively pressing.

As you would expect this press was at its most intense during the early stages of the game. However, Neil didn’t get the success he’ll have desired, considering the expended energy. Johnson advancing tended to leave Ben Pearson – his midfield partner – exposed. Pearson was left to patrol much of the central third himself. This allowed West Brom to play penetrative, progressive passes forward without much immediate pressure to the receiver.

In attack, the Whites sought out big-man Stockley by going long for him to bring the wingers into play and then trying to counter quick. The ex-Exeter man competed for a colossal 30 aerial duels, but only won eight of them. His failures are also demonstrated in the aerial success of the two West Brom centre-backs. Between the two of them, they won 24 of the 29 contested. Kyle Bartley, in fact, won all 10 of his.

The ineffectualness of Stockley as a physical presence saw Preston struggle to assert extended periods of pressure. Chances that did arrive for the home side came when they could achieve such pressure and could pin the Baggies’ back-line – commonly winning the second ball from direct set-pieces and going from there.

Bilić’s side, utilising their excellent technical ability, prefer to construct attacking moves from the defence – keeping the ball on the ground and drawing out the opposition. The players heavily involved in the build-up have excellent composure and the ability to play in tight spaces under pressure.

The structure of their build-up was inherently linear when playing a 4-2-3-1. The two full-backs would stretch the Preston attack, opening up passing lanes into a roaming Sawyers or through the lines to one of the attacking three or Livermore.

Sawyers has a vital role in this team. The 28-year-old is responsible for dictating the play and tempo, ensuring ball circulation remains fluid and swift. You can see above how much of the play went through him. Here, he completed 60 passes, at an accuracy of 93% – both of which were a team-high. To put this in context, he made three times as many passes as Johnson, who made the most on the Preston team – demonstrating the differing approaches picked by the managers.

Attracting a press inevitably opens up space for the more attacking players to capitalise on. The three behind Robson-Kanu are arguably the best attacking trio in the league. All three possess pace and extremely good dribbling capabilities. Their qualities can be devastating if given the opportunity. West Brom have scored four in a game three times this season already.

Pereira is currently one of the stars of the season. Registering four goals and seven assists his importance to the attacking unit cannot be understated. The Brazilian’s superior technical quality in comparison to the rest of the league has seen him be given a free role by Bilic. Pereira’s intelligence allows him to provide the defence with a passing option when pressed, and he also drifts wide, usually combining with the winger and full-back, to draw players and then releasing, exploiting any newfound space – like below. 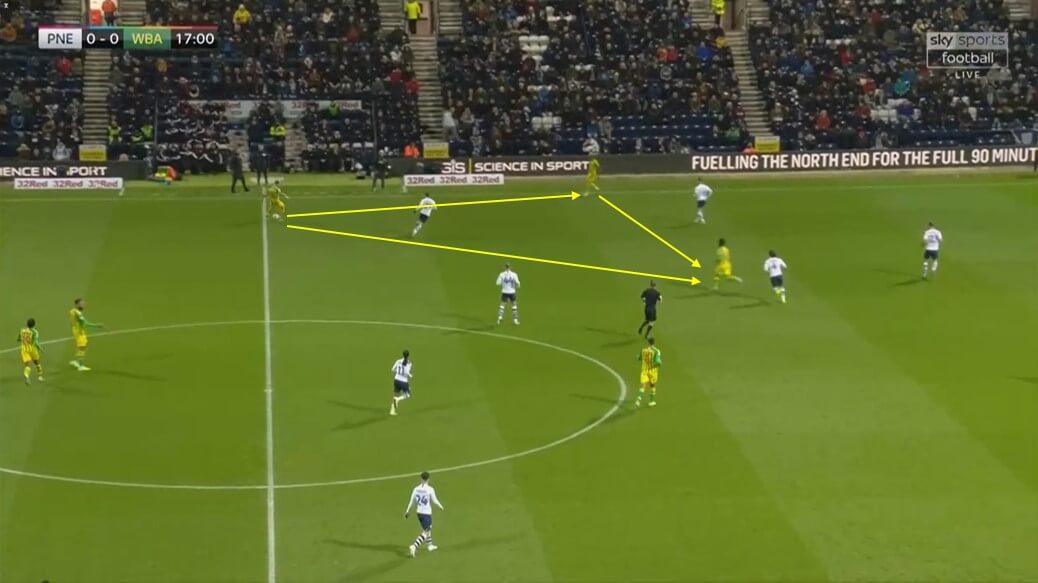 Both standing at 6” 3’ beating away aerial bombardments from out wide is no problem for Bartley and his partner Semi Ajayi. Centrally, Sawyers and Jake Livermore acted as a shield, shutting down attacks that came down the middle. Any Preston chances came from overplaying in the build-up phase or a bit of individual quality. After coping with a spell of pressure around the hour mark the introduction of Kyle Edwards and Charlie Austin pushed the Lancashire side back. Edwards coming on was of particular significance, he won the penalty – albeit dubiously, and Austin duly dispatched.

Edwards is right-footed, Diangana is left-footed. After the Edwards substitution, Bilic chose to then place them on opposite sides to their strong foot, playing effectively as inside forwards cutting in, towards the middle third where only Pearson was marshalling. This was an effort to overload him. In addition to this, the full-backs were given more license to push on. Both of these changes helped to pin Preston back and shift the momentum of the game back to Bilic’s side.

In this analysis, we saw a game that seemed destined to end in a mediocre 0:0, a lucky break and a controversial penalty decision gave West Brom a boost in their quest to get to the promised land. In truth, West Brom probably got what their dominance and technical superiority deserved.

Preston have now had three defeats in a row and will be looking to turn that around urgently and get back on track, starting with a trip to West London against QPR.