The highly anticipated round of 16 of the UEFA Champions League kicks off tomorrow with Liverpool taking on Atlético Madrid at the Wanda Metropolitano Stadium and Paris Saint-Germain taking on Borussia Dortmund at the Westfalenstadion. The expectation is that Atlético Madrid vs Liverpool might be a cagey affair, and fans will be hoping that Dortmund vs PSG will be anything but, despite the fact that the last time the two sides met in the Europa League, the final result was a goalless draw. That was back in 2010 though, and a lot can change in a decade. Both teams have evolved into two powerhouse teams with star players, but still have had little success in this competition, with Dortmund only winning the competition once back in 1997, and PSG having never won the prestigious European honour. This tactical analysis will look at where the first leg of this matchup could be won or lost.

The home side will likely set up in a 3-4-3, a formation that Swiss manager Lucien Favre has recently employed his team. It may be a risk to have his side set up in a relatively new formation against the French champions, this new formation has brought them fantastic results with four out five wins in the league since the winter break. The one loss in the league came from when Favre resorted back to a back four.

Favre has a full squad to work with barring three players: Thomas Delaney, Marco Reus, and Julian Brandt who are out due to injuries. Favre’s expected lineup is somewhat easy to predict, especially if he goes with the 3-4-3 formation. The only question mark comes from which centrebacks start alongside Hummels. While Łukasz Piszczek does have the experience, which will be needed for a match as important as this one, the pace of Paris Saint-Germain’s frontline may be too much for a 34-year-old. This reason alone may be enough for Favre to trust Dan-Axel Zagadou and Manuel Akanji over the Polish centre-back.

The away team’s set up is a bit more difficult to predict solely because German coach Thomas Tuchel has been much more fluid in how he has set up this season, constantly experimenting with different formations. Tuchel does have a couple of injuries to his squad with Presnel Kimpembe, Abdou Diallo, and Colin Dagba not fit enough to play. Neymar may also not be fully fit, but it is likely that he will play because of the importance of the match.

Tuchel may set his team up in a 4-4-2, which features all four of PSG’s stars in attack: Neymar, Kylian Mbappe, Mauro Icardi, and Ángel Di María. All four players have shone this season, especially when they play together. However, it leaves PSG specifically fragile defensively.

To create a more stable, and balanced team, Tuchel may opt for a 4-3-3, leaving out one of his attackers (likely Icardi), and opt for the extra body in midfield to help the backline in defensive transitions.

PSG have one of the best, if not the best attack in Europe at the moment, with only Liverpool, Barcelona, and Manchester City really rivalling them for that title. Between the four of them, Neymar, Mbappe, Icardi, and Di María have 60 goals this season, in both the league, and the Champions League, and that does not include the contributions of Edinson Cavani.

So what makes the attack so good, regardless of who is playing? Tuchel has a number of different setups that exploit the opposition’s defence. Each player has a specific task, and when done together at the right timing, PSG start to create chances very easily.

The first set up that we often see with PSG, is that they will start with their narrow players tucked in, the 4-4-2 often looking like a 4-2-2-2. This, in turn, results in the opposition’s defence, usually a back four, also becoming compact.

When PSG have possession of the ball in the middle, one of the wide players will quickly dart to the flanks, that do not have any defenders occupying them. This leaves them with ample space, and time to either take the shot or cross into the box for one of the strikers.

The opposition’s defence will often be scrambling to try and stretch themselves back again, leaving gaps that PSG can exploit from there.

Another set up specifically relies on the fact that PSG play with two strikers, rather than the one. A long ball over the top is much more difficult for a backline to defend against when there are two players running at it rather than one. Furthermore, the two wingers will often join in to attempt to win the second ball after a long ball, often making it a 4vs4 situation.

The third set-up is similar to the first, as it exploits the wide areas of the opposition, but the buildup requires a bit more patience. PSG will often attempt to overload one side, and then quickly switch to the other, in hopes of again catching their opponents off guard.

PSG have multiple ways in which they are able to take advantage of a team’s defensive line. A part of that is having the attacking players that they do, as each excel at different aspects. Having players like Mbappe makes it ideal for counter-attacks, with his space. Both Neymar and Di María are excellent chance creators as well as goal scorers, and having the physical presence, and intelligent movement of Cavani and Icardi up front, PSG are set in the attacking department. Dortmund will have to have one of their best defensive performances of the season in order to nullify the threats of PSG’s attack.

If PSG’s attacking force is known as world-class, Dortmund’s would be known as the next generation. A very young front three of Jadon Sancho, Thorgan Hazard, and Erling Håland will likely start against PSG. Dortmund’s attacking play also involves the fullbacks heavily, as they play with a back three. This allows Sancho and Hazard to not worry about maintaining width, and instead operate within the half-spaces. Their set-up will likely look like this in attack. 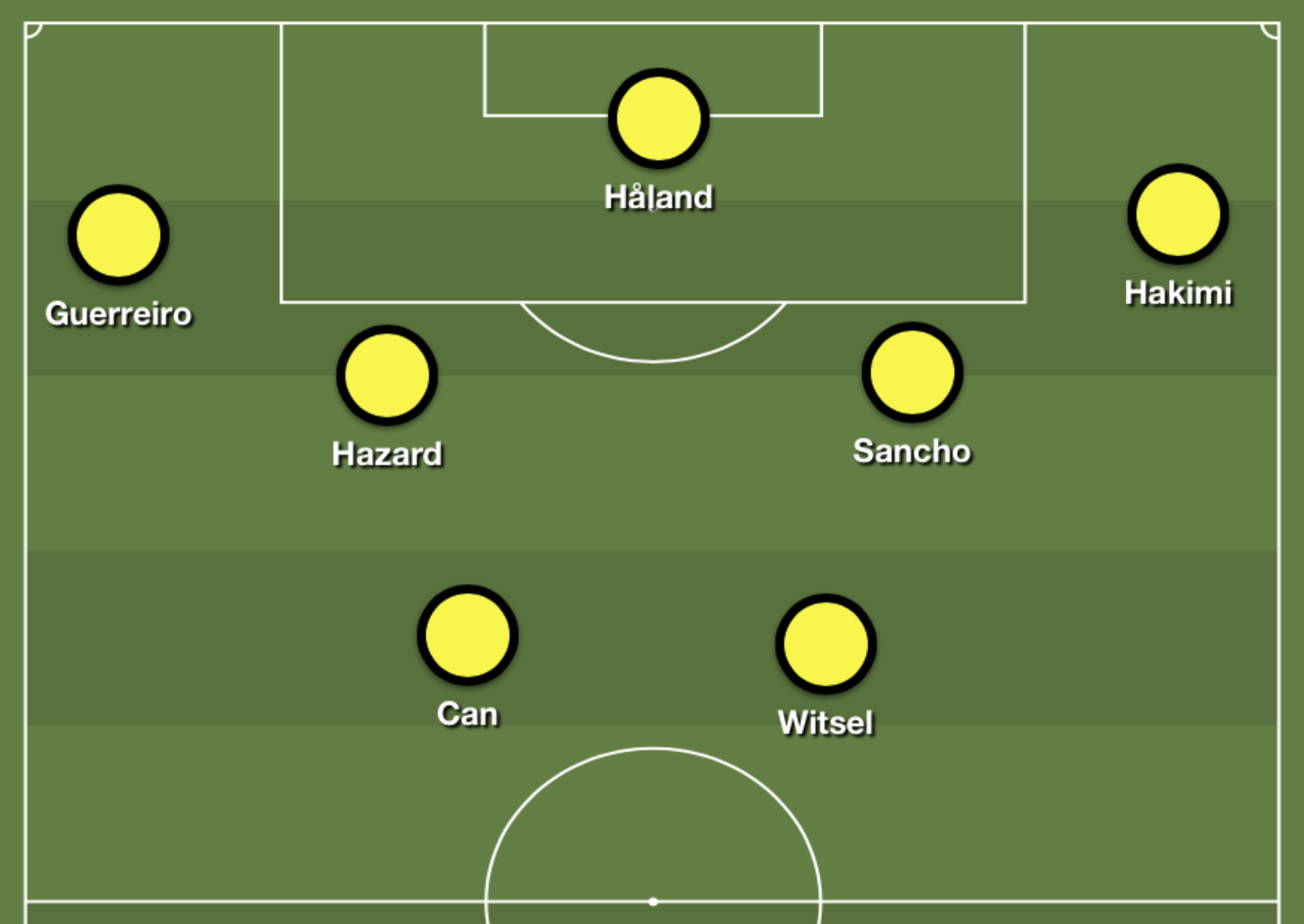 Usually what will occur is the opposition’s fullbacks will be isolated because of the pressure from Dortmund’s fullback’s. This allows longballs from Dortmund’s centrebacks to easily find one of the front three, with either Sancho and Hazard operating in between PSG’s defence and midfield lines, or Håland dropping in a bit deeper to receive the pass. Once that occurs, it becomes extremely difficult for the opposition to recover, and Dortmund are able to easily create goal-scoring opportunities.

One of the reasons that this matchup will be so interesting to watch, is because as well as both teams having similar strengths in attack, they both struggle in defence. The ideal formation of both managers is a midfield two, and this has left both teams quite fragile, especially when it comes to transitioning from attack to defence when they lose possession.

For Dortmund, it is a matter of not having a pure defensive midfielder in the middle. Both Witsel and Can are considered to be central midfielders, and while they do of course perform defensive duties, they will often leave the central defenders exposed. It does not help that both fullbacks often combine with the front players, and join the attack.

When Dortmund are pressed, they crumble easily, which can often lead to dangerous situations when they have possession in their own half. In an attempt to play out from the back, the opposition can press them into making sloppy passes by blocking passing lanes.

PSG will likely press Dortmund. They often incorporate pressing patterns into their game, and playing away, they will want to not make the mistake of playing timid and allowing Dortmund to run riot. Dortmund’s backline and midfield have to try and remain press resistant in these moments, so that PSG do not take advantages of their mistakes.

On the other hand, PSG do have strong defensive midfielders, but the lack of tracking back from their forward players can and will hurt them. It is understandable that forward, attacking players want to remain close to goal, and not perform defensive duties, but in doing so, it allows the chance for Dortmund to send wave after wave of attack without fail. Tuchel’s forward players will have to be disciplined in Dortmund or it will cost them.

The tactics of the two teams mentioned in this analysis show that despite both teams having had relatively little success in this competition in previous years, they will be looking to change that this year.

Borussia Dortmund have a very talented squad that has a combination of experience and youth. Playing at home first could be an advantage for them, as gaining an advantage at home will make the trip to Paris less daunting. Last season, their Champions league run came to a disappointing end in the Round of 16, after failing to score a single goal against Tottenham Hotspur in both legs. Their league season last year was also disappointing, solely because of the strong lead they had in the Bundesliga that they ended up losing to Bayern Munich. They are a much different team than last year though, and they’ll be hoping to rectify last season’s mistakes.

Paris Saint-Germain have failed to get past the Round of 16 for the past three seasons, suffering elimination from Manchester United, Real Madrid, and Barcelona respectively. Not only have they been eliminated way too early for a team of their calibre, but it was the manner in which they were eliminated, having had supposedly strong leads on the ties going into the second leg in two out of three of those seasons. This cannot happen again this year. Ligue 1 is more or less wrapped up, and it truly is the Champions League that the club and the fans yearn for. PSG’s biggest enemy is themselves; they cannot let their past disappointments haunt them in Dortmund, and more importantly, they cannot let the pressure get to them at the Parc des Princes, regardless of the result of the first leg.