Barcelona hosted Getafe at the Camp Nou last weekend. Barcelona are in a transition period tactically under Quique Setien who has taken over since January. They contest for the top spot in the La Liga table standing just below Real Madrid. Getafe have had a strong run this season standing in third place, which made this fixture nothing short of interesting and challenging for both teams.

Barcelona have seen a shift in tactics under Setien opting for a much more possession-based game than what they played under Valverde. This shift has come at a cost of mistakes that has seen them struggle at times. Setien’s high risk, high reward style of play is something the young players and the veterans are still adapting to. Barcelona managed to win 2-1 over Getafe, and although their performance was impressive, the scoreline was very close and the match could have swung either way. In this tactical analysis, we will see how both teams played each other out.

Barcelona opted to play in their regular 4-3-3 formation which has worked out well in the last few games. The 4-3-3 involved plenty of positional rotations and favoured a high-possession style of play.

Getafe looked to defend in a 4-4-2 with intense pressing to close the spaces in the middle third. They also pushed the defensive line quite high closing the spaces for Barcelona to play their short passes.

Getafe anticipated quality players like Griezmann and Messi to cause problems for their defenders if they ended up isolated in 1v1 or 2v1 situations. Hence it was pivotal to push a high defensive line forcing the Barcelona forwards to constantly be on the move in the direction towards their own goal.

In the 4-4-2 system, the back line of four stayed compact and made sure Griezmann, Messi or Fati had very less time and space on the ball by pressing intensely. In front of the back four, we saw the midfield line of Etebo, Arambarri, Maksimović and Cucurella. The wide midfielders stayed more central and often collapsed onto the defensive line making it a line of five. One of the two central midfielders, usually Maksimović would press the deep pivot, either Busquets or de Jong forcing the pass backwards.

The forwards, Jaime Mata and Jorge Molina worked very efficiently in applying pressure upon Pique and Umtiti, forcing the play back to Ter Stegen. The team shape in this pressing structure often looked like a 4-3-1-2 staying compact centrally and shifting across the field when there was a diagonal ball to switch play. Under Setien, Barcelona often looked to play the penetrating passes through the middle, and so this pressing strategy worked quite effectively with 42 interceptions (Barcelona had 32 interceptions) and a PPDA of 8.3. We see that Getafe’s pressing was more intent in the first half but more efficient in the second half which saw them score a goal to get them back into the game.

Juanma Lillo who worked with Guardiola during his time in Mexico often quoted about the importance of the first progression, “Everything is much easier if the first progression of the ball is clean.” From a context of positional play, which is a foundation of Setien’s system we see how he enforces this with the use of the keeper to break the first line of pressure with his pass.

Since Setien took over, we often see Ter Stegen playing a dangerous ball into the middle while his defenders stay wide to receive the lay off as the third man. The way the team is positioned during this first progression, it is easy to see how this tactic is very effective if successful. Here we see at least three options for the keeper including the most advanced player, Griezmann as the opponents look to man-mark. If the centre half decides to press Griezmann, he would need to compromise the defensive line as the last man, leaving room for Messi or Fati to dart in behind if the pass went through successfully.

During this game, we often saw Pique and Ter Stegen exploiting the new goal kick rule. It was Pique who would start the play by kicking the ball to Ter Stegen. We see the forwards, Mata and Molina ready at the edge of the box to press the keeper as soon as he touched the ball. But if Mata pressures, he leaves an open passing lane to de Jong. Given that he would need to press 12 yards, there is a high chance that Ter Stegen would find that pass through and progress up. As you can see this system is a high risk, high reward one.

Anticipating this tactic, teams often mark the players man-to-man all over the pitch making it very easy to punish a poor touch or a miss-pass with a counterattack. Ter Stegen, although very comfortable with the ball at his feet and training regularly in the rondo drills with the first team players, has been prone to make passing errors in the past.

In this graphic, we see the unsuccessful passes by Barcelona. Barcelona made 34 unsuccessful forward passes out which the ones made by Ter Stegen (#1) can be seen.

How did Barcelona look to attack the high press

The high line and intense pressing by Getafe meant it required a great deal of coordination, timing and concentration to beat the defensive line with a direct ball. Here we see early on in the game Busquets looking to play Messi early. Although Messi found the pass and almost put the ball in the back of the net, the play was ruled offside. 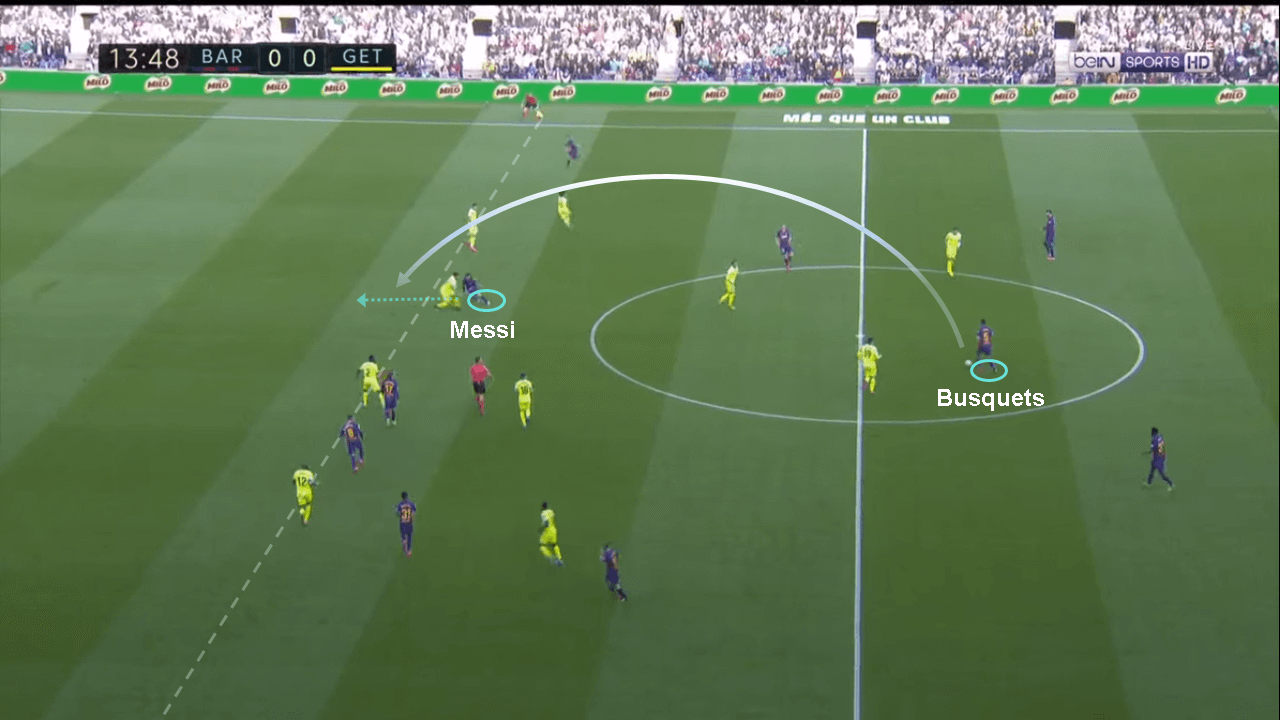 We also saw Barcelona pinning the back line with almost four players requiring one of the wide midfielders to collapse onto the back line to make it a line of five. With de Jong and Busquets staying behind to cover, the back line was pushed forward by Arthur, Fati, Griezmann and Messi. This gave a lot of room for Umtiti to push higher up in the left half-space looking to attract pressure and find a free passing lane. 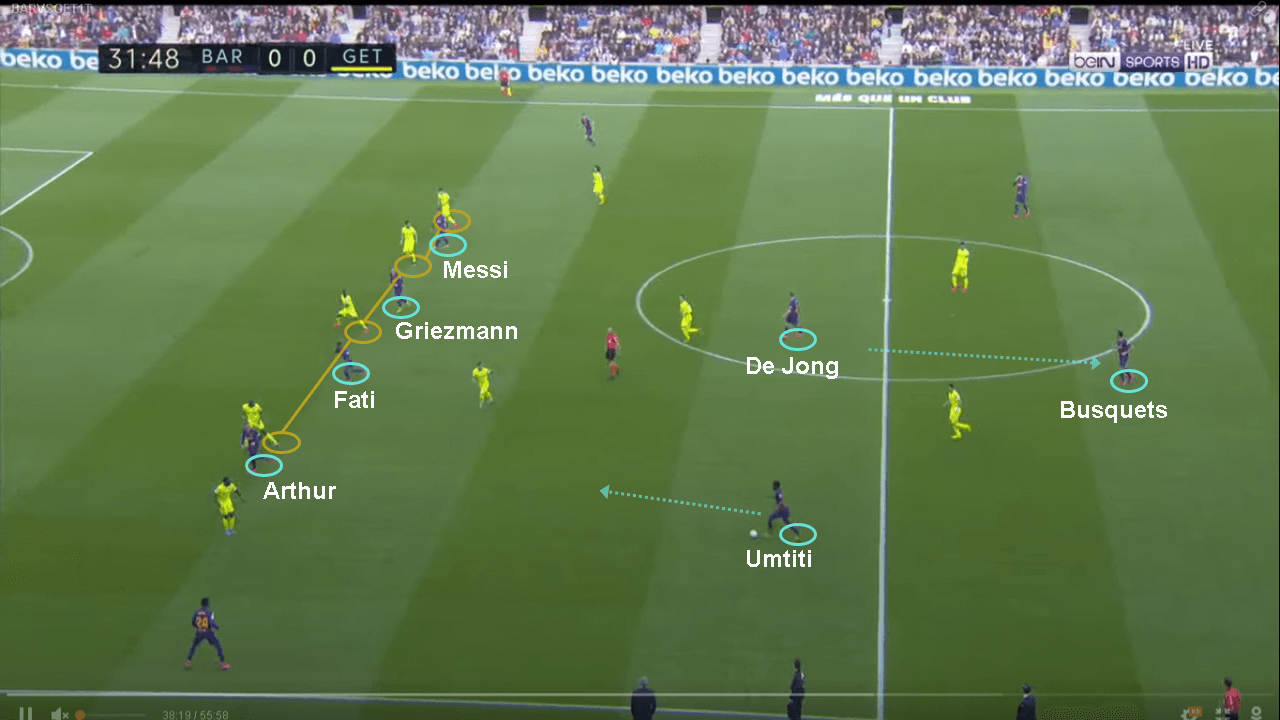 Behind Getafe’s defensive line, there were three areas that the forwards looked to attack. The central area was often attacked with Griezmann and Fati with runs looking for a penetrating ball. The wide areas were attacked by Firpo on the left flank and Roberto on the right flank. Barcelona scored their second goal with Firpo receiving a pass from Arthur who then crossed it into Fati attacking the central area, who dummied it for Roberto who was unmarked.

We saw a tactic used frequently to push the defensive line and make room for the diagonal runs. One of the players would make a dummy run in behind, pulling back a defender along with him who subsequently pulled the defensive line deeper. This gave a small room for another player to dart in behind without being called offside. Here we see Messi making a dummy run pulling the defensive line with him. His run gives room for Fati to burst forward while staying on, as Griezmann is easily able to play a ball in behind.

Barcelona managed to score the first goal in this way. It was Umtiti again who managed to find himself in an advanced position. Fati makes a dummy run towards the left, forcing Djené with him. Messi stands his ground and with the defensive line moving back gives him room to receive a pass. As soon as Etxeita sees Umtiti playing a pass to Messi, he pressures him. Griezmann, who is well onside thanks to Fati’s run now attacks the space left behind by Etexeita and Messi feeds him with a lovely nutmeg to assist the first goal in a beautiful sequence of play.

Early on during this season, we saw Sergio Busquets receive criticism with his advancing age and his role in the current squad. Under Valverde, Busquets often found himself giving away possession in dangerous around in front of Barcelona’s box or not working defensively enough as the team tried to keep possession higher up the pitch. However Setien seems to have resurrected the veteran finding the perfect role for him to continue providing an attacking threat as a defensive playmaker.

In this system, we see Busquets often dropping alongside Pique as the third defender. He either drops between the two centre-halves or beside them. Building up with three at the back, allows liberty of any of the three in possession of the ball to push forward into the half-spaces when not being pressured and finding the key passes to the forward players, similar to Umtiti’s pass to score the first goal.

When Busquets drops deep to become a third defender, de Jong often fills in the gap left by him. In this graphic we see Barcelona with a line of three defenders. Earlier on, when Getafe pressed with two forwards against two defenders, it was easy to push the play back and force the pass back to Ter Stegen. In this scenario, it becomes harder to press three defenders and this leaves space for Arthur and de Jong to receive the ball. Should both of them be pressured as well, Messi would often drop as a false nine to receive the ball and take it forward. Thus, it was impossible for Getafe to press in the same way with these movements.

When Busquets was in a central position, he also has an option to push up and receive a pass between the lines overloading the midfield. Here we see him pushing up into the hole with Roberto in possession of the ball to overload the midfield. Busquets is always the free player able to join either the defence or the midfield making him very effective.

How did Getafe cope with Barcelona’s positional play

It is fair to say that Getafe struggled to find a lot of opportunities to attack with 23% possession, but were nonetheless very effective testing Ter Stegen twice and almost equalizing. Barcelona were very vulnerable on the counter-attacks with the big spaces they left behind with their lateral players pushing high and wide into Getafe’s half.

In the second half we saw Getafe utilizing Cucurella, the wide midfielder in the buildup from the back. This was an interesting tactic as it allowed the back four to stay compact and close to Barcelona’s forward players in case of a loss of possession. Cucurella who is good with the ball at his feet was the free man who would drop on the wide flank to receive the ball in lots of space and then threaten Barcelona’s backline seeking a pass to Mata or Molina.

Although Getafe took more risks in the second half in search of a goal and played more attacking, it was not enough to see the hosts level at Camp Nou. Nevertheless, it was a headstrong performance by the visitors who were beaten by a more technical side with the better positional game.

This win saw Barcelona find the vital three points to keep them close behind the La Liga leaders Real Madrid. Despite playing Setien’s risky positional style of play that invites plenty of threat for oppositions, Setien has been finding success thanks to the quality of players that he is able to field. We still think that the Blaugrana are in a transition phase adapting to this new refreshing system which is a stark contrast to the two years under Valverde where they played a lot safer. It is vital for players like Ter Stegen to significantly minimize the mistakes in passing during the game to ensure that the risks Setien take don’t end up costing the team.

Getafe continue their steadfast campaign this season and hold their third place despite the loss but just sit one point above Atletico Madrid who are closing in quickly.