Bayern Munich came into this game knowing a win was needed to keep them one point clear at the top of the table. They have begun to hit their stride in recent weeks, and look like the one team out of the top four that are least likely to slip up. Under Hansi Flick they have looked rock solid at the back, whilst sturdy yet creative in midfield, thanks to the resurgence of Thiago Alcântara. Going forward, Robert Lewandowski doesn’t look like slowing down, Thomas Müller doesn’t look like growing old, and Kingsley Coman has returned from injury too.

For Köln, it is a very different story as they continue to look to pull themselves away from the relegation battle. Markus Gisdol has done a good job since coming in as Head Coach to replace Achim Beierlorzer and knew a result here would leave them nine points clear of 16th place. It wasn’t to be as Bayern ran out as 4-1 winners on the day, but there were flashes, particularly in the second half, where Köln looked like a side most definitely good enough to stay up, and with a game in hand over their rivals, they will fancy their chances to continue their climb towards mid-table safety.

This tactical analysis gives an in-depth analysis of this Bundesliga fixture. 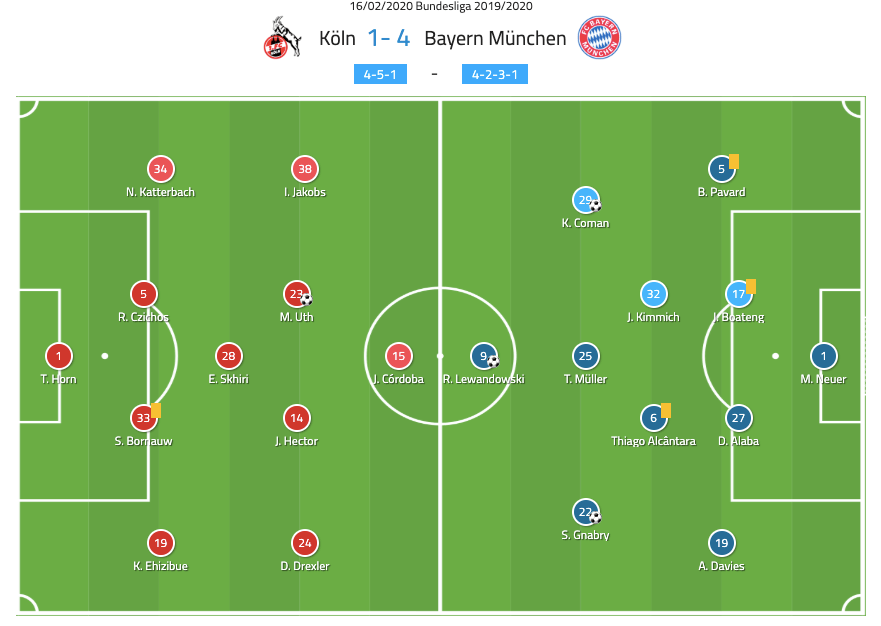 There were no big surprises in either side’s lineups. For Bayern Munich Flick fielded a 4-2-3-1. The front four of Coman, Müller, Lewandowski and Serge Gnabry were particularly devastating in attack, and I will discuss Flick’s tactics with regards to this group later on in more detail.

Having beaten Freiburg 4-0 two weeks ago, Köln kept the same team and fielded a 4-5-1 with Ellyes Skhiri sitting deepest out of the central-midfield three.

The attacking movement of Lewandowski, Müller and co

All of Bayern’s rivals for the title this season would have sat there and watched the first 12 minutes of this game and been very worried indeed. They hit the ground running and within five minutes they were 2-0 up. By 12 minutes, 3-0. It was a display of incredibly effective, fast-paced, and fluent attacking play which Köln had no answer for. Whilst Lewandowski’s domestic golden boot rival, Timo Werner, continued his dry spell in front of goal, Lewandowski had no such problems, and for the first half in particular he looked devastating in attack. He looks as strong as he has done at almost any point in his career, but regardless of his impressive talent as an individual, it was the rotational play of Bayern’s front four that was truly outstanding.

A perfect example of this was Müller’s movement to create space for Lewandowski for the opening goal in the third minute.

Müller’s movement to create space for Lewandowski was outstanding for the opening goal. The image below shows how by moving forward from his central position, he brings Sebastiaan Bornauw forward with him, creating space in behind for Lewandowski to move into. Receiving the pass, Müller then played Lewandowski in behind the Köln defence. Lewandowski had a lot to do from this position, and it was a terrific finish from the forward. 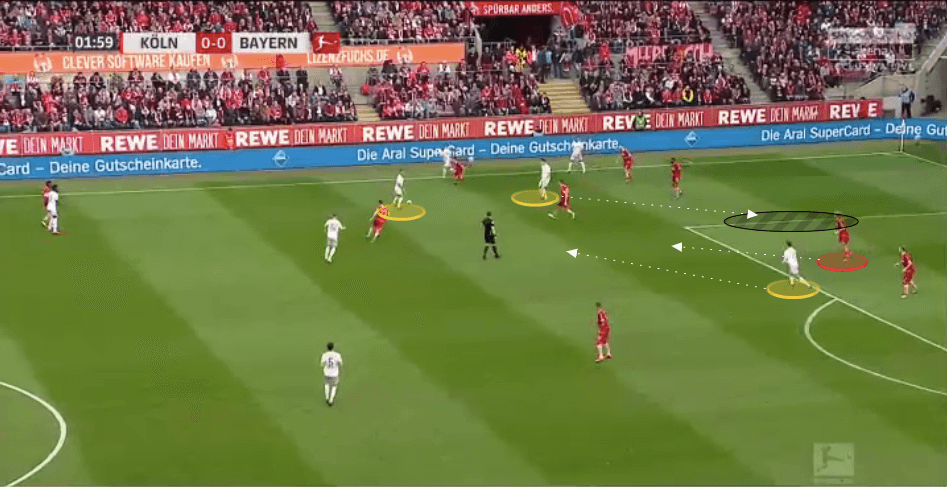 Müller has been excellent this season, and his quick thinking inside the 18 yard-box gave him his second assist in as many minutes at the start of this game. As the ball was threaded through to him it highlighted his vision, whilst unfortunately for Köln, showed serious defensive naivety, so early in the game.It started with Bornauw unnecessarily coming out of the defensive line to press Lewandowski, leaving space between Kingsley Ehizibue and Rafael Czichos for Coman to sit free in. As the ball is played into Müller, Czichos makes a slight movement towards him, with Noah Katterbach stuck between two minds with Gnabry sat free to his left. This movement inside from Czichos is enough to give Coman time and space to receive from Müller and slot home. 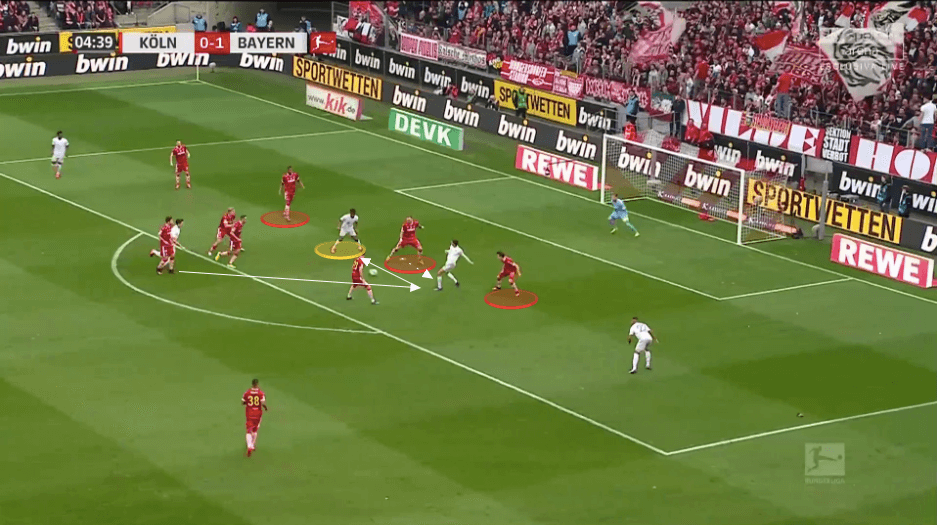 Bayern are excellent at creating space through bringing the centre-backs forward and did so on other occasions throughout this game. The image below is another example but this time it is Lewandowski creating space for Gnabry in behind. 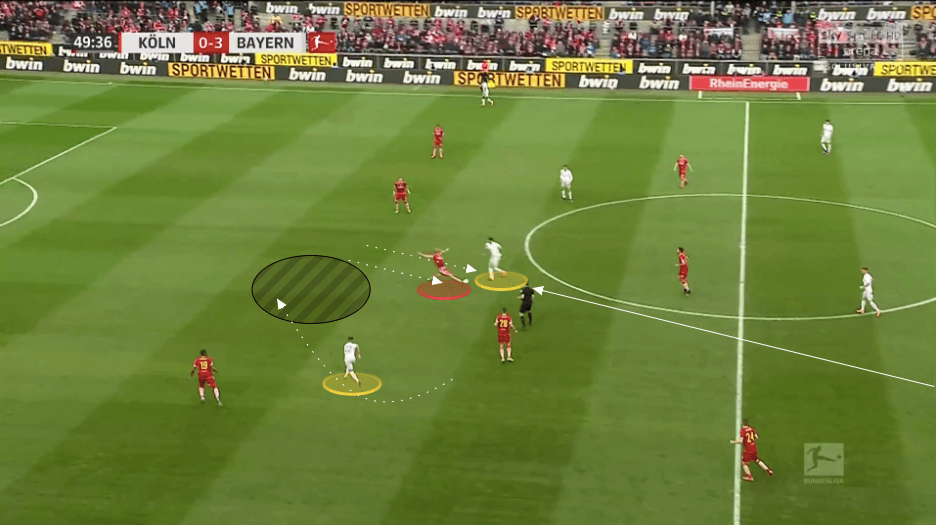 Müller, and Lewandowski were fluid with their positioning and would drift into wide or deeper central positions throughout the game, with Gnabry and Coman adapting accordingly. Müller’s reading of the game is still exceptional, with the image below showing how he sees Gnabry drifting inside to contest for possession, and instinctively pushes into the wide position vacated by Gnabry. As the ball bounces loose, the onrushing Lewandowski is able to quickly slot the ball through to him. 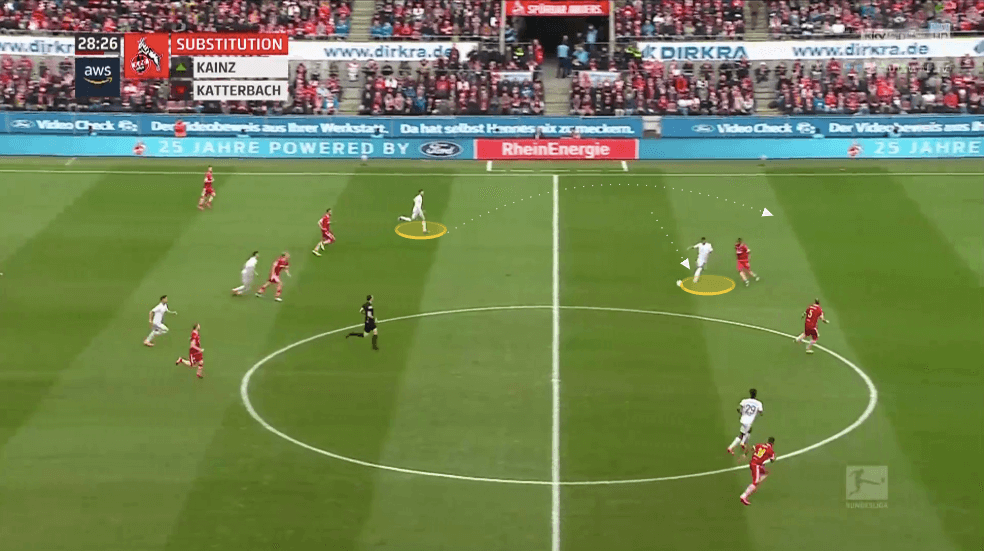 As mentioned, Müller and Lewandowski would also drop deep. Müller in particular would do so, and was able to help Bayern break the lines with passes from wide areas, with both Kimmich, and Thiago dropping deep themselves to show for the ball. Müller could simply drop in between Köln’s midfield and defensive lines and receive in the space. Bayern were consistently able to find space in between the lines in the first half. 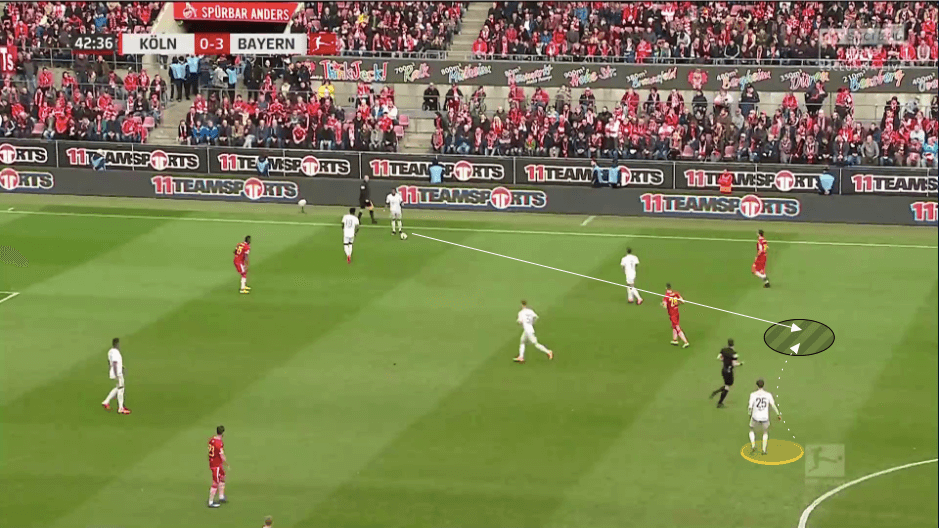 It wasn’t just Müller that facilitated this. Thiago continued his incredibly impressive start to 2020 with another excellent display, as he toyed with Köln’s midfield throughout, time and time again finding space to receive passes in space and orchestrate Bayern’s forward play. 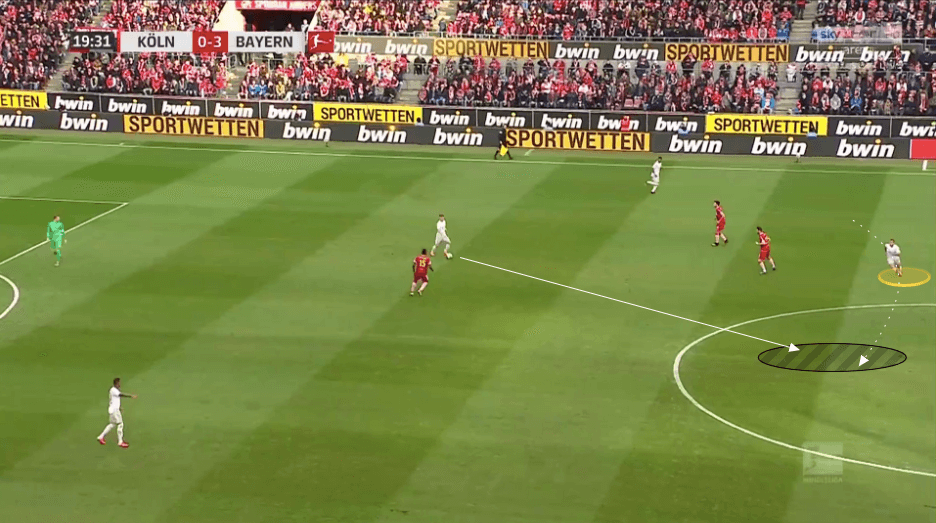 As much as the individual movement of players such as Müller and Thiago allowed them to play through Köln and have their players receive in space in between the lines, it was also at times down to the positioning of Bayern’s supporting players that allowed them to receive.

The image below shows Gnabry positioned to receive the ball in between Köln’s back line and their midfield. However, it is Alphonso Davies’ positioning on the far left flank that draws the attention of Köln’s right-back Kingsley Ehizibue, whilst also the positioning of Müller that occupies both of Köln’s centre-backs, allowing Gnabry the space to receive. 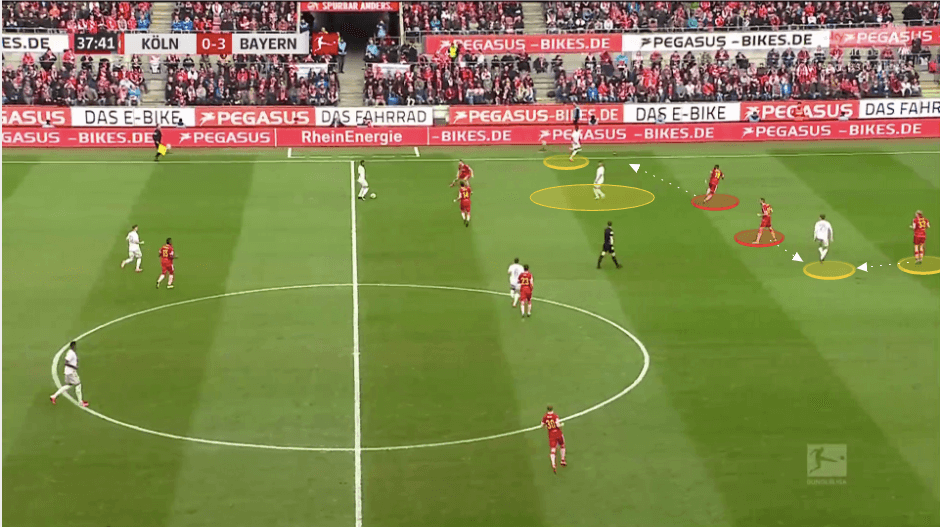 The more that time passes, the more baffling it becomes that Gnabry wasn’t deemed good enough to make the grade at Arsenal, let alone at West Brom. This surely has to be one of the biggest misjudgements of talent in football in recent memory. Gnabry was excellent for Bayern and seemed to thrive in being able to drift from wing to wing, as well as cutting in from the left onto his right foot. He scored twice doing so, with his first coming from a corner. Gnabry showed great poise to bring the overhit corner down, touch inside and feign the shit, causing the Köln defender to dive in. Gnabry easily bypassed the challenge and tucked the ball away into the bottom corner with aplomb. 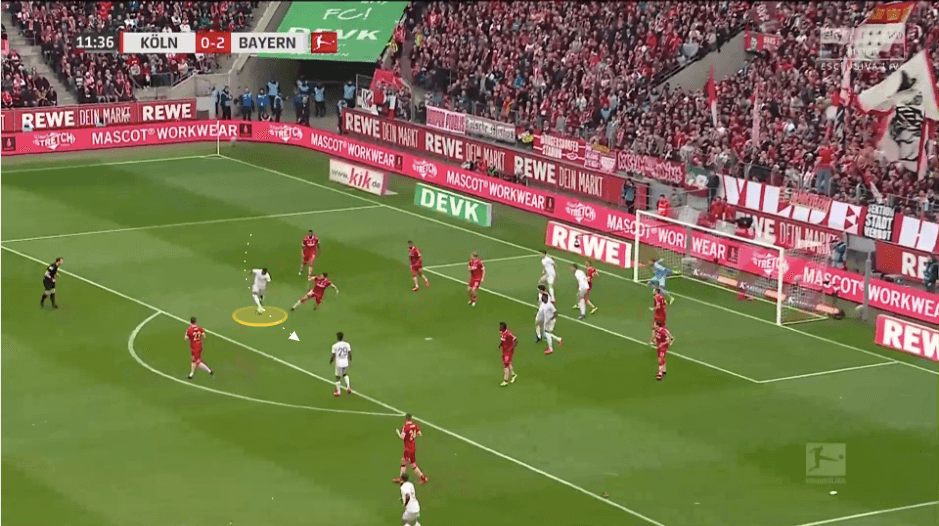 It was a similar story for his second as he drove inside, once again put a Köln defender, Jonas Hector, on the floor, and curled the ball inside the far post. 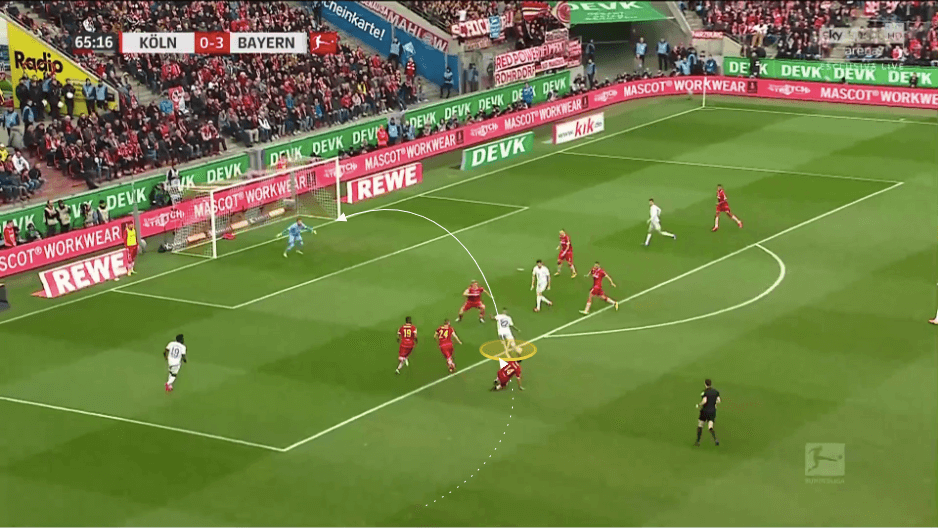 How Köln looked to play past Bayern’s high defensive line

It’s difficult to talk much about what Köln did in the first half, as they were so outplayed by the visitors.

Bayern were able to cramp the midfield when without possession, holding a very high line which made it all the more harder for Köln to get the ball out of the busy midfield. Should they play over the top, Manuel Neuer was able to sweep the ball from his natural high positioning. 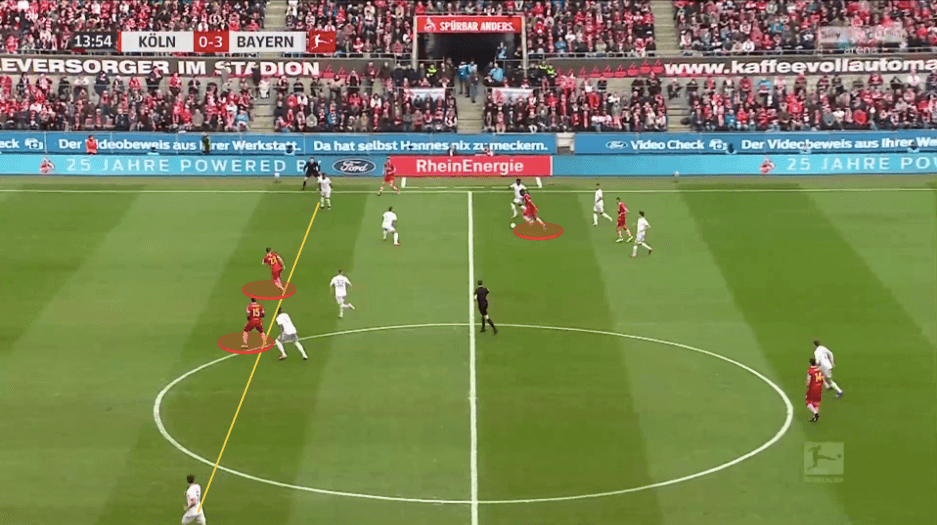 Nevertheless Köln had chances against Bayern’s high line, and perhaps lacked a little quality with their forward movement and through passes. However, as Bayern went 3-0 up, and particularly after their fourth goal, spaces started appearing behind their defence as they appeared to ease up. They could even perhaps feel unlucky to have only scored one with an xG of 2.21 in the second half, on top of having two goals disallowed for offside. 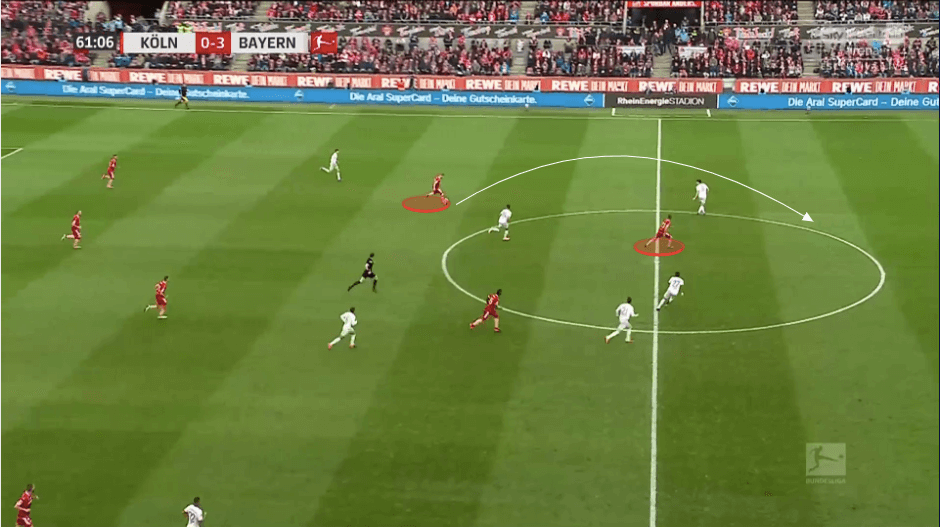 As Bayern’s defence began to get stretched, Mark Uth should have squared the ball in the 69th minute with Dominick Drexler in space on the right-side as we can see in the image below. 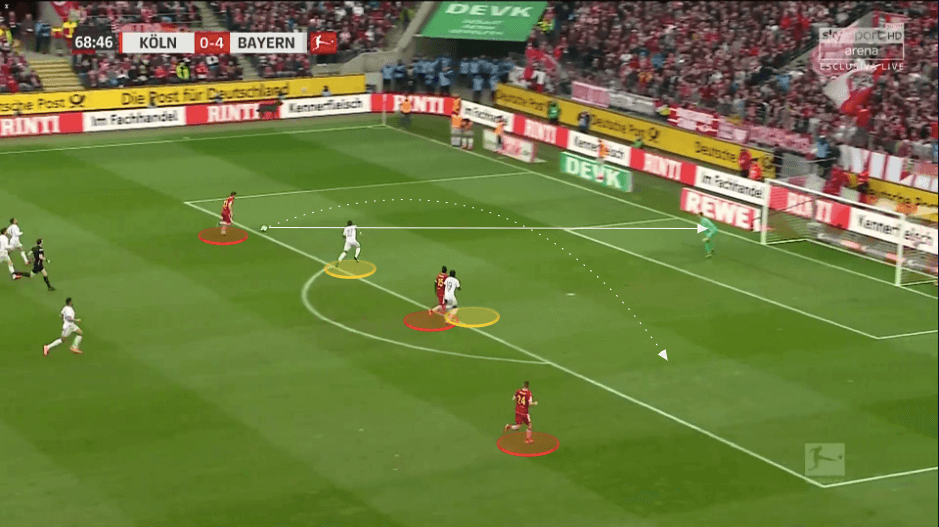 Fortunately for Uth his teammates didn’t share the same lack of awareness in the final third, and their only goal of the game in the 70th minute was a well-worked goal where Köln were able to hit Bayern on the fast break. 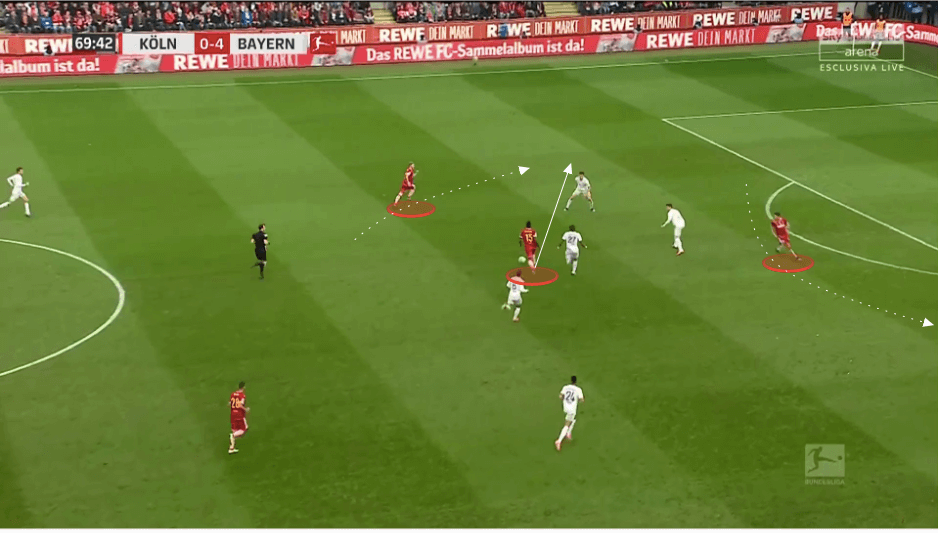 This time Uth was on the receiving end of a pass that he should have played two minutes earlier, as he found the same space Drexler had been in, where he could tap home from six yards out. 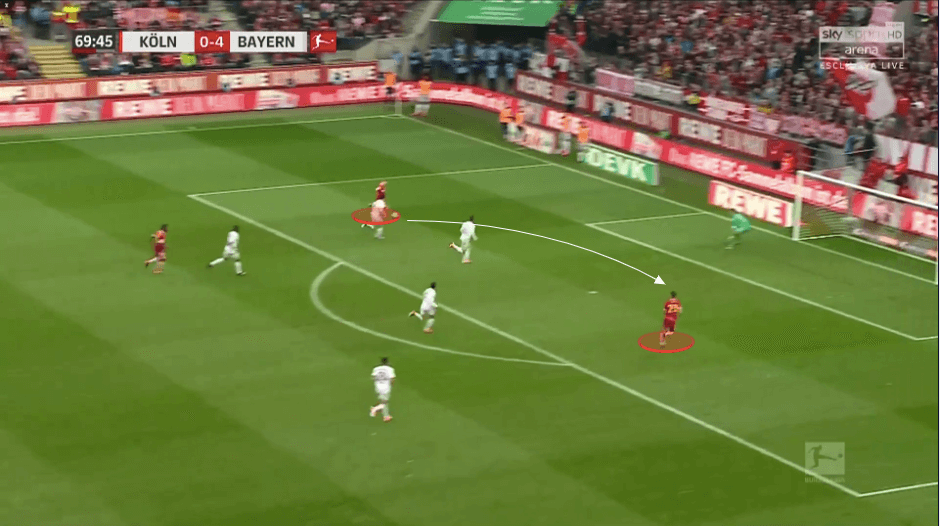 Bayern seem to be hitting form at the right time and have all the momentum going into the final stages of the league. This was another routine win for Flick’s side, who have only dropped two points since losing to Borussia Mönchengladbach at the beginning of December. 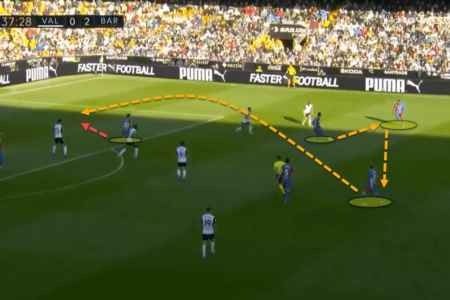 How Xavi has taken inspiration from Bielsa, Pep and Enrique in his quest to revitalise Barcelona – tactical analysis

A once rapturous super-team at the pinnacle of European and world football, Barcelona have fallen from unimaginable heights over the […]