In the 24th round of the league, Gennaro Gattuso’s team travelled to Sardegna Arena and looked to continue to produce some positive results after they beat Inter in the Coppa Italia. Finally, Napoli earned a clean sheet in Serie A as they beat Cagliari with Dries Mertens goal.

Rolando Maran’s team were declining in terms of results after a strong start at the beginning of the season. They already failed to win in their last eight games, including the loss against Genoa last week. Their road to continental competition was fading.

In this tactical analysis, we will show you how Napoli beat Cagliari. It is an analysis that focuses on tactics.

The home team had their key player, Radja Nainggolan missed the game due to suspension. Their midfielders were Luca Cigarini, Nahitan Nández and Artur Ioniţă. Gastón Pereiro returned to the team and supporting Giovanni Simeone with João Pedro. They switched to a back four in this game, played in a 4-3-2-1 formation.

Gattuso rotated his team after the midweek fixture, though they were still playing in a 4-3-3 formation. Kalidou Koulibaly was not 100% fit, hence, Konstantinos Manolas partnered with Nikola Maksimović at the centre of the defence. Elseid Hysaj was moved to the left-back as Mário Rui was given a chance to rest. Fabián Ruiz returned to the right advanced midfielder position; Eljif Elmas was pushed to the left-winger position; Arkadiusz Milik was not in because of knee inflammation.

To begin with, we explain the press of Cagliari. Maran’s team tried to defend high, but they failed to disrupt the build-up of Napoli as there were structural issues.

For their defensive shape, they stayed in a 4-3-1-2 to defend. Both forward players approached the central defenders, as, in the below image, Simeone and Pedro kept their eyes on Manolas and Maksimović. The attacking midfielder tried to mark the sole pivot, which were Pereiro and Demme in this case. The intention was clear, they tried to prevent the central penetrations of Napoli through the pivot.

Aside from the assignments of the front three,  the duties for the wide midfielders were to mark the full-back.  As shown in this image, Nández came forward and wider to mark the left-back (Hysaj). 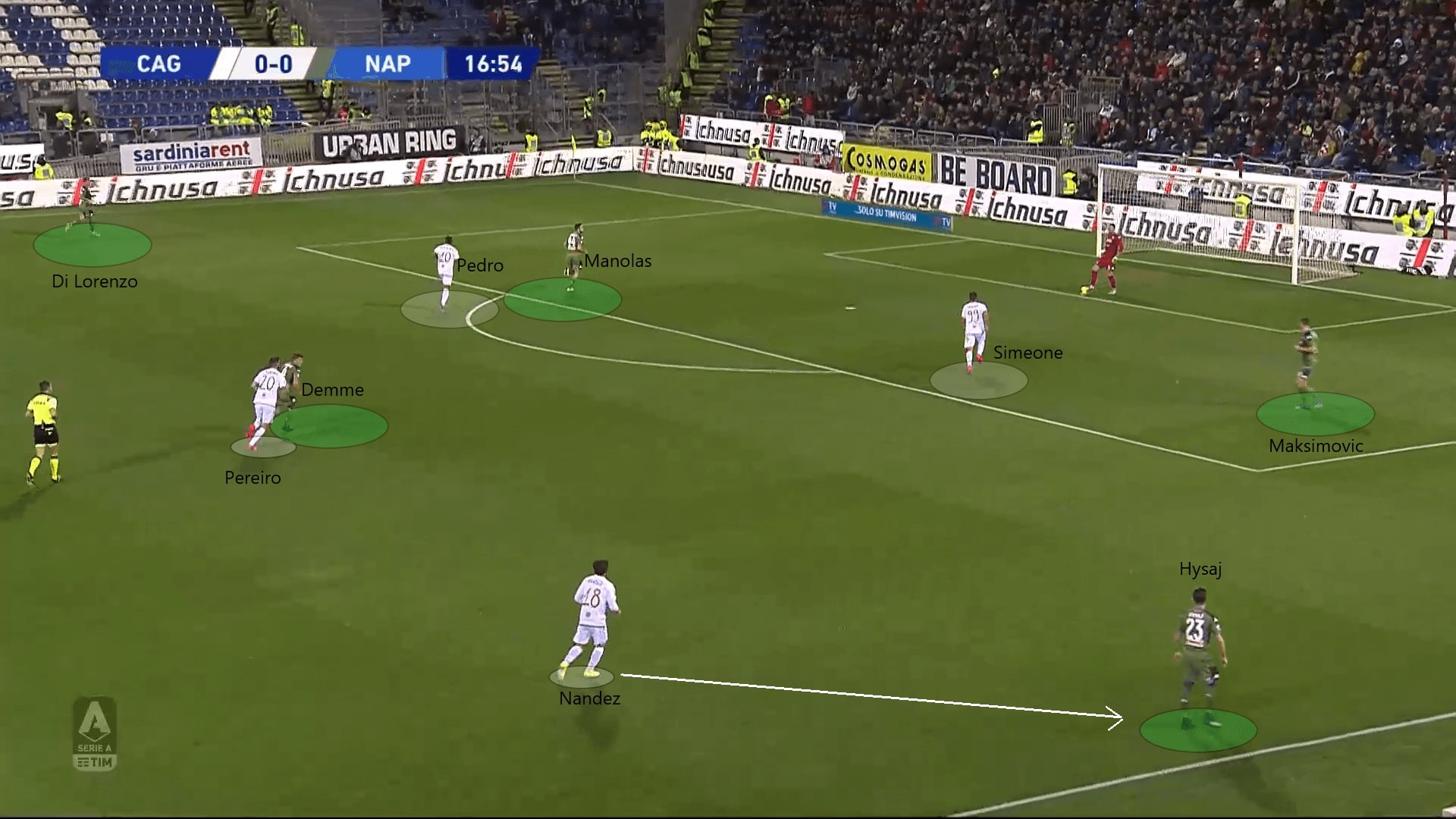 The issues of their press were mainly twofold. First, it was the distance of the wide midfielders and the full-backs. As the Cagliari midfielders were coming from a deeper position, they were far from the full-backs. It was difficult to intercept the ball before it reached the full-backs. As we see in this image, Hysaj had spaces and time to adjust his body orientation to open the passing lanes to the midfield. Nández was far away from reaching him.

Second, the marking at the midfield was far from tight. On some occasions, they let Demme received the ball after Napoli switched the ball wide. Or, in this example, when a Napoli advanced midfielder (Ruiz) dropped deep, the Cagliari midfielder did not track him, who was Cigarini here.

Therefore, despite being pressed, Napoli still kept 54.59% of possession and still found a way out. Although they were forced why initially, they could still progress through the centre given the loose marking on the midfielders. If not, they could still return the ball to David Ospina as Cagliari would not press the return pass. 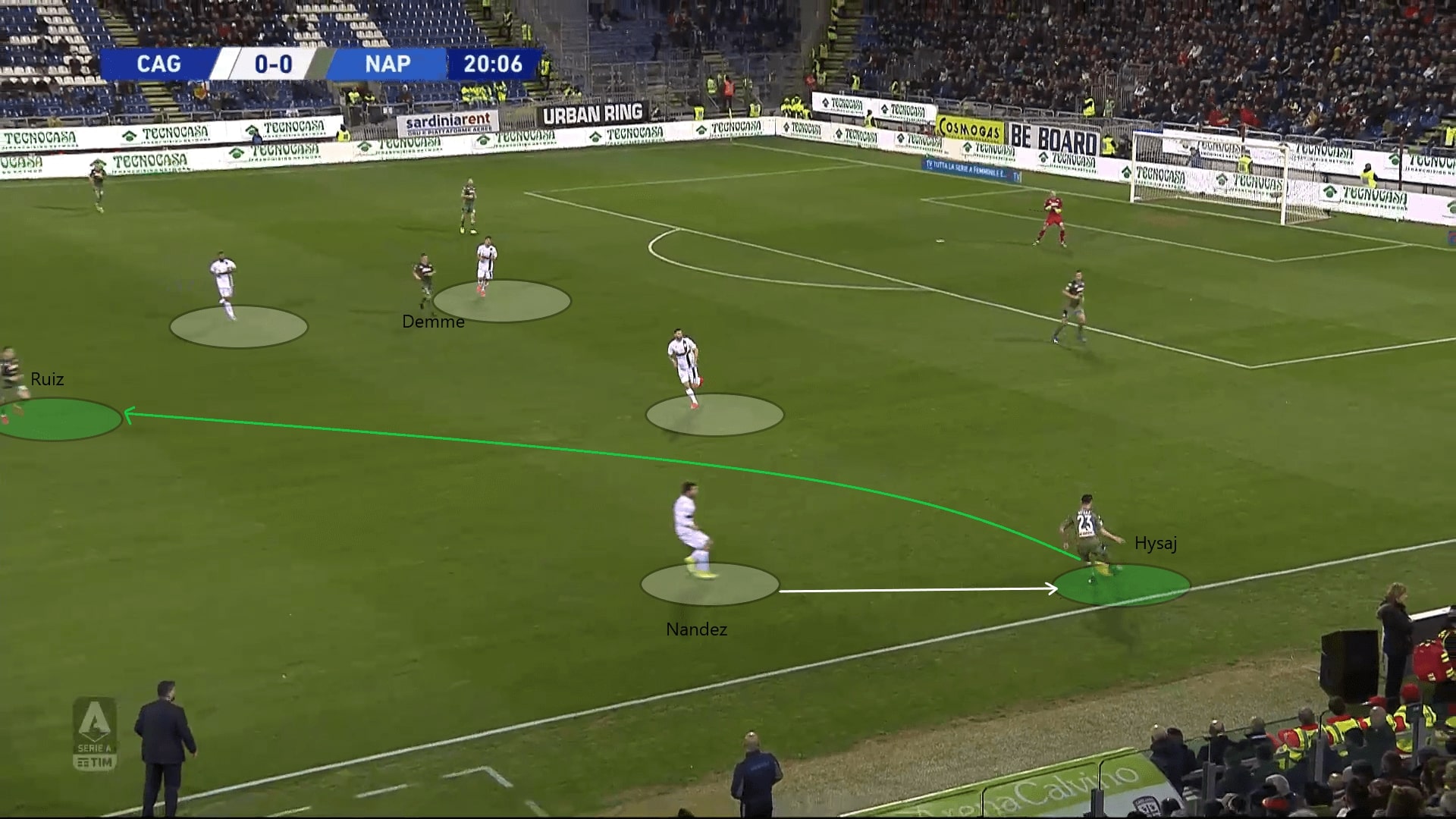 The attack of Napoli

Napoli insisted to play out from the back. In this match, their regular left players, Rui and Lorenzo Insigne were on the bench, Napoli did not enjoy the smooth left channel as they did in the previous games. Therefore, the positionings of full-backs remained lower and Napoli’s first phase of the build-up was a back four.

The full-backs of Napoli stretched the pitch and made the pitch big, providing the width on both sides. Since Demme was the sole pivot, when he moved forward, an advanced midfielder would drop to ensure the central zone was occupied. Both of these were illustrated with the following image. With at least five players in the first phase of the attack, Napoli enjoyed a numerical advantage on most occasions. 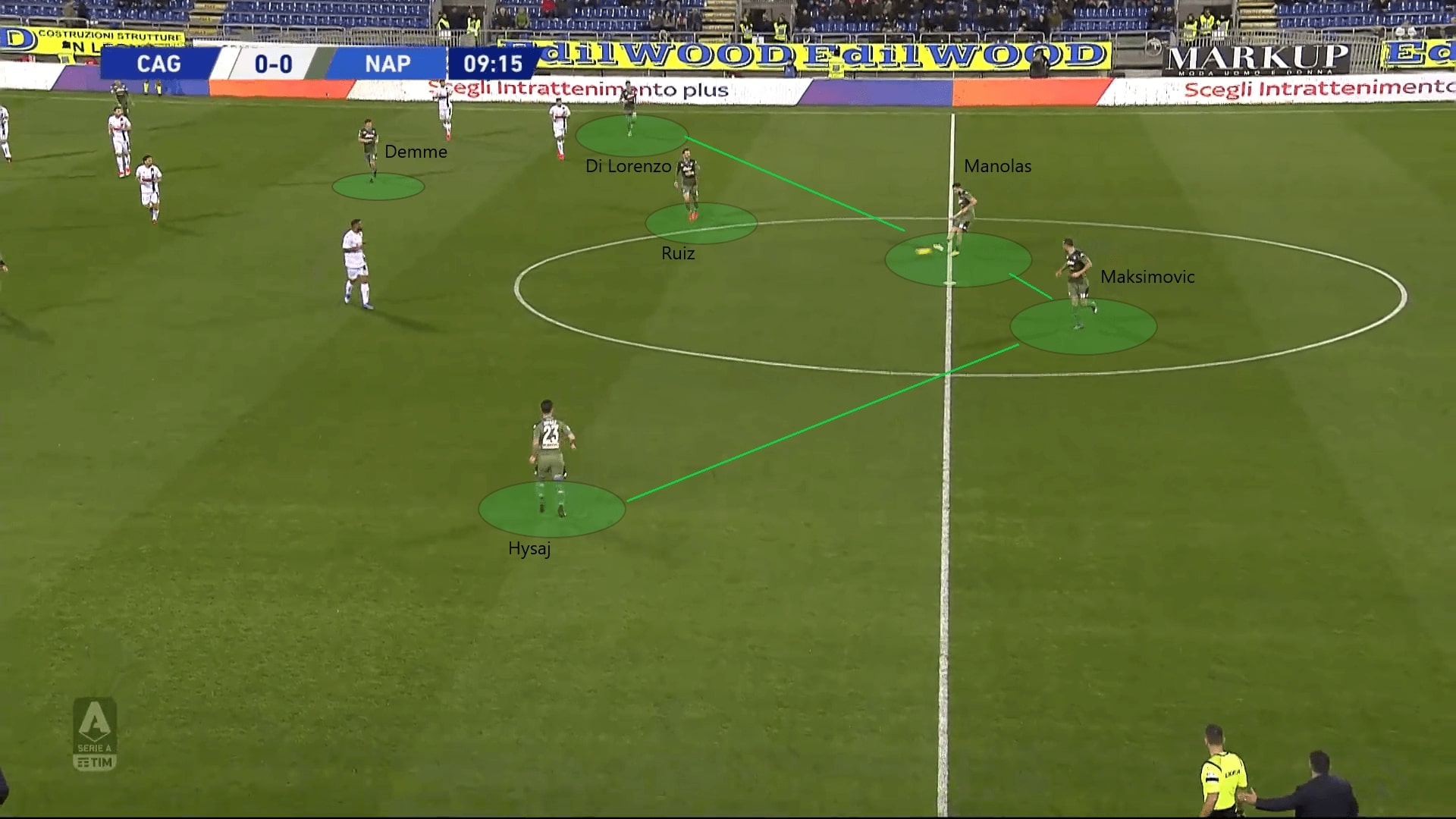 A possible explanation of the choice of playing José Callejón ahead of Mateo Politano was their difference in playing style. For a left-footed player playing on the right-wing, Politano tended to cut inside, just liked what Riyad Mahrez liked to do at Manchester City. However, the right-winger was assigned a different task, Gattuso felt Callejón was better in terms of getting behind the left-back and crossing with his right foot.

It was a tactical adjustment based on the features of  Cagliari’s left-back, Luca Pellegrini. Offensively, he was a threat of the opponents when he pushed high to attack; also, the former Roma man tended to leave his position to press very early. This habit would generate huge spaces behind him. With Callejón playing as the right-winger, he could exploit those spaces and create some chances for Napoli in the final third. Defensively, this could possibly ease the pressure of the right-back. Callejón’s positioning might keep Pellegrini lower if he was aware of the Spaniard.

As, in this example, Napoli won the ball high on the pitch. Pellegrini was out of position because he came out to close Ruiz and failed to win the ball. Then, Piotr Zieliński quickly picked the no.7 of Napoli, as Callejón already positioned himself behind the left-back. This quick pass allowed Gattuso’s men to access the box early with a cross near the byline. 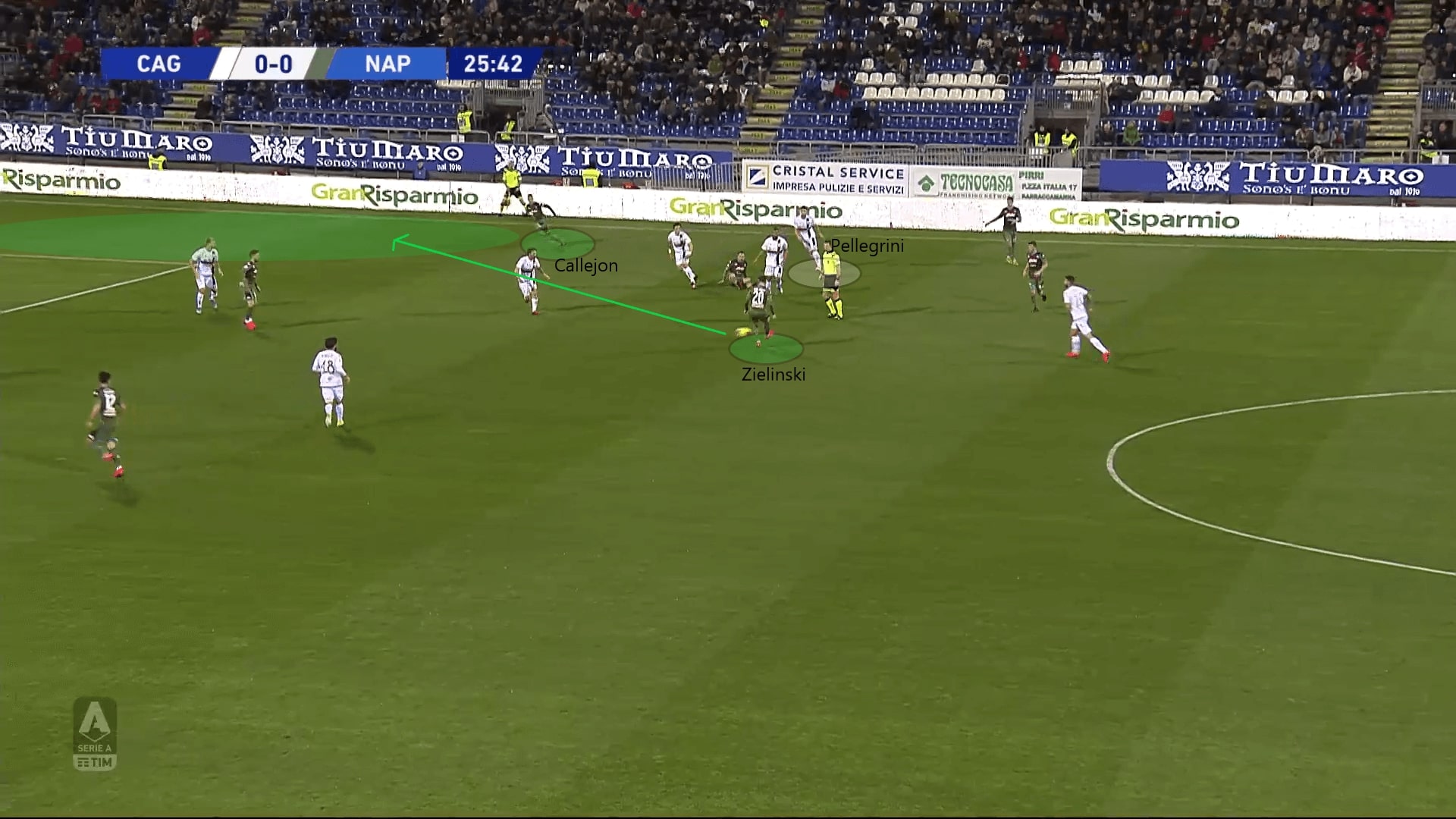 Since Napoli needed a goal, Gattuso brought on his main man, Insigne to replace Demme. Ruiz dropped to the midfield. This change made Napoli more unpredictable in the attack, especially in the final third. Mertens and Insigne knew each other well, they can swap their positions, play quick passes. Also, both of them liked to play in the left half-spaces, adding on Zieliński and the left-back, or even Elmas, Napoli wished to create an overload on the left. If not, at least they took the majority of Cagliari players to that flank.

This example demonstrated the changes in Napoli’s attack. They committed five players on the ball side, dragged eight white shirts with them. On the flank, they had Hysaj to provide the width. Insigne rotated the position with Mertens, so the Belgian stayed at the half-spaces. They had the support from Zieliński and Elmas on the strong side. Even if they lost the ball, they should have enough number to counter-press instantaneously.

Another favourable condition created by this approach was the situation on the far side. Their right-winger, Callejón, was isolated against the left-back (Pellegrini) on his blindside. When Zieliński crossed, Pellegrini could either focus on the ball or the player, he could not do both at a time. Again, it was another run behind Pellegrini by the Spaniard, this time he could not meet the ball. 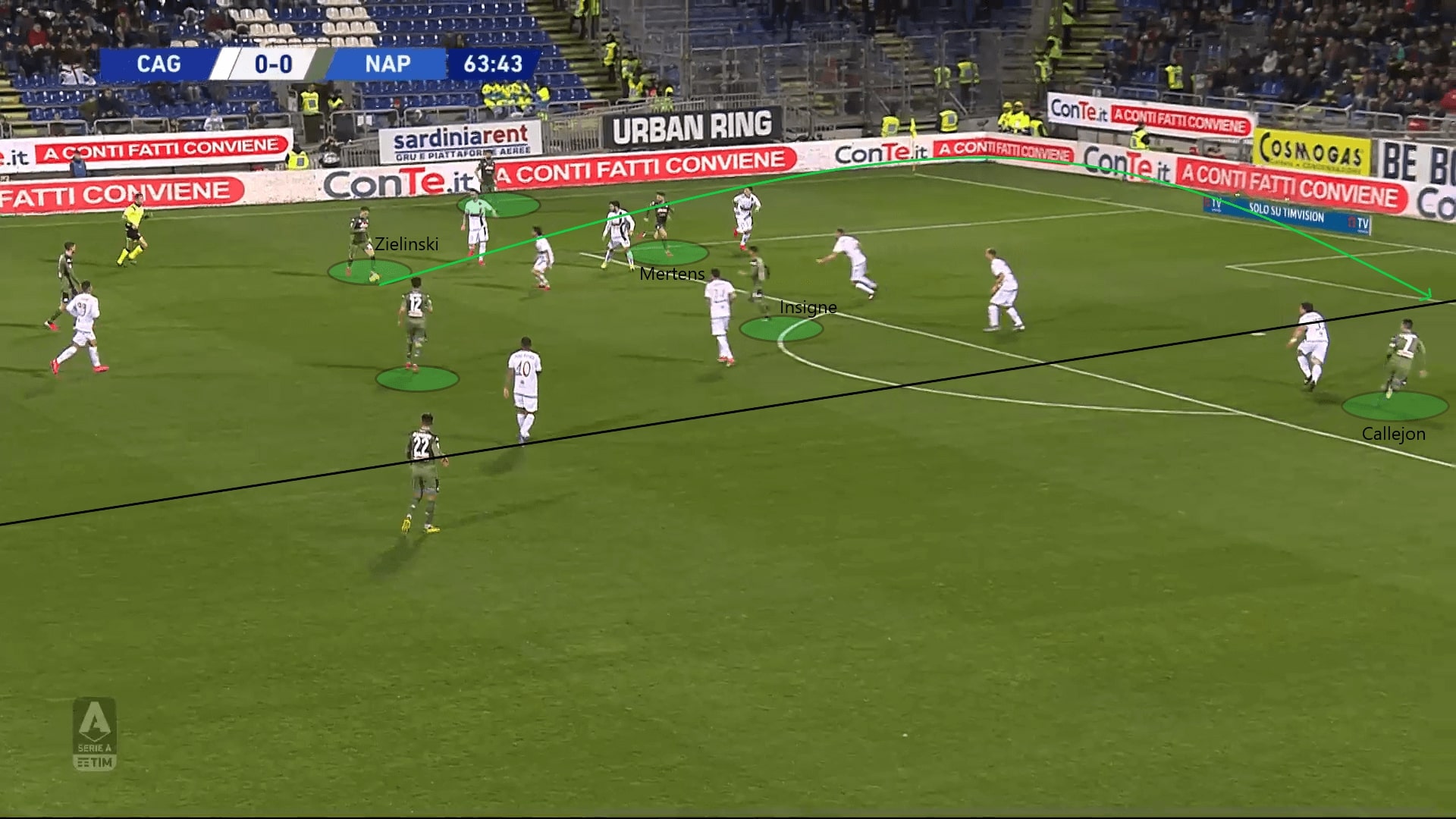 For the only goal scored by Mertens, it worked with the same theory. Insigne also roamed from his position and let Mertens moved to the half-spaces, eventually, the Belgian scored a beautiful goal.

Napoli defended with a 4-4-2 block in hopes of distracting the opponents’ first phase of the attack. The players were flexible in choosing their positioning, mainly depends on the ball. One of the advanced midfielders would step up to form the first line of defence with Mertens; Demme pushed slightly forward, formed another line with another defensive line with the wingers and another advanced midfielder.

When the ball was on the left, Zieliński stepped up as shown below; when it was on the right, then Ruiz would step up and the Polish dropped deeper. With this setup, Gattuso intended to prevent the central penetrations.

The general shape of the block was illustrated in the below image. Since the ball was on the right centre-back’s (Sebastian Walukiewicz) feet on this occasion, Zieliński stepped up. When defending in this shape, the front players had to focus and shut the passing lanes to the midfielders, as they were overloaded at the central third. As shown below, the 4-3-2-1 formation of Cagliari had three midfielders, and they could overload the two of Napoli. The front players must not let the pass available at the centre. 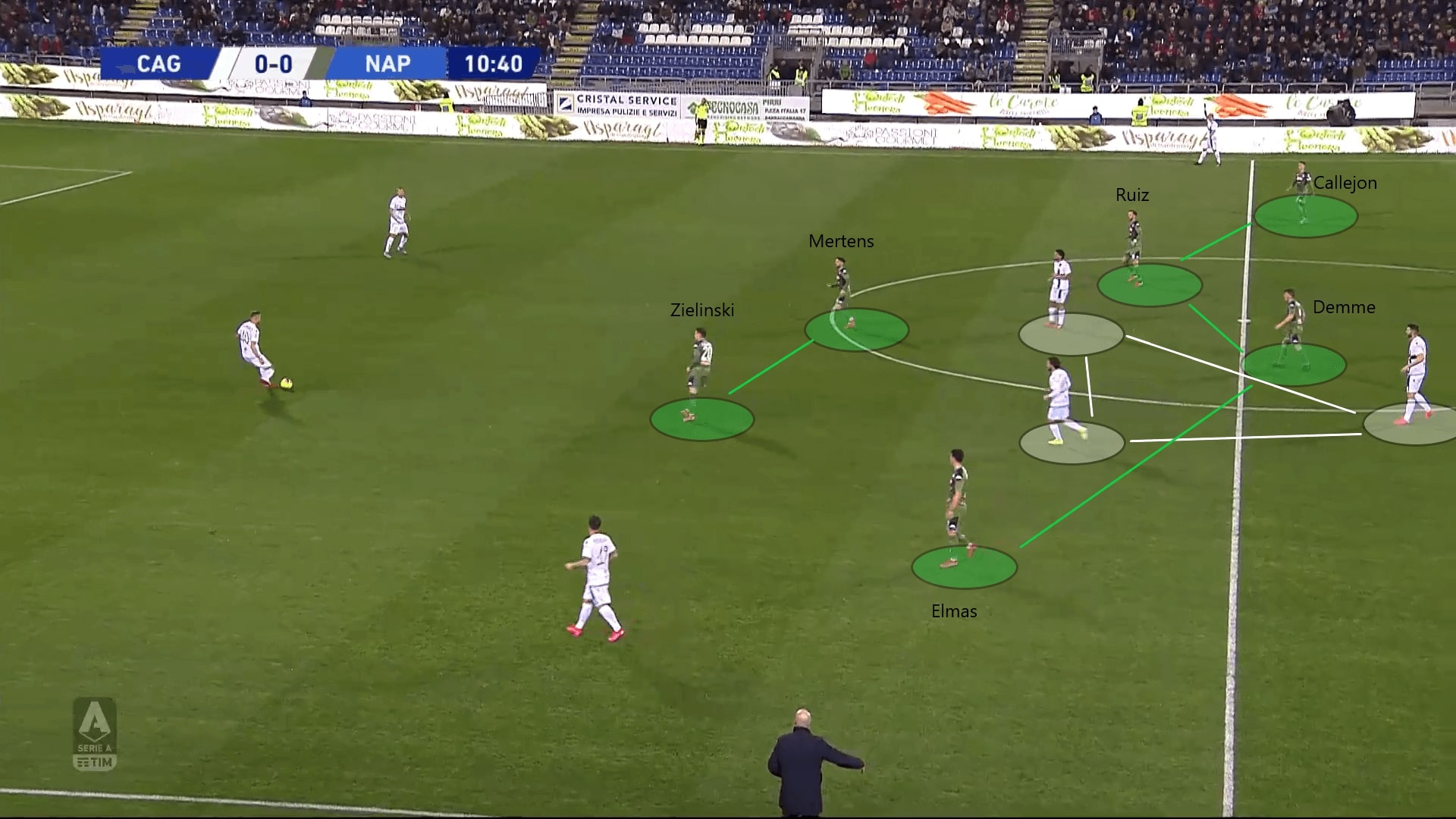 Cagliari did not have a clear form of attack. In the first 30 minutes of the game, they could not develop meaningful attacks into the final third because of the press of Napoli. In the first phase of the attack, they pushed Pellegrini high and wide and kept the right-back (Fabio Pisacane) slightly deeper. This was inefficient as they lacked options and vertical penetrations as explained.

As the game went on, Maran tried to release both full-backs. Pisacane also pushed higher in this phase. Also, the front players and midfielders dropped more to the midfield, which distracted the Napoli players. As an example, when Pereiro dropped deep, he drew the attention of Elmas, set Pisacane free. This movement would create more spaces for the right-back if Elmas approached Pereiro. If not, then the Cagliari’s no.20 became a free player to receive the ball. Cagliari looked a bit better and more stable in this phase. 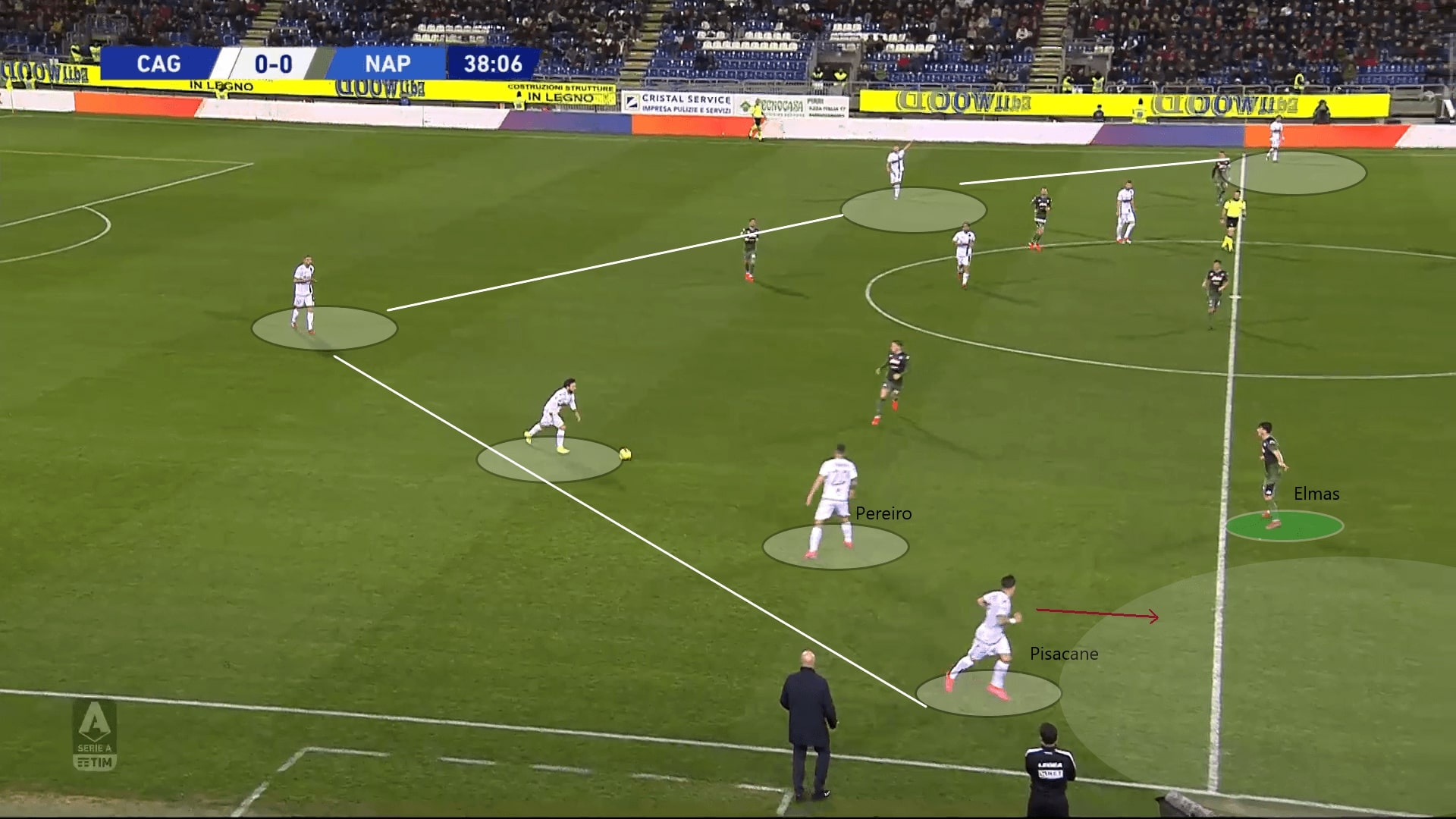 However, the main source of their attacks was Pellegrini. The left-back pushed himself high on the pitch and joined the attack on most occasions. He occupied the left channel and allowed the left attacker (Pedro) and midfielder (Ioniţă) to stay at the centre.

Pellegrini could try to take on an opposition and progress to the byline, or, crossed early. He could also make an inward pass which found the central players. His presence dragged forced the right-back (Di Lorenzo) to step out early, and, it increased the gap at the half-spaces for an attacker to run into. In this image, since Pereiro stayed at the centre, Pellegrini just picked him with a pacey pass, which allowed Cagliari to access zone 14.

Pellegrini had some decent offensive stats in this game, with all four dribbles were successful; five crosses; won five out of eight offensive duels; there were also three progressive runs and a shot assist. 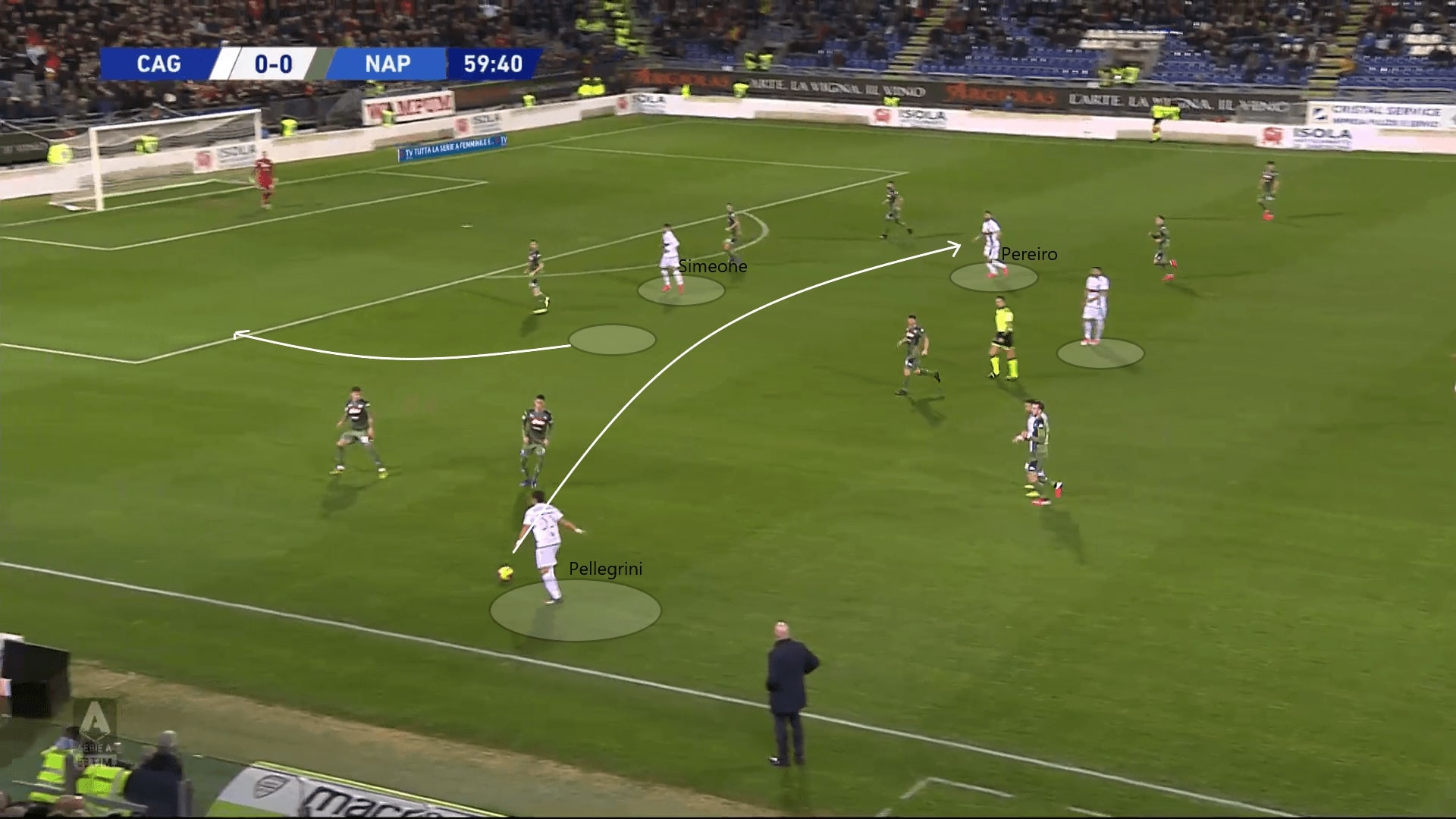 This was not the smoothest match of Napoli, but they managed to win all three points in this away game. Despite being pressed, Napoli still played out from the back most of the time. Again, Gattuso reacted quickly to make his change at the 61st minute, which was rewarded a goal. Currently, they 33 points, two behind the continental competition zone.

For Cagliari, their slump continued. They were outplayed by Napoli in this game, offensively and defensively. Maran had to find a solution to solve the issues of the team as soon as possible. They could be more patient in their attack, they shot too early before reaching the box. In the ten shots of the game, only two of them occurred in the box, considering their xG was 0.38, for every shot they have taken, the average goal scoring chance was 0.038, this was not ideal at all.