First versus second. Bayern Munich vs RB Leipzig. A game which had huge and potentially decisive implications on the Bundesliga title race. With both of these sides having reputations for scoring at will, it was perhaps a surprise for this one to play out as a goalless draw, becoming Bayern’s first game this season where they haven’t scored, and only Leipzig’s second goalless game (although second within three games, after losing 2-0 to Eintracht Frankfurt).

Nevertheless, there were plenty of chances and talking points from this encounter – a game in which both sides will feel unfortunate to be coming away without all three points from. This tactical analysis will provide an in-depth analysis of the tactics used by Julian Nagelsmann and Hansi Flick as, due to Borussia Mönchengladbach’s game being postponed and Borussia Dortmund falling to Bayer Leverkusen, the result left both sides in the same league positions in the table that they had resided in before kick-off. 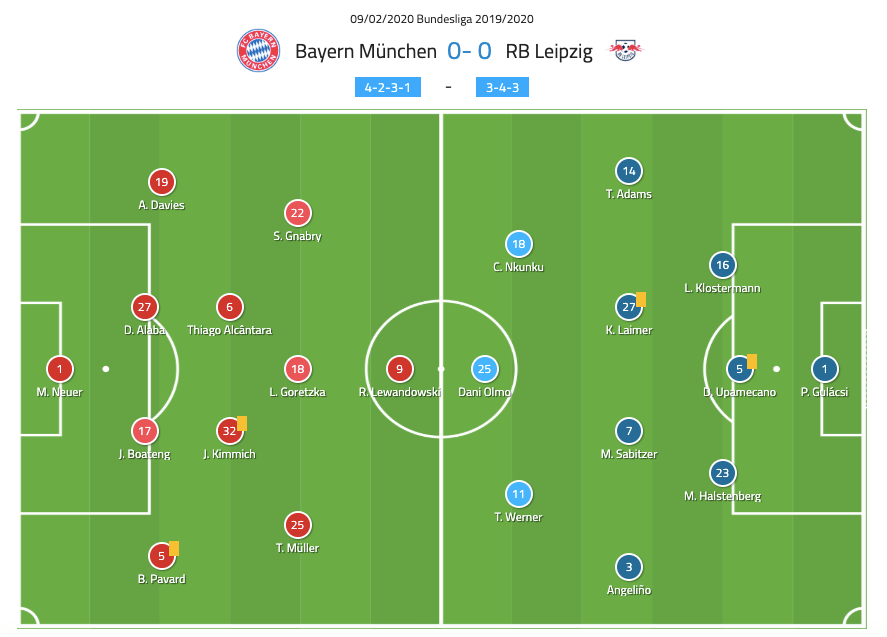 Bayern Munich fielded a 4-2-3-1 with Benjamin Pavard pushed back to right-back with Jérôme Boateng coming into to partner David Alaba at centre-back. Leon Goretzka appears to have turned a corner with his form and played in front of Thiago Alcântara and Joshua Kimmich.

Leipzig set up in a 3-4-3, however, their shape changed in and out of possession, which I will discuss later. Dani Olmo scored his first goal for Leipzig midweek and started in a front three with Timo Werner and Christopher Nkunku, whilst Angeliño, brought in from Manchester City, started on the left flank.

How Leipzig set up defensively and the impact of Tyler Adams

With last week’s last gasp equalizer to secure a draw with Mönchengladbach, Nagelsmann was surely all too aware that a loss at Munich could spell long term disaster for his side, as it would have left them four points behind the league leaders. With that in mind, Leipzig approached this game very cautiously with a clear gameplan. They looked to avoid pressing with any real intensity (they had an 18.3 PPDA), concede possession (they had only 36% possession over the course of the game), frustrate the opposition, and hit them quickly on the counter-attack (nine of their 27 total attacks were counter-attacks). Doing this against a side with elite creators like Thiago and Thomas Müller, is, of course, easier said than done, but at the end of the 90 minutes, it was probably fair to say that although they rode their luck, generally speaking, they held up defensively, and had enough chances where Nagelsmann would have felt aggrieved to have come away with just one point, despite failing to hit the target with one of their nine shots.

Leipzig were fluid with their formation. Defensively they were in more of a 5-2-3 than a 3-4-3, at least when Bayern looked to play out from the back. If the ball was worked down one specific flank by Bayern then the wing-back on that side would look to push up whilst the wing-back on the other side would tuck round ensuring that Leipzig always had a back four. When Bayern had the ball in a more advanced area they would even fall back into a 5-4-1. 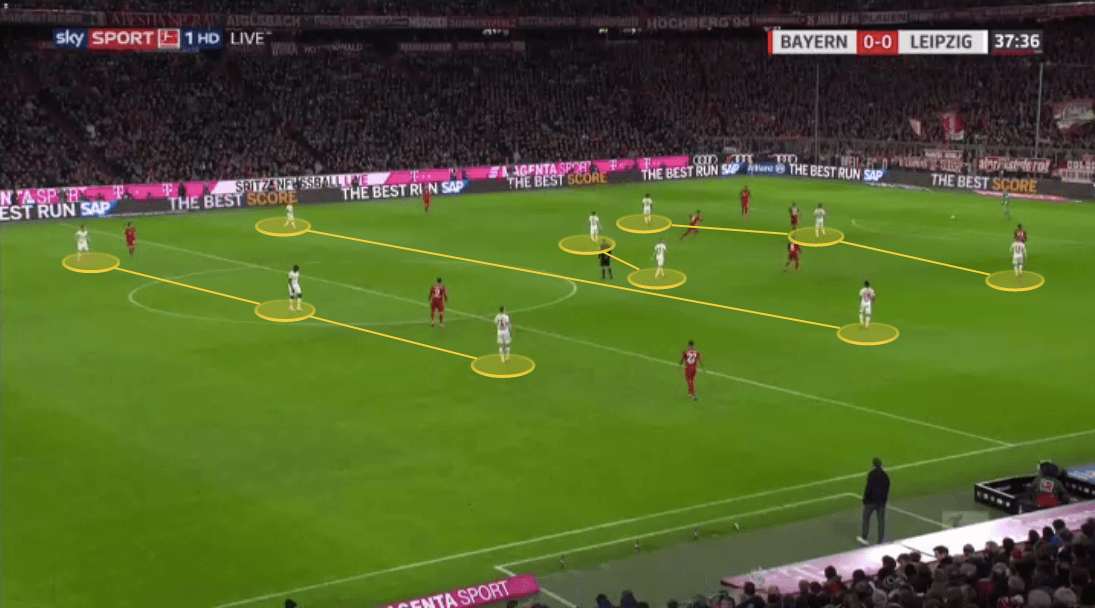 It worked well in frustrating the opposition, and although Bayern did fashion chances, they managed just six shots from a total of 51 attacks. To put this in context, Leipzig managed seven shots from just 27 attacks. As the game wore on Leipzig’s defence grew stronger, and Bayern managed just a 0.17 xG in the second half, despite a first-half xG of 1.63, despite actually having more possession in the second half than they did in the first.

Adams had a particularly important role for Leipzig throughout the afternoon. Adams would drift into a high wing-back position, or come inside to create midfield three with Konrad Laimer and Marcel Sabitzer as we can see in the image below. 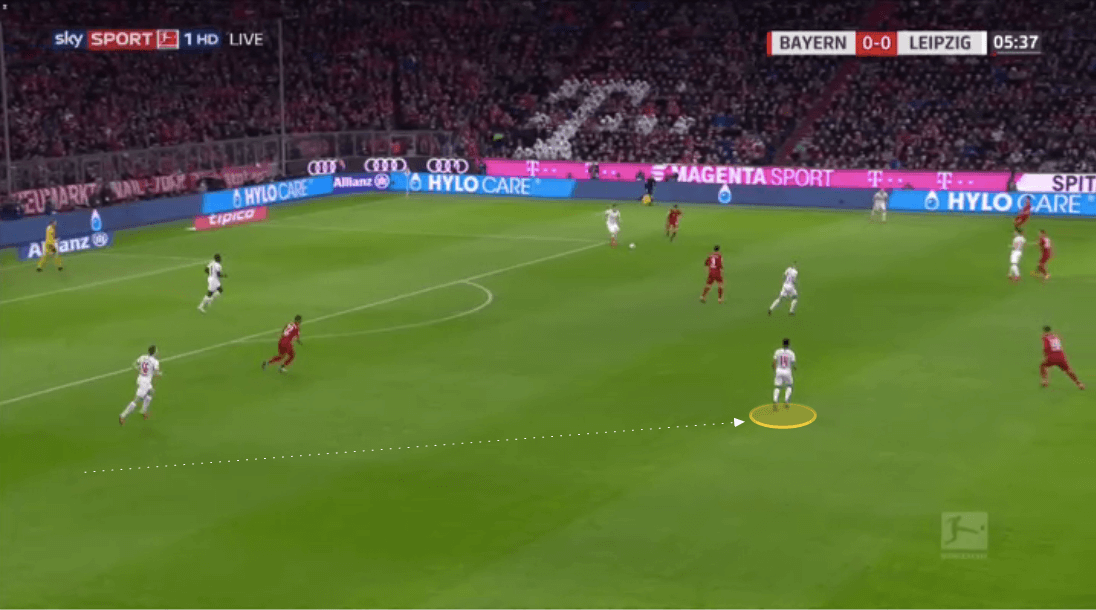 Defensively though, his role was to stop Bayern’s Alphonso Davies. Davies has been a revelation since being used at left-back, and his pace, and dribbling ability, topped with his talent for driving crosses across the opposition defence make him a real handful. Nagelsmann had clearly singled him out as a threat Leipzig had to nullify were they to get a result.

Adams was quick to drop back into the back five in defensive transition, to protect his central defensive three, however, should Davies look to receive the ball when Bayern played out from the back he would rapidly look to press, to prevent Davies from having space to bring the ball forward as the image below shows. 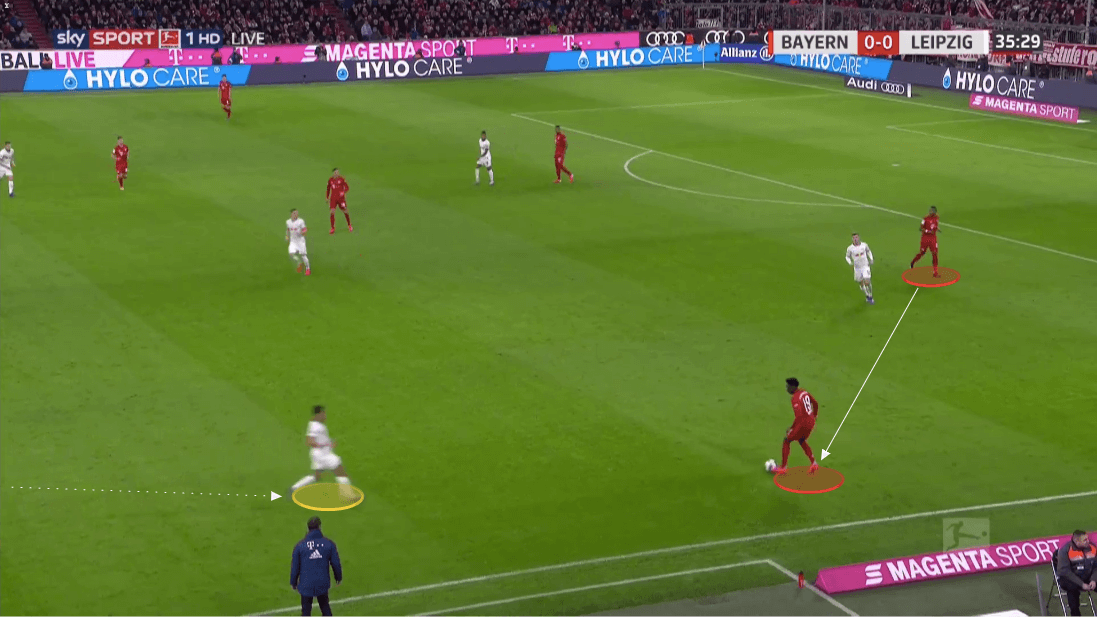 Although on the team line-ups it shows Olmo as a lone forward, this wasn’t quite the case again. Nkunku, Olmo, and Werner were all pretty flexible in their positioning and rotated frequently throughout the game; however, generally speaking, Werner looked to operate on his favoured left-hand side. In fact, there was plenty of rotation across the pitch when they were in possession, even with the aforementioned Adams, drifting forwards, whilst Werner dropped deep looking for possession, as the image below demonstrates. 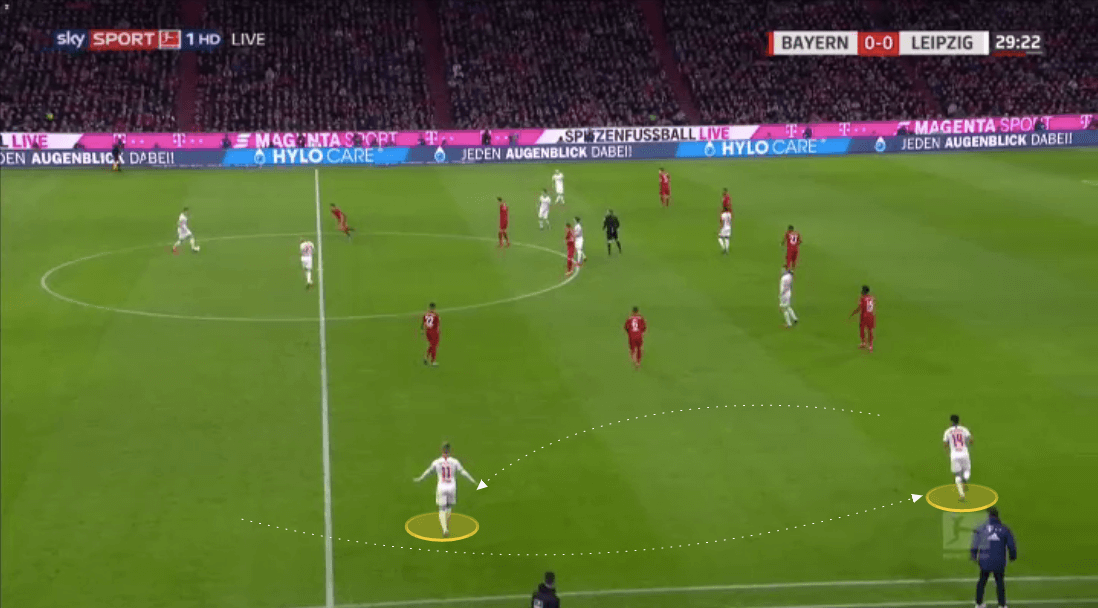 When operating from the left-side Werner chose to remain wide and let Leipzig play across the centre of Bayern’s defence. In doing so, it naturally brought Bayern’s defence more narrow, and once the ball was worked wide to Werner he had the time and space to take on the shot. In the image below, Leipzig have done just that as Werner lingers on the left-side of the edge of the box waiting for the pass. 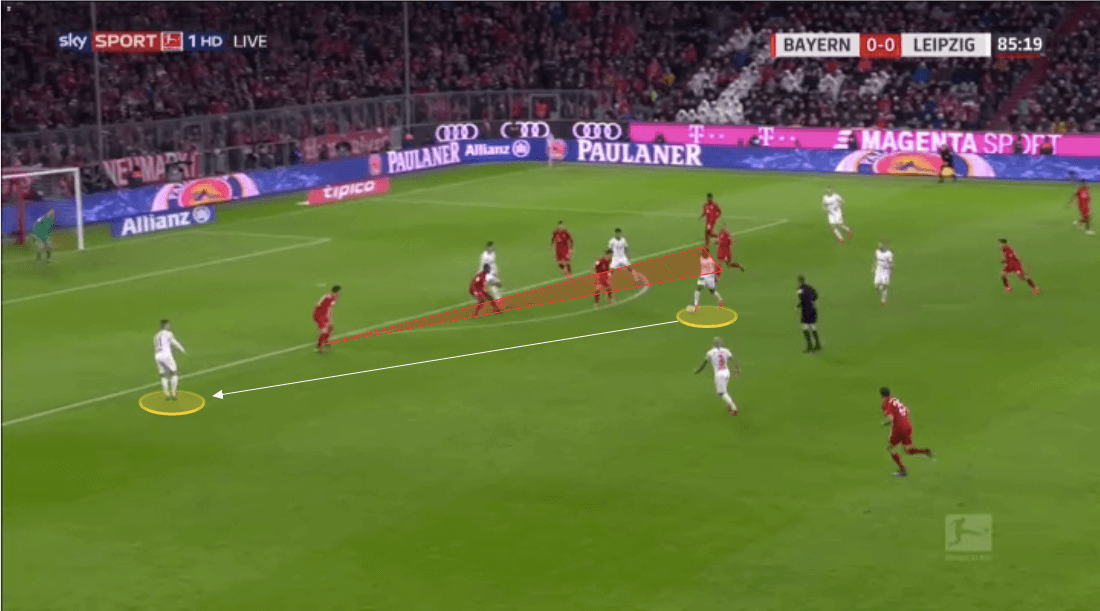 After winning the ball back in defence, Leipzig looked to launch direct counter-attacks as quickly as possible. Nkunku, in particular, was the outlet whom they looked to release in the space between Bayern’s backline and Manuel Neuer. In fact, such was Leipzig’s commitment to using this method of attack that 25% of their overall passes on the day were long passes, which would go some way to explaining their way below-par overall passing percentage of 71%.

By looking at the chart below we can see that Leipzig had only 13 less possession than Bayern over the game, however, were in possession for 20 minutes less than their opposition. This demonstrates how quickly Leipzig looked to play compared to the hosts, who in fact managed six possessions that lasted longer than 45 seconds.

However, it was effective, and Leipzig’s best chance of the game came from such a pass, where Nkunku slipped in Werner who was free in the box, however, the young German forward couldn’t keep his composure and missed the target altogether. With the form he has been in this season, it was certainly a surprise to see him squander such a chance.

The image below shows Nkunku latching onto the long pass whilst Werner arrives at the top of the picture. 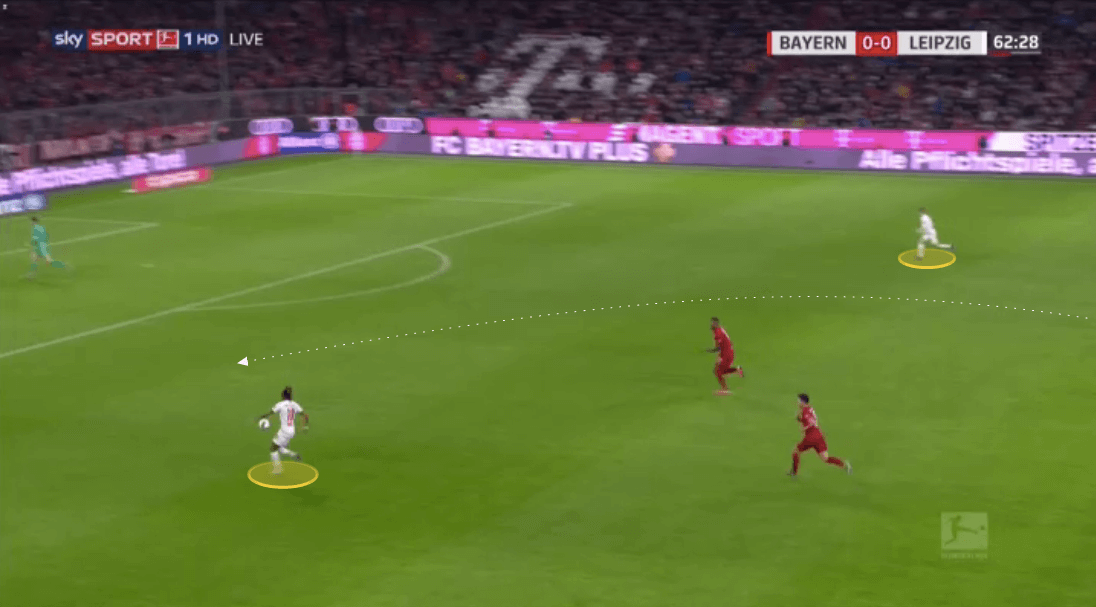 Bayern dominated in the first half, and will rue not taking their chances, however, as the second half progressed, Leipzig found their footing, and they themselves should have put the game to bed. The xG chart from the game backs this up.

The majority of their attacks came from wide areas, with the likes of Davies, Müller, Pavard and Serge Gnabry looking to get behind their wing-backs and pull the ball back or hit crosses across the Leipzig six-yard box. This was particularly effective in the first half, an Bayern would have been disappointed not to score from one of the chances created from these crosses. 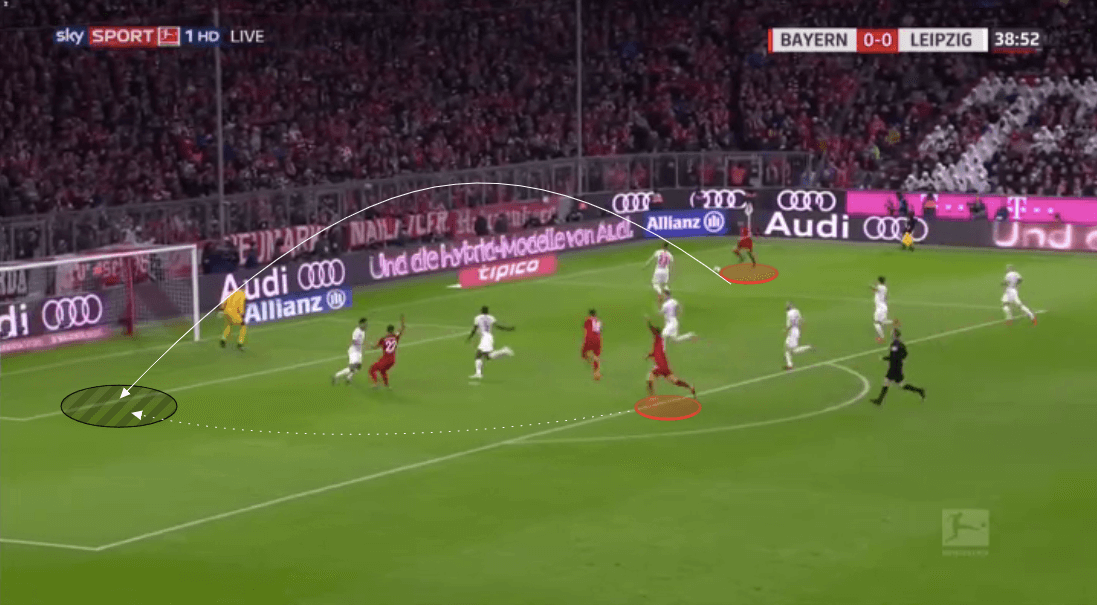 This wouldn’t have been a surprise for Leipzig, as Bayern are the highest crossing side in the league.

As mentioned earlier, Davies was identified as a threat, and he lived up to that billing. When in possession in advanced areas, he is excellent taking on the defender on the outside and hitting fast-paced balls across the box for Lewandowski, like in the image below, and if Bayern were going to score it looked likely that Davies might have something to do with it. 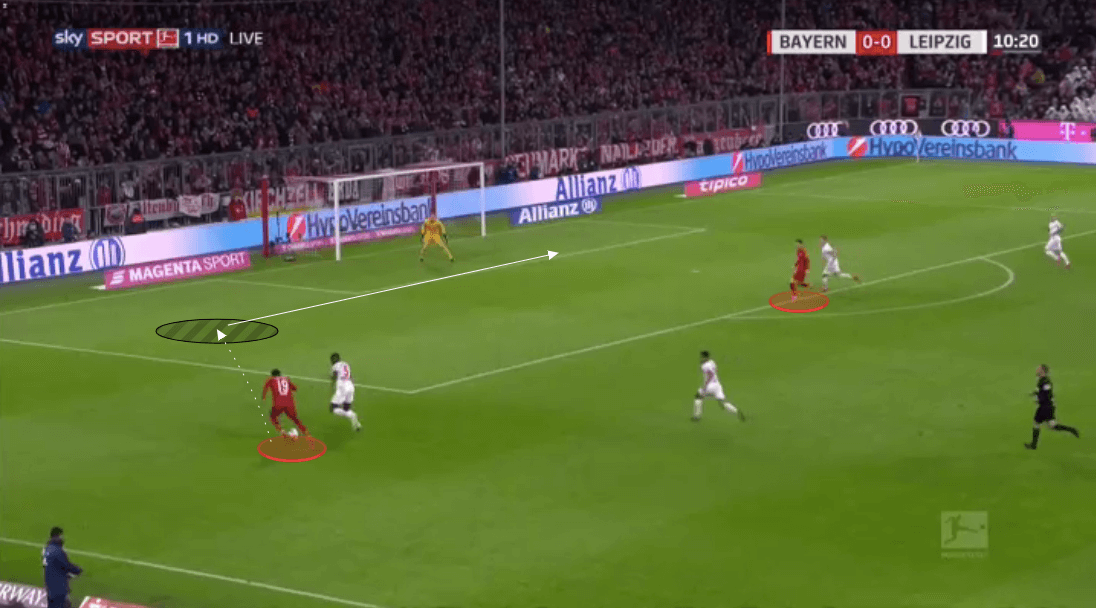 In the second half, Bayern’s ability to penetrate wider areas waned and they instead looked to cut through the middle. Thiago of course was the centre of all of this. He looked to squeeze the pass through to either Lewandowski or Müller, however, despite such passes as the one below, he wasn’t able to have the impact he has had in the previous few weeks in the attacking third. 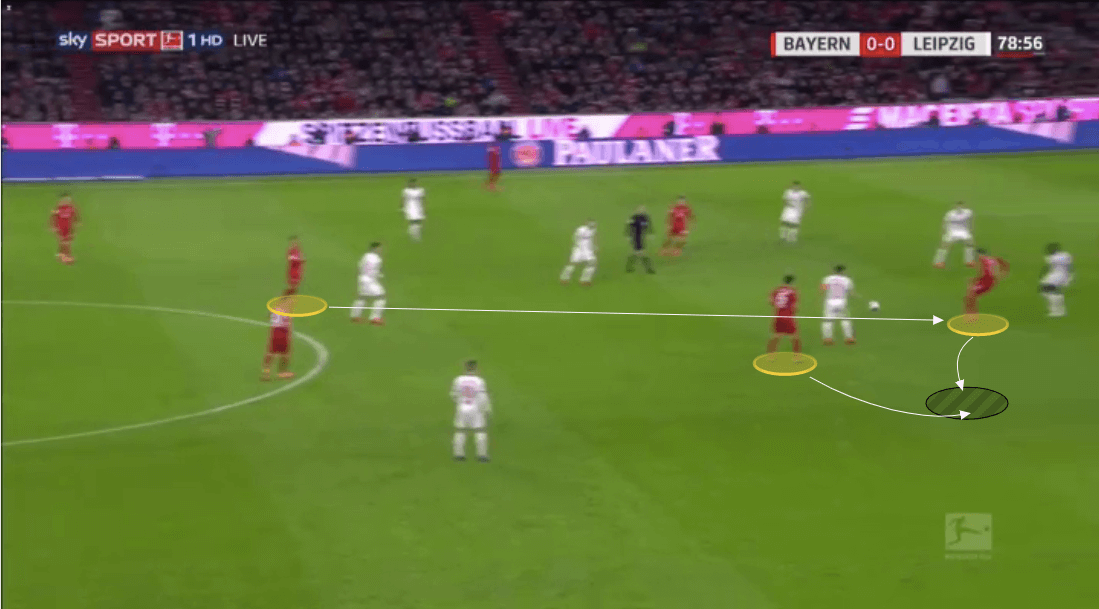 Despite sharing the points, this is a far better result for Leipzig than it is for Bayern Munich. However, it is an even better result for Borussia Mönchengladbach, who could have seen themselves drift six points away from the top of the table this weekend, and Borussia Dortmund, who themselves stumbled against Bayer Leverkusen.

Flick will know that Bayern should have scored when they were dominant in the first half, and had they done so, this may well have changed the course of the rest of the game. Yet Leipzig remained solid and continued to deny Bayern Munich, and in the second half should have taken their chances, with Werner having an uncharacteristically poor day in front of goal. The title race continues to remain in the balance, and any draw or less going forward now from the top four could now well see them drop out of the race. 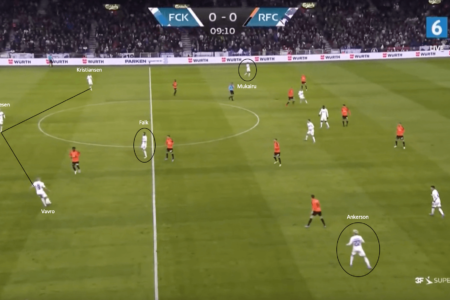 Jess Thorup at FC København 2021/22: The Danish manager on course to lead the Lions to title triumph – tactical analysis

“It took something completely extraordinary to tempt me to a new challenge right now, but the opportunity to become head […] 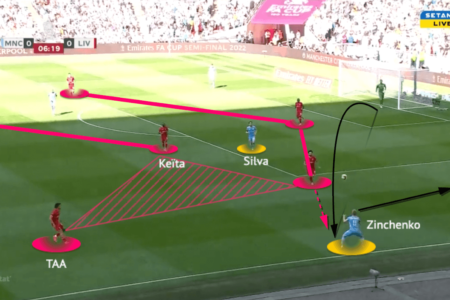