The playoffs for Chinese Super League have begun. Shanghai Shenhua and Shanghai SIPG encounter in the first round. Shanghai SIPG is a competent contender for the champion with some good domestic and foreign players in the team. However, this match ended up with a draw and the second leg will eventually determine who will go to the next round in the playoffs. 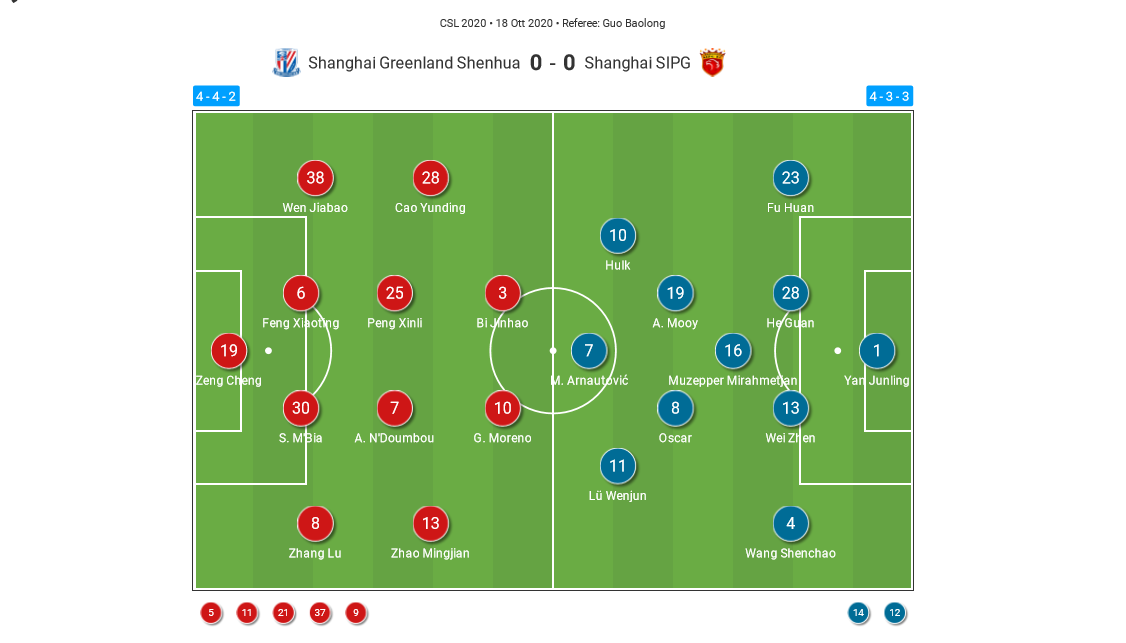 Acknowledging that Shanghai SIPG have loads of skilful players with the likes of Hulk and former Chelsea player Oscar, Shenhua held themselves in a low position and decided to work more on defence. They waited for SIPG to make mistakes in attack and then tried to take them in offensive transition, though SIPG in this match completely controlled the game and didn’t have many mistakes.

Thus, with the intention of preventing the ball played to skilful players and forcing mistakes, Shenhua tended to cut off the link from the back to midfielder players and front players. They adopted a man-oriented approach with a 1-4-4-2 mid-block, without much engagement on the ball but with traps.

They left SIPG’s centre-backs to possess the ball unpressed and marked key players like Oscar and Mooy in a good distance. The distance of marking instigated SIPG’s centre-backs to take the risk and pass forwards. Then if SIPG’s centre-backs decided to pick a forward passing option that faced backwards, the pressure would come from the back to prevent turning and SIPG’s players into the trap. Shenhua’s pressing players from behind on this occasion would ideally poke the ball and dispossessed the opponent as their distance was close enough. Also, this would also trigger a doubling-up if there were teammates nearby and they would go and challenge the ball. This was the trap Shenhua utilised. If the ball wasn’t poked or recovered, it would also force the opponent to play back to the centre-backs. Centre-backs then might play long if they lost patience. In this way, Shenhua anticipated SIPG’s centre-backs or midfield players who couldn’t turn to commit mistakes in this stage.

The above is an example of their trap. Every SIPG’s players in the frame were tightly marked. Oscar was marked in an appropriate distance and this encouraged the centre-back to pick him. Oscar in this case ran towards the ball but he couldn’t turn. Also, with the pressure in his back, his touch was a bit heavy and this triggered Shenhua’s striker Bi Jinhao to double-up, whereas Oscar was one step quicker to poke the ball back to the dropping pivot Mirahmetijan.

As Mirahmetijan received the ball, he spotted Mooy who seemed to be a free player with his marker a bit far from him. However, as Mirahmetijan hit the pass, this triggered the press from Peng Xinli, who wanted to surprise Mooy if he turned. Mooy scanned the run of Peng and passed back again to escape the pressure. Eventually in this attack SIPG hit long and lost their patience.

As the defensive tactics of Shenhua were more man-oriented, space would be conceded for SIPG to exploit. Also, it was concentration consuming for Shenhua to execute such tactics as they were out of possession for most of the time (31%-69%). In this case, the off-the-ball movement was crucial for SIPG to break through the marking and they succeeded in doing so.

Oscar was the one who contributed a lot in breaking the marking mid-block of Shenhua. As he was deployed more on the left-flank in a 1-4-2-3-1 system, he was often tracked by the opposition right-back. In the first/second phase of the attack, he would drop into the midfield, attracting the Shenhua’s right-back to follow, freeing the left flank for the left-back Wang Shenchao to exploit. He would also serve as a link player to find the pivot in this stage, letting pivot to start the attack finding Wang Shenchao. 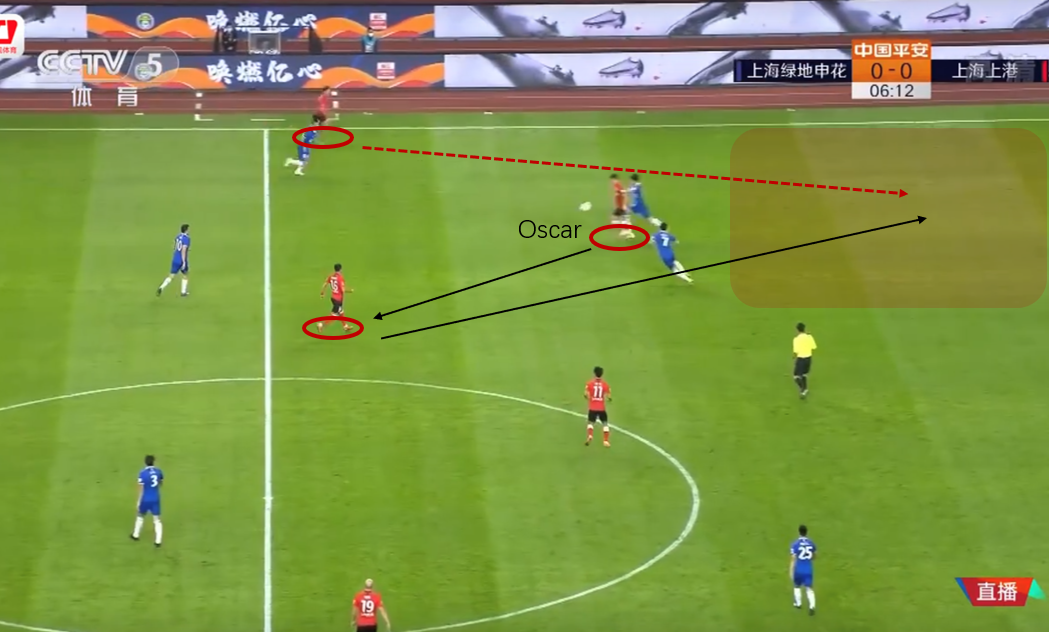 Above is an example of Oscar’s movement bringing the play forwards. Oscar ran towards the ball facing backwards, pulling the opposition right-back out. Space was then created by this movement as manifested on the image. Then Oscar latched onto the ball, picking the pivot Mirahmetijan who was unmarked due to the lack of concentration of the opponent in this scenario. Mirahmetijan hit the ball with one touch, finding Wang who was running towards the space that Oscar created. A final pass was then created.

While pulling the defenders out and attacking the space behind is one of the manipulations to the man-oriented approach, pulling the central-midfielders horizontally is also a good choice. Two pivots of SIPG were matched up and tracked by two central midfielders in 1-4-4-2 of Shenhua. Hence, two pivots would drop to the defensive line together, stretching to the flank/ half-space to form a back-four, with two full-backs pushing to provide height. On this occasion, the central channel and the space between lines could be cleared. Front players then could utilise this space with their well-timed runs and turn. Ideally, they would face only one line of defence and this was under their manipulation. 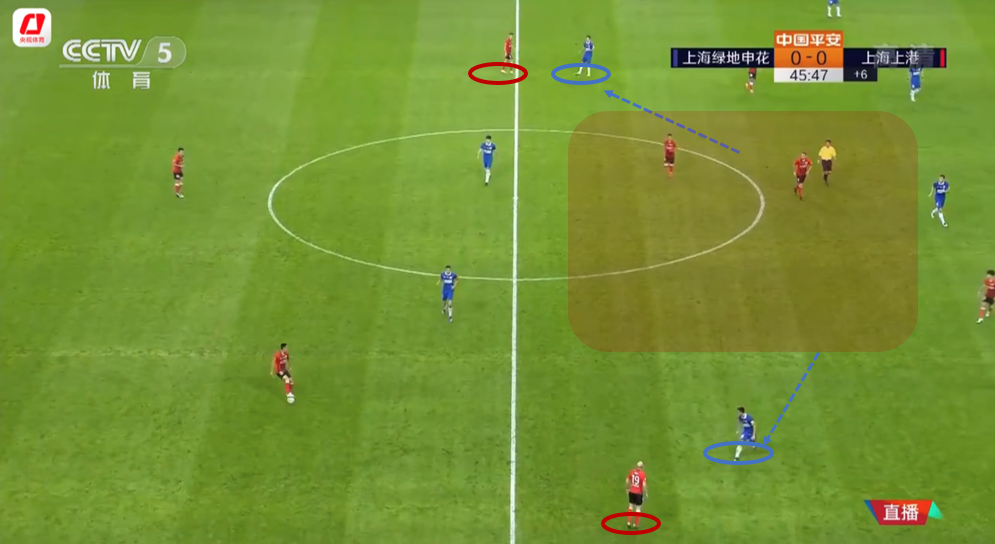 As you can see from above, Mooy dropped to the right flank, incurring the central midfielder Peng to track. Oscar rotated as the other pivot, enticing the other central midfielder Alexander to mark. The space between lines was created and it was huge. Though SIPG didn’t succeed in this attack, but if the first line was bypassed, it would be a disaster for Shenhua to defend with only one flat line of defence.

On top of this, some simple rotations could also create a positional advantage as it would confuse the defenders on whom to mark. Shenhua’s players could also lose concentration under man-marking tactics.

The above scenario was an illustration of a simple rotation. Wang Shenchao was the left-back and Lü Wenjun played as a front player. On this occasion, Lv dropped to operate the play and Wang went up the field invertedly to occupy Lü Wenjun’s initial place. As they switched their position, the marker of Wang lost concentration and didn’t track him well. Wang, therefore, had the positional advantage to receive the ball facing forwards with one touch, though his next move didn’t bring the play into the next stage.

Also, Hulk was strong in the physique. His acceleration was fabulous and possessed skills to beat the opponent in 1v1. Therefore, SIPG would use of the concept of isolation on the flank to create 1v1 scenario for Hulk on the right flank. This would be achieved by clustering the pivots and four-back in the back, manipulating the man-marking approach of Shenhua. As Shenhua’s players all pushed and marked, isolation in the front line would be created and 1v1 scenario for Hulk can be created. This was the trigger for the ball-carrier to hit long to pick Hulk on the right. Then Hulk could go inside to shoot or outside to create finishing chances. 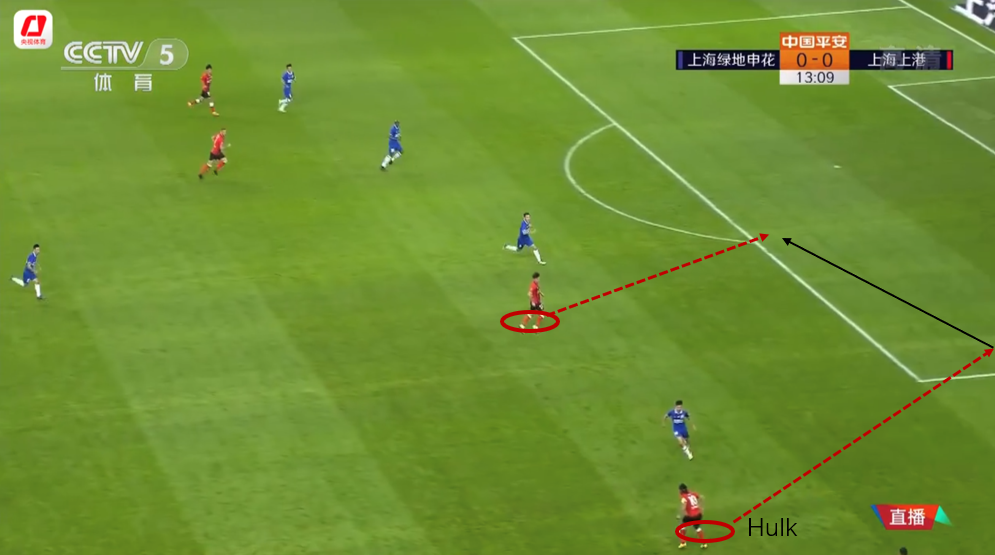 In the above image, the isolation was created in front on the right for Hulk. Then Hulk was picked from the back. In this 1v1 scenario, he accelerated diagonally towards inside and beat the opponent and the covering player was too late to arrive. He then played a cut-back pass to Fu Huan, who was in an opening to finish in the box.

Though SIPG succeeded in breaking through the block manipulating Shenhua’s defensive approach, they didn’t score a goal in this match. They had 17 shots (4 on target) with some shots of high quality in good locations as the image manifested below. They wasted some chances and particularly a good opportunity from Wang Shenchao. Their xG for this match was 1.85. 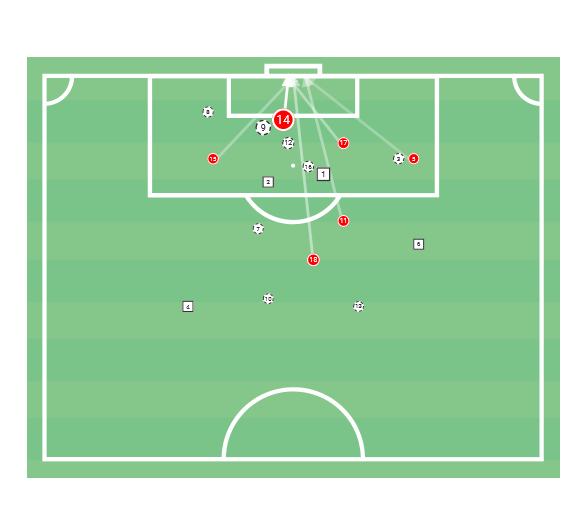 In addition to not taking the chances they created, another problem might seem to be the creation of the final pass. In this case, Hulk would often receive in the centre/ half-space in front of the opponent’s midfield line and served as the link to the final pass. However, his passes were not very effective in this stage as he would pick the weak foot of his teammates or the weight of the pass was not good enough. Sometimes former English Premier League and Internazionale player would take Hulk’s place but he possessed the same problem.

As you can see from above Hulk received the ball in front of the opponent’s midfield line. He decided to pick Oscar who was able to hit the ball forwards in the case. However, Hulk hit an errant pass and the opponent intercepted the ball. He, therefore, wasted the chance for final pass creation.

Shanghai SIPG was more dominative in this game, however, the wasting of chances and the variation in final passes weren’t enough. It’s intriguing to see how these teams will adjust their tactics in the second leg.