Leeds United looked to continue their daring start to their newly-promoted Premier League campaign as they hosted the equally ambitious Wolves on Monday. The West Yorkshire club gave defending league champions Liverpool a fitting challenge in their opening match of the season, and since then have won twice and drawn against Manchester City. The Wanderers meanwhile have also won twice, but also lost to Manchester City and West Ham. This tactical analysis will examine how Leeds looked to attack the Wolves defence and how the visitors overcame that attack and took three points from Elland Road. 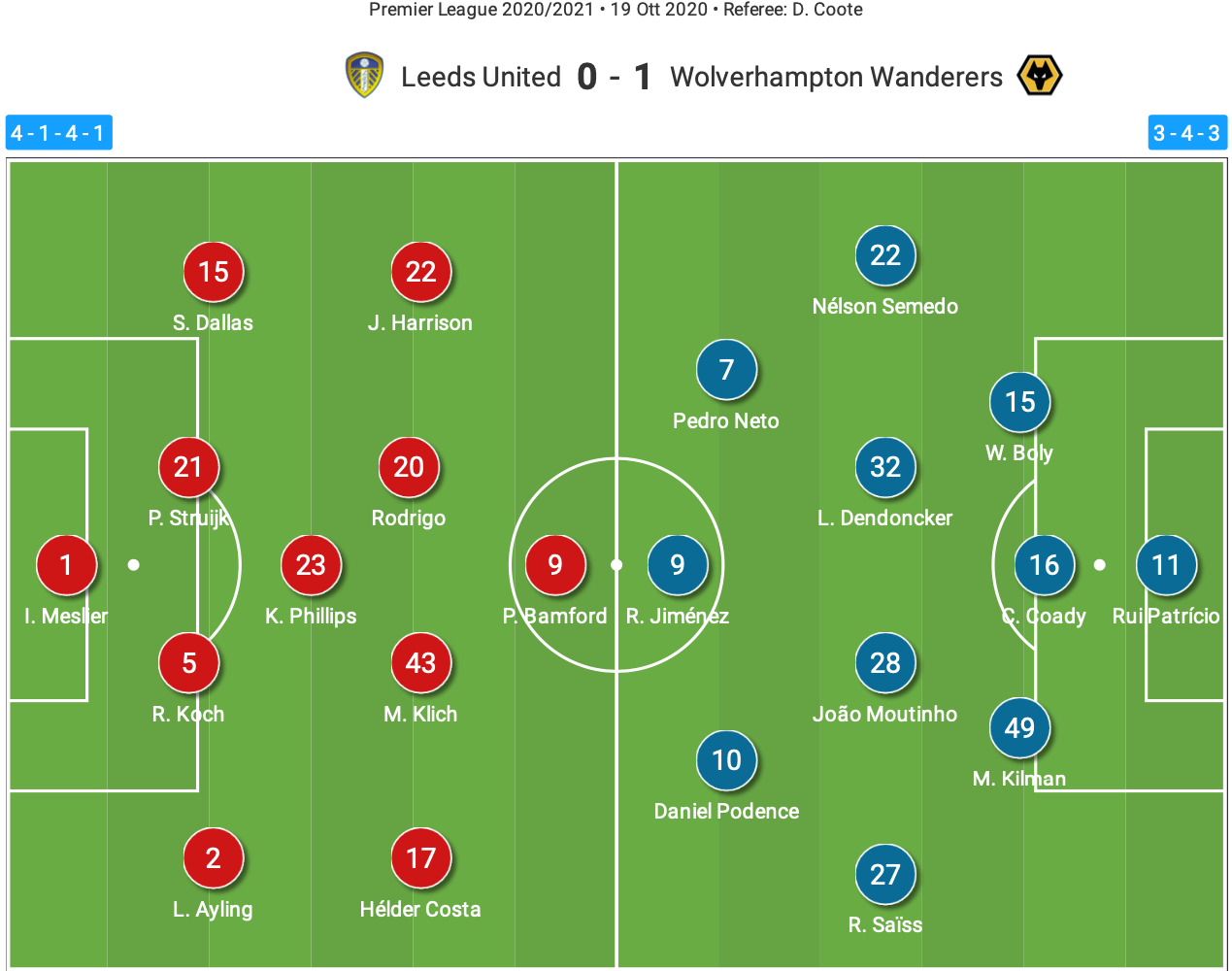 Leeds manager Marcelo Bielsa sent out an attack-minded starting group. While the back four and Kalvin Phillips were the more predictable side of the lineup, the Argentine started striker Rodrigo in midfield alongside Mateusz Klich, with Hélder Costa, Patrick Bamford, and Jack Harrison filling out the rest forward lines.

Wolves manager Nuno Espírito Santo started his common back three/back five setup, albeit with a couple of tweaks. The three centre-backs Willy Boly, Conor Coady, and Max Kilman played alongside the two wing-backs when out of possession in newcomer Nélson Semedo and Romain Saïss. Adama Traoré began the match on the bench, as Nuno went with a front three of Pedro Neto, Raul Jiménez, and Daniel Podence.

Leeds’ rapid attack looked to access space down the wide areas of the final third, using aggressive combinations to pull out defenders and open up space around and behind the opposing back line. In the example below, Costa connects with Luke Ayling after moving into space between Wolves’ defensive lines thanks to Ayling’s pull of the left wing-back. Costa then combines with Rodrigo, who has pushed forward down the half-space to freeze the left centre-back, thus creating space behind the back line for Costa to complete the one-two and obtain the ball in the box. 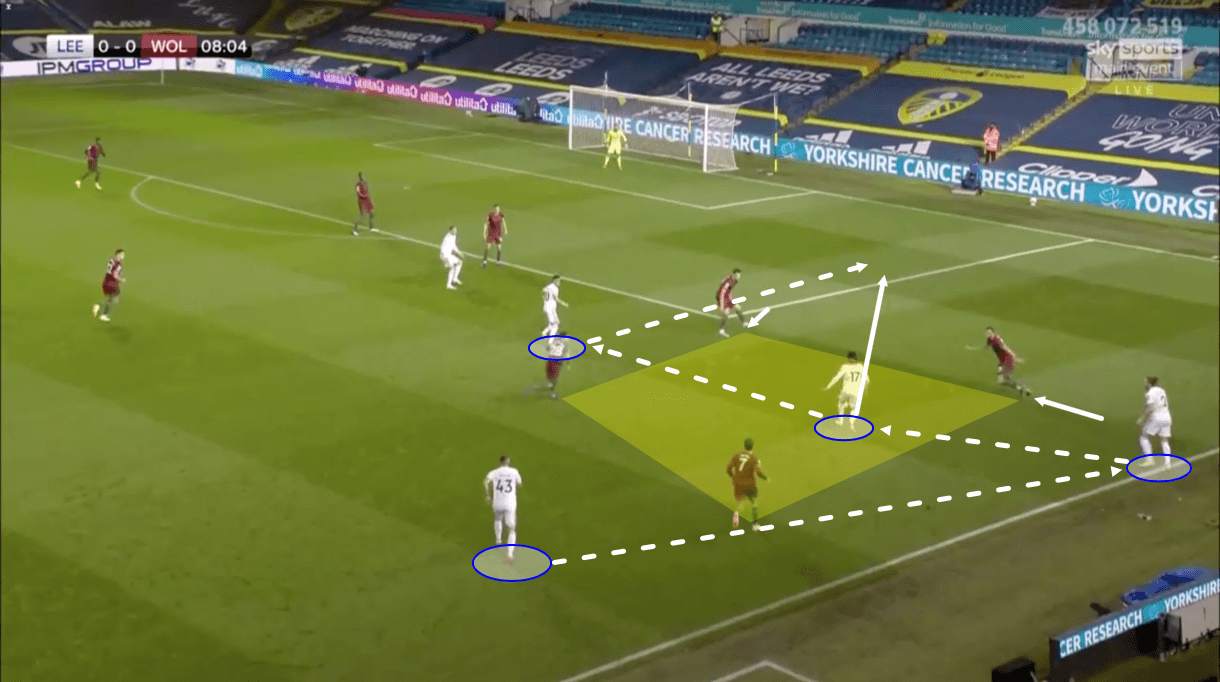 Accessing the space in Wolves’ box was, predictably, hard to come by, as Wolves’ reputation precedes them. That in mind, Leeds focused on creating opportunities directly from the wide areas rather than pushing the ball on the ground into the central spaces. The image below shows the host’s attackers attempting to free up space for a chance to be created. As three attackers shift inside, the lone remaining teammate in the wide area can receive the aerial pass in space. 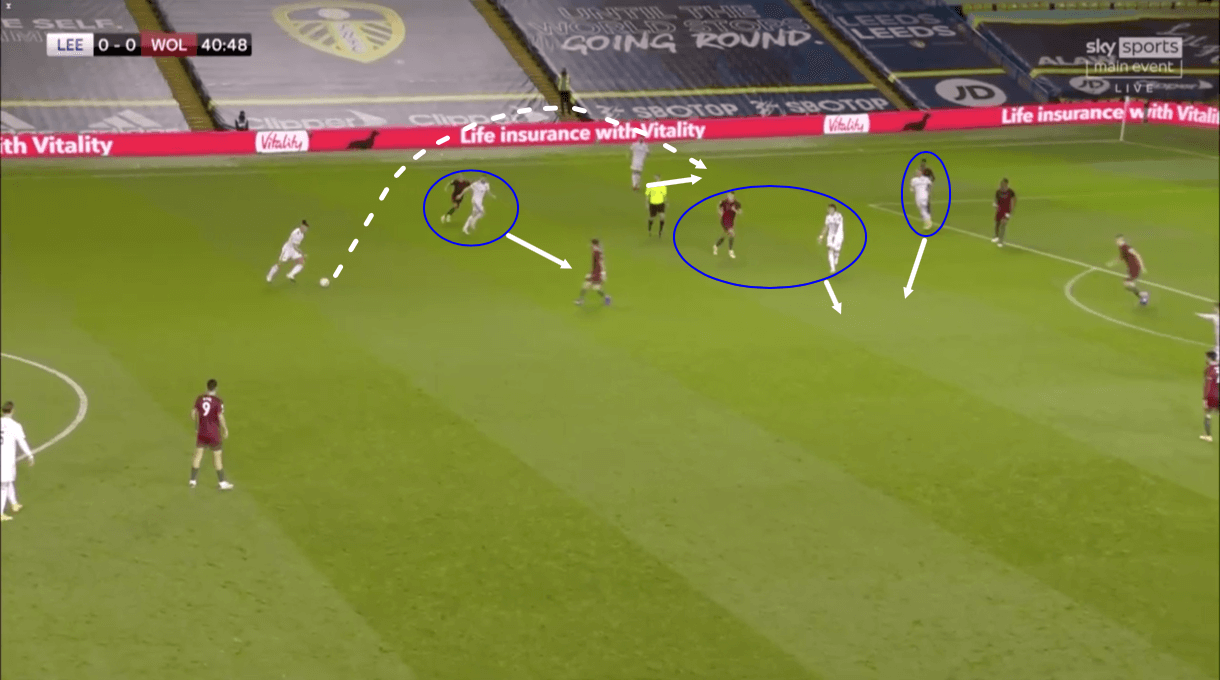 However, even this largely proved fruitless for Leeds. Wolves’ smooth transitions into a back five defensive line meant the wing-backs were never too far away from the wide areas, should they need to apply pressure in said area.

The only real moments in which Leeds found opportunities on target were after completing quick switches of play. Occasionally, the far side of Wolves’ defensive block failed to scan behind them frequently enough. 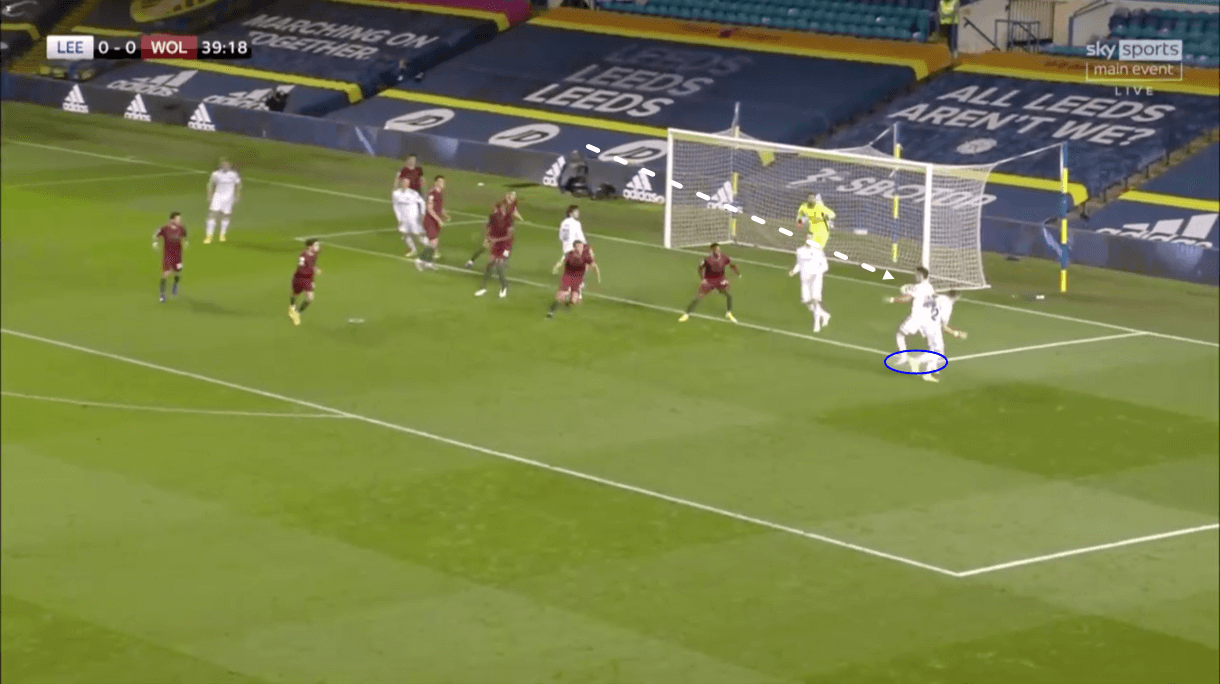 Above, on a corner kick, Wolves defence didn’t account for the far post, and Rodrigo received the ball in space. Fortunately for the West Midlands side, his shot was well saved by keeper Rui Patrício. Even Leeds’ sudden switches of play were fended off, often by Wolves’ central defenders in impressive individual actions.

Wolves have a strong reputation when it comes to their defensive structure and discipline. Nuno is renowned for sticking with this system and teaching it well. This match was no different. The below image displays Wolves’ defensive block, including showing the width the back line can cover. 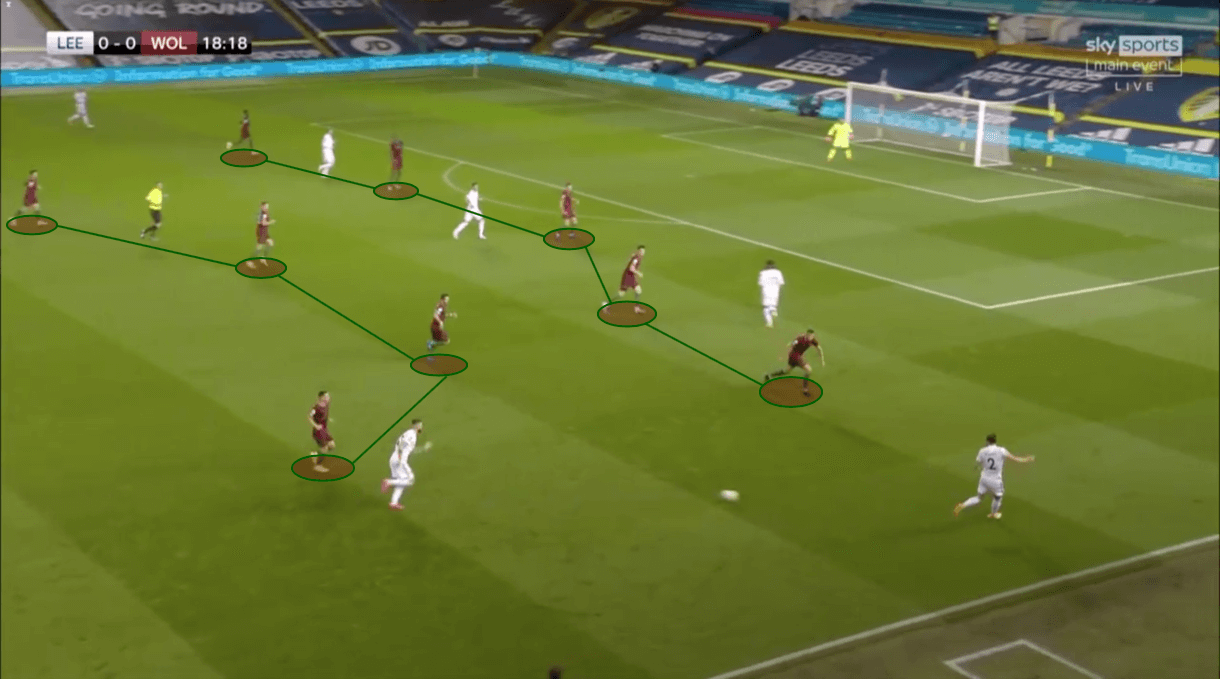 When Leeds gained possession in the wide area, pressure was placed on the ball. This forced the defender to either pass backwards and recycle possession or attempt a quick pass into the box. The figure here shows Wolves were well prepared on the latter. Using zonal marking tactics on this defensive manoeuvre, the ball-side centre-backs refrained from tracking their markers and instead focused on defending the arriving player. This resulted in Leeds exiting the box and recycling possession. Eventually, Wolves’ defensive organisation along with Leeds’ typically aggressive positioning helped lead to the lone goal of the match. Below, as Ayling attempts a diagonal pass towards the box while under pressure, Kilman steps forward and intercepts. The middle area in Wolves’ defensive half has virtually zero Leeds players to counterpress, giving Kilman and the Wolves midfielders time and space to progress the ball and begin an attack. 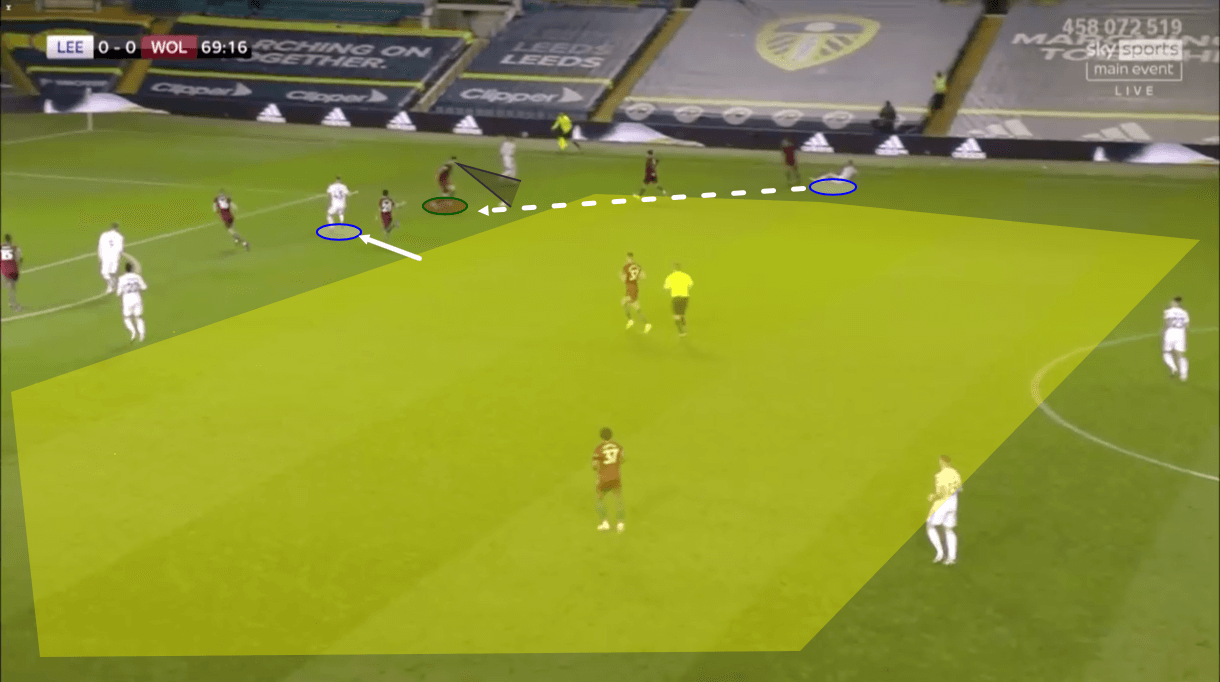 Often when a team prioritises defending in a low block they attack swiftly while utilising long balls and fast runners. Wolves’ passmap below epitomises this directness of Nuno’s instruction. The passing combination of Boly and Jiménez- from centre-back to striker- was the most frequent connection for the side. The two teammates often connected when Jiménez dropped back into the half-space to aid in swift buildup. 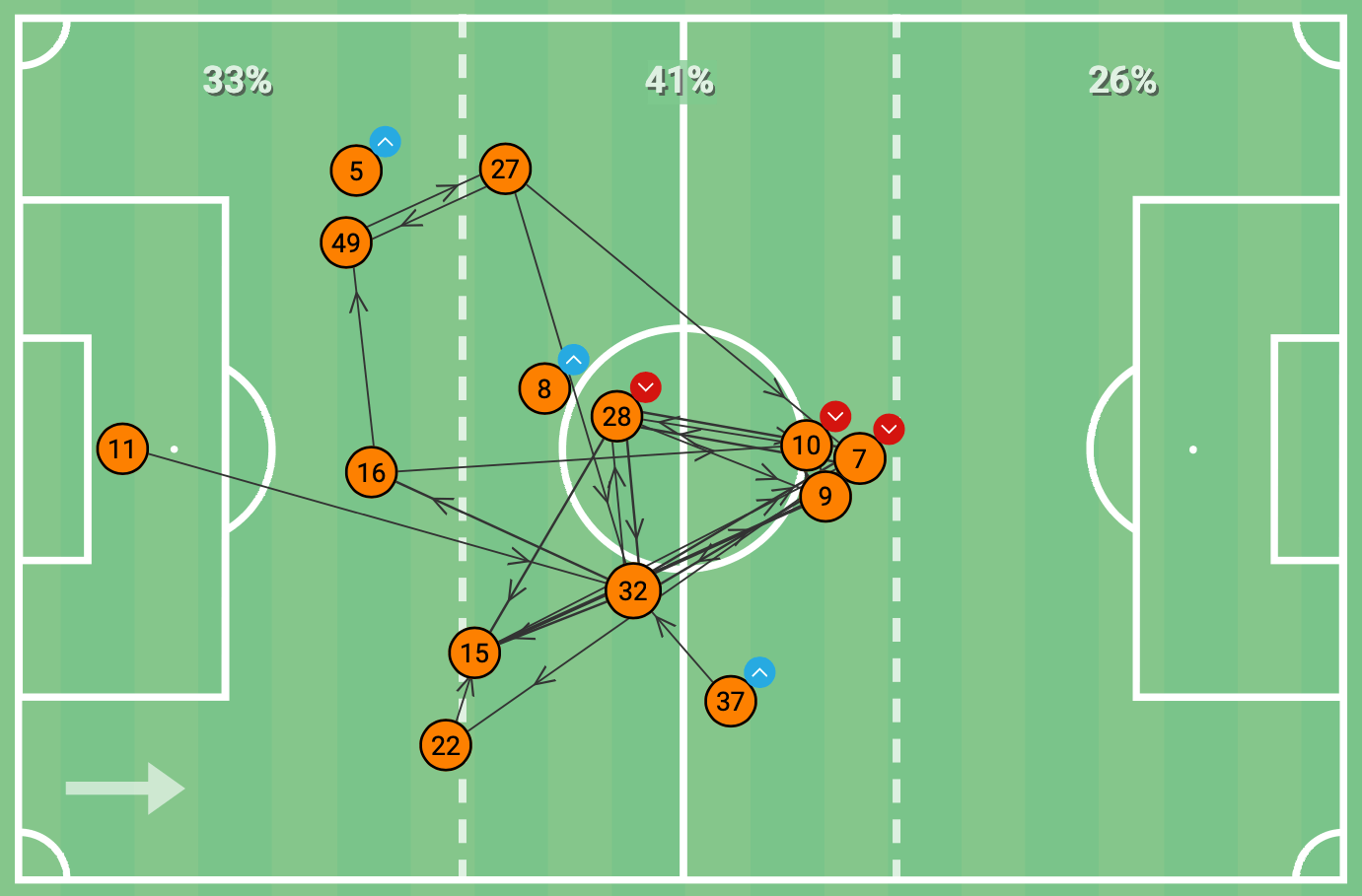 This movement however also helps explain the limited number of opportunities seen by Wolves. They often struggled to progress the ball into the final third, in large part due to the strayed average positioning of the forwards. In this image, Jiménez drops down to receive the pass from Boly. This opens up space the striker previously occupied, but there is no additional attacker there to occupy it, even after he completes the ensuing pass to Neto. The other key reason behind the limited chances for Wolves was the isolation of Jiménez. When a striker receives the ball and is the only attacker in the attacking half of the pitch, attaining a quality opportunity on goal can be difficult.

Therefore, for most of the second half, Wolves furthered their positioning and possession up the pitch. This not only gave themselves less work to do defensively but also provided Jiménez with support. The Mexican striker utilised this support on the match-winning goal. Even after Bielsa’s pacey players were able to track back successfully and defend the box, the off-the-ball attacking movement by Wolves made zone 14 available for Jiménez to take on his marker 1v1. His on-target shot deflected off a Leeds defender and into the back of the net. 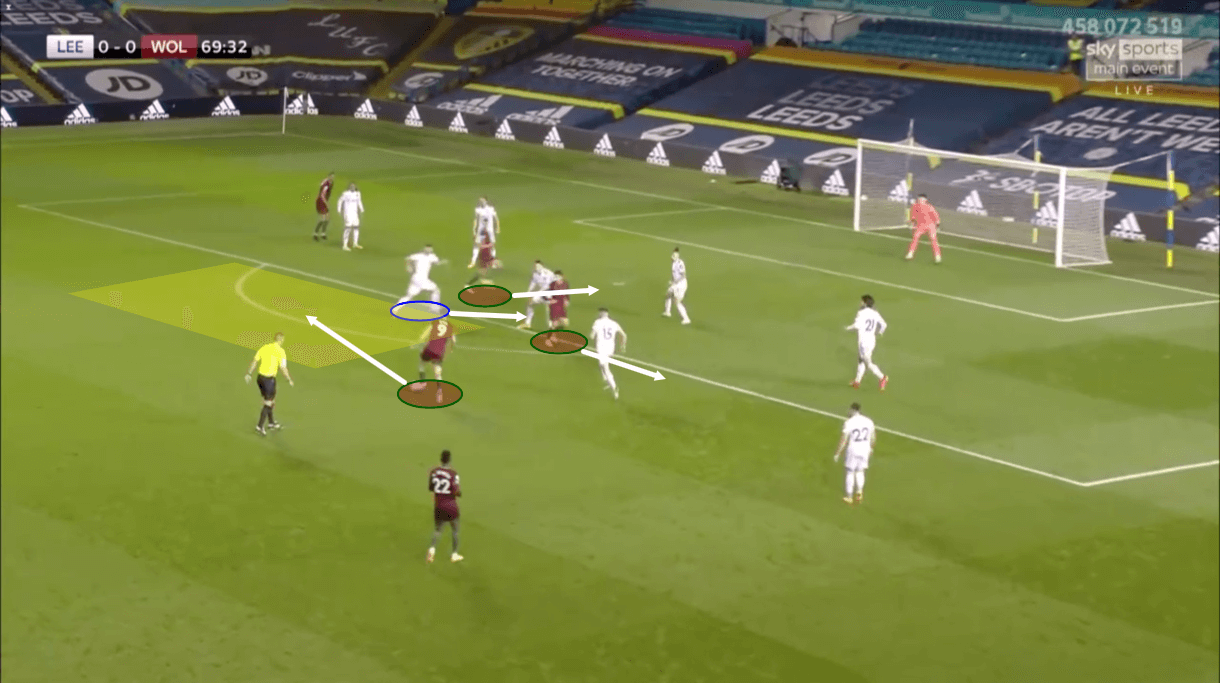 After the goal, Wolves made it even harder on Leeds’ attack as they returned to a more defensively numerous block. The final xG tally of 1.5 to 0.8 in favour of the hosts more so exhibits Wolves’ cautious attacking approach than Leeds’ failure to create.

The madness that is Bielsa’s tactics met a potential kryptonite Monday night. While Leeds were consistently able to drop back defensively when the opposition attempted counter-attacks, Wolves were already organised to defend their own box when the Leeds attack arrived at the other end. A temporary aggressive change in tactics ultimately paid off for Nuno’s side in what proved via analysis to be a defensively stout matchup. Next, Leeds United face an unbeaten Aston Villa side while Wolves host 13th-place Newcastle.