Hoffenheim’s head coach, Sebastian Hoeneß and VfB Stuttgart coach, Pellegrino Matarazzo can surely relate to each other on a managerial level, as both coaches have experienced what each other so far is going through during the 2021/22 Bundesliga campaign.

Hoeneß’s team sat fourth before their Friday night matchup, playing quality football reminiscent of ex-Hoffenheim manager Julian Nagelsmann. By contrast, Matarazzo’s men are near the bottom of the table, fighting for survival. Now the gap between these two teams is quite vast, but, during the previous season, roles were reversed. During the 2021/21 season, Stuttgart were the hotshots of the league, bringing exciting, energetic, and fun football to the German topflight. On the other hand, Hoffenheim was caught in limbo, trying to re-create their form once found in previous managers, while recovering from star players being sold to rivals.

Last season, Hoffenheim finished eleventh, while Bundesliga newcomers finished a respectable ninth place. The fortunes of the clubs going head-to-head have drastically changed, one for the better and one for the worse; Sebastian Hoeneß has been a revelation for Die Kraichgauer, making use of all his experience managing at Bayern Munich‘s youth level. Conversely, Stuttgart has not received the same luck—losing important players because of injury such as left-back Borna Sosa a few days before this fixture, and tricky winger Silas Katompa Mvumpa, who was a major success story from last season.

Hoffenheim will have wanted this game to be a continuation of the good work they have showcased so far this season. Stuttgart hoped it would be the beginning of a revival, to keep them within the top division. When a team fighting for their lives plays away from home, it should be a formality, especially a team of Hoffenheim’s calibre. But football is never as simple as that.

In this tactical analysis, I will delve into the defensive and pressing structures of sides, while discussing Florian Grillitsch’s versatility and usage throughout the match. Last, I will look into the role of Christoph Baumgartner and how his two goals staged a late comeback.

Hoffenheim made use of a 3-5-2 formation: in goal, Oliver Baumann. In the back 3, Stefan Posch, Florian Grillitsch in the middle and Benjamin Hübner, with David Raum and Pavel Kadeřábek at wing-back. Christoph Baumgartner, Dennis Geiger and former Premier League attacker Andrej Kramarić, were stationed in midfield. Just in front in the forward line, with Georginio Rutter and Ihlas Bebou. 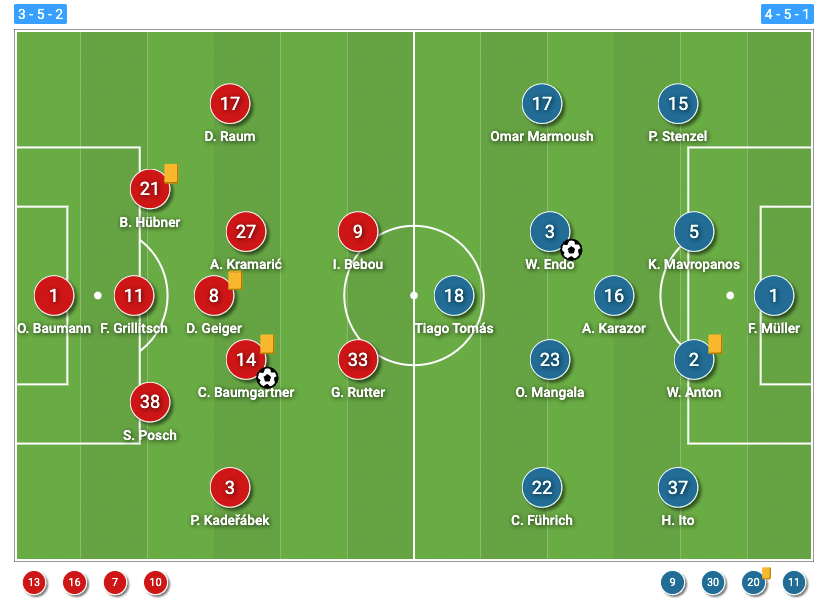 Most spectators would have been surprised as the half-time whistle blew with no goals on the board for both teams. This is because of both Hoffenheim and Stuttgart employing well-drilled defensive strategies, about their defensive transitioning, out of possession shape and pressing tactics. Starting with the home side, Hoffenheim came out of the traps, making use of a 5-3-2 formation, attempting to disrupt Stuttgart’s fluid play within their 4-3-3 formation when in possession. During Stuttgart goal kicks, their full-backs would position themselves moderately wide, still in connection with the backline. Stuttgart’s number eights would push slightly forward, with Atakan Karazor dropping into the sixth space. To counter Stuttgart, Georginio Rutter was tasked to man-mark Atakan Karazor, with Ihlas Bebou pressing both Mavropanos and Waldemar Anton. Both of Hoffenheim’s wide eights within this structure, Andrej Kramaric and Christoph Baumgartner have pressed the opposition full-backs when in possession; when the ball eventually moved to this zone, this would key the ball-side wing-back to press forward and condense the space just ahead. 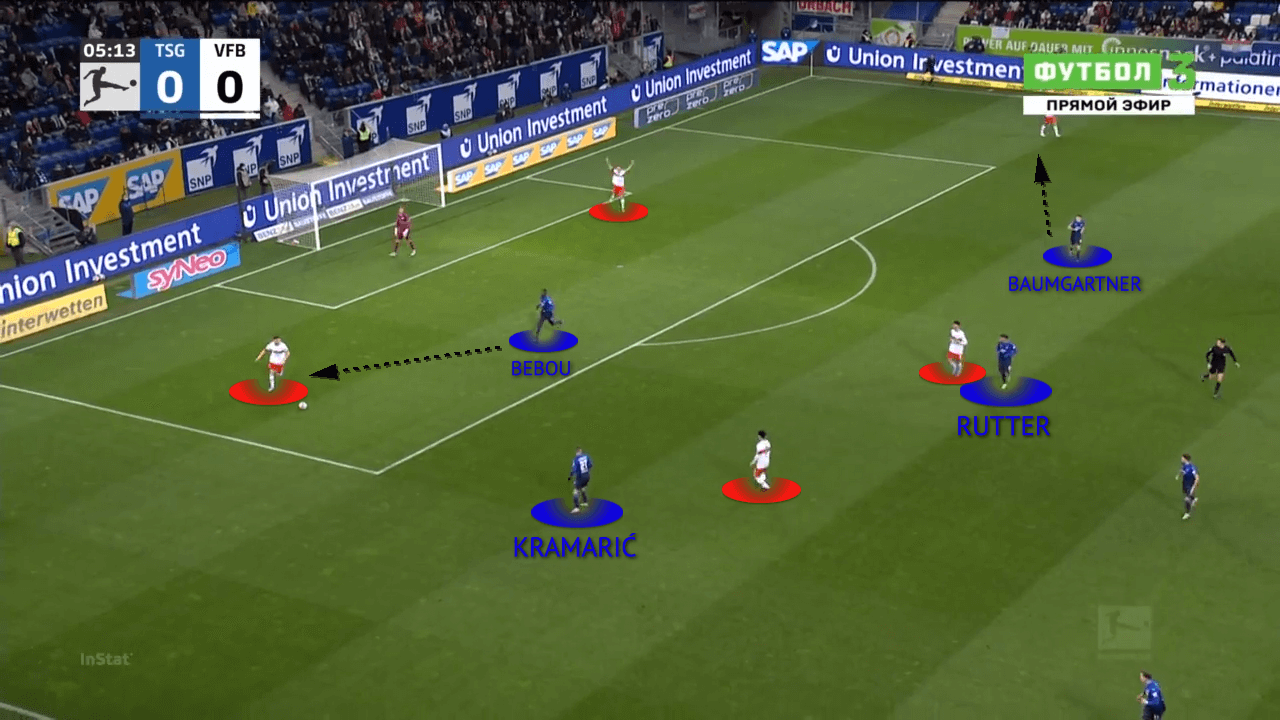 In addition, Dennis Geiger played an important role, as he consistently pivoted during Stuttgart’s first phase, man-marking the opposition’s ball-side central midfielder, eliminating them as a passing option. If their opponents bypass through their initial press, Hoffenheim reverts to a standard 3-5-2/3-4-3 medium block. 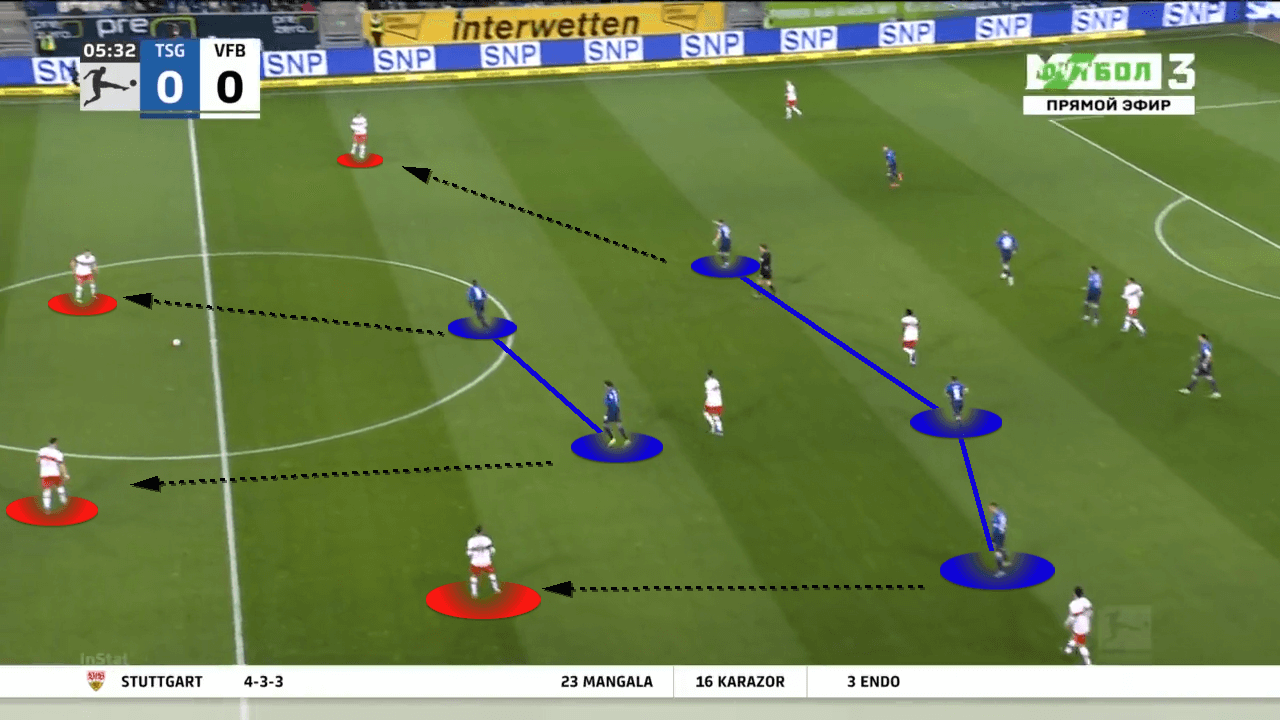 Stuttgart took a slightly different approach, as their defensive scheme was incredibly fluid, depending on the phase of play. During Hoffenheim’s goal-kicks, Stuttgart’s shape begins as a 4-3-3 formation, with Orel Mangala and Omar Marmoush joining Tiago Thomas; with their intentions to press Hoffenehiem’s back three man-for-man, while cancelling out Dennis Geiger as a passing option. Stuttgart’s second phase defensive system made use of a different formation but employed similar principles. 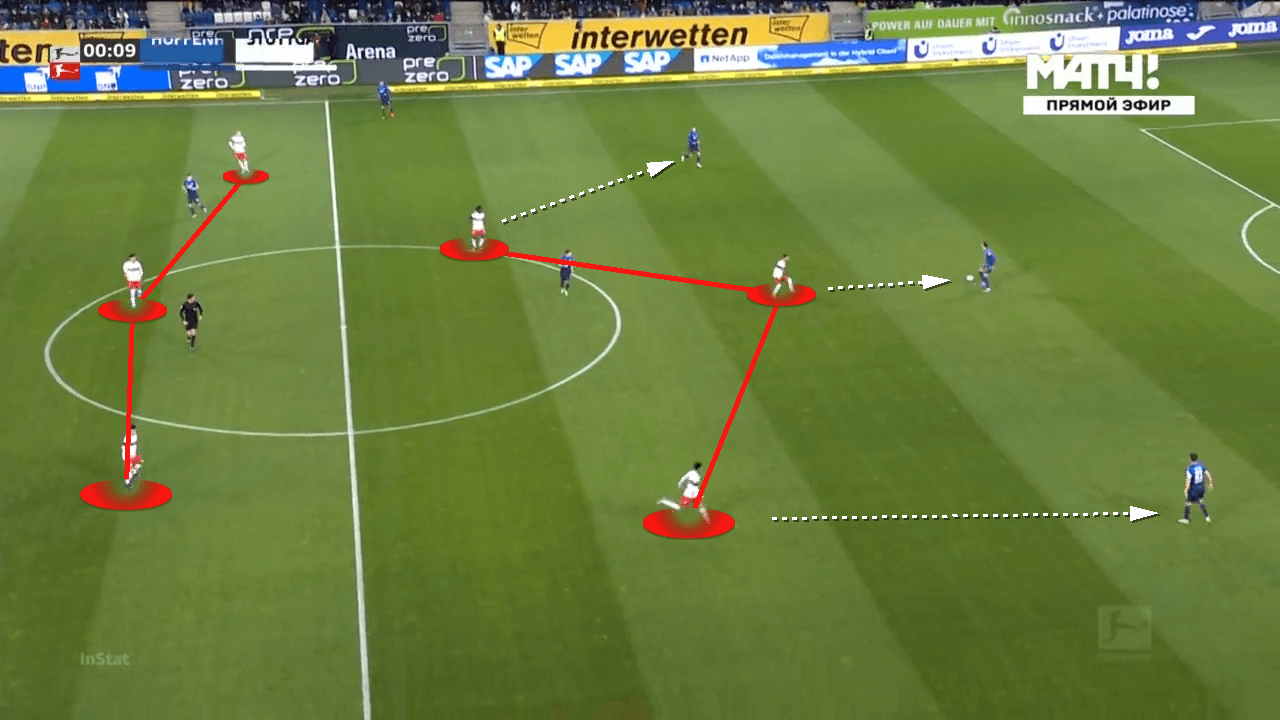 The away sides 4-3-3 would transition into a 4-5-1 Marmoush and Mangala would region the midfield line, while occasionally pressing forward to pressurise Hoffenheim’s wide centre-backs. 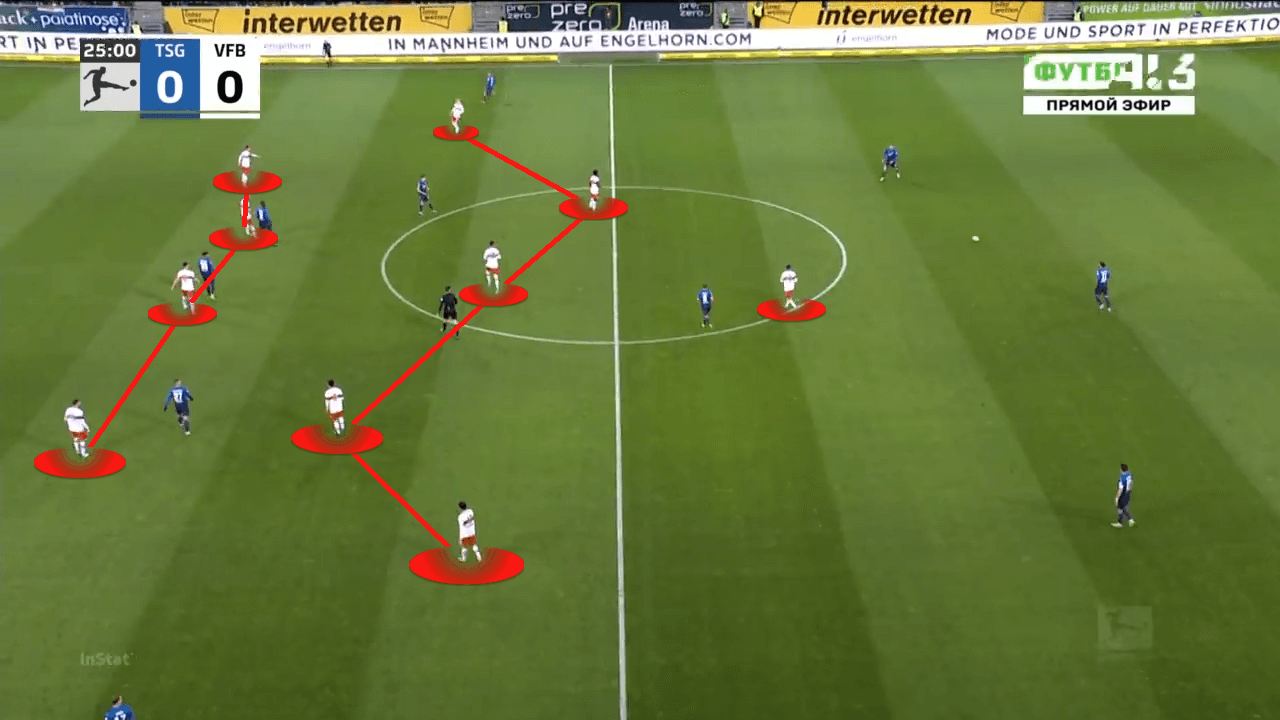 Florian Grillitsch played a massive role regarding Hoffenheim’s ball progression, as from his middle centre-half position he could skip past the opposition press and find either David Raum or Pavel Kadeřábek at wing-back. When this kind of scenario occurred, Stuttgart transitioned into a 5-4-1 formation, with winger Chris Führich joining the backline. 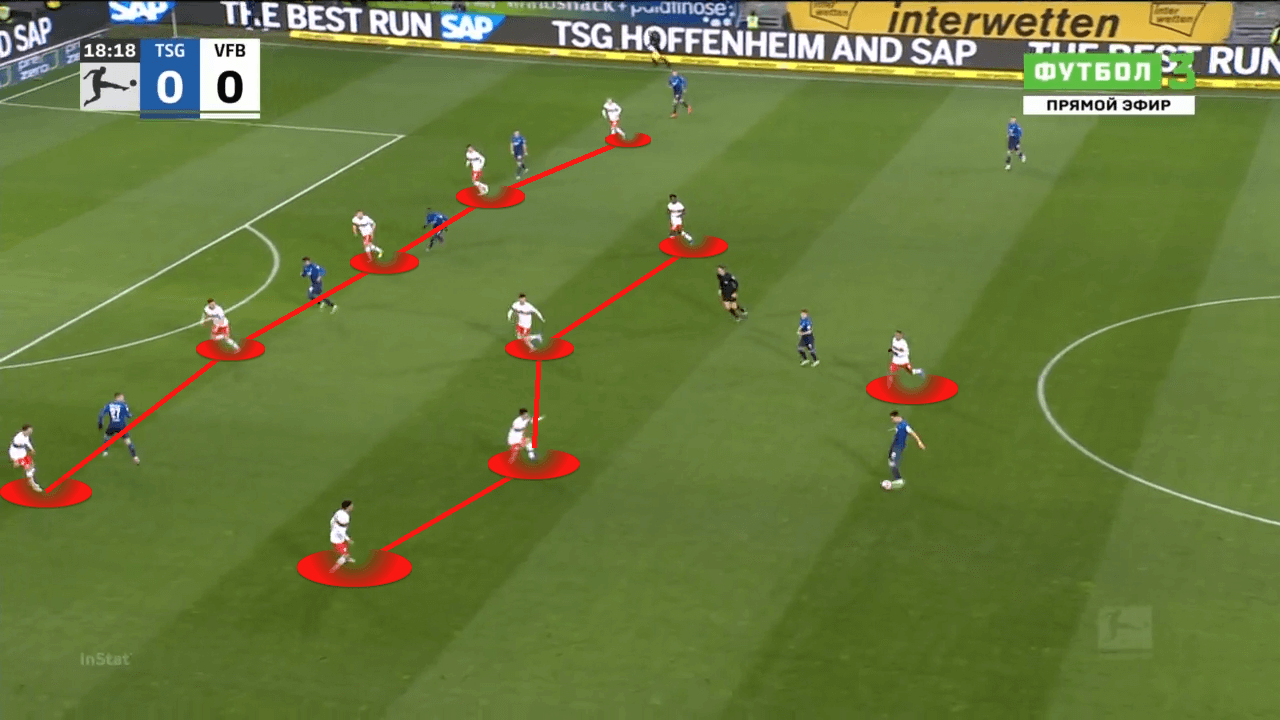 Overall, both sides put on strong defensive displays, which kept the balance of the match even going into the half-time break. Stuttgart found attacking avenues on the counter but could construct nothing through structured possession. The same can be voiced in regards to Hoffenheim; Grillitsch provided much-needed ball progression, but their attack was not sharp enough.

The versatility of Florian Grillitsch

As mentioned prior, Florian Grillitsch provided ball progression through his long-range passing when short passing exchanges were not possible. This element of his game is not new to consistent watches of the Austrian international. Another component that Grillitsch shows regularly is his versatility and tactical flexibility. Florian Grillitsch presents a vast skillset, allowing him to comfortably play as a defensive midfielder, as well as centre-back where he began the match and as a number eight. Sebastian Hoeneß understood something was not right with his team, as they could not evade opposition pressure and apply their usual game. Just before the half-time interval with 5 minutes to go, Hoeneß made a tactical change; placing Grillitsch further forward forming a double pivot with Dennis Geiger, with the team shaping now a 4-2-2-2. 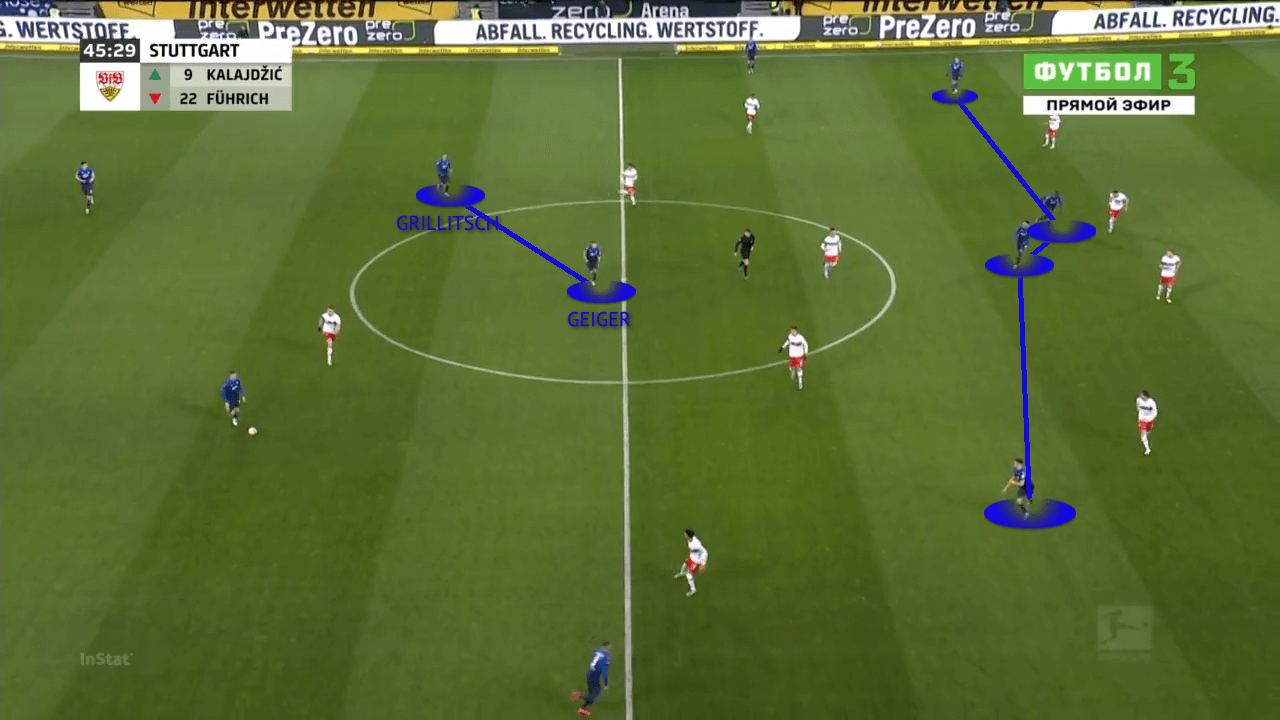 This change of scheme made a big difference concerning Hoffenheim in possession and out of possession. When considered in possession, Hoffenheim’s newly created midfield pair would split horizontally, creating vertical passing lanes for Ihlas Bebou to receive in space. Florian Grillitsch adds supplementary support to the forward; with his crossing ability within the half-spaces. 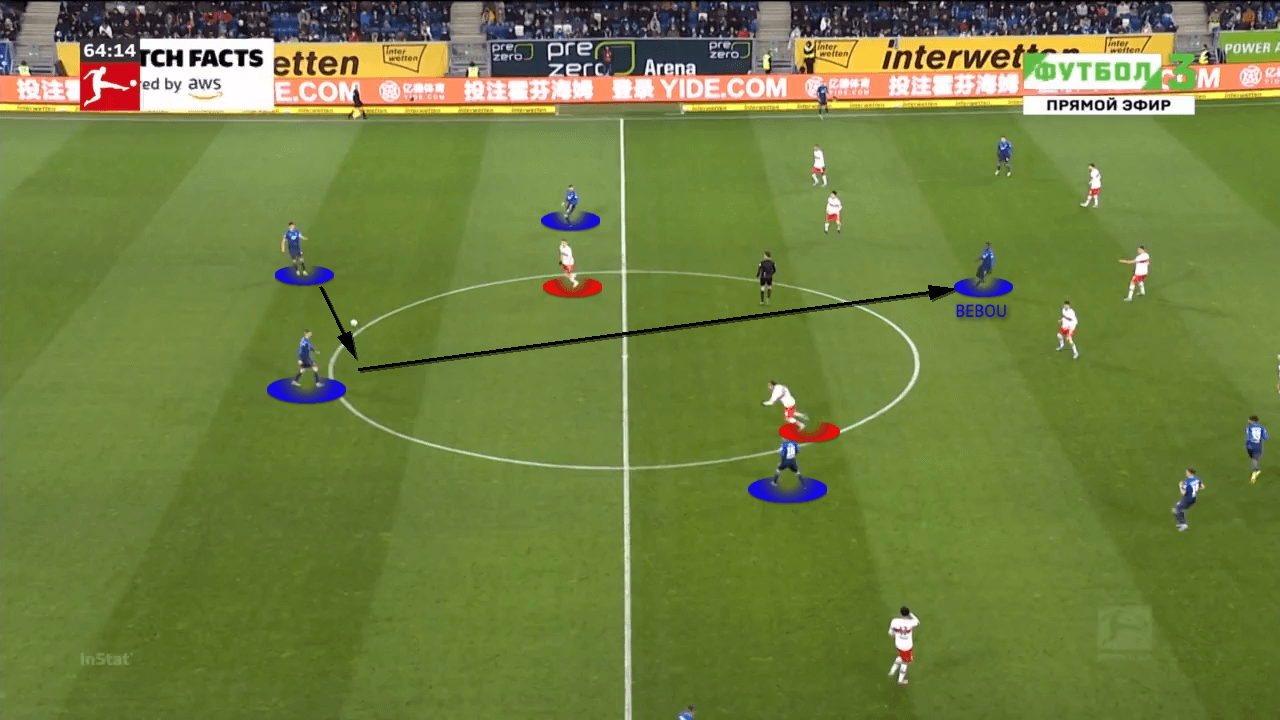 In a defensive sense, the midfield two added security against Stuttgart’s biggest offensive threat. As mentioned previously, Stuttgart could not progress through structured possession, but created favourable opportunities through counterattacking. Hoffenheim was susceptible to this form of attack during the first half due to committing so many attacks forward when on the ball, leaving Dennis Geiger and the back three to fan the flames. Having both Florian Grillitsch and Geiger just outside the area made a world of difference, winning the ball back in the middle and final third and sustaining attacks in invaluable areas instead of having to constantly recycle possession.

Christoph Baumgartner has played a very important role for Hoffenheim since he broke through in 2018. The young attacking midfield played a major role during their late show vs their Stuttgart during the last five minutes of the match. Before this dramatic turn of events, Baumgartner excelled throughout the match, whether the last third man runs against the opposition’s blindside or combining with Pavel Kadeřábek in the half-space; Baumgartner showcased his quality. The two late goals depict what makes the Hoffenheim midfielder so good; his ability to find space within the penalty area.

Most attackers in this situation would burst into either post looking for a quick cross from out wide. The 22-year-old decides to slow down his movement as he enters the box, allowing space in front of him. 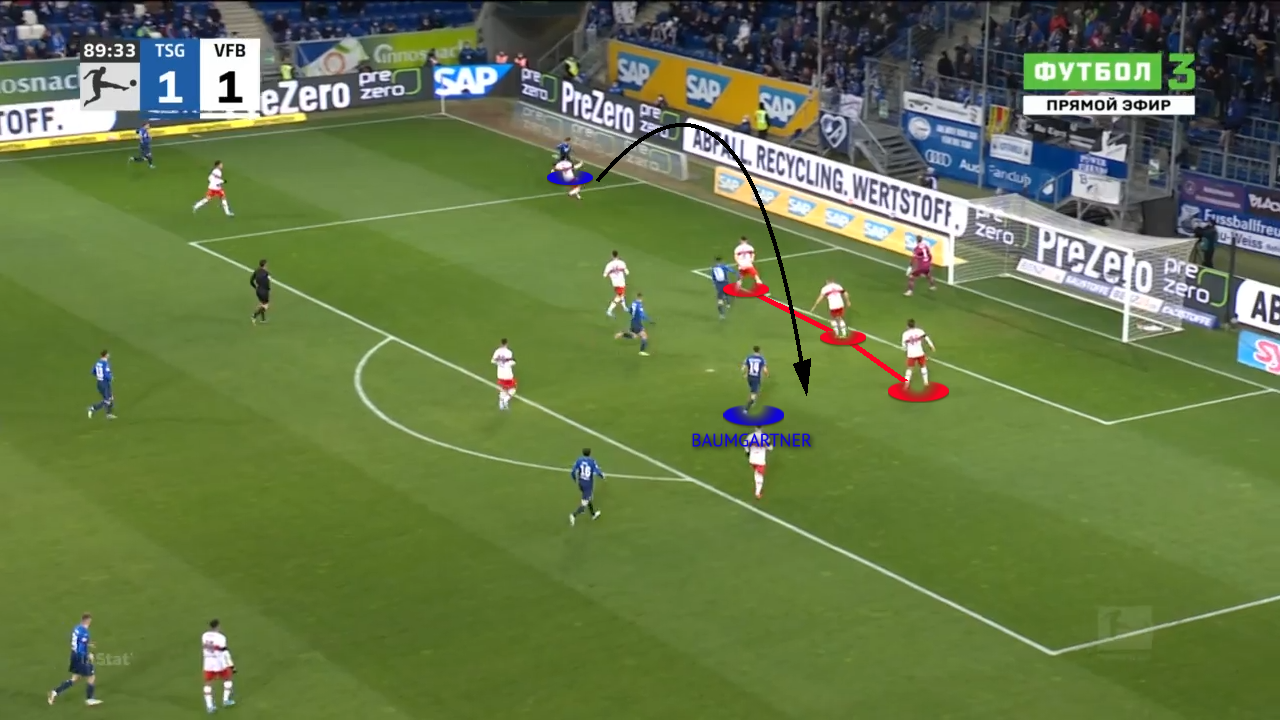 Both Pellegrino Matarazzo and Sebastian Hoeneß have experienced the highs and the lows of the Bundesliga; Stuttgart was the entertainers of the league one year ago, while Hoffenheim attempted to rise from the abyss. During the present day, the tables have turned, and it is Hoffenheim’s time to experience being on the league’s main attractions. This first match of the matchday was important to both sides, but for a different reason. As Stuttgart’s probability of relegation gets higher and higher, every point counts if they wish to escape. Hoffenheim aim to continue their fine form as they sit in Champions League places. This game started as a real stalemate; both teams denied each other, which left the score at 0-0 at halftime. Through tactical tinkering and the brilliance of Christoph Baumgartner, Hoffenheim claimed all three points, as the chase for the European promised land continues, for now.