In this data analysis piece, we will be looking out for the best centre-backs currently playing in OBOS-ligaen using statistics. Centre–backs in the modern game have evolved a lot. No longer do we find them only defending and being part of the backline to defend. They play a huge role in the team’s attacking success too by starting attacks from the deep.

In our analysis, we will be considering both the attacking as well as defensive attributes.  We will be looking at players who have registered at least 1000 minutes of football in the 2021 league season. Also, only proper centre-backs are taken into consideration i.e. no makeshift options included.

The key aspect in which centre-backs are often considered is how they engage in the duels and how well they complete and win them successfully. Right from the likes of Van Djik to Sergio Ramos, all of these modern-day defenders are very good at challenging and competing even with the strongest and quickest of players. So we look into such players in our first section where we compare the Superliga defenders based on the number of defensive duels they attempt per game and the success rate. 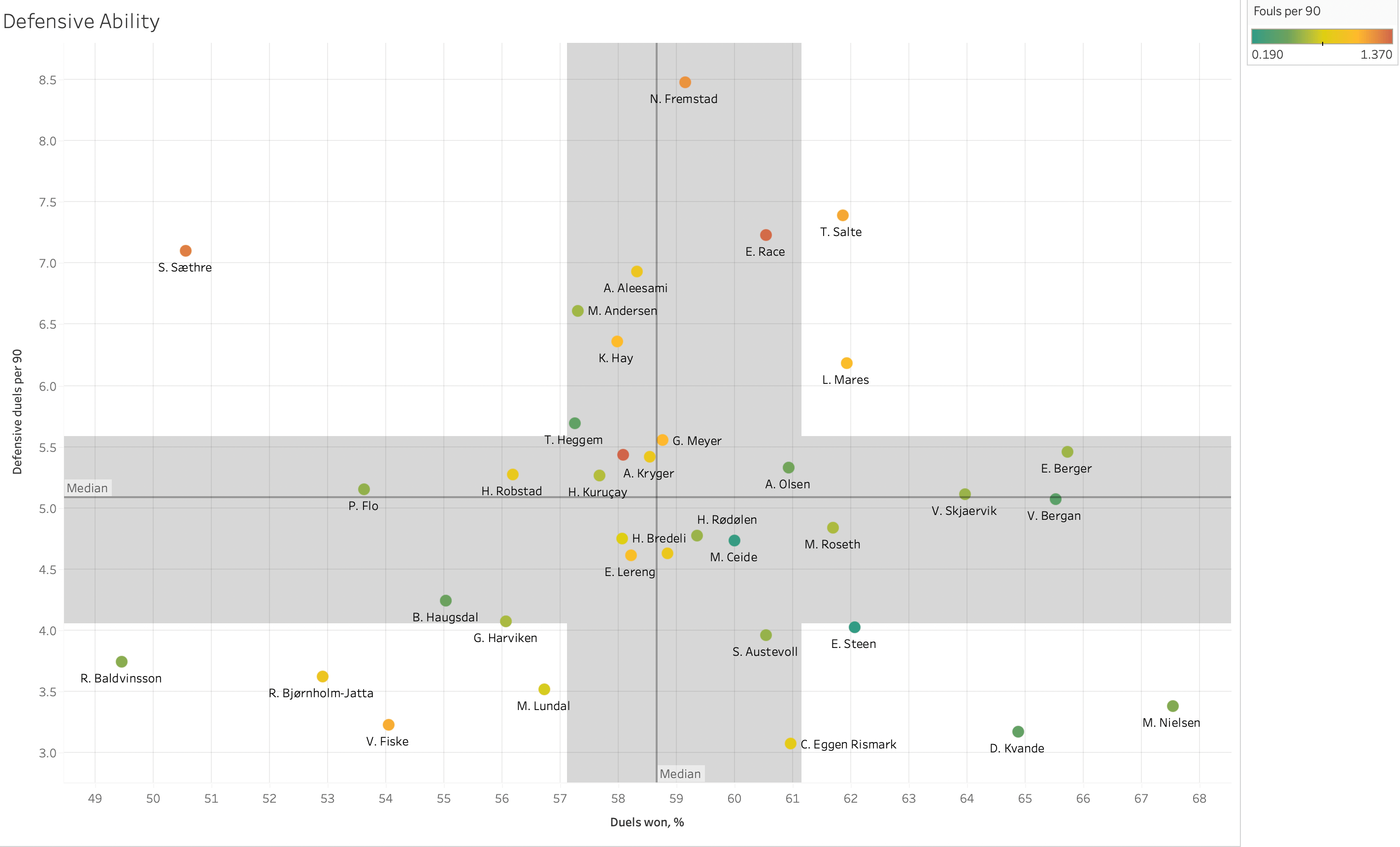 Luc Mares – The 25-year old Dutch centre-back who played for Start last season. He recorded 6.18 defensive duels per game with a win accuracy of almost 62%. He also made 1.04 fouls per game last season which is quite in the average region for the CBs.

Tord Salte – The 23-year old centre-back from Sogndal. He averaged 7.39 defensive duels per game last season with a success rate of 61.86%. He also made 1.14 fouls per game in the league that season.

Edvard Race – The 24-year old CB from Raufoss. He recorded 7.23 defensive duels per game with an accuracy of 60.54%. He also averaged 1.35 fouls per game in the league which is among the highest showing he is a high-intensity player.

Espen Berger – The 27-year old CB from Sandness Ulf. He recorded 5.46 defensive duels per game with a success rate of 65.73% which is a very good value for a CB and also he recorded just 0.61 fouls per game which is again very good.

Nicolai Fremstad – The 24-year old centre-back / defensive midfielder from Raufoss has recorded 8.48 defensive duels per game with a success rate of 59.15%. He also recorded 1.23 fouls per game which is slightly in the higher range of the spectrum. Nevertheless, he is among the top defenders who has attempted a very high volume of tackles and is bound to concede a little more fouls than average.

It’s a well-known fact that defending is not just about diving into tackles and making challenges to win the ball back. Though these are some of the things that gets the crowd going they are not the only thing that any defender should be having. It is very important for a defender to read the play and intercept passes to block lanes since these have very little room for making errors and equally being effective in suppressing the opposition’s threat. 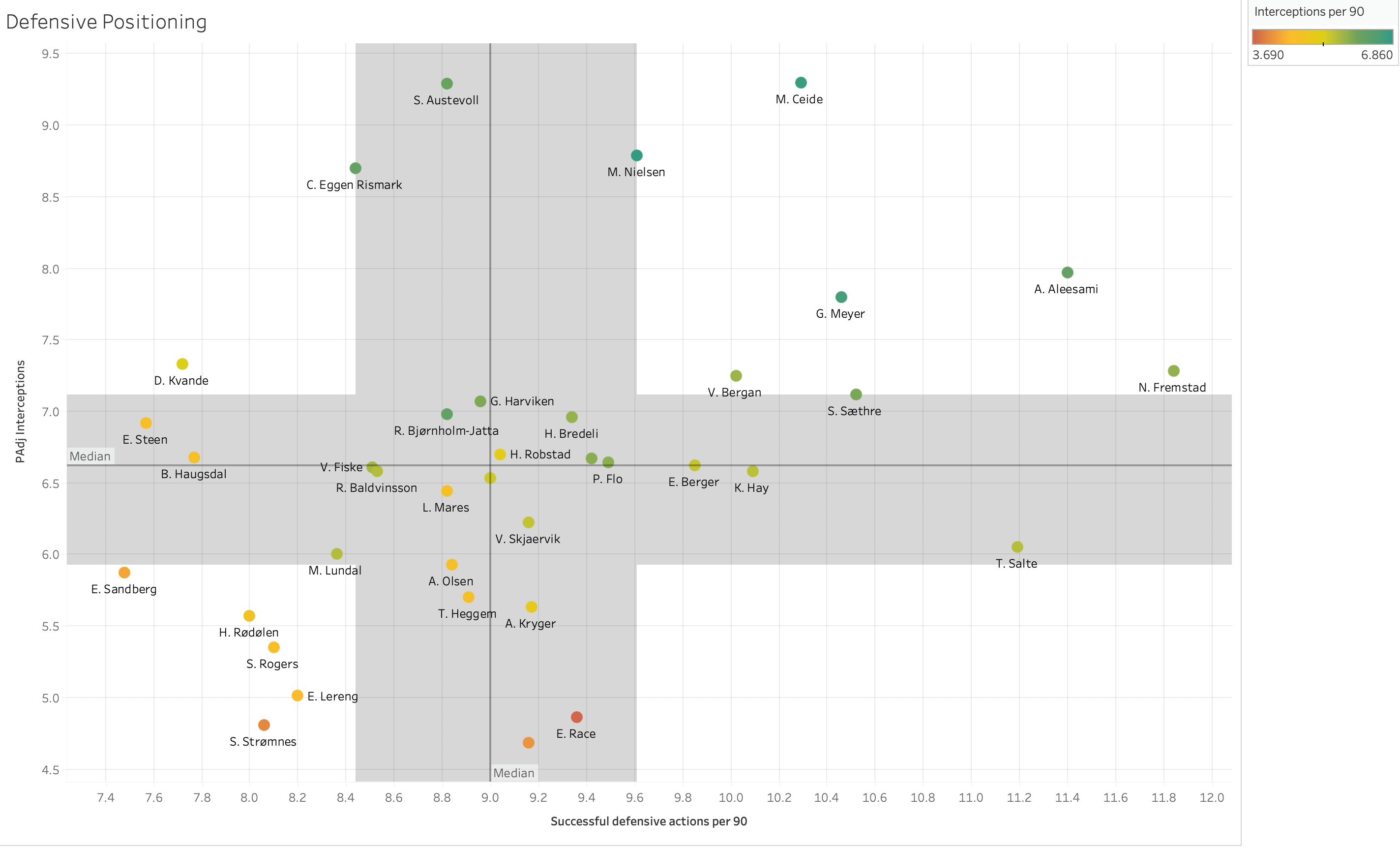 Mikkel Ceïde – The 20-year old CB from Roseborg who played for Ranheim last season. He played in the 2nd division for the latter last season. He has recorded 6.75 interceptions per game and adjusting that with possession it goes up to 9.3 per game. He has also made 10.29 successful defensive actions per game.

Ayoub Aleesami – The 26-year old CB from Fredrikstad. He has averaged 6.23 interceptions per game with a possession adjusted value of 7.97. He has recorded 11.4 successful defensive actions per game.

Nicolai Fremstad – The 24-year old recorded 5.82 interceptions per game and 7.28 possession adjusted ones per game. He ranks the most for successful defensive actions per game with a value of 11.84 per game.

Mads Nielsen – The 27-year old centre-back from Fredrikstad. He recorded 6.86 interceptions per game and 8.79 possession adjusted ones per game. He also recorded 9.61 successful defensive actions per game in the league last season.

Most of the teams these days still use long balls techniques to attack. So the ability to win an aerial duel against the opposition’s forward is a bonus. It also helps teams during set-pieces while defending. Center-backs especially have to deal with tall centre-forwards of the opposition who may possess a great threat aerially. 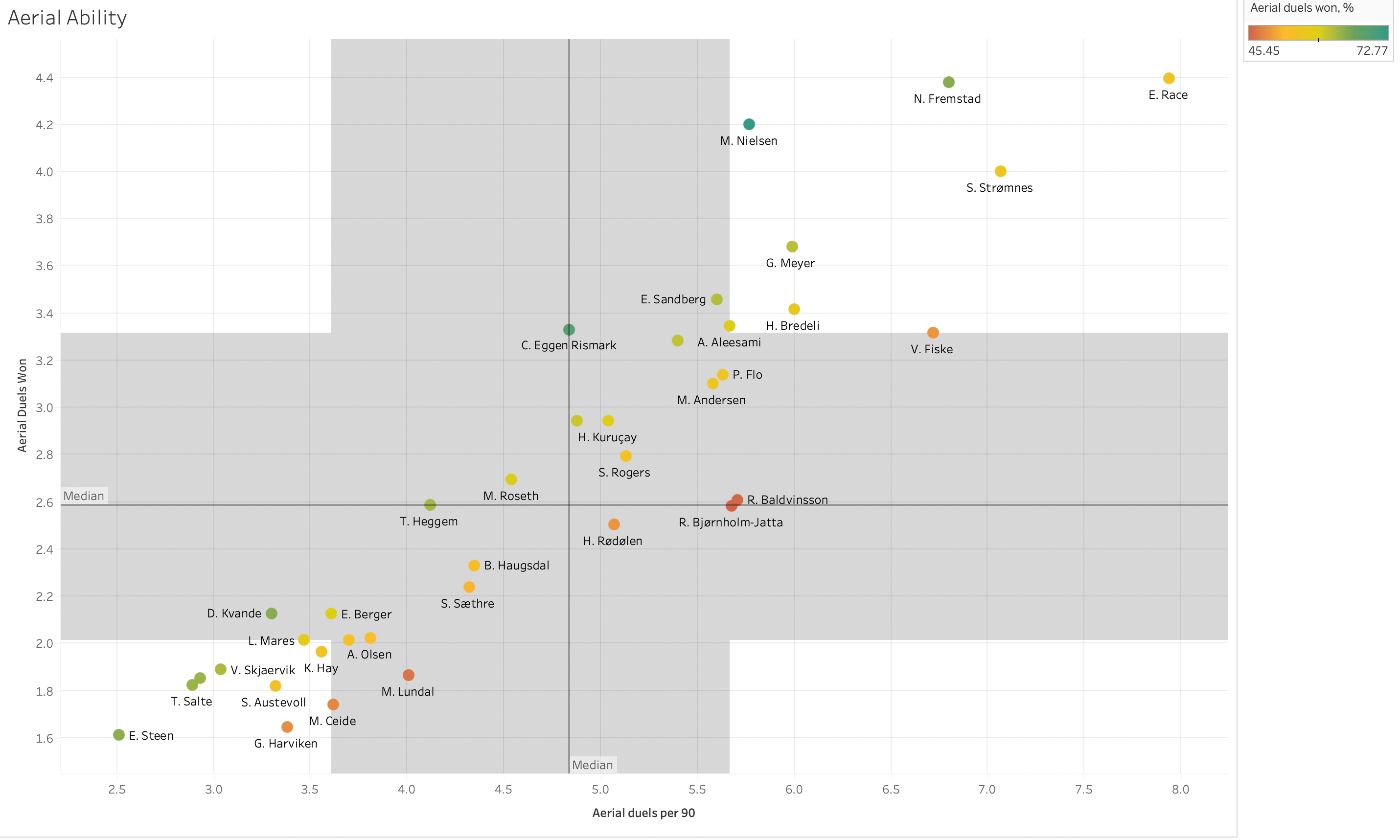 Nicolai Fremstad – The 24-year old recorded 6.8 aerials duels per game in the league last season and won 4.37 of them on average per game.

Steinar Strømnes – The 34-year old CB for HamKam. The veteran averaged 7 aerial duels per game and won 4.04 of them on average per game. Though he won just above half of the aerial duels, he still is a reliable player in the air for his side.

Mads Nielsen – The 27-year old recorded 5.77 aerial duels per game and won 4.2 of them showing every impressive ability to win most of the duels he contests in the air.

In this section, we’ll analyze the list of defenders we have based on a tendency to move the ball forward and also their ability to progress the attack both with their passing as well as carrying. 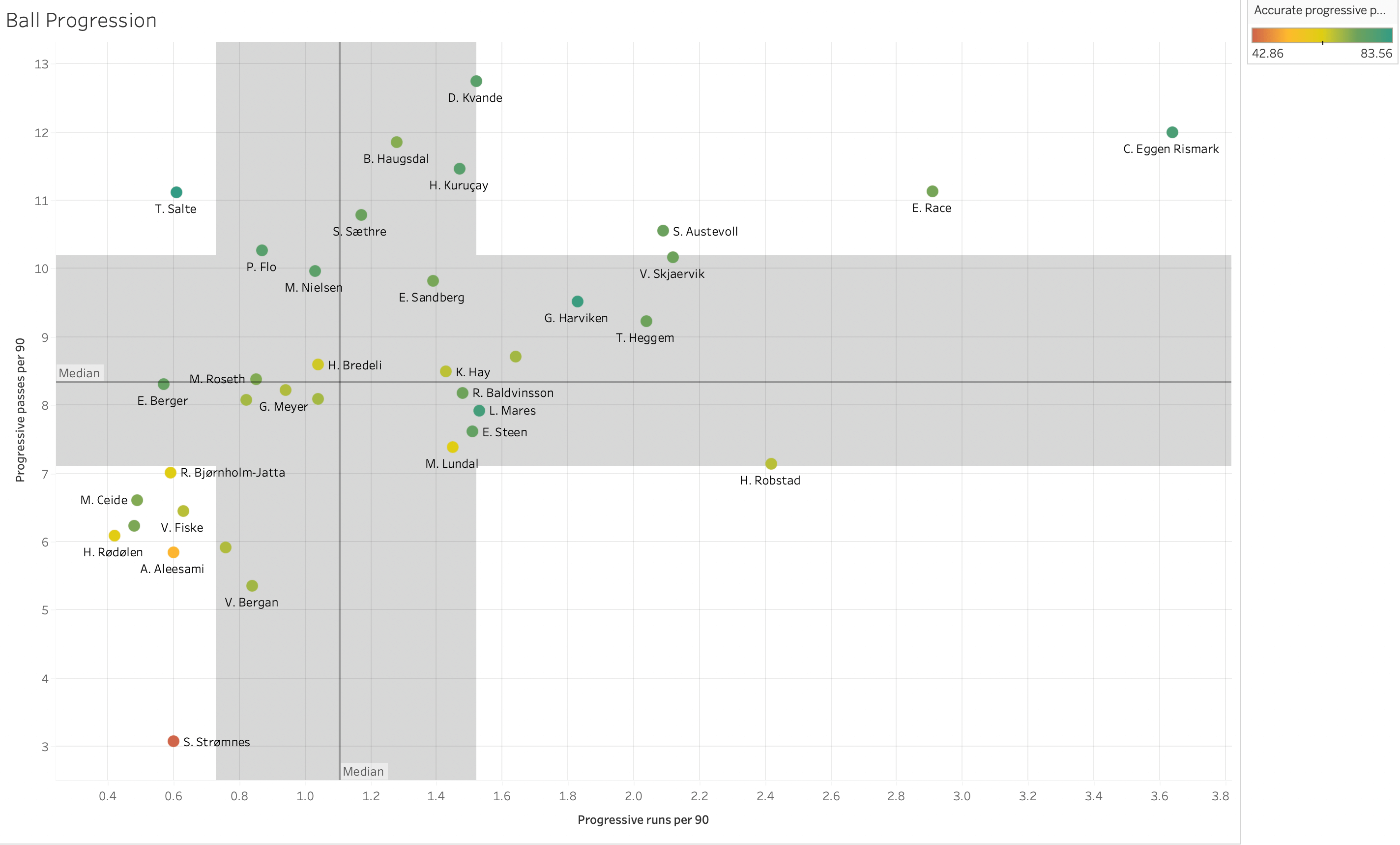 Edvard Race – The Raufoss CB recorded 11.13 progressive passes per game with an accuracy of 72.6% and 2.91 progressive runs per game.

Sindre Austevoll – The 26-year old centre-back from Asane. He recorded 10.55 progressive passes per game with an accuracy of 73.71% and 2.09 progressive runs per game.

Daniel Kvande – The 26-year old centre-back from Ranheim. He recorded 12.75 progressive passes per game with an accuracy of 77% and 1.52 progressive runs.

Vetle Skjærvik – The 21-year old centre-back from HamKam. He recorded 10.17 progressive passes with an accuracy of 73.3% and 2.12 progressive runs per game.

Modern-day centre-backs are widely rated upon their ability to perform with the ball. Top teams across Europe like Manchester City, Liverpool, etc all have quality ball-playing centre-backs with them. Their ability to break the press of the opposition acts as a first step towards building up to a goal. 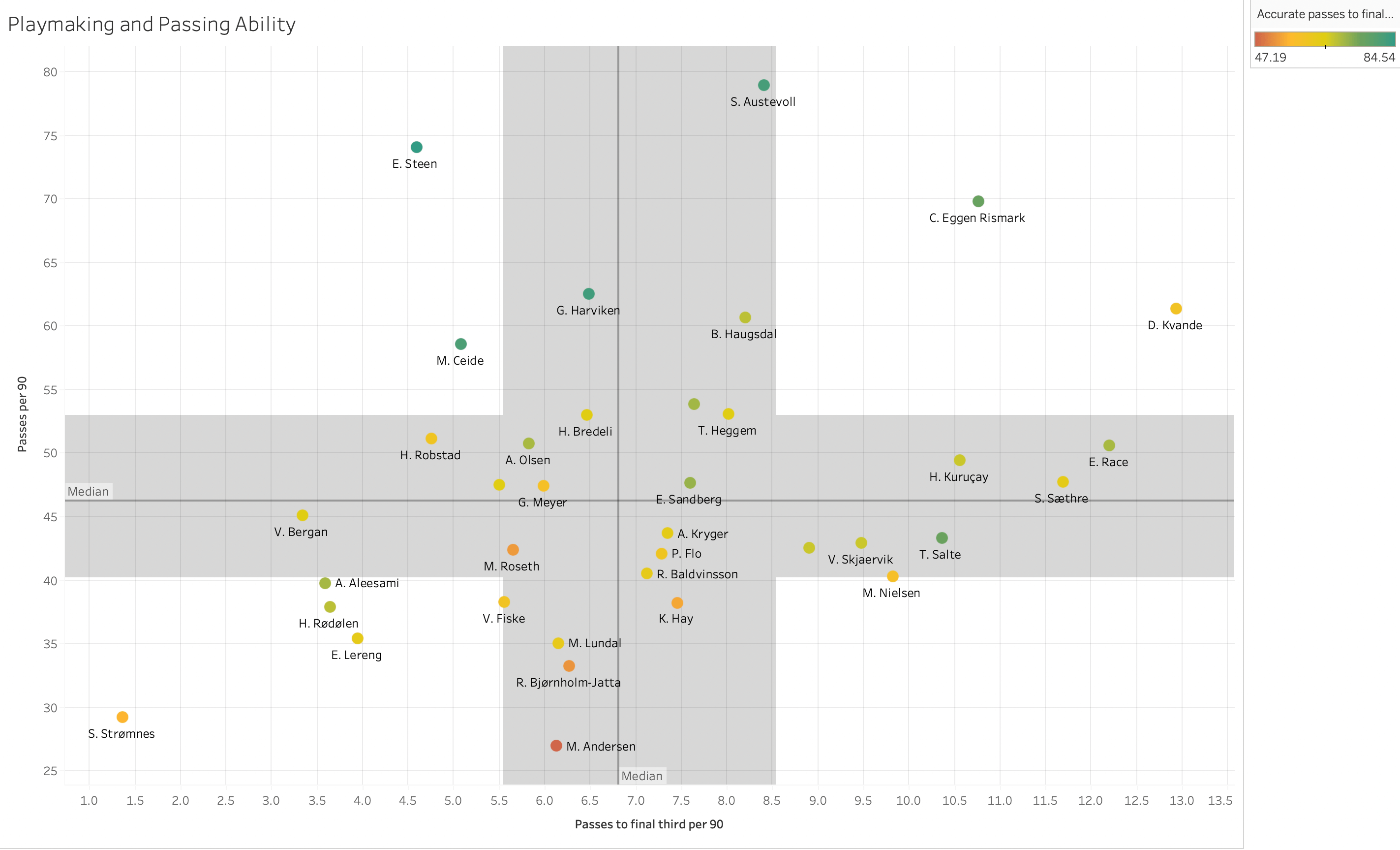 Christian Eggen Rismark – The 30-year old has recorded 69.78 passes per game and 10.76 of them have been passes into the final third with an accuracy of 76.03%, which again is a very good measure value.

Sindre Austevoll – The 26-year old centre-back recorded 78.9 passes per game with 8.41 of them being made into the final third with an accuracy of 81.62%.

Bjarte Haugsdal – The 31-year old centre-back from Asane. He recorded 60.62 passes per game with 8.2 of them being made into the final third per game.

Teams like Real Madrid and Liverpool have thrived on the attacking contributions from their defenders. Players like Sergio Ramos have made vital contributions like in the 2014 UCL final to eventually guide Real Madrid to their 10th UCL title in clutch moments. So, defenders are a definite goal-threat in the modern games during set-pieces. 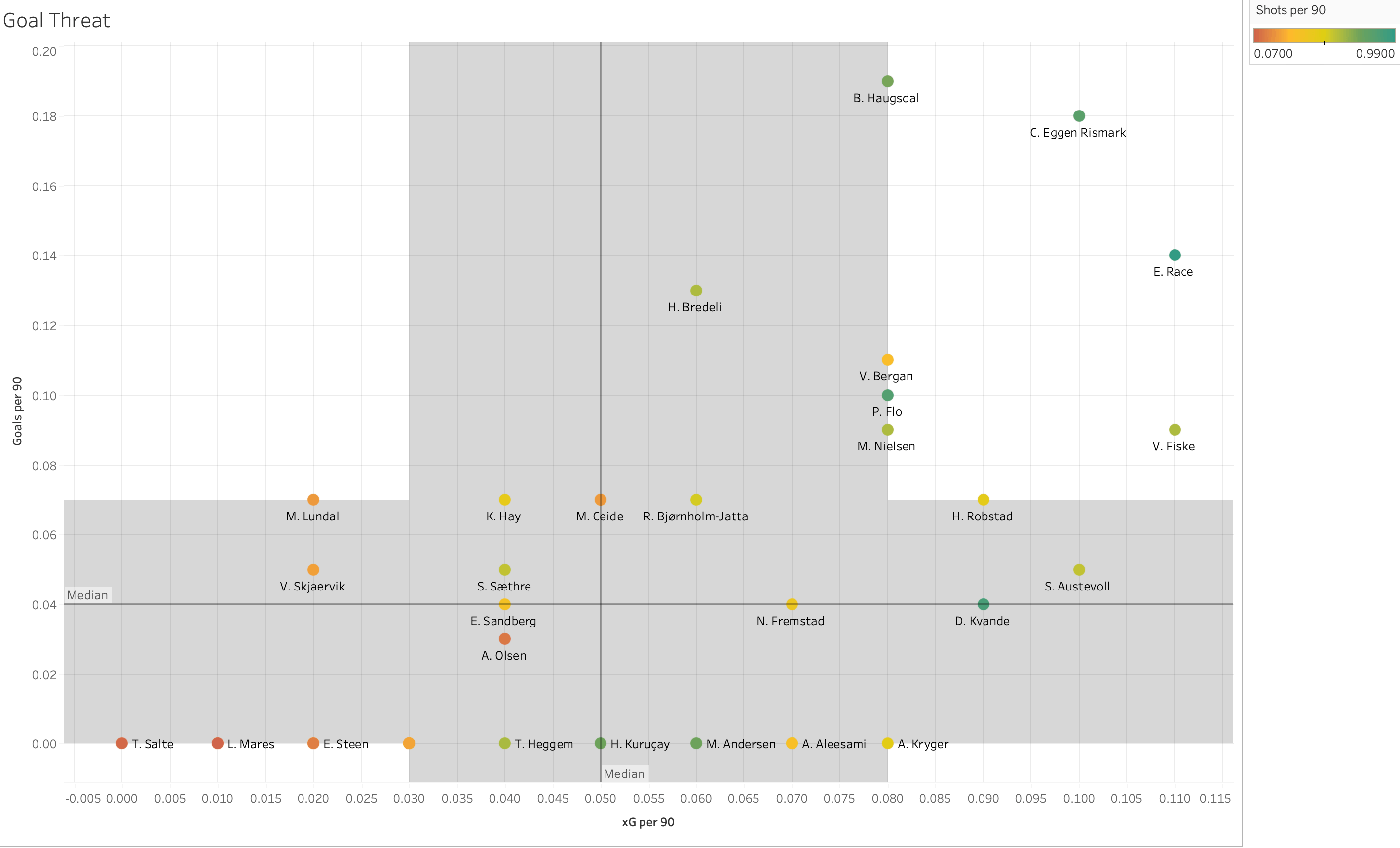 Christian Eggen Rismark – The 30-year old had recorded 0.84 shots per game with an xG of 0.1 on average per game. He also scored 4 goals in the league last season.

Edvard Race – The Raufoss CB recorded 2 goals last season and averaged almost 1 shot per game with an average xG of 0.11 in the league last season.

Bjarte Haugsdal – The veteran CB scored 5 goals for his club while recording 0.74 shots per game with an average xG of 0.08.

Vegard Fiske – The 28-year old from Stjördals B. He recorded 0.63 shots per game but also had the most xG on average per game among the centre-backs in the league with 0.11. He also scored 2 goals for his club last season.

Based on the data and the statistics we have shortlisted a few options to look out for in the forthcoming season where we expect these centre-backs to make bigger strides.

The Raufoss CB is pretty good in the air as shown in the image above and is also a reliable defender on the ground. Though he engages in very few duels compared to the other league centre-backs, he still manages to defend efficiently. He is also good in moving the ball upfield and is a threat in the opposition box too during set-pieces. He would certainly be a potent player if he can improve his reading of the game and intercept possession more often.

The other Raufoss centre-back is much more complementary to Race where he excels in all the things that Race stacks up less in like intercepting the ball more, performing more successful defensive actions per game than usual, etc. He would still like to improve his ability on the ball and be more of a threat during set-piece situations.

The 23-year old has been a very good defender on the ground and has also done well on the ball where he has helped his team with his ability on it. He also showed good reading ability and performs well in that regard. He would definitely like to improve his ability on the air and do well there.

The OBOS-ligaen possesses some fine centre-backs with most of them being young and with high potential. In this article, we have covered both the attacking as well as the defensive traits to discuss and list a few of the best performing players. A lot of players have been handpicked and have seen themselves playing in multiple top-tier clubs across the Scandinavian regions. We could see that the players we saw and discussed could also follow the same path and be successful at the top level.