In what was billed as one of the top matches of the opening weekend of the Bundesliga, two new coaches in Marco Rose and David Wagner were looking to open their account at their clubs with a debut three points. Of course, neither side was able to capture the three points, but the game was nevertheless very interesting from a tactical perspective and we got a first look at both team’s tactics in the Bundesliga. There is no doubting Borussia Monchengladbach were the better of the two sides, but Schalke executed their game plan relatively well in order to frustrate and hold Gladbach to a stalemate. In this tactical analysis, I will look at the tactics employed by both teams and delve into the big talking point from Monchengladbach regarding their number ten role.

Gladbach lined up as expected in Marco Rose’s signature 4-4-2 diamond, with summer recruit Breel Embolo operating as a number ten. Schalke meanwhile lined up in a 4-4-2, which created an interesting tactical battle between Gladbach’s central midfielders and Schalke’s wide players, as I will address in this piece. 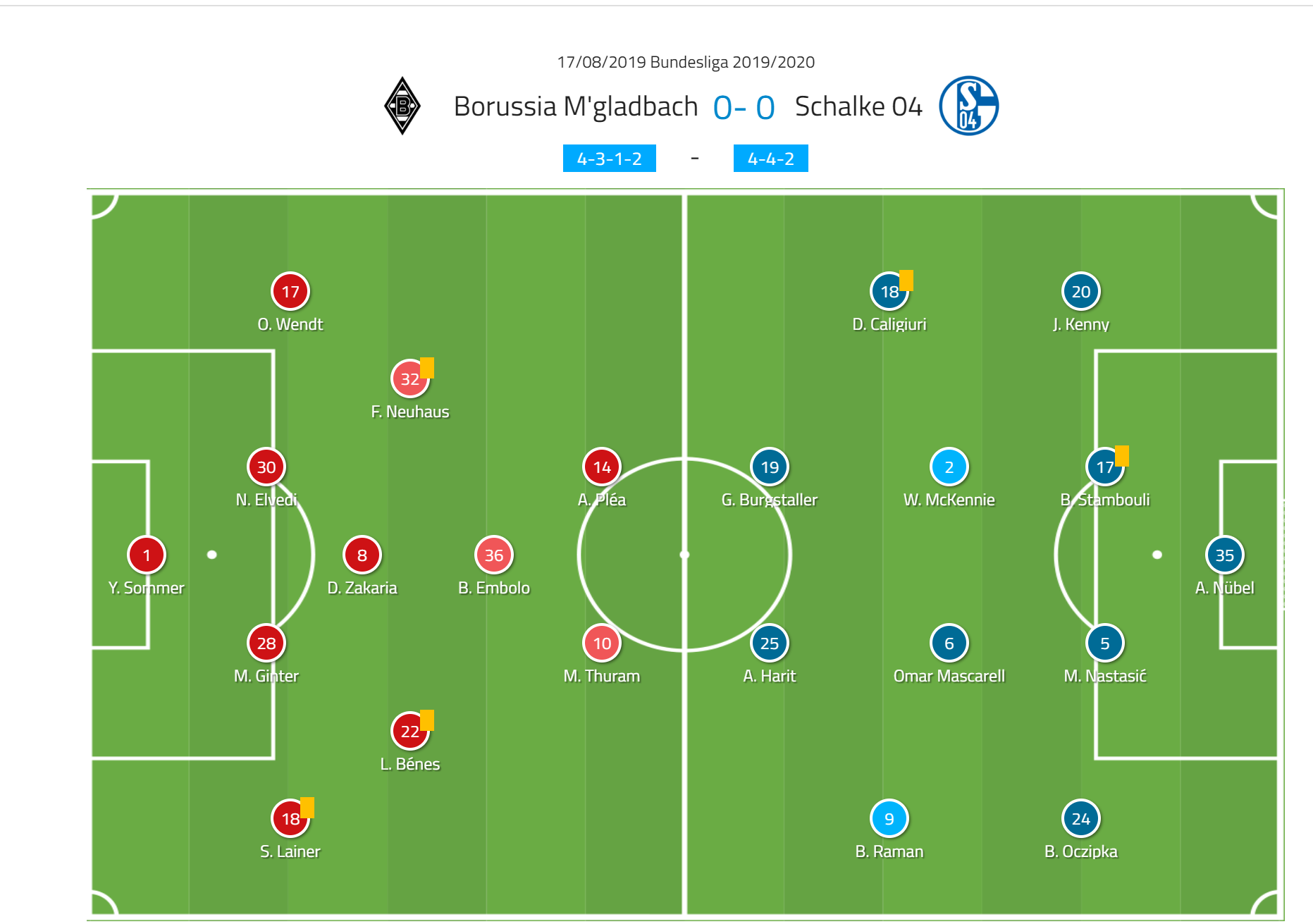 Gladbach looked like a signature Rose side, and many of the tactics seen at his previous club Salzburg were employed by Gladbach. One such similarity was the pressing structure of Gladbach which I’ve outlined below.

The goalkeeper receives the ball and Schalke’s full-backs go high and wide to stretch the play. Gladbach’s front three mark the centre backs and the pivot respectively, cutting off the central options and forcing Schalke wide with a pass out to the full-back. 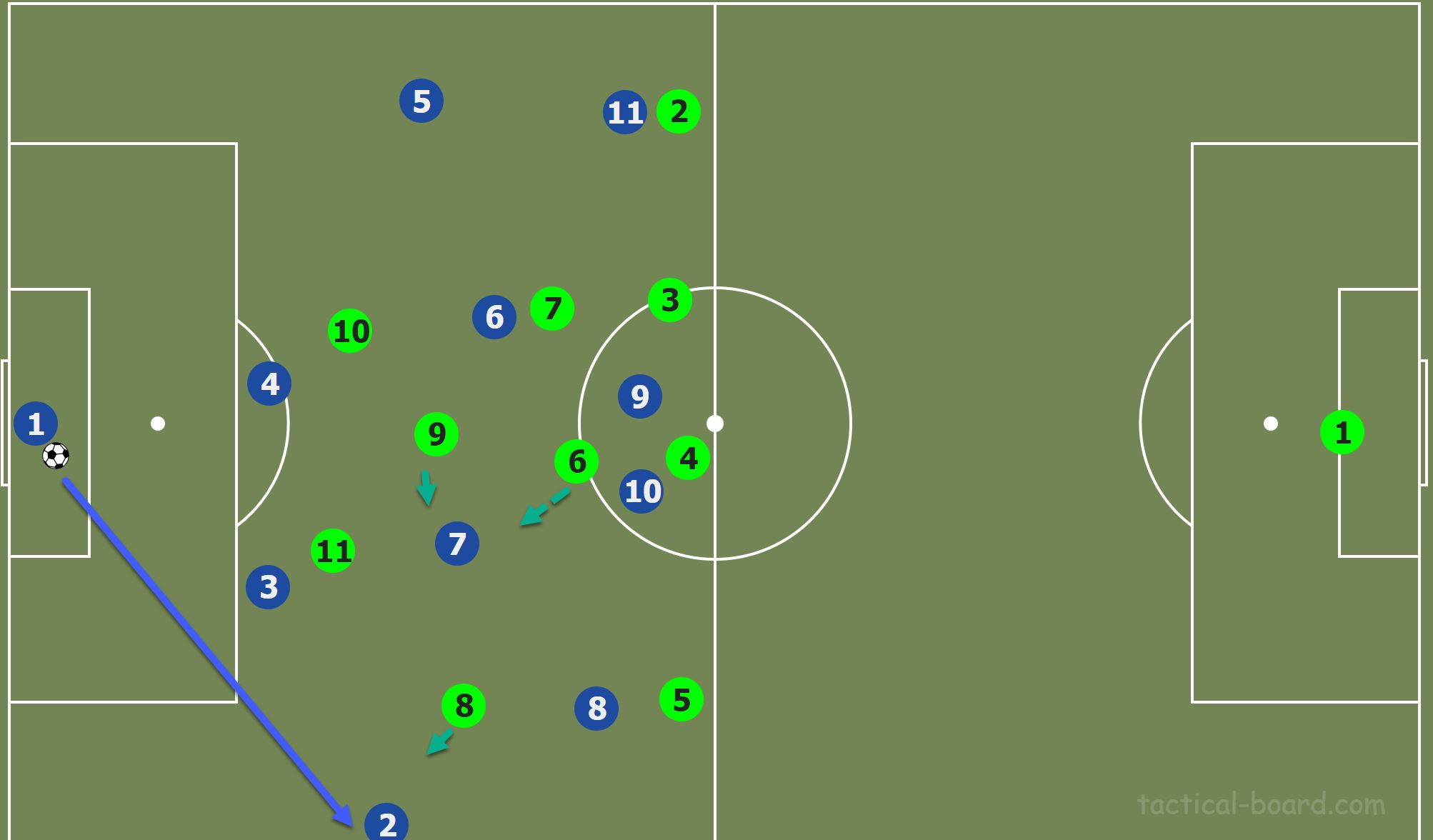 We can see this situation roughly below, where Schalke nearly offer a solution. The positioning of Schalke’s pivot doesn’t allow for any kind of pressing trap to be set, and so the only option for Kenny is to play the ball down the line. The winger lures a press form left full-back Oscar Wendt who moves forwards and leaves a space behind him which Kenny plays the ball into. Ginter then follows the striker receiving the ball in this space, while Zakaria drops into the space left behind by Ginter. Again, flexibility is a key principle in the press and a massive advantage of the midfield diamond.

We can see in this example below also, the front three forces a pass out wide, where Schalke’s full-back is forced to play down the line due to being pressed by the nearest Gladbach central midfielder. But with Schalke’s winger either switching off or refusing to come deep, Lainer gets ahead of him and gets the ball easily ahead of the Schalke winger.

As a result of this pressing structure, Schalke struggled to build up at all and relied on long balls to advance up the pitch, hence the 61% ball possession for Gladbach. In fact, 17.04% of Schalke’s passes were long passes, compared to Gladbach’s 5.24%. However, could a small adjustment from Schalke helped to build up slightly, and even increase the effectiveness of the long ball?

As outlined above, Schalke’s full-backs moved high and wide in possession and looked to stretch the play, however, this makes it easy for Gladbach’s central midfielders to mark them, as highlighted above. Schalke may well have been better off being more conservative with their full-backs, and encouraging them to take up deep positions rather than high ones, as this would attract the central midfielders higher and full-backs higher, therefore creating more space higher up the pitch. Of course, there would be less space to work in, but Schalke weren’t really utilising the space they had anyway.

Attracting a super high press from Gladbach as we can see below would then leave more space in behind, but there still comes the problem of winning 1v1 duels for Schalke, something which they struggled with all game. 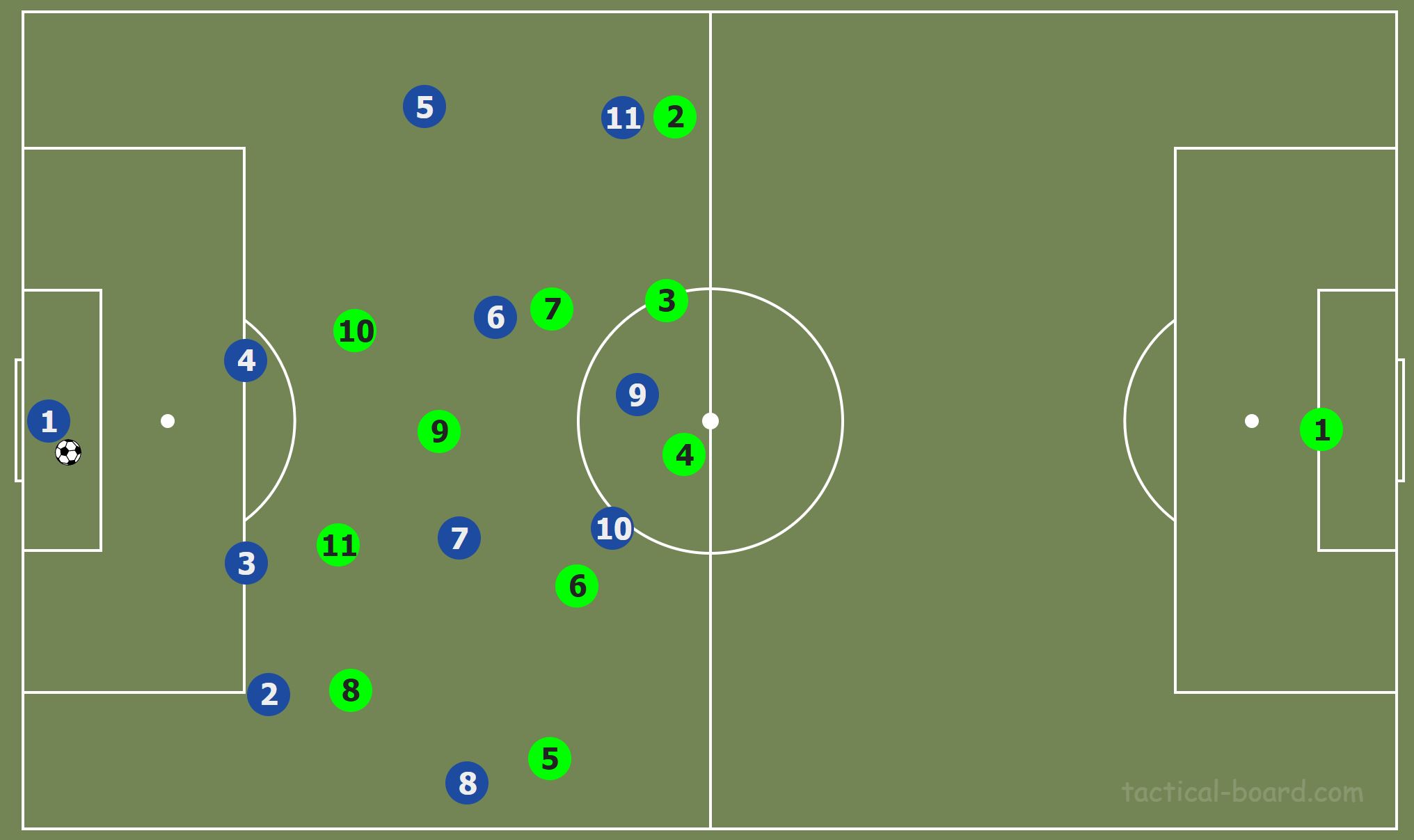 We can see the kind of situation Schalke wanting to maximise below, with Schalke evading the press and giving themselves a good numerical chance to create a chance, however, they again lose the duel and fail to capitalise.

Much of Gladbach’s struggles offensively were down to players being unwilling to collect the ball deep and move the opposition. Too much emphasis was placed upon Nico Elvedi and Matthias Ginter to try and play penetrative passes to static midfield players, and Breel Embolo was a perfect example of this. Zakaria struggled to receive the ball with his movements usually tracked by a Schalke forward as we can see below, however, when his movements were tracked, no other Gladbach player dropped in to try and receive the ball, and instead stayed static and just waited for the ball. Embolo, in particular, was guilty of this, and at times looked as if he just didn’t want the ball.

We can see again below, a static line of three Gladbach players with none of them really offering any kind of passing lane. This isn’t the biggest problem initially though, as Zakaria fails to recognise the space he is in and runs into the strikers cover shadow where he can’t receive the ball, rather than holding any run and receiving the ball in the space.

When Zakaria was able to receive the ball in these kinds of areas, Gladbach were able to create quick overloads with their full-backs, but on more than one occasion were unable to take advantage of the space. Below we see Embolo not recognise the space Wendt is in behind him, leading to Gladbach losing the ball rather than creating a goal-scoring opportunity.

The best form of playmaking?- Counterpressing.

Jürgen Klopp has a quote which has stuck with me quite a lot:

“No playmaker in the world can be as good as a good counter-pressing situation.”

Marco Rose, who worked under Klopp seems to share this same philosophy also, and despite Gladbach fans’ worries around the number ten position, this position may not be a playmaker for the side. Embolo is a quick, aggressive player, ideal for counter-pressing and pressing situations and so Rose may judge that the number 10 position must be played by somebody who has the qualities to counter-press, and could, therefore, prioritise this quality over playmaking. However, Embolo’s struggles in this game should make it interesting to see who starts next week in the position.

Rose’s side obviously has a heavy emphasis on pressing (as does this article), with Gladbach only allowing 5.73 passes before a defensive action (press) against Schalke, compared to Schalke who allowed Gladbach on average 10.82 passes per defensive action.

Despite Gladbach’s highlighted trouble in playmaking and creating chances through build-up, they still managed 1.8 xG. So how did they do this? Counterpressing. Gladbach’s two biggest chances in the game, as well as many others,  came from Gladbach winning the ball back and exploiting the spaces quickly, so let’s look at the counter-press.

A key part of Gladbach’s and Rose’s counter-press is the aggression of the centre backs and their willingness to engage in duels high up the pitch. This is something Rose struggled with at times at Salzburg, with lesser quality centre backs unable to win duels. However, in this game, both Ginter and Elvedi were excellent and won their duels as we can see below.

Here, Elvedi steps out and gets tight to the striker in order to cut the attack at its source. Lots of centre backs would be reluctant to step out and deal with the threat, as there is a space left behind, however this space is only a problem if it can be utilised, hence duels have to be won.

We can see a more extreme example here with Ginter, where as soon as the ball is lost Ginter makes a forward movement to go and retrieve the ball, the definition of a counter-press. Again Ginter risks the opposition exploiting the space in behind, but only if he loses the duel, which he didn’t. If the ball is played through and Ginter has retreated, it’s likely Ginter will be unable to catch up, as it takes more time to turn and run the opposite way than it does to run forwards as Ginter does here.

The biggest opportunity in the whole game was down to this counter-pressing situation below, where Zakaria steps forward and intercepts the pass, preventing the counter-attack and recovering the ball high up the pitch.

Within seconds the situation then looks like this, and Alassane Pléa should have scored to put Gladbach in the lead.

Schalke were the happier of the two teams leaving Borussia Park on Saturday, although Gladbach will have seen plenty to take positives from, most notably their out of possession work which has been the focus of this analysis. Schalke looked solid but lacking any kind of goal threat, perhaps due to their solidity, and I would not be surprised to see Gladbach struggle throughout the season against teams which bypass the press should their offensive movement not improve, which I expect will given time.