Under Roger Schmidt, Benfica have been one of the most exciting teams to watch in the 2022/23 season. Since taking over in July, the German manager has won all of his first nine matches. With dominant tactics, Schmidt has brought back stability and success after a turbulent season at the Estádio da Luz. Consequently, despite being drawn into a very difficult group with Juventus and Paris Saint-Germain, Benfica may prove to be one of the dark horses of this season’s UEFA Champions League. Nationally, they sit at the top of the Primeira Liga as one of the favourites to win the title.

After losing Darwin Núñez to Liverpool among a few other players, the Encarnados have rebuilt their squad with exciting players over the summer. First, very promising players like João Victor, Enzo Fernández, and Alexander Bah have arrived. Additionally, President Rui Costa has signed high-quality players such as Julian Draxler, David Neres, and Fredrik Aursnes to enhance Schmidt’s side. With entertaining tactics and a talented squad, Benfica are certainly a team to watch this season.

In this tactical analysis, Benfica’s tactics under Roger Schmidt will be examined in detail. In addition to understanding who their key players are, this analysis will look at their principles throughout multiple phases of the game.

As far as formations are concerned, Schmidt has been consistent. The German has used a 4-2-3-1 60% of the time, with a 4-4-2 variation of it being used another 25%. Similarly, with a few exceptions, the lineups have been extremely consistent. Odysseas Vlachodimos is the goalkeeper with Nicolás Otamendi and Felipe Morato as the centre-backs. New signing Alexander Bah has alternated with the Brazilian Gilberto for the right-back position. On the left, star Alejandro Grimaldo is a regular. 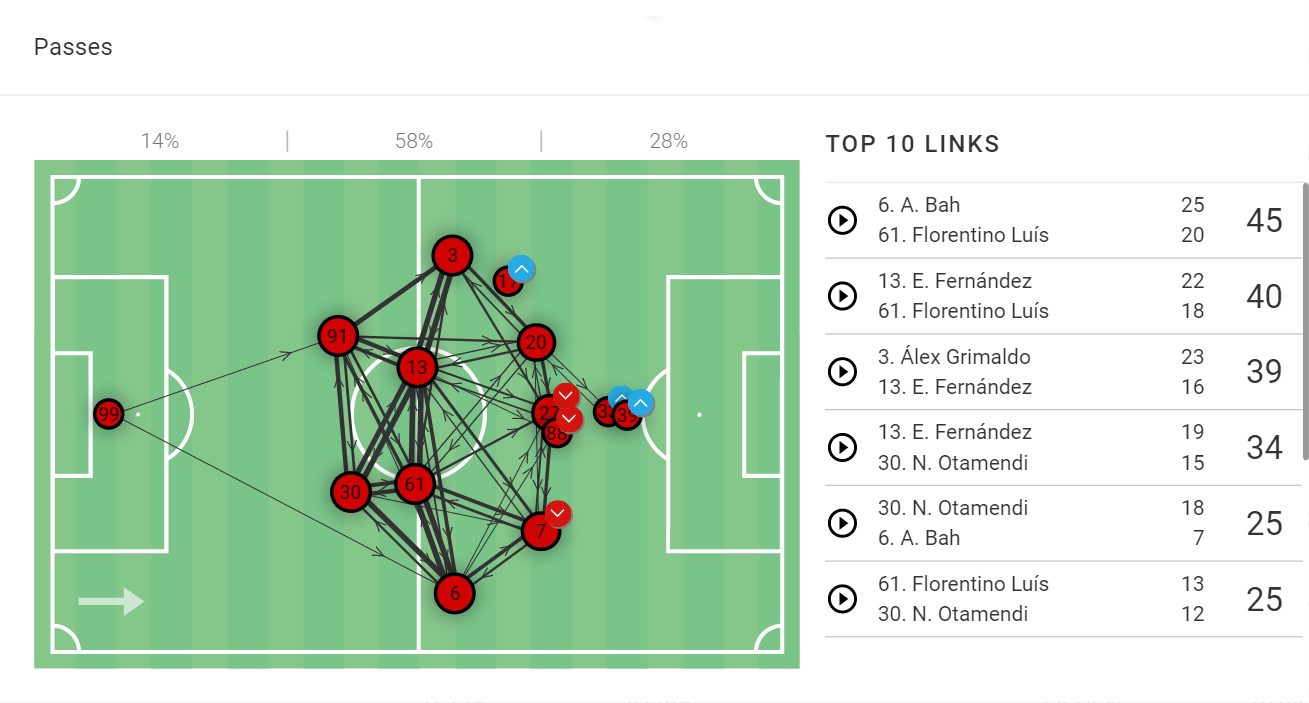 Benfica’s structure, despite their initial 4-2-3-1, is very fluid. The fullbacks normally maintain width while the wingers drift inside. The front four is perhaps the most fluid section of their structure, naturally flowing and interacting with each other. Obviously, individual characteristics naturally lead to certain patterns such as David Neres occasionally drifting wide to attack space. In the midfield, the double pivot is extremely coordinated, always moving as one. 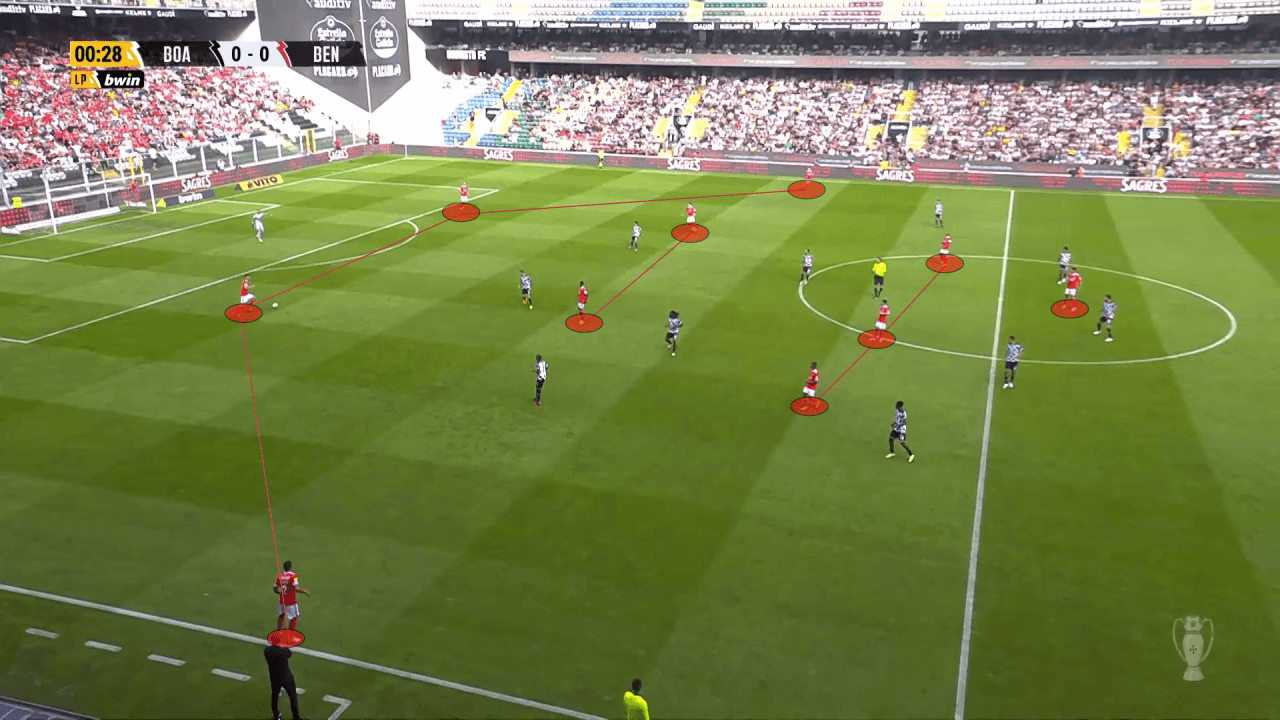 Benfica’s most significant characteristic is their dominant and controlled approach. The Encarnados have averaged 59.3% possession with 598.25 passes per 90. Additionally, only 5.69% of their passes are long passes, further highlighting this controlled style of possession. Although their passing distance is short, it is done at a very high tempo of 18.76.

This strategy begins with ensuring a smooth construction phase. Before understanding how they approach this phase, it is important to look at their structure. The centre-backs split beside Vlachodimos and the fullbacks remain wide while still providing support. Most significantly, though, is the role of the double pivot. Florentino and Fernández are the heart of possession, always moving together. 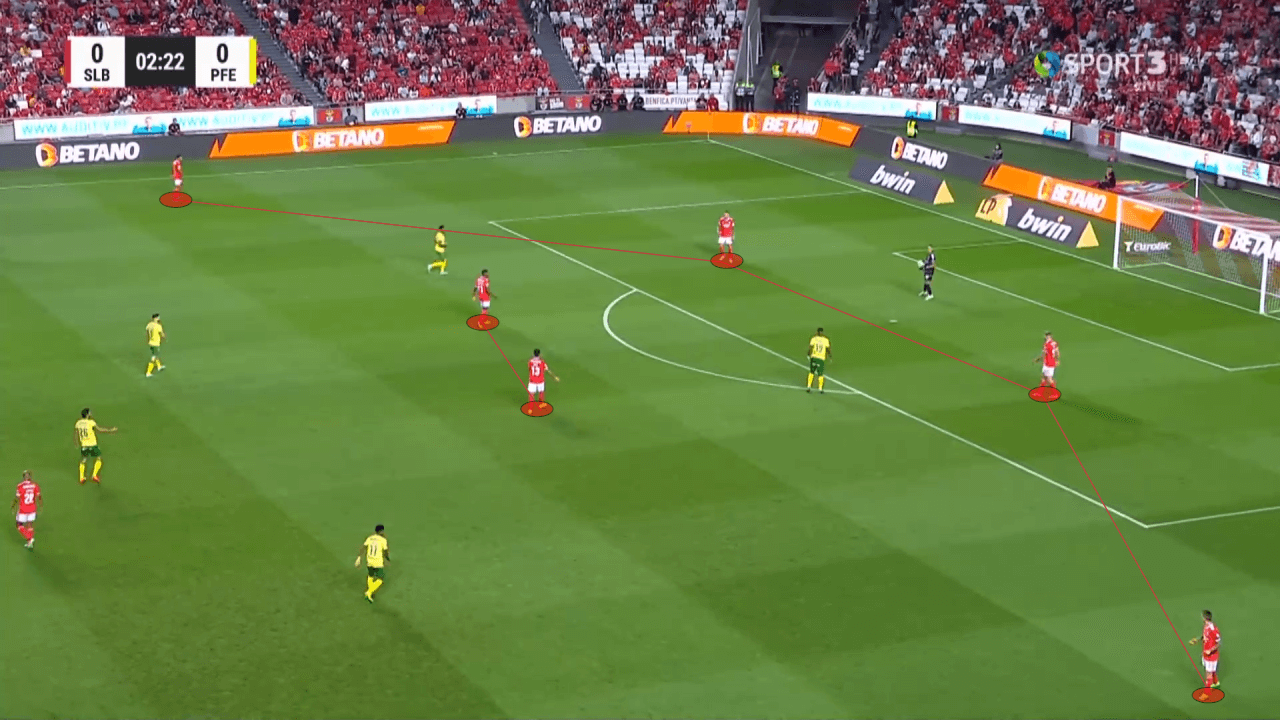 Maintaining numerical superiority around the ball is one of their key principles in this phase. In order to ensure this, the double pivot may drop into the box at times. For instance, when three players lead Midtjylland’s press, the duo drop to create a 5v3 superiority. With intelligent movement, body positioning, and passing, they are able to exploit this advantage and progress forward. 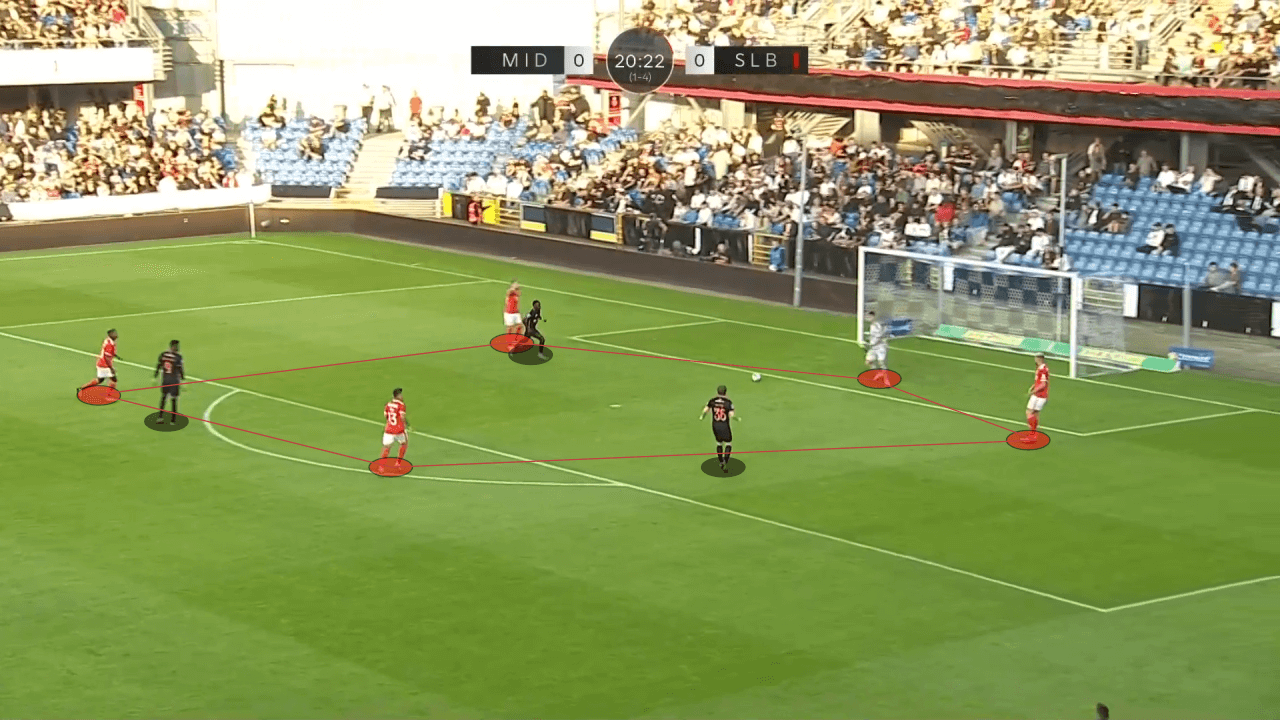 A double pivot is especially effective when building through the sides. Being able to support either side, Benfica tend to create superiority in these areas in order to advance forward. This superiority may not be necessarily numerical, but also positional. With conscious positioning and support, the players create triangles and diagonal passing lanes around the opposition. 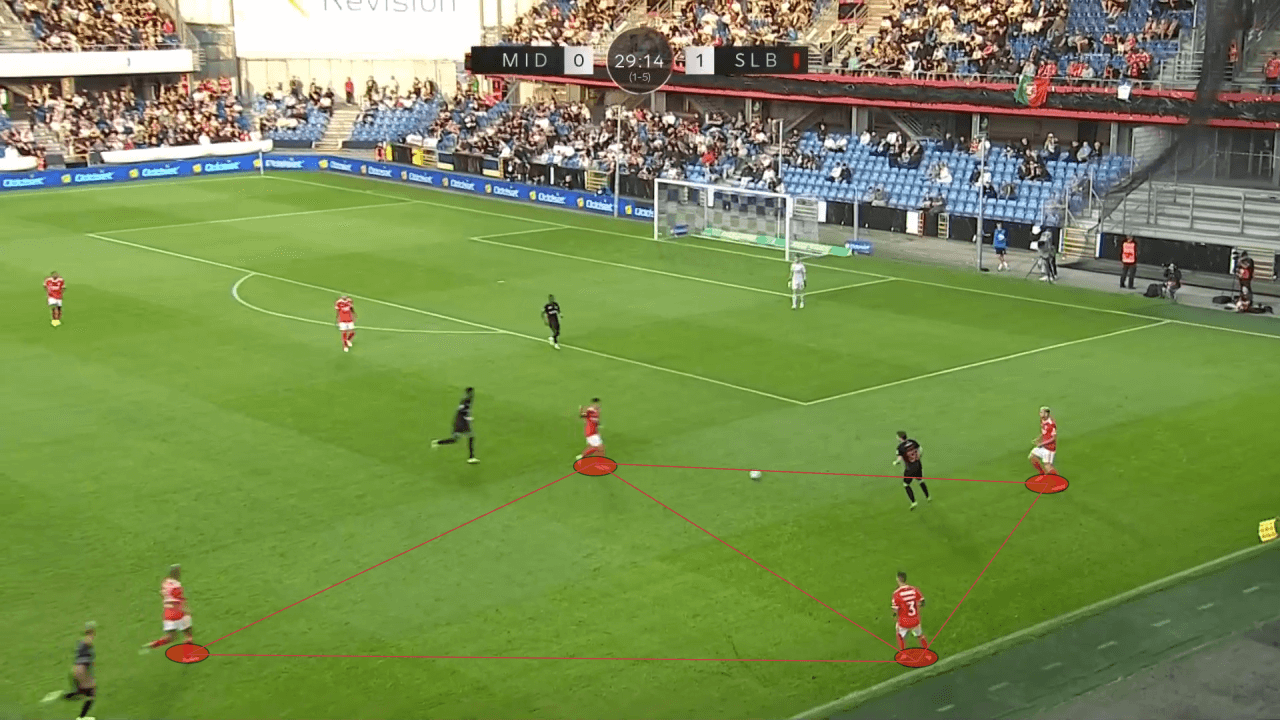 On the other side, we are able to see a more specific example of this. Midtjylland match Benfica’s numbers in this section, yet they are still able to play out. As Florentino receives the ball, players are supporting from diagonal angles and creating passing lanes. 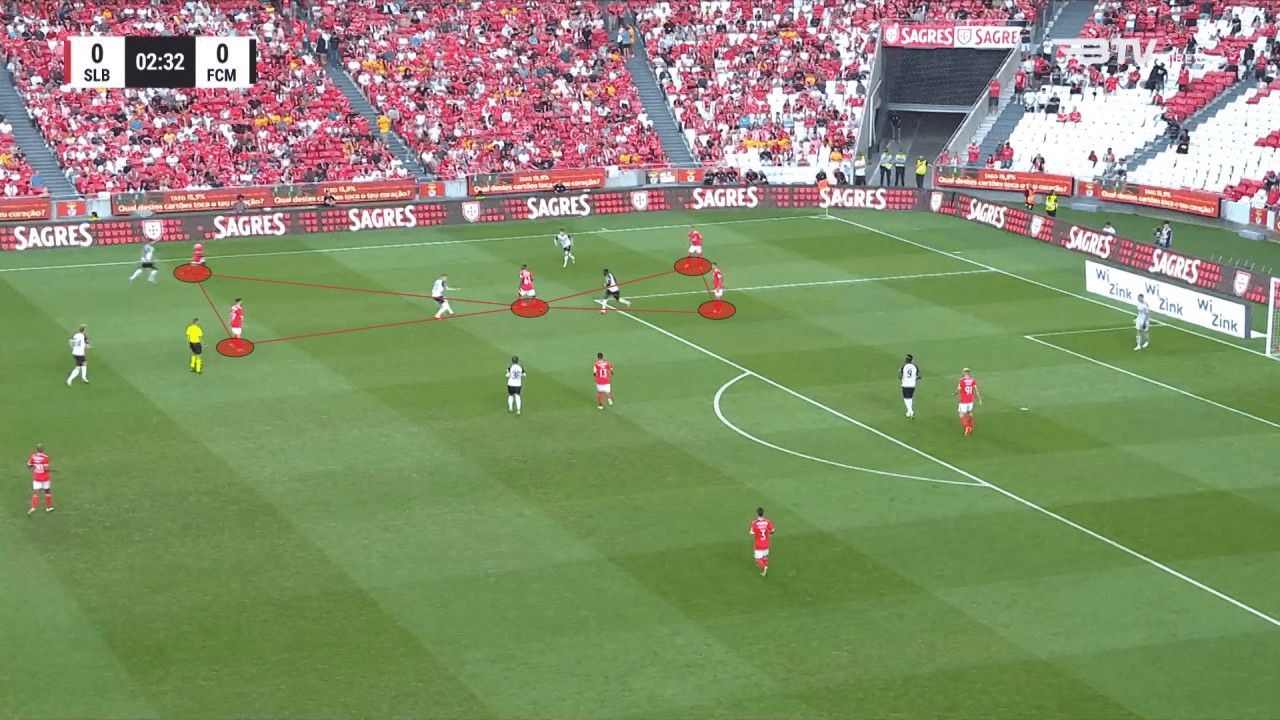 With this structure, they are able to retain possession and connect passes until space to progress is available. For instance, they are able to play out of a tight space on the wide channel before Enzo completes a progressive pass to Rafa, who creates a diagonal passing lane within the defensive organisation. 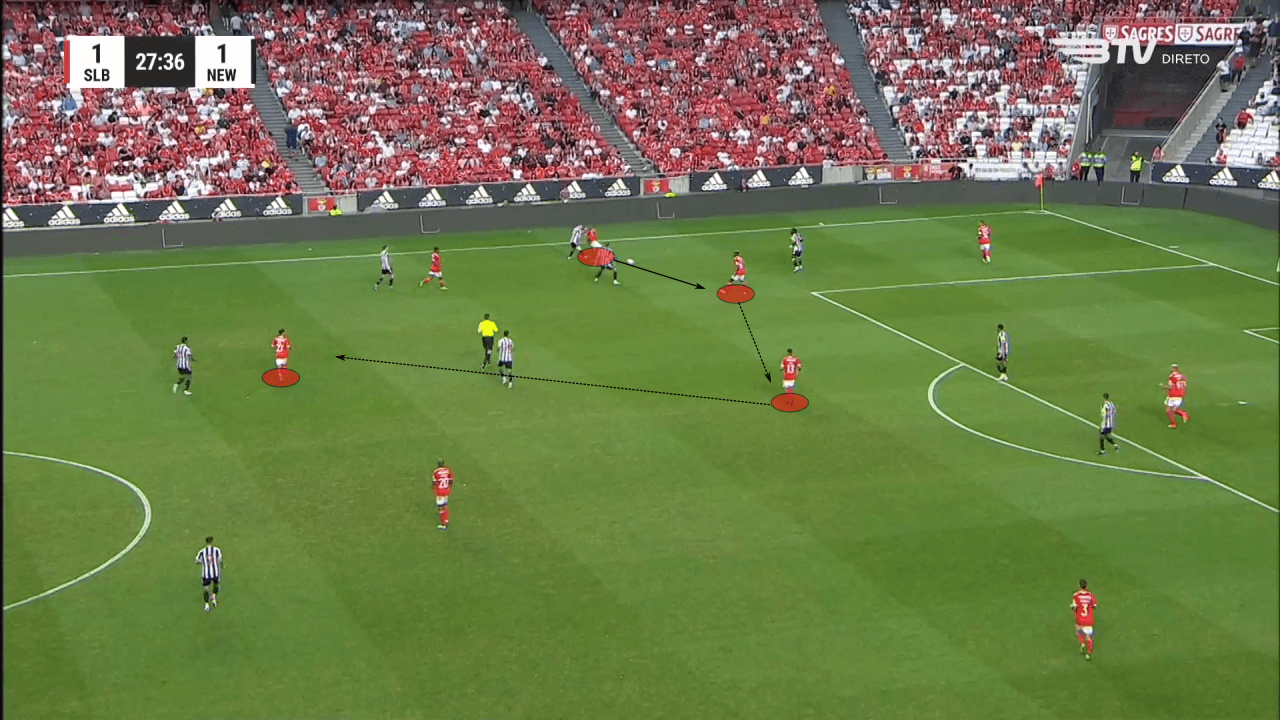 In addition to the advantages highlighted, this strategy also allows for dangerous switches of play. In order to match Benfica’s numbers and overwhelm them, Dynamo Kyiv commit a total of seven players to that section of the pitch. Realising this, Benfica quickly switch to the other side where they are able to freely progress forward. 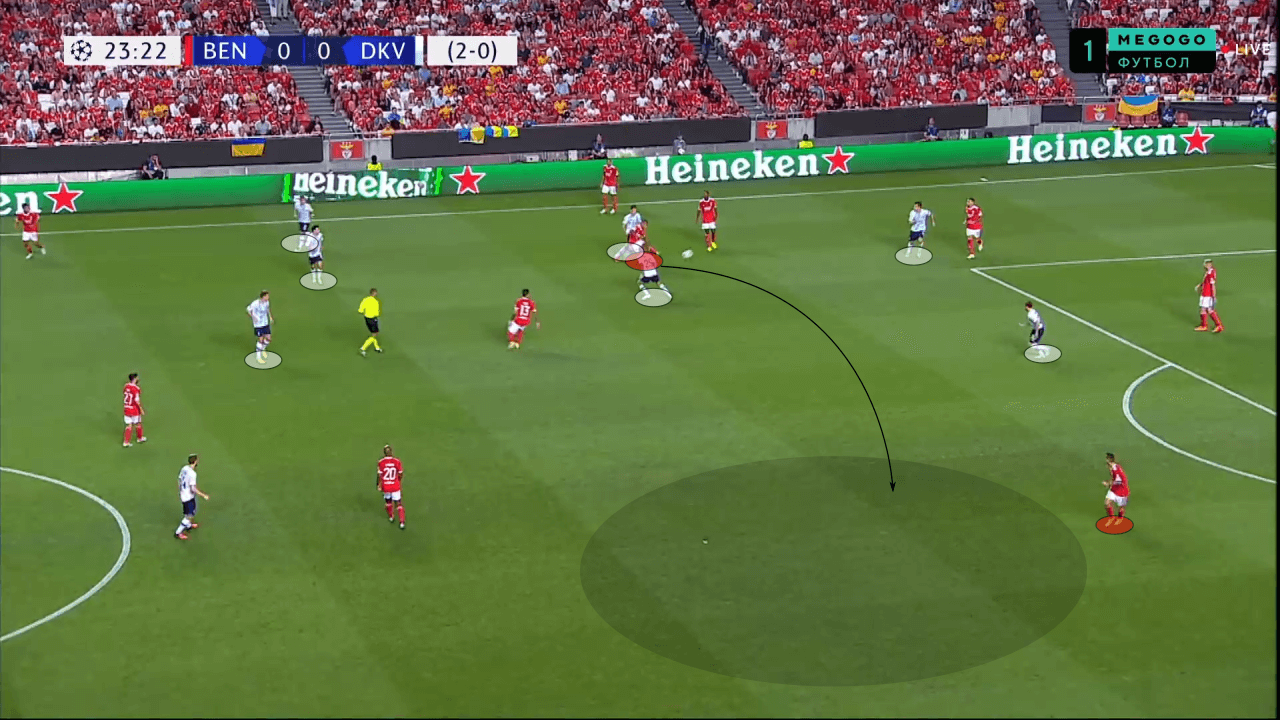 At the heart of Benfica’s possession is Enzo Fernández. The 21-year-old signing from River Plate has averaged 91.49 passes per 90 at Benfica, with a 91.2% completion rate. The Argentinian is extremely efficient at dictating the tempo and retaining possession. Pairing him with Florentino Luís, Roger Schmidt has a balanced and effective midfield.

In the middle third, this midfield is incredibly important in progressing from the initial third into the final third with efficiency. They are able to impose themselves and pin the opposition in their half with relentless possession.

We can begin examining their work in this phase through their structure, which can be divided into two sections. First, the double pivot will support the backline in initiating these attacks and retaining possession. Further ahead, the front four will float within the defensive organisation in order to find spaces to receive the ball. 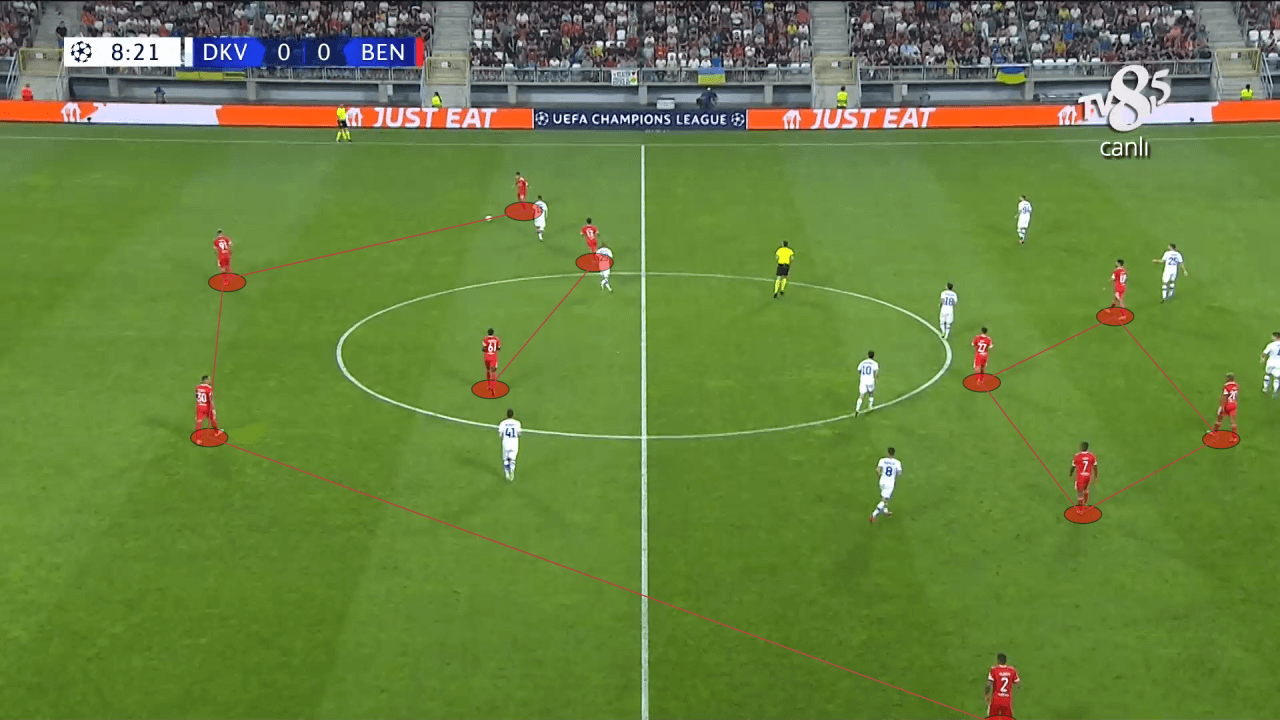 It is a combined effort from both sections, but the front four’s movement is especially significant. Responsible for finding spaces in between lines and creating passing lanes to progress forward, their success in possession lies heavily in their movement. In the instance below, Rafa drifts in between the two defensive lines to receive a pass from Enzo. 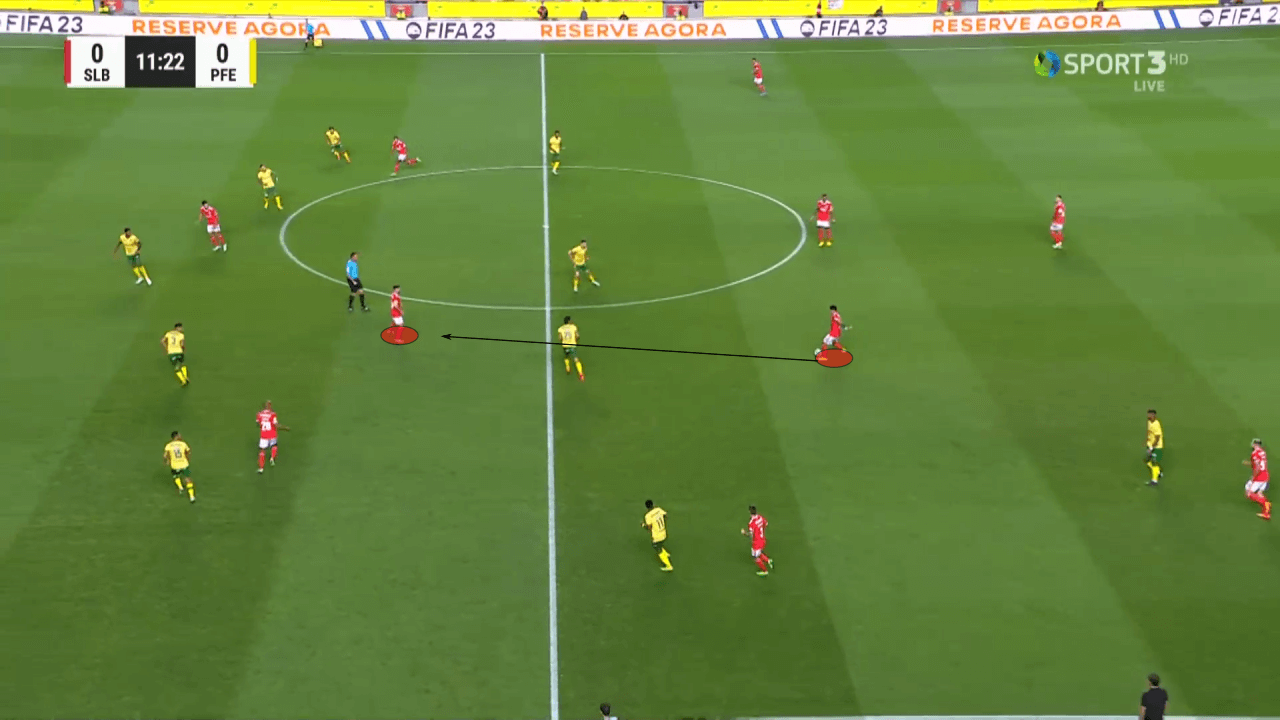 As mentioned, Enzo Fernández is a key factor in progressing through the zones successfully. The midfielder is able to find line-breaking passes and connect with his teammates within the defensive organisation with ease. In this season’s Liga Portugal, he averages 10.99 progressive passes per 90. 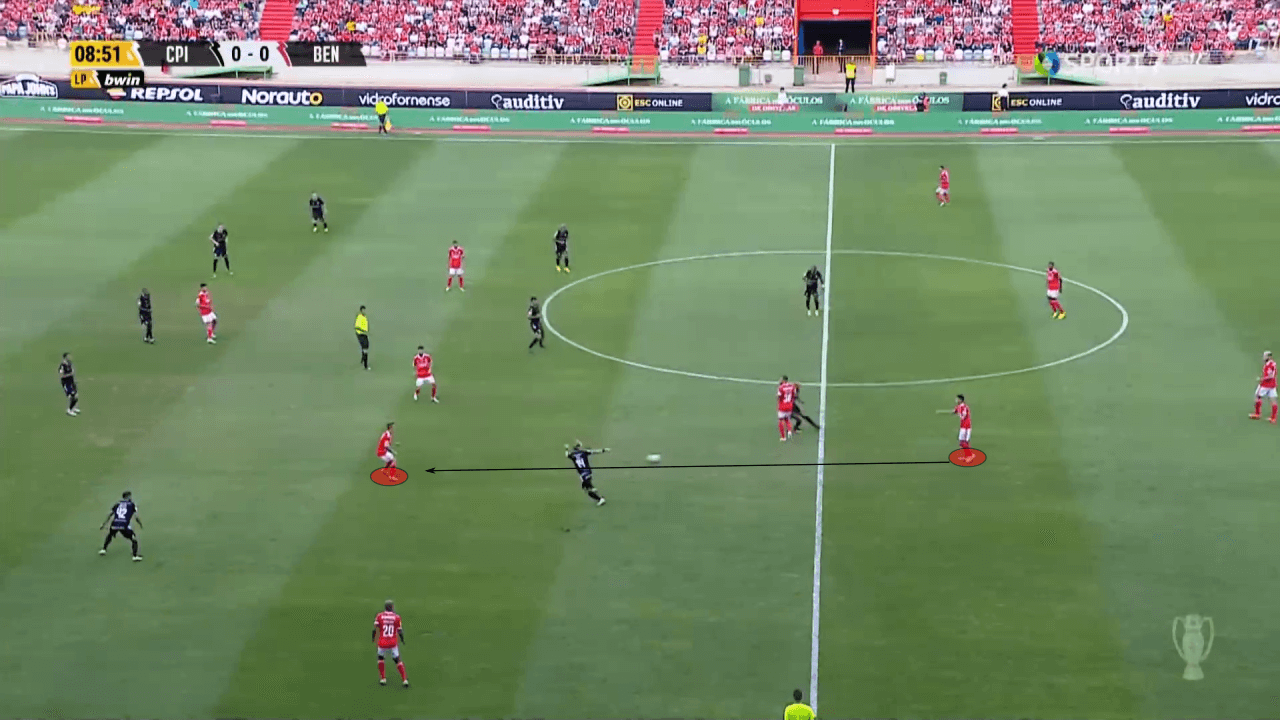 The 21-year-old also has an impressive passing range. In addition to the line-breaking passes previously explored, he is able to find his teammates all over the pitch. In the example below, he plays a long pass to David Neres behind the defensive organisation. The accuracy and weight of these passes are especially impressive. 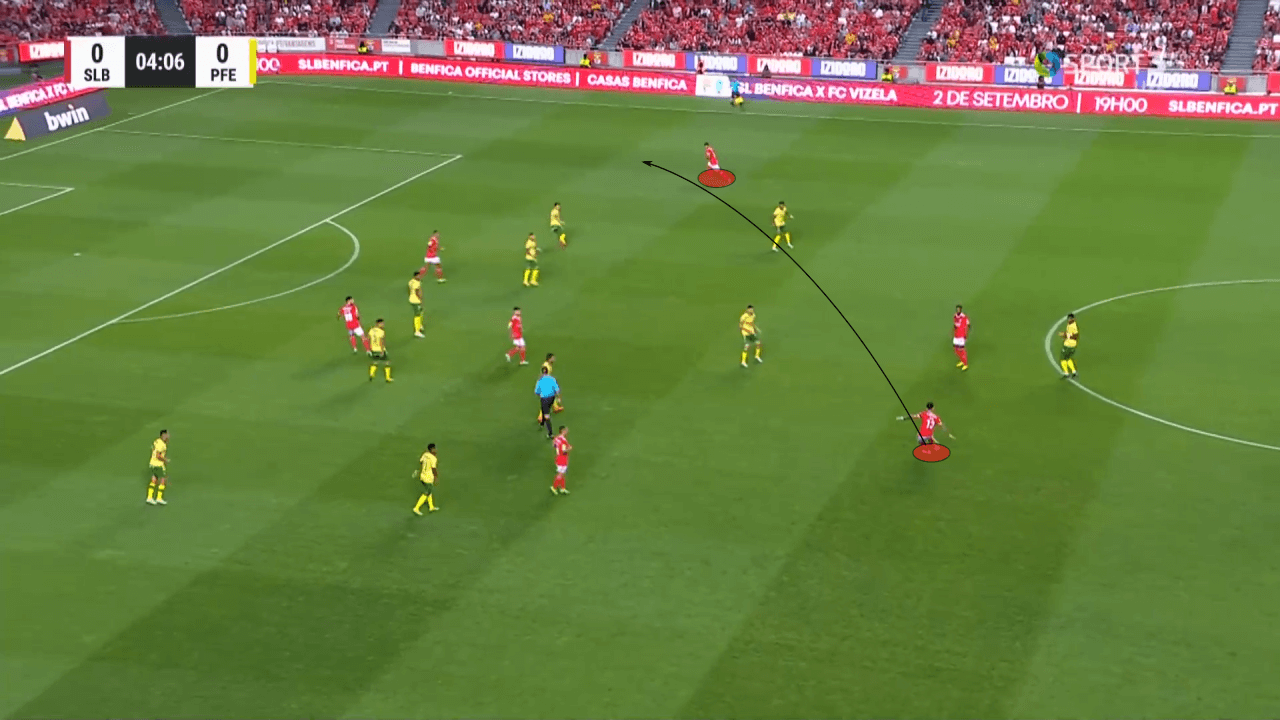 In the final third, there are a couple of mannerisms through which Benfica are able to create chances. Under Schmidt, they have averaged 2.28 xG per 90 from 15.33 shots per 90. While this is an impressive number of shots, it is not extremely high, especially when considering how high their xG per 90 and average possession figures are.

In other words, Benfica are efficient. They are extremely patient with the ball, constantly moving it around until space opens up. As a consequence, they are able to create very high-quality chances and average such a significant xG per 90 figure.

One of the most common methods of creating chances is through combinations. As mentioned, the front four are extremely fluid. Within the defensive organisation, they are able to interact and combine with each other in order to create chances. For instance, after receiving a pass in between defensive lines, Rafa immediately plays João Mário who plays him back into space. 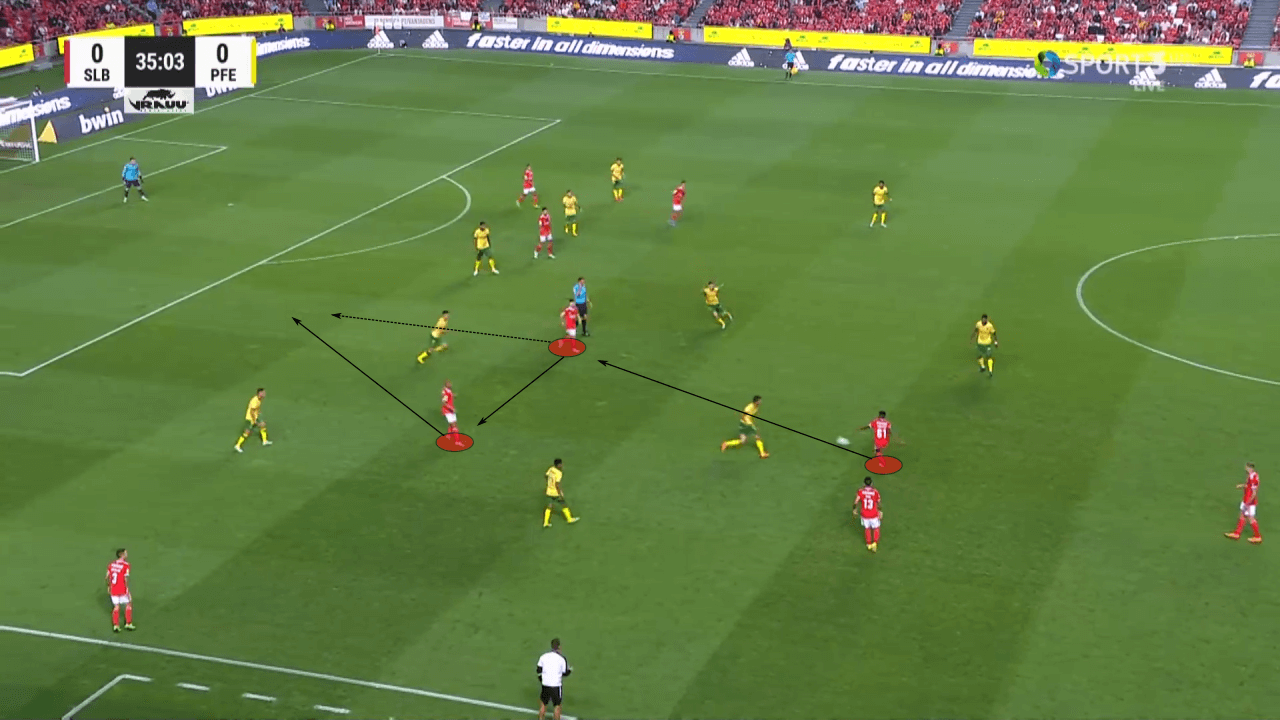 In this other example, João Mário plays a backheel to Rafa after receiving it from Grimaldo. Rafa immediately plays João into the space behind the backline. These sorts of combinations are extremely effective, especially when they come in such a natural and spontaneous way. 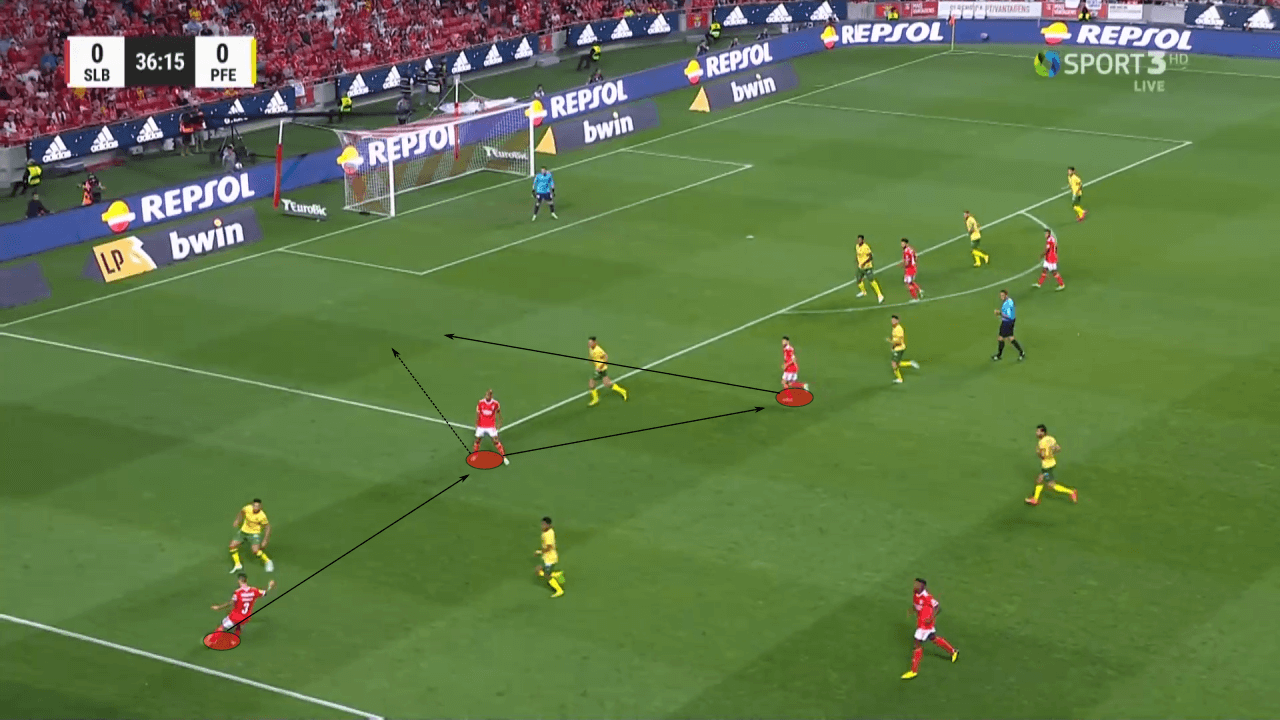 In addition to combinations, the attacking players are able to interact through their movement. In the instance below, João Mário makes a run into the wide channel in order to drag the opposition fullback and create space for Rafa to receive. 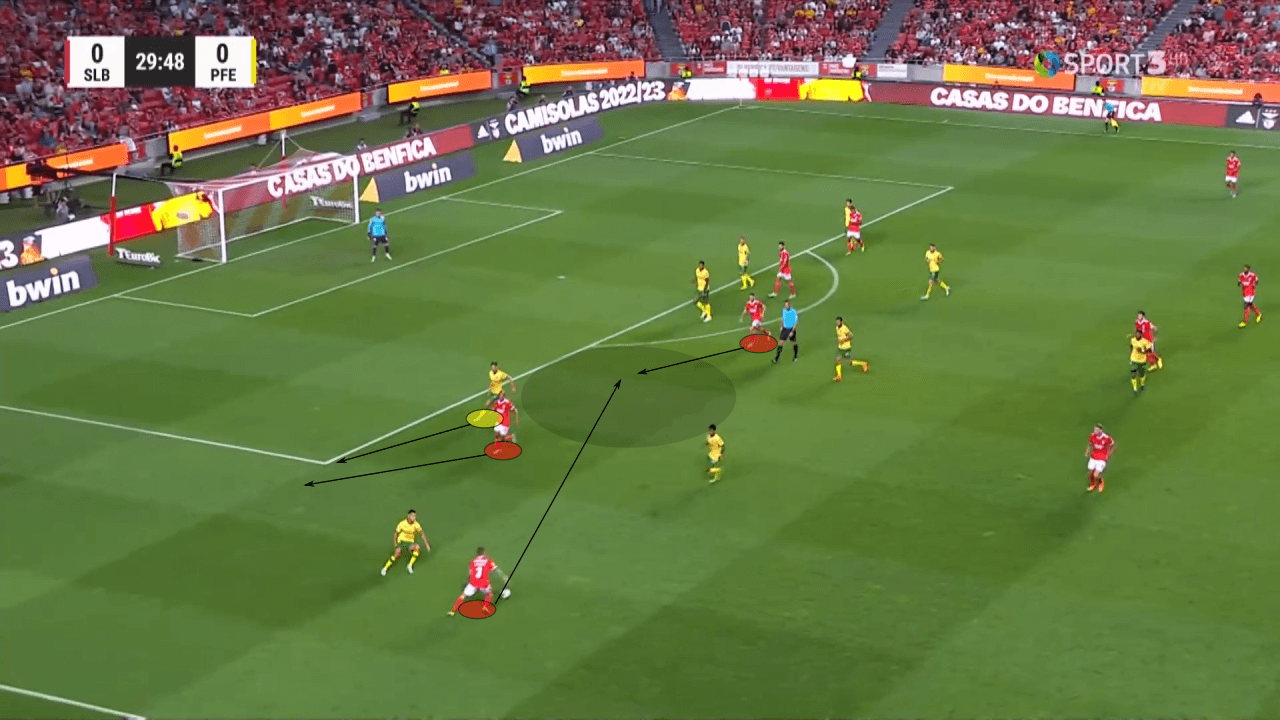 Alejandro Grimaldo, who was heavily linked with Man City over the summer, is a special weapon in the final third. The attacking fullback has a very good crossing ability and is constantly able to reach his targets in the box. In the example below, he plays a low cross to Ramos, who is able to lay off João Mário for a shot. 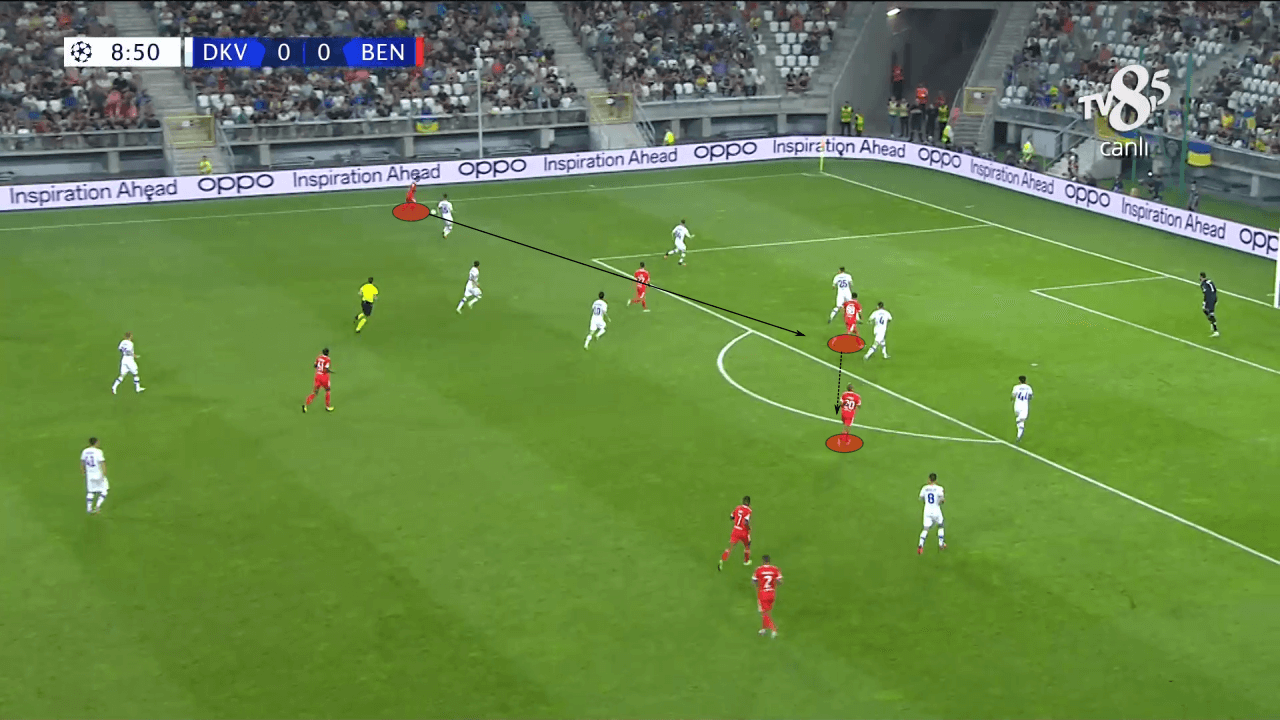 Finally, the Encarnados are able to create through individual talent. Especially through David Neres, they are able to take advantage of 1v1 situations and create danger from it. As a consequence of this individual ability, David Neres tends to drift wide where he can maximise the space and time he has on the ball. In the example below, he faints left before driving down the line on his right. 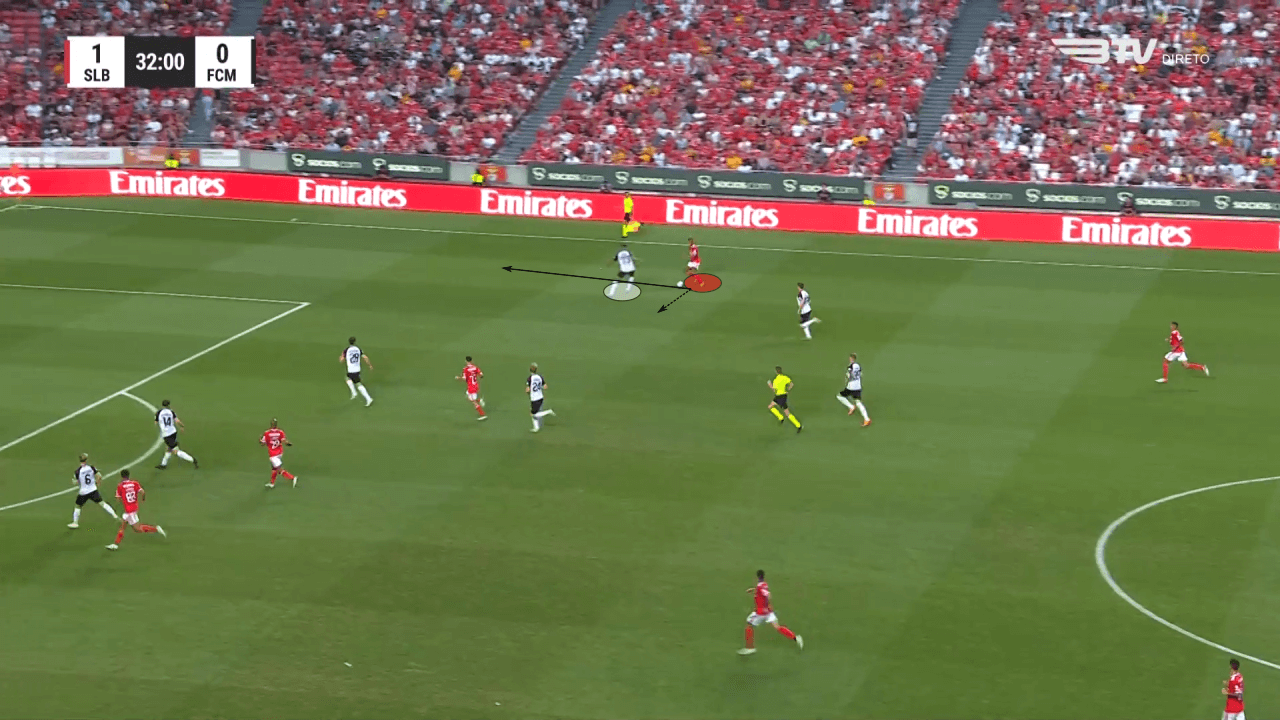 With such dominant tactics, Benfica have not done much defending under Schmidt. The Portuguese giants have only conceded 0.76 xG per 90 from 6.33 shots per 90. There is not a high volume from the opposition, and this is entirely due to their effective high pressing. In 2022/23, they have only averaged 7.95 PPDA. Additionally, they have the highest challenge intensity in the league with 7.7 duels, tackles, and interceptions per minute of opponent possession.

This relentless defensive system begins with the front two. Without the ball, Rafa steps up to join Ramos and form a 4-4-2.  These two players have the most significant role in their high press. First, once the opposition plays it to a side, the nearest forward is responsible for splitting the pitch in half and initiating the press. Meanwhile, the other forward is responsible for tucking in and marking one of the midfielders. 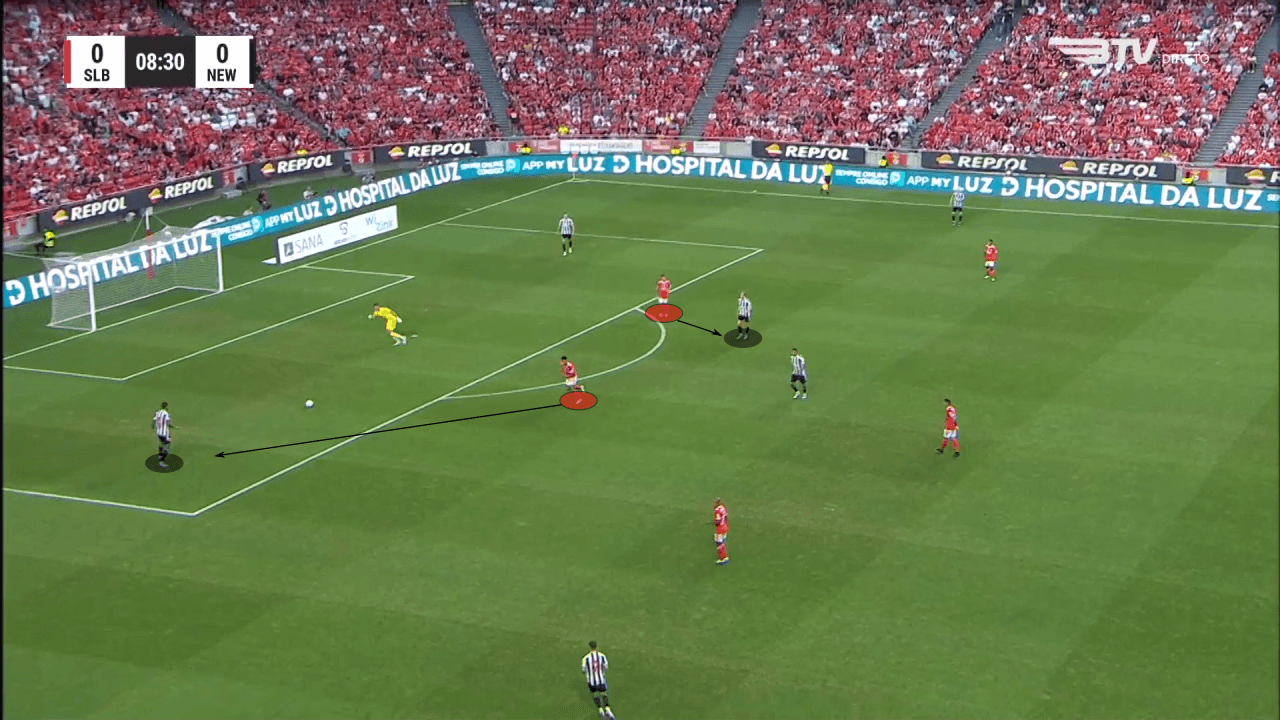 By doing this, they are able to split the pitch in half and congest the opposition’s playing area. Additionally, this allows them to deploy an aggressive man-marking system and match the opposition for numbers. 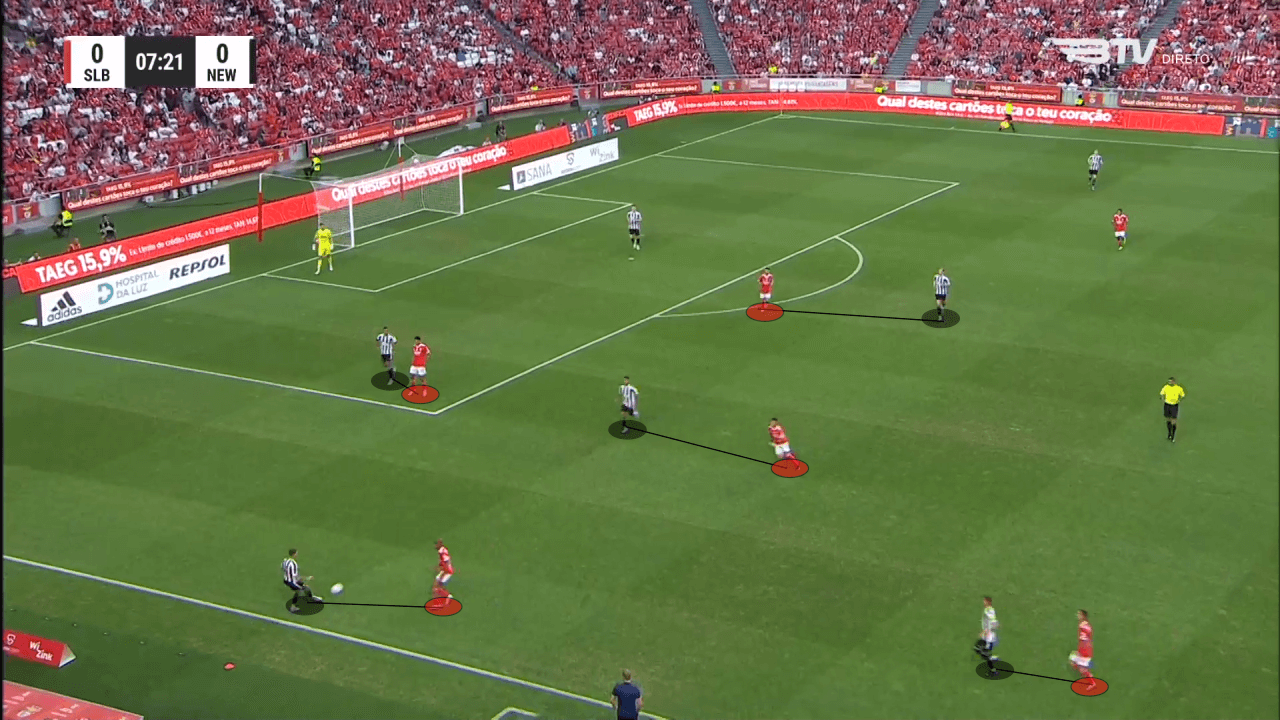 In lower sections, they drop into a more compact 4-4-2 block. While ensuring organisation and limiting the spaces, they maintain a very high aggressiveness, constantly challenging for the ball and limiting the opposition’s time on the ball. 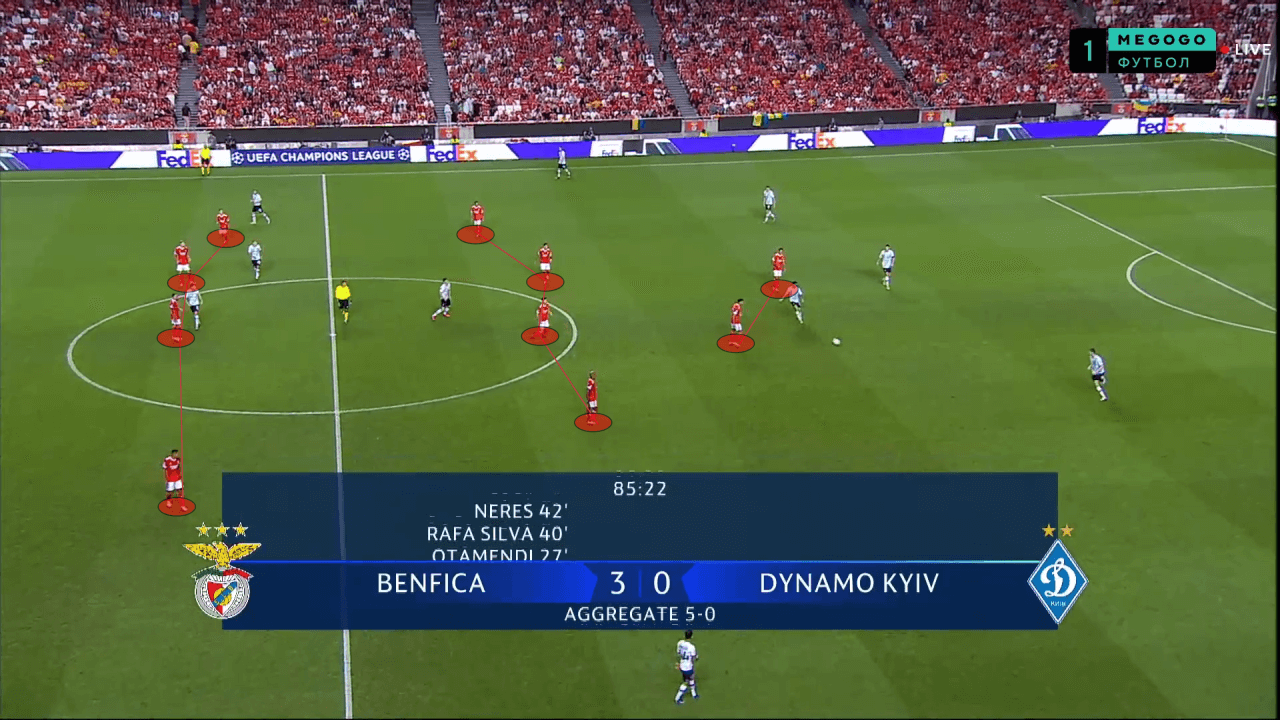 Benfica have been extremely entertaining to watch under Roger Schmidt. The German manager has introduced dominant tactics which ensure a controlled approach to all phases of possession. When defending, they are extremely aggressive without allowing the opposition a lot of chances. In addition to interesting tactics, they have an extremely talented and promising squad. With the UEFA Champions League beginning this week, they are certainly a team to watch in the competition.