The role of a centre-back has gradually evolved over recent years. From only being the rock at the heart of the defence who would put out fires and deal with any threats, a centre-back is now fundamental to his team’s general build-up play and sustaining of attacks. Joško Gvardiol, RB Leipzig’s 20-year-old left-footed Croatian centre-half, has burst onto the scene during his first season in the Bundesliga. He has quickly become renowned for his outstanding quality on the ball.

While at Dinamo Zagreb during the 2020/21 season, it was announced that Gvardiol, 18 at the time, had signed for RB Leipzig for €16 million but would continue the season on loan in Zagreb. The fee was the highest ever for a Croatian teenager the third-highest ever paid for a Croatian defender, only behind Dejan Lovren and Duje Ćaleta-Car.

In his 2021/22 debut Bundesliga season, the youngster seamlessly adapted to life at the highest level and secured his spot on the left of a back three in Leipzig’s 3-5-2 formation. He made 29 league appearances and helped the team win the DFB-Pokal and reach the Europa League semi-finals, accomplishing both feats for the first time in the history of the club. Head coach Domenico Tedesco hailed the centre-back’s “mental strength” as among his chief attributes:

“As a young player, it was important to come to a club that can help me take the next step in my career. That is exactly what RB Leipzig is all about. The club has shown several times how players can develop and improve here” Gvardiol declared.

Gvardiol’s quality and potential are attracting attention from top clubs, especially in the Premier League. The 20-year-old has been subject to some transfer speculation across the 2022 summer window. A swap deal with Timo Werner that would see him go to Chelsea has been discussed, but nothing seems imminent at the moment.

This tactical analysis and scout report highlight Gvardiol’s key attributes and why he has become pivotal to Leipzig’s tactics and style of play in only one season at the club. The analysis also looks at what the Croatian’s future holds and whether it’s the right time to seek pastures new.

At only 20 years of age and after one season on the grandest stage, Gvardiol has cemented himself as one of the best young centre-backs in the world. His ball progression, passing range, dribbling skills, 1v1 defending and no-nonsense nature are some of his main features.

At Leipzig, he operates on the left of a back three and is encouraged to take up high and wide positions when his team are in possession, highlighted in the below heat map from the 2021/22 season.

Gvardiol has 10 caps for the Croatian national team, with his four starts all coming from left-back. His impressive performances at Dinamo Zagreb earned him a call-up to the Euro 2020 squad last summer.

Gvardiol averages around 1.81 progressive runs and 70 passes per 90, with 86% pass accuracy. He also isn’t afraid of making those passes under pressure, ranking 5th across the Bundesliga and 1st in his Leipzig team for this metric.

Gvardiol completes 1.4 successful dribbles and takes 1.3 touches in the opposition box per game, highlighting his natural instinct to support his team during attacks.

On the other end, he has impressive numbers in tackles and interceptions, ranking in the 90th and 87th percentile respectively. The young defender wins 1.9 tackles and makes 3.22 interceptions per 90. He does not engage in many aerial duels – 3.51 per game – and manages to win them 57.6% of the time.

Gvardiol is nowhere near a traditional centre-half. His main strength and responsibility at Leipzig is advancing the ball and setting up his team into dangerous areas up the pitch. In his role, Gvardiol is tasked with progression and constantly bringing the ball out of defence in a bid to connect with his wingback or midfield pivot. He attempts 15.05 progressive passes per 90 minutes.

When Gvardiol receives the ball during the build-up, it serves as a trigger for his teammates to make runs in behind, knowing that he has the ability to locate them in those positions. 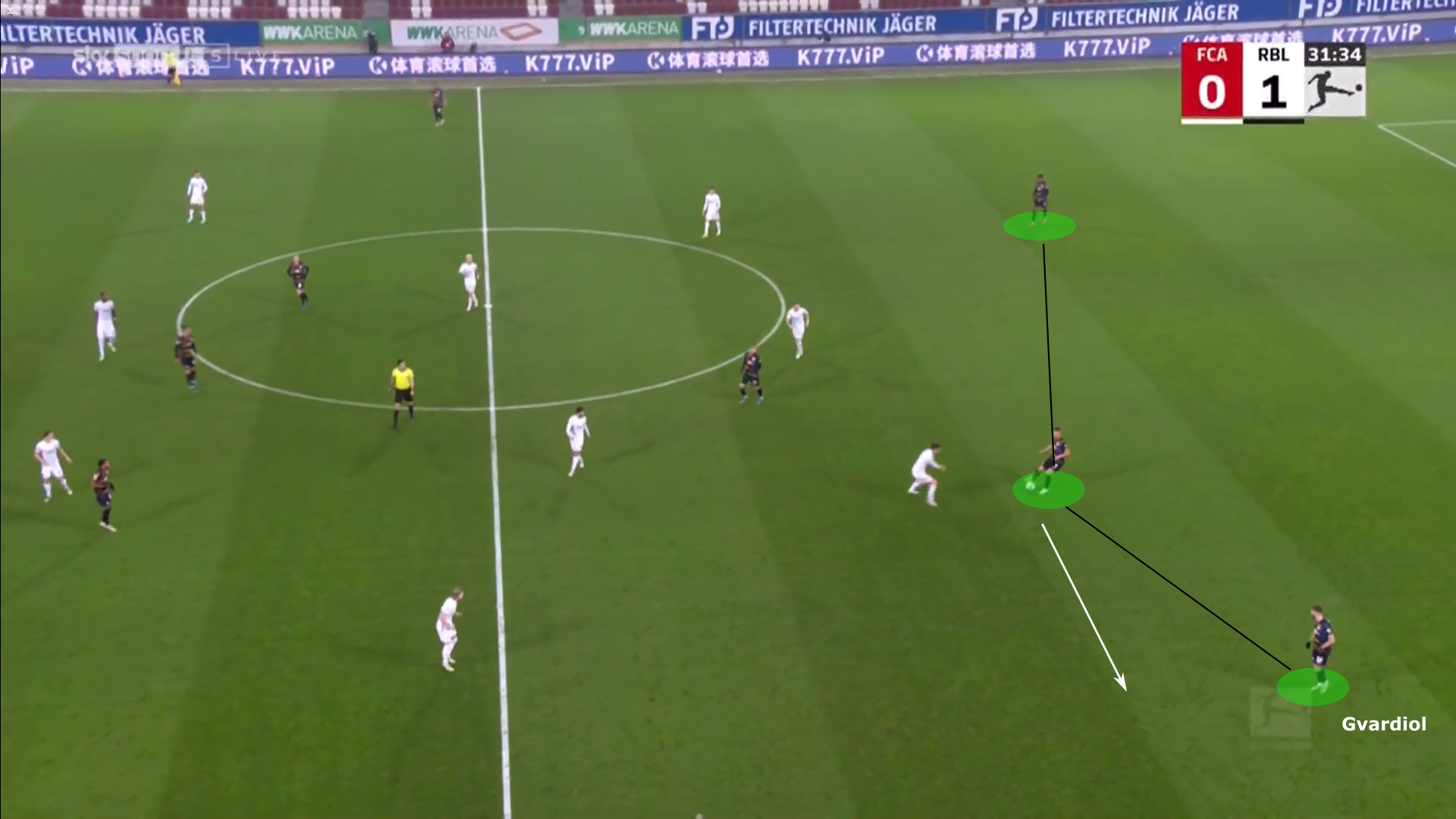 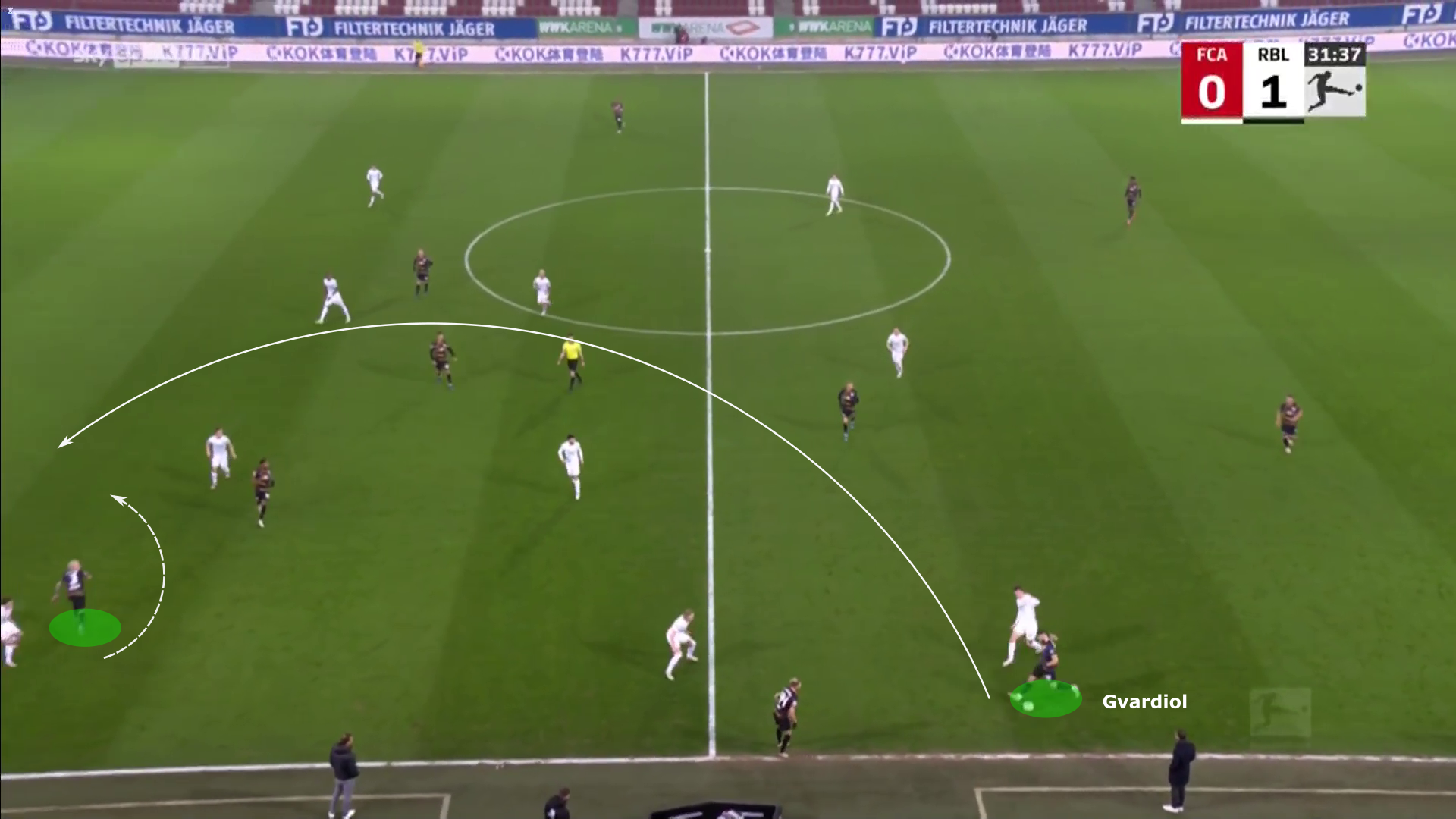 While Gvardiol has the ability to progress the ball from deep areas, he also provides some key and dangerous passes into the final third when he is higher up the pitch. The bulk of his pass progression by volume comes from the middle third.

The highly-rated defender scored two goals and supplied two assists last season, with one of them coming against Hannover. 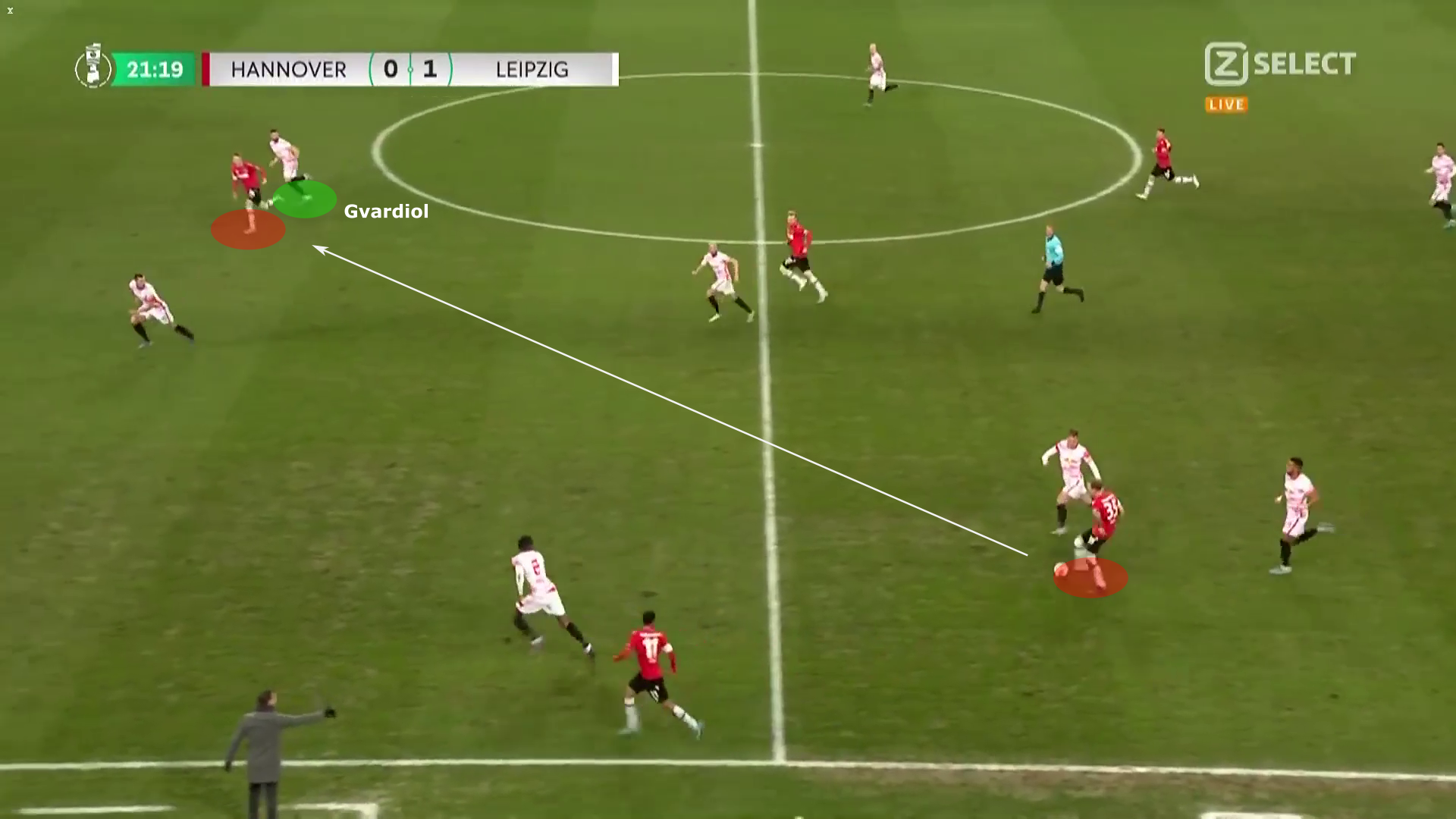 Gvardiol reads the play and intercepts the intended pass through the middle. 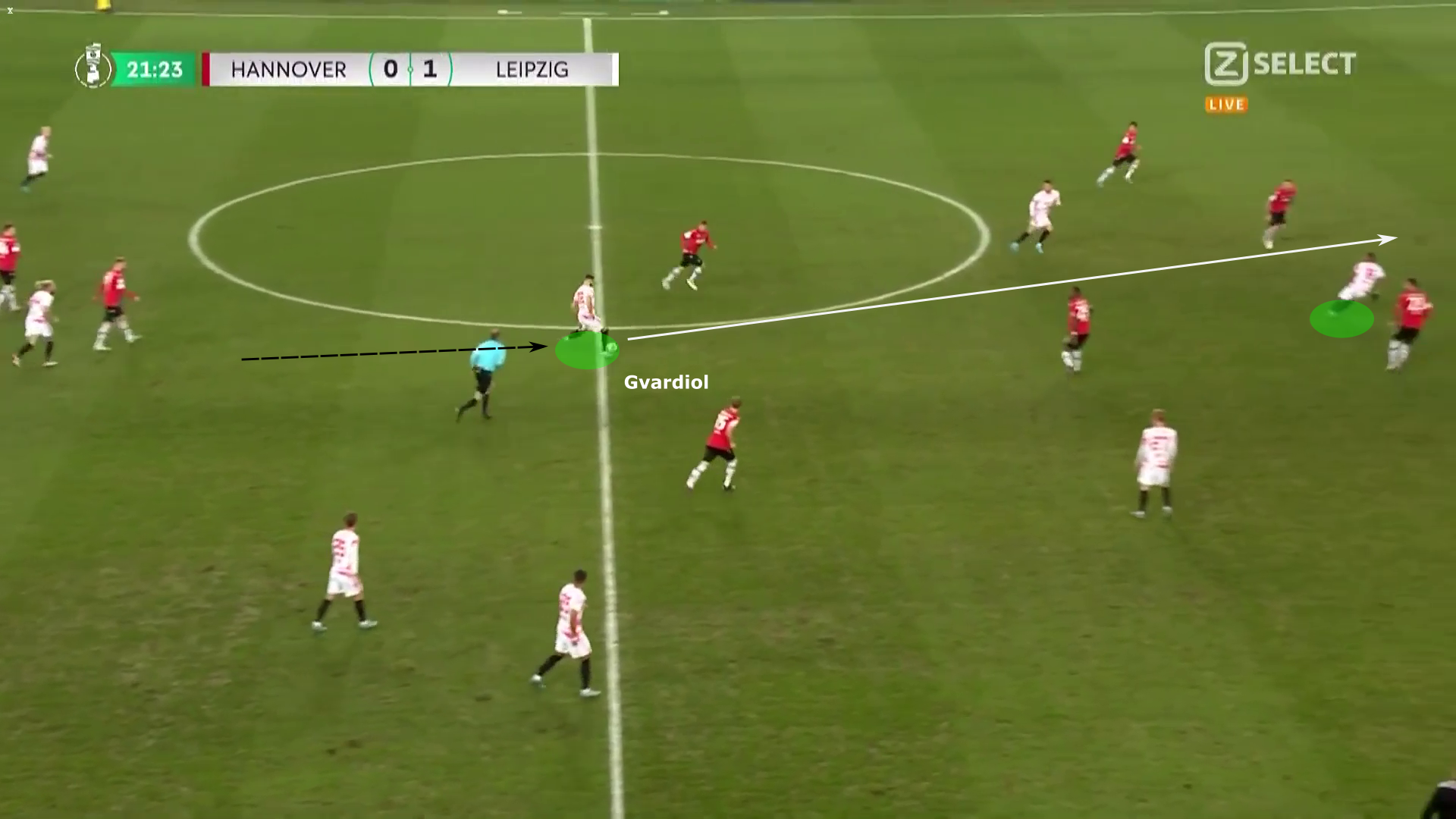 He carries the ball into midfield and threads Hannover’s back four with a through ball into his forward. 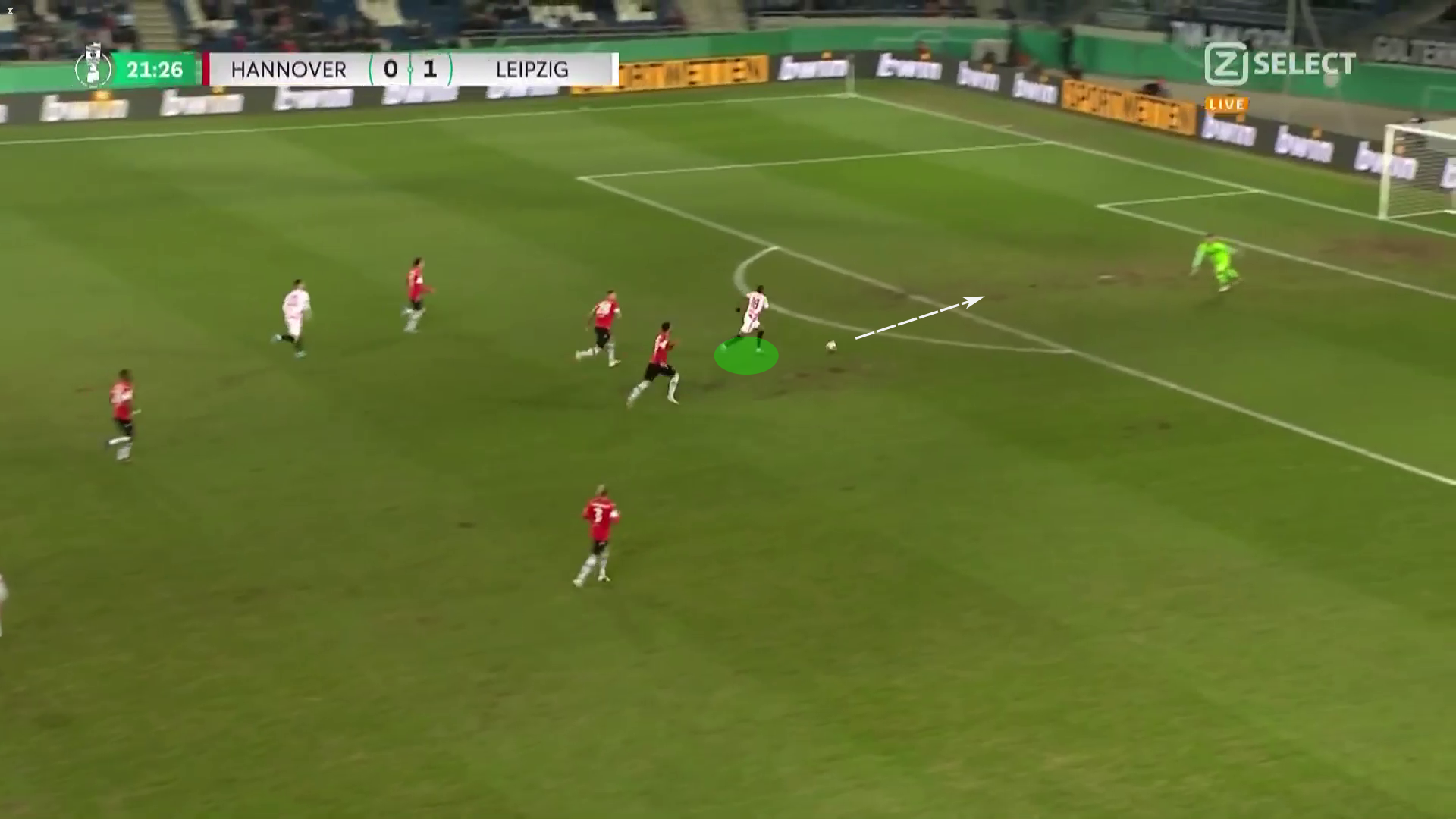 The attacker is through on goal as he rounds the keeper and scores. Gvardiol is awarded the assist.

Gvardiol ranks 1st in the entire Bundesliga for expected threat (xT) and xT from passes. Expected threat assigns credit to the preceding actions which lead to a shot or goal.

Having a natural left-footed centre-back creates out-to-in passing angles to escape pressure and advance the ball into midfield, often taking out several defenders with one pass. It allows for quick movement of play to the underloaded side. 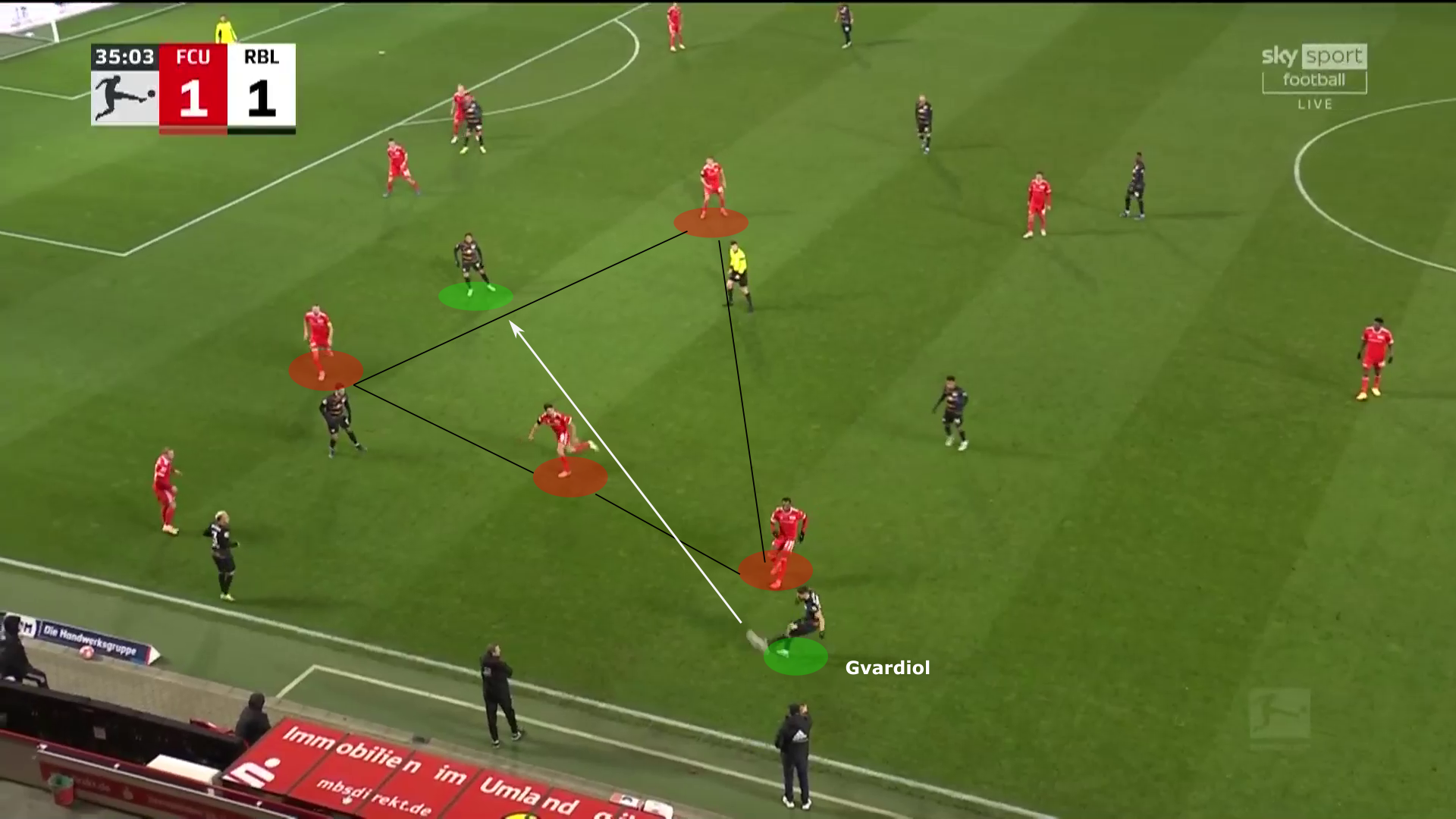 The Croatian can also go on solo runs and burst up the pitch, especially when playing at left-back. He is adept at switching the play with brilliant long balls to the forwards, rapidly getting the football into the last third of the pitch.

When compared to centre-backs in Europe’s top five leagues, the Croatian’s passing capability is made clear – he ranks in the top 3% for progressive passing distance and passes completed per 90, as well as through balls and passes under pressure per 90. 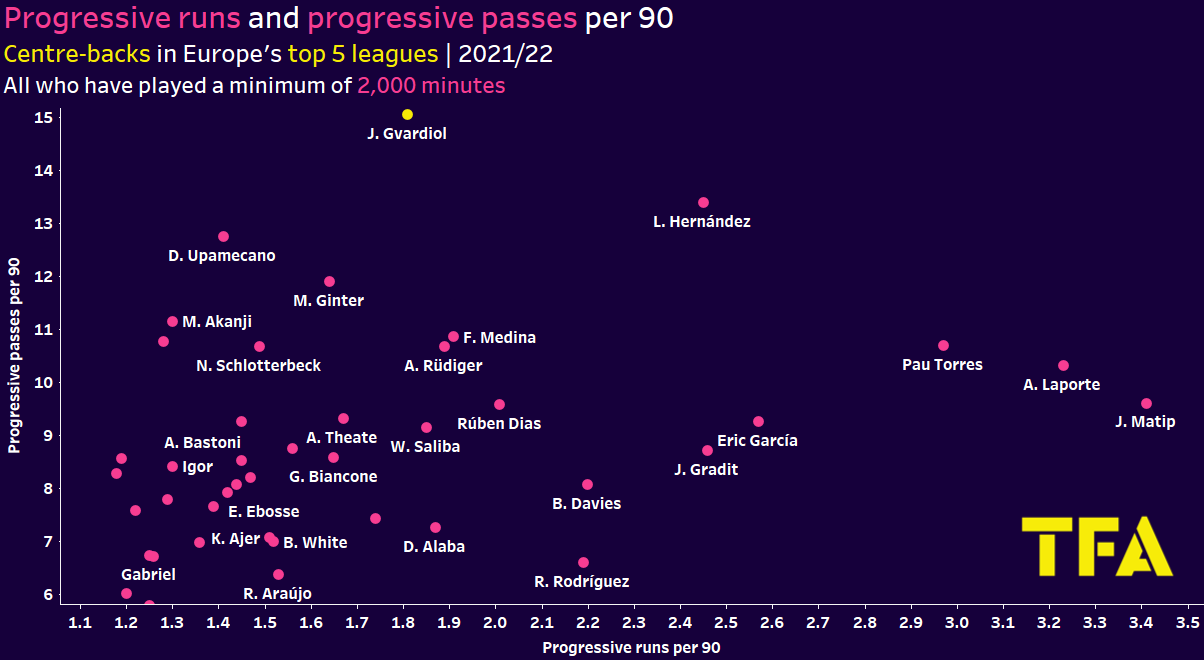 As we can see, Gvardiol ranks 1st in progressive passes per 90 among centre-backs in Europe’s top five leagues who have played a minimum of 2,000 minutes of league football in 2021/22.

When attempting this amount of passes into dangerous areas per game, there are bound to be some mistakes. Gvardiol averages 10.83 ball losses per 90 and ranks in the 82nd percentile for times dispossessed among Bundesliga defenders, an area which will improve with experience and maturity. 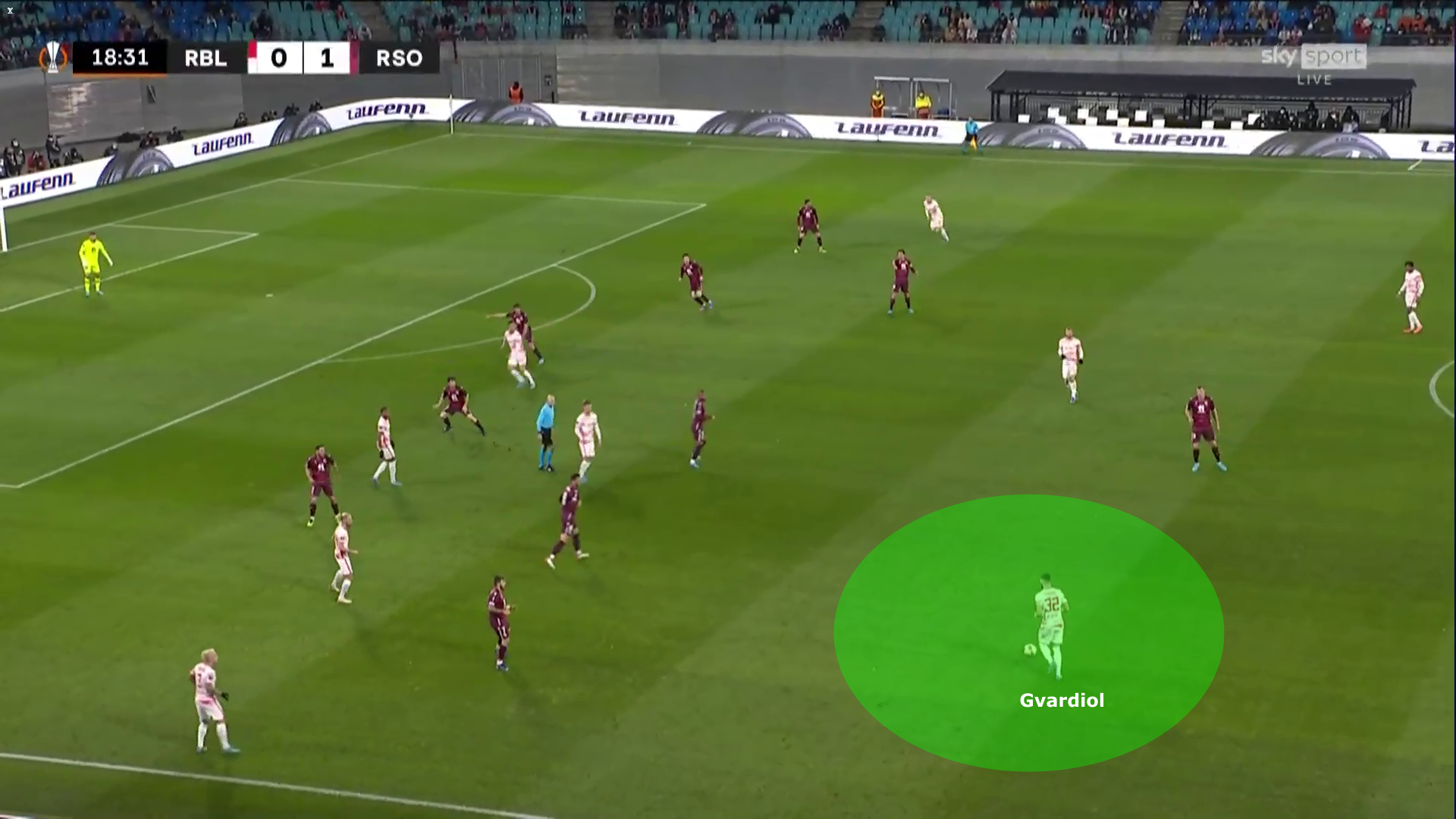 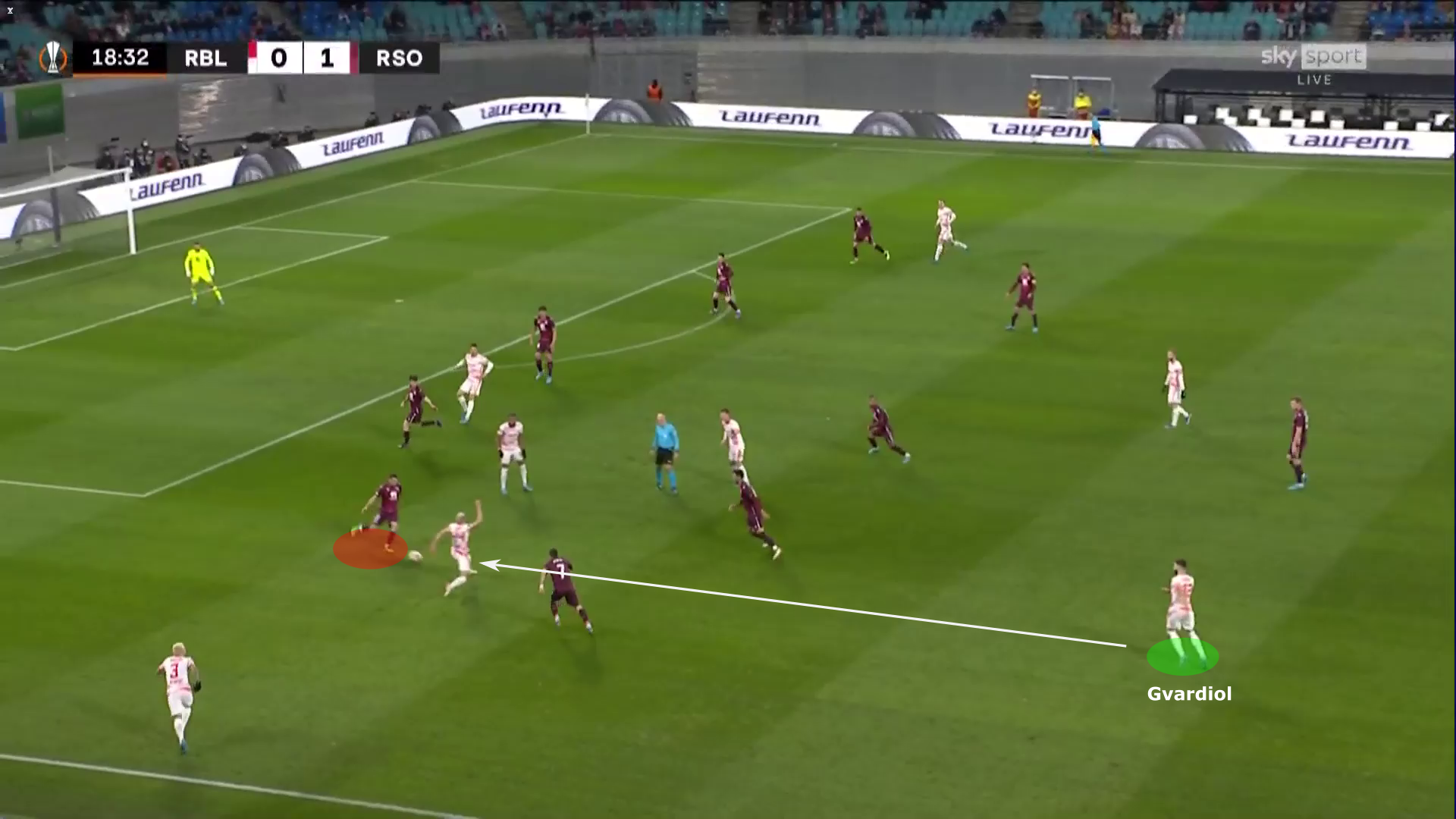 The player has the ball with time and space to pick out a teammate but ends up giving it away. These sequences usually lead to an opposition counterattack.

Gvardiol’s 99 passes attempted in Leipzig’s 0-0 draw with Frankfurt, with dominance to the left side of the pitch, highlight how involved he is in the team’s possession game and tactical setup.

As previously mentioned, Gvardiol is not an aerially dominant defender, which partially explains the preference to use him in back three where there are enough bodies to overshadow some of his weaknesses and also cover his position when he is further up the field.

The player does have an aggressive style, however, engaging in 8.11 defensive duels per 90 and winning 67.2% of his battles. 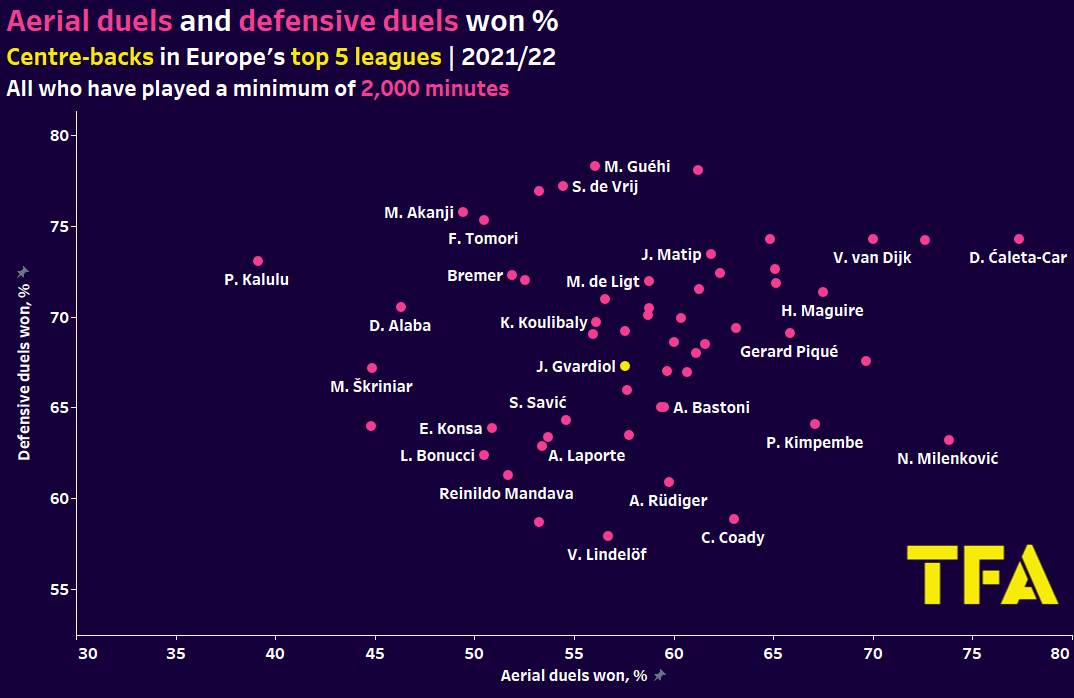 This scatter plot compares Gvardiol to centre-backs in Europe’s top five leagues who have played a minimum of 2,000 minutes of league football, in terms of aerial duels won % vs defensive duels won %. While not at the top of the pile, Gvardiol’s stats are encouraging bearing in mind he is still only 20. Most of the names mentioned in alongside him are seasoned veterans at the peak of their game.

Most of his defensive work comes in the central and left areas of the defence. He has a knack for pressing higher up the left wing when the time is right for interceptions and recoveries. Gvardiol ranks in the 91st percentile in pressure success among Bundesliga centre-backs. 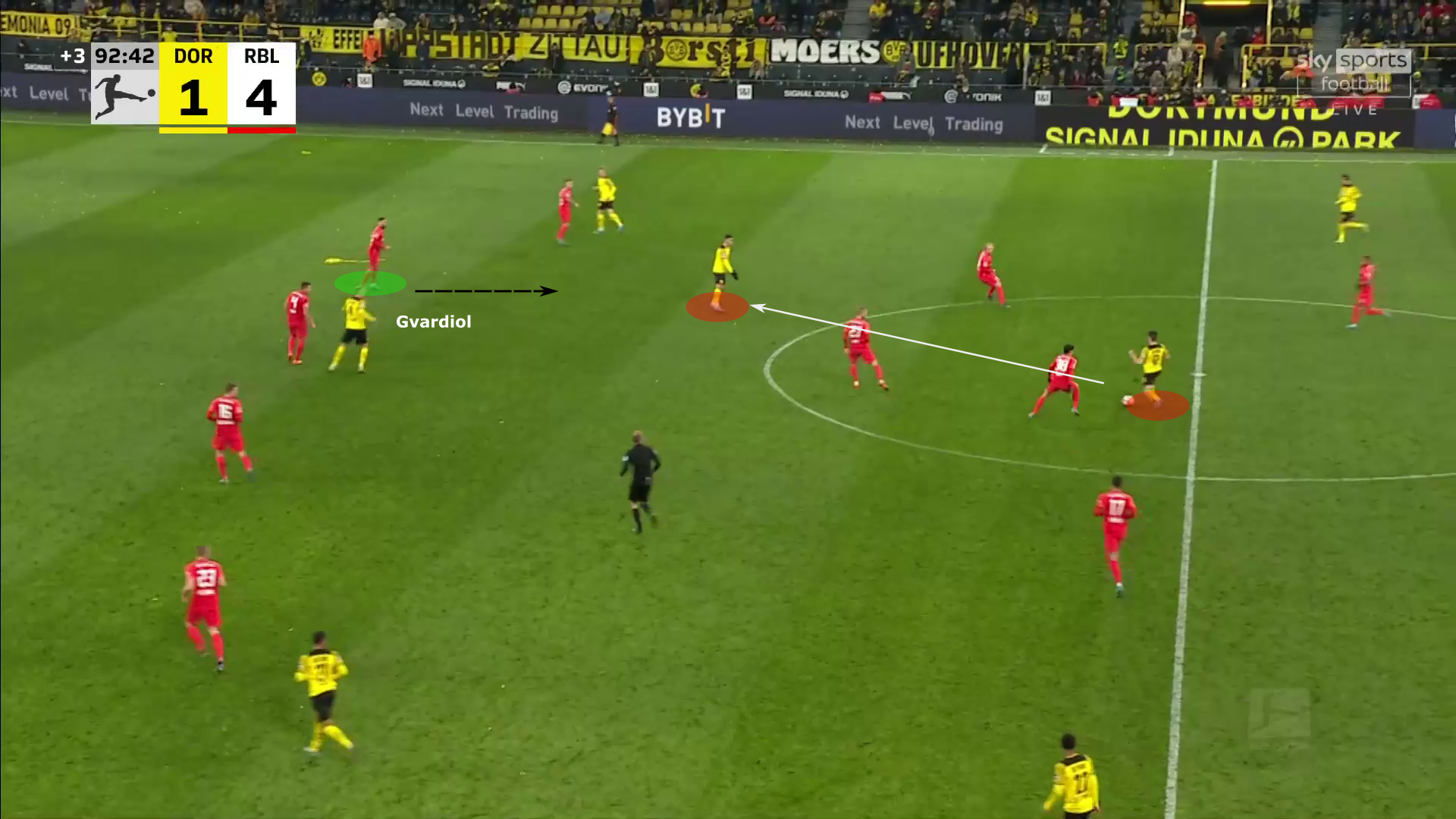 He quickly sniffs the danger and races up to make the tackle and win the ball. 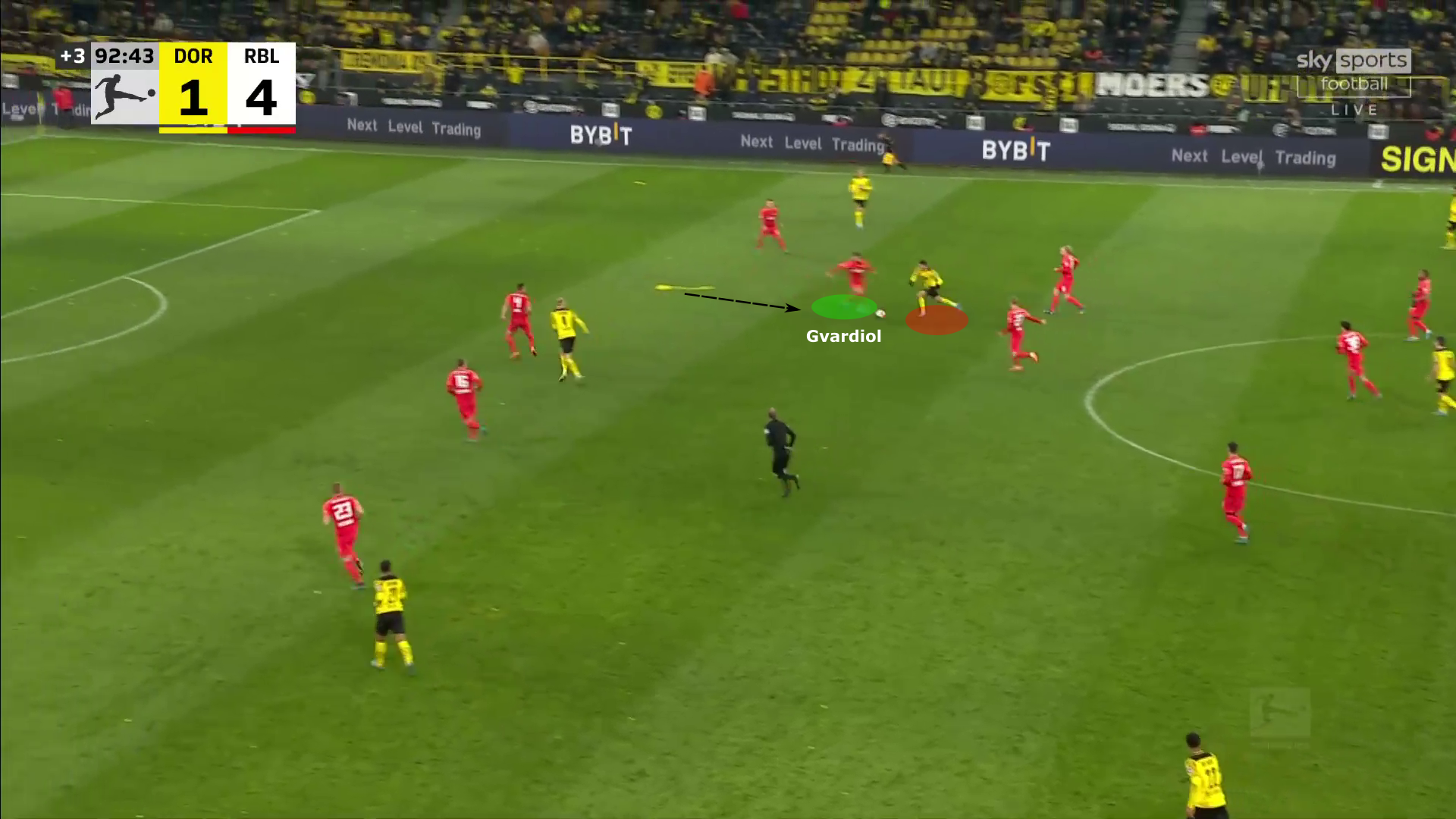 An underrated part of Gvardiol’s game is how quickly he can turn defence into attack. After this interception, he sprints forward on a solo run, passes the halfway line, attracts four defenders and consequently frees up his teammate to find him with a simple pass. The team can then instantly shift into the attacking phase in the final third. 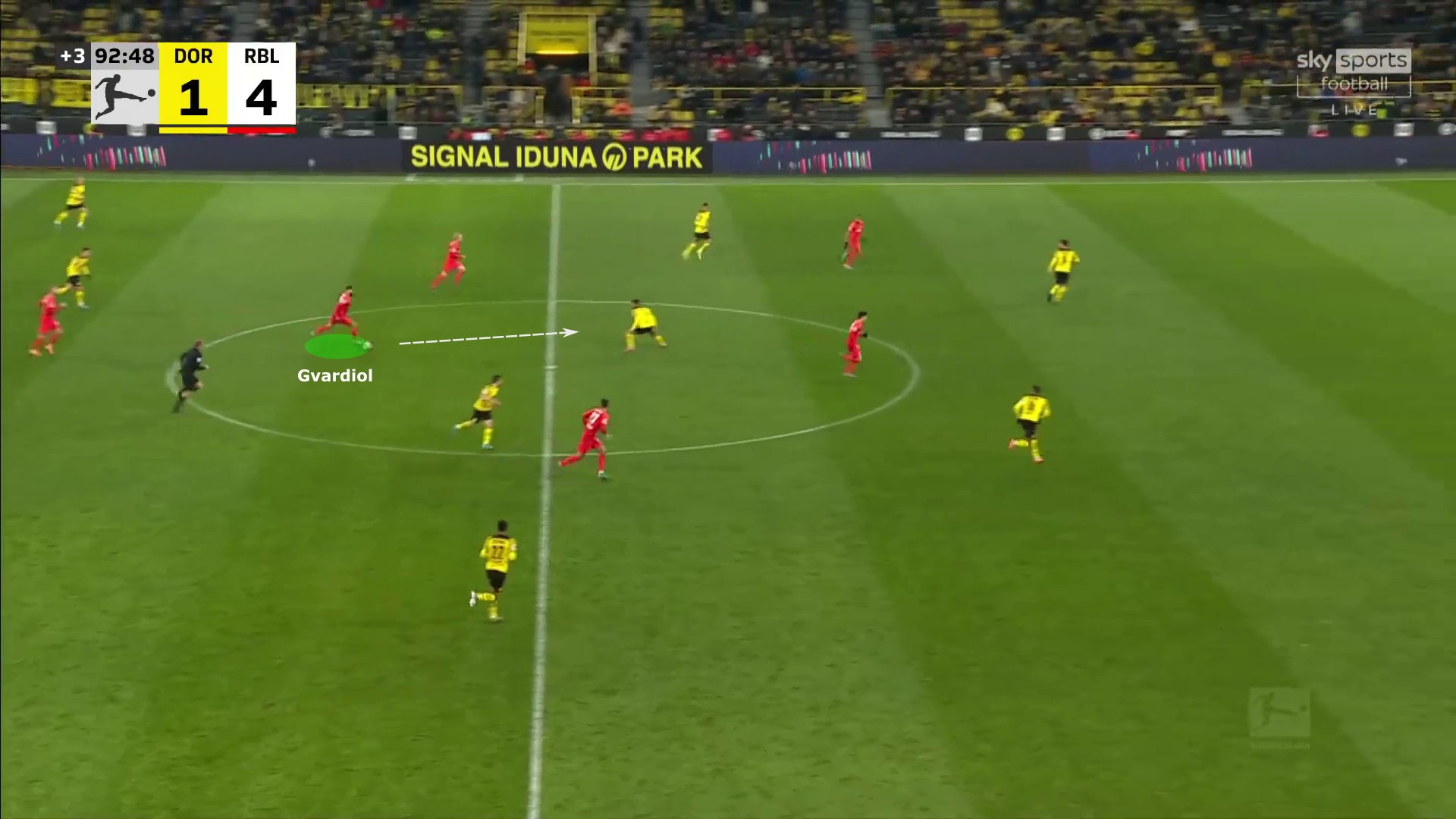 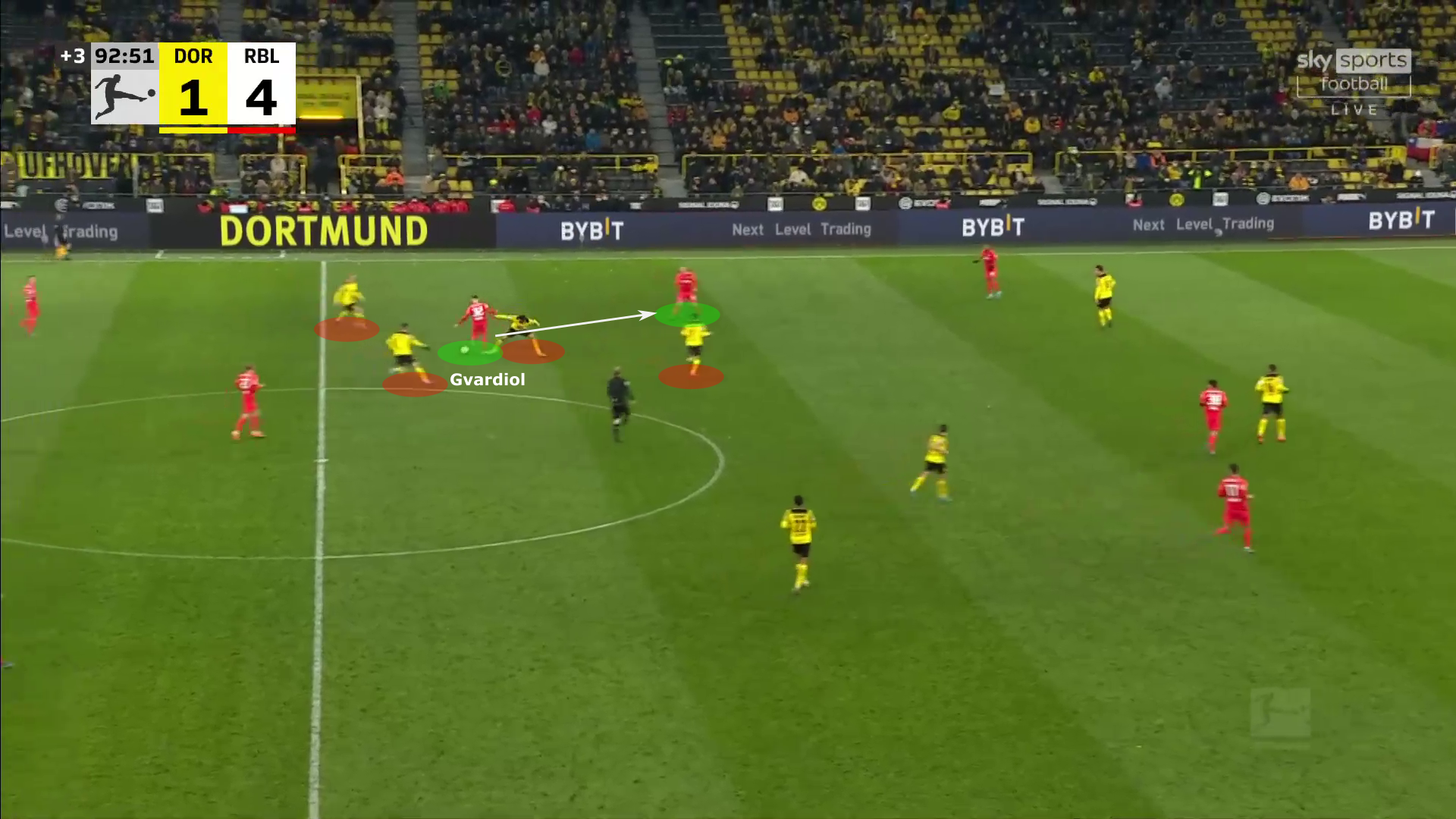 Sometimes, after making a tackle or interception, he can get a bit over-excited and look for the “Hollywood pass” instead of attempting an easier option. This can cause disruptions to the flow and tempo of the team and lead to counters. 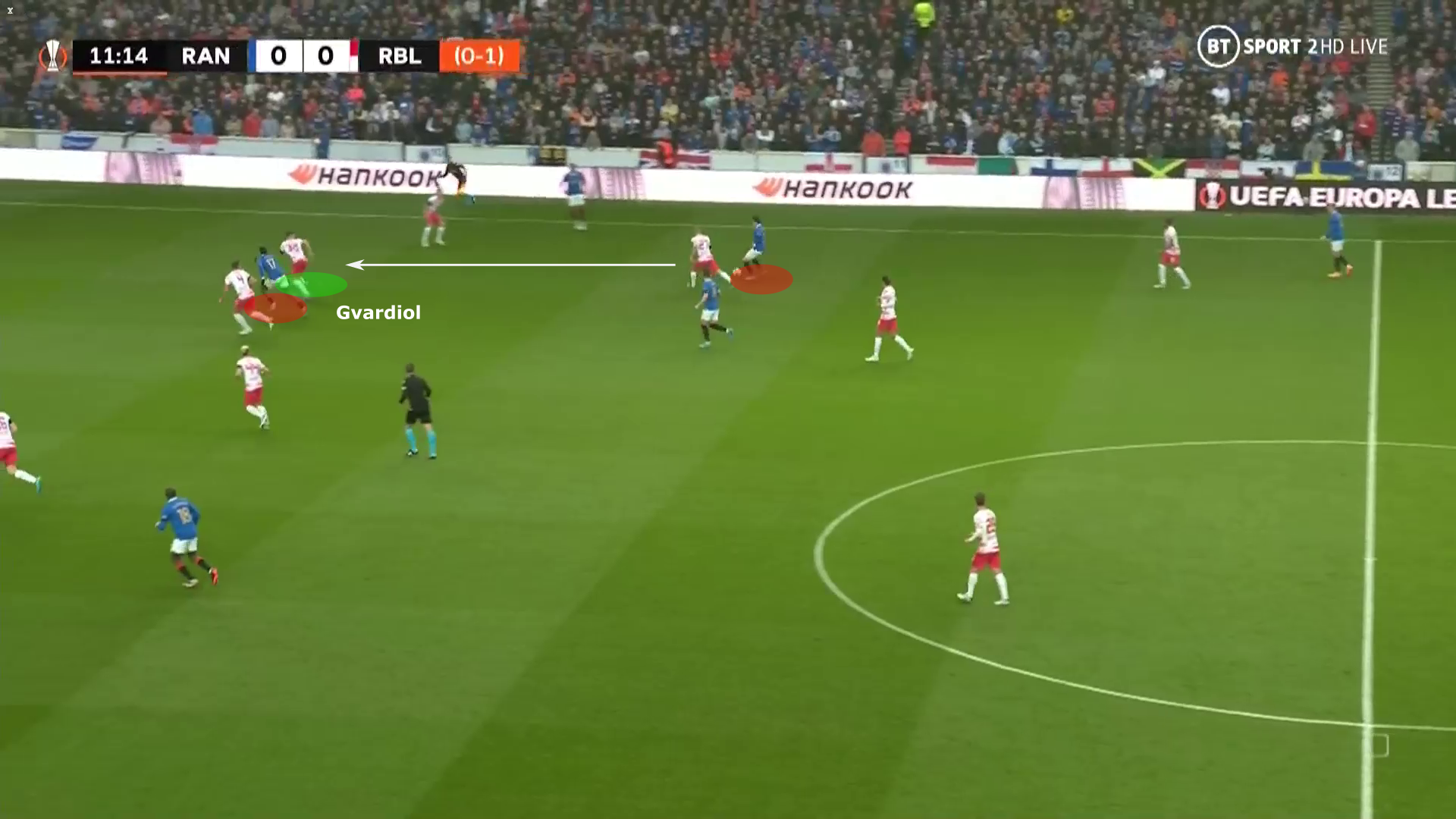 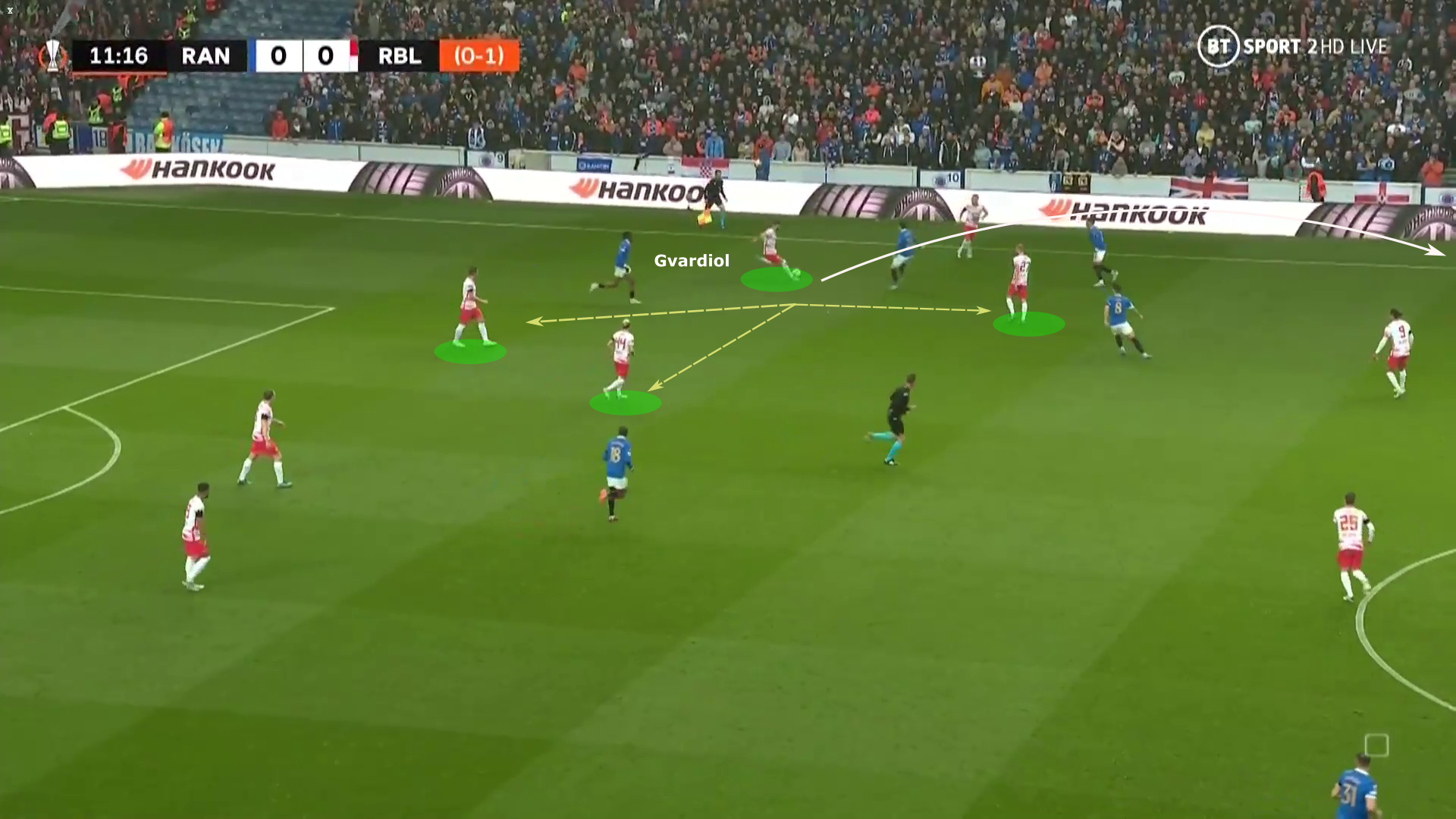 Leipzig follow a gegenpress strategy as a club philosophy, preferring to be more vertical and direct when on the ball, and aiming to press and regain possession quickly when without the ball. This is the reason why Gvardiol has good defensive numbers as well, as he engages in pressures and tackles regularly.

Due to his wide role, his numbers for dribblers tackled (usually higher for central players who face transitions) and aerials contested are lower but his high ‘pressure success %’ and low ‘dribbled past’ numbers highlight how reliable he is as a defender.

Gvardiol possesses elite ball-playing skills and a fantastic mindset. At his young age, he may lack the bite and natural raw instinct of a conventional defender. Polishing and enhancing those defensive skills will escalate him into a complete defender and player.

He has shown his ability to quickly adapt and take on any challenge in his stride from day one, whether at club or international level. At 20 years of age, he is already being hyped up and mentioned alongside the elite defenders of our game, which is the greatest compliment there can be.

With less than a month of the summer transfer window to go, Chelsea have shown the most solid interest in the player. After the departures of Andreas Christensen and Antonio Rudiger to Barcelona and Real Madrid, the team is in need of defensive reinforcements. Thomas Tuchel has managed to add Kalidou Koulibaly to his backline but is keen to strengthen further. Adopting a back-three system at Chelsea, it is no surprise to see why the German manager is interested in bringing Gvardiol to West London.

The prospect of a move to Chelsea will not faze the Croatian international. He has the capabilities to succeed in the Premier League. But, after only one season in the Bundesliga, he is still learning his trade. Perhaps a wiser decision would be to stay put at RB Leipzig for one more season – away from the immediate demands of Chelsea and the English game – and gain invaluable experience, especially in the Champions League.

Any team that manages to pry Gvardiol from RB Leipzig will have a defender that can marshall their backline for the next decade.