Vitinho: Why the Brazilian fullback is perfect for Vincent Kompany’s revolution at Burnley – scout report

So far in this transfer window, Vincent Kompany and Championship side Burnley have looked to Belgium for a few new recruits in preparation for their first season back down in the Championship since 2016.

The former Manchester City defender had already raided former club Anderlecht for Irish midfielder Josh Cullen, as well as signing Samuel Bastien from Standard Liége. However, the most intriguing signing that Burnley may have made from the Belgian First Division A this summer is Vitinho, with the East Lancashire side paying a very modest fee to Cercle Brugge for the 23-year-old Brazilian fullback.

This tactical analysis and scout report will take a closer look at the U20 Brazil international, and analyse why his strengths make him a perfect fit for the Kompany revolution at Burnley. 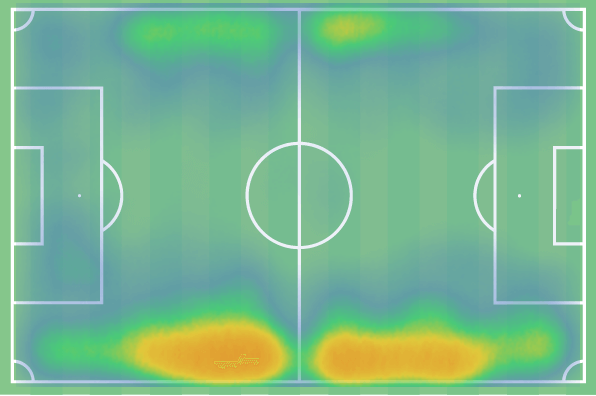 The above image shows Vitinho’s heat map during his time as a Cercle Brugge player. He is normally a right-sided defender, but as it is illustrated, he has the capacity and ability to play as a left-sided defender at times as well.

Another thing about the young Brazilian is that he spends relatively the same amount of time in the attacking third of the pitch that he spends in the defensive third. At times, Vitinho has even been deployed as a winger, albeit one that has a large defensive responsibility. For the style of play Vincent Kompany is looking to implement at Burnley, Vitinho looks to be a perfect match.

Movement in the attacking third

As mentioned previously, Vitinho is a very attack-minded fullback. During his time with Cercle Brugge, the Brazilian averaged 2.07 progressive runs per 90. Vitinho is also a fullback who likes to make overlapping or underlapping runs into the final third and penalty area, allowing him to receive passes and proceed to whip crosses into the box from the byline or wide areas.

These runs could also be decoy runs, allowing his teammates time and space on the ball, or facilitating other free runners to move into that space and become a viable passing option. This section will take a small look at some of Vitinho’s movements in the attacking third of the pitch. 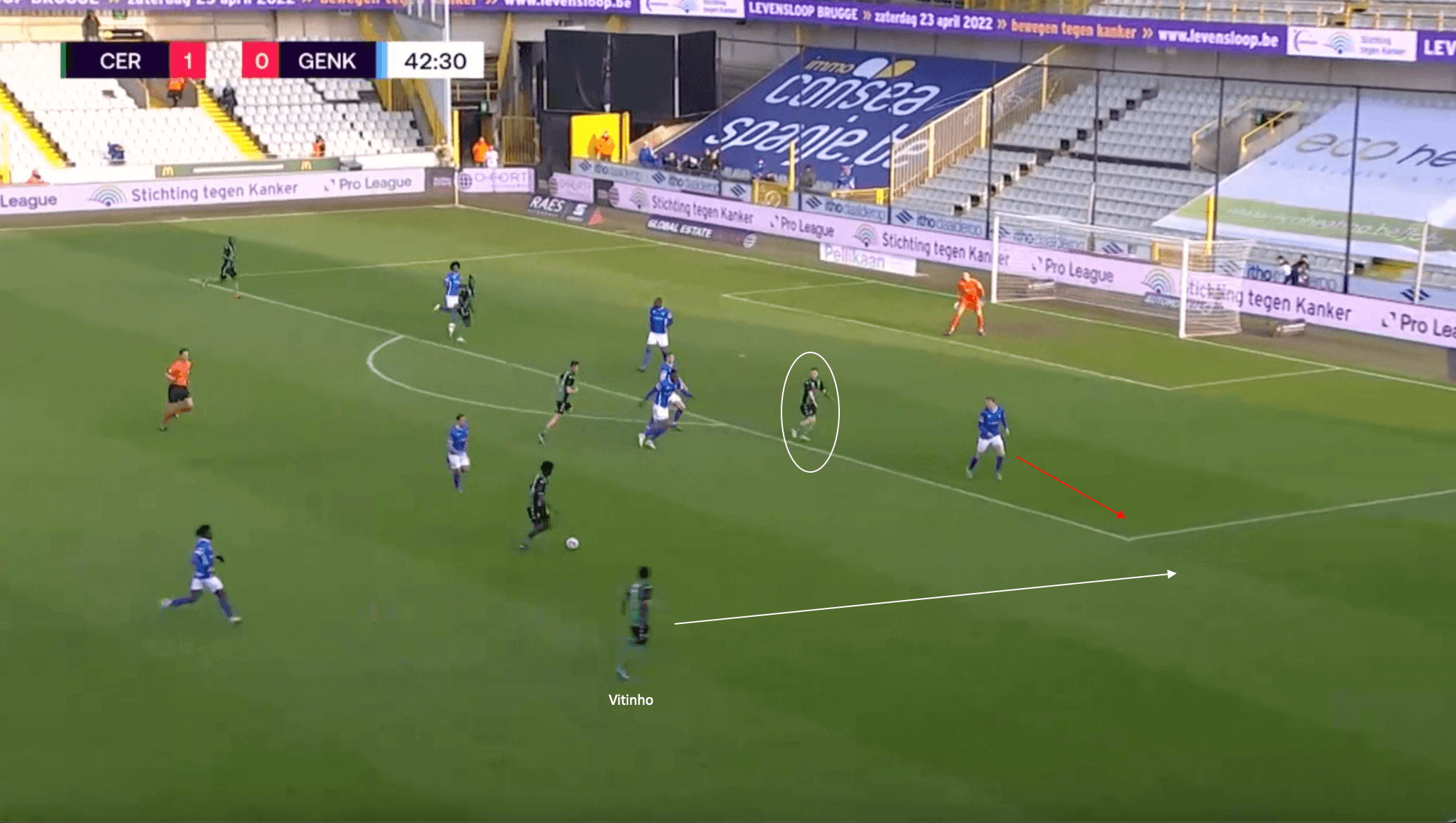 The image above shows an example of Vitinho’s overlapping runs causing trouble for the opposition defender. With Cercle in possession and building in Genk’s final third, Vitinho decides to make a lung busting run forward into the final third. With Vitinho looking like the most logical passing option, the defender moves out to go and mark the Brazilian’s run. As a result, the attacker behind becomes unmarked, with the ensuing pass being played inside to him.

Though Vitinho was not directly involved in this attacking move, his indirect involvement allowed the ball to be played into the penalty box to create a goalscoring opportunity. 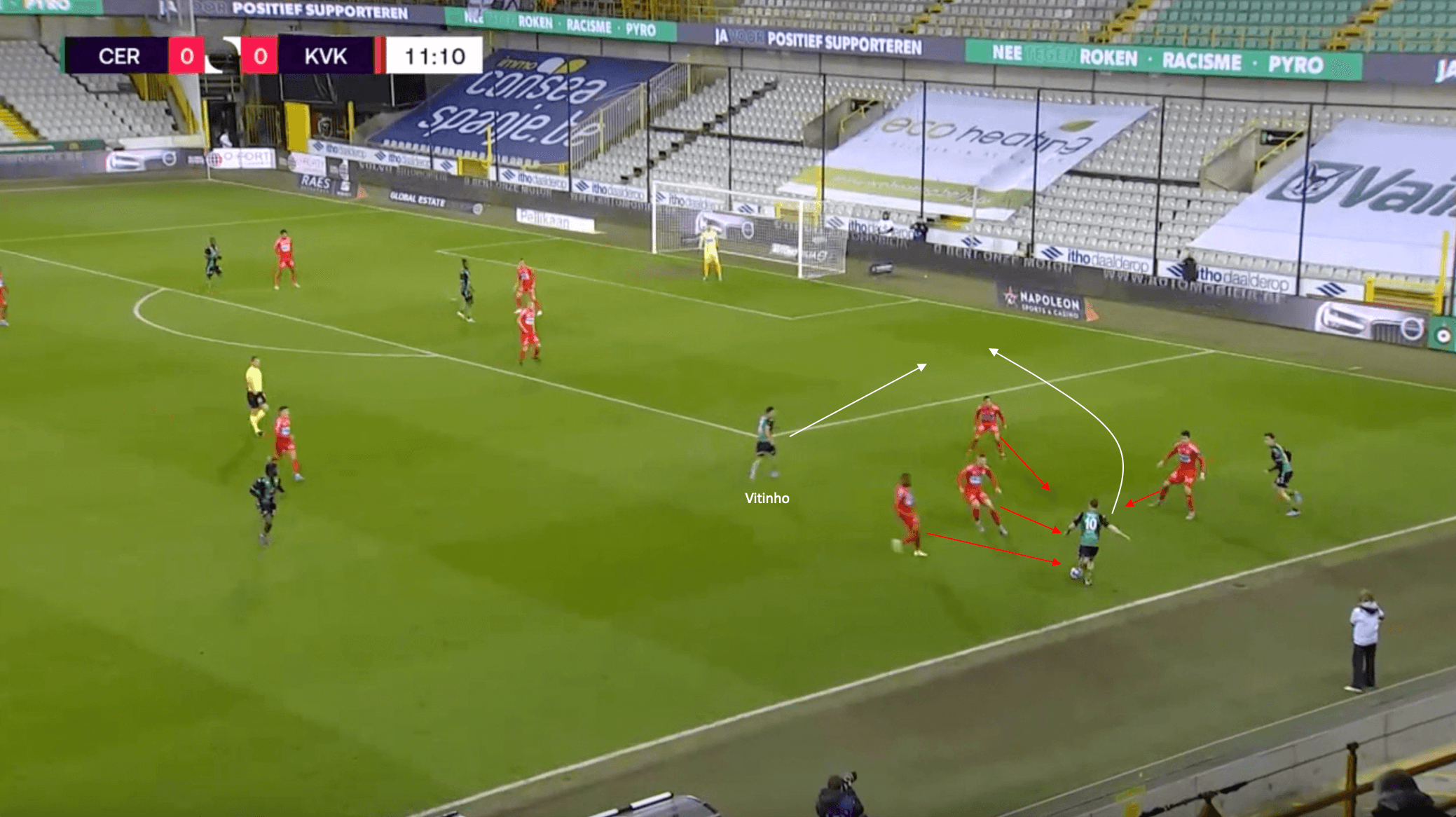 While sometimes the attacking third runs of Vitinho are him being indirectly involved to create space for others, he is also able to be directly involved as well. In the image above from Cercle Brugge’s match against Kortrijk, Vitinho has made an unmarked underlapping run into the penalty box. Notice how all four Kortrijk players are ball-watching, with Dino Hotić the man in possession.

As a result, Hotić is able to play a ball over the top and into the path of Vitinho, who is able to run onto the ball and put a dangerous first-time cross into the box from the byline. This example shows the intelligence Vitinho has when it comes to making off-the-ball movements in and around the final third. 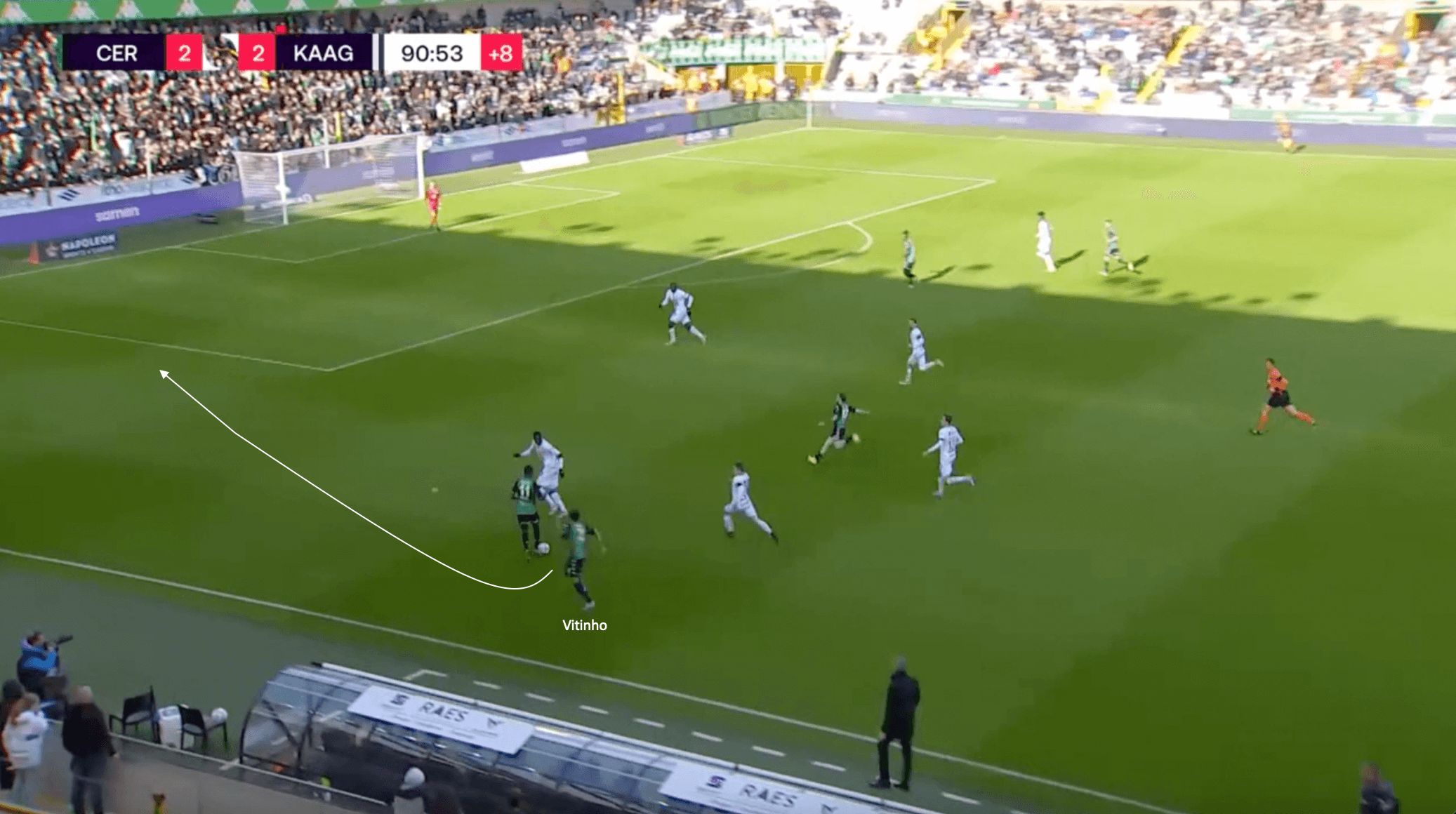 The final example for this section basically is able to summarise Vitinho’s ability to consistently make runs to be involved in the attacking third of the pitch. With new Rangers signing Rabbi Matondo in possession and with no attacking options, Vitinho is able to provide one.

His overlapping run allows Matondo to progress the ball, with the ensuing ball played to Vitinho, who then sends a cross into the box towards the penalty spot. These intelligent movements by Vitinho allowed him to create many chances during his time at Cercle Brugge, with Vincent Kompany expecting the same at Burnley.

As a heavily attack minded fullback, there are often times when Vitinho finds himself caught up the pitch out of position when Cercle Brugge turn possession over in midfield. Many would assume that this would be a weakness in Vitinho’s skillset, but it actually is quite the opposite. The Brazilian has exceptional recovery speed, which allows him to quickly get back into position and close the opposition down before they advance into the penalty box, or even into the final third. This section will take a closer look at some examples of Vitinho’s recovery speed. 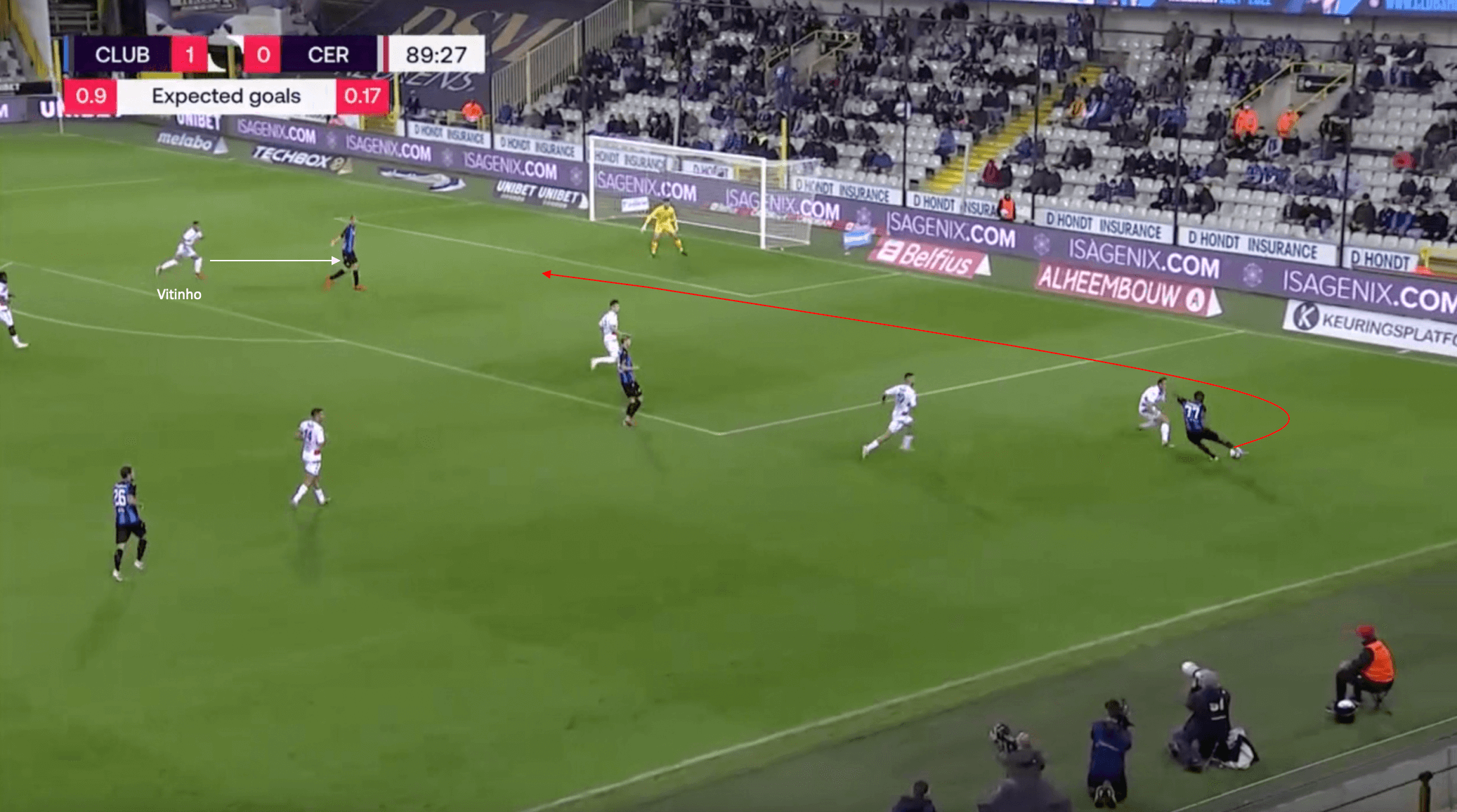 The image above shows a good example of Vitinho’s recovery speed, as well as ability to read the play and notice the danger quickly. Bas Dost is unmarked near the penalty spot, with Clinton Mata playing a perfect pass right into his path for what should have been an easy tap-in.

However, Vitinho is able to quickly notice the defensive lapse, and gets back to clear the ball away before Dost is able to get an easy shot away on goal. Without the recovery speed of the Brazilian fullback, Bas Dost would have had an easy tap-in, putting Cercle out of the match in the process. 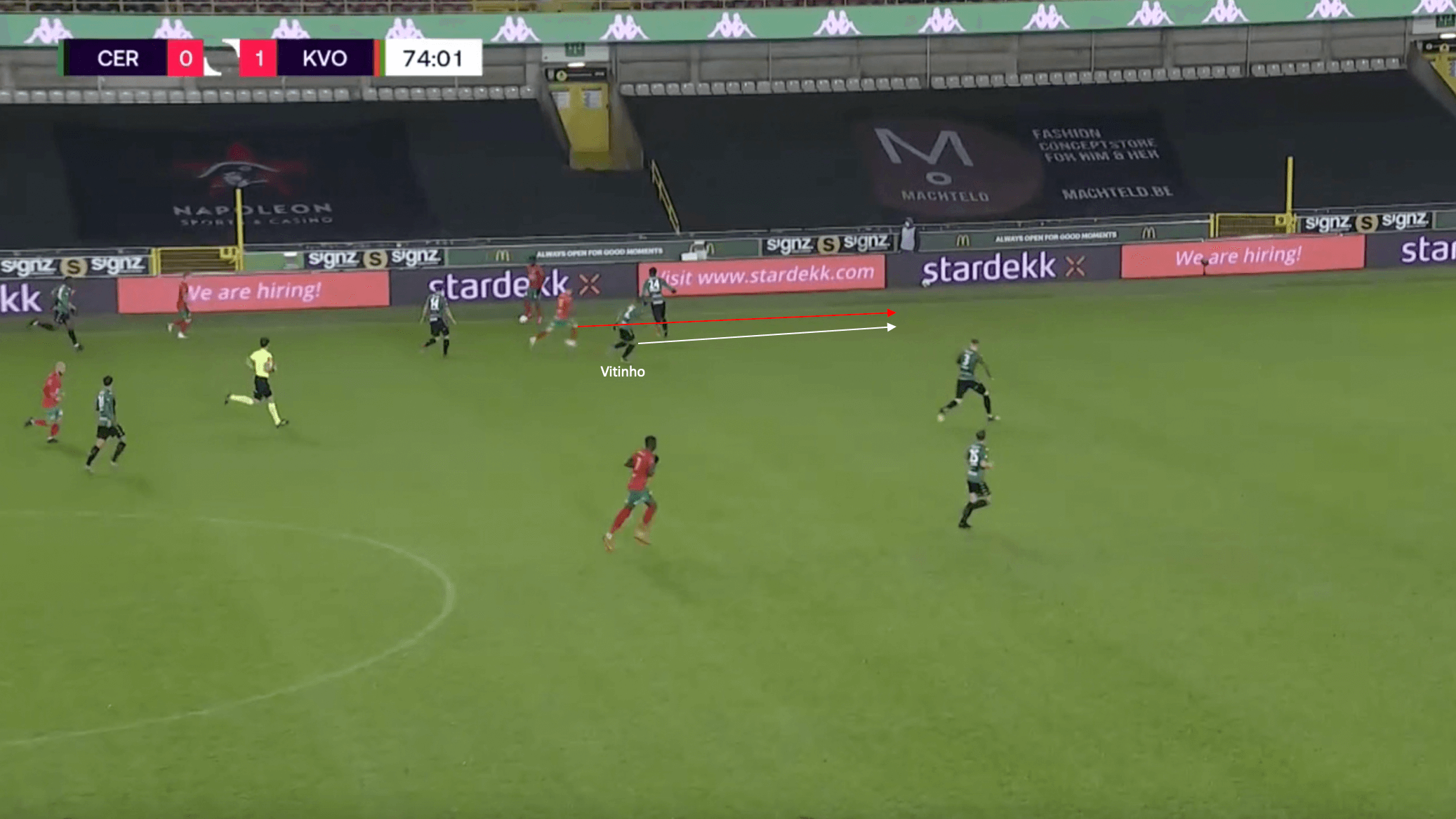 The image above shows another example of the recovery speed of Vitinho. In the phase of play above against Oostende, Vitinho is caught slightly ball-watching, which allows the Oostende attacker to get a head start. The ball is played in behind to the attacker, but Vitinho is able to use his recovery speed to quickly get back, slowing the opposition attacker down while the rest of his defence gets back into position. The Brazilian fullback is then able to close the attacker down, winning possession back as a result.

With an attack-first mindset at times, the ability for Vitinho to quickly recover and track back is massive, with him not leaving his defence exposed during transitions.

While Vitinho enjoys going forward and participating in attacking moments, he also is a capable defender as well, especially in 1v1 defensive duels. Throughout his time in Belgium, Vitinho averaged 8.03 defensive duels per 90, with a success rate of 60.3%. He is not the best when it comes to competing for duels aerially, but when the ball is on the ground, he excels.

It is rather hard to beat the Brazilian fullback 1v1, as his athleticism and strength allow him to knock opponents off the ball. This final section will take a look at some examples of Vitinho’s quality when it comes to defensive duels. 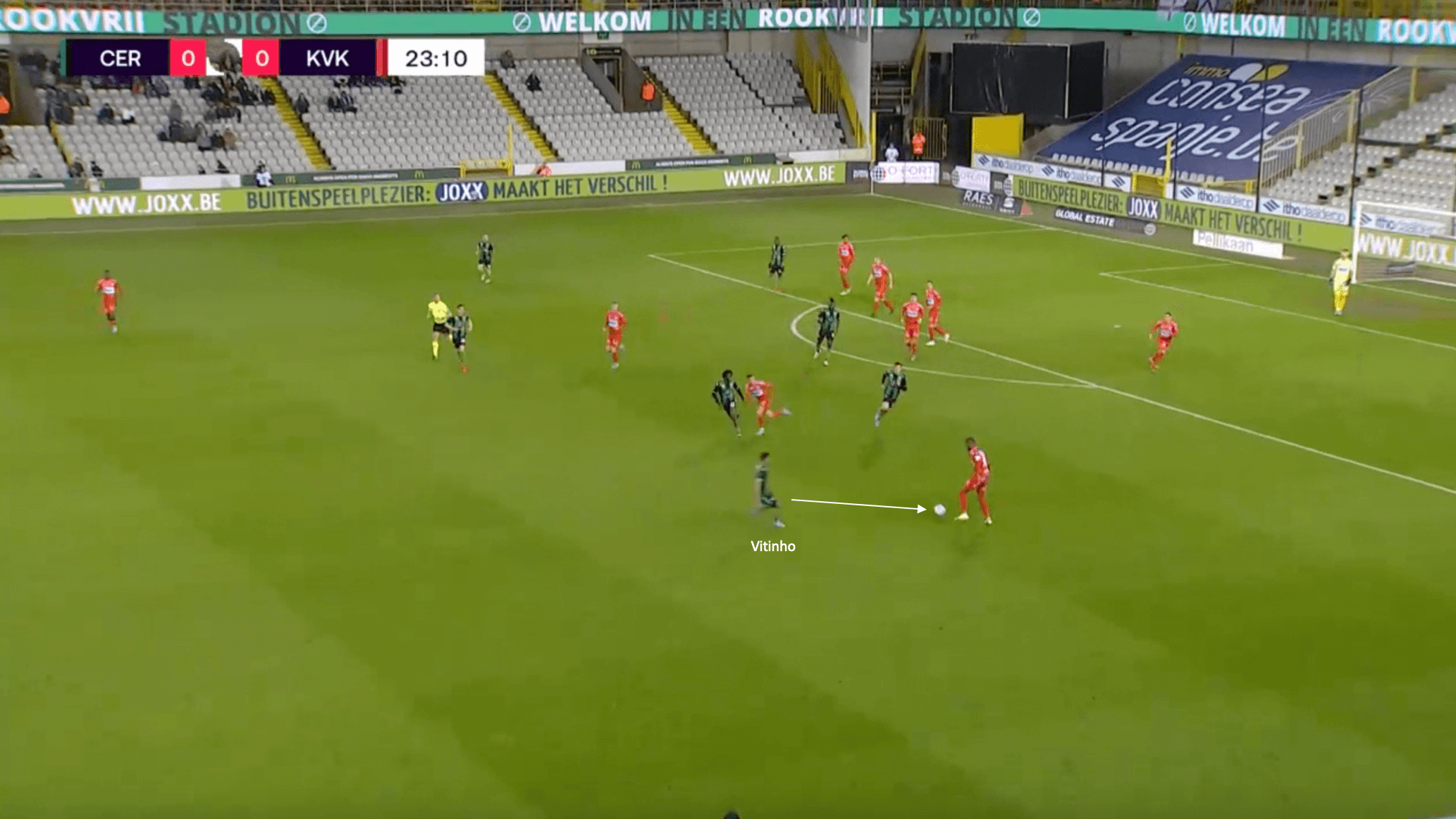 The image above is able to demonstrate a good example of Vitinho’s quality when it comes to defending in 1v1 scenarios. As Kortrijk look to counter attack quickly after a Cercle Brugge attack breaks down, Vitinho is the one that steps in to stop it. As the ball is played wide, the Brazilian is able to quickly close down the space in front of the attacker. He is able to square up to the player in possession, not letting him pass, and steps in quickly to dispossess the opposition player.

The ensuing ball breaks to a Cercle Brugge player, which allows their dangerous attacking sequence to continue. It is not only in an advanced position where the defensive qualities of Vitinho shine through. 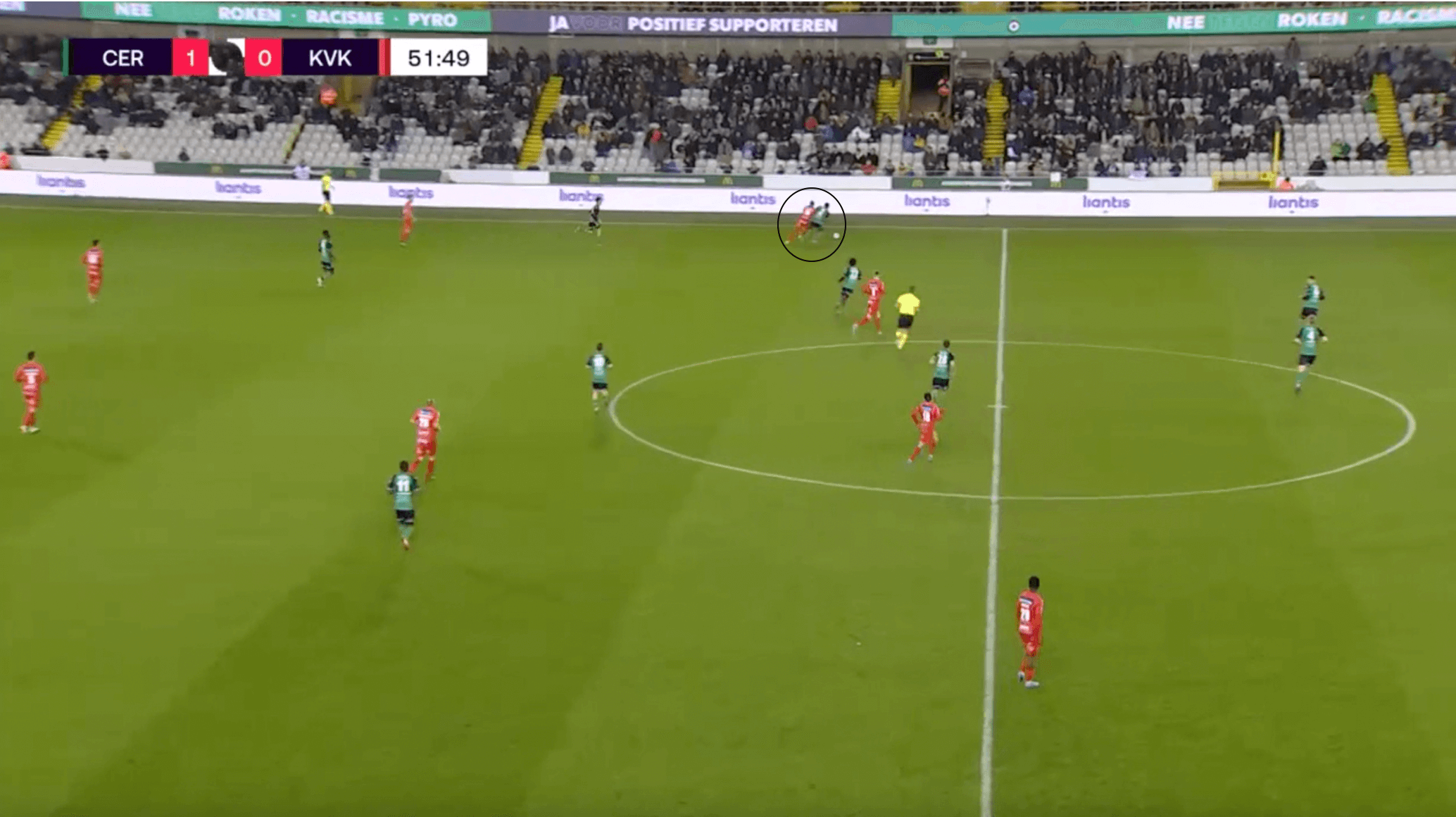 The image above shows another example of the 1v1 defensive ability that Vitinho possesses. In this phase of play against Kortrijk, as the ball is played to the advanced wide player, Vitinho looks to close him down. The opposition player looks to spin around Vitinho and into the space with the ball, but the Brazilian is able to use his strength to hold the opposition player off. As a result, Vitinho is able to shield the ball and let it roll out of play for a throw-in for Cercle Brugge. 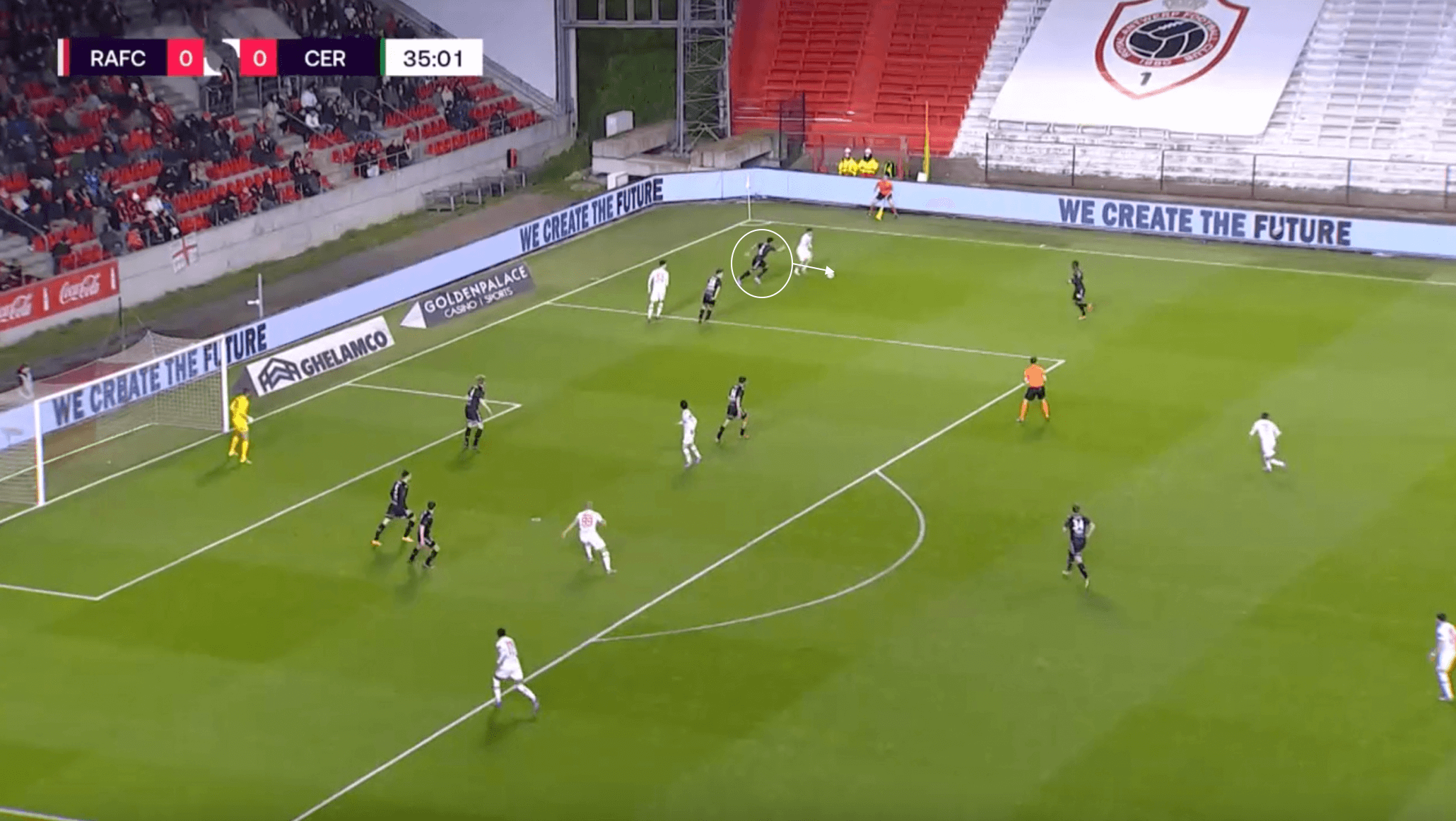 The final example for this section is shown above. In this phase of play, Cercle Brugge are against Antwerp (now managed by former Bayern Munich player Mark van Bommel), and Vitinho is isolated 1v1 against the winger on the far touchline. The winger tries to get the Brazilian to bite and catch him off balance by cutting back inside. However, Vitinho does not. He keeps stride-for-stride with the winger, and blocks the ensuing cross as a result.

This analysis of the defensive side of Vitinho’s game has shown that he should be able to excel under the tactics of Vincent Kompany at Burnley. His ability in 1v1 defensive situations will be crucial to his success in English football.

Burnley made waves this off-season with the hiring of Vincent Kompany as their new manager after the departure of long serving boss Sean Dyche. Kompany has subsequently looked to Belgian football for the majority of his recruits, with Vitinho looking like possibly the most under-the-radar signing who could possibly become the best of the bunch.

This tactical analysis has gone over some of his strengths, looking at why he should have no trouble adapting to the English game.