This week saw PSV Eindhoven’s first competitive games under new manager Ruud van Nistelrooy.  Last weekend, the team faced Ajax in the Johan Cruijff Schaal and, on Wednesday, they were in France for the first leg of this season’s UEFA Champions League third-round qualifying stage against Monaco.

Last season, PSV finished second, two points behind Ajax in the Eredivisie. However, they managed to get some revenge on their rivals with a 2-1 victory in the KNVB-Beker. As the start of this season approaches, van Nistelrooy is coming into his former club determined to make such an impact.

The first impressions have been positive. They kicked off the domestic season in fine form with a 5-3 win in the Johan Cruijff Schaal last weekend, and although they were not able to hang on to the victory in the game against Monaco in midweek, you could see tactically what the team were trying to achieve. The game plan was clear, and van Nistelrooy will be pleased with how the team performed both in and out of possession.

This is a tactical analysis of the key tactics and the first impressions made by van Nistelrooy within his tactical approach so far. We examine the key components with how the team looks to set up defensively and their attacking traits in possession. 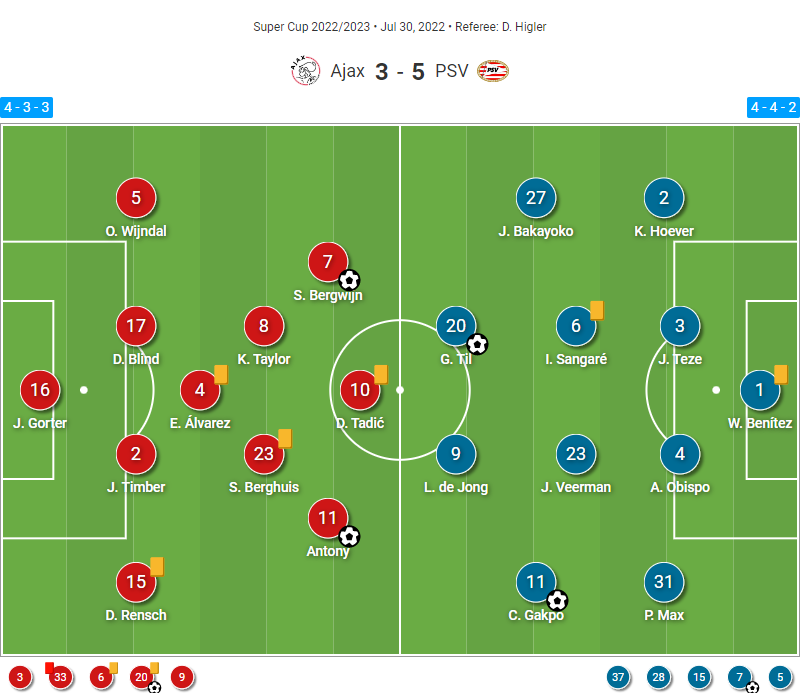 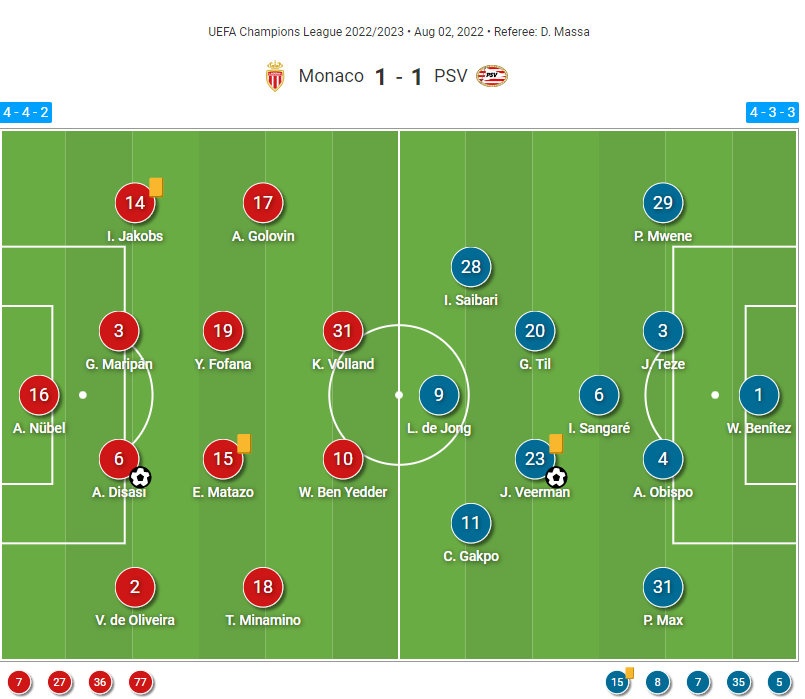 Van Nistelrooy has already shown flexibility with his tactical system as the KNVB-Beker holders have started each competitive game with two different formations. Against Ajax, they began the game with a 4-4-2 and against Monaco, they started in a 4-3-3 formation. PSV is struggling for options in the attacking third, so there have only been two changes within their starting eleven for these two matches. With Olivier Boscagli, Carlos Vinicius, Noni Madueke and Mauro Junior all out injured there has not been much room for van Nistelrooy to rotate with.

Luuk De Jong, who returned to the club this summer from Sevilla, has started up front in both games. It appears that he will the focal point for how the team attacks. Even though the first indications are that PSV will attempt to impose themselves by dominating the ball, there has been a variety to their play that de Jong looks vital for.

With the highly-rated Cody Gakpo and Guus Til already making encouraging impressions, once van Nistelrooy has a full squad to choose from, the former Manchester United forward will have nice selection headaches.

Traditionally, most Dutch managers will always favour a 4-3-3 that will transition to a 4-1-4-1 defensive shape when playing against the ball.  Out of possession, van Nistelrooy has the team defending in a 4-4-2 formation. As a team, PSV keeps a narrow, compact 4-4-2 shape, keeping the space between the lines to a minimum and forcing the opposition to play wide.

The players will remain in their positions with their teammates and shift towards the ball collectively. This is a position-oriented zonal marking approach. PSV don’t directly pressure the opponent or the ball as they will look to control the space the opposition can play towards.

The team sit in a medium block and look to protect the centre of the pitch, with any direct pressing on the ball set by a trigger.

As Monaco is building up through the centre-backs here, PSV is not putting any pressure on the man in possession. Instead, their defensive block is focused on cutting any viable ball progression through the centre of the pitch, leaving the only two passing options as the full-backs. Once the ball is played out wide, then PSV will exert more pressure on the ball as they look to win the ball or force the play out wide. 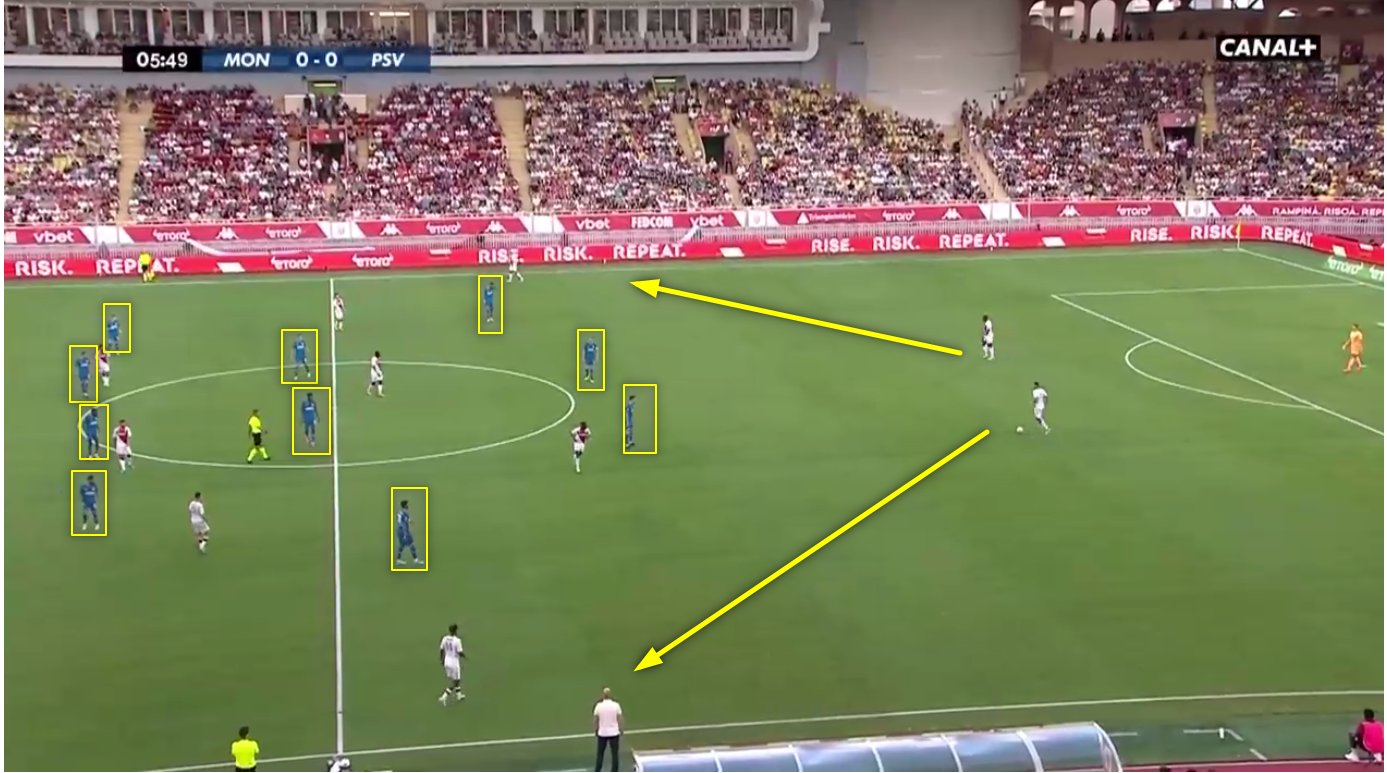 This is a change from the defensive tactics employed under Roger Schmidt last season, who instructed the team to engage higher up the pitch with a more aggressive counterpress system.

Under van Nistelrooy, the team’s pressing system would be classed as ball-orientated as each player will press the play when the ball comes into the area of the pitch while the rest of the team retains the defensive shape. The team’s high press is set by the trigger. The trigger is set as the opposition plays the ball through the wide areas.

If the wide players are successful in forcing the play backwards through the press, then they actively pursue winning the ball and switch to a man-oriented pressing system. The image below shows how the team has pressed high up the pitch, with each man marking the closest player and the possible passing options tightly. 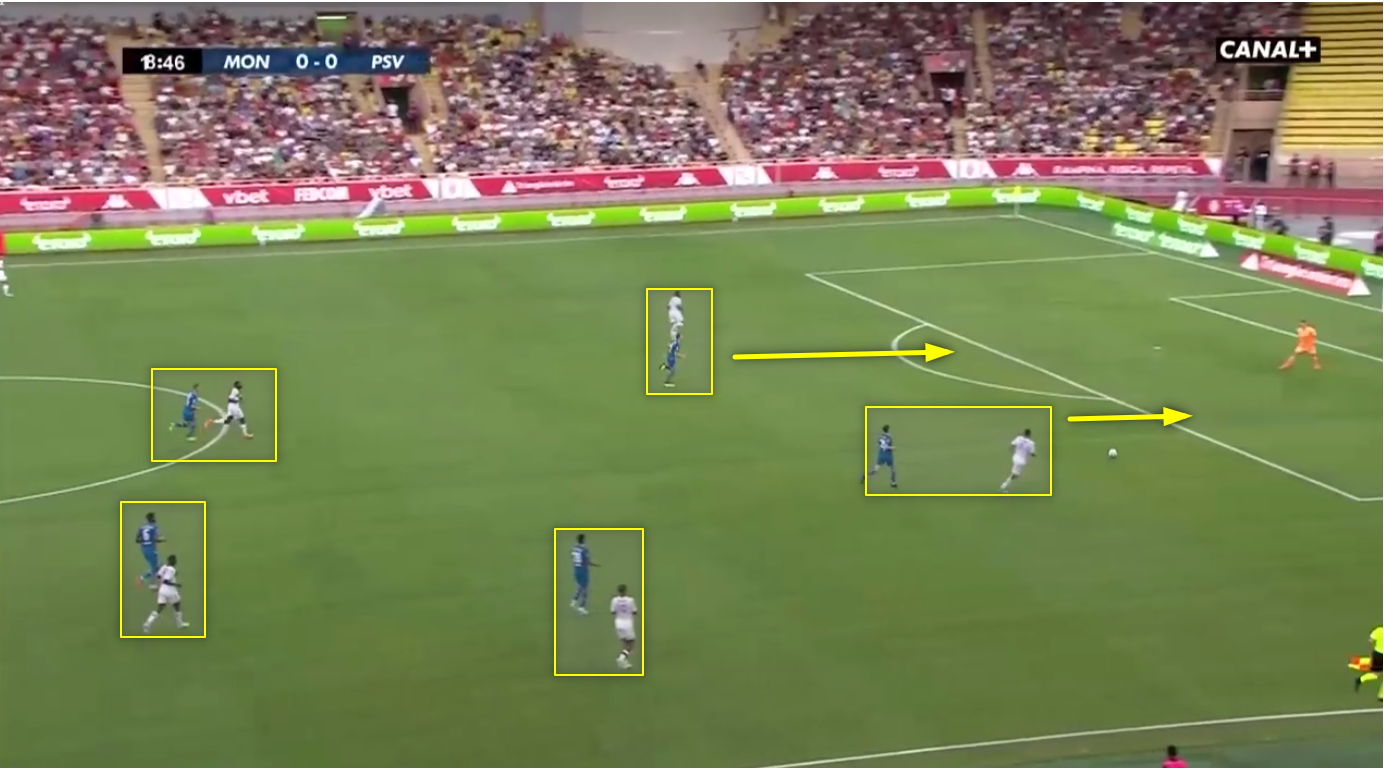 The centre forward that continues the press and looks to close the goalkeeper is dependent on the direction the goalkeeper takes the ball with his first touch.

Against Monaco, PSV were successful with their plan of forcing the play out wide. A common trait throughout the game was how, when Monaco was able to progress the play into PSV’s half of the pitch, PSV were overloading them defensively in the wide areas.  The compact and narrow shape was a feature that supported this tactic.

When the play was forced out wide PSV will move across the pitch horizontally to ensure the space available to play through and any gaps between their defensive block are kept to a minimum. These two examples show how the defensive overloads in the wide areas were cutting off Monaco’s ability to play around PSV Eindhoven’s defensive shape.

When Ismail Jakobs receives the ball and plays it down the line, PSV immediately has a numerical advantage. They have created a 3v2 and 4v2 in each scenario. 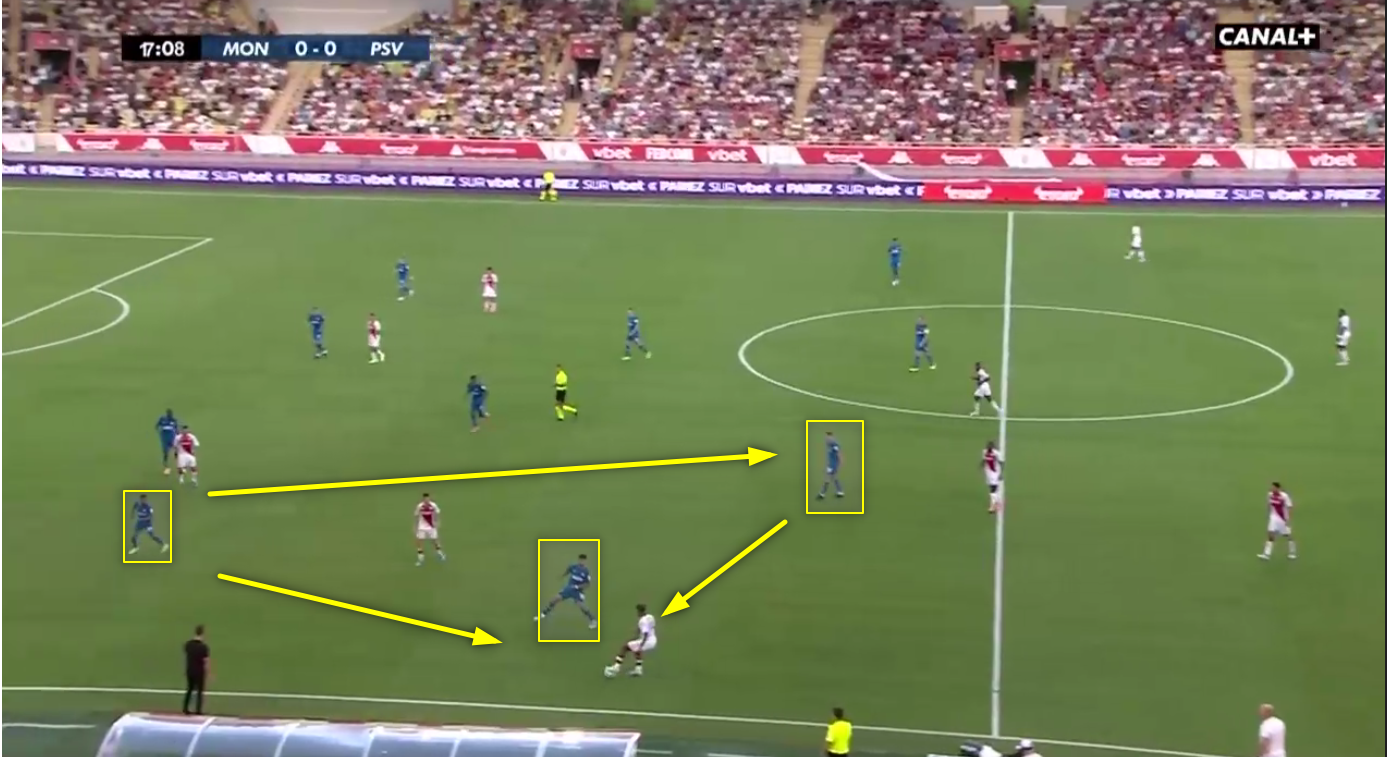 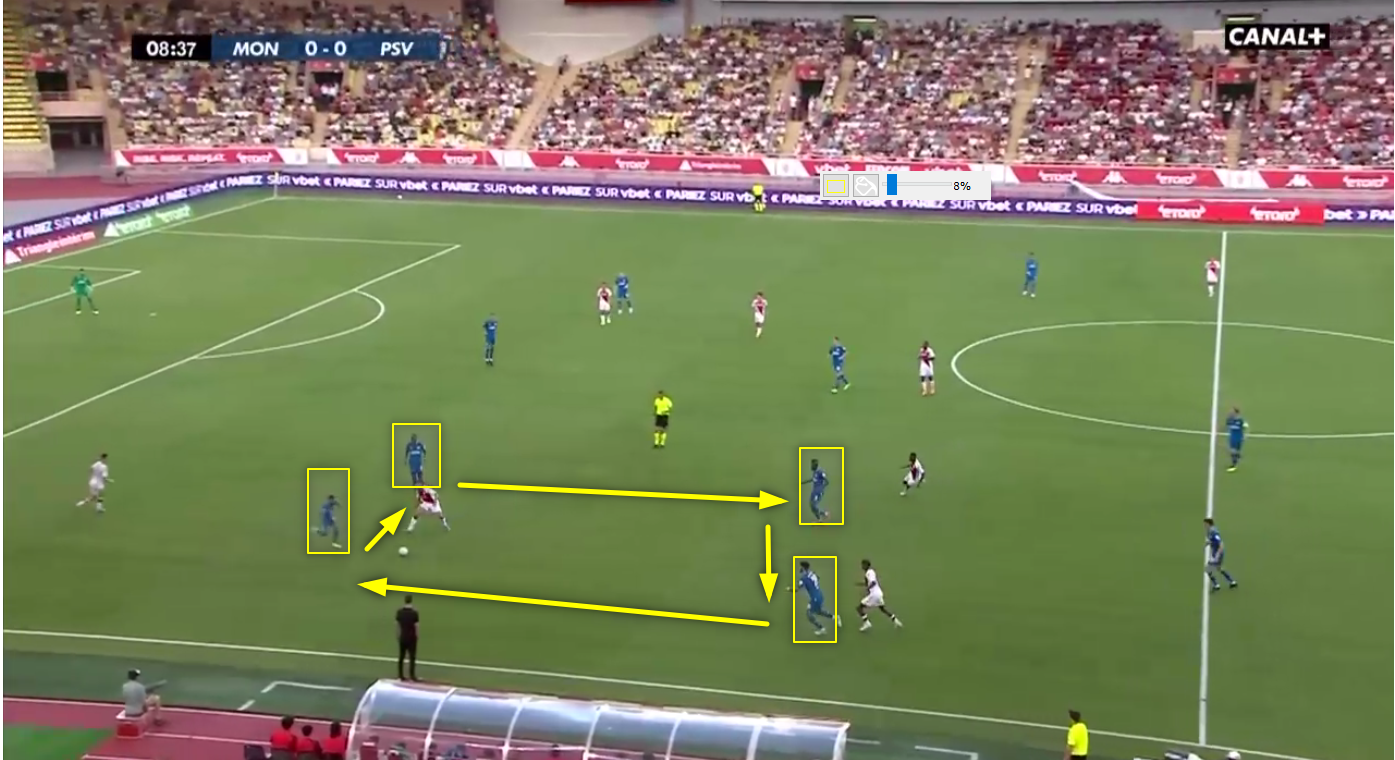 Van Nistelrooy attacking approach resembles that of a Dutch manager. PSV look to play through each third of the pitch, keeping possession of the ball, with their principles being focused around positional play. 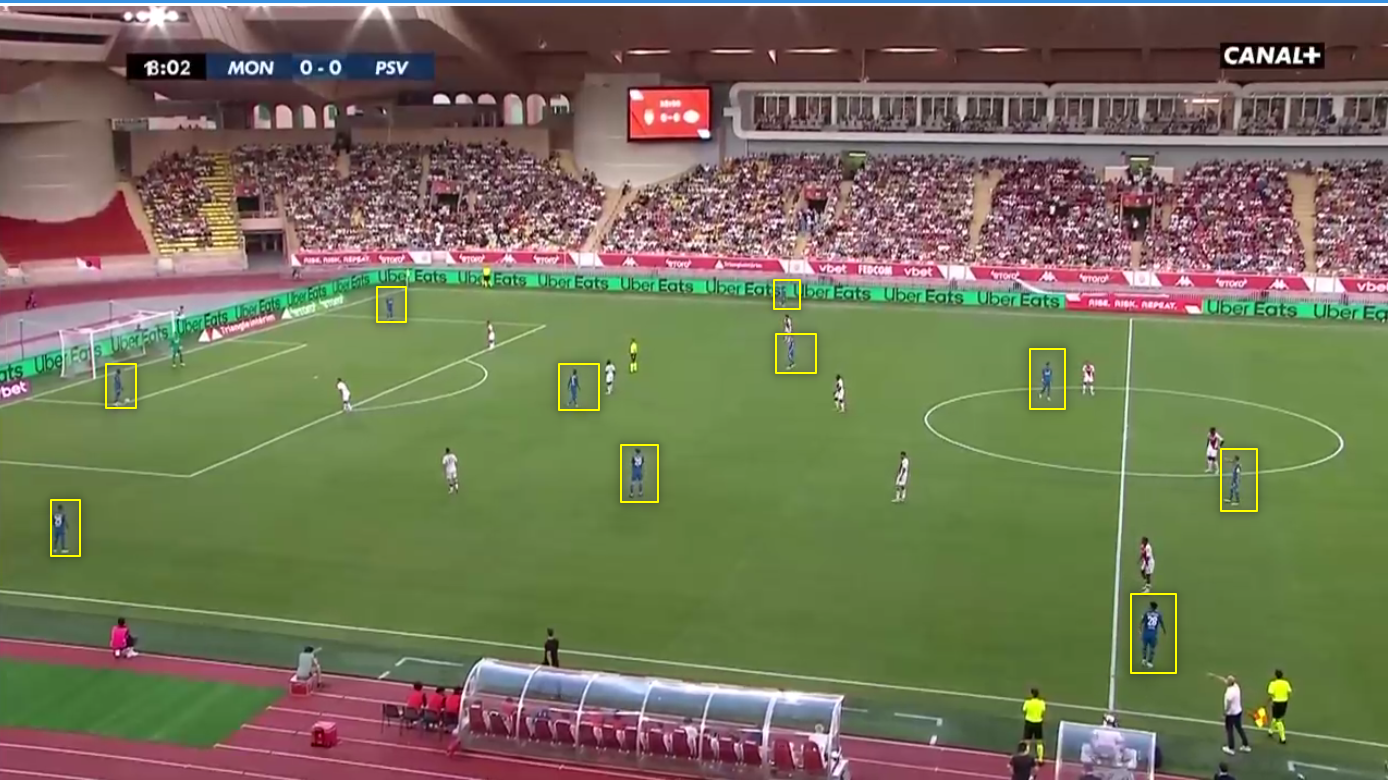 Setting up with this type of positional structure can allow players to move from zone to zone automatically and fluidly depending on the other player’s movement. PSV don’t utilise that aspect of positional play, they focus on moving the opposition from their defensive shape via ball progression. The above image demonstrates this. You can see how many possible triangles and diamonds can be created with every possible pass during the build-up. This gives every player at least two passing options right through each third of the pitch.

Ibrahim Sangaré takes the ball of the centre-back to draw the press, this pulls Monaco from their 4-4-2 defensive shape to a 4-2-4 shape.  His next pass goes to the full-backs or his midfielder and then to the full-backs as they look to progress down the flank. You can see how they’re creating a 3v2 overload on each side of the pitch ready for progression. 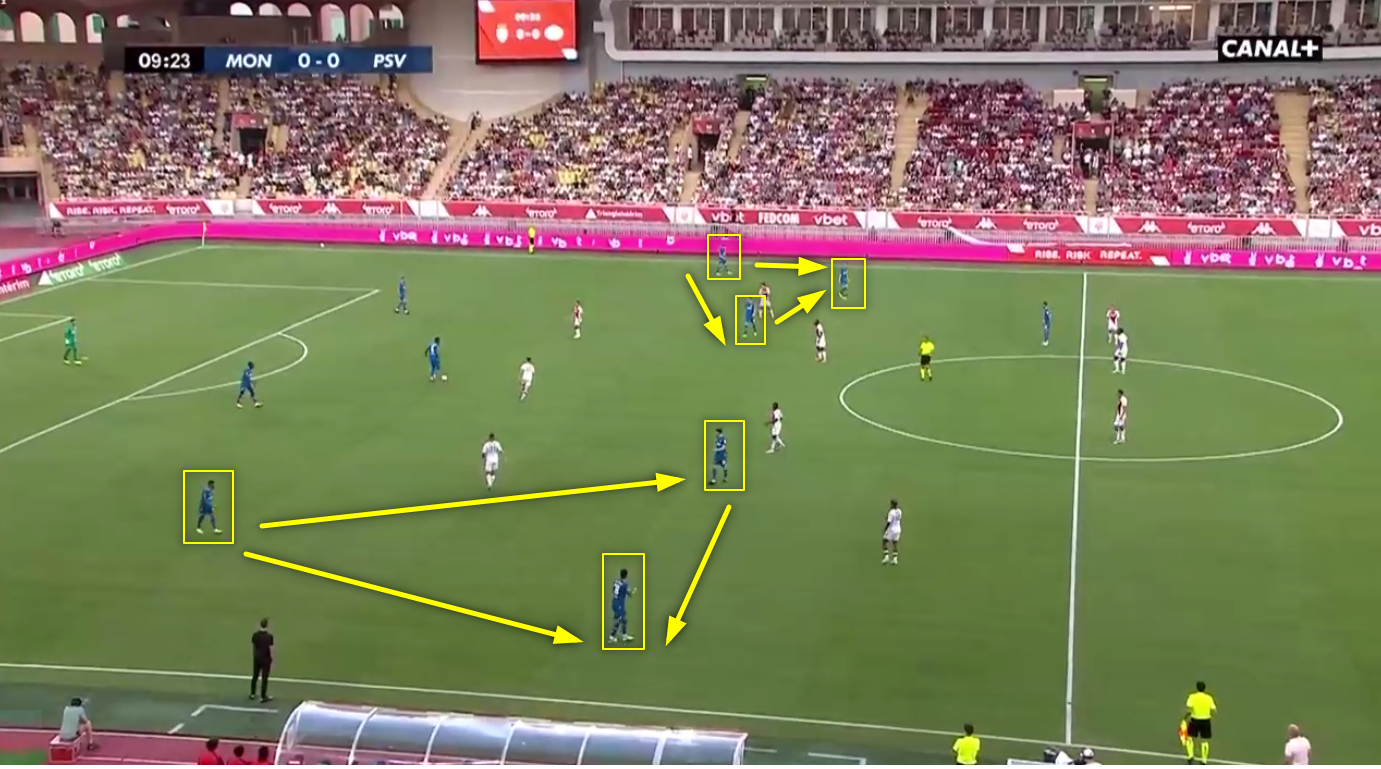 It’s the same when they are building from the middle third to the attacking third. A player will always act as the focal point centrally and operate as a decoy to attract the opposition inside, then look to exploit the space on each flank.  The image below shows how PSV Eindhoven have created an overload on the left-hand side. 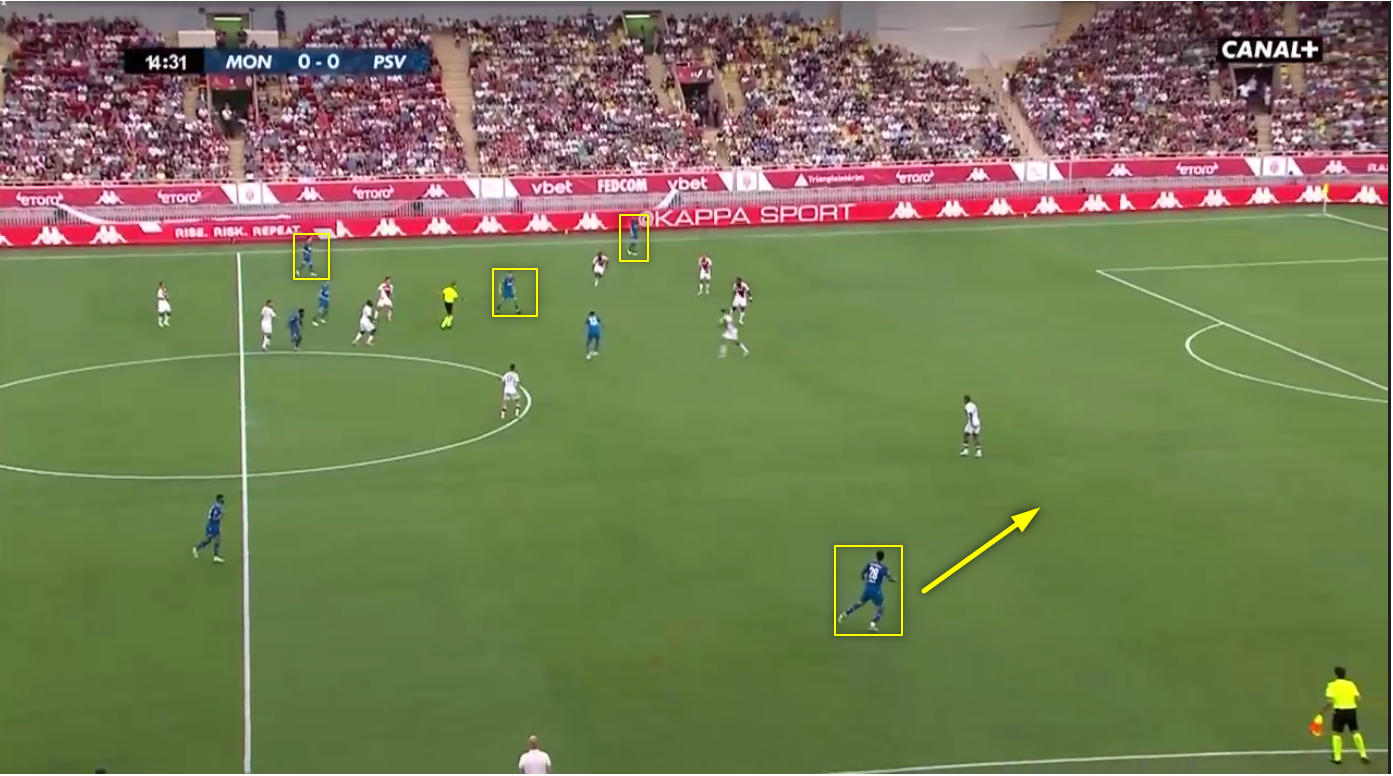 The position of Luuk de Jong and Cody Gakpo between the lines makes Monaco’s defensive shape come further inside and defend narrow. It also makes it inevitable that a player or players will have to leave their positional line to close them down.  This provides them with two opportunities to attack and open the play down each flank as they have 3v2 overload on the left-hand side or they have Ismael Saibari available 1v1 on the right-hand side.

Once they take control of the game and dictate the tempo PSV doesn’t follow the usual positional play shape of a 3-2-5, 3-1-6 or a 2-3-5, where the attacking line overloads the opposition’s defensive line. PSV transition into an asymmetrical attacking shape of 3-3-1-3. The shape still allows them full coverage of the pitch as the image shows how they cover every zone across the pitch. 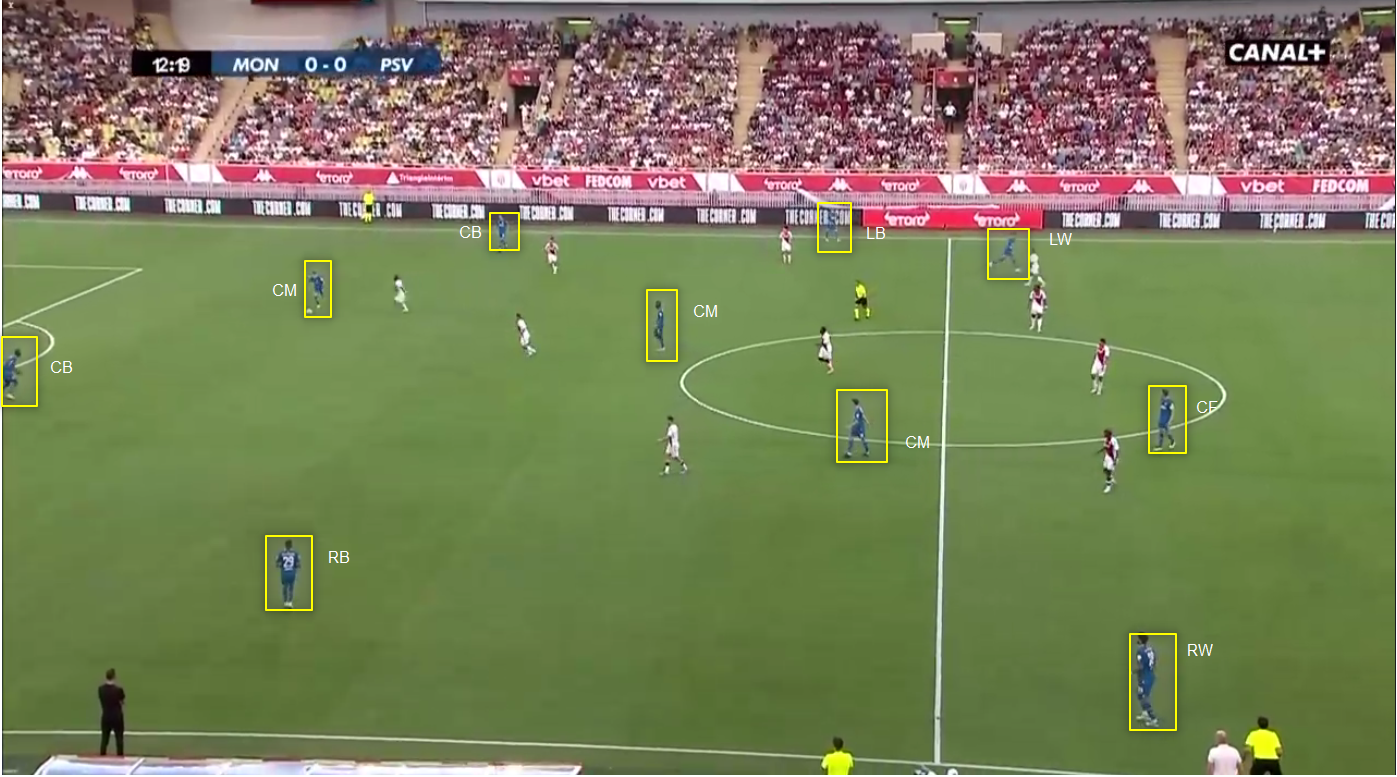 The difference in this shape with how Ruud van Nistelrooy has set up PSV is the orientation of the fullbacks. The fullbacks have not been relied upon to provide the width for the team. It’s the wingers that provide an outlet for the team as they progress the play as above.

Once the team attacks the attacking third, it’s the same. The full-backs don’t overlap the wingers to stretch the play out wide, they just position themselves to support the play.

You can see on the image below how the full backs position themselves. They are not pushing high but you can see from positional sense the team still provide options right across the pitch, with central midfielder Joey Veerman attacking the space in the outside channel as Cody Gakpo attacks centrally. 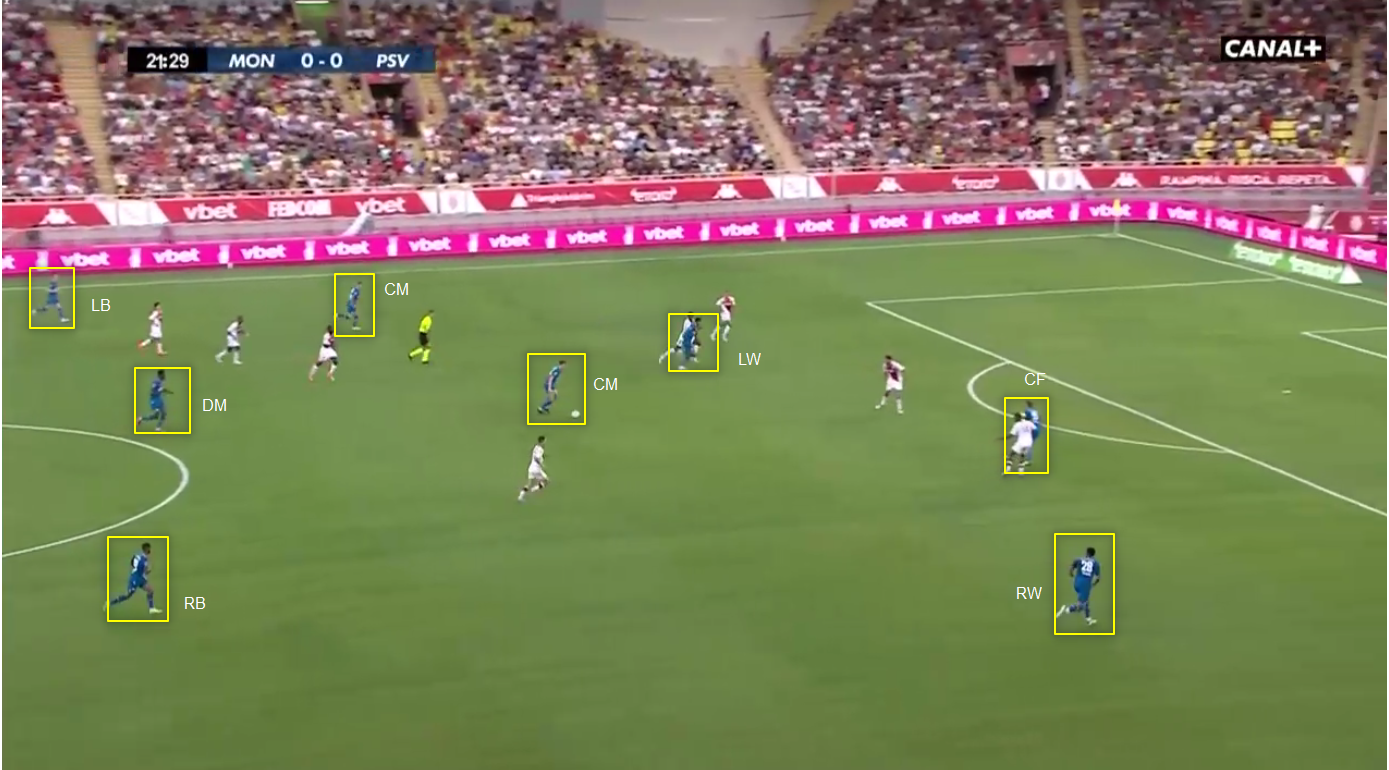 It’s been a positive start for Ruud van Nistelrooy, and PSV Eindhoven can be optimistic for the season ahead. With one trophy already won and Ajax losing Erik ten Hag, Sébastien Haller, and Lisandro Martinez, there will be hope that the former Real Madrid striker can put the team back at the top of Dutch football.

This article provides a tactical analysis of the tactics that Ruud van Nistelrooy has employed at PSV Eindhoven so far. A pragmatic and sold defensive shape out of possession and with their attacking play being focused on controlling the game through positional play, using wide overloads, and quick transitions at the right opportunity.