Marcelo Bielsa: An Argentine in Yorkshire

Leeds United are currently experiencing what feels like a revolution. The arrival of Marcelo Bielsa in the summer has helped drastically turn the club’s fortunes in the Championship around going into the second half of the season. The mythical Argentinian figure, hailed by ex-Barcelona manager Pep Guardiola and Mauricio Pochettino, is bringing a new sense of excitement to West Yorkshire.

The glory days of Leeds seem long past, but new hope has arrived thanks to Bielsa. The financial struggles United have been through over the last few years have been well publicised, with the club even dropping into League One on one occasion. To those of a certain age, this would be an unimaginable concept.

Last season saw the appointment of Danish manager Thomas Christiansen. After an early surge at the start of the season to the top of the table, results began to drop off. Christiansen was eventually sacked in February 2018 after a 4-1 defeat to Neil Warnock’s Cardiff City. They lay 10th in the table.

Then came the appointment of Paul Heckingbottom, something of a surprising appointment considering his Barnsley side were in the throes of a relegation battle. Results failed to pick up and Leeds failed to to rise any higher than 11th under his stewardship. They finished the season 13th, and the somewhat inevitable sack came.

In came Bielsa over summer, and the hype began over the man who is often deified as a father of modern football. There are, however, clouds of doubt over certain aspects of his approach. The apparent over-tiredness of his teams from the high-octane style that has ultimately stopped him winning more major trophies. Then there are the messy departures from Lazio and Lille.

It is hard to pinpoint where responsibility lies exactly for these past occurrences. So far, there has been little sign of such things happening with Leeds. It’s been a dream start for the Whites with Bielsa, and the club appear to be looking to make a long term success out of the Argentinian’s appointment.

The hallmark formation that is so often associated with Marcelo Bielsa is a 3-3-1-3. It is implemented, somewhat indirectly, into his Leeds United side. As per the team sheet, they appear to line up in a 4-1-4-1, but throughout the game this amalgamates into the 3-3-1-3. Below, we can see the the 4-1-4-1 Leeds appear to set up in. 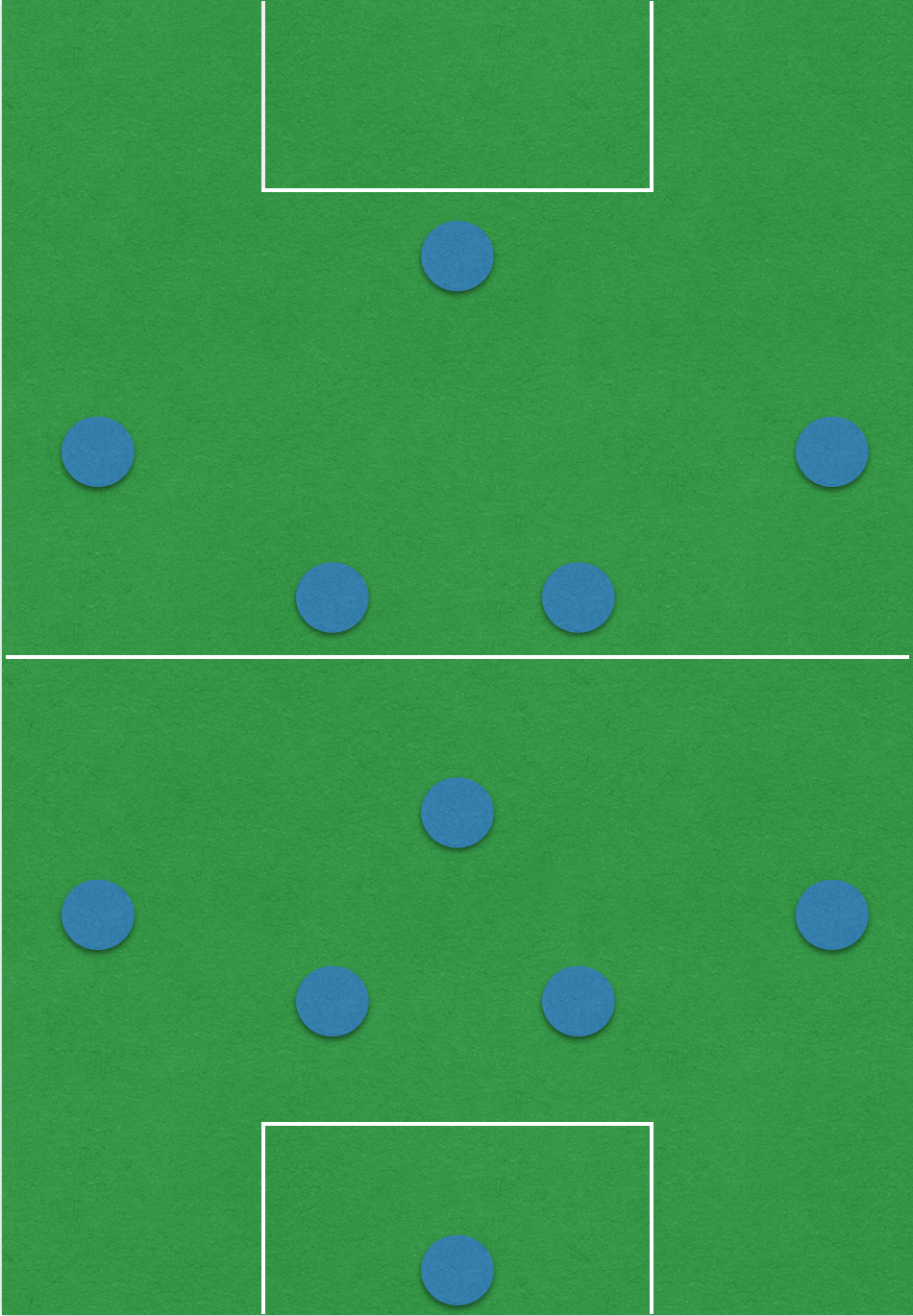 This formation ends up morphing into a 3-3-1-3. The holding midfielder – Kalvin Phillips, but more recently Adam Forshaw – drops in between the centre-backs while the full backs push on. One of the central midfielders, usually Mateusz Klich, operates as more of an all-action midfielder in the second line of three with the full backs.

The other operates as a number 10, although these positions do sometimes rotate. The number 10 was Samuel Saiz until he was frozen out of the team. Pablo Hernandez and sometimes Klich take up that role now. The transition between formations can be seen below. 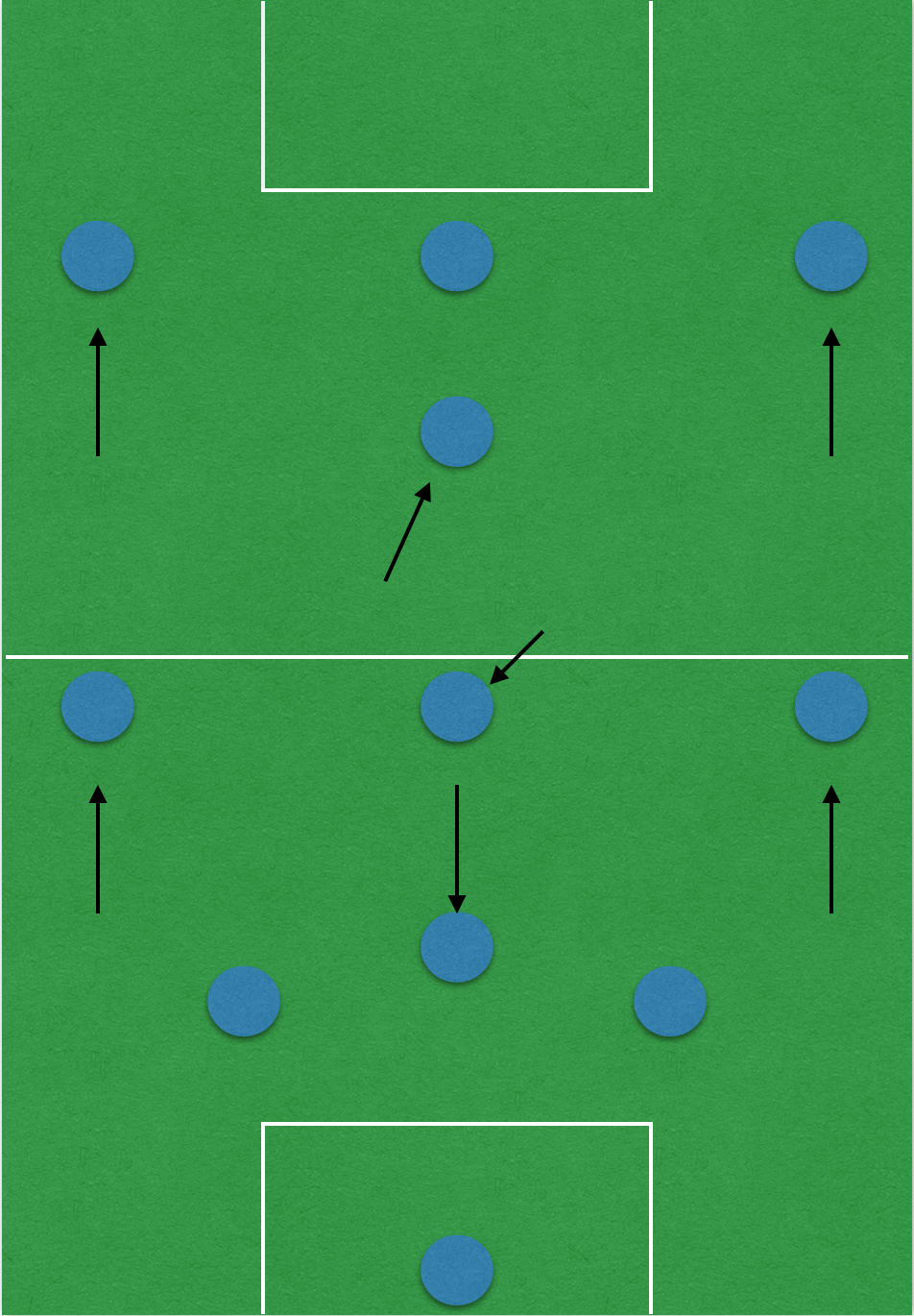 The three-man back line operates as the base for the build up. Bielsa prefers his side to play out from the back. The number 10 looks for spaces between the lines, while the high full-backs (essentially wing-backs) and attacking wingers offer plenty of width in attack.

In defence, the 4-1-4-1 shape makes more of a return. The ferocious press does, though, see players push up to operate this, particularly the wingers when pressing the backline. Defensive stability is still offered by the deep midfielder sitting in front of the back four. The two central midfielders offer good cover in the middle of the park.

Bielsa sides are revered for their highly intensive press. While it is often touted as a reason for Leeds’ current injury problems and previous end-of-season fatigue issues with Bielsa’s teams, it is working a treat for the Whites in the Championship. Their pressing of Nottingham Forest’s backline can be seen here below. 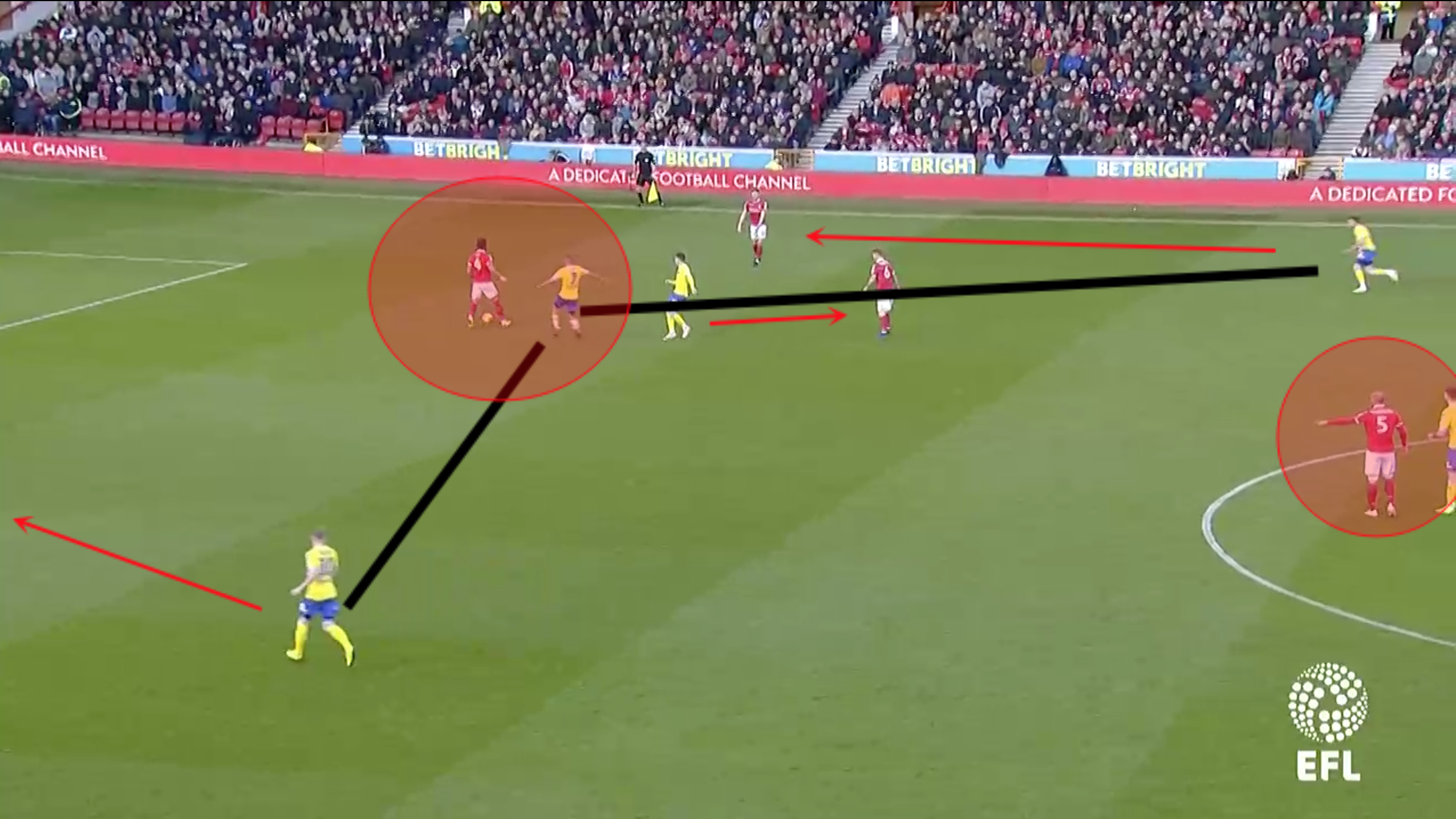 Centre forward Kemar Roofe leads the press on the man on the ball. Behind him, Pablo Hernandez (operating as the number 10 that game) has Forest’s deepest lying midfielder covered to break up the link to midfield. The wingers – Jack Harrison on the right and Ezgjan Alioski on the left – are in position to quickly close down any wide options for the Forest player in possession. On the halfway line, central midfielder Klich is marking another Forest player, further halting build-up.

In this instance, Leeds have shut down all available options for Forest. The man on the ball is being pressed. His wide options are being closed down, and his forward option is marked, as is his longer option in the centre circle. Indeed, Forest are forced into losing the ball just a few seconds later.

The main threat of Leeds press, however, is directly after they lose the ball. The ferocity in which they hunt down players in their attempts to retrieve it is remarkable. It is another key feature of Bielsa’s sides which makes them so formidable to face. It is a system that has helped them keep their opponent’s possession at an average of 38.5% so far this season.

It’s no surprise that a clip of seven United players racing back to stop a Wigan counter attack from a corner went viral. It is a vital part of the way Leeds play.

Leeds typically fall back on their 4-1-4-1 shape when defending. This is, however, liable to shift due to a focus on high intensity pressing to win the ball back. As can be seen in the figure below, left-back Barry Douglas has rushed out from his position to close down a Forest player after Forshaw has been bypassed in midfield. 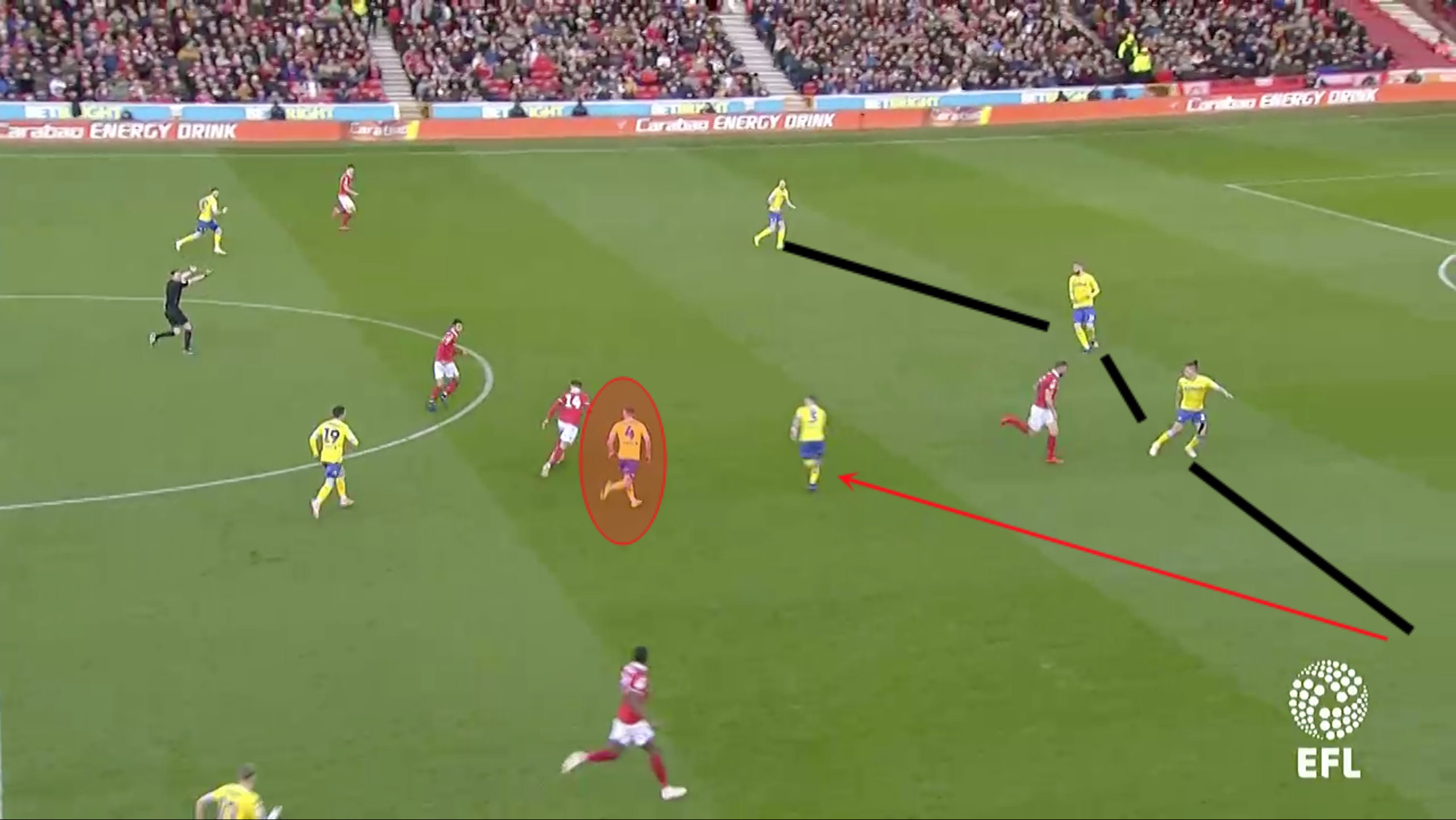 This style of this defending helps United to restrict the opposition’s possession, and forces them into difficult situations. The aim – as is the case with intense pressing – is to win the ball back as quickly as possible. The intention is to start an attack from a potentially more dangerous position. Bielsa has instilled a hunger for the ball in his side.

The danger of course is that should the press be bypassed, Leeds leave themselves in a very vulnerable position. In regards to the image above, Douglas has left a large gap on the left wing that could easily be exploited.

Below, though, we can see that the ferocity of Douglas’s press is such that the Forest midfielder is forced to play the ball to the opposite flank, where right back Luke Ayling is able to retrieve it. This situation demonstrates the effectiveness of the system. If it does go wrong, however, there is a massive gap in the defence left. 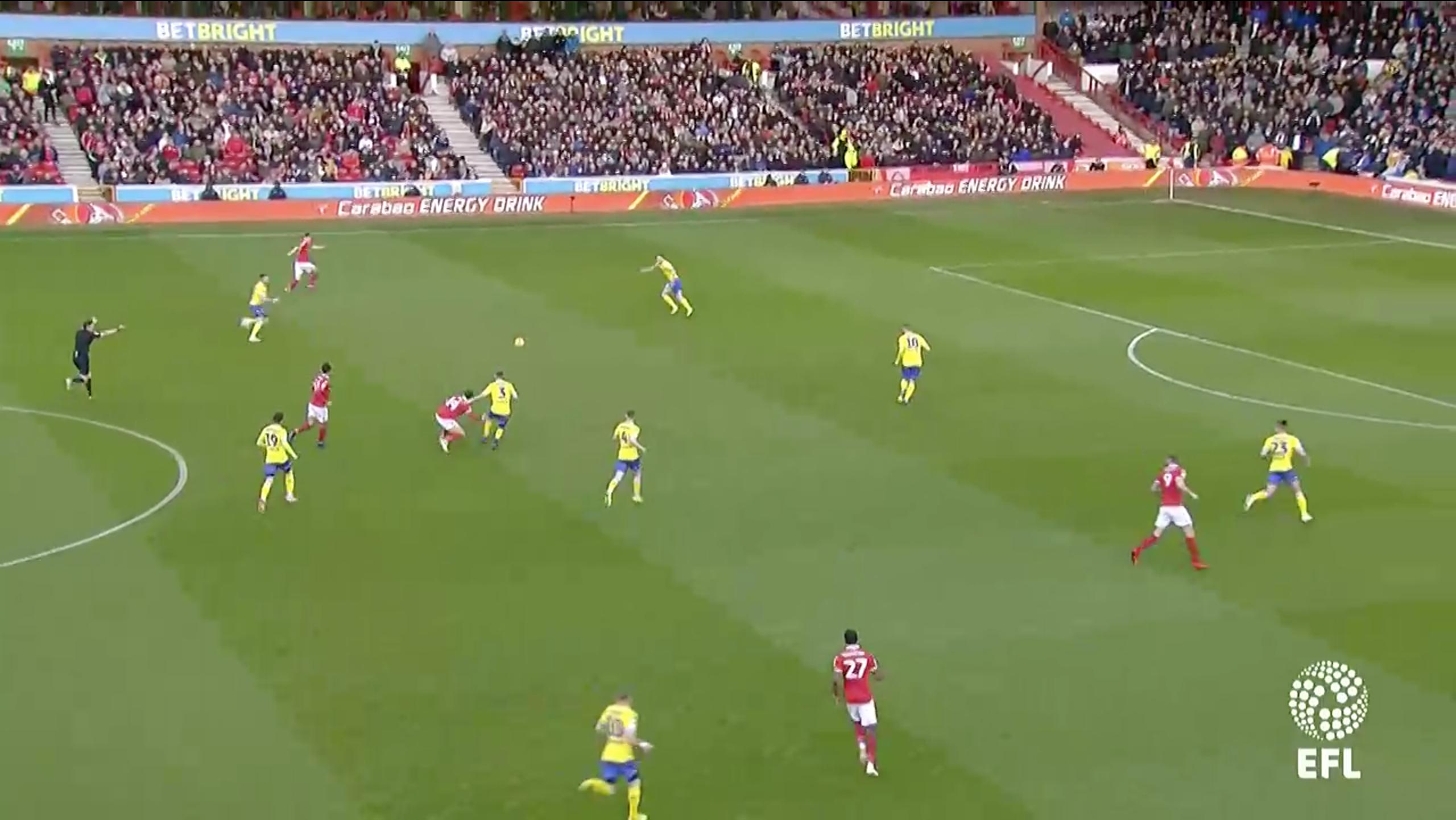 Quick, on-the-floor football is what is often associated with Marcelo Bielsa, as well as a highly intensive press. At times this season, Leeds have displayed just that, exquisitely working quick chains of passes between players.

This can be seen in the image below. A neat interchange between Ayling and Hernandez precedes the latter playing a one-two with Saiz. The arrows show the movements of the players and the ball as Leeds work it into the area. Saiz’s shot is eventually blocked on the line. 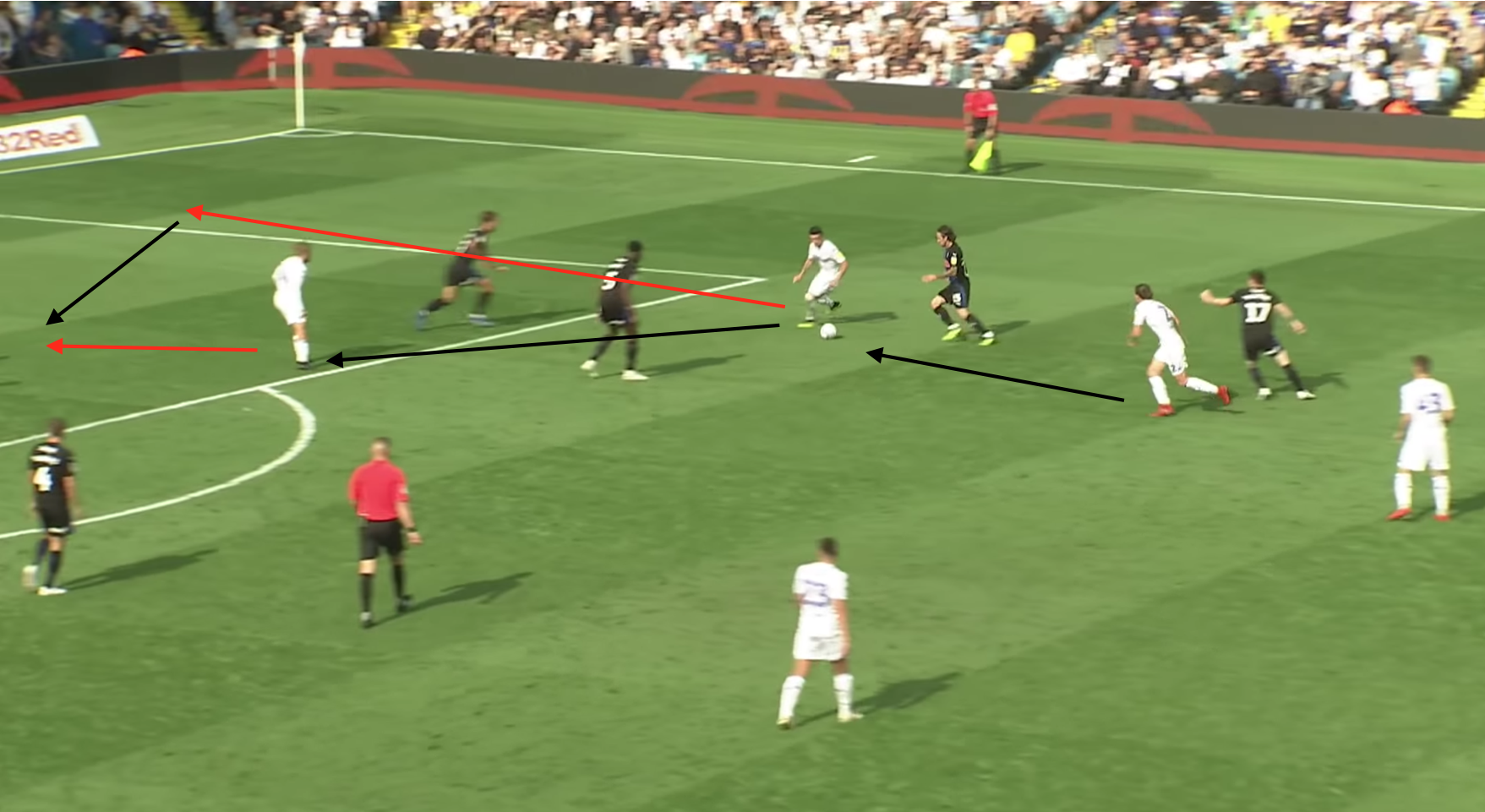 United also play with substantial width too. High wingers and full-backs allow Leeds to stretch their opposition in attack. We can see below that right-back Ayling is pushing high past the winger Alioski. This either forces the opposition to spread across the pitch leaving more space, or pulls an opposition to one side which allows a switch of play. 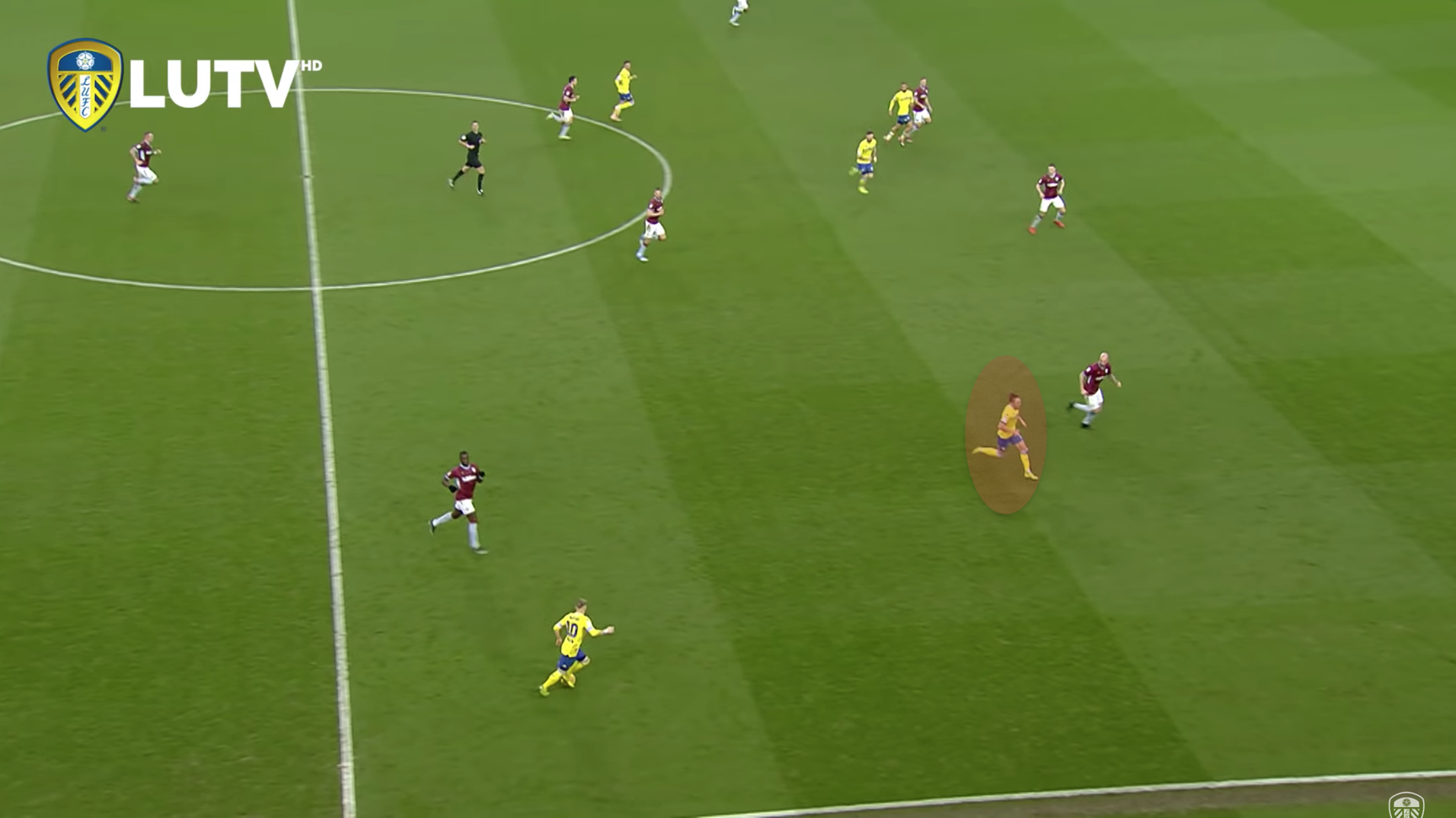 In the above instance, the switch of play is utilised. This directly leads to Jack Harrison having space to cut in from the left wing and score for United. There is a multi-faceted nature to the Whites’ attack that sees them perform intricate passing play as well as stretching an opposition across the pitch.

Leeds are proving to be an exciting side in the Championship this season. The high tempo and frenetic style that Marcelo Bielsa has brought to the club is one that is never really seen in England’s second tier.

The focus is on attacking football and winning the ball back as quickly as possible to enable more dangerous starting points for attacks. They attack with quick passing but are also willing to spread or switch play when necessary.

United’s defence is mainly reliant on their aggressive press, which starts from the front. There is a dogged and driven determination to win the ball back as soon as it has been lost. Leeds players can often be seen swarming their opponents in an effort to retrieve the ball back as quickly as possible.

These are all key features of the Bielsa style, a mythical name that immediately pricks the ears of football geeks. His style has been successfully implemented at United, and there is every chance that they will achieve promotion this season. Should they do this, a Marcelo Bielsa side in the Premier League could prove to be very exciting.