Since Arsene Wenger’s departure last summer, a number of Arsenal‘s academy graduates have been showing their worth to new head coach Unai Emery. While Reiss Nelson has displayed moments of brilliance during his loan spell at Hoffenheim, the Europa League has given Emery the chance to blood some of the club’s other youngsters.

Emile Smith-Rowe got supporters talking from as early as pre-season with a goal against La Liga giants Atletico Madrid. Joe Willock and Eddie Nketiah have followed on from last season’s sporadic involvement. Perhaps the most exciting player to emerge from the youth teams this term, Bukayo Saka, has shown huge promise. In this individual tactical analysis, we’ll discover why fans are so excited.

Despite being eligible to play for Nigeria, Saka was born in London. He joined the Arsenal academy at the age of eight and began representing England at under-16 level. Having only signed his scholarship deal over the summer, Saka has seen himself fast-tracked into the first-team set-up for this campaign.

He has played just over 650 minutes for Freddie Ljungberg’s under-23s, scoring two and assisting three. He has also risen to England under-19 level in the space of just a few months, even scoring on his debut against Moldova.

His involvement with Unai Emery’s senior team has been minimal so far but nevertheless impressive. Saka’s first start came against Qarabag in the Europa League, earning the man-of-the-match award for his performance.

“It’s a dream come true. I didn’t start too fast but I grew into the game, started to beat my man and create chances.”

On New Year’s Day, Saka reached another milestone by making his first appearance in the Premier League, becoming the first player born in 2001 to do so.

Against Qarabag, Saka operated mainly on the left wing in a 4-3-3. However, he regularly switched flanks, and even looked to receive the ball in the 10 space on occasion. The heat map below illustrates his positional fluidity during that game.

Although predominantly left-footed, the England youth international is also comfortable with his right. His qualities in 1v1 scenarios, as well as his ability to create and score goals, make him adaptable to a variety of roles. While he mainly operates as a wide-man or number 10, he can also fill in effectively at left-back.

This level of versatility should serve him well when it comes to gaining first-team minutes. However, his talents are likely to be exploited in a more attacking position as he continues to develop.

While Saka has shown qualities in defending 1v1s while playing at full-back, his real talent shines when he’s on the other side of a duel. With exceptional close control, he can play a direct game against opponents, running at them with the ball or slaloming through a crowd of defenders. His quick feet make the challenge of stopping him even more daunting, and he regularly ‘fronts up’ his man before using trickery to bypass him.

Saka is also quick and can vary his play between dribbling infield or beating his defender on the outside. The variety he has to his game makes it extremely difficult for defenders to stifle him. If they show him inside, he can invert his dribbling before taking a shot or playing a through ball. If they decide to show him down the line, however, he can use pace to get beyond players before delivering a cross.

Against Qarabag, he completed eight take-ons. The first image below shows Saka running at his man. In order to exploit the space and provide a cross or a cutback, he dribbles towards the defender first to try and take him out of the game. 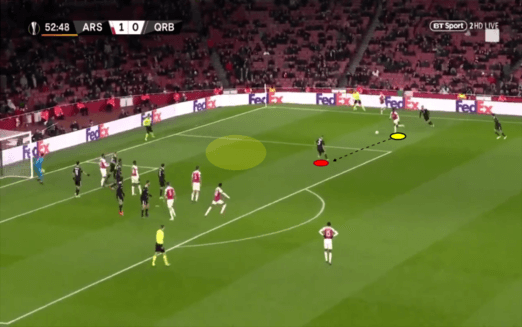 Once he reaches his defender, he completes a step-over to unsettle him and draw a defensive action before pushing the ball into space. 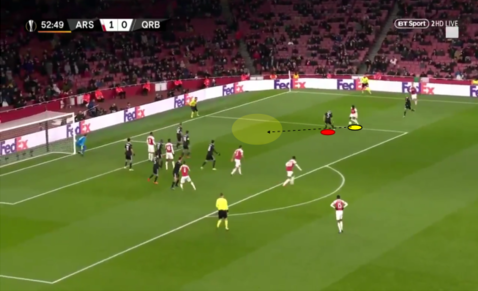 Saka’s pace allows him to get past the defender with ease. He now has the opportunity for a cross to the front post, or a cut-back. 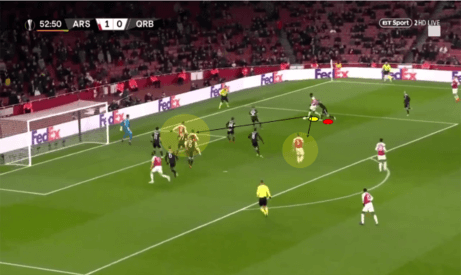 These natural winger qualities, the ability to exploit 1v1s with pace, close control, and trickery, have been lacking in the Arsenal side in recent years. Emery clearly acknowledges this and appreciates what Saka can bring to the team:

“His personality is very important for us, to continue trying to go one v one and break lines with his quality.”

Saka’s ability to go beyond defenders with the ball using his natural talents means he consistently finds himself in goal scoring or creating positions. His final product is, therefore, an essential element to his game and one that should continue to improve as he matures. Against Qarabag, Saka had four shots on goal, three of which were on target.

He also completed 101 actions, 34 more than the team average. Although he hasn’t yet recorded a goal or assist for the first team, he did set up Eddie Nketiah to find the back of the net. Unfortunately the striker had mistimed his run and was called offside. The quality of the cross remained noteworthy and it only served to further outline the variety to Saka’s game.

The first image below shows him once again fronting up a defender, this time on the left wing. With the centre congested, he decides to beat his man on the outside. 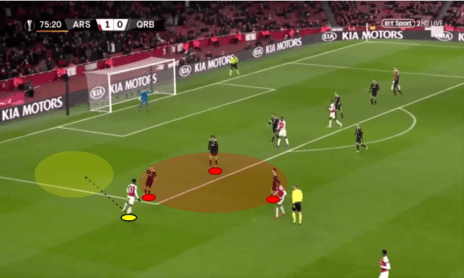 He dummies to move infield, moving his opponent just enough to be able to bypass him in the opposite direction. 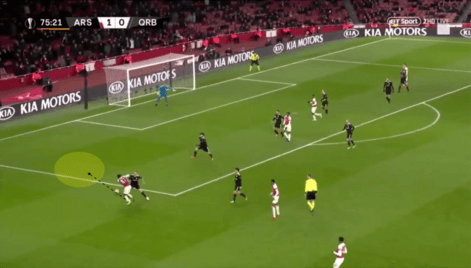 Having got past his defender, Saka picks out the striker with a pin-point cross. 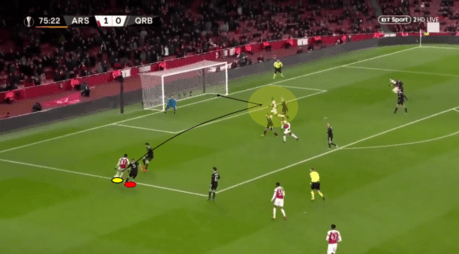 Saka consistently shows the ability to recognise where the space is and choose the best route available. Additionally, defenders often choose to double-up on him, creating space elsewhere for teammates.

His ability to suck defenders in before manipulating the ball quickly and evading pressure makes him highly effective out wide. However, the same qualities can be utilised in central areas, with similar benefits. Beating players out wide generally requires less press resistant abilities given that there’s usually more space to work with.

In the image below, Saka has moved into the 10 space to receive from Joe Willock. Recognising the threat, the opponent’s defensive midfielder moves towards him while the ball travels. 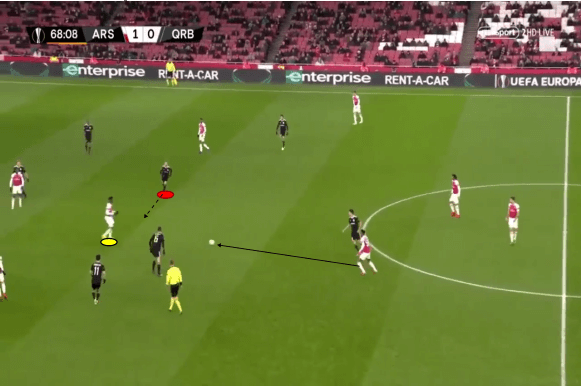 Yet again, Saka recognises where the space exists and quickly decides on a strategy to get there. He draws pressure from the opponent while turning as he receives. 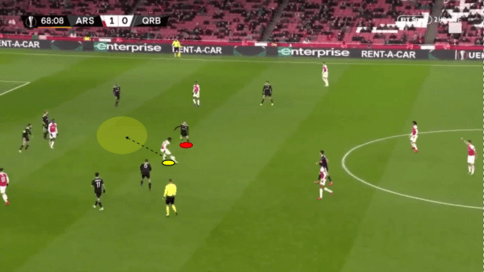 His resistance to pressure sees him break beyond the defending player, with space to run at the defence. In this sequence, he chooses to shoot from long range, forcing a save from the Qarabag goalkeeper. 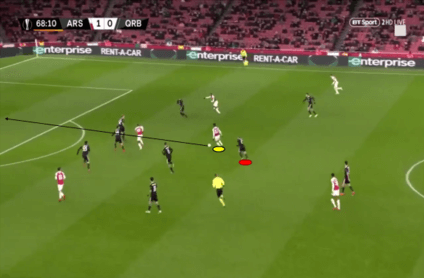 Saka’s ability to play in tight spaces, and exploit space with speed and dribbling, makes him a comprehensive talent. He could develop into a midfielder or a winger, with his creativity also a notable aspect of his profile. However, perhaps a more fluid role, where he can utilise all his qualities, would suit him best. When the space is out wide, Saka has the tools to exploit it. When the space is between the lines, the same applies.

Having only recently signed his first professional contract, Saka is still a raw talent. Although he’ll need time and patience to become a complete player, he already has a wide range of abilities. Combined with the confidence and composure he has already shown, Saka appears to have a very bright future.

With the January transfer window upon us, Arsenal have been linked with a number of wingers. However, perhaps the Gunners would be wiser to invest faith in one of their own.