This was a big game for both teams, but even more so for Manchester City. Pep Guardiola had to face one of his football nightmares, Jürgen Klopp, one of the few coaches that has a positive record against him. The result was one of the best tactical shows you can have in today’s football era. More importantly, Liverpool were seven points ahead in the table, unbeaten this season, and losing against them would mean a possible early goodbye to the Premier League title for Manchester City.

The game didn’t disappoint. Both teams showed an outstanding quality of football, despite City having two of the last three Premier League matches against Leicester City and Crystal Palace. In this tactical analysis, we show how Manchester City managed to beat the league leaders, Liverpool, and step back into the Premier League title race.

In previous games, Pep Guardiola had been quite inconsistent in his tactical approach against Klopp teams. Perhaps this is because of the difficulties he has had to beat them. Looking for ways to diminish their intense pressure and their attacking strength, the initial set-up and player selection had varied a lot.

This time, he opted to play closer to what is considered normal in terms of tactical approach and the type of players chosen. In that sense, Manchester City started with a classic 4-3-3, with some surprises in the defence. Danilo and Laporte began as wing-backs, and regular names in the remaining positions. Fernandinho resumed as the defensive midfielder, with David and Bernardo Silva the inside midfielders and Sane, Aguero and Sterling in attack.

The first seven minutes were hectic. Insane pressure resulted in constant changes in possession, blocking both team’s creative ability. This resulted in both sides making several mistakes on the ball, or just losing the ball under pressure. It also meant that most of the game developed close to the middle of the pitch without clear goalscoring chances.

After this initial stage of high pressure, both teams started trying to inflict damage the way they usually do. Manchester City kept possession, rotating the ball looking to create spaces. Liverpool meanwhile produced very fast transitions and tempo, looking to win the 1v1 duels that they were able to create.

The intense pressure imposed over the creativity of both teams, however. The resulting game had only 15 shots on target, nine for Manchester City and six for Liverpool. This is an uncommon and below average figure for two very attacking teams. Even though Pep Guardiola’s team had more shots, xG for Liverpool was higher at 1.22 compared to Manchester City’s 1.05. Liverpool had few but clearer chances, as Manchester City had issues getting closer to Allison’s goal, forcing them to try long shots as a way of attack.

Key to avoiding the attacking strength of Liverpool was Fernandinho. With the Brazilian back as the sole defensive midfielder, he had a key role in today’s game. He stepped high up the pitch to put pressure on the initial build-up phase of Liverpool, recovered key balls in front of Manchester City’s defensive line, and helped the defensive line when outnumbered by Liverpool.

According to Wyscout, he recovered 14 balls, the highest of both teams and well above his 2018 average of 10.17. This is a warning flag for Guardiola, who has not been able to find a replacement matching Fernandinho’s quality. Stones and Gündogan have been tried without success during the last month. The Brazilian is now 33 years old, and it should become a priority to find a replacement for him during the next transfer window.

Even though City were controlling the game, they weren’t able to get the ball closer to Allison’s goal. Previous games had shown that the most effective defensive setup for Klopp  against Guardiola, was a five-man midfield. This system leaves the central midfielder as a free man to help to cover spaces won by Manchester City.

Jordan Henderson had performed this role brilliantly before, but yesterday Klopp decided to position the team higher. The three forwards pressed high up, supported by a second line of three in Wijnaldum, Henderson and Milner. These three had to cover larger spaces, making it more difficult for the Reds to block City’s build-up phase. Liverpool were subsequently forced to be a larger team than they usually are.

Bernardo Silva caught this movement and did an excellent job of pulling Milner and Henderson far from their defensive positions. This left larger spaces between them and Liverpool’s defensive line to be exploited.

The Portuguese is playing at a superlative level. He doesn’t have as notorious a role as his teammates, but shows an outstanding tactical intelligence to disarm the rival’s defensive shapes. Unusually for a more creative player like him, he also contributes to the defensive performance of the team. 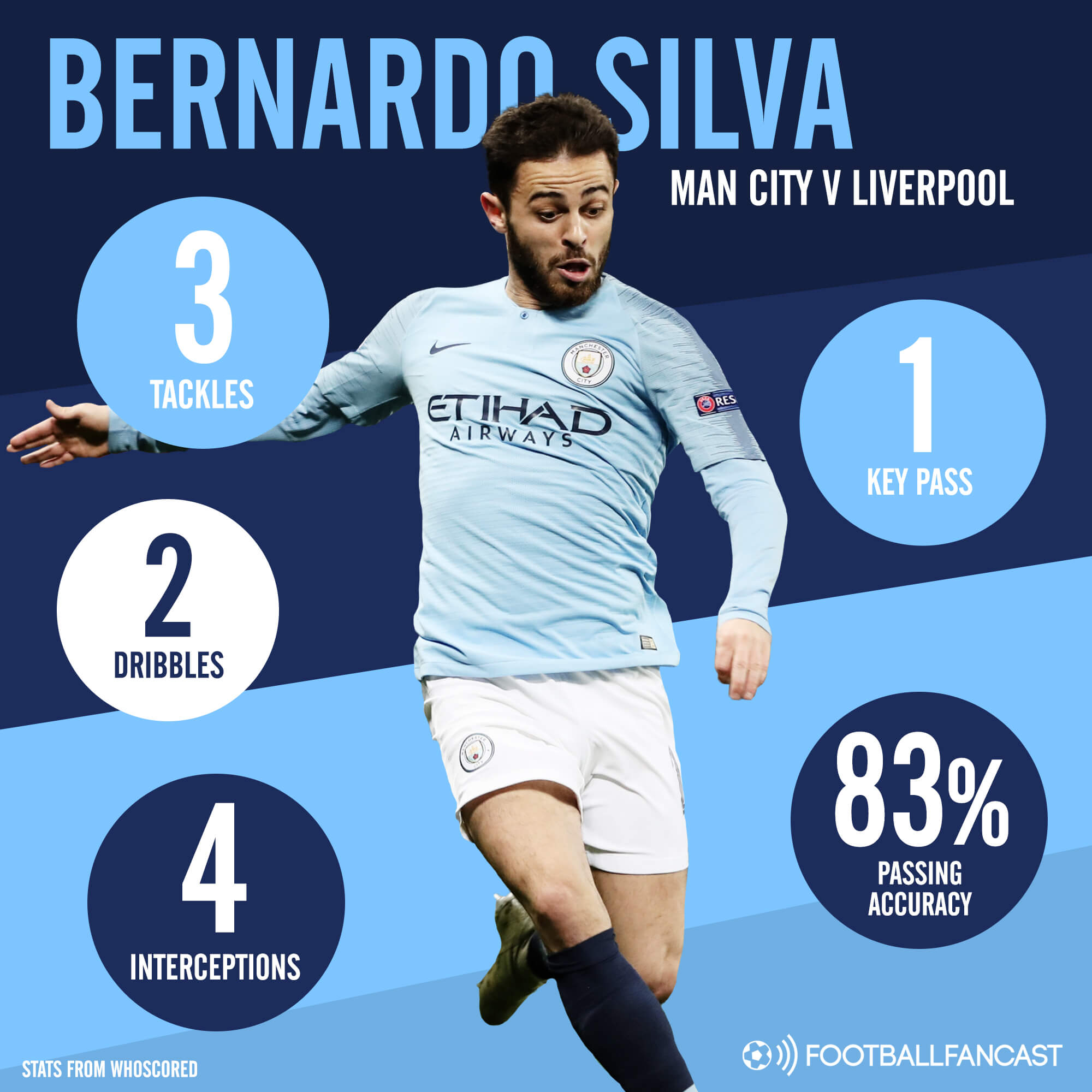 According to Wyscout, he recovered 10 balls during the game, the second most of Manchester City after Fernandinho. He was also the player that covered most distance during the game with 13.7km.

The larger spaces left between Liverpool’s midfield and the defensive line was smartly exploited by Aguero, also a key player in the game. He swapped positions excellently with David Silva, the latter positioning himself closer to the central defenders. This let Aguero fall back to connect with the build-up phase of Manchester City, receiving with enough spaces to turn around and increase the tempo of the attacking phase. As mentioned before this didn’t translate in clear chances for Pep Guardiola’s team. It was, however, enough move the build-up phase closer to Liverpool’s defensive line.

Having Manchester City more comfortable allowed them to score the opening goal. A weak defensive action by Lovren was anticipated by Aguero and finished by the Argentinian with an unstoppable shot just before half time.

The second half started in a similar tone, which favoured Manchester City. They maintained good possession and didn’t let Liverpool shoot with danger at Ederson’s goal. The Brazilian goalkeeper had a decent game with the ball in his feet but didn’t provide a lot of comfort with his hands. He made some doubtful decisions on high balls, and a lack of communication with Stones that almost ended up with an own goal by the goalkeeper.

Laporte’s positioning as left-wing back was surprising, and his performance was not stellar. It is a position he has played a few times only, and even though Mendy is injured and Delph was suspended, Guardiola still had Danilo and Walker as alternatives, although none of them is left-footed as Laporte.

Maybe the reason is just because of that left foot restriction, but my feeling is that there was something else. Given how City was able to break Liverpool’s lines, it made sense to use a left-wing back that would attack less, as it actually happened. This relieved Salah from more defensive duties and resulted in fewer Liverpool players in the middle. Whether that was the reason or not, that actually happened and was a plus for Manchester City.

When City were more comfortable, Liverpool were able to cross twice. Kompany lost Firmino’s mark and let the Brazilian score an easy header for Liverpool. The game was turning in Liverpool’s favour, with City positioning higher under the pressure of having to win. This allowed them to quickly counter-attack a slower defence, the same way they had for their few clear occasions in the first half.

But Liverpool had their own medicine. After a quick recovery by Ederson, Manchester City needed only two passes – from Danilo to Sterling, and then to Sane – and a very smart distracting movement by Aguero to score the second goal and give Manchester City the edge. The German didn’t actually have a great performance. His passing and control was imprecise, but he finished a well-constructed attack beautifully. The last 20 minutes was mostly Liverpool trying vainly and without clarity to equalise, mostly with long shots and crosses that were comfortable for City’s defence.

After the negative run that Manchester City went through, Aguero said in an interview that they had to back to their basics. They did that, maybe without the attacking depth one is used to seeing in them. In front they had the best team of the Premier League, and they couldn’t afford to lose again. Manchester City played a smart game and earned three points that put them back in the race.