Brexit has had a huge impact on life in general within Britain. There are very few areas that this political decision has not touched. With that said, however, it has surprised many just how much Brexit has affected football within Britain. For a long time, teams in England, in particular, were capable of raiding the talent hotbeds of European football and strengthening their club with young and talented players. The new rules regarding the right to work in Britain have rendered many players ineligible for registration in England.

We should pause for a second to point out the fact that the rules governing the transfer of players to Scotland are slightly more flexible than those that control the right to play in England. This has given Scottish clubs slightly more flexibility in terms of the players that they can target and sign.

One byproduct of the new rulings, however, has seen the opening up of the South American market for recruitment into England. Previously, it was easier pre-Brexit for clubs to get work permits for young players in the EU but to do the same for South American young players was a more difficult task. Now, the situation has been reversed.

This summer we have seen interesting moves from English sides as Norwich City have signed the Chilean international midfielder Marcelino Nunez, a midfielder that we had previously picked out as one to watch in this data piece,  as well as the Brazilian, Gabriel Sara.

In this article, we use data analysis to identify five players who are 21 years old and under and who are still playing in South America that we believe will move to Europe sooner rather than later. All of the data and statistics that we use in this analysis are from Wyscout but have been converted to percentile rankings before being visualised using a pizza chart. 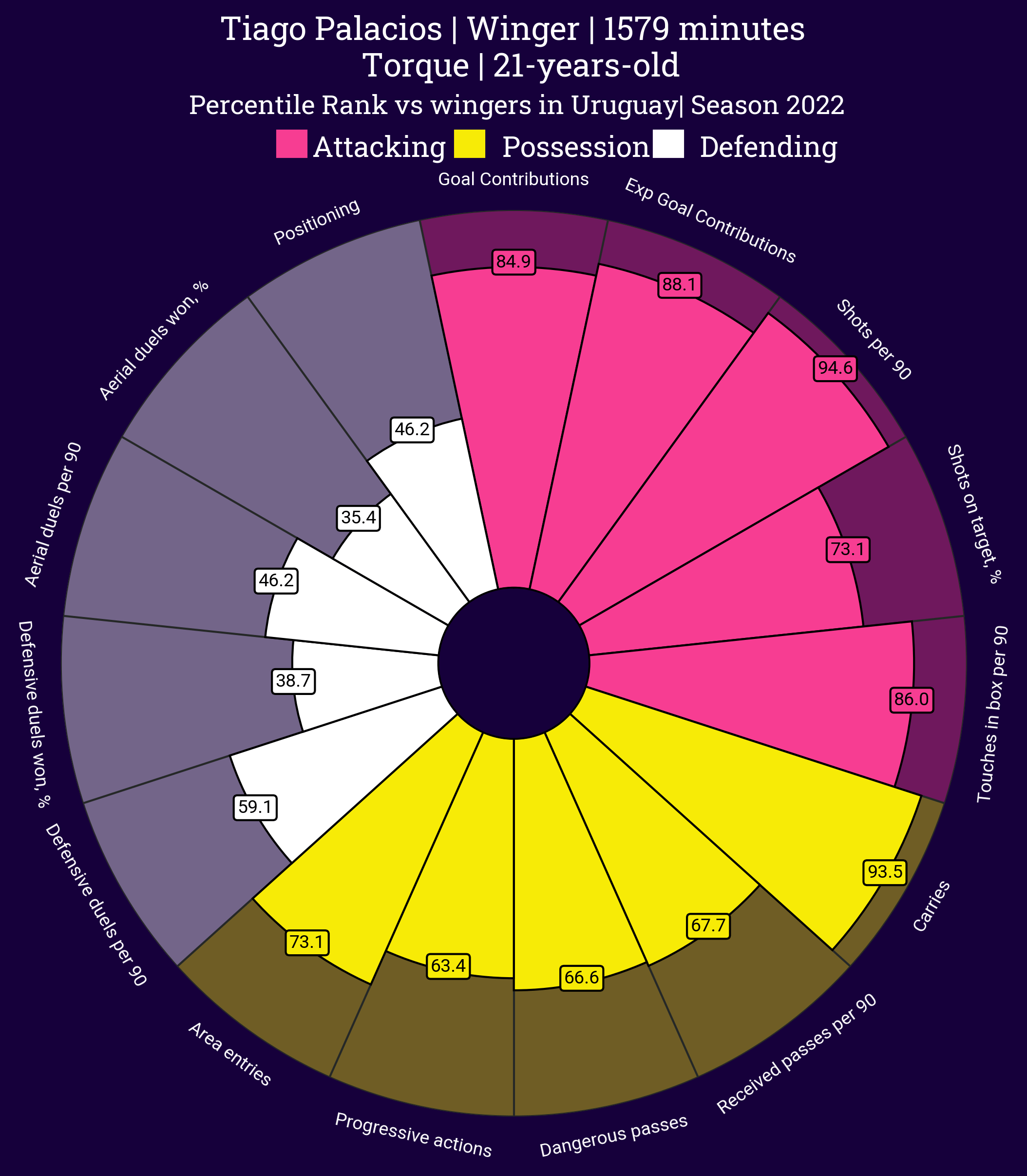 The first player on our list is the 21-year-old Uruguayan winger Tiago Palacios of Torque. Palacios is a naturally left-footed wide player who likes to play from the right of the attack from where he can attack inside to threaten the penalty area. He is also capable of playing as a central striker.

He was initially developed at the youth academy of Platense before moving to Torque although it is unlikely that he will stay at the club over the long term, despite signing a relatively long contract. Palacios is a direct attacking threat in that whenever he takes possession of the ball his first instinct is to drive with aggression towards the opposition goal. He is powerful and quick, with the ability to carry the ball dynamically through the thirds.

Crucially, Palacios is quick when driving forward into open spaces but he also retains his quickness and his explosive movements when being engaged and having to play in tighter areas in the final third or penalty area. He is very elusive on the ball and he displays the ability to slow the game down and almost pause on the ball before then exploding inside or outside. This is one of Palacios’ strengths in that he can attack the defender on the inside or the outside.

Despite being a relatively recent signing for Torque, we think that Palacios is a player who will be looking to move to European football in the short term. 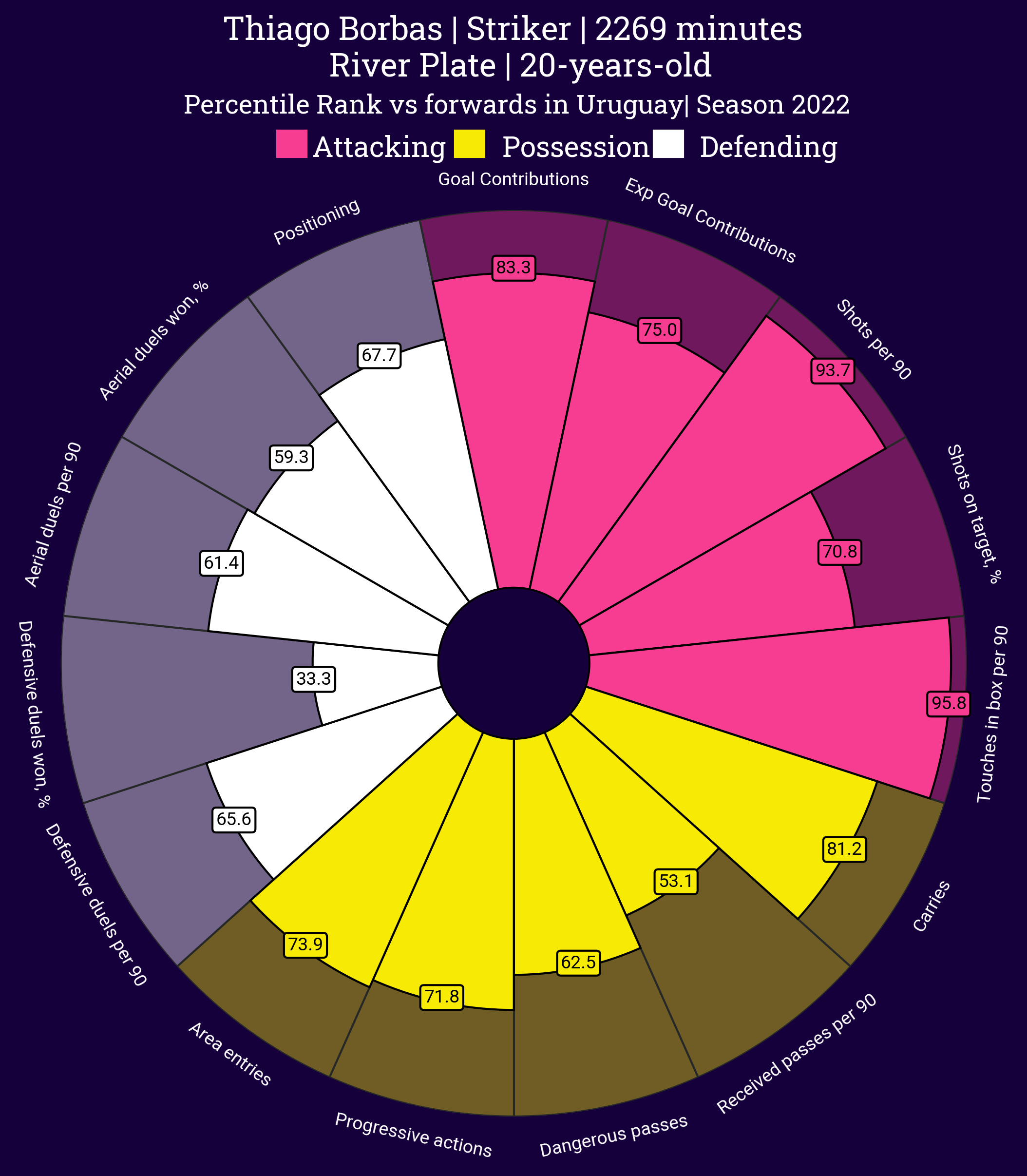 Let’s stay in Uruguay for our second player as we look at the 20-year-old River Plate (the Uruguayan one) forward Thiago Borbas. He is a naturally right-footed player who has all of the characteristics to play as a striker at a high level. He is powerful and quick with a broad frame and the ability to accelerate quickly from a standing start. He likes to play on the shoulder of the defender as he looks for opportunities to break in behind the defensive line.

Borbas is a product of the youth academy at River Plate although it feels almost certain that he will look for a move at the end of his current contract.

In terms of style, Borbas is the kind of striker who can score from a variety of positions and situations. He has the ability to come deep to link play and he also provides a threat with the ability to strike from distance. His biggest strengths, however, are his anticipation and ability to position himself in areas that are difficult to mark as he positions himself on the blindside of the opposition defenders. 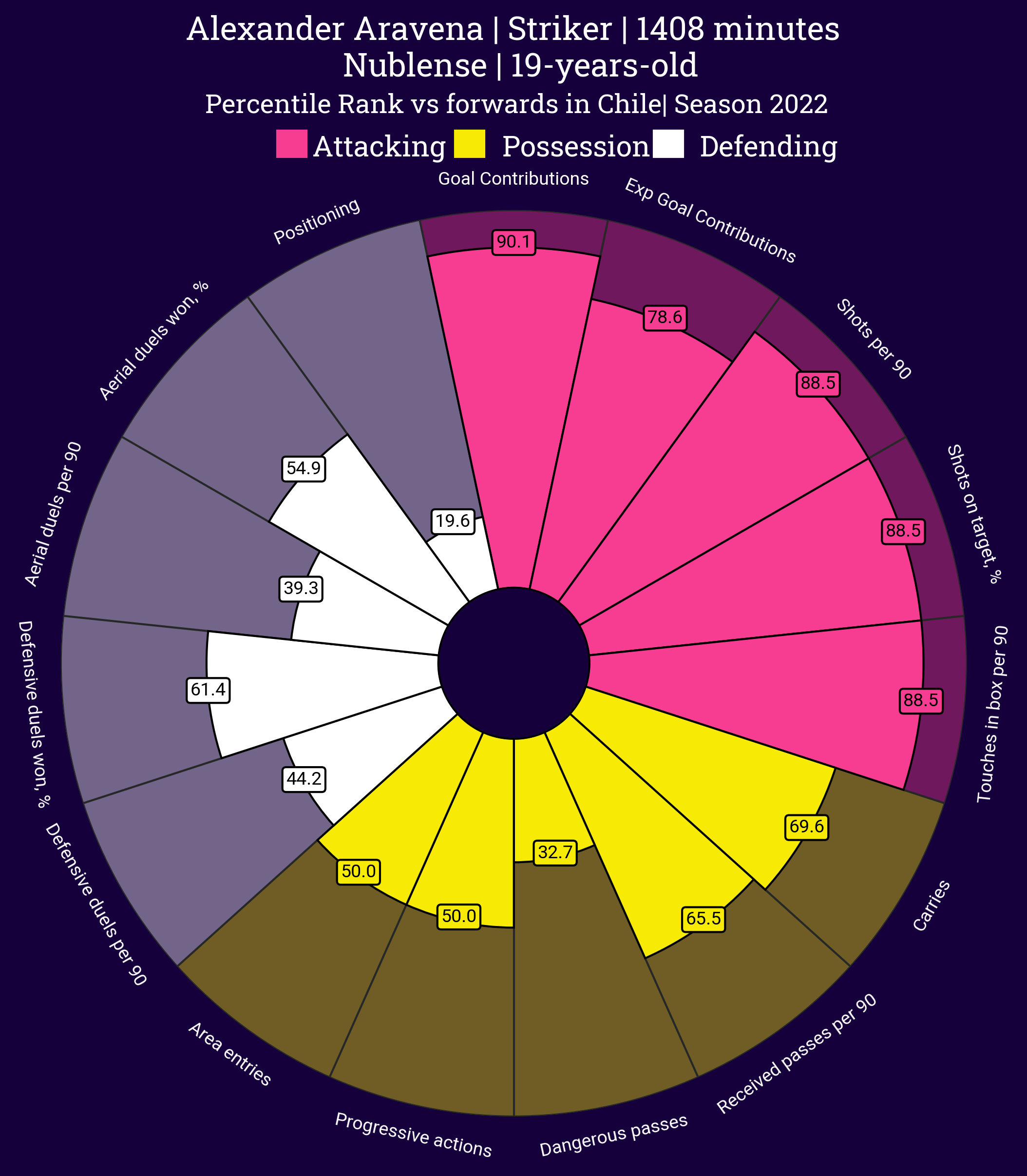 Our next player is a youngster who is actually out on loan this season – the 19-year-old Chilean forward Alexander Aravena. He is currently on loan in the Chilean top-flight at Nublense from his parent club Universidad Catolica. Aravena is a versatile and mobile forward player who plays as a central striker at Nublense, although he spends a lot of his time in the half-spaces from where he can receive the ball.

Aravena is a product of the youth academy at Universidad Catolica and he has represented Chile at the U17 level.

His biggest strength lies in his anticipation and movement in the final third. He understands how to pull away from the shoulder of the defender in order to give himself space to receive the ball and when he has a yard of space, he is exceptionally difficult to stop. He steps across defenders and is not afraid of initiating contact as he moves through on goal. 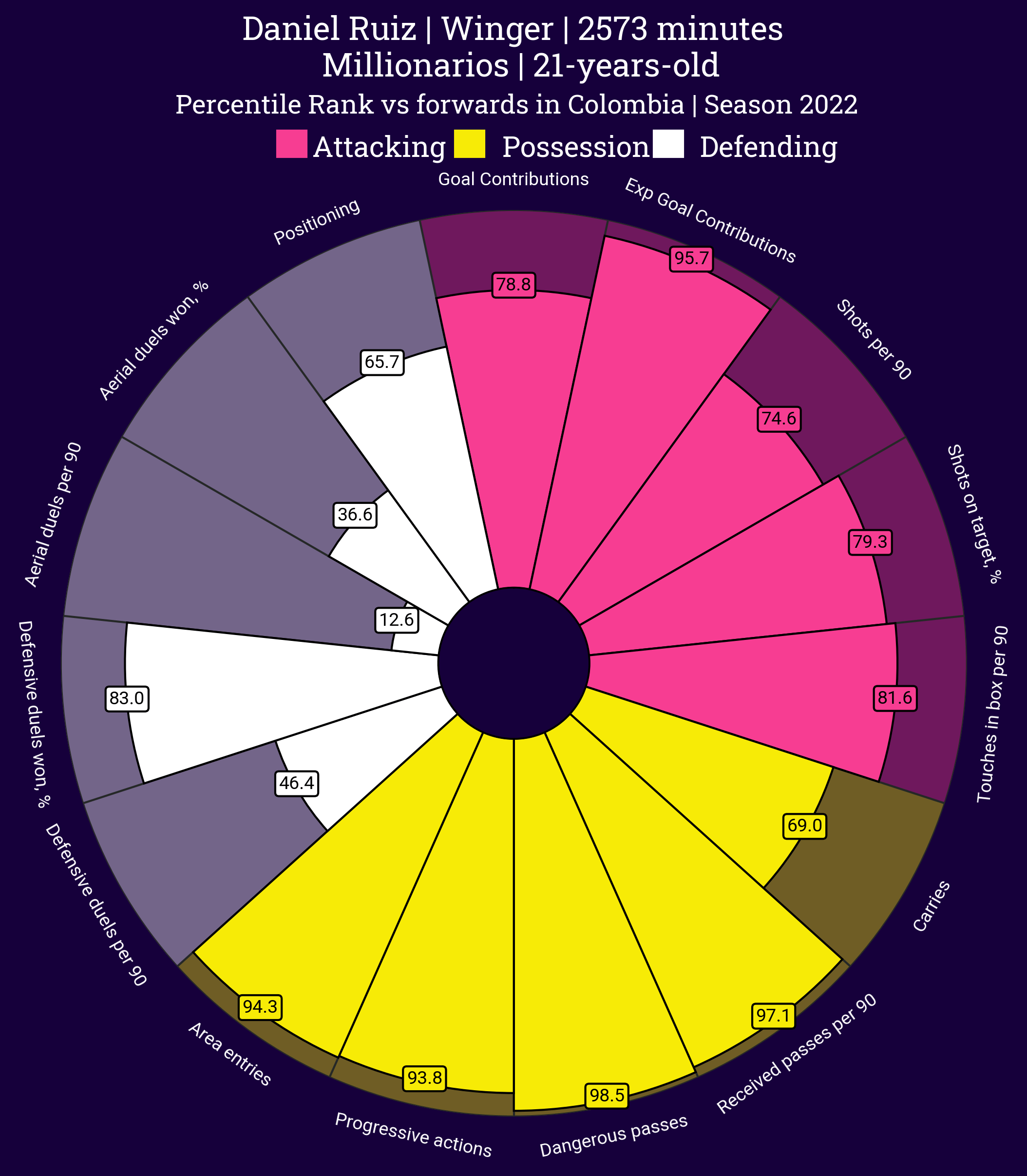 Daniel Ruiz is a 21-year-old Colombian winger who is currently contracted to Millionarios in Colombia’s top flight division. He is a playmaking wide player who is more likely to progress the ball through his passing and vision as opposed to carrying the ball and attacking players in 1v1 situations.

He is somewhat unusual in that he is naturally left-footed but he wants to play on the left-hand side. He tends to drift inside into the half-spaces or even the central areas and he has real ability and vision on the ball. He is equally capable of switching play via long diagonals or shifting the angle of the ball and finding creative ways to break the last line with through balls. From a technical perspective, he is already more than capable of playing in European football. 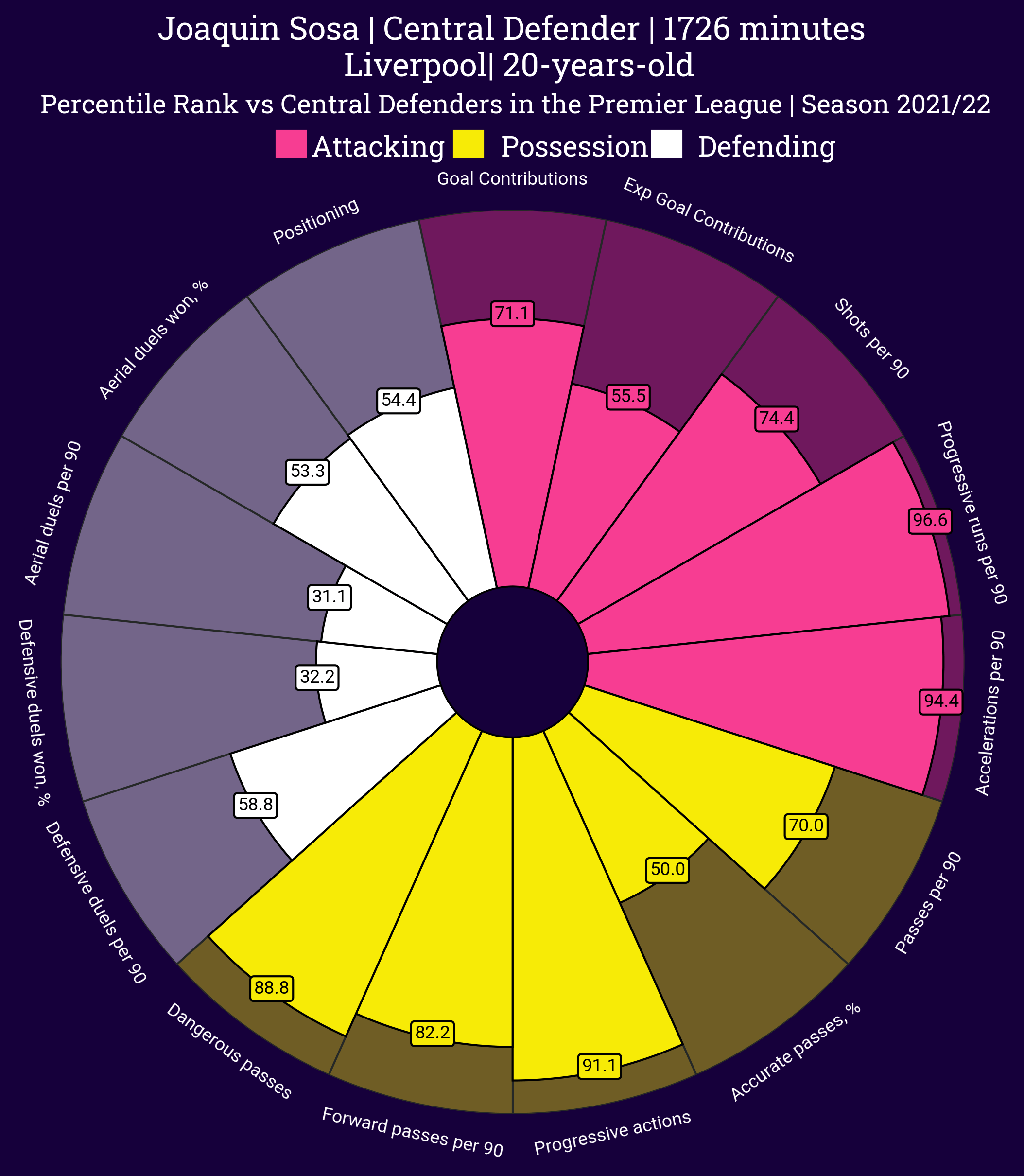 Our final player, and the only central defender on our list, is the 20-year-old Uruguayan Joaquin Sosa. He is currently on loan at Liverpool (the Uruguayan one) from Nacional and, as a naturally left-footed central defender who is progressive in his approach, he holds interesting value.

Sosa tends to play at club level on the left side of a back three and, as is so often the case today, he is very comfortable when carrying the ball out or progressing it and breaking lines. He has the ability to play long switches of play from left to right but he is also a threat when it comes to driving forward in possession of the ball himself.

There is a huge amount of talent within the South American market. The trick is finding the methods to accurately identify those players who have the correct profile for your club. By using data, we can cut through a lot of the noise in order to find the players that fit the specific playing style that we are looking for.