In the second of this series of articles looking at young players to watch in 2022, we will turn our attention towards midfielders. This time we have selected a variety of players from different nations and regions around the world, and who play in slightly different positions to one another. We have not limited ourselves to just players who will play centrally and act as metronomes for their teams. Indeed, at least one of our selections may develop into a player who is better suited to playing wide in the attack.

All of the data used in putting together this article comes from Wyscout with the visualisations being custom built by myself using Tableau.

This article is not intended as a definitive list of ‘the next big thing’ at the position and instead will show five players who I believe are interesting enough to merit watching going into next season and beyond.

All of our selections, however, are exceptionally talented. 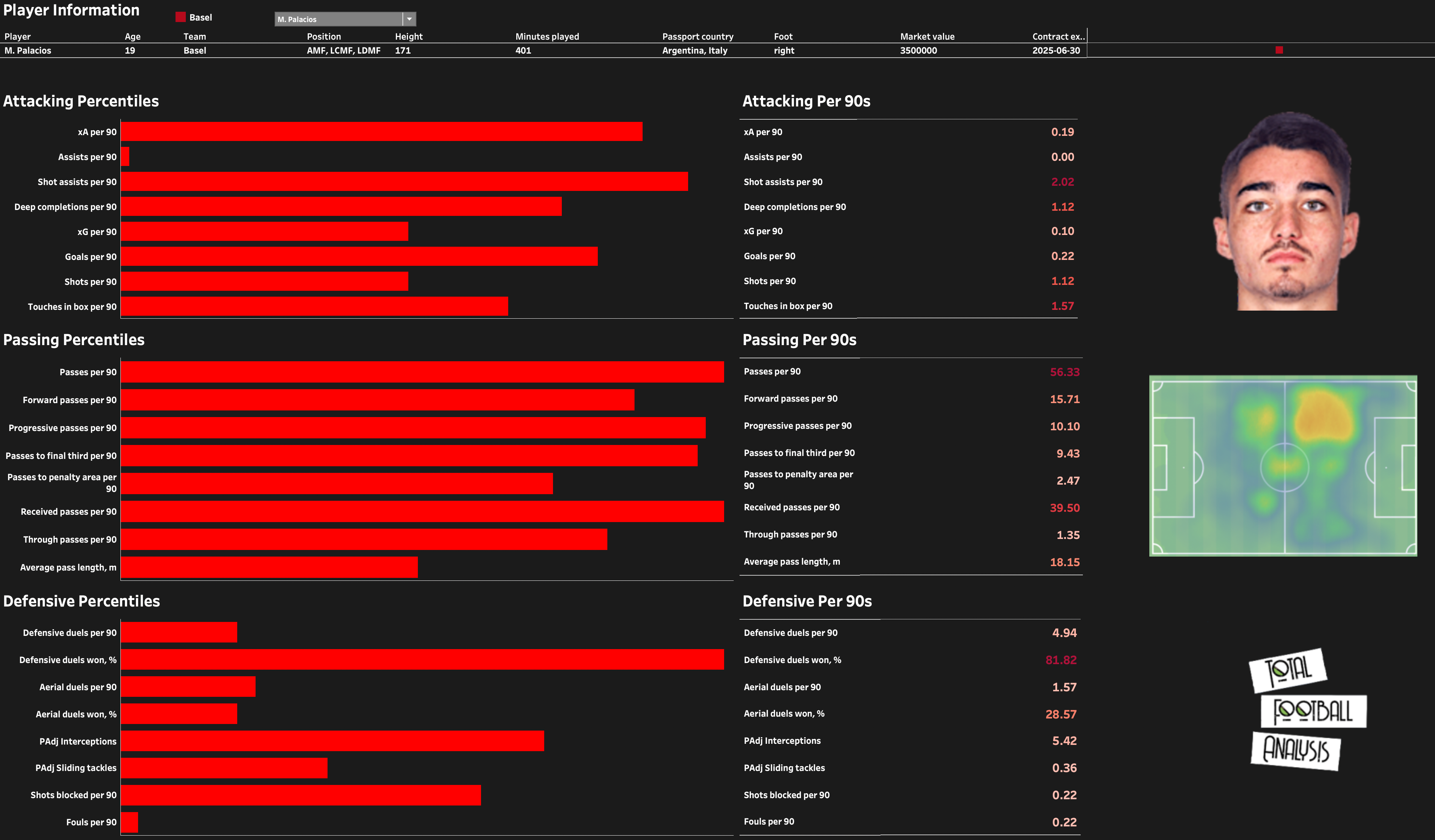 The first player on our list is the 19-year-old Argentinian midfielder Matías Palacios of Basel in Switzerland. He has only been playing in Europe for a relatively short time having moved to Switzerland in February 2021 for a reported £4.7M. He was initially a product of the youth academy at San Lorenzo. Palacios is listed at 171cm | 5’8” and he is predominantly right-footed. He tends to play on the left-hand side of the midfield unit from where he can play inside and look to penetrate in towards the opposition penalty area.

This season has seen his passing and progression numbers look extremely strong, although Basel are relatively possession dominant in the Swiss league. He is averaging 56.33 passes per 90 but, crucially, he is not passive in his passing style and instead looks for opportunities to shift the ball aggressively into the final third through line-breaking passes. He is averaging 10.10 progressive passes per 90, 9.45 passes to the final third per 90 and 2.47 passes to the penalty area per 90. In short, he is a key player for his side in terms of progressing the ball and creating opportunities in the final third.

Interestingly, we have also seen Palacios carry an attacking threat this season where he is averaging 0.22 goals per 90 from 0.10 xG per 90, as he is taking on average 1.12 shots per 90. His assist numbers are not quite as impressive, as he is yet to register an assist in the league this term although he is averaging 0.19 expected assists per 90 which suggests that the assists will come.

Palacios is an interesting player who actually also has an Italian passport. His metrics, as they are just now, are likely to trigger significant interest in securing his signature over the next 12-18 months. This is especially the case if he continues to show this level of output over a longer period of time. When his move does come, I would be surprised if he does not move to the Italian Serie A. 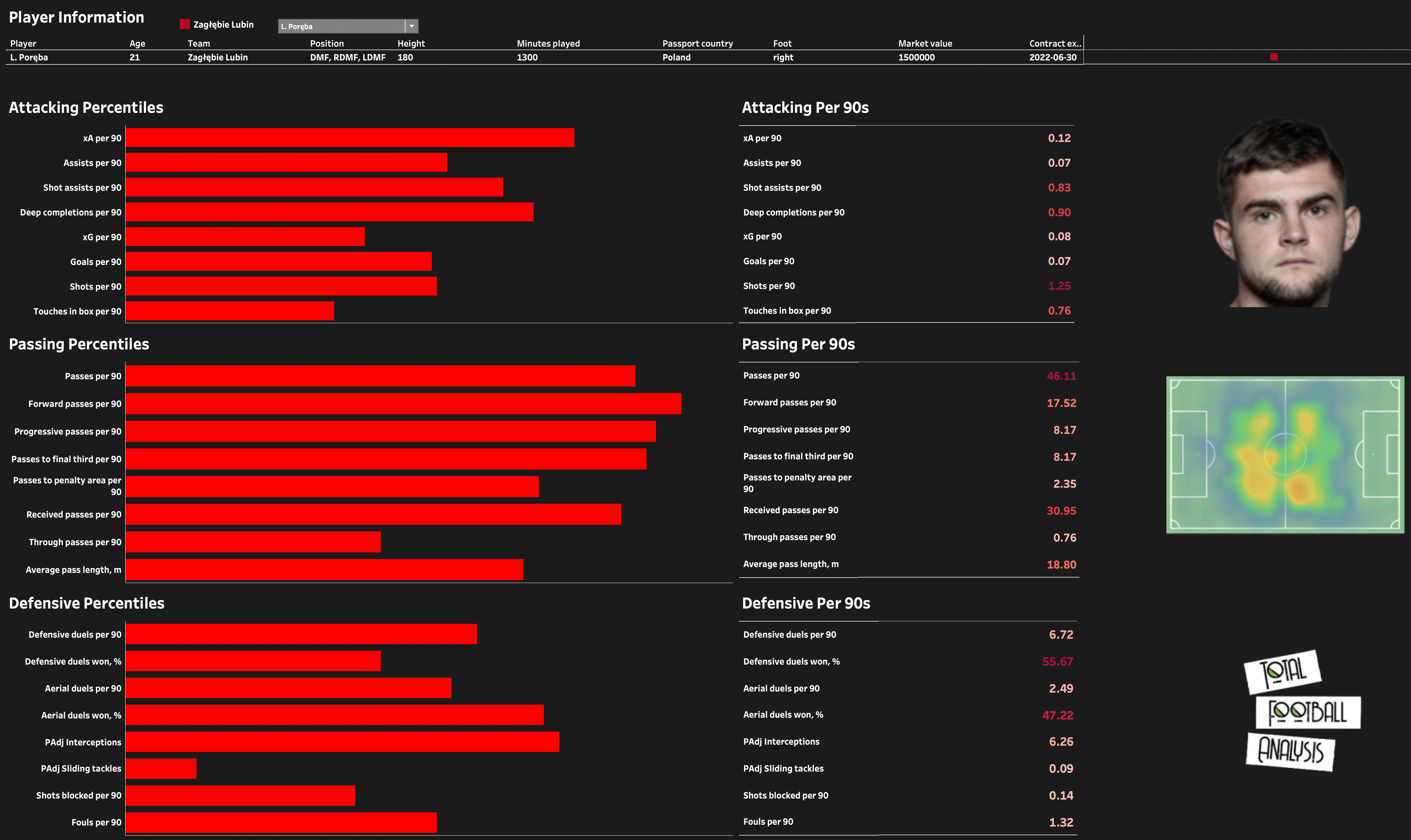 The next player on our list is the 21-year-old Polish central midfielder Łukasz Poręba who is contracted to Zagłębie Lubin in the Polish top-flight. Poręba is a product of the youth system at the club and at this point, he has been capped by the Polish national team at U21 level. Poręba is a box to box midfield type whose output is actually very balanced across all areas of the game. He profiles as a player who could play comfortably as a ‘6’ at the base of the midfield, although I think that he profiles best over the long term as an ‘8’ with freedom to play in all phases.

In possession, Poręba is averaging 46.11 passes per 90 with 8.17 progressive passes and 8.17 passes to the final third per 90. He is also a creative threat with 2.35 passes into the penalty area per 90. Poręba’s defensive outputs are also very strong with 6.72 defensive duels per 90 with a success rate of 55.67% and 2.49 aerial duels with a success rate of 47.22%. He is a midfielder who positions himself well to cut passing lanes and occupy spaces and he has 6.26 possession adjusted interceptions per match so far this season.

Poręba looks well set for a move away from Poland this coming summer with clubs in Germany and Holland having already been linked to signing the midfielder. 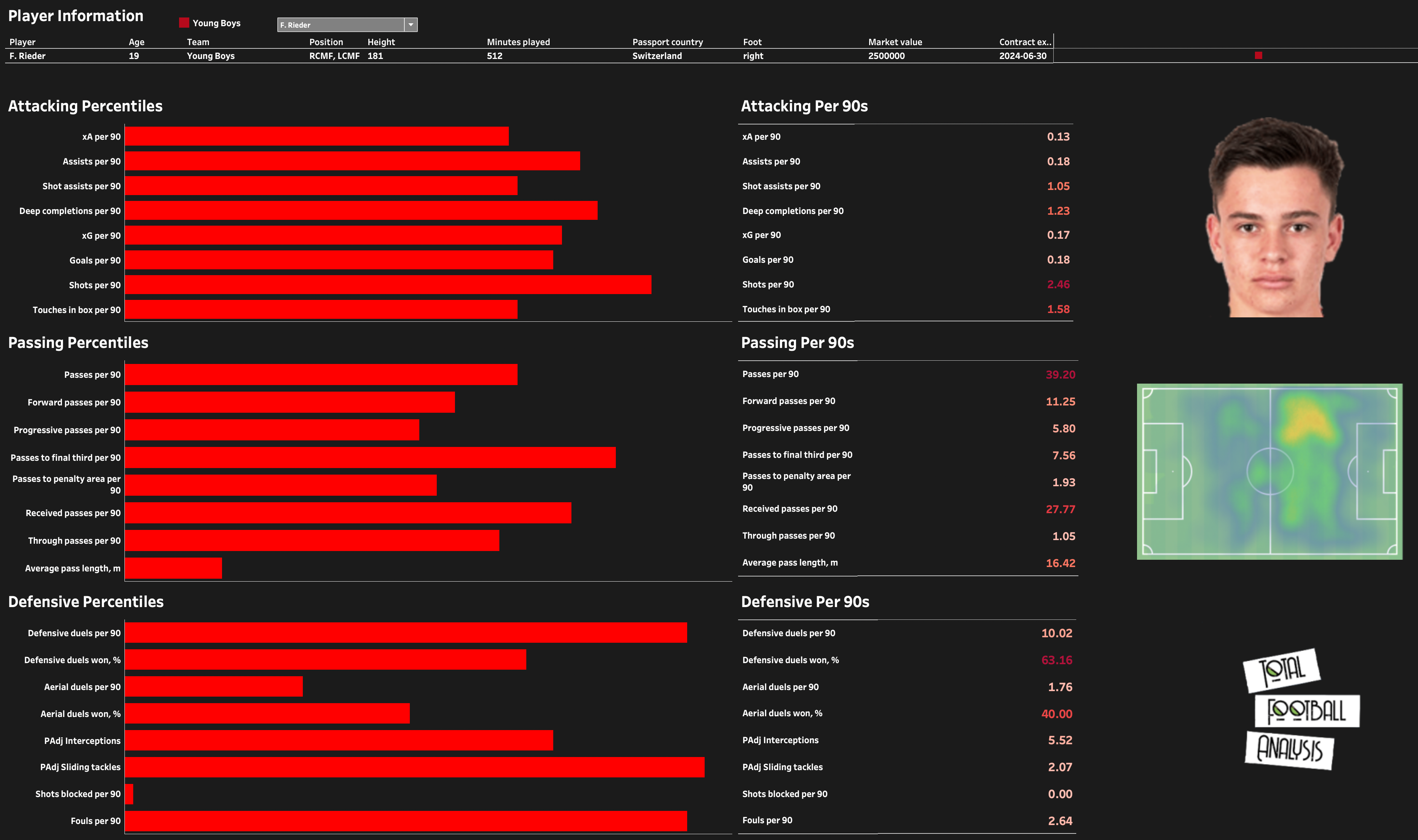 Fabian Rieder is a 19-year-old Swiss midfielder who has been impressive so far this season for Young Boys in the Swiss Super League. He is a product of the youth system at the club and at this stage in his career, he has been capped by Switzerland at U21 level. He is a midfielder who profiles as a box to box midfielder who impresses both in terms of passing and progression and in his attacking outputs.

At this point, it is likely that Rieder will stay in Switzerland for at least one more season beyond this one but then he will have to move in order to reach his potential by playing against a higher level of competition. A move to England or Italy would make sense for this profile of player. 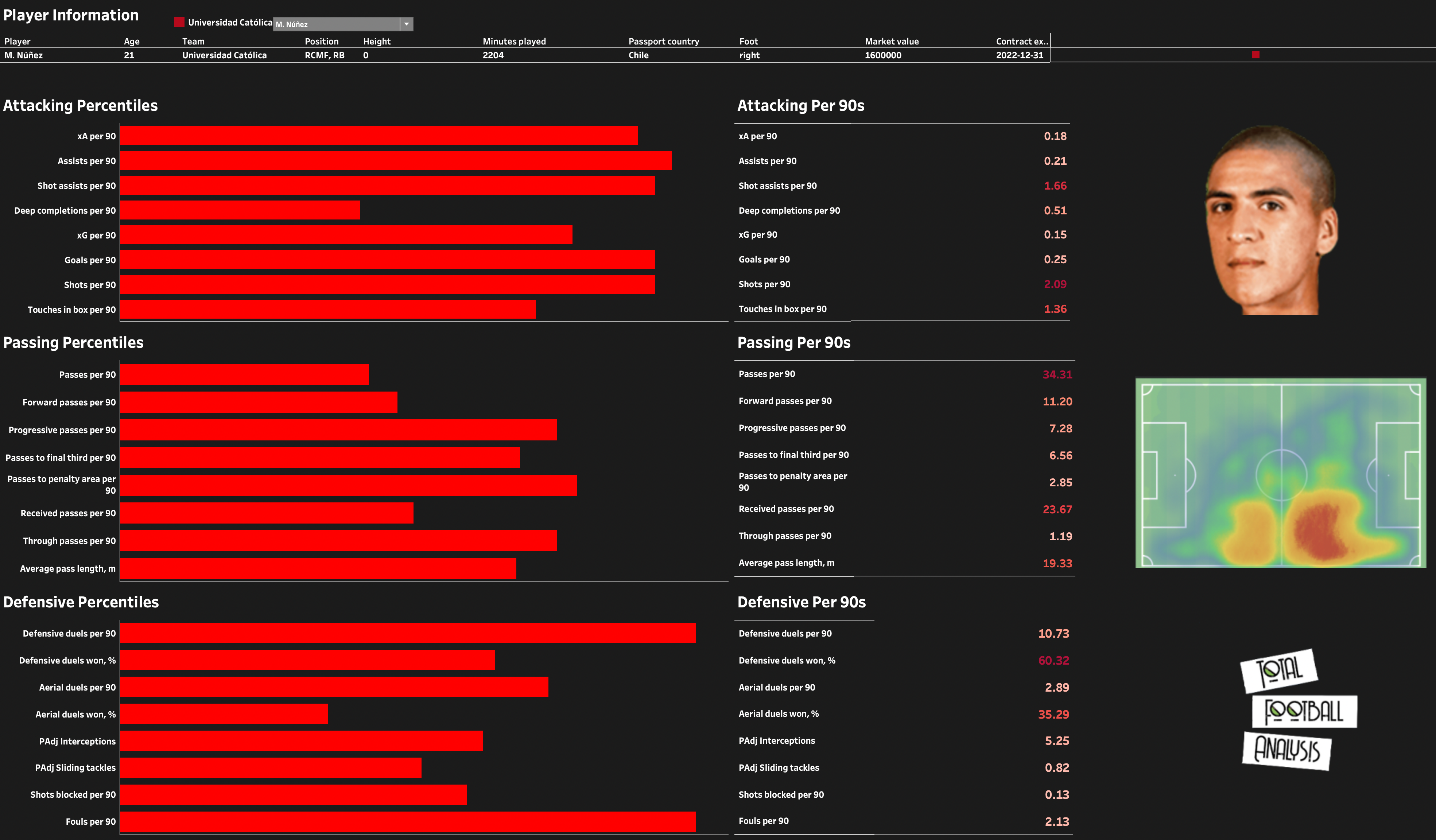 For the next player on our list, we go to South America for the first time with the Chilean international midfielder Marcelino Núñez. The 21-year-old midfielder is currently contracted to Universidad Católica in the Chilean top-flight. He is a product of the youth academy at the club and he has established himself over the last season as a key player for the first-team. Again, he profiles as a player who is more effective as a box to box side with the ability to break forward and affect the game in the final third.

Going forward, it feels as though Núñez would be best suited with a move to Southern Europe with the likes of Italy, Spain or Portugal making sense. 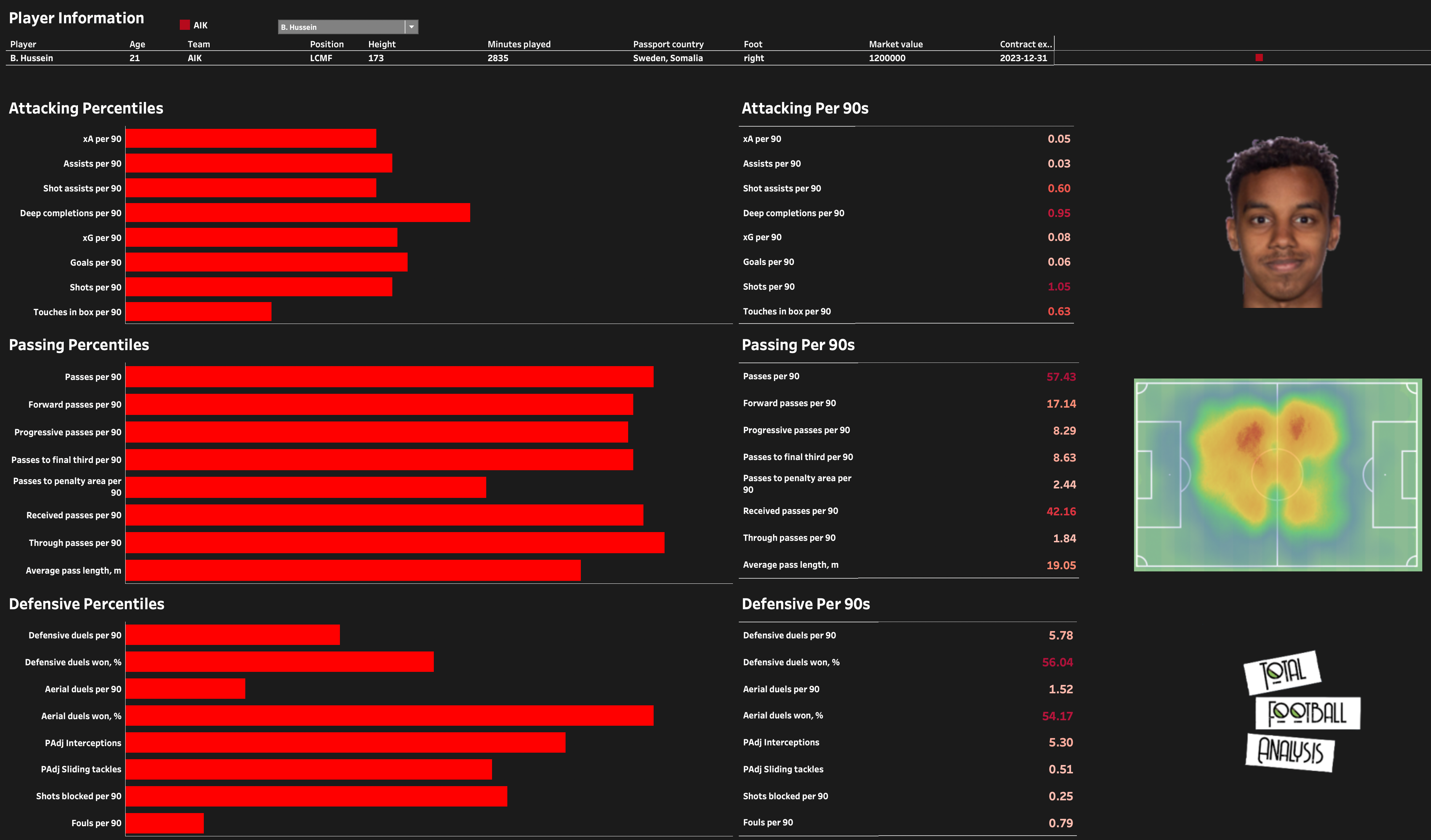 The final player on our list is the 21-year-old Swedish midfielder Bilal Hussein who is currently contracted to AIK in the Swedish Allsvenskan. Hussein is a product of the youth academy at AIK but he has now developed to such a point that he is considered a key player for the club. At this point in his career, Hussein has been capped regularly through the age groups for the Swedish national team and he has been a regular with the U21 setup for some time now. It appears to be a matter of when rather than if he gets a call up to the senior national side.

Hussein is listed at 183cm | 6’1” and he is predominantly right-footed.

Hussein is now in a position where he is likely to be moving on from Sweden to continue his development with a club that plays in a higher level of competition. Hussein is such a versatile player that he would be a good fit for any of the top 5 European leagues. 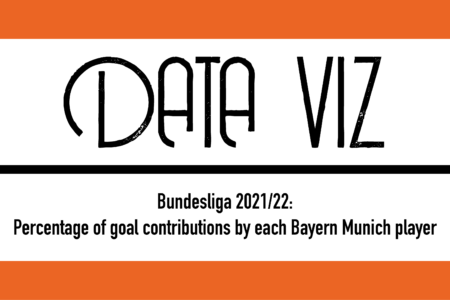