While the top-5 European leagues have been relatively set in stone for some time, although Portugal has this season been challenging France in the co-efficient standings, the next tier down from the top-5 leagues tends to be the most interesting to me from a recruitment perspective. The likes of the Dutch, Belgian, Portuguese leagues along with some others including Austria, Switzerland and Poland and even the likes of Sweden and Norway are all interesting in terms of the quality of their play and a willingness to give regular first-team minutes to younger players.

Indeed, a smart team from those top-5 European leagues will do a lot of their recruitment from the leagues listed and those in the second tier of leagues will recruit from the next tier down, and so on and so on. This hierarchy in terms of recruitment to some extent negates the difficulty of judging a players ability to make the step up to a more competitive league environment. There are of course always examples of players who are able to make the jump from a smaller league to one of the elite competitions in European football but as a general rule, the tier system holds.

For a modern recruitment team best practice now dictates that data is used to cut through the noise of the sheer amount of players who would potentially make realistic targets based on budget and the requirements in terms of player profiles.

While data remains an important part of the recruitment process it should be used carefully and in conjunction with live and video scouting in order to ensure that you have a well rounded and complete recruitment process that helps you to reach the correct decision when signing a player to your club.

In this article, I have used simple data profiling to identify five players who have been impressing so far this season in the Belgian top-flight. 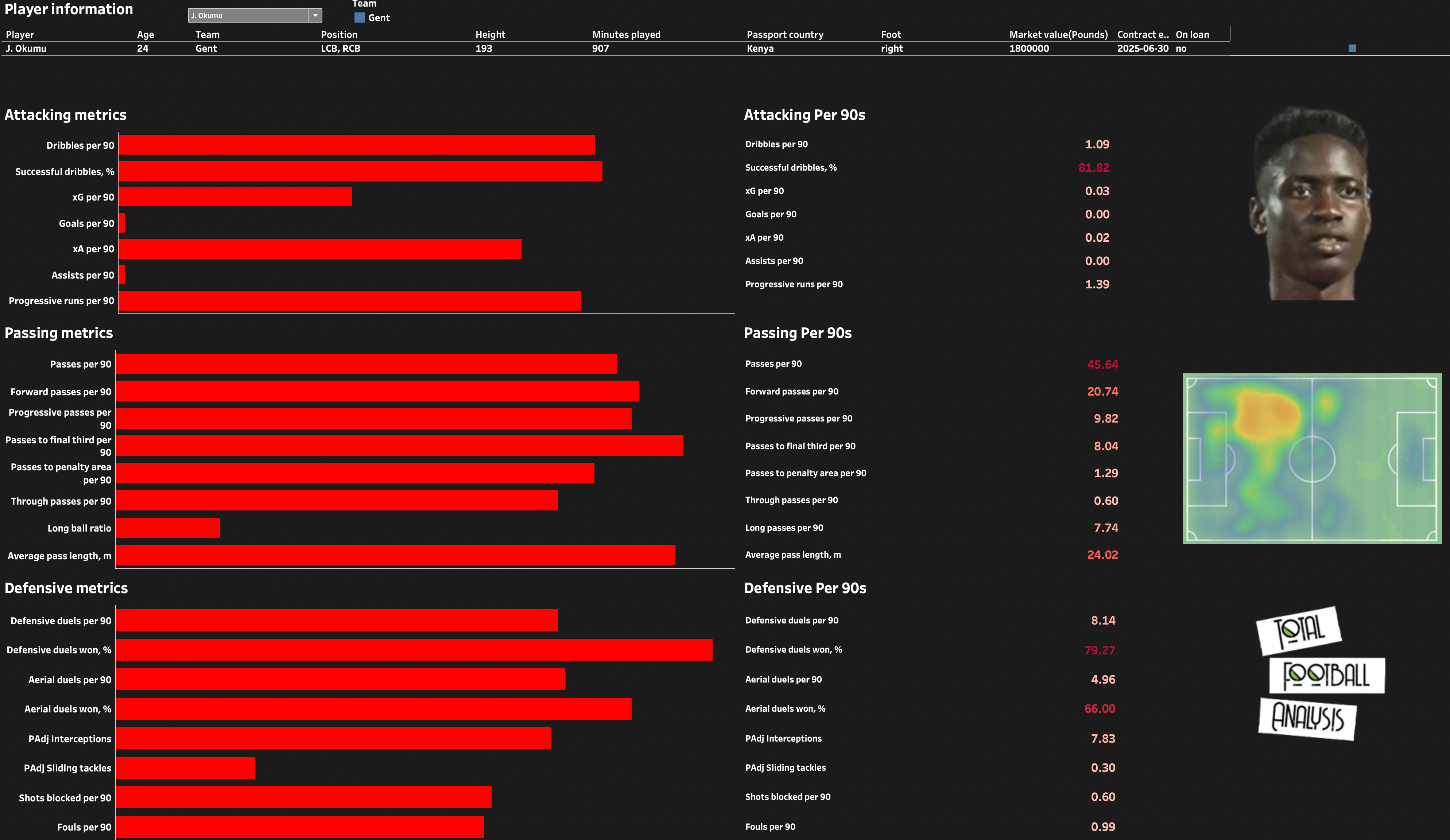 The first player on my shortlist is one who is relatively new to life in Belgium as he only moved to join Gent in July of this year for fee that was reported to be in the region of £3.15M. He was previously on the books of Elfsborg in the Swedish Allsvenskan and his performances were attracting the interest of several clubs around Europe before Gent finally moved to sign the imposing central defender for a fee that I am sure will go on to look like a complete bargain.

Joseph Okumu has had. one of the most unique and interesting career paths in football up until this point with moves that have taken him from his native Kenya to South Africa and then to the lower leagues of the United States before eventually ending up in Europe in Sweden and now Belgium. He is an established international with Kenya and he should go on to be one of their most important players for years to come. Okumu is an imposing central defender listed at 193cm | 6’4″ but his power and pace is only a small part of his game as his game understanding and ability in possession shines whenever he is on the pitch. He is predominantly right-footed but capable of playing as the right-sided or left-sided central defender in most systems.

So far this season he has played 907 minutes in the domestic league and as you can see from his data profile he is well balanced across all key areas. We will start with his defensive outputs as he is averaging 8.14 defensive duels per 90 with a success rate of 79.27% which combined with 4,96 aerial duels per 90 and a success rate of 66% gives him an extremely solid defensive base. Okumu, however, is not a central defender who just has a tendency to sit deep and wait for the ball to come for him. He likes to be aggressive in looking for opportunities to step in front of the ball as his 7.83 possession adjusted interceptions shows us.

In possession, Okumu is extremely strong with the capacity to play line-breaking passes or switch the play through diagonal passes. He is averaging 45.64 passes per 90 with 20.74 per 90 being forward passes. This means that 45.44% of his passes are played forward. He is also averaging 9.82 progressive passes per 90 which translates as 21.5% of his passes being classified as forward passes.

While Okumu is likely to stay in Belgium for this season and maybe next it will not be long before some of European football’s giant clubs are registering an interest in the Kenyan central defender. 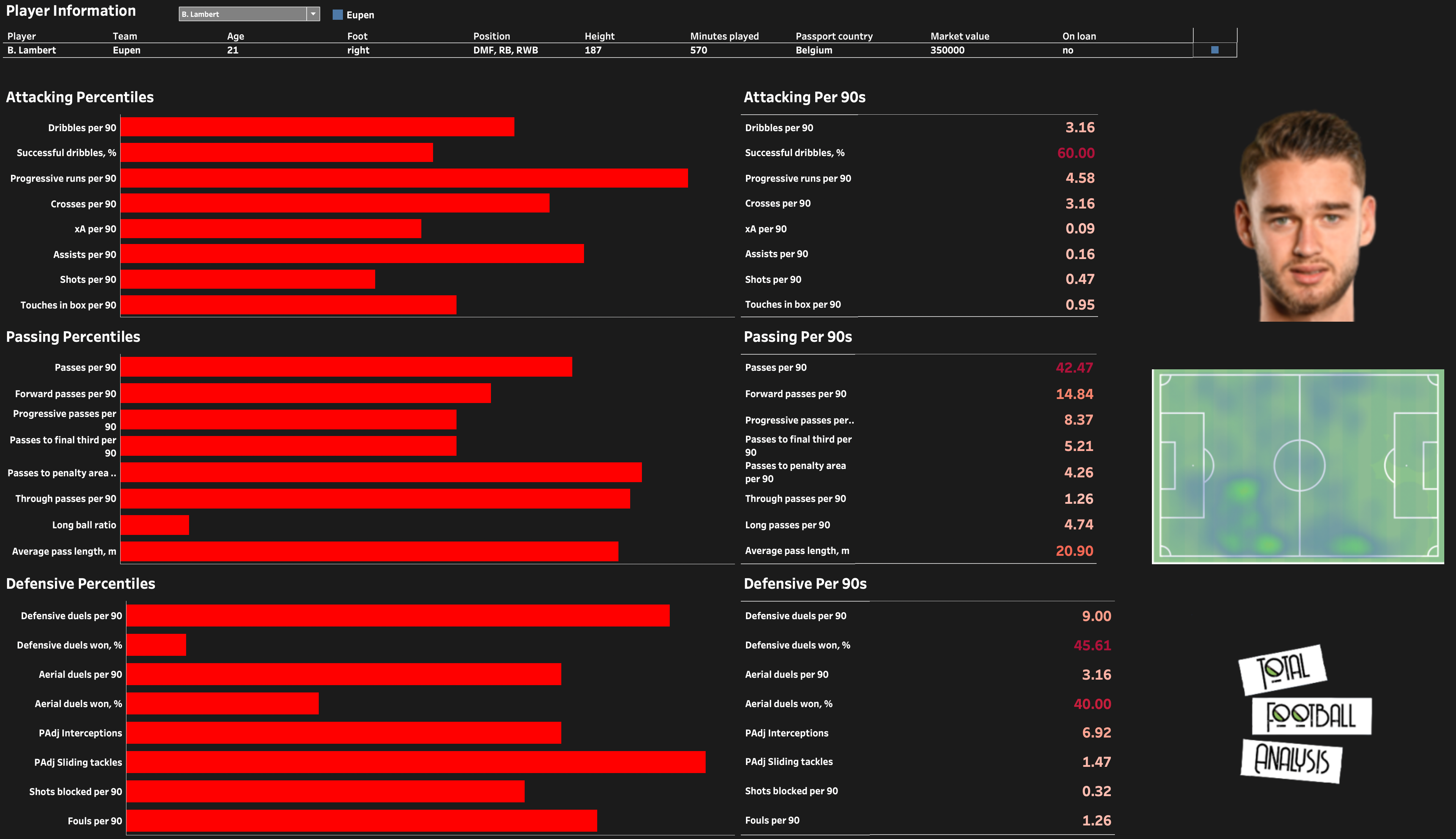 I genuinely cannot remember the last time that I labelled any player as a utility player it feels like a term from a form of football that lies firmly in the past but I felt that it encapsulated the positional versatility of Boris Lambert perfectly. His side Eupen had been performing well above expectations and they actually led the table at one point although at the time of writing they have dropped back down to 8th position. Lambert has been an important part of their positive season so far but he has played right-back, left-back, centre back and in the midfield unit. It is difficult to discern exactly where his best position would be but I believe he would fit well as a wide central defender in a back three system.

Lambert is a product of the youth system at Eupen and he has not made any appearances for Belgium at international youth level. He is listed at 187cm | 6’2″ and he is predominantly right-footed.

Lambert is another player who is a good example of a well-balanced player across all of the key areas from a data perspective. He is averaging 9 defensive duels per 90 although his success rate of 45.61% is relatively low compared to other players in the league who have played at fullback this season. He is also averaging 3.16 aerial duels per 90 with a success rate of 40% and he has 6.92  possession adjusted interceptions. In possession he progresses the ball well for his team with an average of 42.47 passes per 90 and 8.37 progressive passes per 90 this means that 19.8% of his total passes are listed as progressive.

Lambert is a player who profiles as someone who is more likely to make a move within Belgium to a bigger side than Eupen as opposed to being someone who will move away from Belgium. 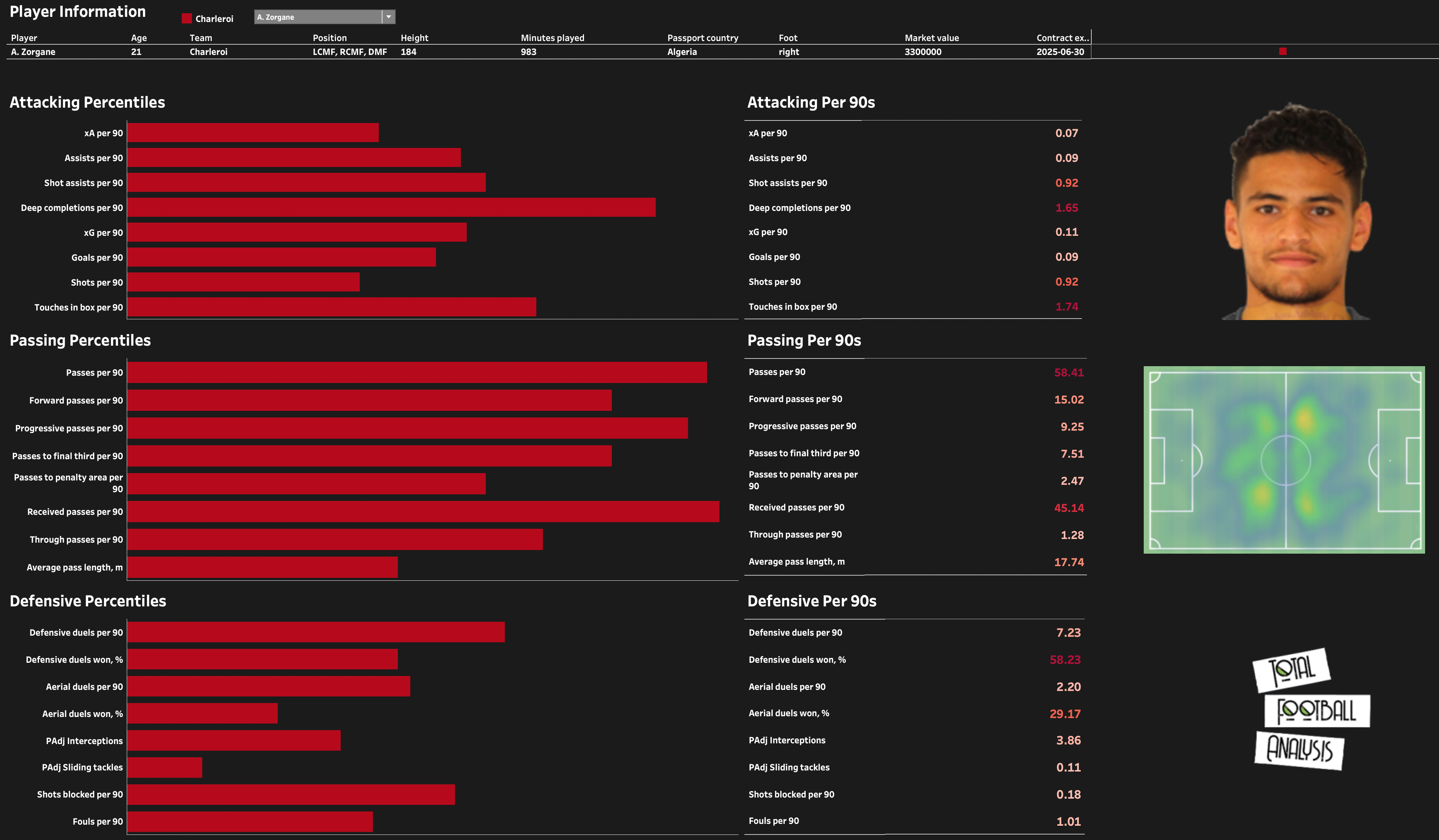 Adem Zorgane is a 21-year-old Algerian midfielder who moved to the Belgian Pro League in July of this year when he left Paradou AC in his native Algeria for a fee reported to be in the region of 1.8M. A high fee for a side in the Algerian league to receive but one that I believe will prove to be a complete bargain when all is said and done. Zorgane has recently won his first full cap for the Algerian national team and he should go on to become an important player for them in the years to come. The young midfielder was initially in the youth system at ES Setif but he never made an appearance for them at first-team level before moving on to play for Paradou AC, He is a midfielder who could fill different roles with his ability to play either as a ‘6’ or as an ‘8’.

Zorgane is listed at 184cm | 6’1″ and he is predominantly right-footed although he is also capable on his left.

I believe that Charleroi will be unable to hold on to Zorgane in the long term as he profiles as a central midfielder who would fit the English Premier League or German Bundesliga very well. 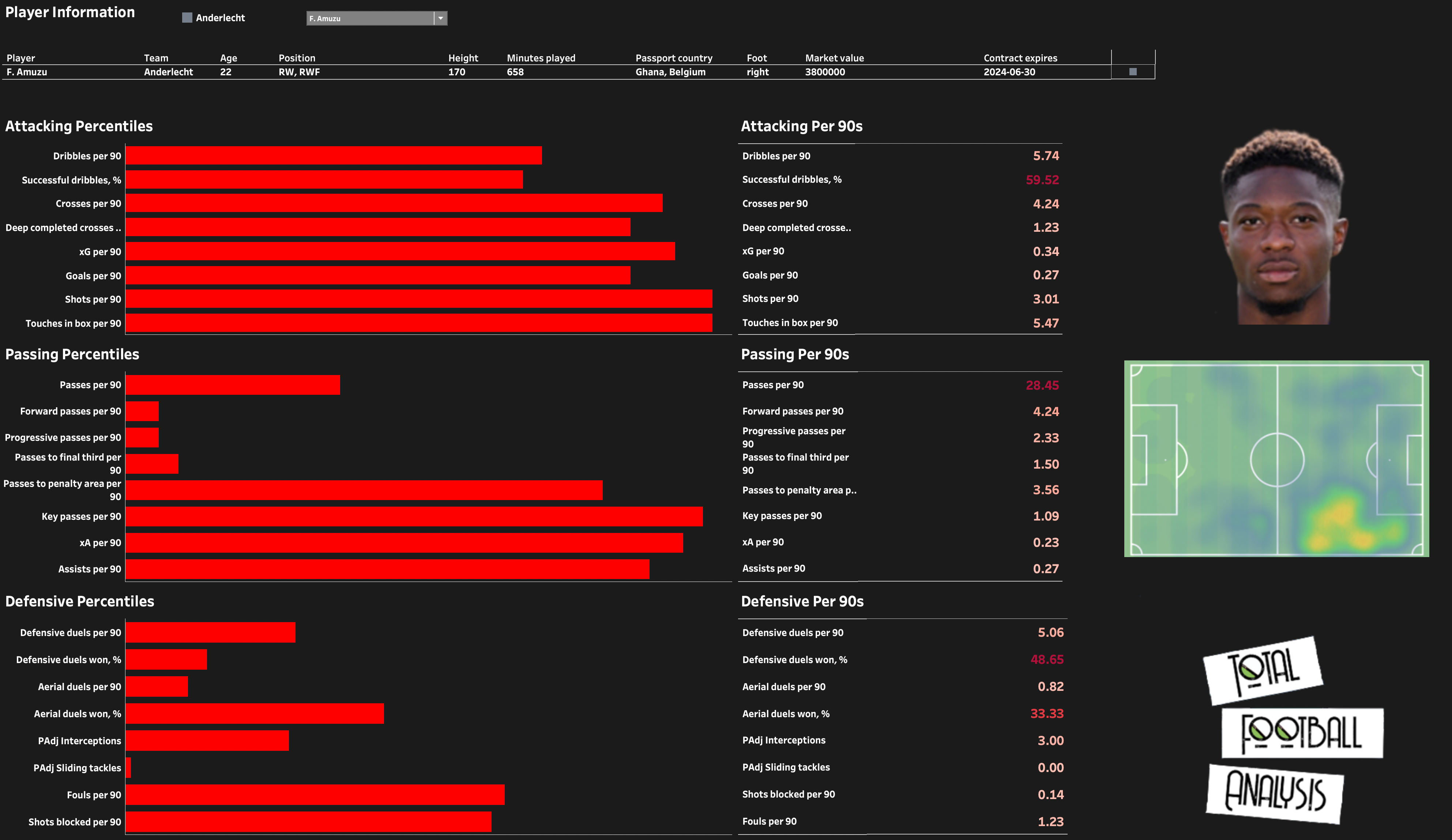 Francis Amuzu is a 22-year-old Ghanian born winger who has made the choice, at the moment, to represent Belgium at international level. Amuzu made the move to join Anderlecht from the lower division Belgian side JMG Lier in 2015 and he has been highly rated by those at the Brussels club ever since. While Anderlecht have been performing below their lofty expectation for some time now Amuzu is one of a group of young players who is making fans of the club hope that success is just around the corner.

The young winger is listed at 170cm | 5’7″ and he is predominantly right-footed. He is capable of playing from the right or from the left and in either position his balance and agility means that he can attack on the inside or outside of any opposition defender.

I believe that Amuzu will be on the shopping lists of teams in Germany and Italy in the next 12 to 18 months. 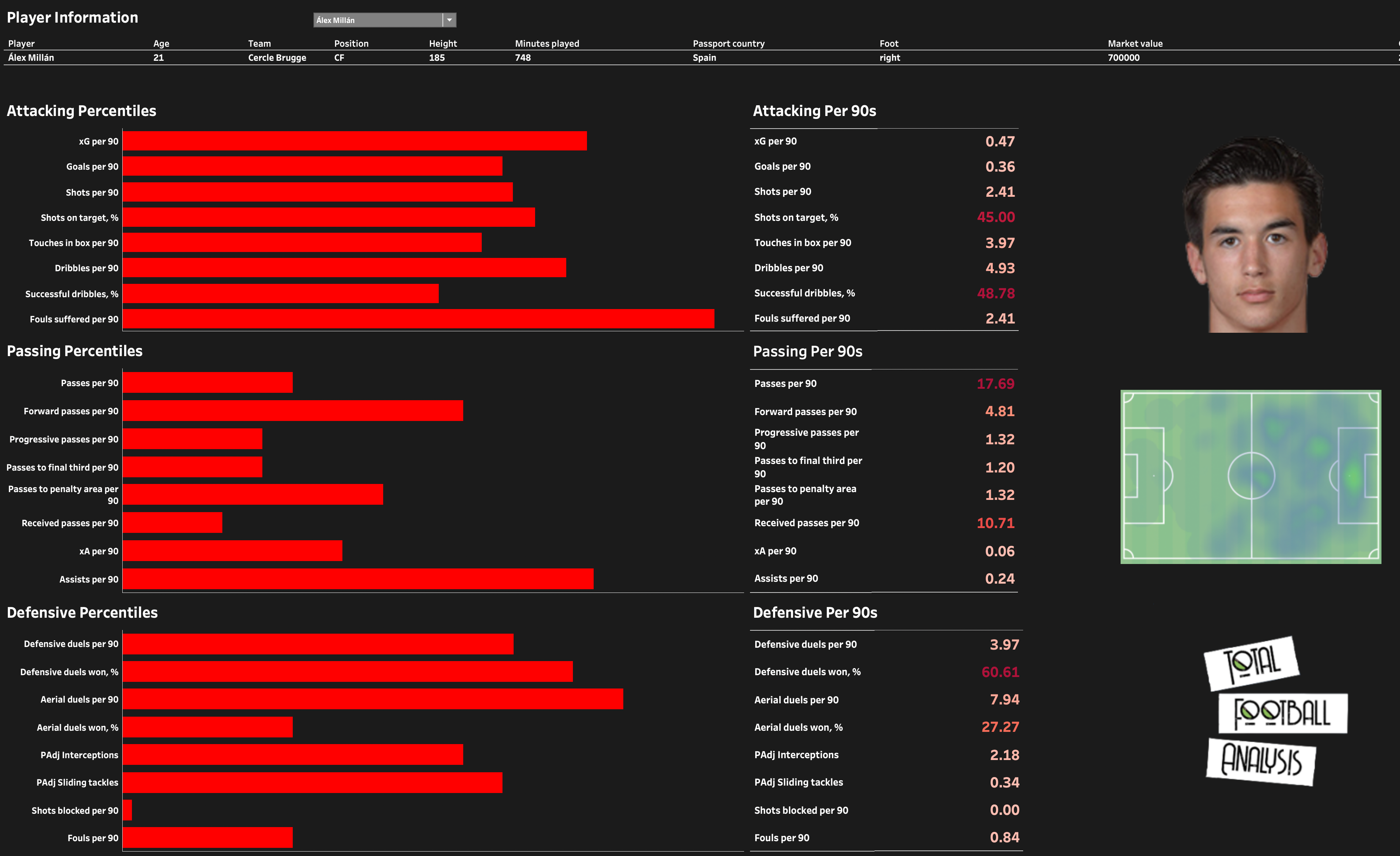 The final player on our list is the 21-year-old Spanish centre forward Alex Millan who is currently on loan in Belgium with Cercle Brugge from Villarreal in La Liga. Millan was initially a part of the youth setup at Real Zaragoza before moving to Villarreal at a young age. He moved this past summer to join Cercle Brugge, who have a partnership with AS Monaco and his performances have been excellent. Transfermarkt states that the Belgian side have an option to buy Millan at the end of the loan spell but the potential fee is not listed.

Millan is listed at 183cm | 6’1″ and he is predominantly right-footed.

If Millan does have a buy clause in the loan deal then I would not be surprised to see Cercle Brugge trigger that option before the player moves to AS Monaco.

The Belgian Pro League remains an excellent market for recruitment with the sheer number of young players who are given exposure early to first-team football. Increasingly, we are seeing variation in terms of styles of play within the league and that is simply increasing the readiness of these young players to move to more competitive leagues when their time comes.