Victor Osimhen scout report: How the Nigerian forward is firing Napoli to the top of the table

Victor Osimhen is a 22-year-old centre-forward currently playing for Napoli in Serie A. He joined Napoli from Lille in Ligue 1 last summer, and in his first season, he notched 10 goals and made three assists in all competitions. This return was slightly underwhelming given his €71.25m fee that Napoli forked out for his services. However, this year he has hit the ground running and despite not creating a goal for his teammates as of yet he has scored nine goals already this season. Osimhen has been outstanding as Napoli have raced to the top of the table, sitting above AC Milan on goal difference, only dropping two league points thus far, with 31 points from their first 11 games. This tactical analysis and scout report will highlight Osimhen’s key attributes giving an analysis of the tactics he has used thus far this season to be as effective as he has been.

Osimhen stands at 1.86m in height and has a noticeably strong frame. He is athletic and has an impressive spring in his leap when competing aerially. He is physical with the opponent when involved in an aerial duel, and his 45.5% win rate for aerial duels is impressive.
Firstly, he uses this to his advantage when acting as a target man. Osimhen can bring the ball down but can knock the ball on for runners either side of him. 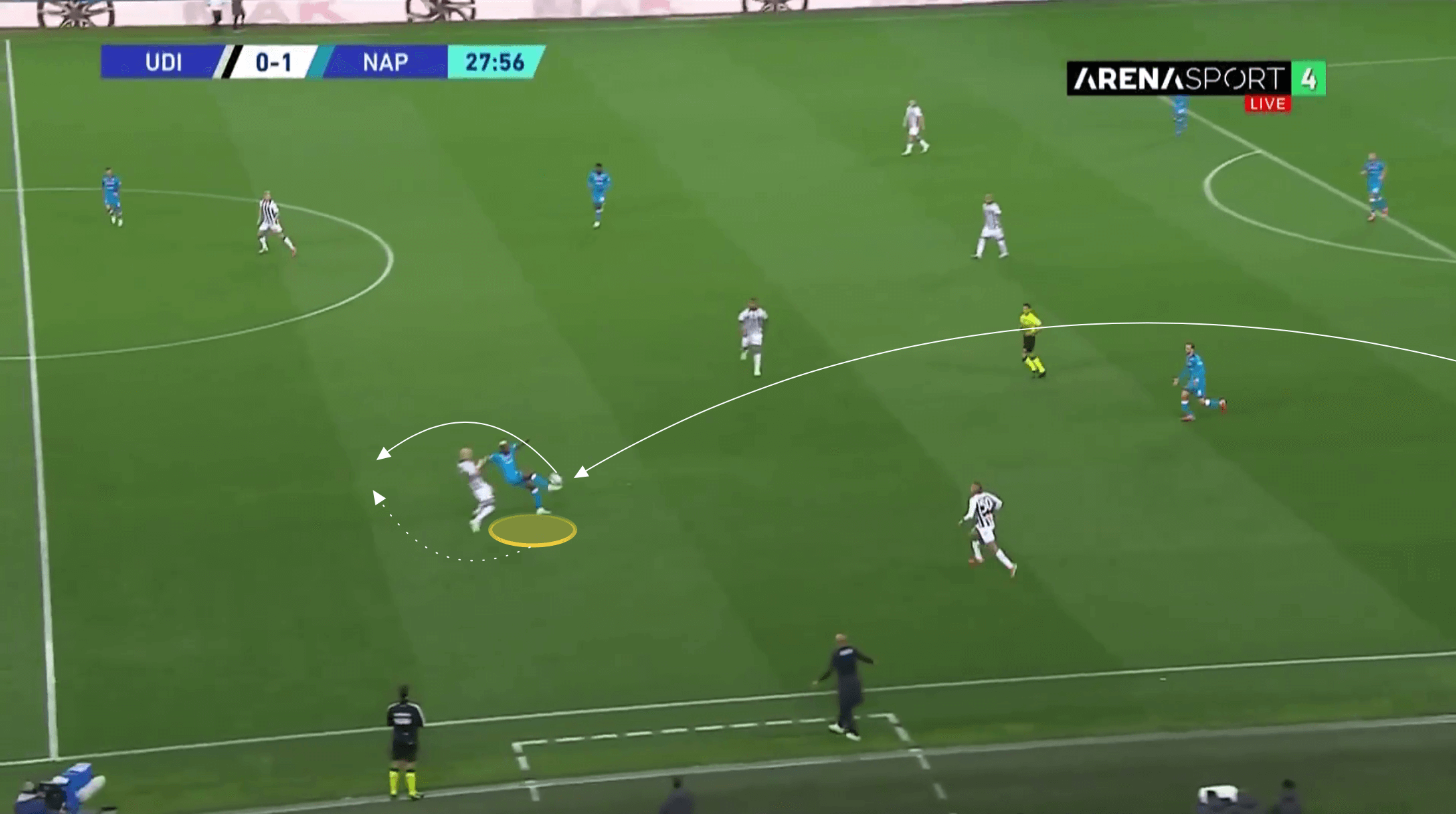 Osimhen is an aerial threat closer to goal, having scored twice this season from headers already. One of the most noticeable aspects of his performance aerially is his timing and “hang time” on what is an already strong leap. For his goal against Torino earlier this season he was able to get far above the opposition defenders before heading home powerfully. He often leans in to the defender as he jumps using them to stay in the air that fraction longer, whilst also preventing them from being able to get up and compete for the header themselves. 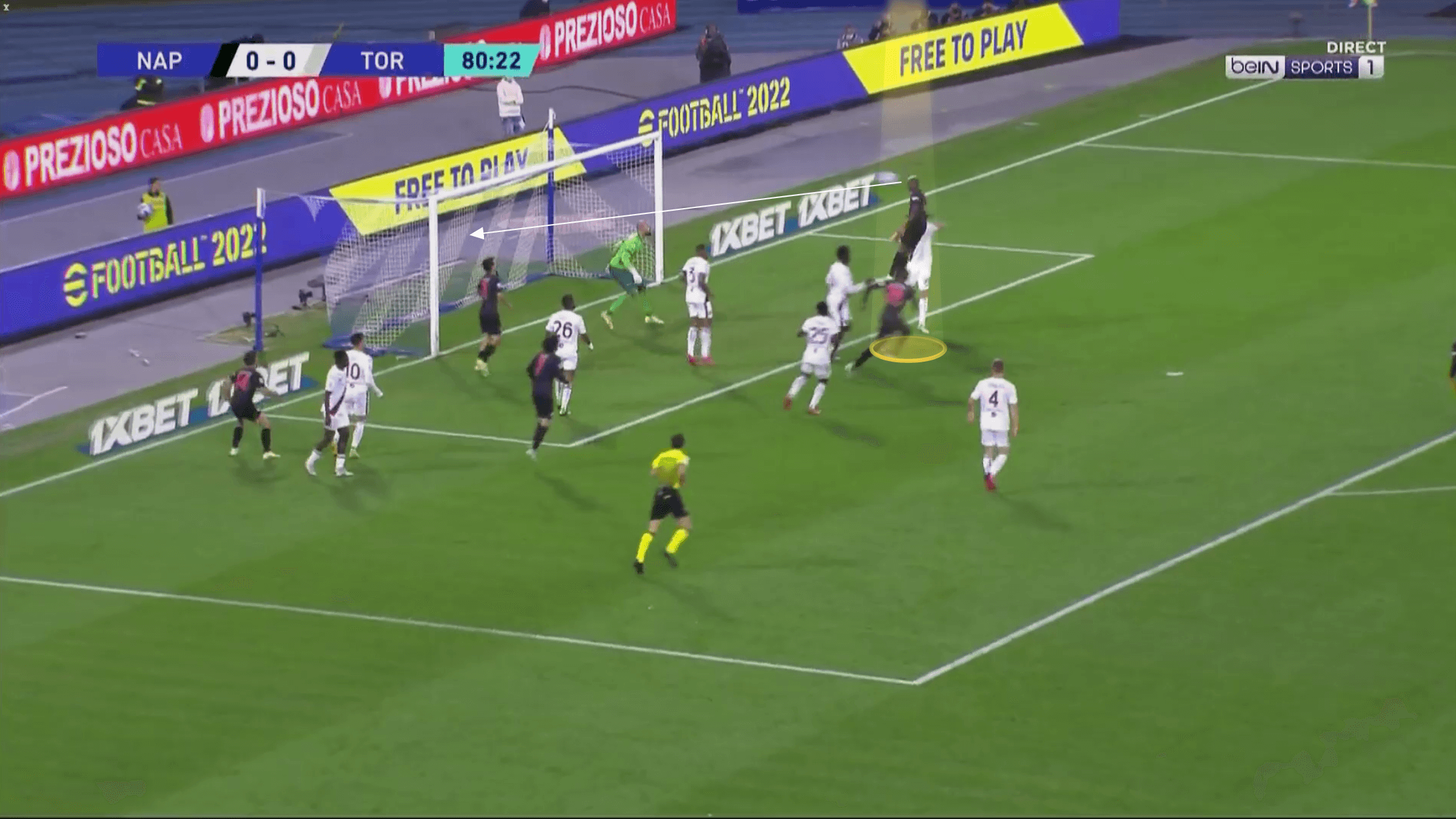 He shows his athletic prowess when competing aerially in the box too. This can show itself with a header like in the previous image or with a first time touch around an opponent (his first goal against Leicester City in the Europa League was a prime example of this), or with an acrobatic attempt such as in the following image. Osimhen’s ability to even attempt the bicycle let alone time it and direct it towards goal with power when the ball was played at a flat angle towards him, shows technical ability and an incredibly high level of athleticism. 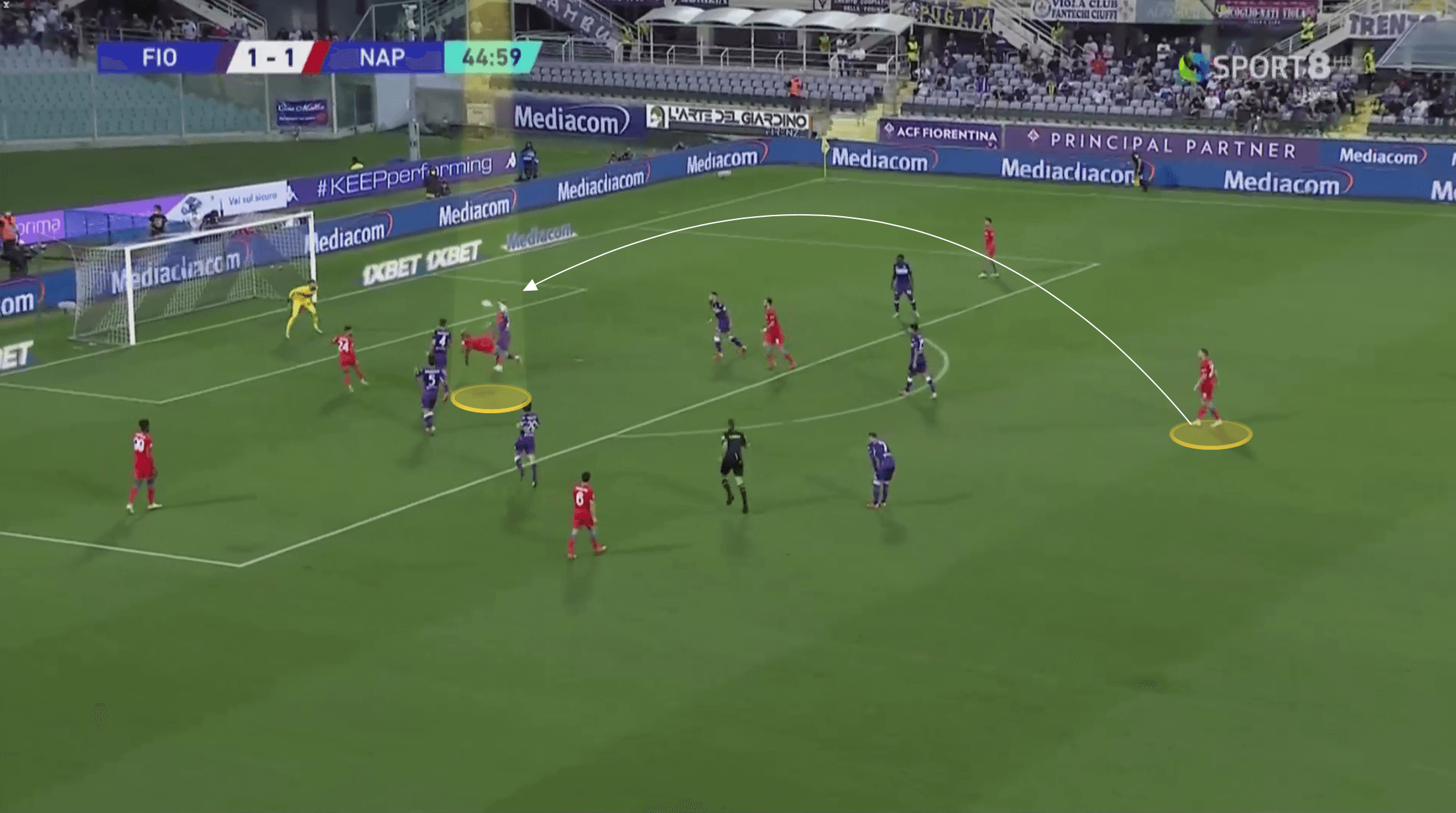 Osimhen’s role in build-up play is generally restricted to working as a target, where he can win aerial duels or play first time passes. The bulk of Osimhen’s work comes closer to the area, which we can see in his heat map below, which shows an astonishingly high level of action in and around the area, with little action inside his own half. 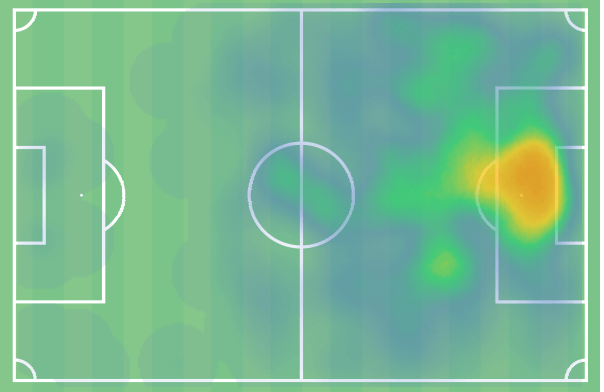 Osimhen continues to play regularly off of his first touch in attacking situations too, and his movement and first time finishing is a frequent source of goals for him.

He looks to latch onto crosses or through passes without having to delay his run. As a result, he may seek to initially delay the run, leaving it until the last possible moment to direct his run into the open space. The wingers either side of him are aware of this and know the areas Osimhen likes to receive the ball, expecting their forward to hit the open space.

He varies his run, generally adjusting the direction of the run based on the readiness of his winger to cross.
In the image below he recognises there is plenty of open space and he still has distance to cover in order to get on the end of the cross. As a result, he opts to merely sprint forward, keeping his run simple and trusting his ability to beat the marker for pace. 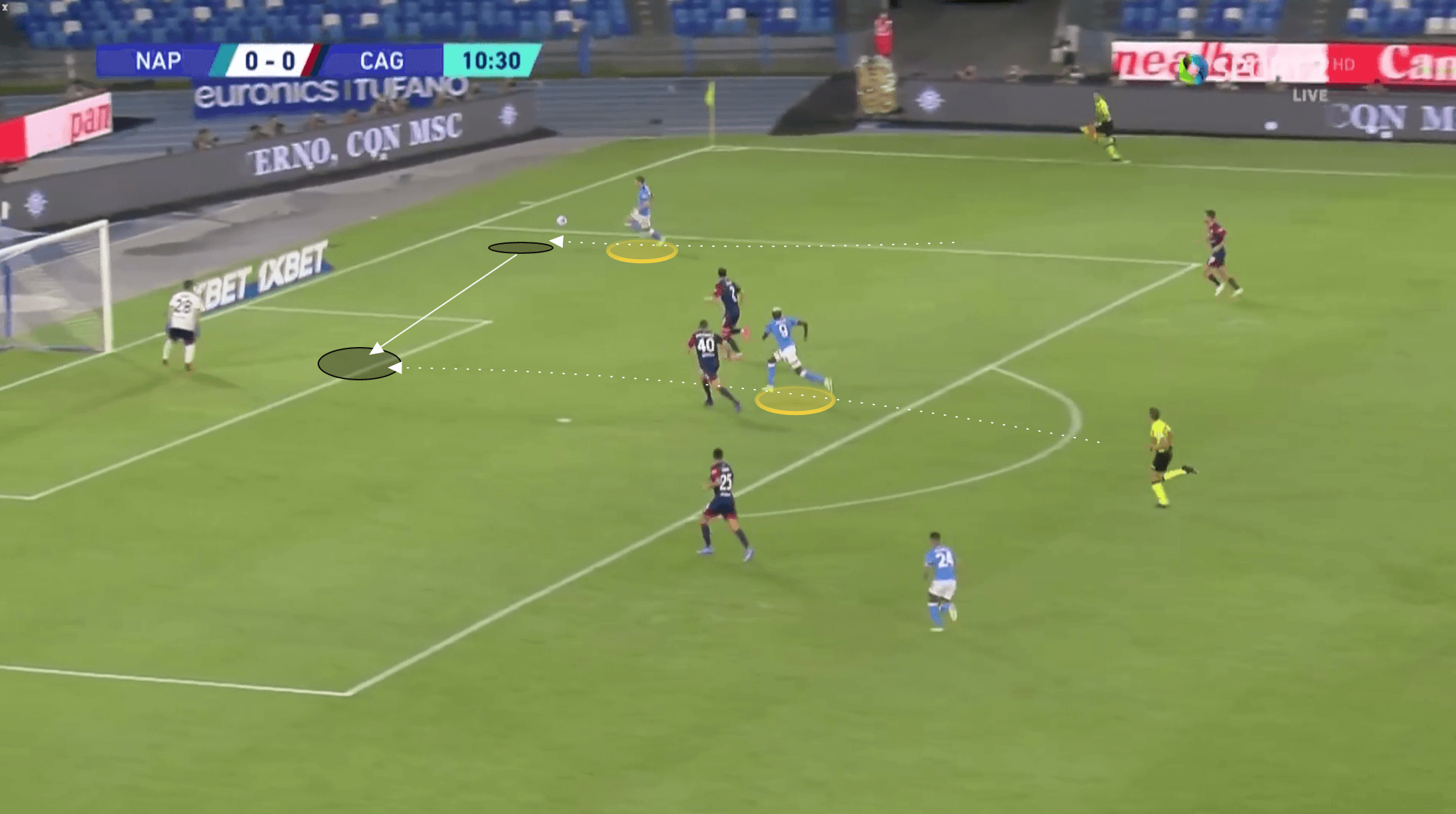 However, in the image below he is positioned closer to goal as the cross is about to be made and there is clearly less space to attack. Nevertheless, he looks to attack the space just vacated by his teammate, with this player dragging his marker towards goal with him. Osimhen capitalises on this and scores from close range. 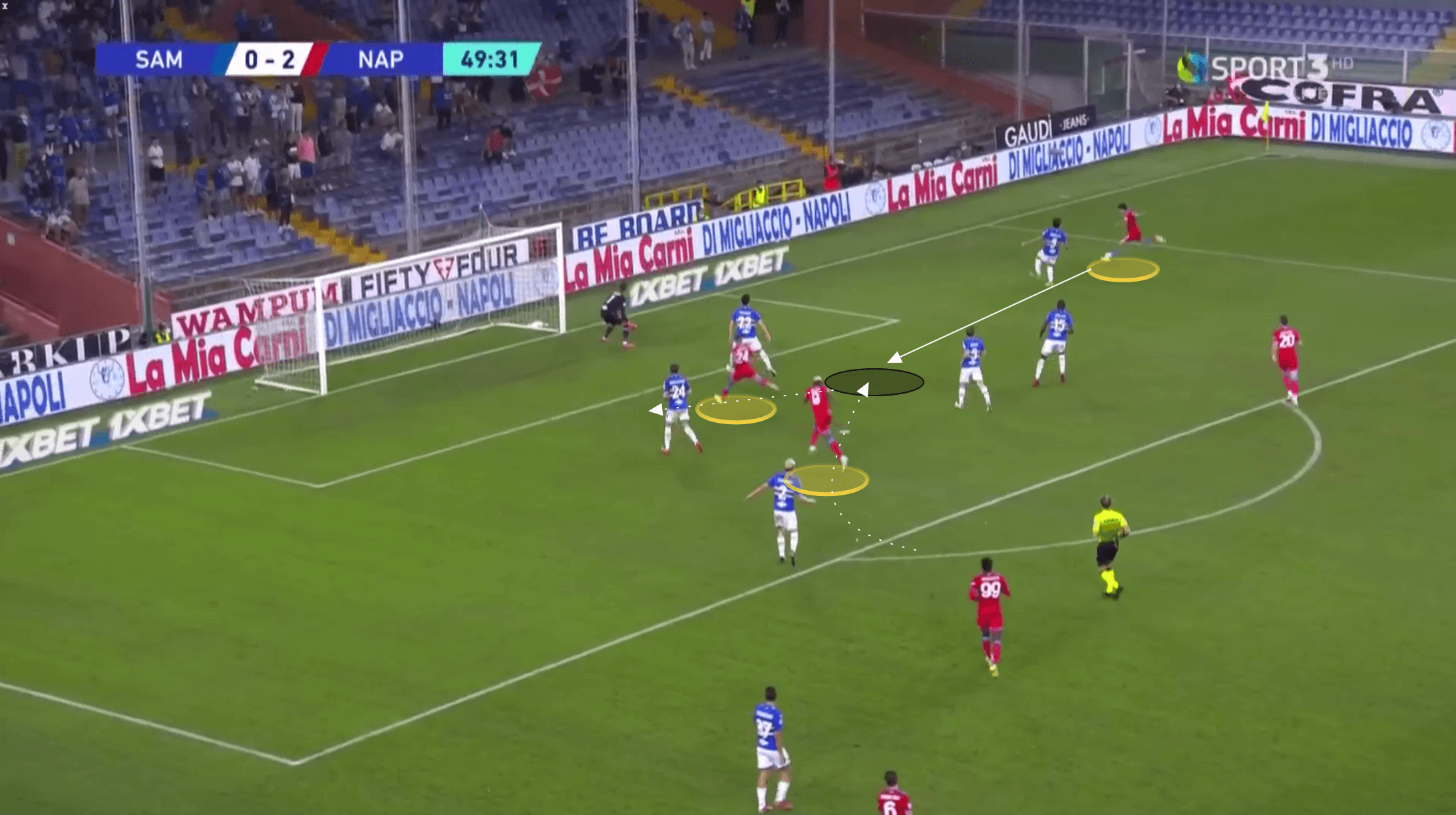 The final image shows his finish against Sampdoria. Here Osimhen shows his ability to create space for himself. The forward initially drives inside towards the centre of the goal, bringing his marker with him. As the cross is made he darts towards the back post into the space he has created for himself. 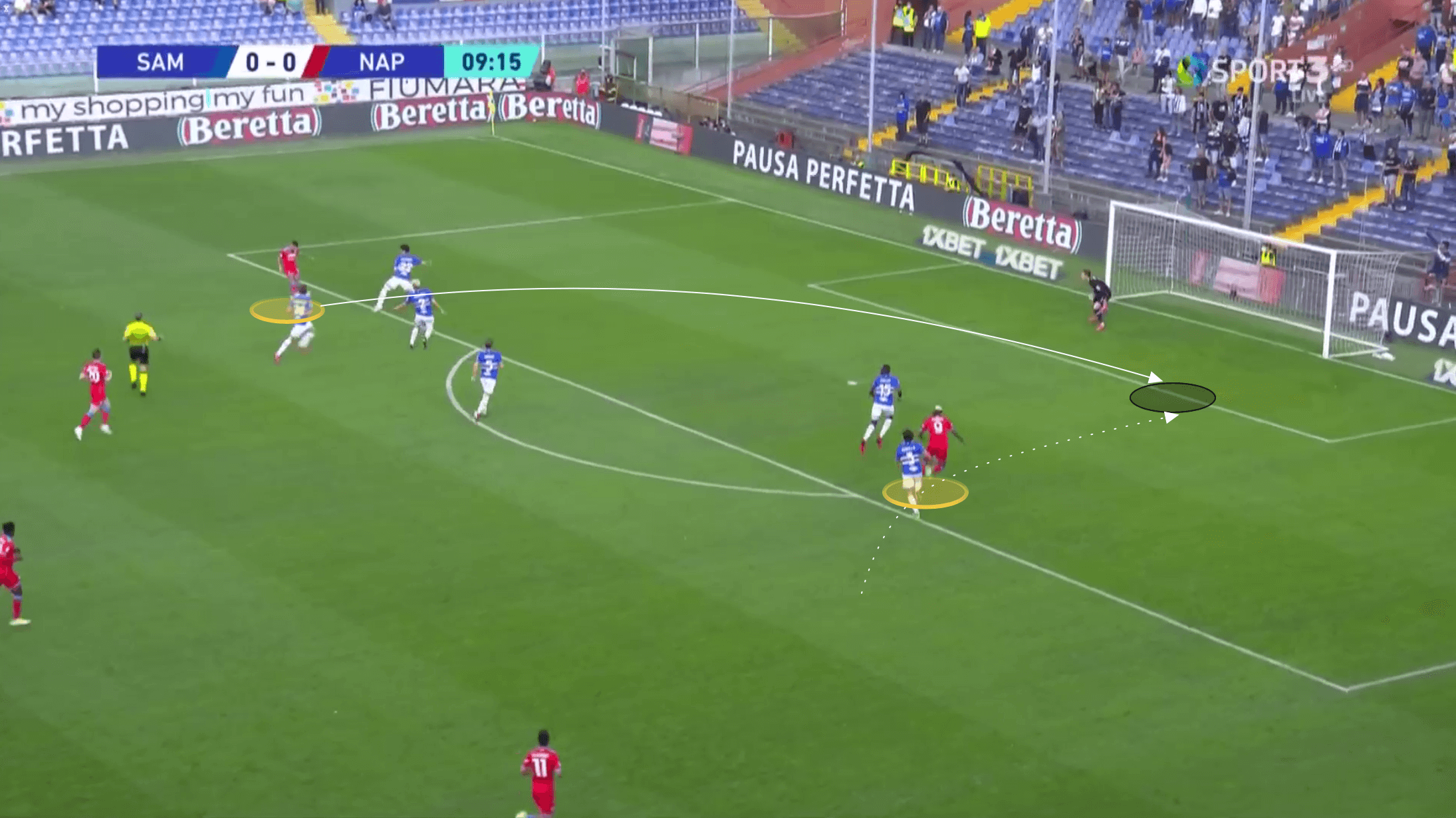 His movement is key to his goalscoring, allowing him to consistently get shots away from close distances. We can see this from looking at his shot map from this season where his goals have predominantly come from the six-yard box. 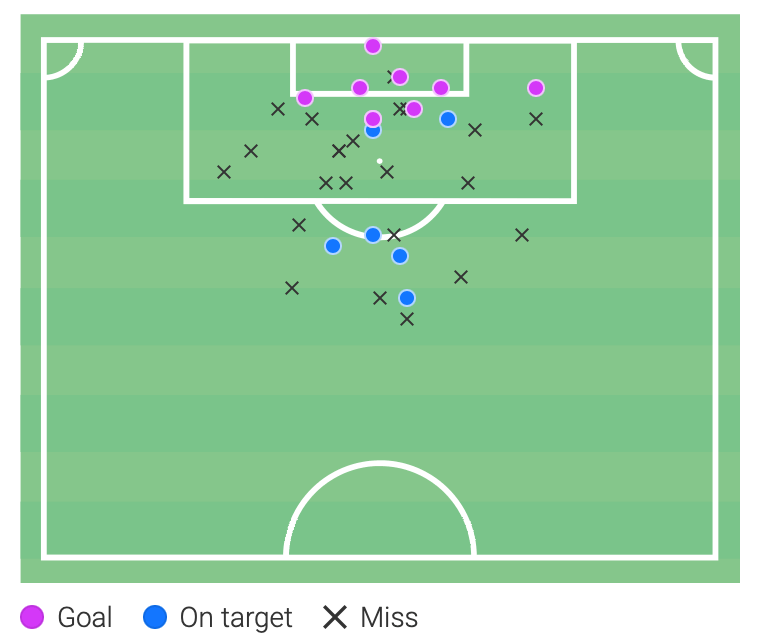 Osimhen’s athleticism is noticeable when out of possession as well. Napoli operate with an intense press on occasion as reflected by their 10.68 PPDA this season, whilst the 6.1 duels, tackles and interceptions per minute of opposition possession gives them the fifth-highest challenge intensity in the league.

Osimhen has an impressive acceleration over short distances and as a result he closes the space between himself and the ball-carrier when pressing very quickly. He doesn’t overrun his press, decelerating efficiently too. Osimhen is able to change direction at pace and continue to press the opposition backline. All of these facts of his pressing game when put together make Osimhen a highly effective presser who can lead the line and consistently be a thorn in the opposition’s side as they seek to build out from the back.

Against Venezia, he showed two variations of his ability to press from an identical situation within minutes of one another.

In the below image Osimhen presses the backwards pass to the centre-back, decelerating, keeping a distance from the ball-carrier where he can’t be bypassed by a dribble. Following this, he presses the pass to the goalkeeper. 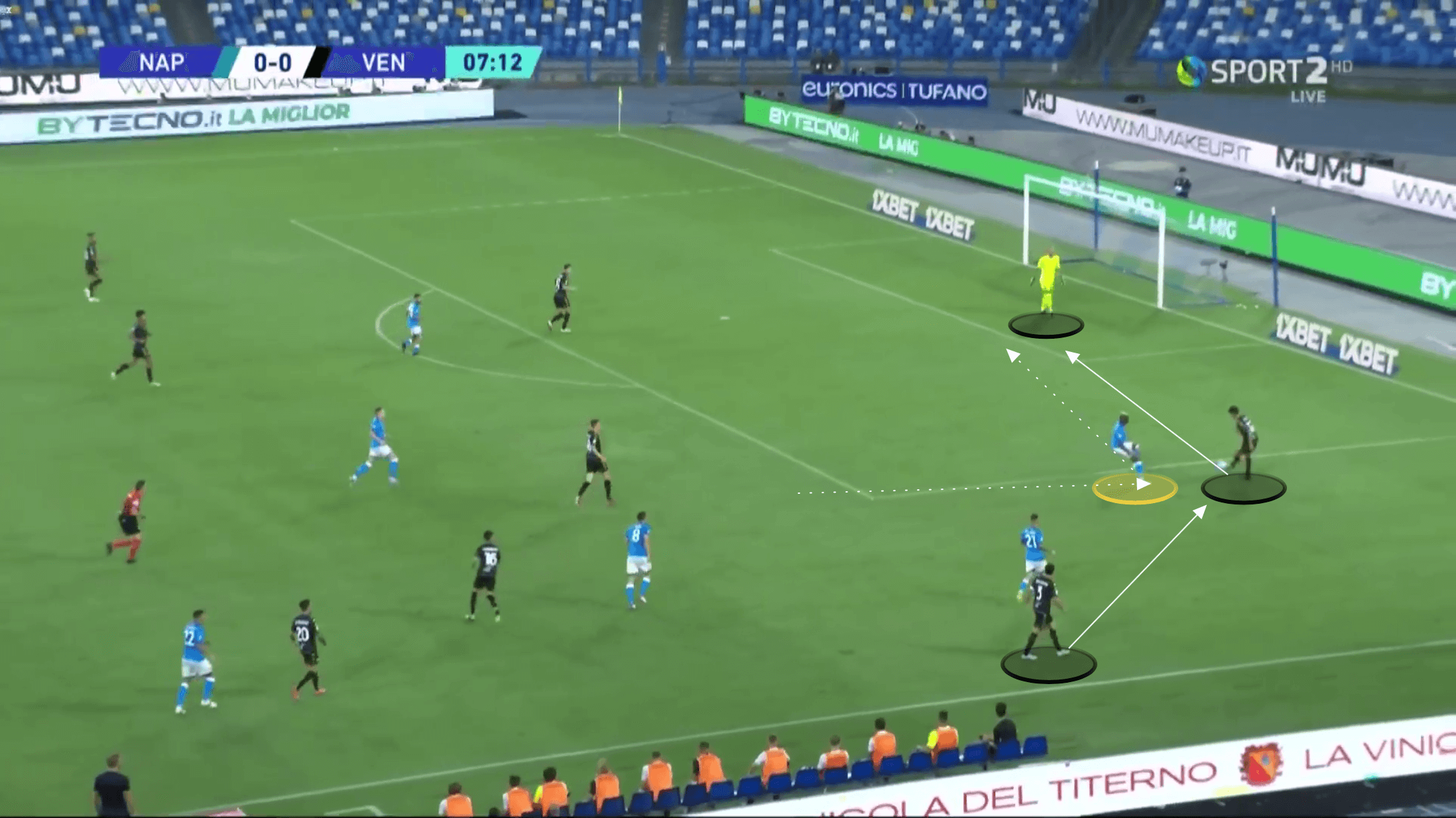 He shows outstanding acceleration and mobility to get across and block the clearance from the Venezia goalkeeper. 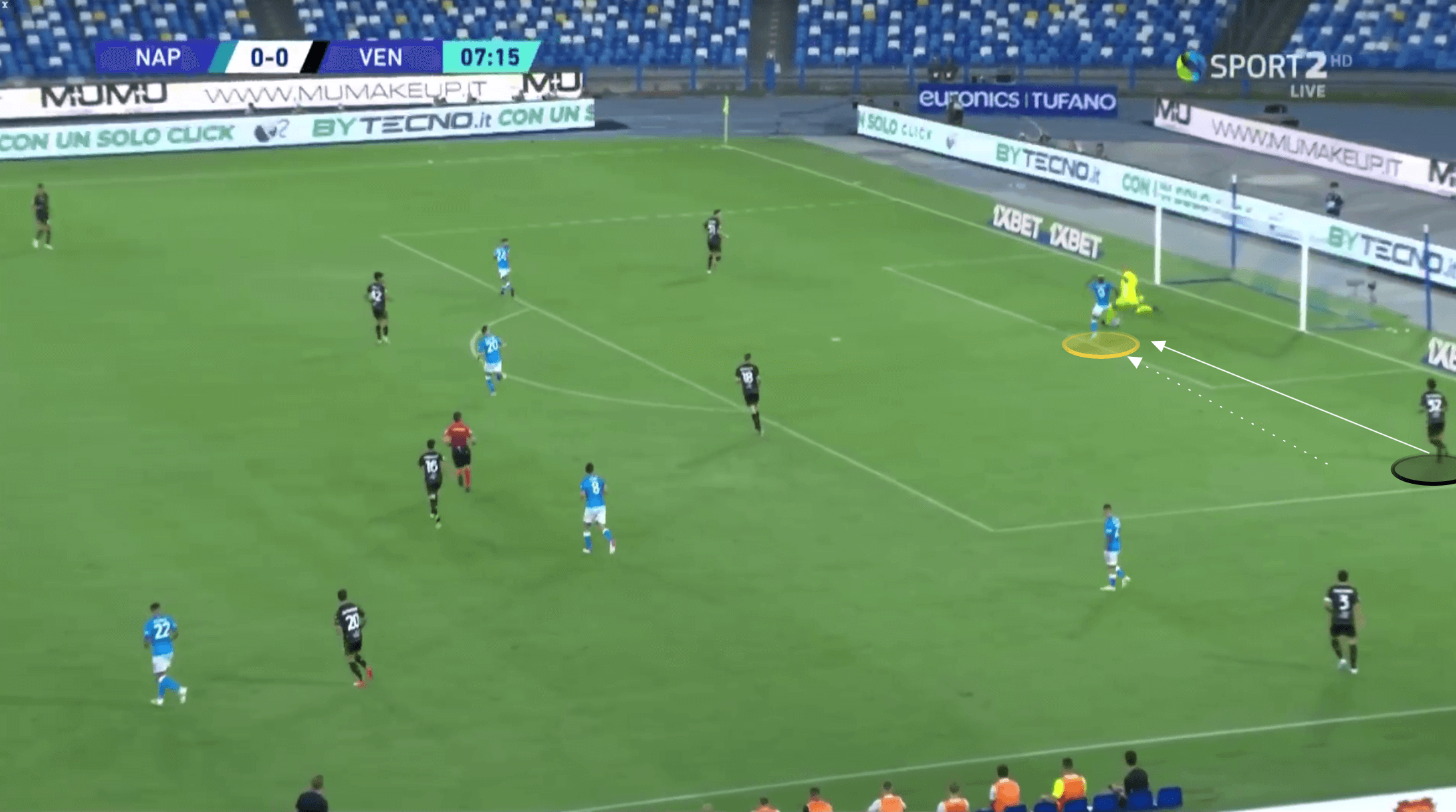 The next image shows the second situation, with Osimhen once again pressing the centre-back and continuing on to press the goalkeeper as the pass back is made. In this example he didn’t decelerate, instead curving his run and using his cover shadow to prevent the opponent from being able to make a pass inside. 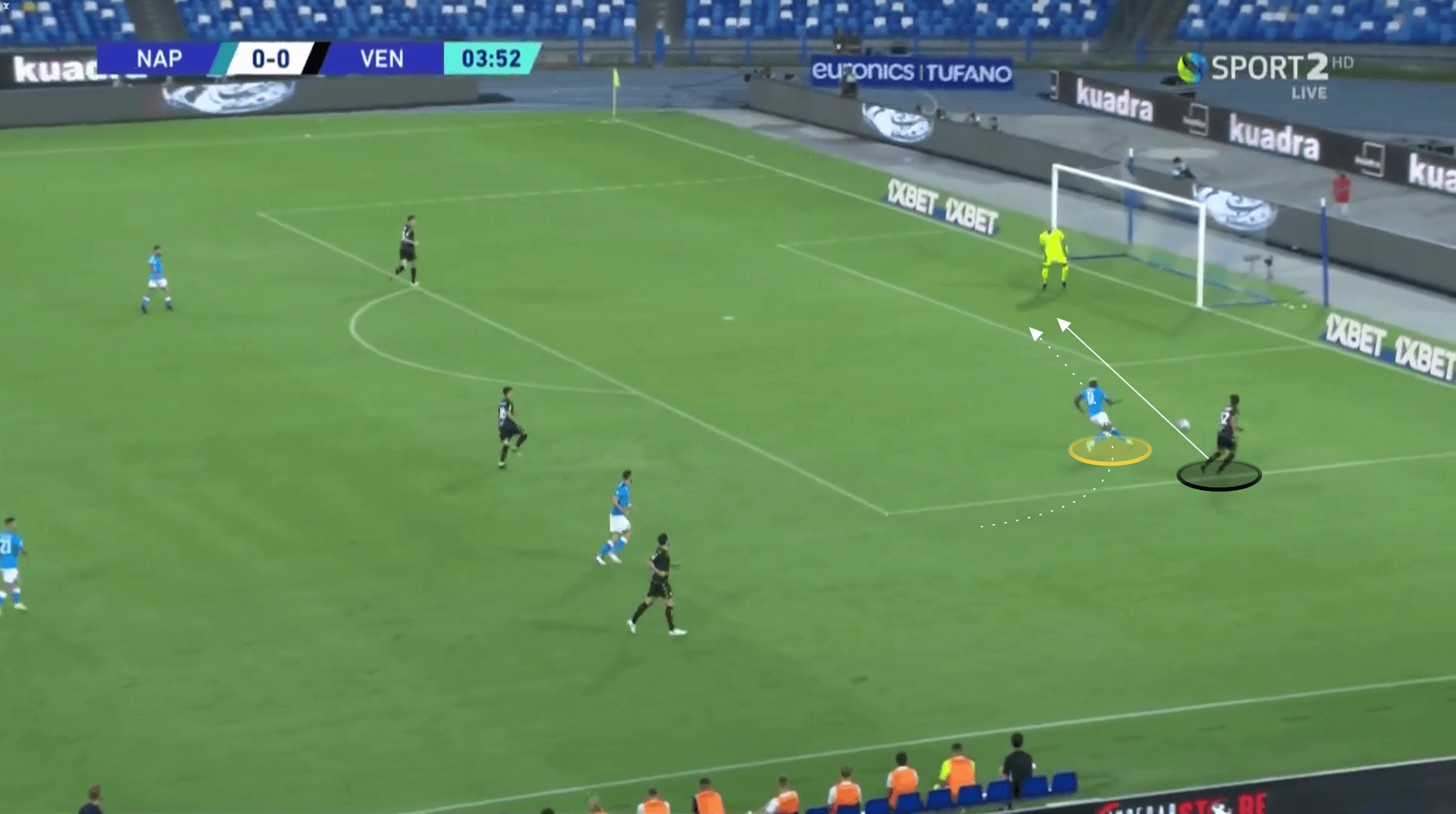 This time, Osimhen shows a phenomenal change of direction and pace to be able to react to the goalkeeper’s pass forward. He reacts to the pass, quickly changing direction and recovering the ball before it hits its intended target. 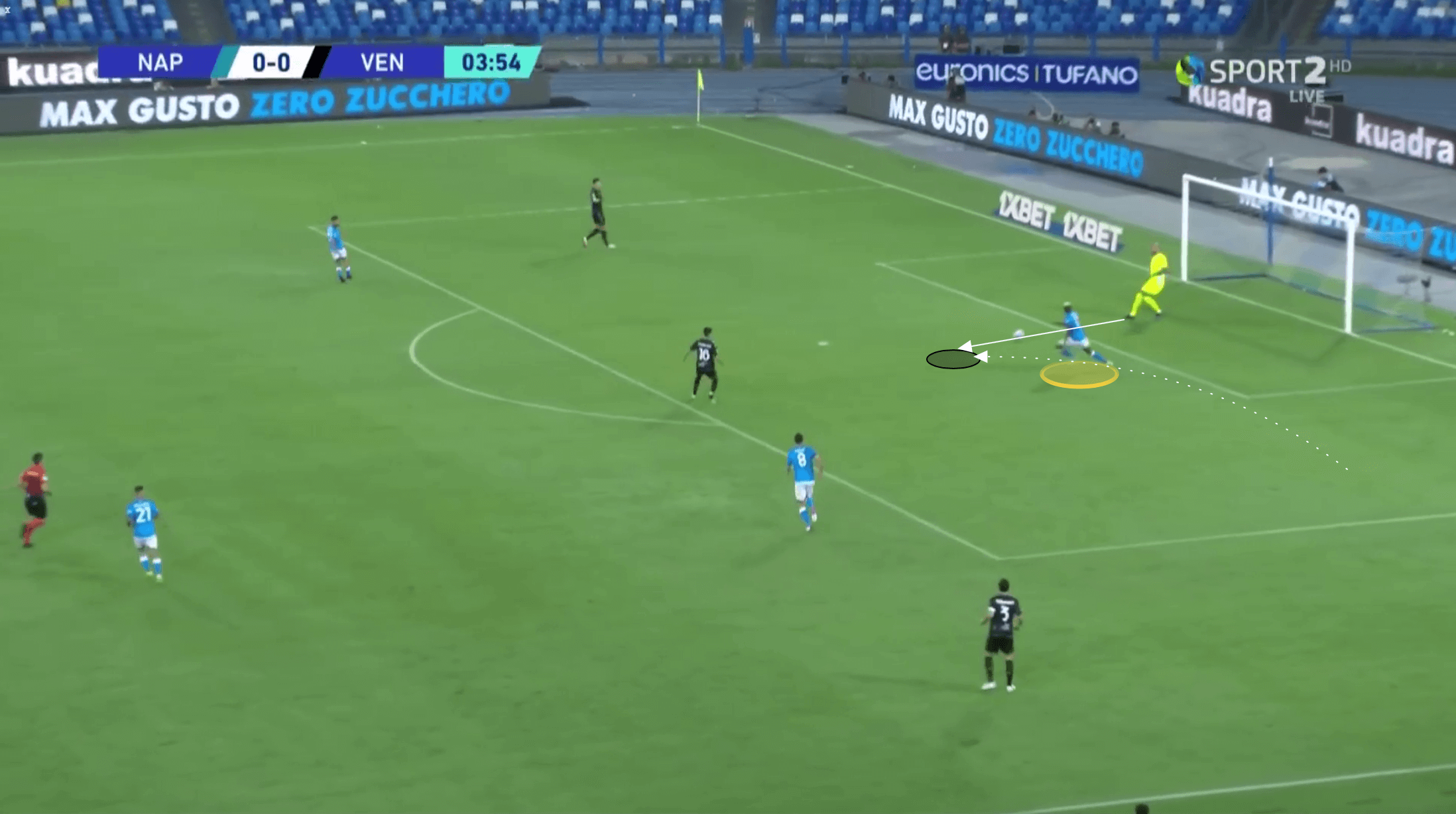 Osimhen is an imposing centre-forward who uses his frame to dominate defenders, performing well in both build-up play as a target for Napoli to focus their possession play around. He is also a threat in the final third from crosses or lofted through passes. He isn’t just an athletic, physical forward though, showing outstanding movement in the final third to regularly get shots away from close distances (which he is unsurprisingly prolific at scoring from). Finally, he is an intelligent and energetic performer when leading the press, regularly covering the distance between the opposition backline at pace throughout the game. His ability to close space on top of being able to change direction quickly makes him a difficult prospect to face for teams building from the back.