I am back again with the next instalment of my scouting series. This time I will be using data analysis techniques and visualisations to identify five young players who are performing well at this stage of the Slovenian domestic season. Slovenia is a fascinating market from a recruitment perspective with a ten-team division and a mix of teams that favour playing and recruiting young players with a view to developing those players and effectively putting them in the shop window before then selling them on for a profit. At that point, the process all starts again.

The Slovenian top-flight has also started to gain a reputation as a landing point for young talented players from Africa who take a more non-traditional route to access top-flight football in Europe. While these players are at the early stage of their development there is a remarkable amount of potential on display each week in this competition,

Data remains an integral part of the recruitment process but when writing these articles I always try to go to great lengths to make it clear that it is only a part of the process. While data is important it cannot be the only measure that you use when you are looking to recruit players to your club. The effective use of data will enable you to cut through the noise in terms of the sheer amount of players that you could potentially sign but it has to be combined with intelligent use of video scouting and then live scouting. By combining all three areas of scouting you will put yourself in a position to build a package of information that will ensure that your recruitment is as informed as it can possibly be.

For this article, I have identified five interesting players. One central defender, one fullback, one central midfielder, one winger and a striker who are interesting for different reasons. They all feel as though they will represent value in the market though. 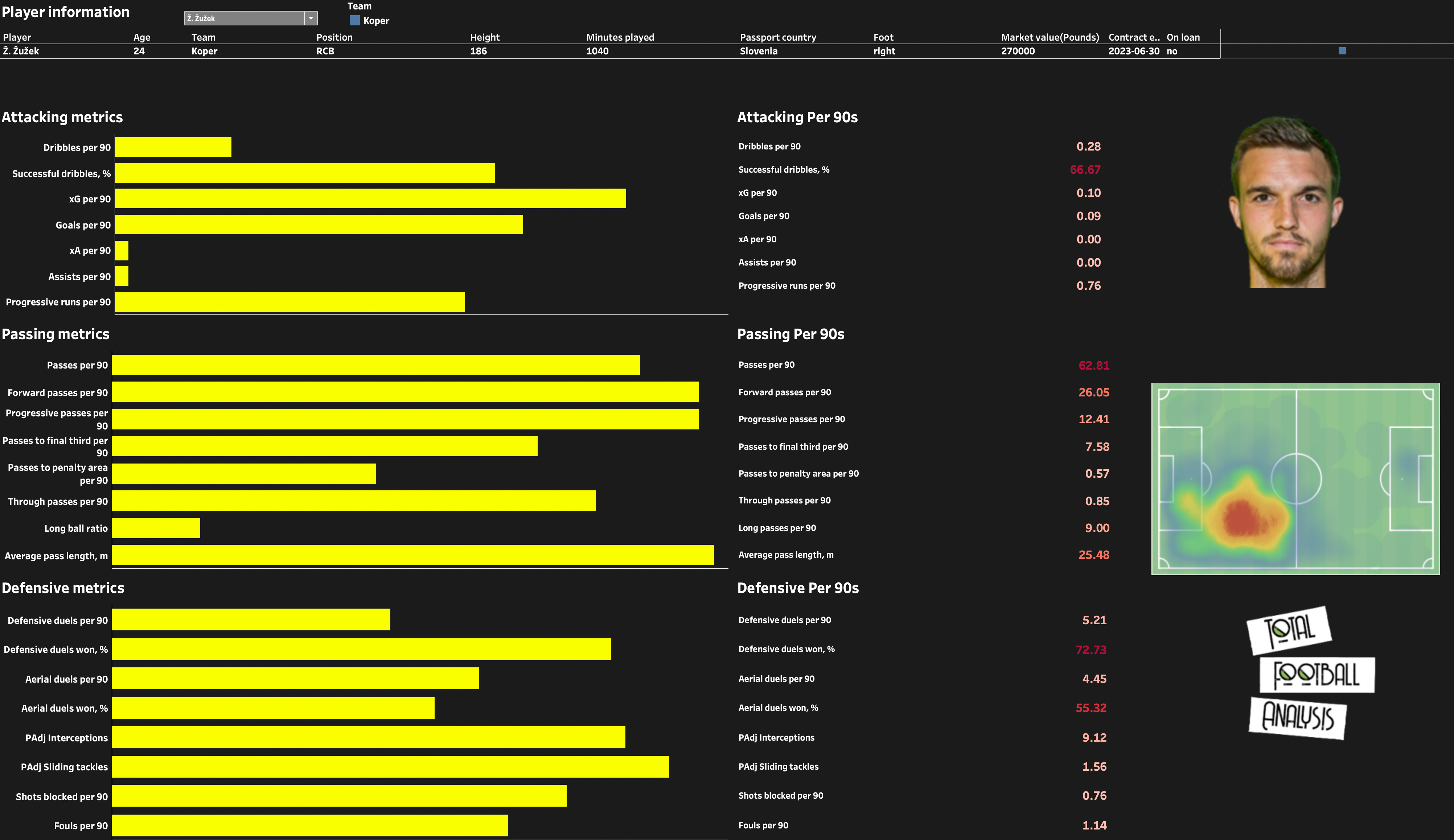 Zan Zuzek is a 24-year-old central defender who is currently contracted to FC Koper, a side who are somewhat surprisingly sitting at the top of the table at the time of writing. He is a product of the youth academy at the club and he has spent his entire career at the club so far. He has been capped at U21 level by the Slovenian national side but he is yet to break into the senior national team. Zuzek is predominantly right-footed and he is listed at 186cm | 6’2″. He plays for the most part as a right-sided central defender where his ability both in the defensive phase and in terms of passing and progression are extremely important for the success that his side are having so far this season.

So far this season we have seen Koper play in a 4-3-3 system with the emphasis on ball progression coming from the central defenders as they build up from the first line. At the time of writing Zuzek has played 1040 minutes in the Slovenian top-flight. We will examine his passing and progression numbers first and he is averaging 62.81 passes per 90 with 12.41 progressive passes and 7.58 passes to the final third. He has the capacity to break lines with vertical passes into advanced positions or to play diagonal passes that switch the emphasis and the angle of the attack. In the defensive phase, Zuzek is strong across the board with a balanced output of metrics. He is currently averaging 5.21 defensive duels per 90 with a success rate of 72.73% along with 4.45 aerial duels with a success rate of 55.32%. He also has 9.12 possession adjusted interceptions this season as he displays his excellent reading of the game.

Zuzek has an interesting profile and it feels as though he will leave this coming season. If he does so he will be best placed in a possession-based side who are looking for extra ball progression from their defenders. 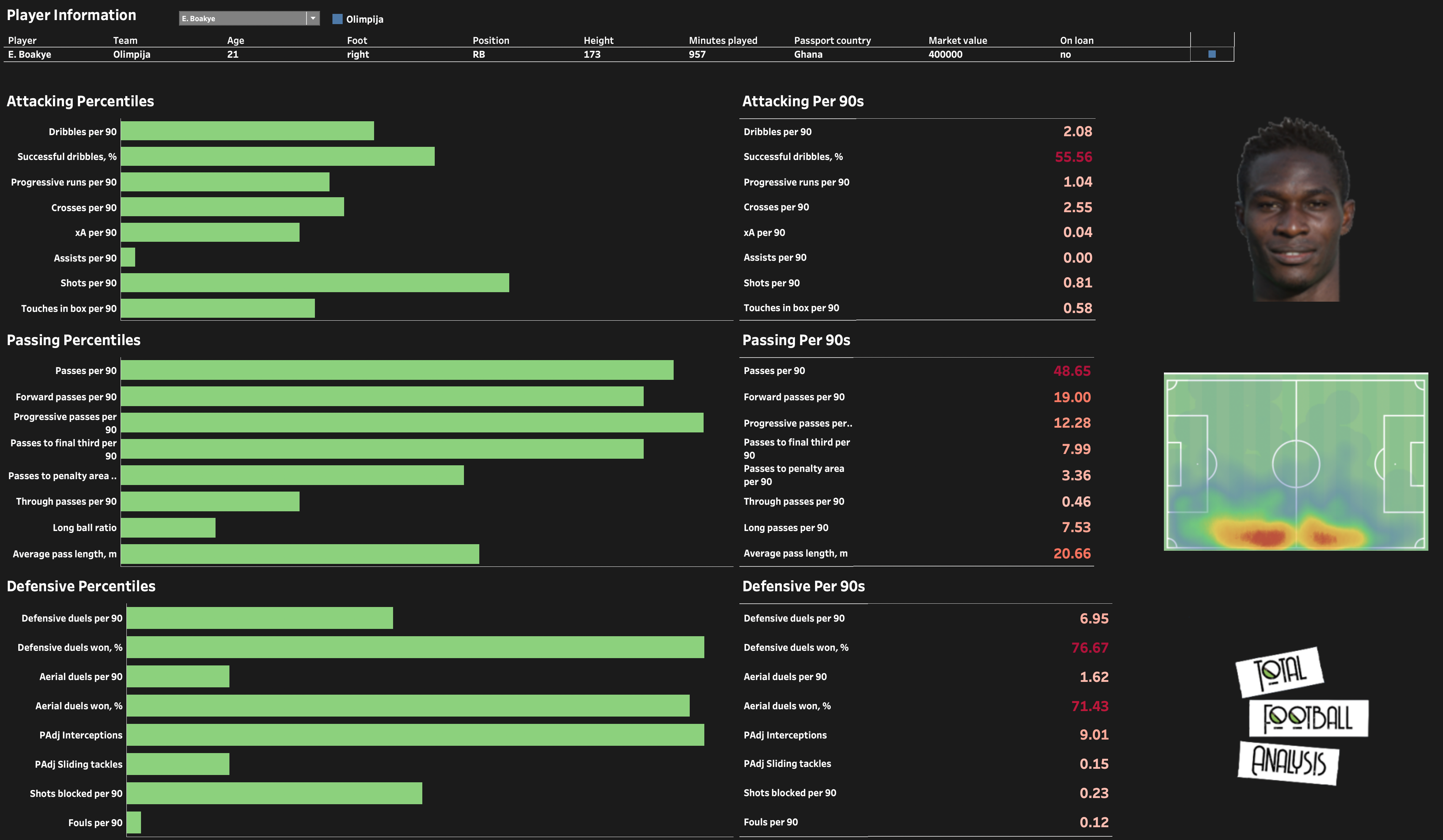 Eric Boakye is a 21-year-old Ghanaian right-back who is currently contracted to Olimpija who are currently in third place in the table. He moved to Slovenia in 2018 having initially played for Asokwa FC in his native Ghana and he has been developing into an extremely interesting fullback who is capable of contributing effectively in all phases of the game although he is perhaps better placed as a ball progressor from the fullback as opposed to being a ball carrier. Boakye is predominantly right-footed and listed at 173cm | 5’8″ with a relatively broad build. Olimpija tend to play in a 4-2-3-1 system and Boakye plays as a traditional style right-back.

At the time of writing this article Boakye has played 957 minutes in the domestic top-flight. His passing and progression numbers are especially impressive and he is averaging 48.65 passes per 90 with 12.28 progressive passes per 90 and 7.99 passes to the final third per 90. Boakye is a creative passer who likes to bend the ball around the defensive line from the fullback position in order to access the forward runs that are being made by the forward players to access space behind the opposition defence. He is a good crosser of the ball and he averages 2.55 crosses per 90 and 3.36 passes to the penalty area per 90. Defensively Boakye is also performing well. He is averaging 6.95 defensive duels per 90 with a success rate of 76.67% and he is registering an impressive 9.01 possession adjusted interceptions.

Boakye has a contract that is reported to be ending at the end of this season. I would expect to see him move at that point to join a more competitive league. 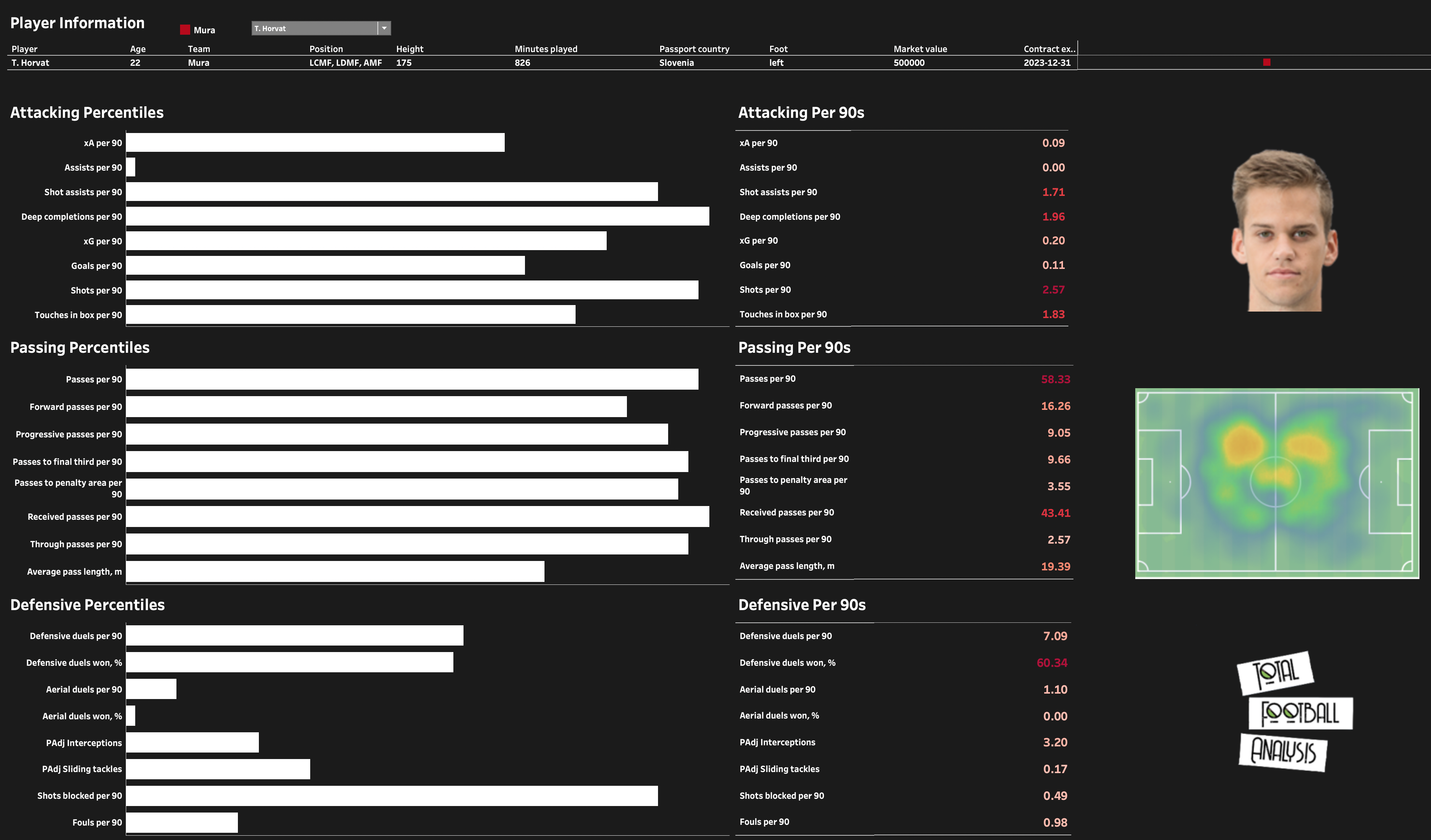 Tomi Horvat is a 22-year-old Slovenian midfielder who is currently contracted to NS Mura who are currently in fifth place in the table. Horvat is a product of the youth academy at Maribor but he moved to Mura in 2018 and has been developing well and going from strength to strength over the last 12 months. He is an attacking central midfielder who is predominantly left-footed and he is listed at 176cm | 5’9″ with an athletic build. Horvat is extremely aggressive in possession of the ball and he displays the ability to find angles to progress the ball even against teams that look to play in a deep and compact defensive block. As you can see from his data profile above he is especially interesting in the attacking phase and in the passing and progression phase.

Tomi Horvat profiles as a player who will be of interest to sides that are looking to add a regular goal threat and presence in the final third for their side. 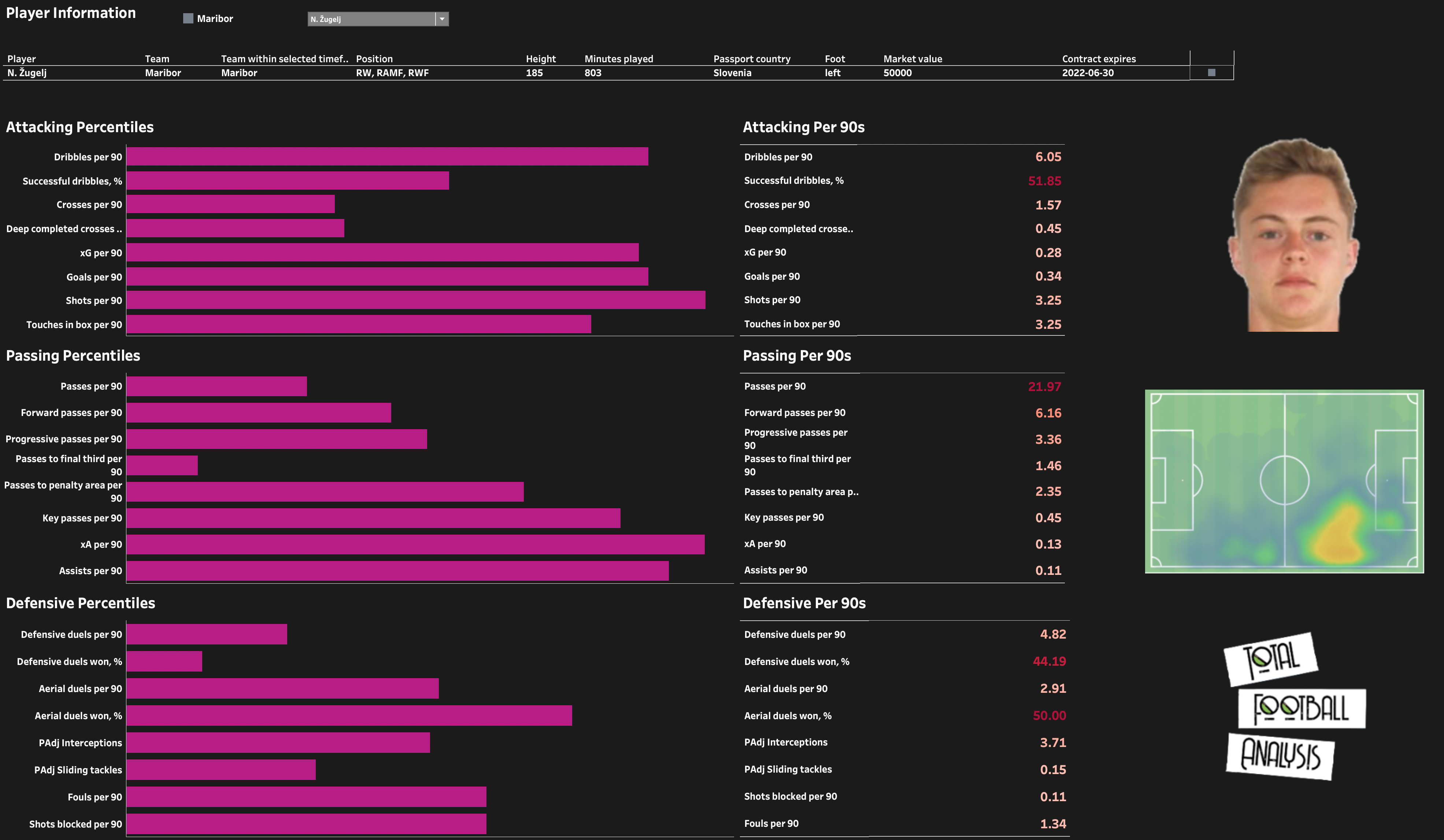 Nino Zugelj is a 21-year-old right-winger who is currently contracted to Maribor who are sitting fourth in the Slovenian top-flight and perhaps underperforming so far this season. He is predominantly left-footed and therefore he likes to play from the right-hand side where his ability to cut inside and drive at goal diagonally produces a great deal of goal threat for his side. Zugelj is a product of the Maribor academy but he has already been out on loan spells at Drava Ptuj and NK Bravo in order to accelerate his development. He is listed at 185cm | 6’1″.

Zugelj is a dynamic ball carrier who offers a significant goal threat for Maribor. At the time of writing he has played 803 minutes and he is averaging 6.05 dribbles per 90 with 3.25 shots per 90 and 3.25 touches in the opposition area per 90. He likes to burst forward with the ball and attack and engage the opposition defensive unit whenever possible. He is currently averaging 0.34 goals per 90 from an xG per 90 of 0.28. He is also creating chances for teammates with an average of 0.11 assists per 90 from 0.13 xA per 90.

Zugelj profiles as a wide player who is ready now to take the step up to a more competitive league where his physical and technical profiles are likely to enable him to be productive. 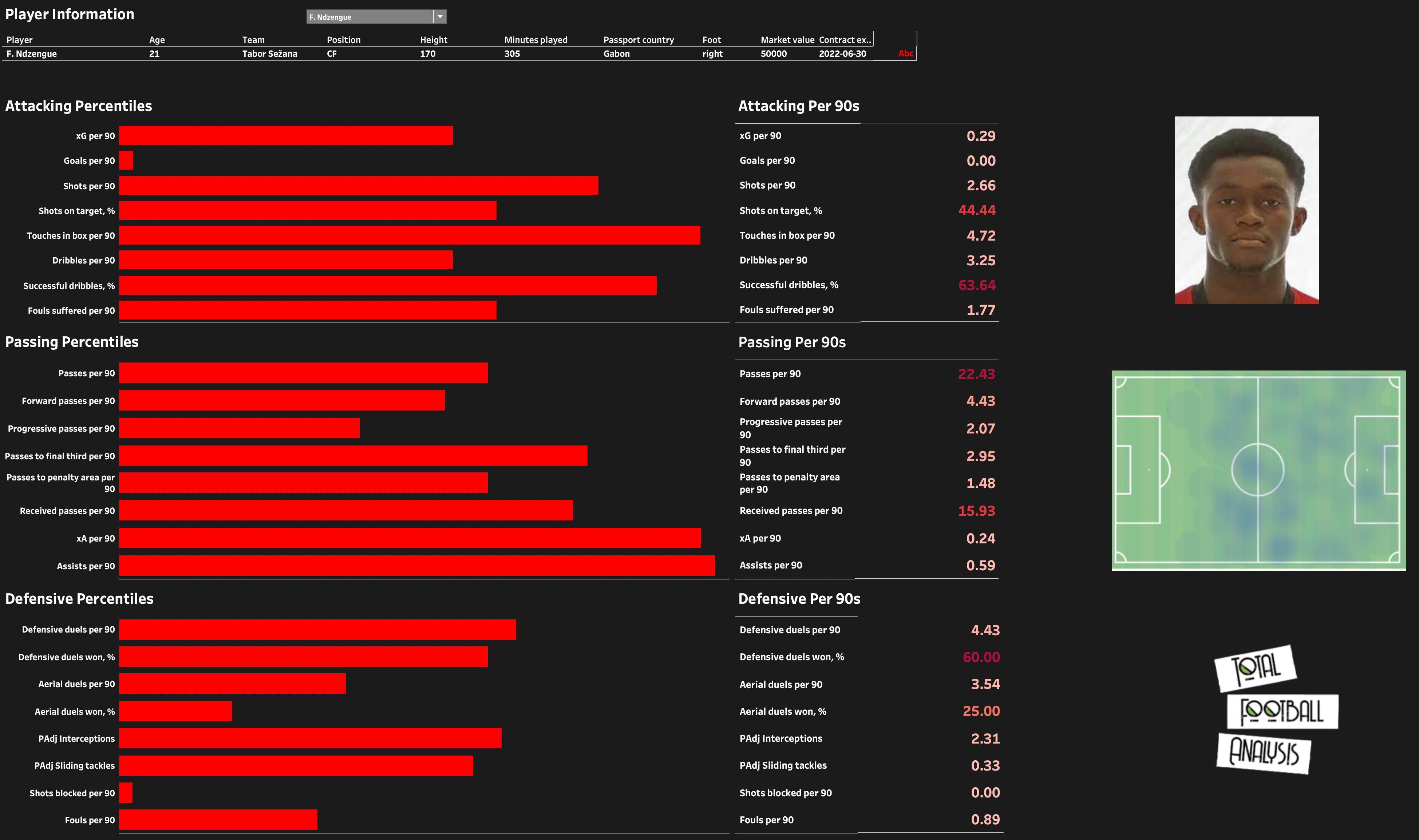 Fahd Ndzengue is a 21-year-old Gabonese forward who is currently contracted to Tabor Sezena who are sitting in sixth place in the league. He is a dynamic forward player who profiles as a player who can play through the centre or in the wide areas. Ndzengue first moved to Slovenia in 2019 having originally played for CF Mounana in his native Gabon. He is predominantly left-footed and he is listed at 180cm | 5’11”. Ndzengue is a player who has the talent and capacity to change a game with a moment of explosive speed or movement that can unlock opposition defences.

Of all of the players on my shortlist for this article, he is the one with the fewest minutes this season and as such the smallest sample size. He has played 305 minutes so far this season and I think we should probably address the elephant in the room straight away. He has yet to score a league goal this season. Despite this, however, his underlying attacking metrics are good and I believe this means that he will soon be among the goals as he is averaging 0.29 xG per 90 along with 2.66 shots per 90 and 4.72 touches in the opposition area per 90. The fact that he has not actually scored despite these metrics just means that his value is going to be slightly lower than it might otherwise have been. There is definite value here.

Also, while he is not scoring himself his creative numbers are excellent with an average of 0.59 assists per 90 from an xA per 90 of 0.24.

Ndzengue is only valued on Transfermarky at £45k and his contract is up at the end of this season. He represents genuine value for a side who are willing to bet on the potential that is without a doubt there.

The PrvaLiga is still one of my favourite leagues from a recruitment point of view, especially when we consider the value that exists. I think that you will be able to see from the list of players that have been discussed above that there is real value and talent throughout the league.