Former Hearts midfielder Sam Nicholson’s recent move back to Colorado Rapids from EFL League Two side Bristol City has now taken the number of Scottish players plying their trade in MLS to six.

Other Scottish players to turn out in the MLS over the years have included former Rangers striker Kenny Miller, who enjoyed a two-year stint at Vancouver Whitecaps between 2012-14, defender Steven Caldwell, who captained Toronto FC, and former Celtic winger Jamie Smith who made 62 appearances for Colorado from 2009-13.

More recently, Hearts’ Gary Mackay-Stevens had a short spell with Ronny Deila’s New York City in 2019-20 while current Hibs defender Chris Cadden made a handful of appearances for Columbus Crew in 2020.

In this data analysis, we will assess how the current crop of Scots are performing in the 2022 MLS season.

The statistics used for this analysis include all players in the same position(s) as each of the Scottish players. Players included in the datasets have all played a minimum of 700 minutes in this season’s MLS.

Data is retrieved from Wyscout, and Python is used to convert the per 90-minute numbers into percentile ranks. The percentile ranks are then presented in a pizza chart to visualise each player’s performance across several key metrics.

The only player of the five that have been in MLS since the start of this season who is not included here is former Kilmarnock centre-back, Stuart Findlay, as he has only played on a few occasions for Philadelphia Union. 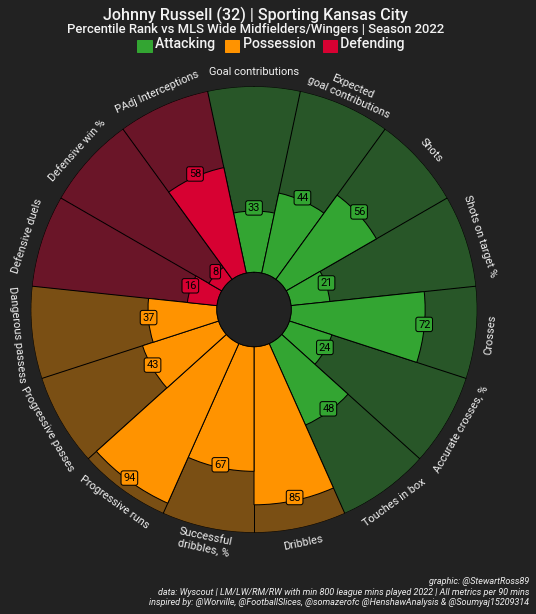 Now in his fifth season in MLS, Johnny Russell has been a key player for 2013 MLS Cup winners Sporting Kansas City.

Russell, who played over 100 games at Dundee United and at Derby County before making the move across the pond, has been an ever-present for KC, racking up 45 goals and 25 assists since joining in 2018.

Looking at his pizza chart for the 2022 season, the Glasgow-born winger appears to continue to be an important player for the Missouri side.

Ranked against other wide midfielders and wingers, his attacking numbers are a mixed bag. His just below-average score for his expected goal contributions is not bad though, considering Kansas are currently sitting in the bottom place of the Western Conference. He has also produced an above-average rank for the volume of his shots and crosses. However, he is in the bottom 25th percentile rank for shots on target % and his crossing accuracy.

The possession section shows Russell’s ball-carrying to be one of his main strengths. Only Douglas Costa (4.48) and Alan Velasco (4.05) ranked higher for the number of progressive runs per 90 in MLS than Russell (3.83) in this dataset. He is also above the 75th percentile rank for the number of dribbles he attempts per 90 with an above-average score for his successful dribble percentage.

On progressive passes and dangerous passes (a combination of key passes and through passes), Russell ranks just below average for an MLS wide midfielder or winger.

Defensively, he hasn’t been involved in many defensive duels and ranks low for his win rate for them. He does appear to have been helping defensively when it comes to positioning (a combination of shots blocked and PAdj interceptions) which is above average. 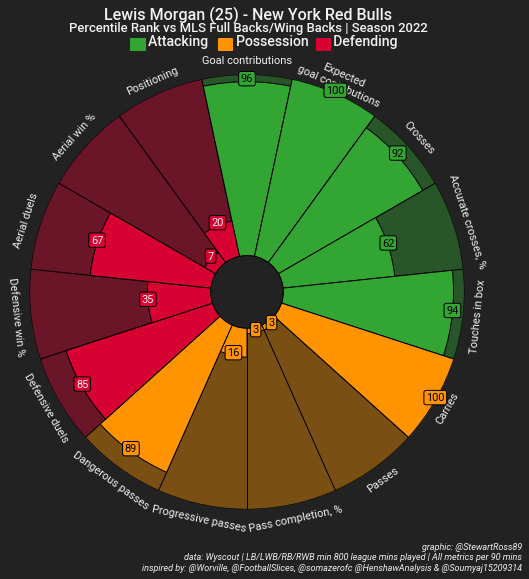 Former Celtic, Sunderland and St Mirren player Lewis Morgan has been something of a revelation since joining MLS back in 2020. Morgan initially joined David Beckham’s expansion club Inter Miami CF, where he was MVP in his debut season, netting five times and providing five assists as they made the MLS Cup Playoffs.

Inter Miami were forced to sell Morgan for General Allocation Money after they were fined for breaking roster rules when they signed former French international midfielder Blaise Matuidi. New York Red Bulls were the side that benefitted, with Morgan picking up exactly where he had left off in Miami.

Interestingly deployed at right wingback in New York RB’s 3-4-1-2 more often than any other position so far this season, has taken his new role in his stride.

Looking at his pizza chart, which will be slightly skewed as he still also played a number of minutes in more familiar roles such as left-wing and in a central attacking midfield role, we can see that Morgan is putting up impressive attacking numbers.

He has the top expected goal contributions for a full-back/wing-back in MLS with his actual goal contributions ranking very high too, he has registered 8 goals from an xG of 4.45 and has 1 assist from an xA of 3.42. He ranks very highly for crosses, again this may be inflated due to playing several minutes further forward, while his accuracy rate for his crosses is just above average.

On possession, he also boasts the top rank for carries (a combination of progressive runs and dribbles). He ranks quite low for most of his passing metrics but does have a high score for his dangerous passes. Again, this number may be boosted by playing in more advanced positions on occasions.

Due to his new defensive role, Morgan has been involved in an above-average number of both defensive and aerial duels, but his success rate in both is, perhaps predictably, quite low. He also ranks in the bottom 25th percentile for positioning. 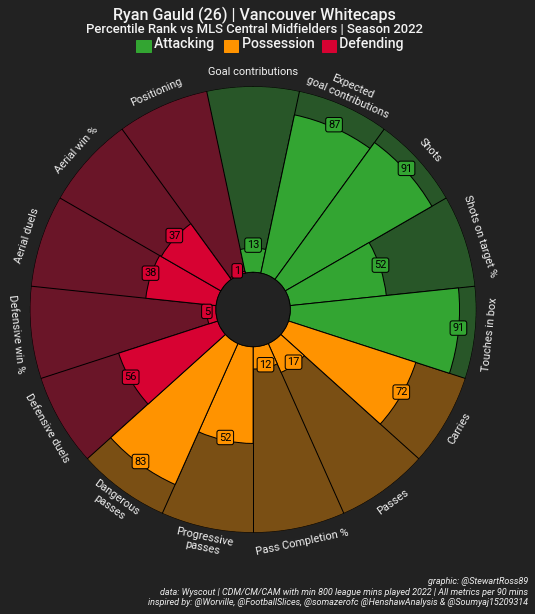 Another former Dundee United man, Ryan Gauld is in his first full season in MLS with Vancouver Whitecaps.

A club with plenty of other Scottish connections, as well as the previously mentioned Kenny Miller, former Aberdeen and Celtic midfielder Barry Robson also played for the Whitecaps while recent Falkirk manager Martin Rennie took charge for two seasons at BC Place from 2011-13.

Gauld, who has also had a spell back in Scotland with Hibs, was signed from Dundee United by Sporting Lisbon in a high-profile £3m move in 2014.

Despite the hype and unhelpful comparisons to Lionel Messi at the time, Gauld rarely played for Sporting. As well as his loan move back to Hibs, he also had temporary spells at Victora de Setubal, Aves and Farense.

He signed permanently with Farense in 2019 and was enjoying something of a resurgence back in the Portuguese top-flight when Vancouver won the race for his pre-contract signature last summer.

On the rest of his attacking numbers, Gauld’s 2.03 shots per 90 see him rank highly for shot volume and just above average for his on-target percentage (33.33%). He also ranks highly for the number of touches in the box he averages (2.16 per 90).

Looking at his possession metrics, we can see that he ranks quite low for passes, which is understandable given a lot of the dataset is made up of central midfielders and deeper defensive midfielders who are likely to be more involved in the build-up. He also has a low rank for his completion, but this may be down to him attempting more difficult passes as his high ranks for dangerous passes (a combination of key passes and through passes).

Defensively, Gauld’s numbers are about what would be expected from a player who has played most of his minutes in an advanced number ‘10’ role in Whitecaps favoured 3-4-1-2 and likely does not have too many defensive responsibilities. 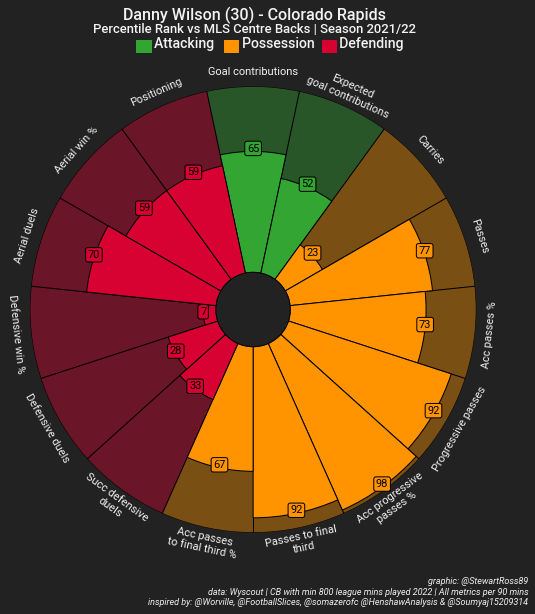 The ex-Hearts and Rangers centre-back has been with Colorado Rapids since 2018 and, like Russell, has been an ever-present for his club.

Another Scottish player to earn a high-profile move early in their career, Wilson was signed by Liverpool legend Kenny Dalglish in 2010 after impressing at Ibrox where he came through the youth ranks.

He only made a couple of appearances at Anfield though and was loaned out to Blackpool, Bristol City and latterly Hearts, who he then permanently joined. After impressing at Tynecastle he returned to Rangers for a three-year spell before his move to Colorado in 2018.

The Rapids are still in with a chance of making the Playoffs and it looks like Wilson has been a key performer for them so far this season, certainly on the ball anyway.

He ranks just under the 75th percentile rank mark for his general passing and for his pass completion. It is his progressive passing that is most impressive with only five other centre-backs in the MLS attempting more than Wilson (11.6 per 90). He also boasts one of the top ranks for his accuracy for them. His average of 8.62 passes to the final third per 90 also gives him a high percentile rank for that metric while he also ranks above average for his accuracy for these types of passes.

Defensively, Wilson’s numbers rank around average for an MLS centre-back. He looks like he has been strong in the air and has an above-average rank for his positioning (a combination of shots blocked and PAdj interceptions).

It is great to see most of the Scottish players in MLS making a mark on the league this season and it will be interesting to see if any do manage to make the Playoffs later this year.

Lewis Morgan in particular seems to be enjoying a new lease of life in North America and it is likely he will be catching the eye of plenty of clubs back in the UK, especially with just 18 months left on his contract at the New York Red Bulls.