Real Madrid won the Supercup in a superior game against Eintracht Frankfurt. Real Madrid won the game between the winners of the Champions League and the Europa League in the Helsinki Olympic Stadium 2-0 (1-0) on Wednesday. The goals for Madrid were scored by David Alaba (37th minute) and Karim Benzema (65th). With their fifth Supercup title, Real catches up with the two record holders FC Barcelona and AC Milan. Real Madrid received 4.5 million euros for the win, and Eintracht 3.5 million euros for participating.

While for Eintracht Frankfurt it was the third match in the regular season (a 4:0 win vs. Magdeburg in the DFB-Pokal and a 1:6 loss against Bayern Munich in the Bundesliga), it was the first competitive match for Real Madrid. Therefore, we will take a look at Real Madrid’s tactics in this analysis. Also in this tactical analysis, we will discover how Frankfurt played without Filip Kostic.

Both teams started with their heroes from last season. Carlo Ancelotti and Oliver Glasner lined up exactly the same teams as in the UEFA Champions League and UEFA Europa League Final 2022. There was only one exception: Eintracht played without Kostic, who is in negotiations with Juventus over a permanent transfer.

The formations also remained the same. Real Madrid played in the classic 4-3-3. The absence of Kostic did not change the well-rehearsed Frankfurt formation of a back-five. 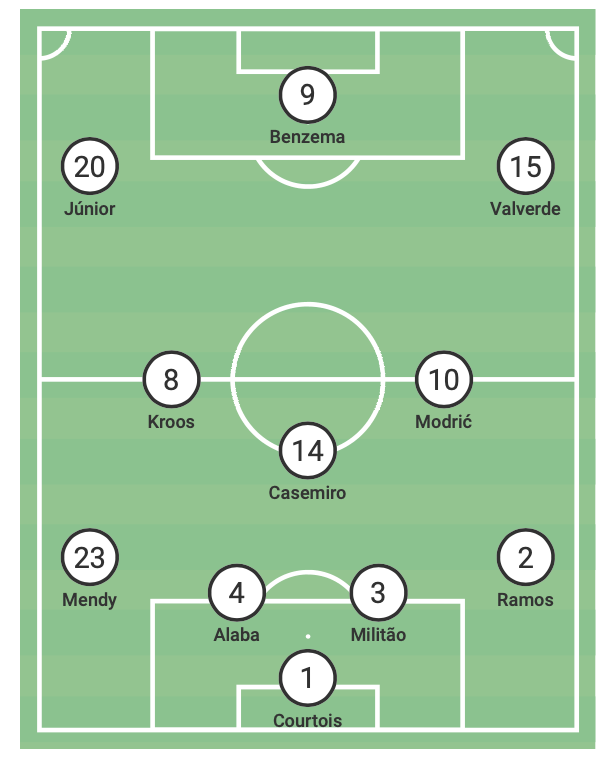 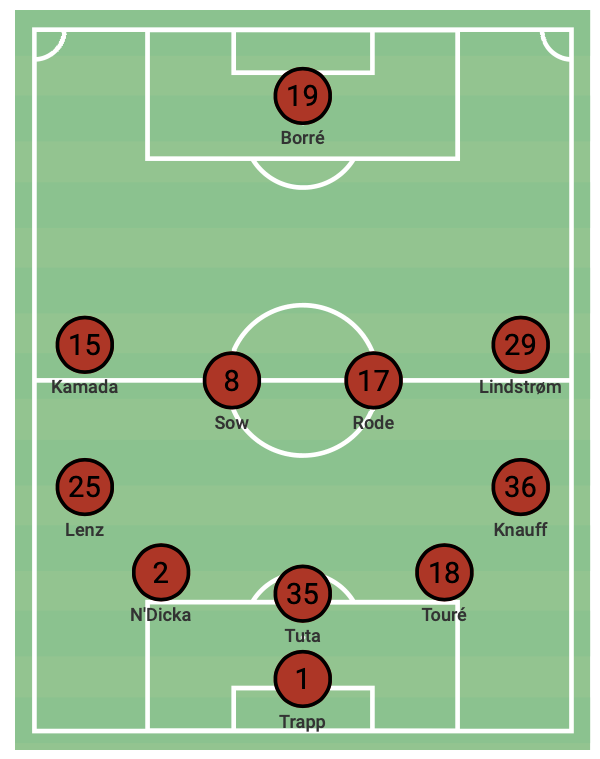 At first, it seemed as if Eintracht was simply playing the next game of the past European Cup season here. Snappy, grippy against the big favourites from Madrid, with no-frills, and technically fine passes into the depths.

At the very beginning of the game, Frankfurt defended in a 5-2-3. The first line would not stay high, but rather at about the level of the centre circle. The back row stood compact. That was one big change from the 1:6 defeat against Bayern Munich last weekend. 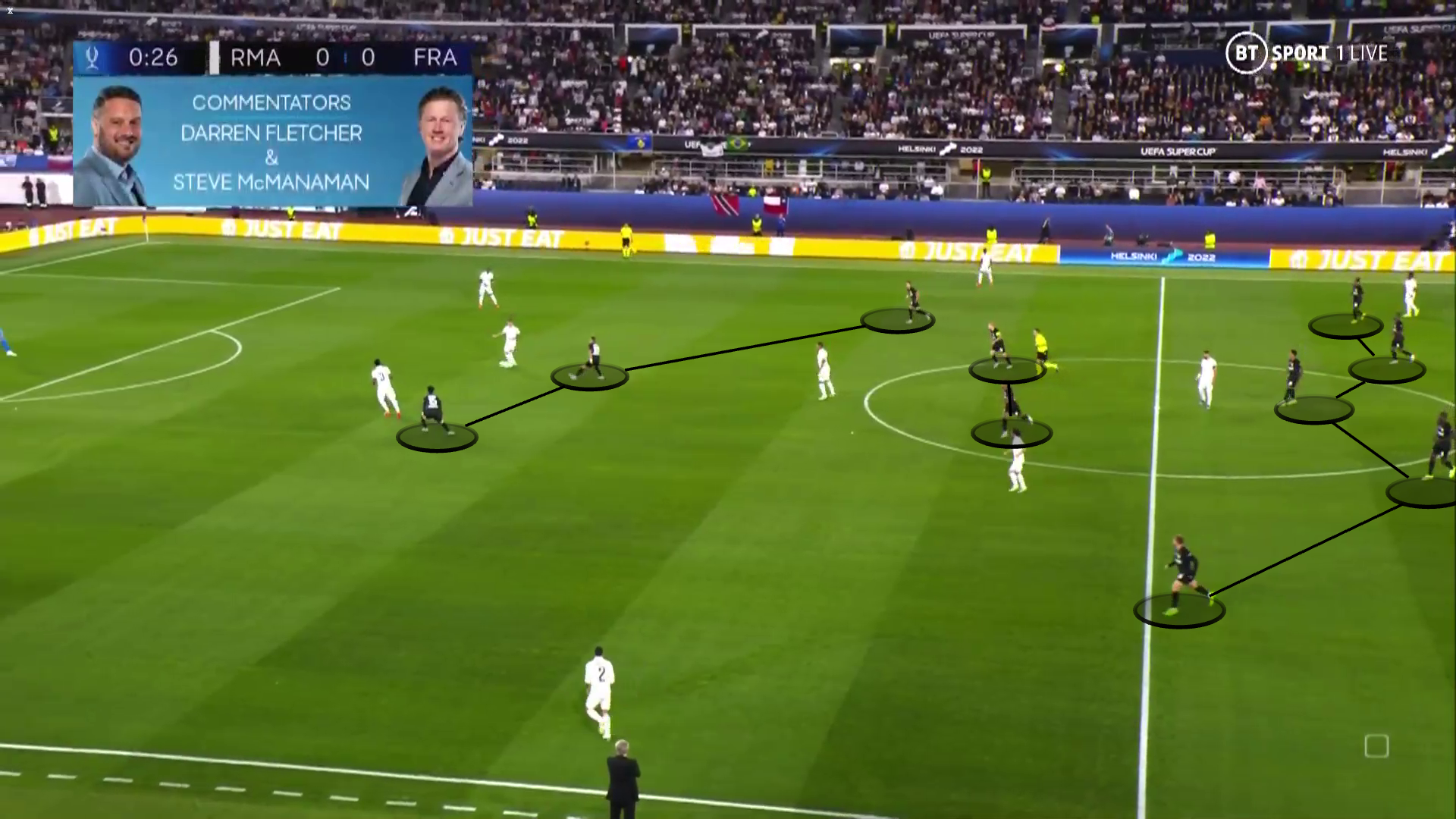 That is how Frankfurt tried to force Real Madrid to play long balls by using clever passing paths and avoiding intensive pressing.

A little later, Frankfurt switched to a 5-4-1. This ensured that the midfield trio of Casemiro, Modric and Kroos were effectively taken out of the game. The latter therefore repeatedly fell into the backline in the build-up phase. Modric left the closed space in the central area of the pitch and moved to the right-back position. Carvajal continued to move down the wing. 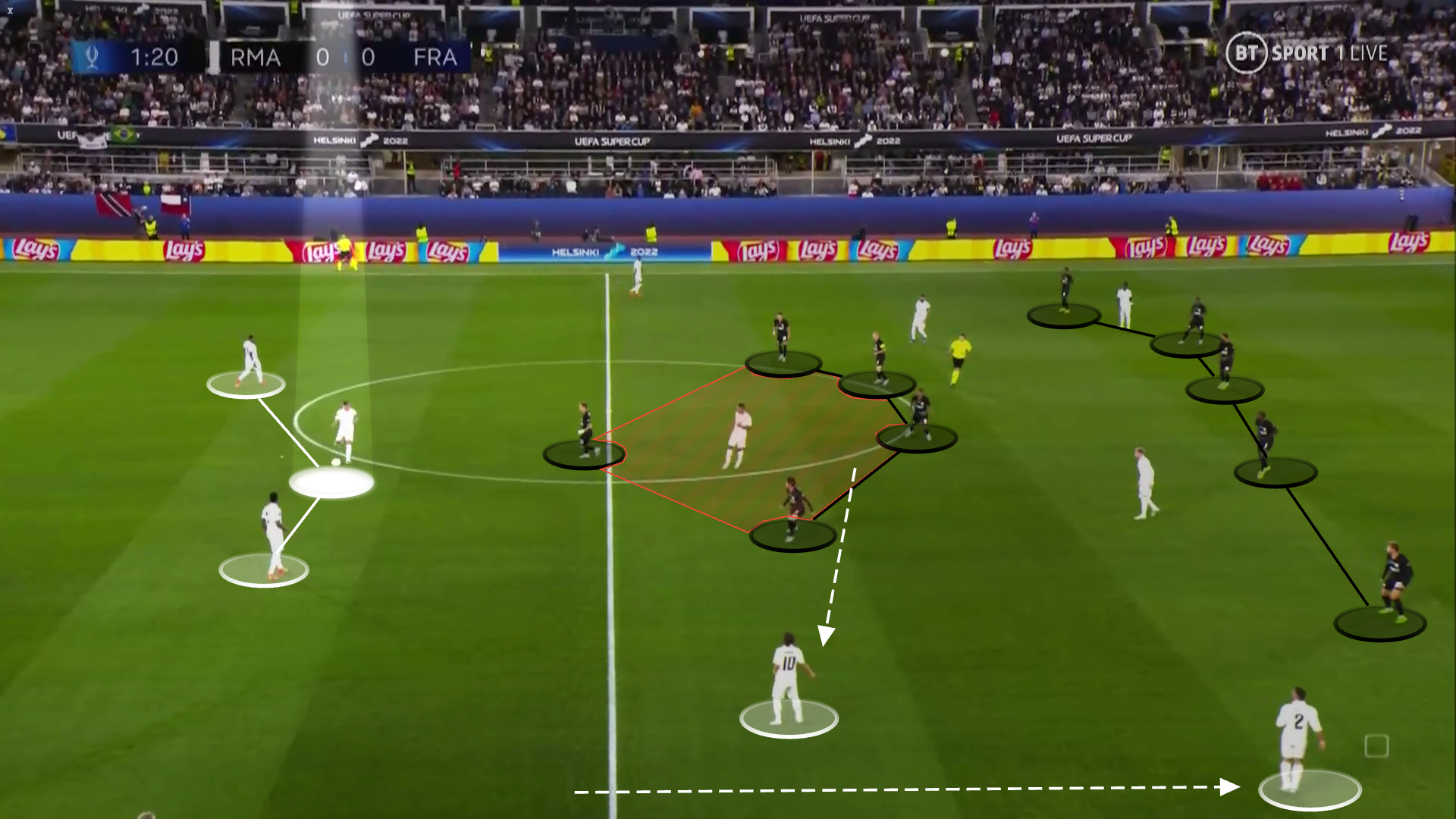 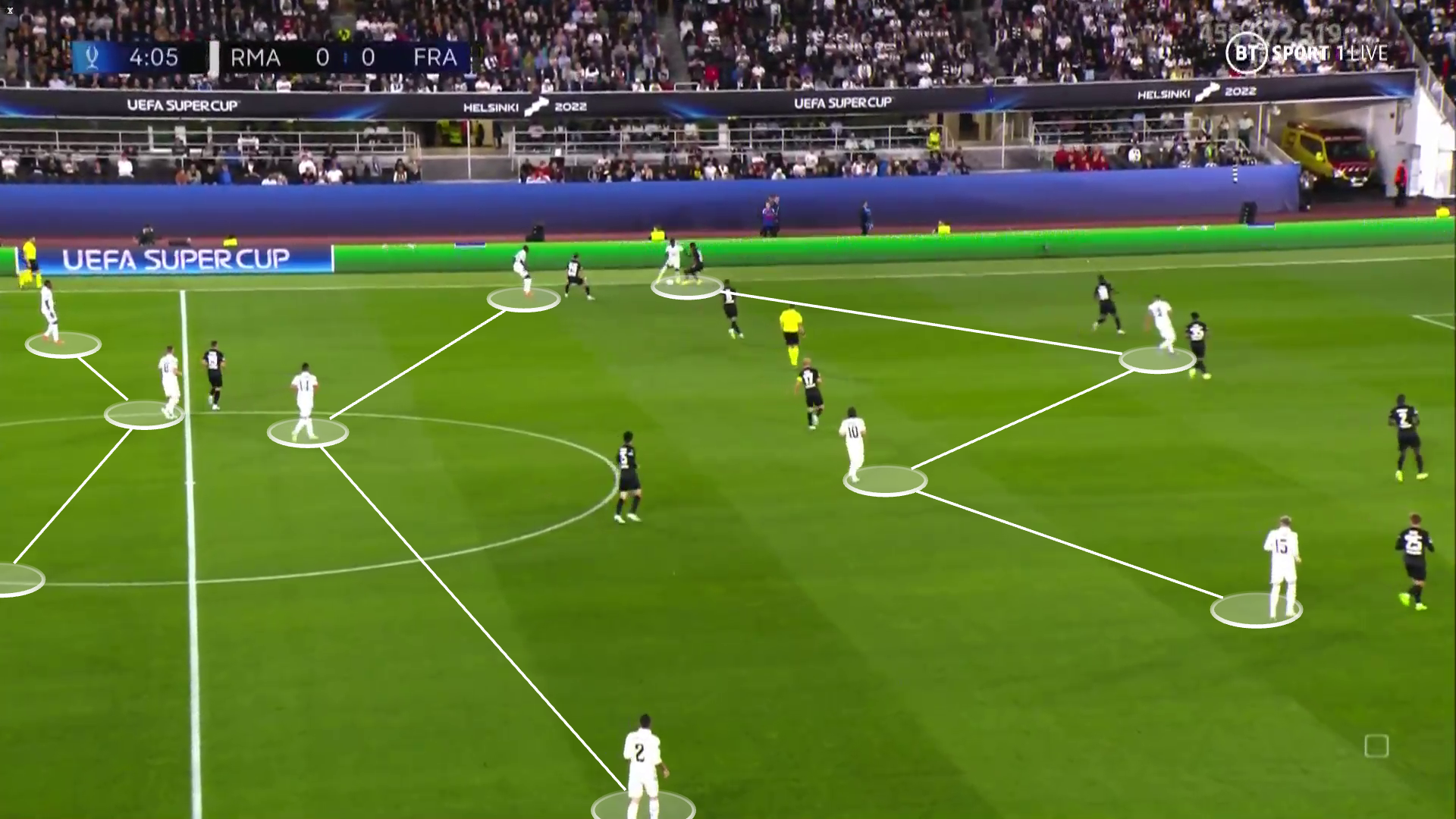 Benzema dropped deep again many times to intervene in the game. In the process, he became an additional player in Real Madrid’s midfield between the lines in order to gain a numerical advantage. So, he could serve as a passing option for Kroos and lure the Eintracht Frankfurt backline. This, in theory, would open up space for Vinicius Jr, Modric and Fede Valverde. 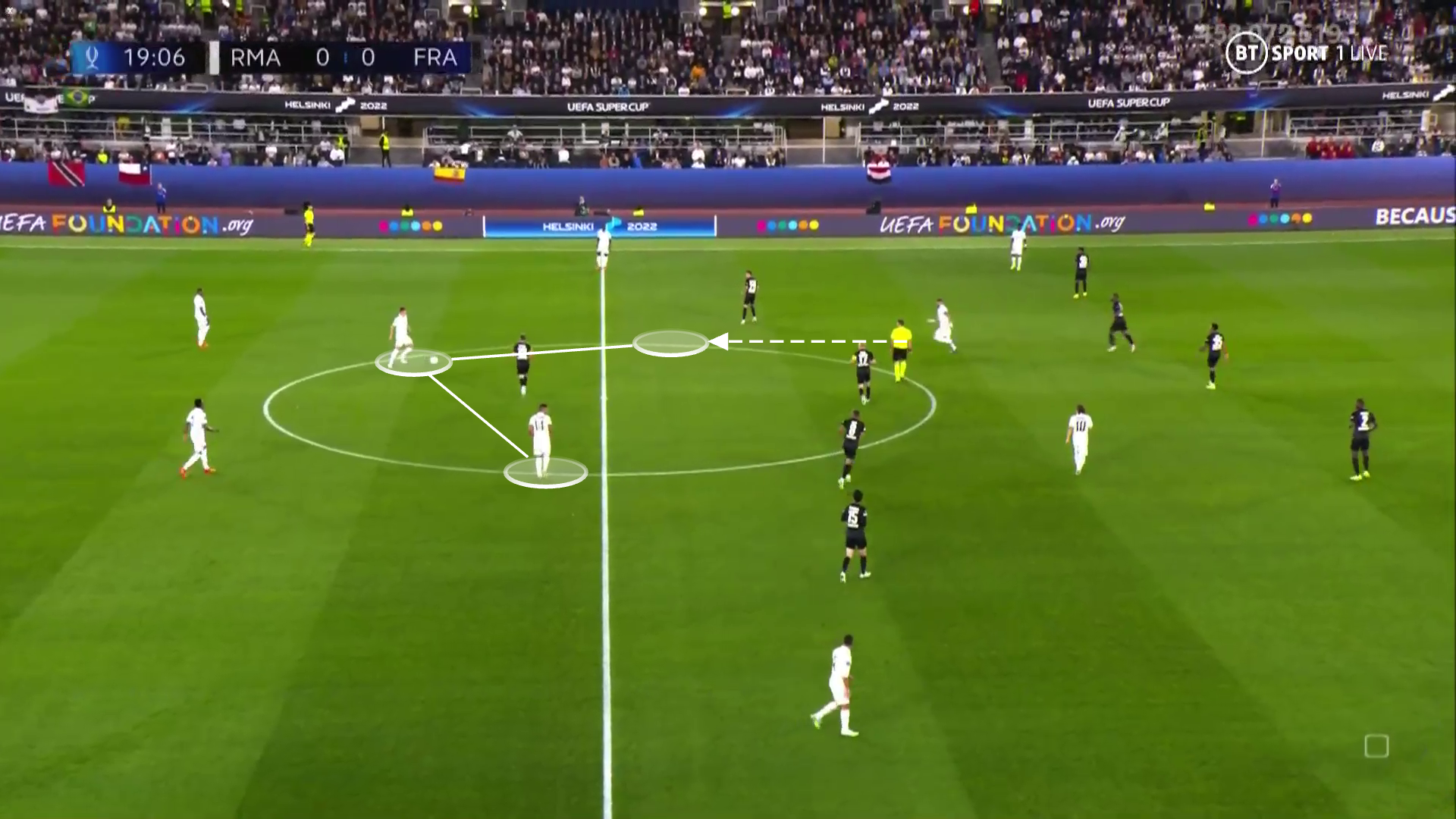 However, this did not really work in this match. Real played a lot more often on the wing. Vinicius Jr. kept faking long runs, then came short and put it down to Benzema. He in turn sent Vincius Jr. on the wing and expected a cross to the centre. Knauff and Toure had problems with these running paths and Vincius Jr.’s acceleration. 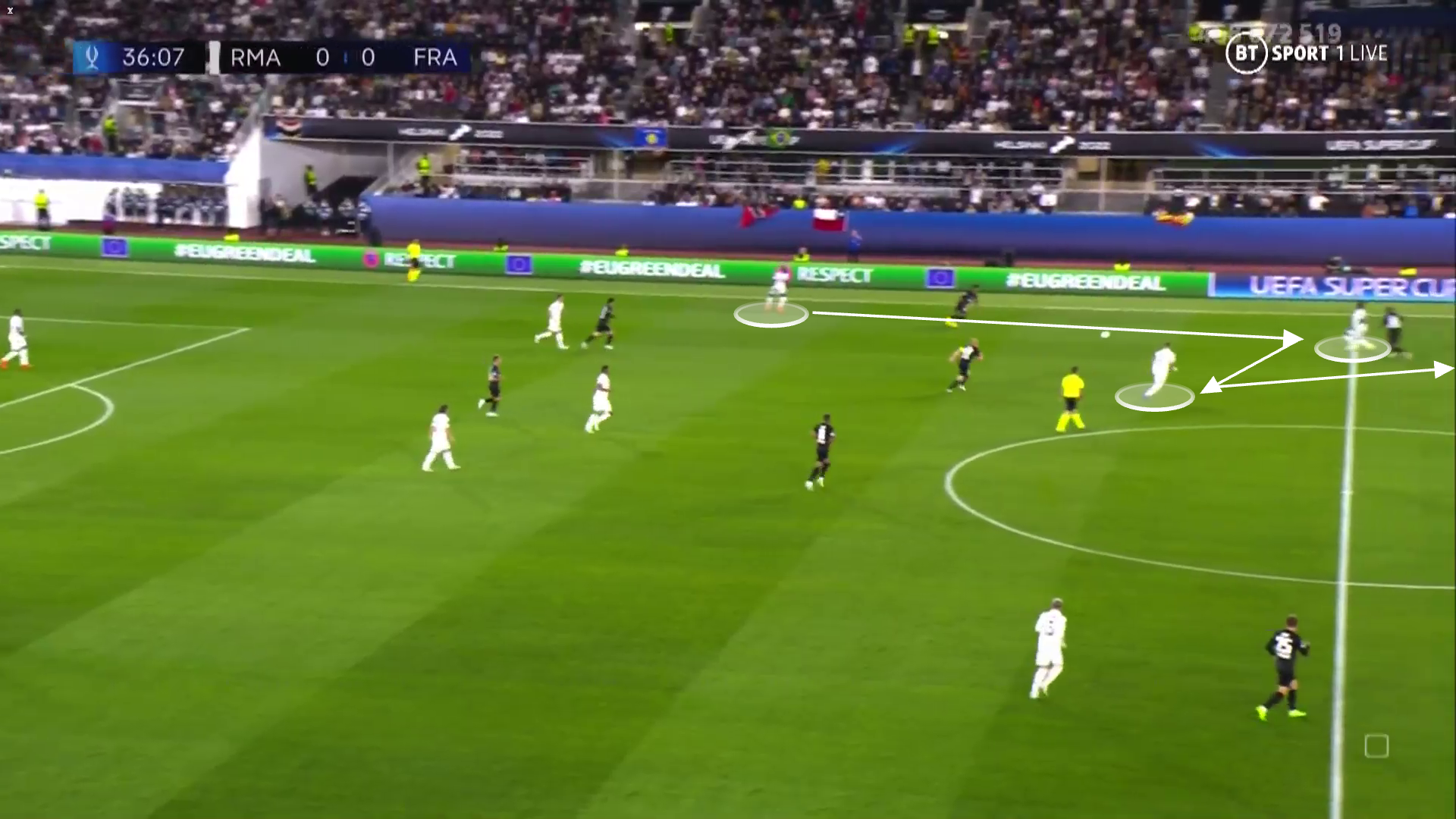 Another tactical method to watch was Mendy and Kroos repeatedly swapping positions during the build-up phase in the second half. Kroos no longer dropped between the centre-backs, but instead to the left-back position. Mendy opened this space by moving into central midfield and hitting the usual runs of an inverted full-back. 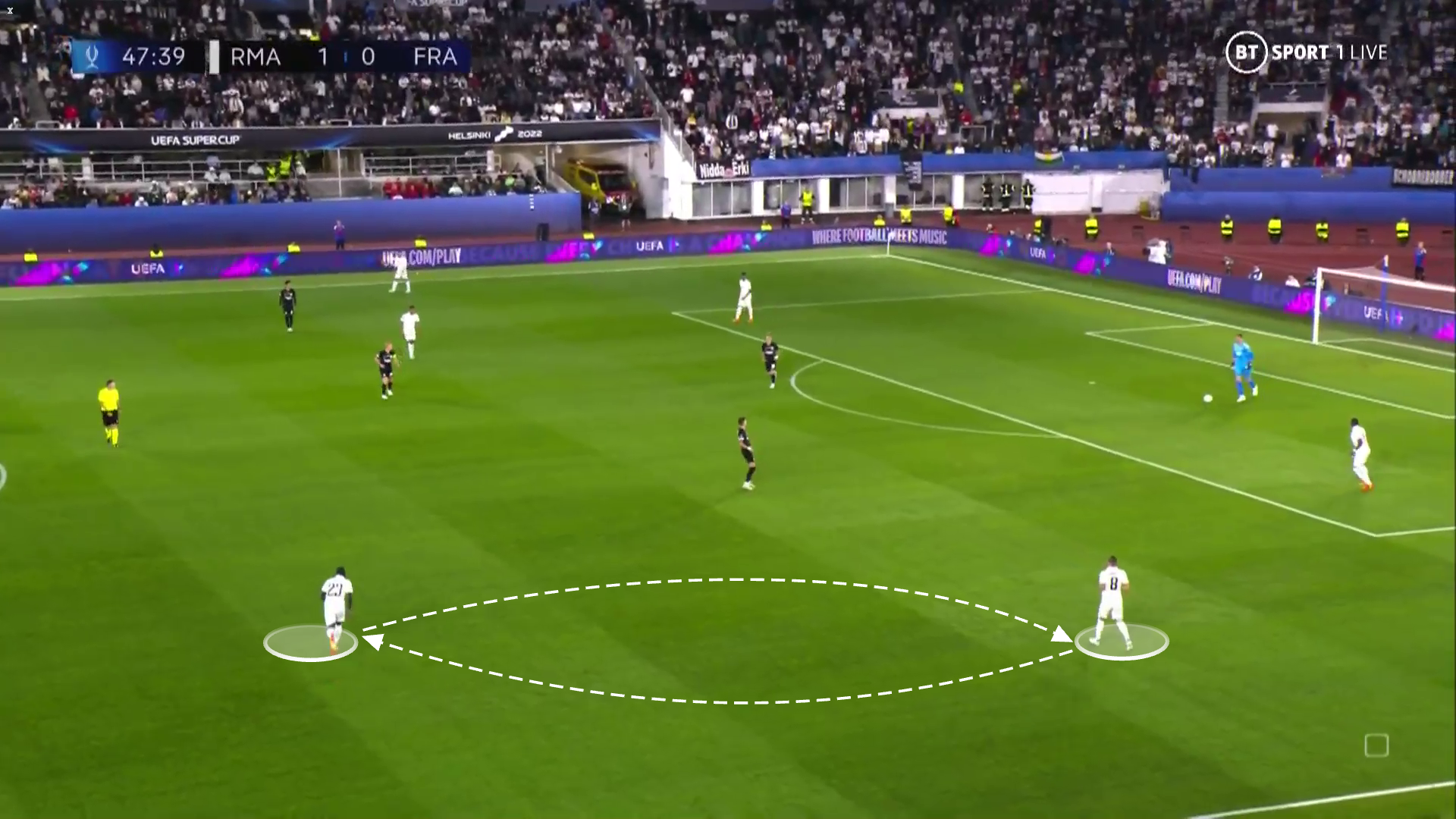 Frankfurt without Kostic but with creativity

It was interesting to see how Frankfurt would play without their best player of last season. Frankfurt’s game was always driven by Kostic on the left wing. With Lenz, he was replaced by an inconspicuous, more defensive fullback. This was clearly noticeable. Most attacks were initiated on the right wing. 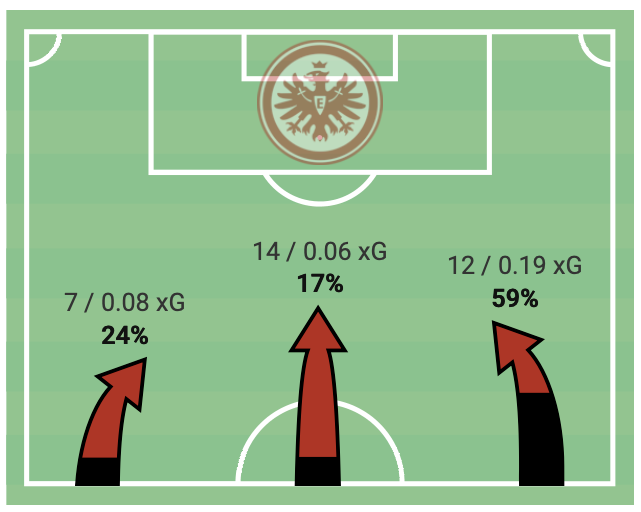 Creativity was mainly burdened upon two players: Daichi Kamada and Jesper Lindström. Both were set up as wingers on the match sheet but interpreted their roles differently.

Kamada kept dropping between the lines, playing more as a classic number ’10’. He opened up space for Lenz and Knauff on the wings. Lindström, on the other hand, made more runs in advanced areas on the pitch. In this way, Frankfurt created a 3-3-4 in the opposition’s half. 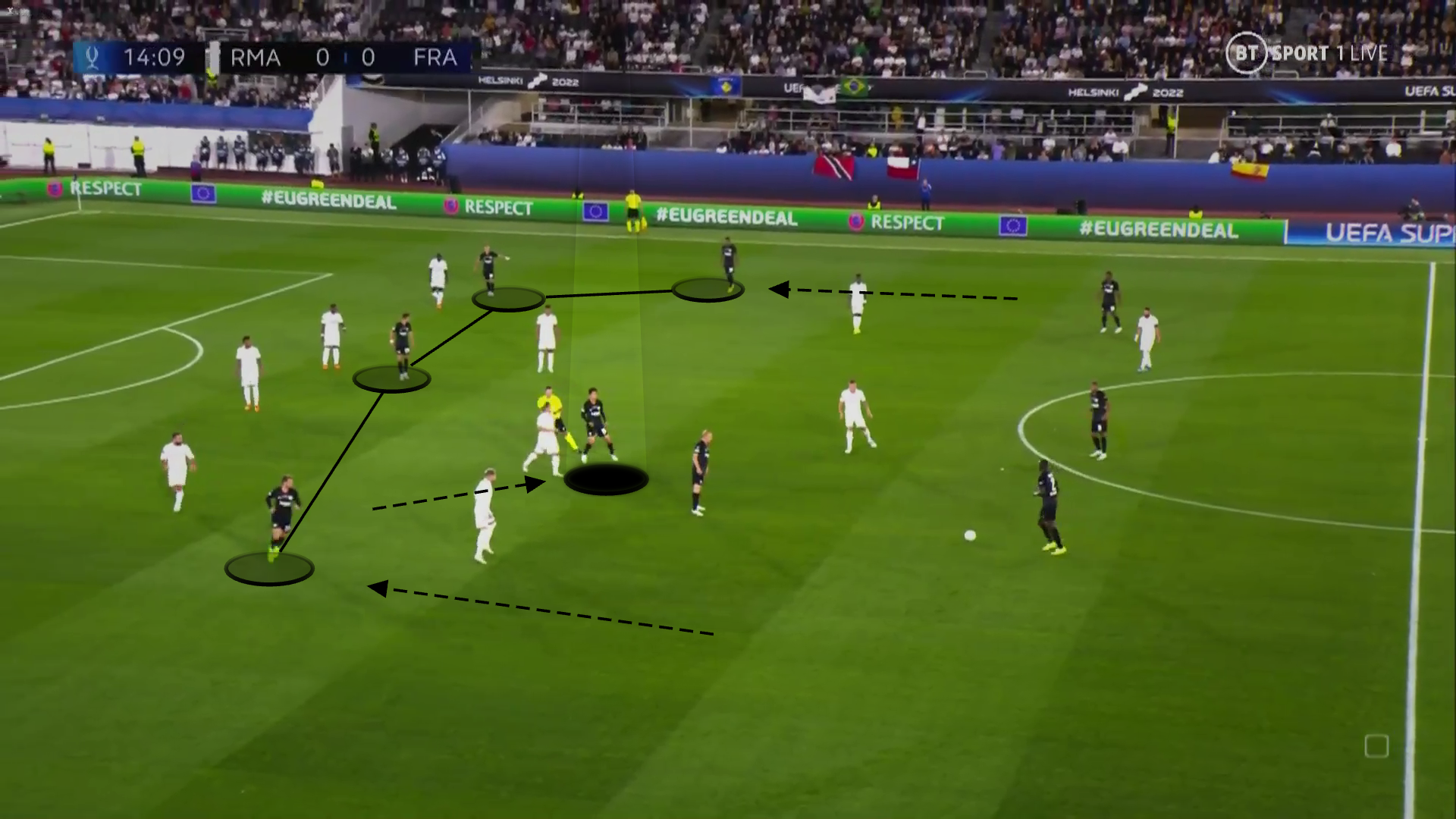 Kamada also dropped very low in the build-up game. He was looking for the space between Real Madrid’s first line and midfield line. So, he was able to take the ball as well as turn on it in free space and without pressure from opponents. 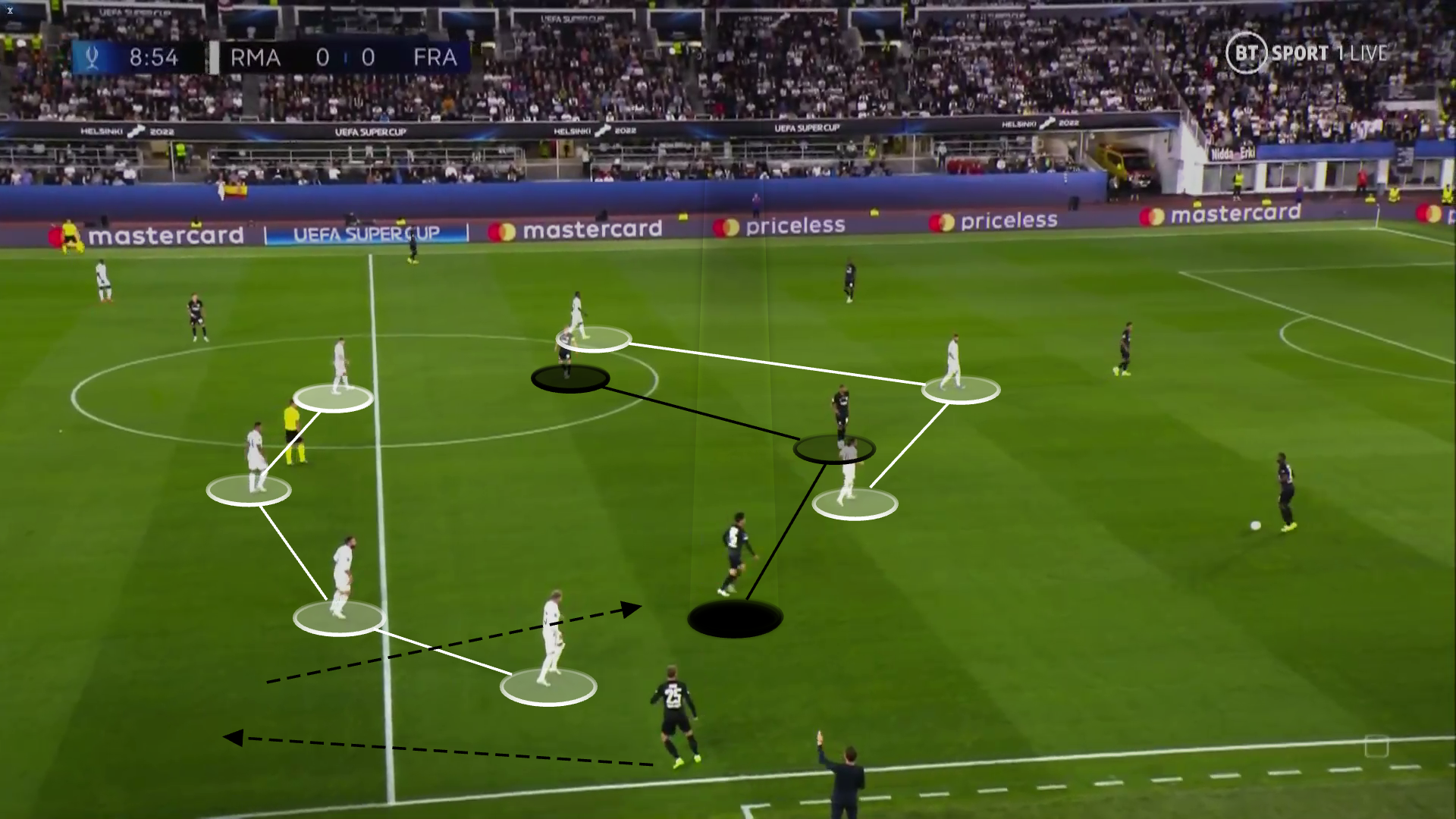 Lindström, on the other hand, moved more towards the front and sometimes played as a second striker. His game intelligence was not used for the distribution of the ball, but for making clever and smart runs and creating space for teammates. Again and again, the Danish full international started runs on the first post. Forward Borre thus had space at the back post. 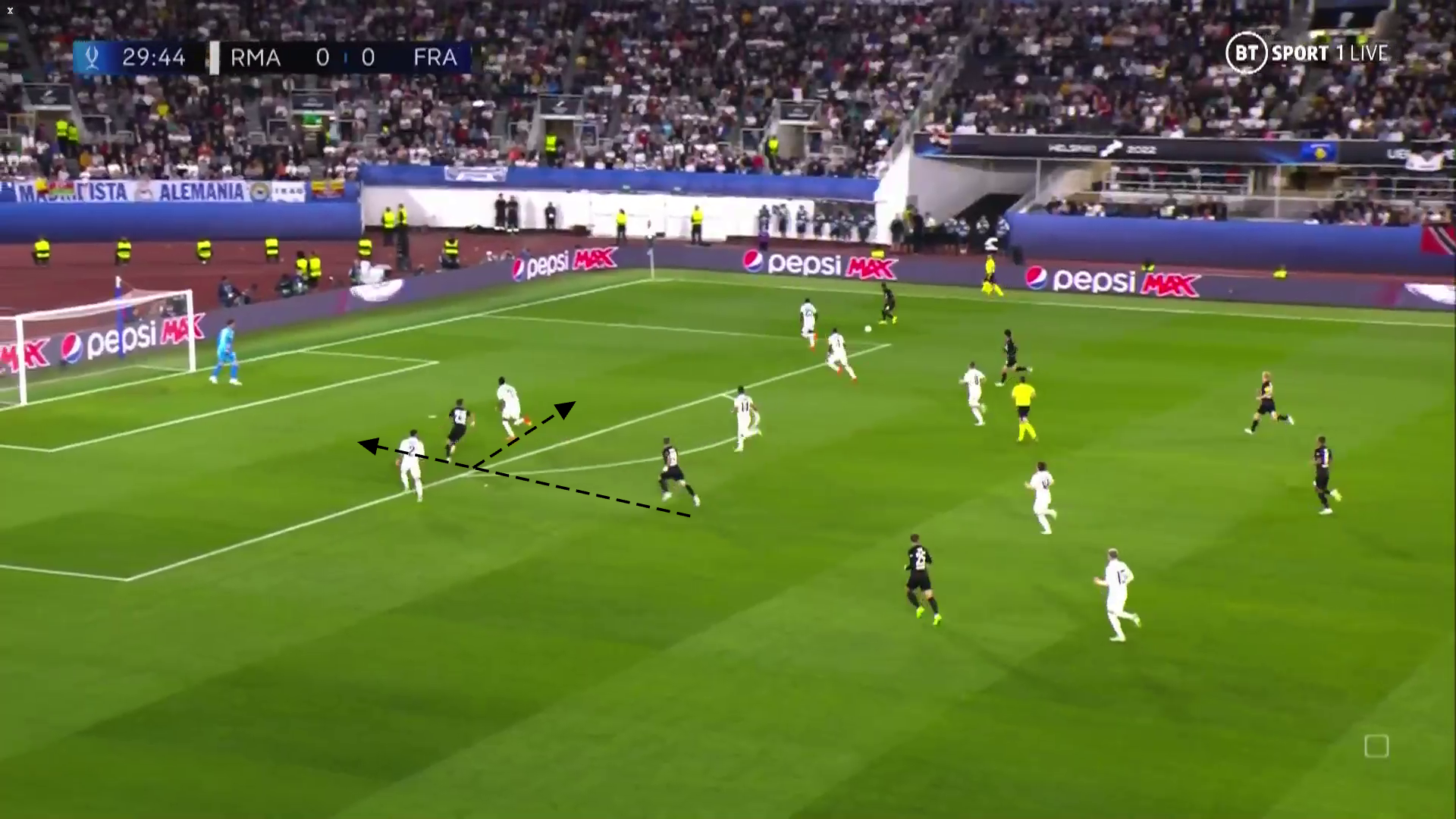 Lindström also sought solutions in the half-spaces with his off-the-ball movement. In the example below, he pulled out from the centre and created the perfect space to receive the ball in. However, Rode did not recognize this. With another intelligent player like Mario Götze in midfield, scenes like this can lead to dangerous chances. 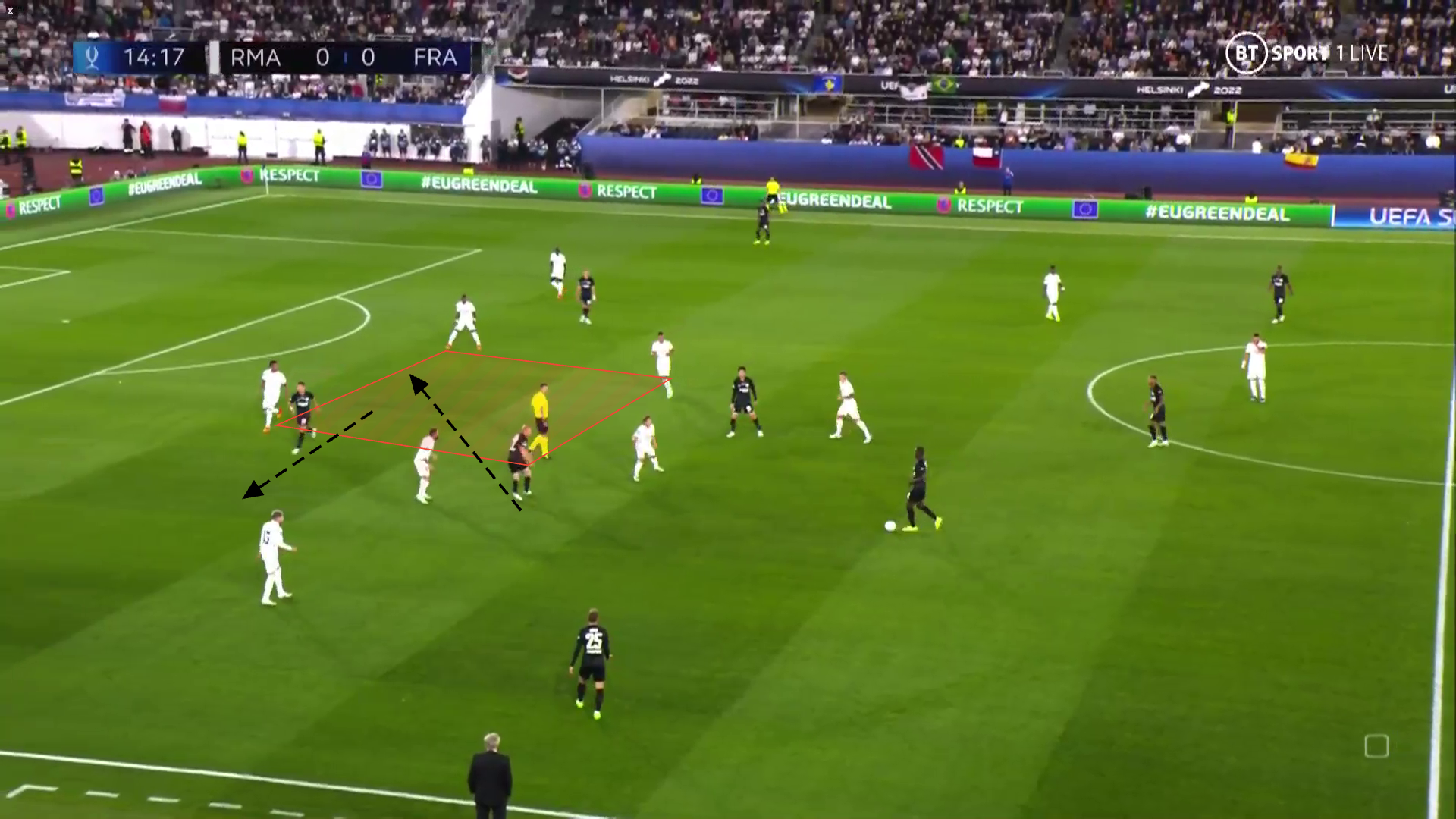 Götze came on during the second half. However, Glasner then switched to a 4-4-2 system that Frankfurt did not play perfectly. It remains to be seen whether Glasner will switch to a back four without Kostic in the future. A 4-2-3-1 system with Lindström, Götze and Kamada in midfield and Borre or Kolo Muani up front could definitely be a good option.

A possible double-pivot could consist of Sebastian Rode and Djibril Sow. Against Real Madrid, both had lots of time and space in the build-up game. They weren’t intensively pressed by Real Madrid. Again and again, Frankfurt was able to play through the middle, put the ball down and then play a pass in behind the opposition’s backline. 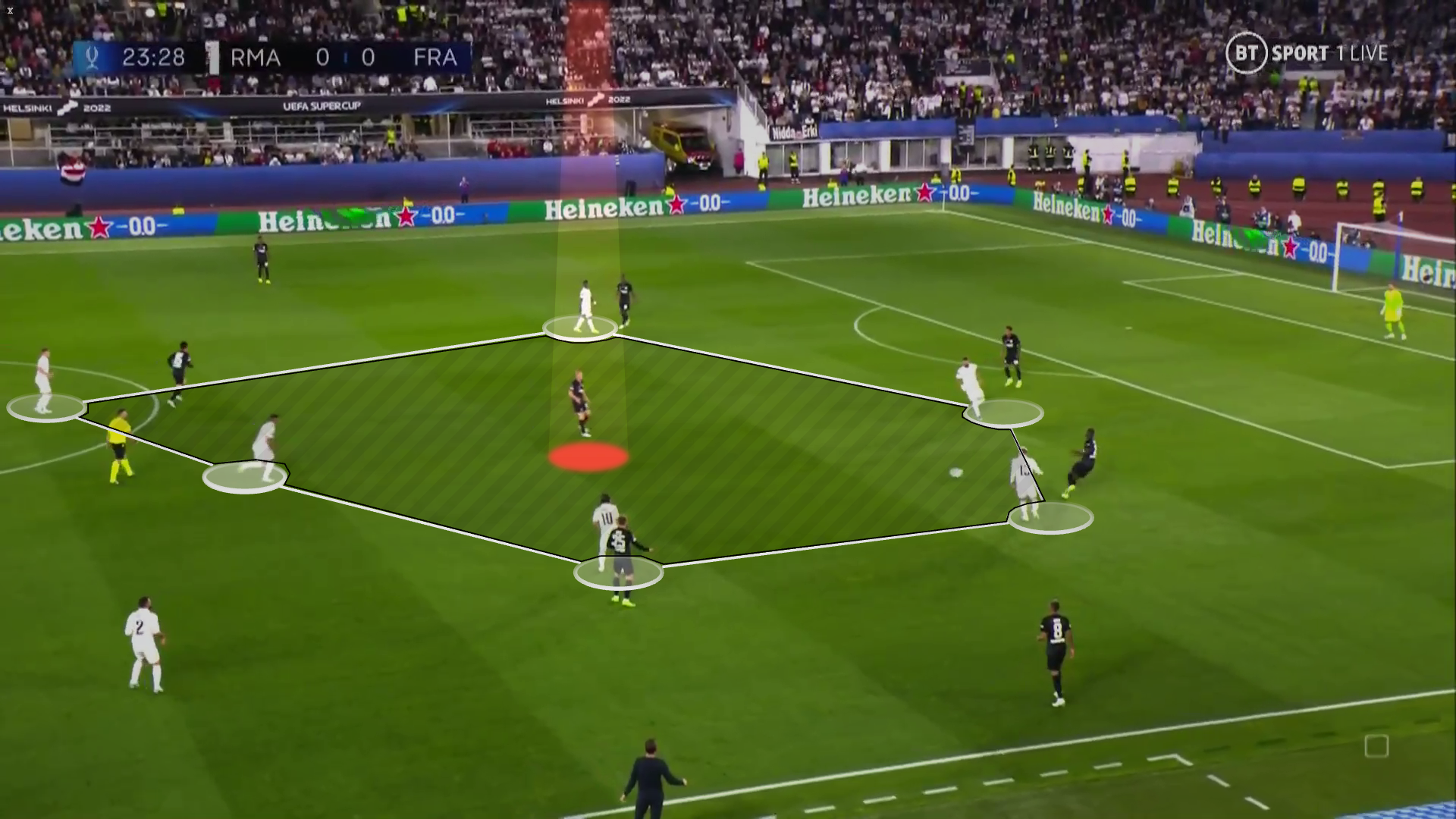 A perfect example of these three paths of play illustrated can be seen in the following situation. Rode receives the ball, and has space and time. Sow and Kamada start running into the gap in midfield between the midfield line and the backline. Lindström drops deep to give the ball to Sow and then, together with Borre, runs in behind the defensive line. 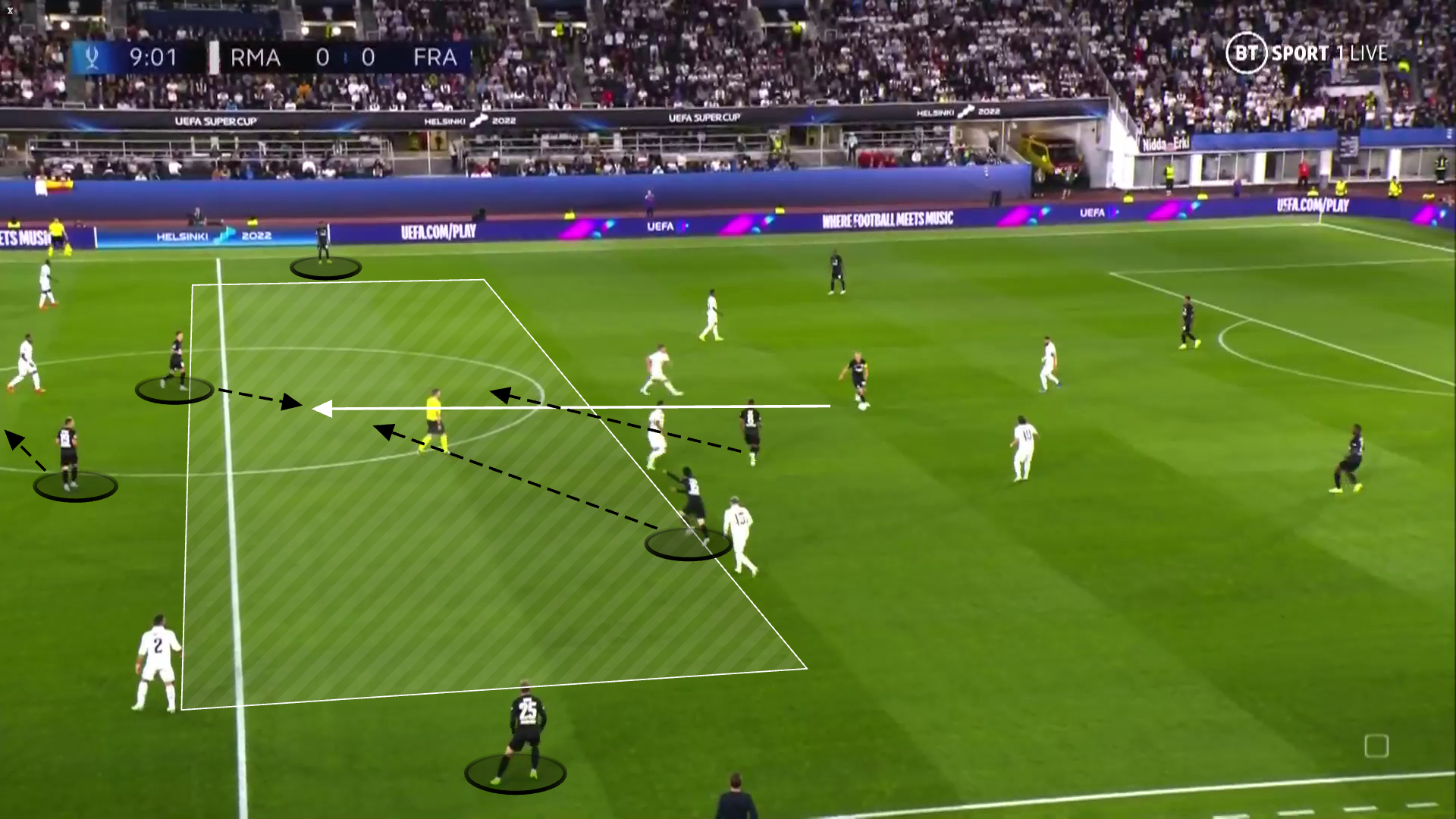 Although Real Madrid controlled the game, it was clear to see that the final was just their first competitive game of the season. Problems in the build-up phase, large gaps and distances between the lines meant that Frankfurt could become dangerous at certain points.

But Glasner’s side did a solid job too. They weren’t able to compensate for Kostic’s absence at such short notice, but they found alternatives. Knauff on the right was very involved in the offensive phases but struggled defensively against Vincius Jr. Meanwhile, Lindström and Kamada showed their creativity and game intelligence. With Mario Götze as another creative player, Eintracht Frankfurt will hopefully be able to have some spectacular performances this season.