This is the second part of a mini-series in which we will use data analysis techniques in order to identify young players who are undervalued in their current leagues. If you want to give the first part, where we concentrated on the Serbian top-flight, then you can find it here.

This time we will be turning our attention to the top-flight of Swiss football as we look to find players who are not necessarily playing for one of the biggest sides in the country. But first, we will give some context around the methods that are used for this piece. The data that we are using is all from Wyscout although as you will see as we work through the recommended players there are some custom metrics that have been built using the base data provided. We also use Python, in order to find the percentile data and code the pizza charts, and Tableau in order to create the visualisation showing the rankings of the players. By using techniques like percentile rankings we are better able to standardise and understand the data that we are working with.

The whole point of these articles is to shine a light on some of the players in these leagues who do not necessarily play for the biggest and strongest sides in their respective countries.  If we just take the data as it comes then there will always be a tendency for that data to be skewed towards the players who are playing for clubs at the top of the table. Instead, we can use calculated fields within tableau to calculate the % that each player has contributed to their team. This starts to highlight the players who may be undervalued as a result of playing for teams who are not performing as well.

For the purposes of this article, we will look to identify three players who may make interesting transfer targets for clubs this coming summer.

As you can see from the ranking above there is a clear outlier in the Swiss league in the 23-year-old Luzern midfielder Filip Ugrinic who has contributed to a staggering 22.07% of his team’s goals so far this season. There is then a drop off to the 20-year-old Senegalese forward Kaly Sene of Grasshoppers.

Using this data point and ranking the players as we have above gives us a snapshot of each player into which we can feed more data that has context to us. We would always, for example, look to have age, minutes played and contract expiry included.

This time the top player on our ranking is the 21-year-old Swiss international Kastrior Imeri of Servette with a contribution of 28.19% to his sides xG. Just below him, however, we see Filip Ugrinic making another appearance.

As you can see at a glance the positional make-up of the ranking table has changed. With goal contributions and expected goal contribution, we tend to see attack-minded players dominate at the top of the ranking When it comes to progressive actions we see a shift to players who are defenders or fullbacks. This is purely a result of the actions we tend to see in different parts of the pitch. Defenders are more likely to progress the ball because they get the ball deep with a little more time while forwards are more likely to contribute to goals.

The top performer this time is the 22-year-old St Gallen midfielder Isaac Schmidt although we have actually picked out another player to look at more in-depth. The 22-year-old Hungarian right-back Bendeguz Bolla is on loan at Grasshoppers from Wolves and he is a player that we have liked for some time now. 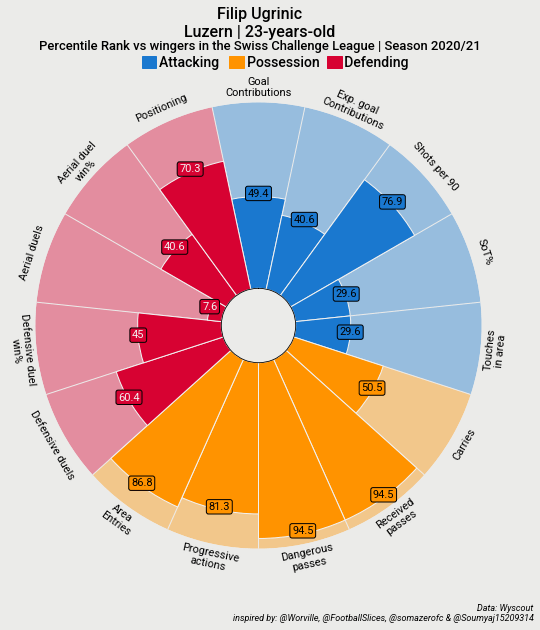 First up we will look at the 23-year-old Luzern midfielder Filip Ugrinic. The pizza chart format allows us to compare key metrics for the player across the defensive, attacking and possession phases of the game. To do this we use percentile data so that the range of each field is always 0-100.

As you can see we continue to use custom metrics in our pizza slices in order to gain as much insight as possible from each player. It is clear that Ugrinic is a creative threat on the ball with strong outputs for area entries, progressive actions and dangerous passes but he also carries a goal threat. 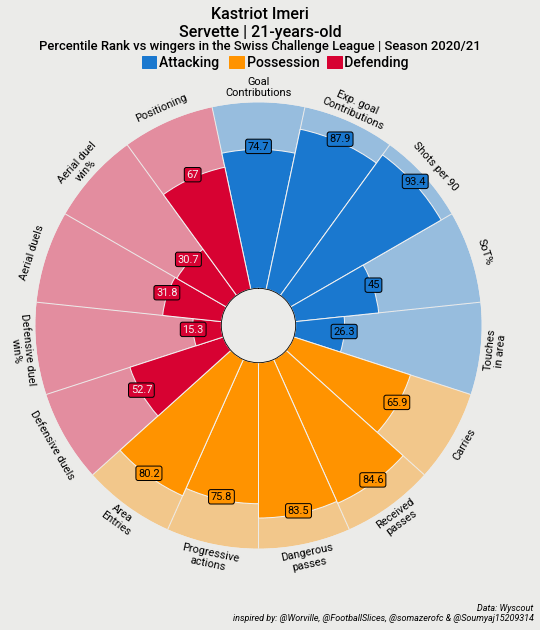 Next up we have Kastriot Imeri of Servette. The 21-year-old has already been capped by Switzerland at international level and it is easy to see why. He is similar in a way to Ugrinic in that his possession metrics are very strong with good outputs for area entires, progressive actions and dangerous passes. 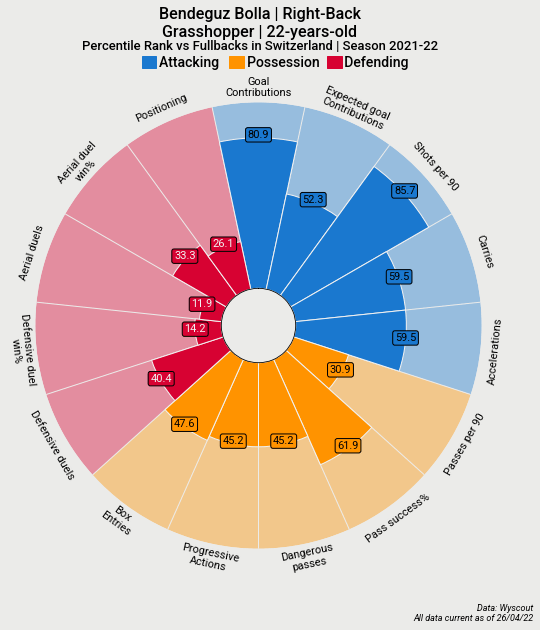 Next, we have the first out and out striker on our list with the 20-year-old Senegal striker Kaly Sene. He is currently on loan at Grasshoppers from Basel.

It is clear that when we are working within football recruitment the ability to build custom metrics and approach player identification from different angles is key to gaining insights into players within our markets. The use of % rankings, percentile rankings, and custom metrics are a few ways that we can look at players and use widely available metrics to build models and profiles that are bespoke and unique to our clubs.