The first UEFA Champions League semi-final of the season was an incredibly exciting battle as Man City took on Real Madrid at the Etihad Stadium. First, Pep Guardiola’s side already beat Real Madrid’s rival, Atlético Madrid in the quarter-final, and it would be another tough battle because their opponents had very good spirits to fight in every UEFA Champions League game. After an intense 90 mins, Man City triumphed with a 4-3 victory and that was a good performance from the home side.

This tactical analysis would specifically investigate how City behaved without the ball, which helped them to recover possession to achieve dominance in the game.

City had some interesting selections despite the injury crisis. John Stones was able to get back to the side and played some minutes as a right-back, so Rúben Dias could partner with Aymeric Laporte in the centre. The midfield trio was formed by Rodrigo Hernández, Kevin De Bruyne, and Bernardo Silva, as İlkay Gündoğan stayed on the bench for 90 minutes. With the good performance against Watford, Gabriel Jesus won the chance to start as the striker again and he did not let anyone down.

Carlo Ancelotti also made an interesting decision as he placed Casemiro on the bench initially, so Toni Kroos filled in as the 6 with Federico Valverde and Luka Modrić as the 8. Also, he wanted to inject more pace and runs in behind with Rodrygo taking the right-winger position, so the team might have pushed City back in the transitions but that barely worked.

Why Madrid are difficult to defend against

Madrid, as the La Liga champions, were a very strong side and they always played well in the big games, they worked hard enough to be in the semi-final. The first section of the analysis will explain a bit why Madrid were a tough side to defend against in terms of tactics. 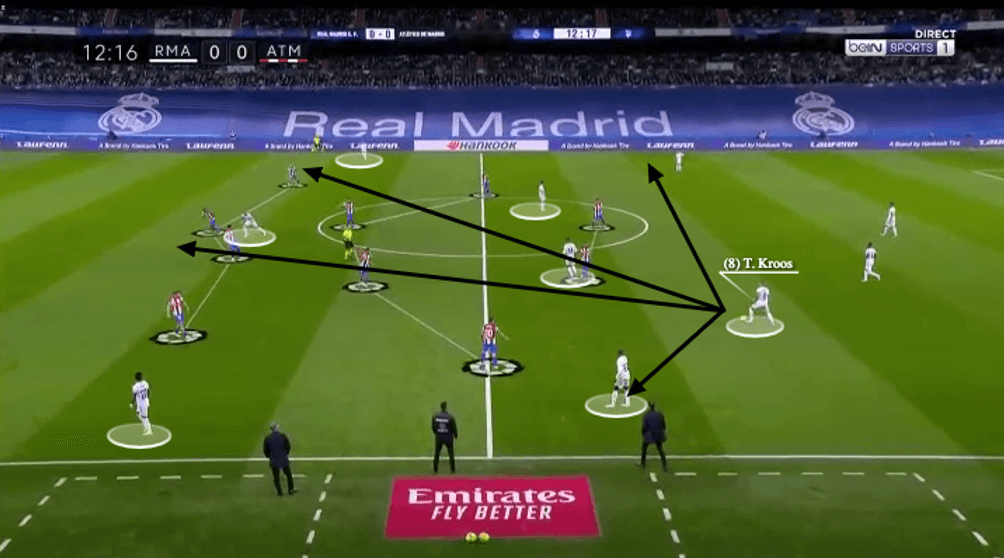 The reason, is usually that Ancelotti was not a very “positional” head coach, he did not have to give very strict and detailed instructions to his players as his troop were the most talented group in the world. Instead, he believed that more freedom should be given to the players so they could do whatever they want.

Tactically, Kroos and Modrić’s positions in the construction part were very tricky, as we saw Kroos receiving against Atlético in a deep position. It was a false impression that these players were not a threat if they received outside of the formation, because that was usually how coaches perceive the situation. However, in Madrid’s context, Kroos playing in deep was also a threat since the German international had an exceptional passing range to connect teammates in all parts of the pitch, which made the team defenseless as we have shown above. Once Kroos sent a good ball out, the likes of Karim Benzema and Vinícius Júnior would be able to work their magic to attack the opposition’s last line. 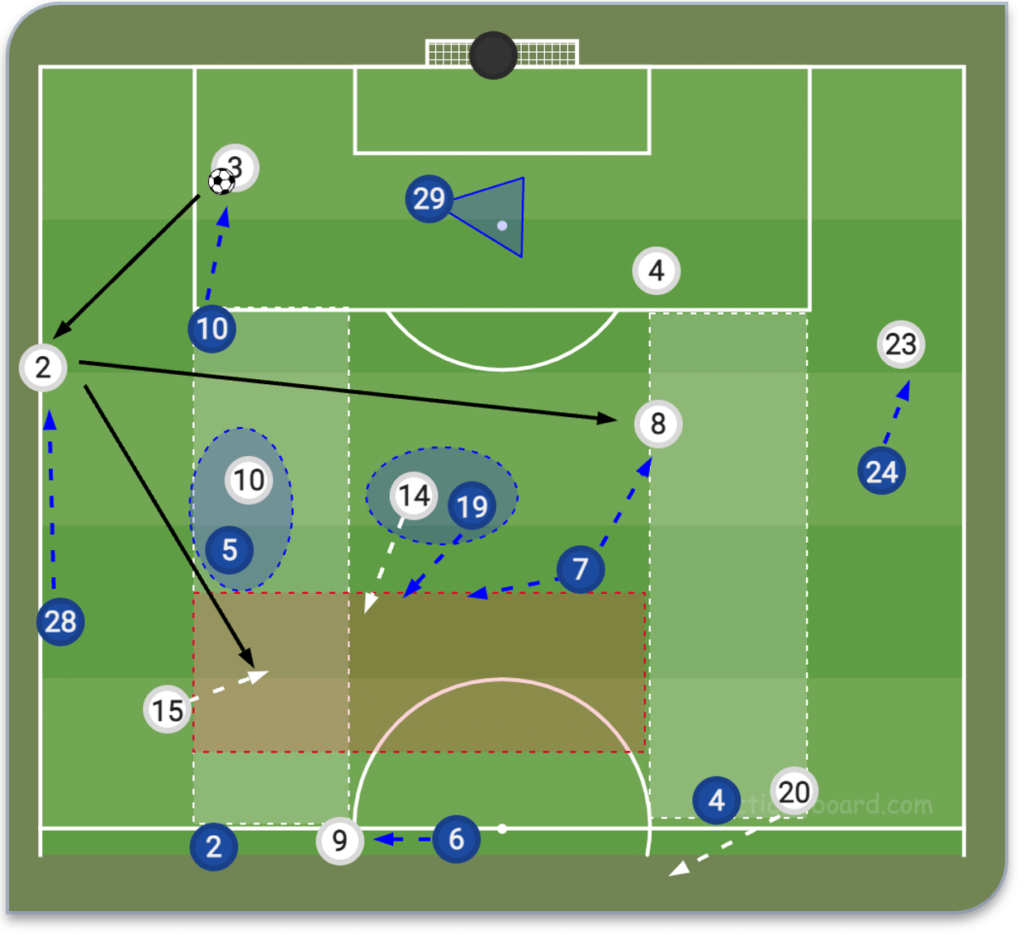 Another brief recap was how Chelsea were outplayed by Madrid’s build-up back in the quarter-final first leg. The difficult part was that Thomas Tuchel’s side pressed in a 5-2-1-2 or 5-1-2-2, which they could not balance between covering the ball side or closing the midfield options of Madrid well.

As shown in the above image, when the ball was on the right side, Chelsea could not close them down with enough pressure on the ball, then, their far side 8 (N’Golo Kanté) struggled to choose between covering the midfield line (Jorginho and Mason Mount) and going tighter on Kroos. As a result, Madrid always chose the opposite decision with references to Kanté’s action, if the Frenchman midfielder dropped back, they went to Kroos in the centre and that created a goal. Or, they simply put the ball behind Jorginho if Kanté oriented himself towards Kroos.

City pressed with a smart structure

Guardiola must have seen that situation before the game, and he knew that it was difficult to keep Madrid quiet if they let the likes of Kroos and Modrić received the ball. Therefore, City came up with a smart plan today with the players running tirelessly to make sure Madrid could not find their rhythm in the build-up. 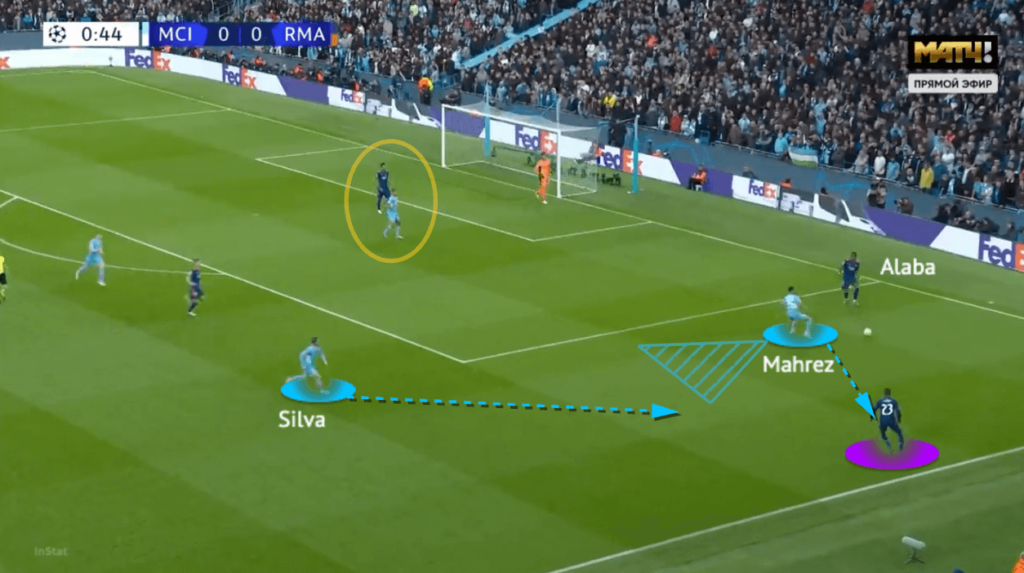 City mostly were in a 4-4-2 shape with De Bruyne joining Jesus as the first line, these two players would be responsible for the centre-backs and the 6. As we circled above, Jesus closed Éder Militão in the above scenario.

When the Madrid centre-backs split really wide to receive, the wingers could step up to press but they must close the half-space passing channel with body orientation first as shown here. Then, if the ball went to the wide space, the City 6 (Bernardo Silva) was also given the license to close that option down. So that City could keep the pressure on the opponent and force them to play. 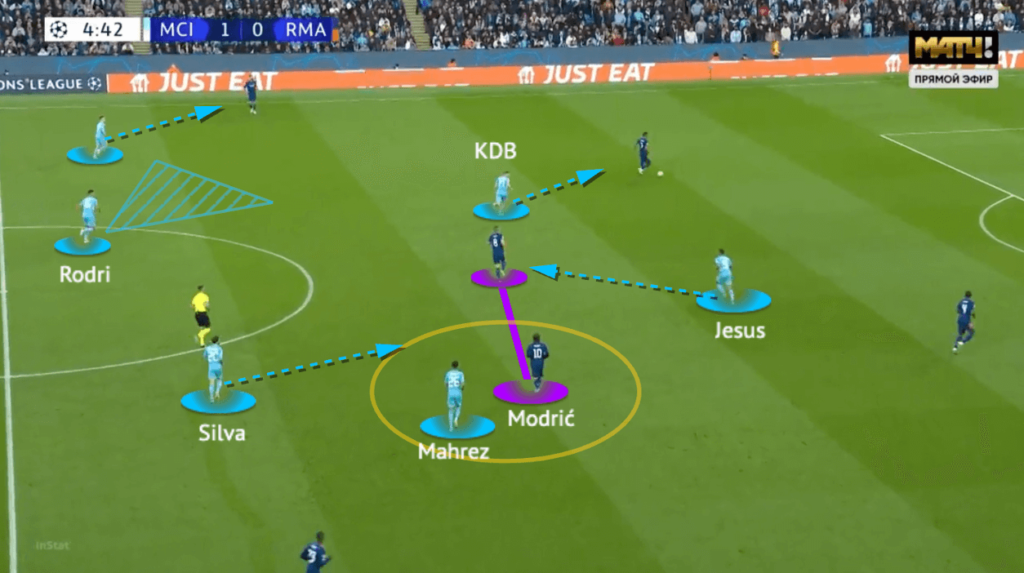 The second image of the section showed City’s defence was about “pressing & cover”. In the 4-4-2, when one of the strikers stepped up to press centre-back, the other should drop back a bit to cover the 6 as the relation is demonstrated by Jesus and De Bruyne here. City could afford David Alaba on the ball given that all options around the former Bayern Munich defenders were marked, the Madrid centre-back could not simply carry the ball from his third to the City half.

Meanwhile, the winger on the far side should also be alert and position himself inner to keep the shape compact. Here, City had Riyad Mahrez and Silva closing Modrić simultaneously, as another priority of City’s defence was to make sure Modrić could not receive freely between the lines. On the ball side, the winger (Phil Foden) could be aggressive and jump out to press the full-back diagonally, so regardless of how Madrid were passing the ball, the player receiving would instantly confront a blue shirt except for Thibaut Courtois. 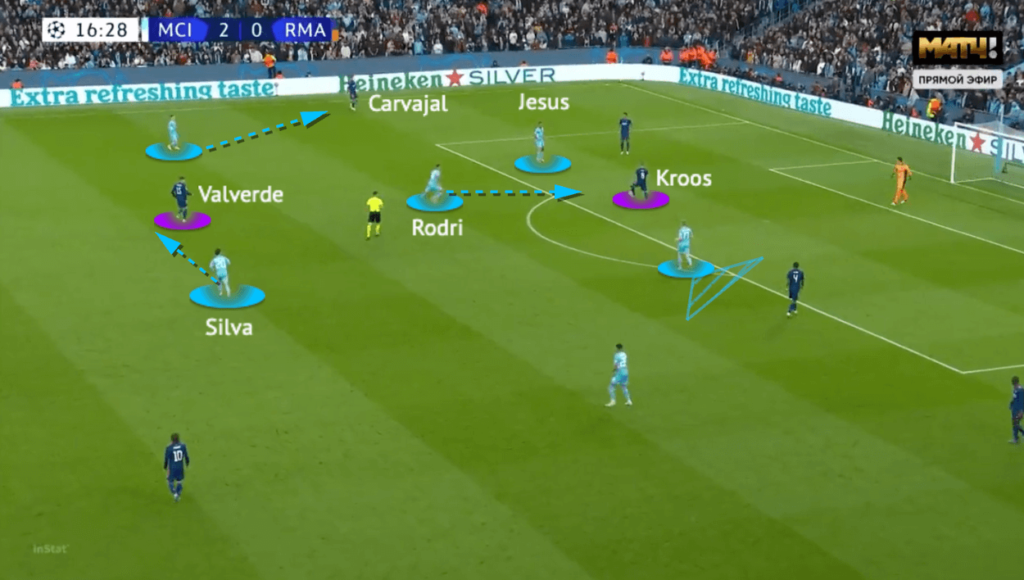 Sometimes the City strikers were a bit oriented to the centre-backs, or being split by them because Alaba and Militão could hold a wide position. Also, it might become tricky when Kroos dropped out to receive in the first line, as many teams were reluctant to press the German international in such a case.

But City’s pressing were very different in this game. Pep knew that he could not afford to let Kroos to play, because he could be the conductor of Madrid’s attack with his good passes to break lines. Therefore, whenever Kroos received and the strikers were unable to press, a City midfielder would jump out to press Kroos as Rodri did above, given that Jesus and De Bruyne were covering the centre-backs with their body angles. Meanwhile, Foden was very ready to catch Dani Carvajal if the pass went outside.

It does not mean that City were drawn out easily, because the midfield balance during the press was maintained by the 6’s alternative positions, as Silva and Rodri must always see each other’s movements and decisions so that one of them could go deeper to cover as Silva’s move demonstrated above. 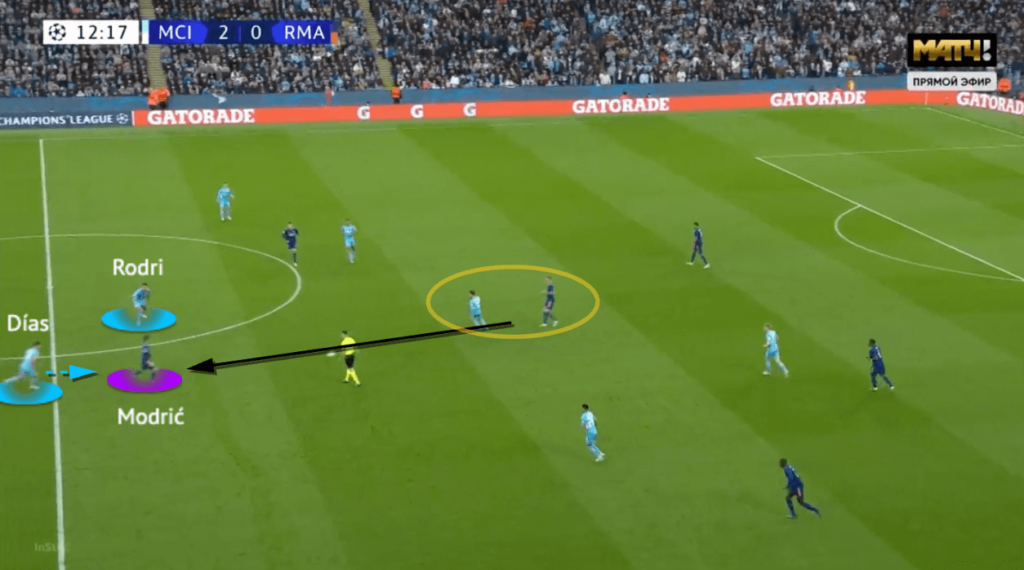 Below was a variant of the explained concept, as Jesus and De Bruyne were unable to press and close Kroos, Silva stepped up to press the German international. But he was a little bit late so Kroos found his angle to play the forward pass, and Modrić was waiting for that between the lines.

However, with the concerted efforts of Dias and Rodri, Modrić could not receive easily because he confronted pressure from two angles, and once again you could see Rodri’s position was very good, as he was deeper in another horizontal zone to cover Silva. 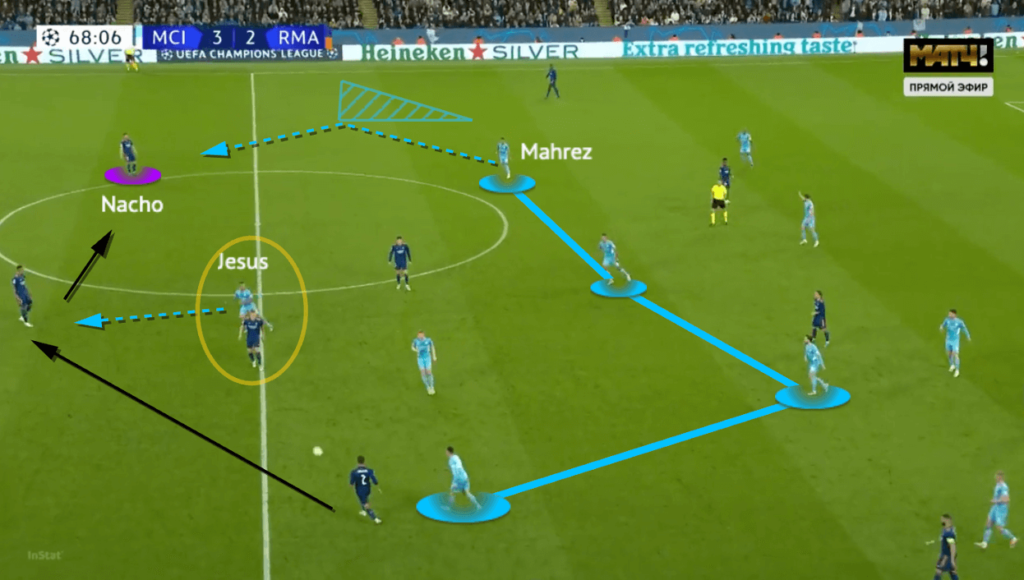 In the midblock, City were also cautious as they wanted to keep Madrid on one side. They roughly hold that 4-4-2 shape but the way of wingers engaged the defence was different. As mentioned, it was more about a straight diagonal run to press with intensity in the high pressing, but in the midblock, it was more about a curved run to cover the outside.

Here, City invited Madrid to go back to the centre-backs from Carvajal, as Jesus closed Kroos in the centre. Then, Jesus could continue to press with Kroos staying under his shadow, further forcing Militão to go lateral to his partner. But City did not want to stop there because it was never ideal. Hence, Mahrez continued the press but adjusted the angle with a curved run from the outside.

If Kroos got away…

In fact, we also wanted to say that Kroos’ incredible contribution when Madrid was in possession was not an exaggeration. He would pose a real threat. City did enough to close Kroos in 44 mins out of the first 45, but in the remaining one minute at the 34’, Kroos managed to free himself to play an exceptional diagonal switch which tore City defence apart, it became a significant final third entry for Madrid. This was the class and impact of world-class players, only one occasion, they could do something spectacular. 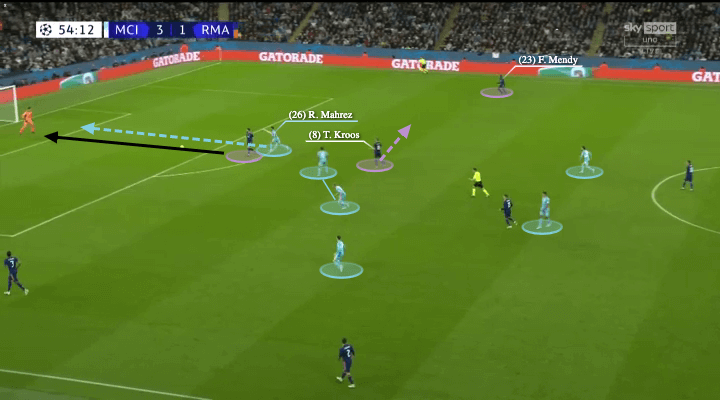 There were so many reasons behind the Vinícius goal, Fernandinho might have done a better job, but it was also an occasion in which City got the pressing a bit wrongly, because that was not from an open play. Instead, the Madrid attack came from a throw-in and City switched off.

Here, when Mahrez pressed the goalkeeper all the way after the centre-backs went back, Kroos was moving between the lines with Ferland Mendy on the other side as well. 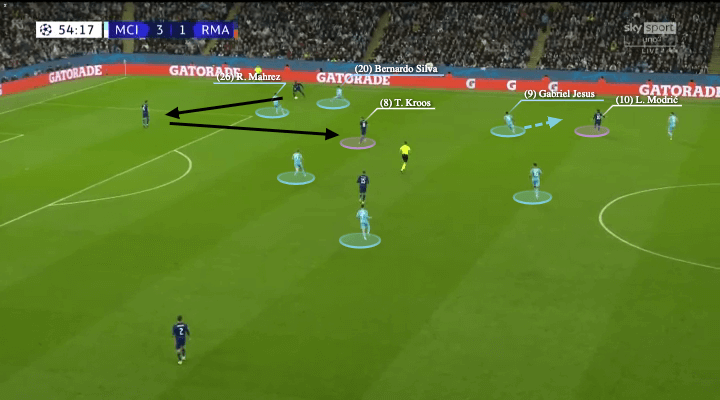 Then, the tricky part was that when Silva came out to close Mendy, City players were not shifting onto each other’s roles effectively as Jesus dropped back to close Modrić, that was not wrong for the Brazilian because that was one of the priorities as we have explained.

But it was also difficult to stop Madrid from circulating the ball in the backline when enough depth was created. Here, Mahrez intended to close the passing channel to Kroos, but then he could not access Nacho Fernández on time. 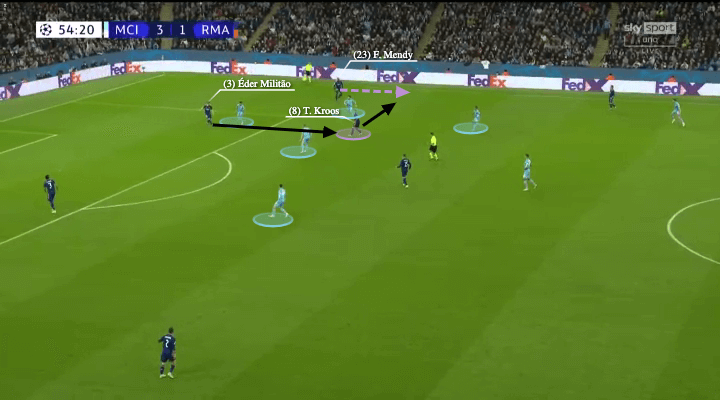 And, Madrid showed why they were a top team because the players were able to keep composure in tight spaces. Here, Kroos, despite the pressure of Silva, still managed to reach Mendy in the wide spaces. With this sequence of passes, alongside Kroos’ good position, movements, and quick passing to help Madrid move the ball, they were able to get out from the press and this became a favourable condition to attack City’s high line, resulting in the goal.

With the ball, City successfully targeted the isolated 6 of Madrid, especially when that was Kroos, who lacked the defensive coverage and intensity to protect the backline. Even though Ancelotti played Valverde to inject energy in the midfield three, that was far from being enough. The Italian head coach would have a headache on choosing between Casemiro or Kroos to play in this position in the second leg, as they could not balance attacking and defending with the midfield combinations they had.

As shown in this analysis would never be easy against Madrid. Although many said City should have scored one or two more to “kill the tie”, however, we do not believe that situation exists on a big platform like this. Teams would not easily give up if they have reached this stage, the tie would never end until the final whistle was blown, as Barcelona and PSG’s stories already told us teams could also go out despite leading 3-0 or even 4-0 in the first leg. There was no easy game for City and all they need was to keep a high standard of performance away from home next week, regardless of the result. 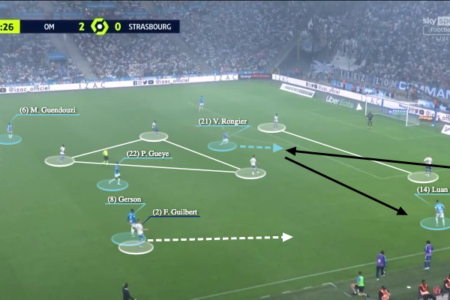 The final day of Ligue 1 2021/22 was very exciting. Even though PSG claimed the title very early, the second […] 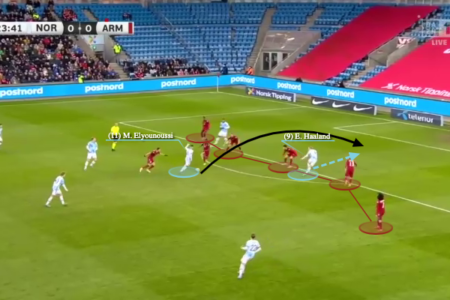 As early as May, two of the most eye-catching players already settled on their destination for the 2022/23 season. Kylian […]