The first 2021/22 FA Cup semi-final was played on Saturday – the two best teams in the world, Man City and Liverpool meeting again after playing against each other in the Premier League one week ago.

However, this was not even a close tie as Pep Guardiola’s side lost the game already within the first half – it was a very disappointing performance from the Citizens. By contrast, Jürgen Klopp was able to correct himself based on the information from previous clashes and his Liverpool looked better not only better mentally and physically, but also tactically.

This tactical analysis will illustrate how Klopp adapted the pressing to give Man City a very hard time.

Guardiola himself said some players would not be playing because of fitness, the likes of Rodrigo Hernández and Aymeric Laporte had too many minutes this season, they needed to be rested, while he also wanted Kevin De Bruyne to be ready for future games, so he did not take the risk to play him in this game. But it was still a very strong team, including Raheem Sterling, Jack Grealish, and Gabriel Jesus, who did not start in the away game against Atlético Madrid.

Liverpool was able to rest some key players in the second leg of the UEFA Champions League quarter-final, and Klopp also had some interesting selections in this game, such as partnering Ibrahima Konaté with Virgil van Dijk and keeping Joël Matip on the bench. In the midfield, the trio was formed by Fabinho, Naby Keïta, and Thiago Alcântara, as the skipper Jordan Henderson did not start. Since neither Diogo Jota nor Roberto Firmino was very fit, they chose Sadio Mané as the striker, and Luis Díaz was given a chance to start as a left-winger.

Every game between Klopp and Guardiola must begin with the analysis from previous clashes, the decisions and approaches of these best coaches were more or less based on the legacy and information they’ve got, so they were always solving issues and posing new questions to each other, that’s why these battles were epical and Klopp gained an upper hand in this game. 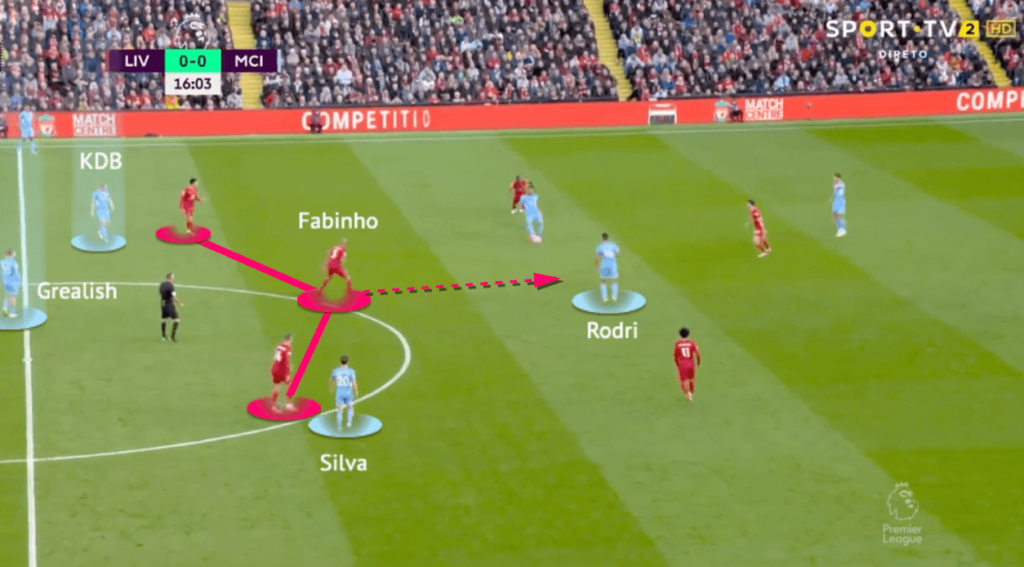 In the last two Premier League games with City, Liverpool suffered a lot despite the result remaining 2-2, Pep’s side was able to create many chances throughout both games because their positional tactics were superior to the opponents. The main problem for Liverpool, was the position of Fabinho in the pressing, should he come out to close Rodri or stay in position?

The first image was from the Anfield battle, as Pep put Grealish as the “false-9” in that game, so whenever Fabinho came out to press, the Citizens would have a player behind to receive between the lines. Grealish’s presence would also give City a “+1” advantage in the centre against Liverpool’s midfield three, as they could use Bernardo Silva and De Bruyne to stretch the second line, opening spaces for Grealish. That was Liverpool’s main issue in their 4-3-3, even Klopp himself admitted they could not close that space behind Fabinho well in the post-match interview. 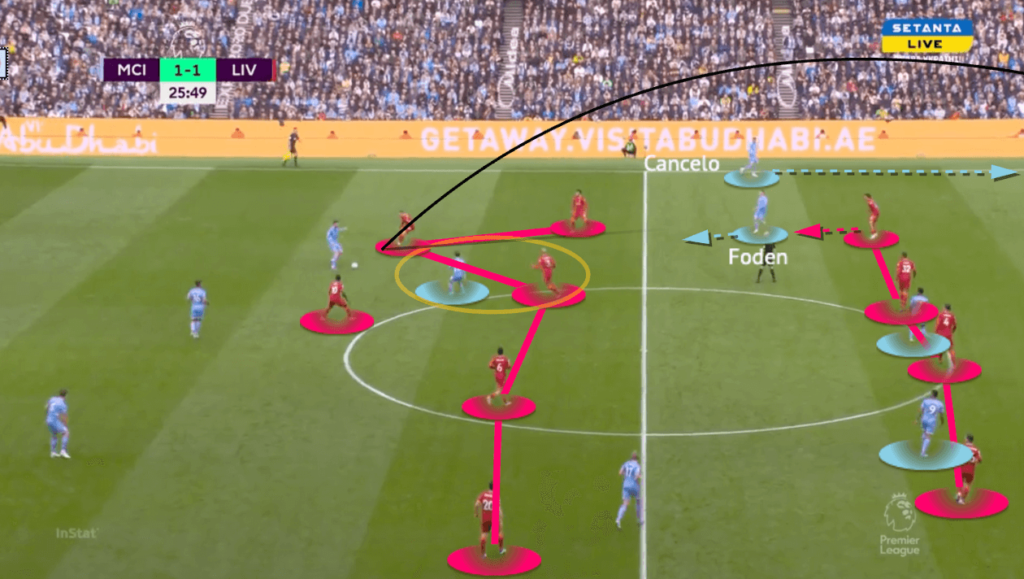 In the clash one week ago, probably most would agree that City was the better side because of the number of chances they created was more than the opponent. In that game, Pep’s approach was slightly more direct with more runs in behind. However, the core idea was the same because they wanted Fabinho to come out, so it looked like more of a 4-5-1 and City could also catch the rebound or second balls if the initial crossing was cleared by defenders.

In the above screenshot, you could see how Liverpool struggled, not only because of the winger doubled up the opposition full-backs with their full-backs, but also because Fabinho was drawn very high. The low positions of wingers also allowed City defenders very easily to play the passes forward because there was not much pressure on the ball. One good pass behind and Liverpool would suffer.

But Klopp is one of the best coaches in the world, if not the best, he would not let the same issue happen again and again, and we saw a very good solution from his Reds in the FA Cup. 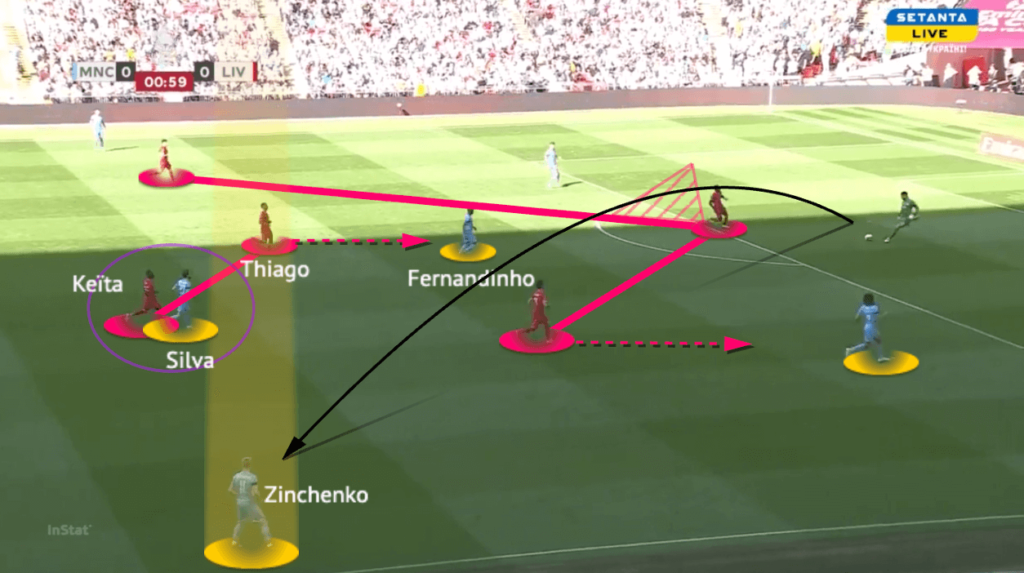 Klopp managed to find his solution to handle the two midfielders of City, he knew Silva would always play deep to help the 6 so there were two options in the centre to overload the striker. If Fabinho wanted to come out to catch them, City could play between the lines as we have shown above.

Therefore, in this game, Liverpool used Thiago to press Fernandinho and Keïta to cover the zones behind Mohamed Salah, so Mané could be fearless to go high and lead the press. Meanwhile, Salah should control the half-space to close that diagonal passing lane and close Nathan Aké if the ball was played to the centre-back. With this system, Liverpool could defend in a 4-1-2-3 or 4-1-4-1 with Fabinho in front of the last line to cover spaces, retrieving the second balls. 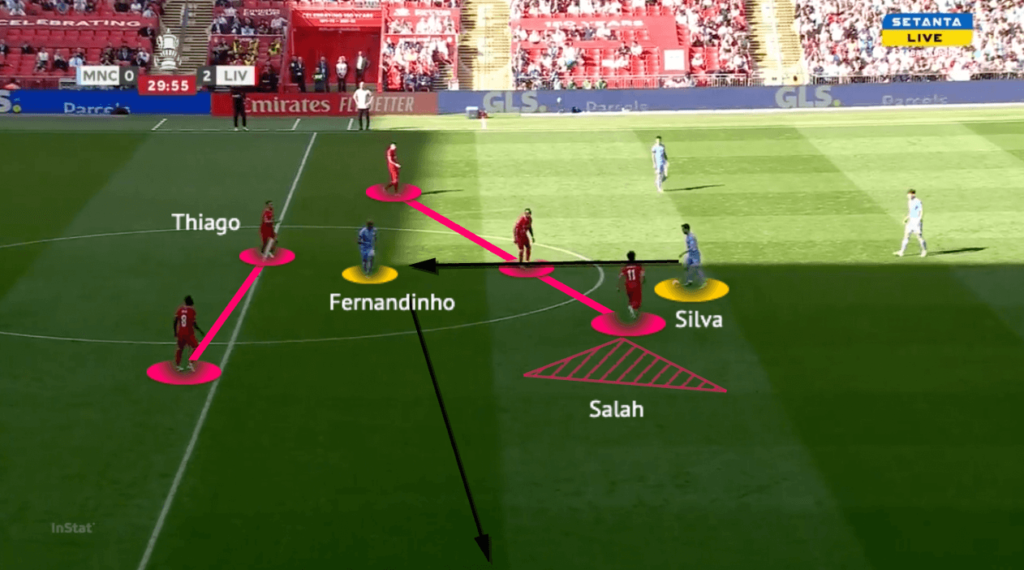 In the above image, Liverpool was more in a midblock but you could see the same system worked well here. City tried to disguise the opponent with Fernandinho between the lines, Silva dropping deep to play. The Reds reacted well because that change of position did not draw Fabinho out, Liverpool remained very compact in the centre and there was pressure on the ball, as we saw Salah blocking the diagonal angle of Silva and Thiago closing on Fernandinho’s blindside. City could escape with one-touch passes but they were unable to further progress in such a case.

Liverpool’s intensity is back!

In the Premier League clashes, Liverpool looked a bit conservative in terms of their pressing approach, as they wanted to stay in shape rather than coming out to press the opponent, but that also resulted in some periods which City dominated the game. This game was very different because Klopp instructed his troops to press high with intensity and good strategies, City had a very hard time.

From Wyscout’s stats, Liverpool’s PPDA was 9.36, the highest in three games given the other two Premier League games with City only recording the PPDA at 19.77 and 13.85. That was a fair reflection of Klopp’s aggressive Liverpool at the Wembley Stadium. 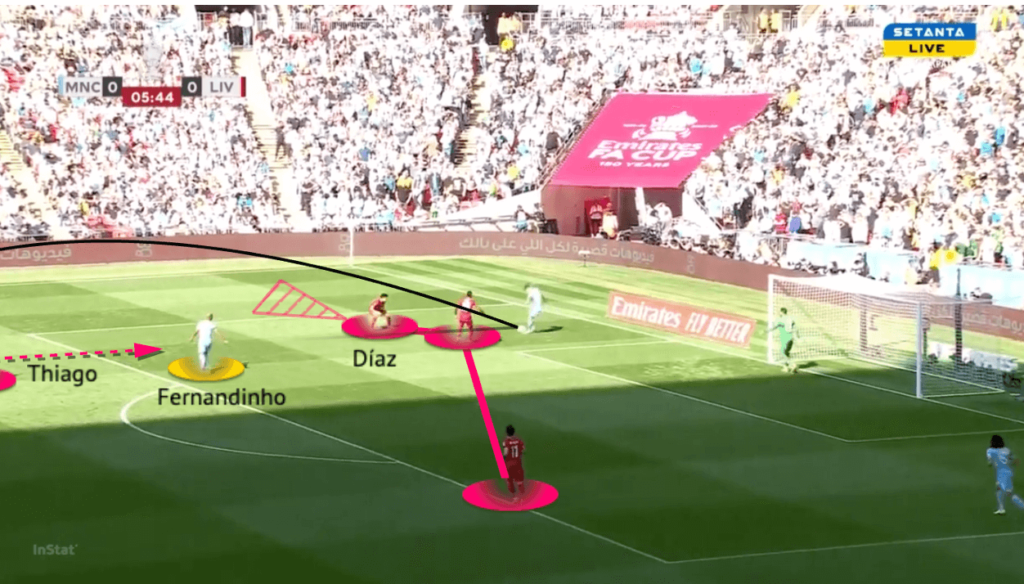 First of all, the high pressing was back and Liverpool cleverly set some tactics to force City to play on the weaker side, not sure if it was all decided before the game but they tried very well to prevent João Cancelo from receiving the ball, it was very important because he was the best player at City.

We could always see Salah and Mané leading the press very high, while Díaz’s role was more cautious because he should use his body angle to block the way to Cancelo above. Mané was always going for the centre-back to make sure they are under pressure, and this also disrupted City’s build-up rhythm.

As mentioned, if Mané pressed the centre-backs, Thiago should be ready to press Fernandinho so the Reds could keep Fabinho in position. 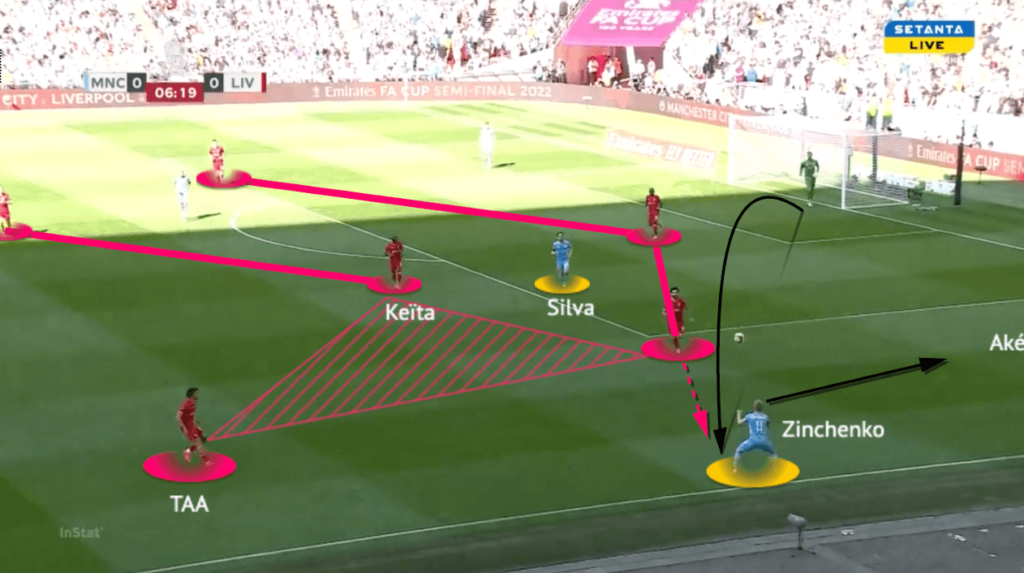 Another problem of City’s selection of left-back, Kyle Walker was unavailable in the game and that became a big problem. For many reasons, Oleksandr Zinchenko was totally out of shape as he was far from the standard required, many City attacks were “dead” when the ball went to his feet and they could not break the Liverpool press on this side.

Since Salah was mostly in the half-space, Zack Steffen used a lot of diagonal lofted passes to find the left-back who had most spaces to play as a result of Salah’s position, that was also very natural for a right-footed keeper as well.

But then, the problem was Zinchenko’s first or second touch did not move the ball into spaces in front, sometimes he needed to chest the ball down and sometimes he needed corrections,  which he was not agile to grasp the moment of the pass or being aggressive enough to drive forward, then Liverpool come back and close them down as shown in the above image. 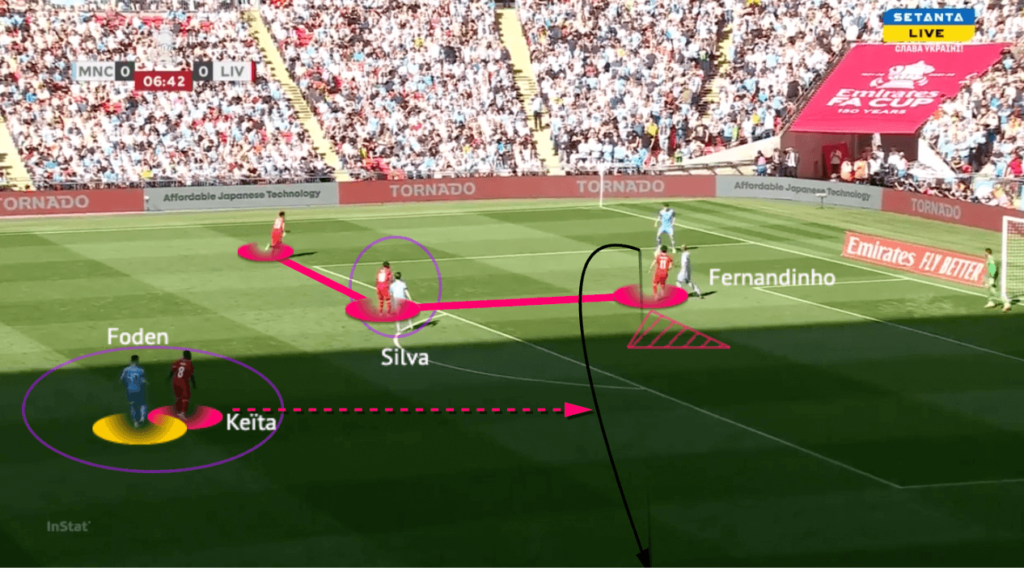 Another reason was the lofted ball might not be comfortably played because Liverpool’s first line gave them so much pressure in the build-up, even as good as John Stones made a mistake early on. Here, the above image had Salah closing them down and Liverpool’s front three was always in a compact shape, with the help of body orientation, it was so hard for City to play short passes because the presented angle was too narrow.

Liverpool also managed to close the City 6s without Thiago going high, as Salah could collaborate with Mané to make sure Fernandinho and Silva were marked. In the meantime, Keïta would be there to control that half-space and close anybody who dropped in, Phil Foden this time. Of course, the way Liverpool pressed with Salah exposed spaces on the left, but the lofted switch was poorly executed because of pressure, allowing Keïta to intercept the ball very close to the City box. 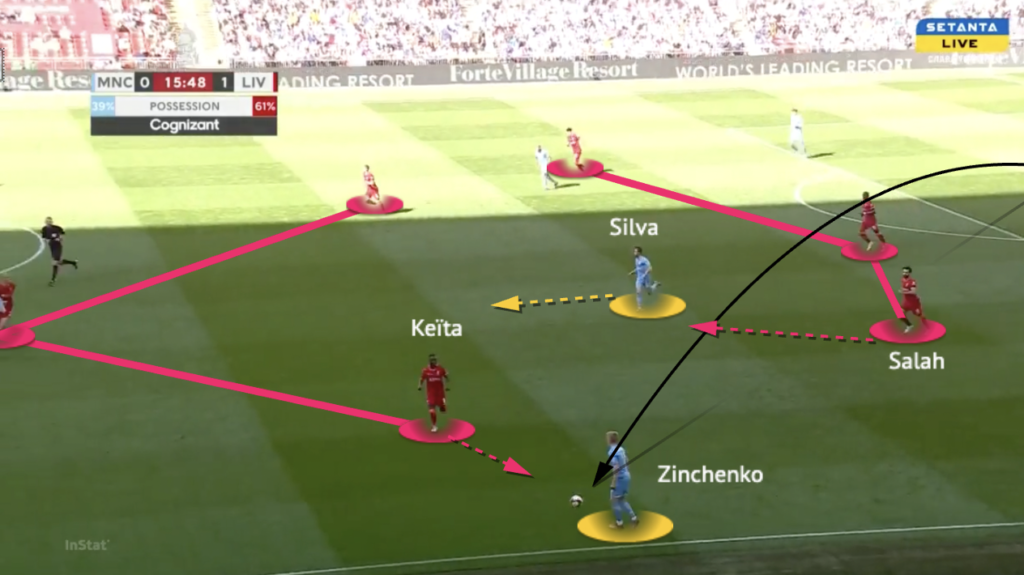 Another issue of City compared to the previous games, was that Zinchenko and Cancelo were totally different players in the left-back position. The Portuguese international was extremely skilful and strong technically and could have many solutions in his toolbox to solve the press, but Zinchenko was not as dynamic as his fellow.

For example, when Steffen broke the first line to find Zinchenko on the above occasion, there was one moment to make a lateral pass to use that 2v1 on Keïta with Silva. Although the angle was presented, Zinchenko did not take it, and very soon Salah, who was on Aké initially, came back to close that option. 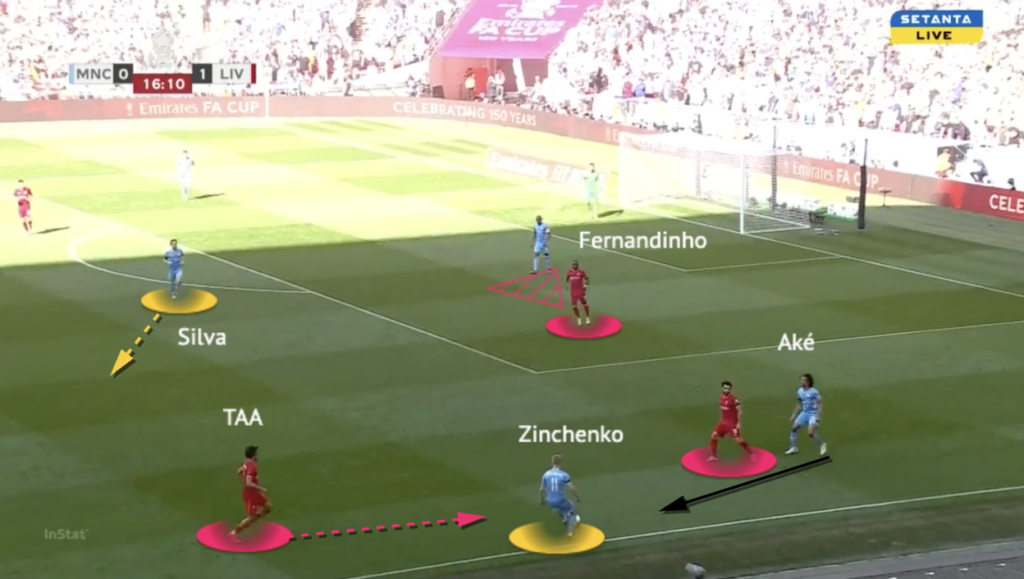 And the body orientation, with other small details, was also very different. When Zinchenko received with Trent Alexander-Arnold pressing on the back foot, he did not really have the angle to pass as we have shown in the above image. There were not many options given Mané closed Fernandnho and Salah closed Aké, the free player would be Silva, and it was much easier if that was Cancelo’s right foot, where he had the angle to go inside or even take the opposition on, but it was Zinchenko and he was not natural to make that pass, so City once again was in trouble in such a case.

As Pep himself said, if he could go again, it is still these eleven players given the condition and tight schedule affected the fitness and selections. However, he might have wanted to choose other tactics to approach the game given some parts in the build-up collapsed against Liverpool’s press. But there was no time machine and there was no way back, all Man City could do is to focus on the next game, Brighton on Wednesday.