Crystal Palace have defied expectations this season. In their pre-season predictions, many pundits and fans doomed Patrick Vieira’s side to a relegation battle. However, The Eagles sit 14th in the Premier League after taking victories against two of Vieira’s former teams in Manchester City and Arsenal. Standout players like Conor Gallagher and Marc Guehi have been great additions to Crystal Palace, who let go of 11 players for free in the summer transfer window.

What may be most interesting about Crystal Palace is their attacking brand. Despite scoring the 9th-most goals in the Premier League this season, Palace have created the 2nd-least shots so far.

This scout report will use tactical analysis to look into how Crystal Palace have implemented their tactics to become one of the most efficient sides, for chance creation, in the Premier League. We will also look at data to understand how Crystal Palace operate with the ball.

To clarify, Crystal Palace are great at producing high-quality chances.

Their creation of chances helps with their shot on target percentage. Only Tottenham (41.1%), Manchester City (39.3%) and Liverpool (38.7%) have a higher rate of their shots troubling the goalkeeper than Palace (38.2). Palace also comes fourth in the Premier League team’s ‘shots to create one xG’ table, with 7.6 shots required to create one expected goal.

So, despite Vieira’s men creating few chances, they shot inside the box more often than every other team in the Premier League. But why have they created so few shots?

Despite finishing games with an average of 50.4% possession, Crystal Palace like a long pass. Specifically, Joachim Anderson is Palace’s main threat from deep. Anderson has completed more long passes than any other outfield player in the Premier League and the 5th most in general.

Anderson is given the ball from kickoffs, and then he plays a long ball forward. For example, against Newcastle United, Chelsea and Leeds United, Anderson collects the ball straight away and passes the ball long. Other football teams do this, such as Liverpool.

From open-play, Palace also like to use the long pass. For example, against Arsenal, Anderson caresses the ball into Jordan Ayew. The Ghanian forward likes to make darting runs inside from wide positions, and it worked exceptionally well in this scenario. The key to this goal was Ayew’s understanding of what Anderson was thinking. 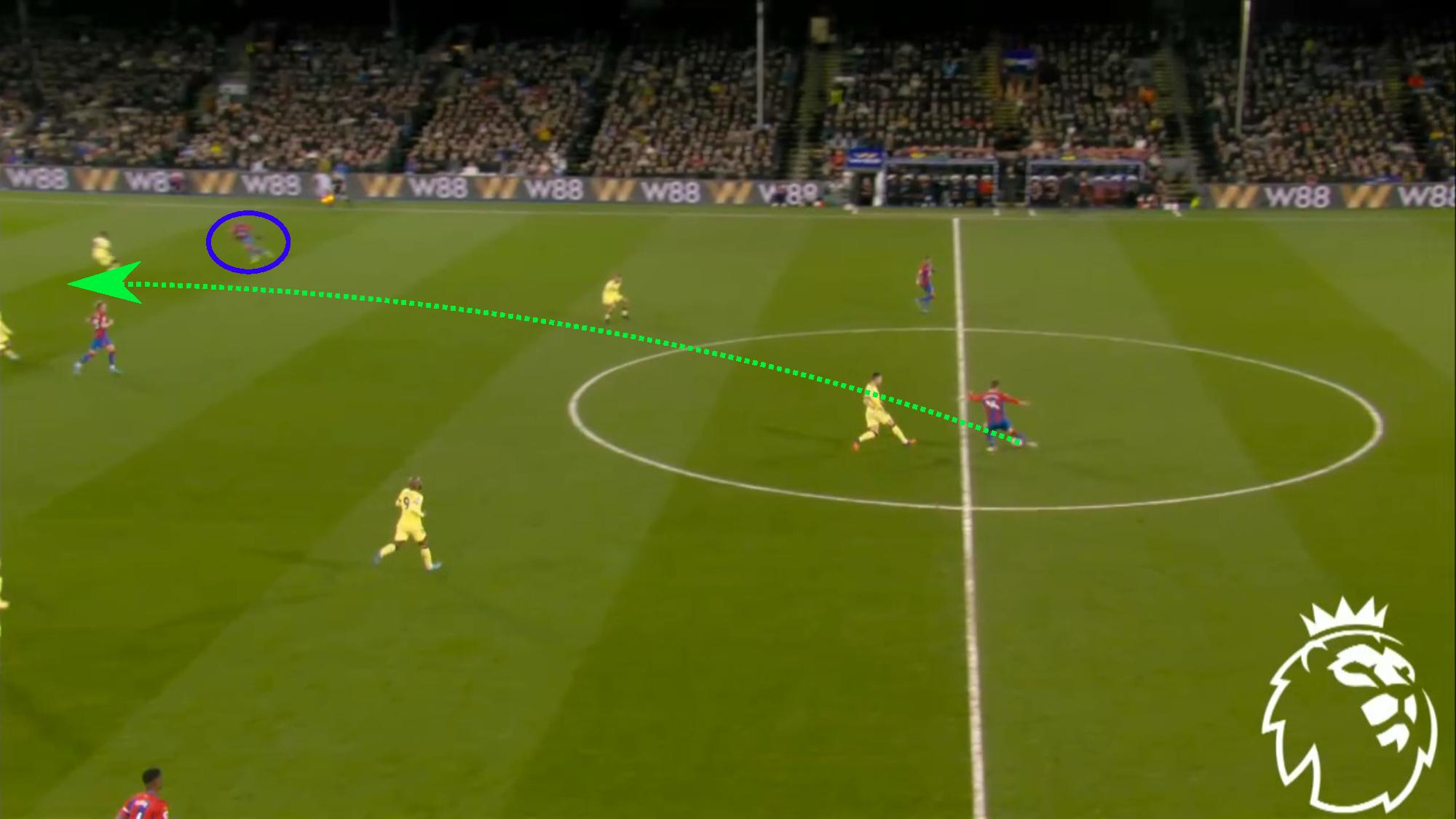 Despite the following examples’ lack of success, we can see that Anderson wants to play the long pass into a similar area. Against Leicester City, Anderson was constantly trying to pass the ball into the half-space from deep. The pink arrow shows us where Anderson would have liked his receiver to have been.

Anderson likes to play these passes as through balls as well. The pass itself is exceptional, and Ayew knew when to run. But, Ayew couldn’t get there.

But why does Anderson do this? It is because the half-space is an excellent area for Palace to have the ball. When players like Wilfred Zaha, Conor Gallagher, Eberechi Eze and Michael Olise cut in from wide positions, they can create chances easily. Jordan Ayew is a good finisher who may be more direct than the other wingers.

A good passer of the ball, such as Anderson, provides unpredictability to the defending team. All teams facing Palace will know about the threat from Anderson, and so they will have to adjust accordingly. This might mean teams defending slightly deeper not to give space for Anderson to pass into. Because of the space Anderson passes into, teams may have to defend narrower than usual. If a team’s defenders are narrower, it will create more space on the wings that Palace forwards could exploit.

As we will see, Palace wingers like to cut inside from wide areas. So, Anderson’s passing ability and tendencies will make it easier for the Palace forwards to find space in the channels.

Cutting in from the wings and 1 v 1’s

If you have watched Crystal Palace over the last eight years, you will know Zaha is a fantastic footballer. The Ivorian winger plays like a cross between a winger and inside forward. Looking at his heatmap, we can see Zaha likes the left channel, as most left-wingers would, but he manages to get into different positions. One of his most common positions is just inside the box from the left side. When Zaha is compared to notorious inside forward Sadio Mane, it becomes clear that Zaha is not a typical inside forward, and Mane takes up a much more central position.

In this example against Norwich, Zaha keeps the width for Palace, and Olise finds him. But, Ayew’s run makes it possible for Zaha to run at the defence. Ayew distracts the defender with his run and forces Max Aarons to watch Ayew rather than Zaha. This run creates the space for Zaha to run into and produce his magic. 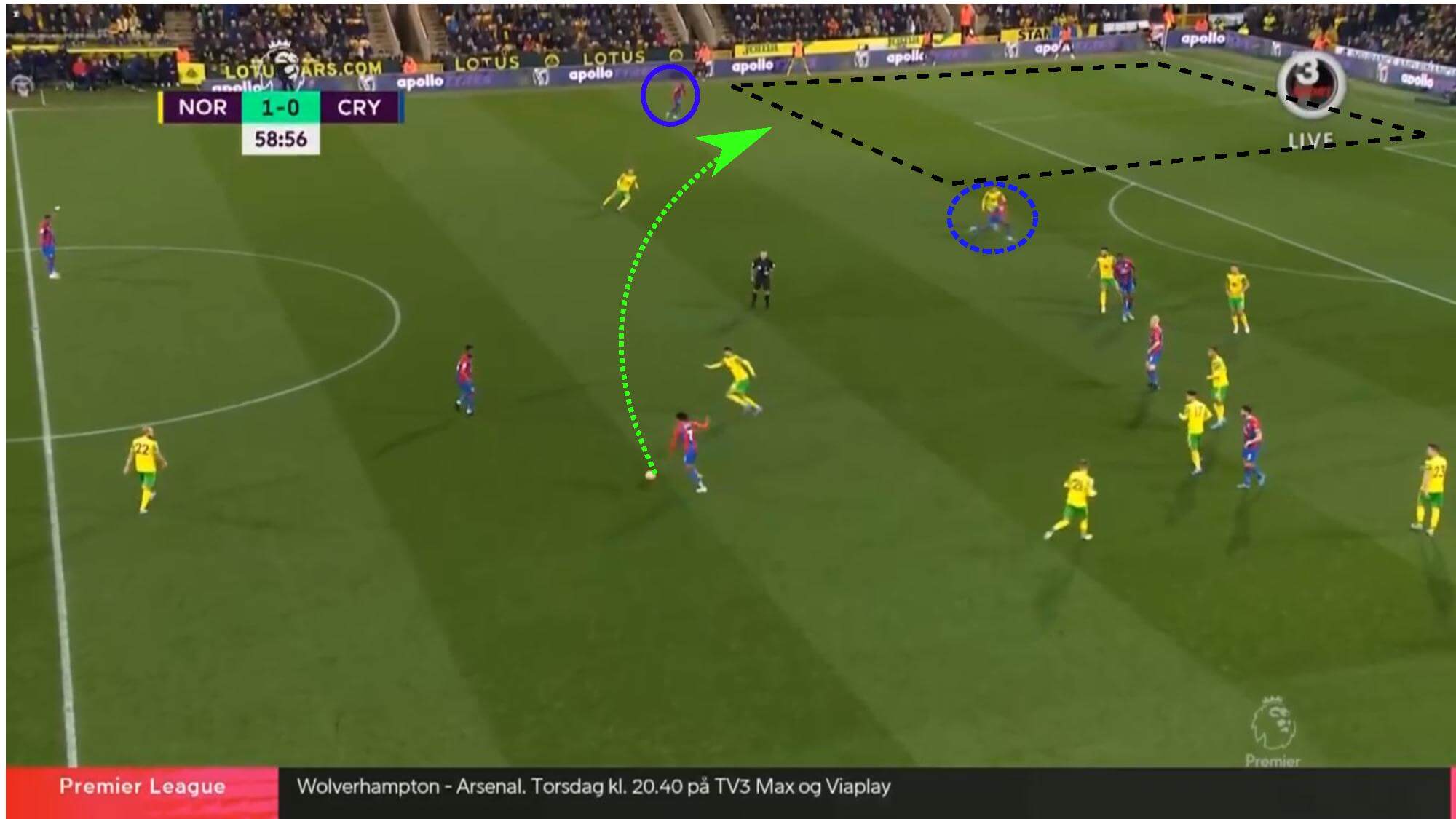 The movement from Ayew is not accidental. As we can see, all of the Palace players pile into the middle third of the pitch. This allows for two things. One, Zaha can now go 1 v 1. Two, if Zaha can’t get past his defender, he can cross the ball, and he has targets to aim at. In reality, Zaha beats his man comfortably with his skill, and the Palace player’s movement helps Zaha. 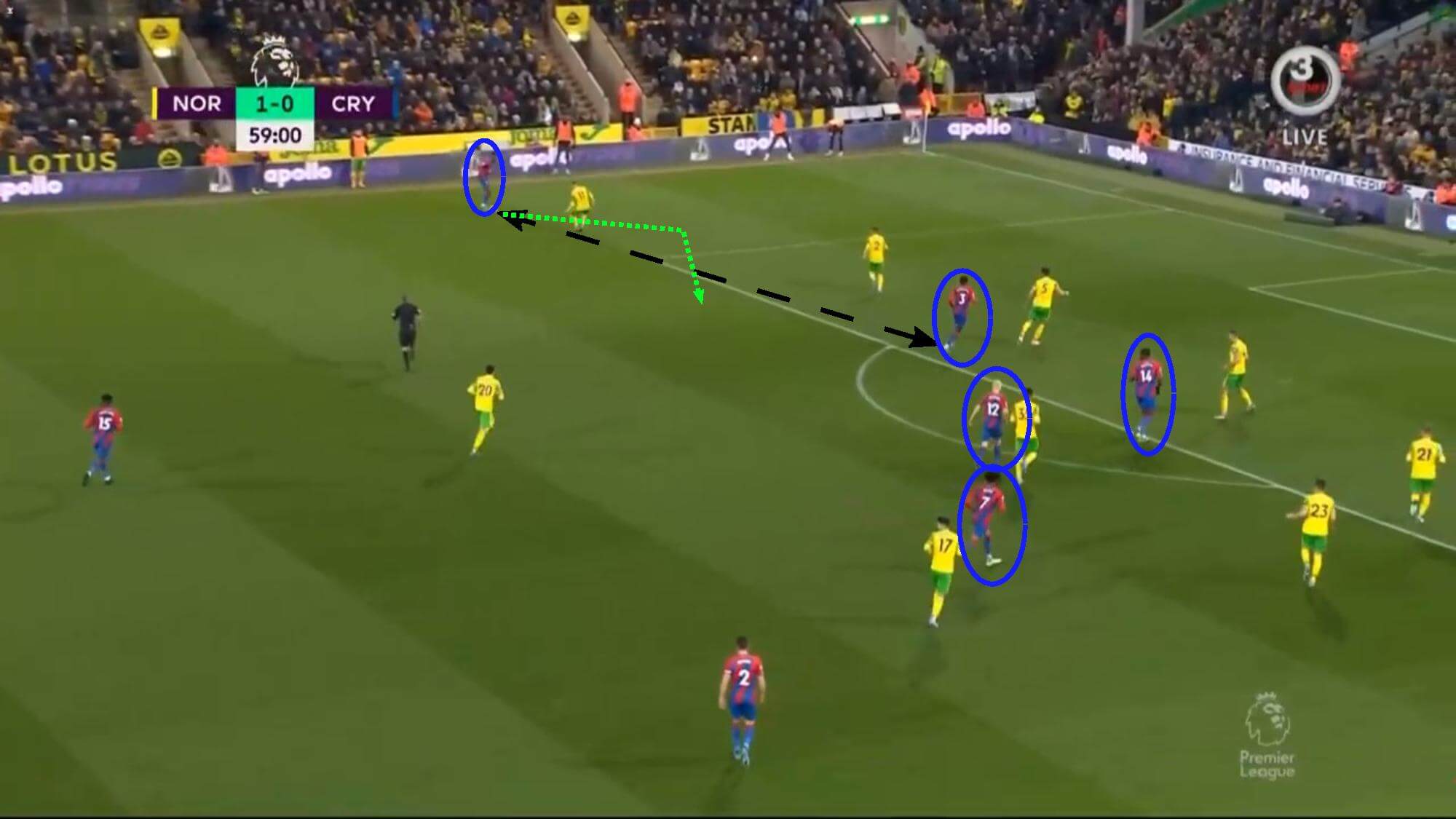 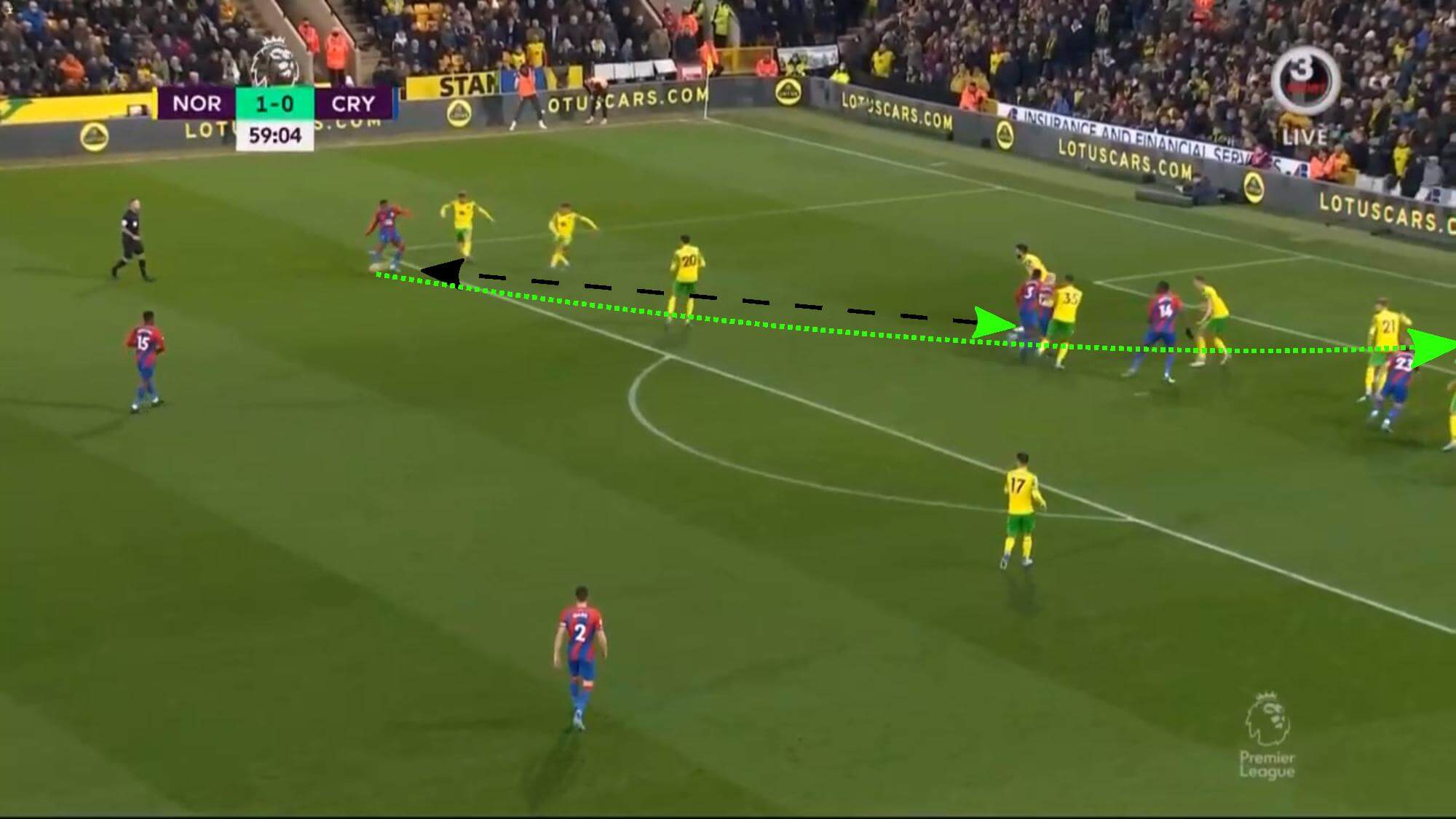 Allowing Zaha to be 1 v 1 wasn’t just a tactic against Norwich. When Crystal Palace played Watford in a pre-season friendly, we saw the genesis of the tactic. Zaha collects the ball wide and cuts inside. Whilst this was occurring, there were no place players trying to get into the penalty area within 10 yards of Zaha. This allows Zaha to isolate the Watford defender in a 1 v 1. 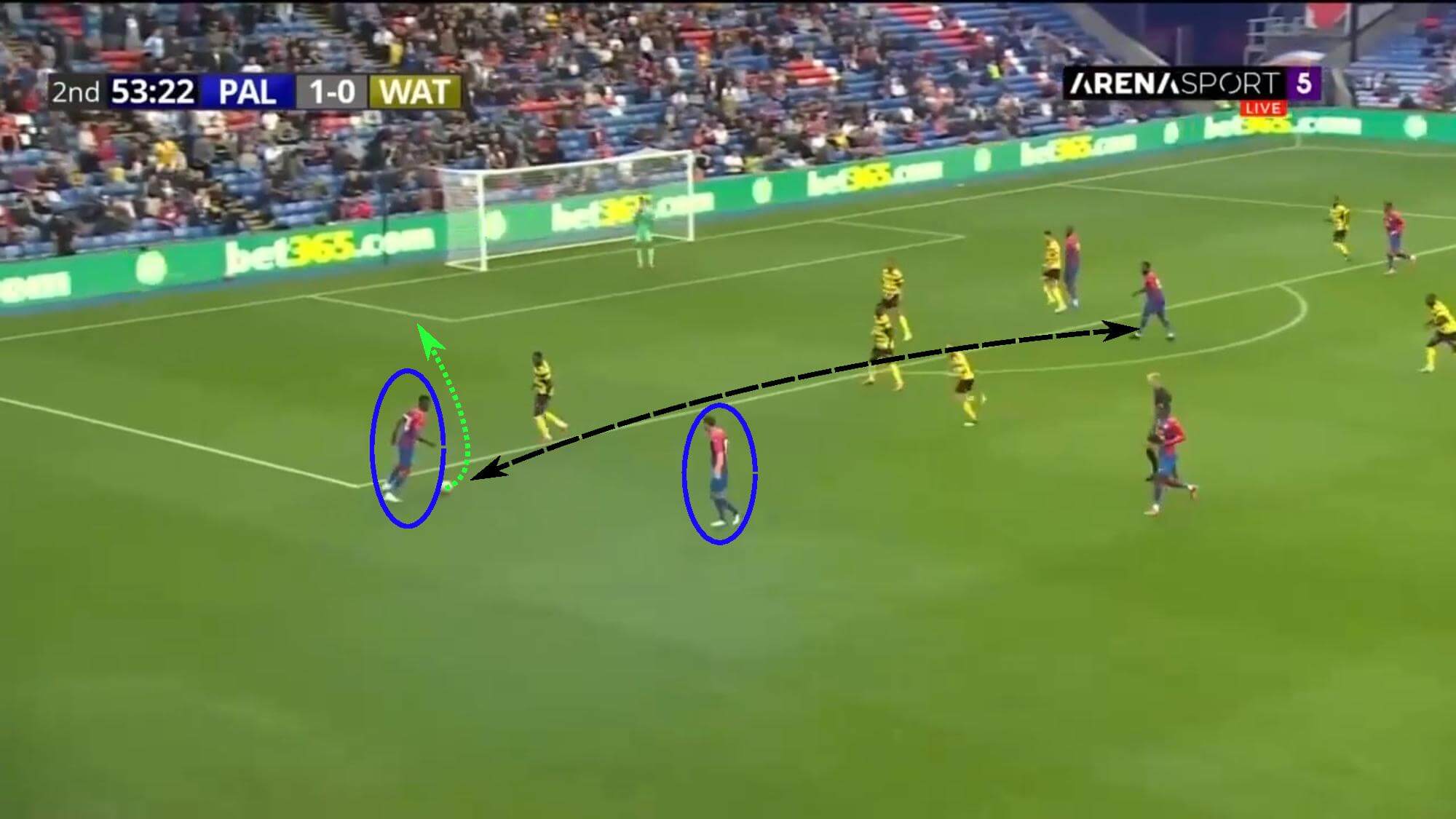 Then, Zaha chooses to place the shot. The players marked in blue are trying to bring defenders away from Zaha so that he can get in a 1 v 1 scenario. All of their runs are towards the back-post, which will move the defenders and divert attention from Watford players closing down Zaha as he can choose to shoot or pass to the back post. 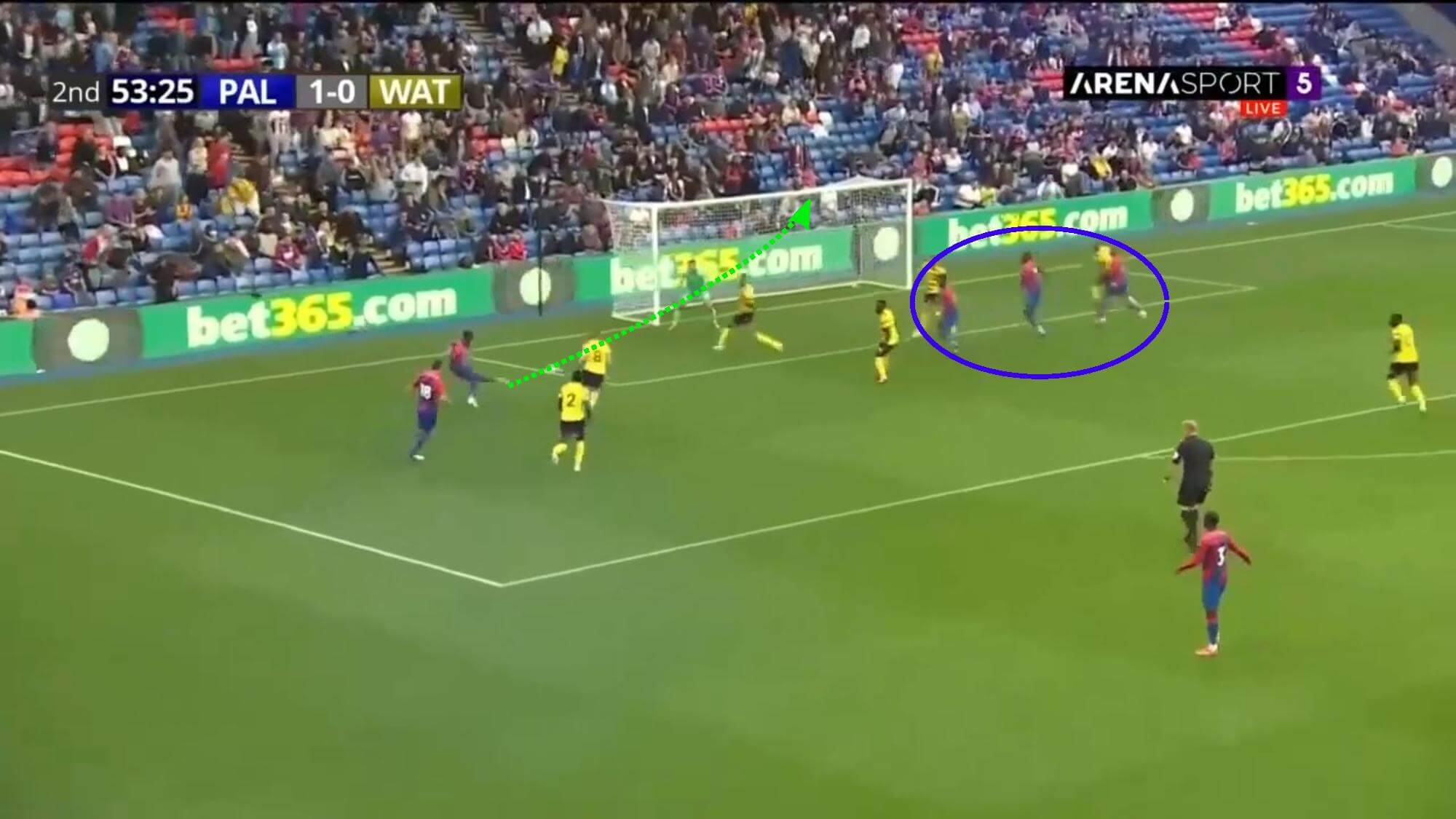 However, this is not just applicable to Zaha. Against Burnely, Olise was allowed to take on his man 1 v 1. Similar to the previous examples, no Palace players go to help Olise by offering a passing option. Instead, they allow Olise to try to get past his defender by dragging other defenders away from him. 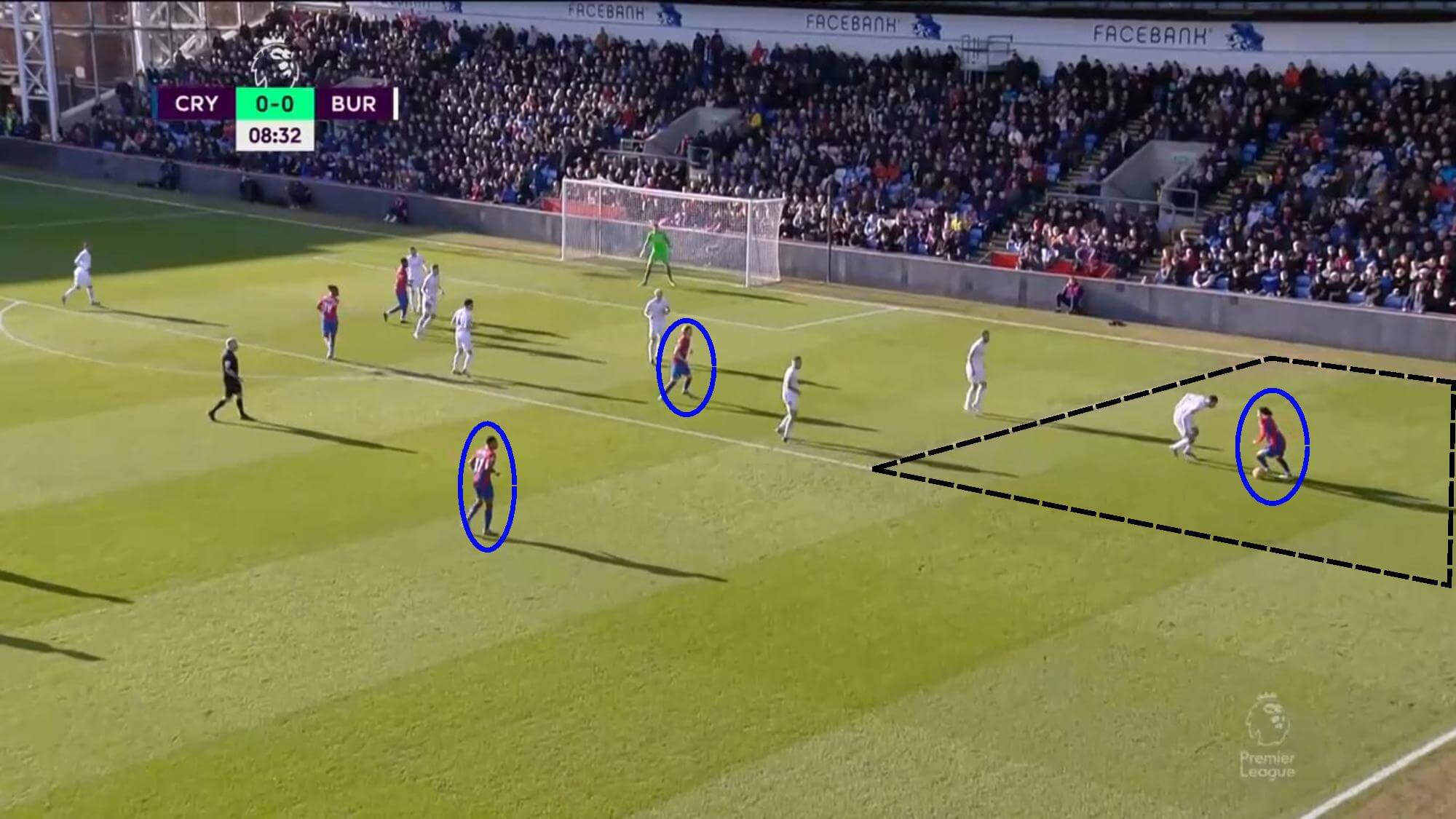 Why does cutting inside and 1 v 1’s make better chances?

If a winger can beat the fullback, then there won’t be anyone blocking it when they cross the ball. This will increase the likelihood of the cross being accurate and finding the intended target.

Build-up play vs a midblock

When Palace attempt to break a midblock, the wingers become crucial. When Crystal Palace faced Leicester City, The Eagles had to advance through a midblock. As soon as Palace got the ball into the wide positions, in the middle of the pitch, Leicester pressed. Zaha makes a typical run of a winger. Zaha wants to get wide to receive the ball. But, James Maddison’s curved run would intercept the pass to Zaha. 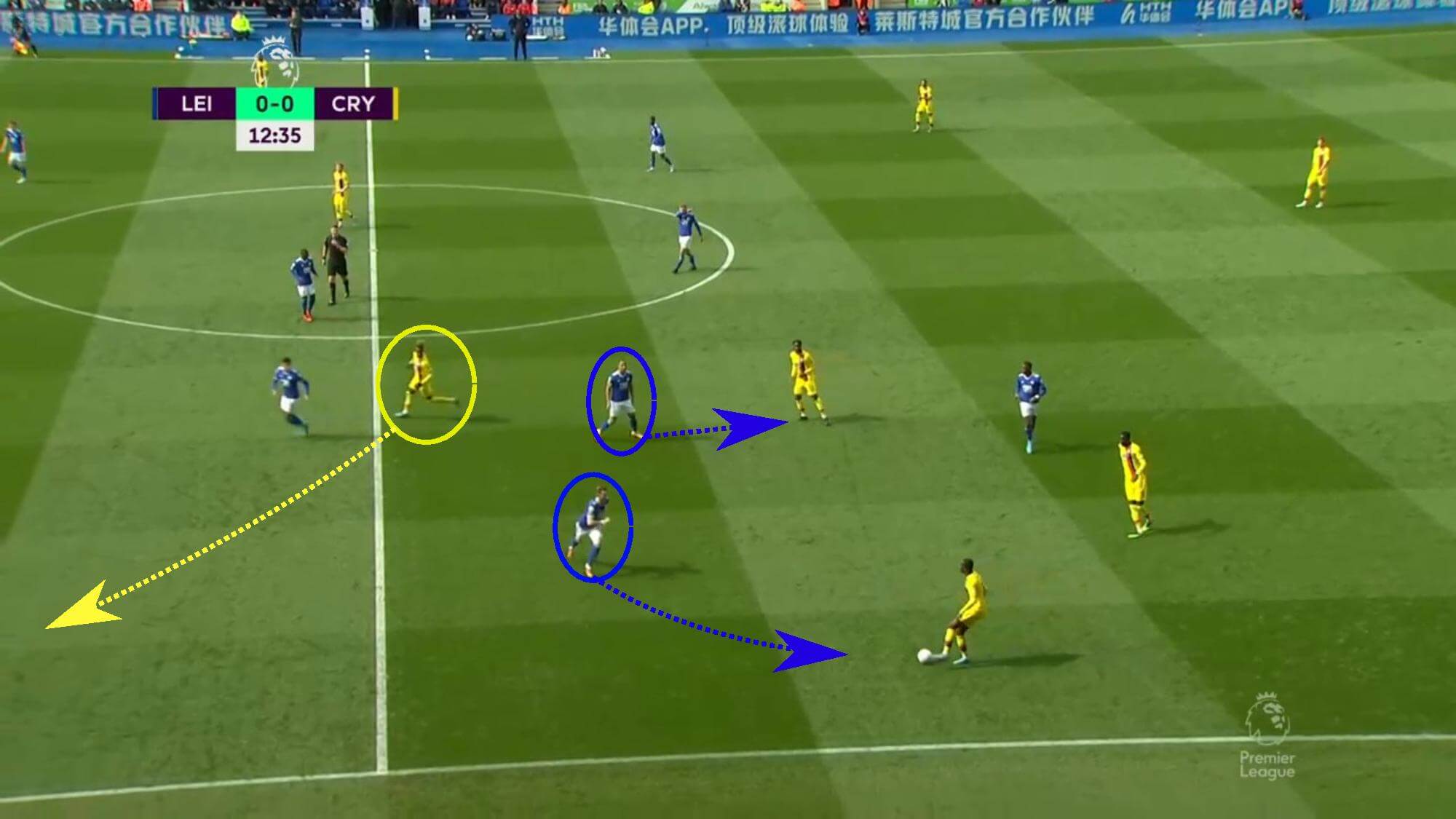 Zaha recognises this, stops his run, and returns to make himself an option. Whilst this is happening, Anderson and Guehi drop deeper to provide another option to the man on the ball. This helps the ball-carrier as the more passing options he has, the higher the chance of him keeping the ball. 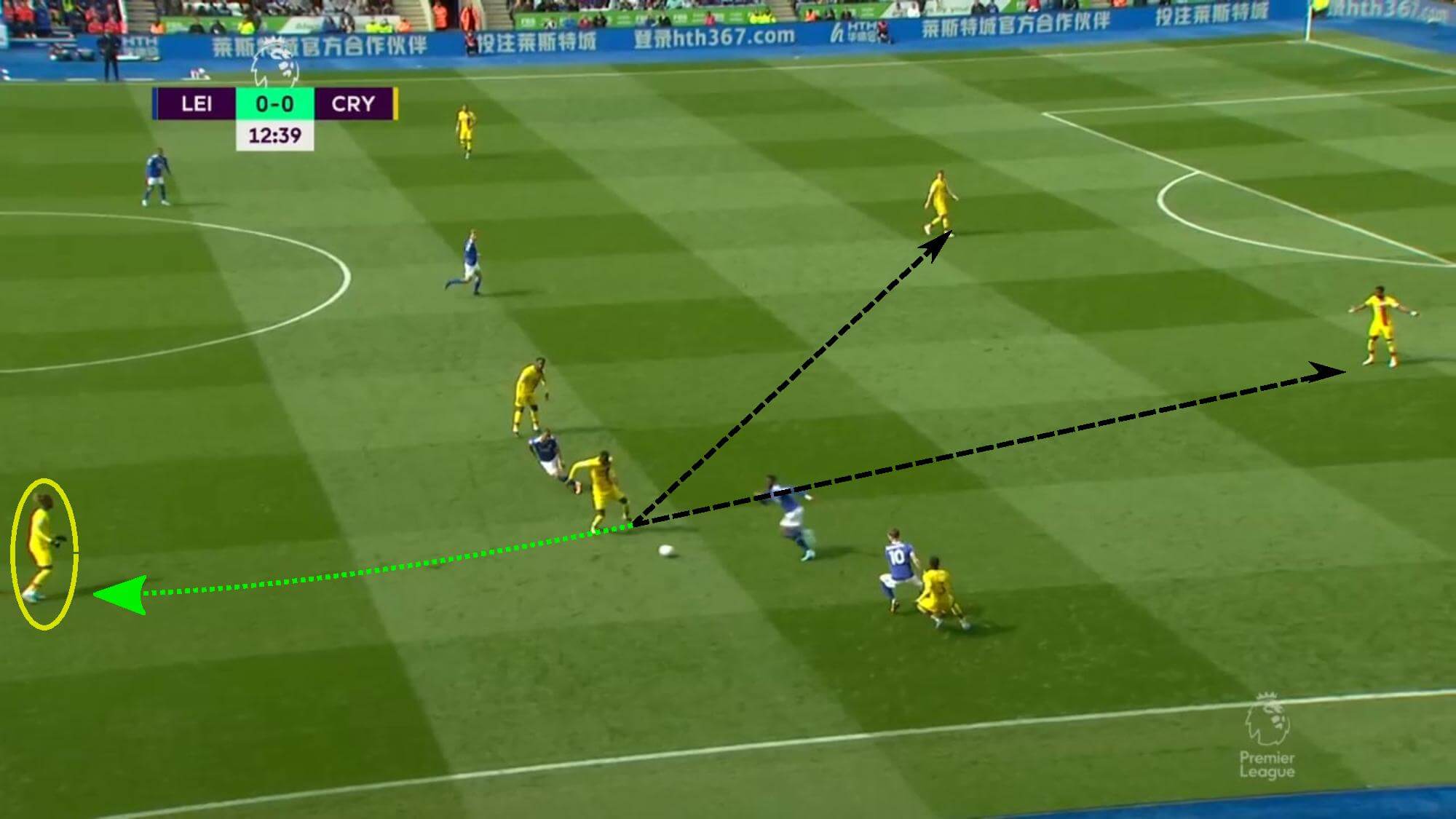 Zaha collects the ball, and the movement from Cheik Kouyate and Tyrick Mitchell makes space for Jeffrey Schlupp. Schlupp then moves the ball, and Palace can advance down the right-wing. 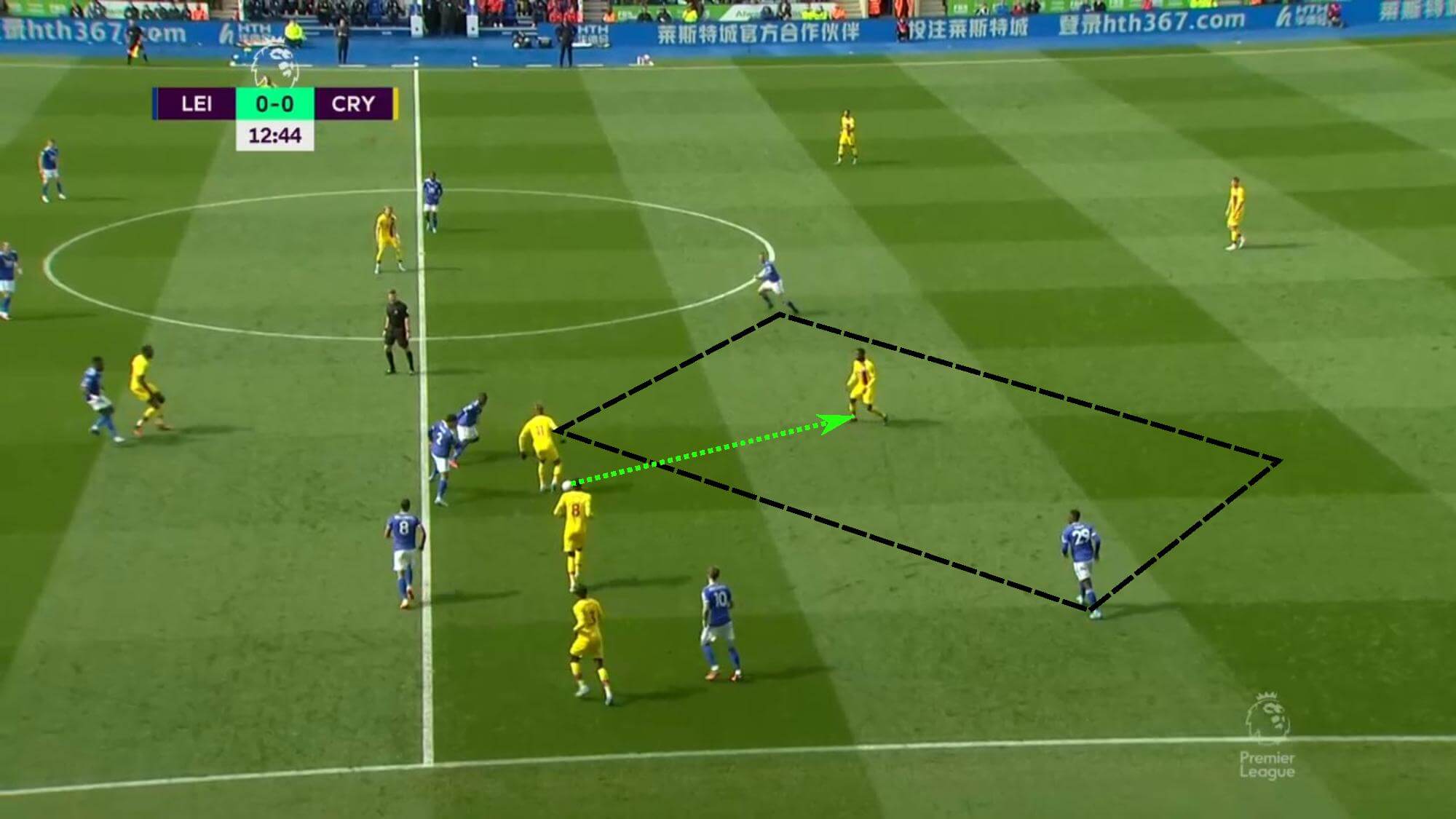 The movement from Zaha is essential to Palace keeping the ball here. The former-Manchester United forward wants to score goals, and his instinct is to provide an option for a through ball. But, Zaha has learnt to try and keep the ball and not rush attacks.

Build-up play vs a low block

Watford play a low block. In their 4-4-2 formation, their two strikers will sit deeper than the halfway line, and the back four will sit just in front of their penalty area. Palace would switch the play often and try to get the ball to the wings. Then, Anderson passes the ball to Olise with pace. The speed of the pass gives a signal to Olise for him to pass the ball first time. Before Olise even has the ball, Gallagher knows that he can run into the space left behind the Watford fullback pressuring Olise. Gallagher then crosses the ball first time.

These first time passes work well for breaking down a low block as it moves defenders around quickly. This will then leave space behind for Crystal Palace’s forwards to run into.

Crystal Palace are a fantastic attacking side. They have proved so many people wrong, and Patrick Vieira has done a tremendous job of making Palace a team that prioritises quality over quantity. When in possession, Palace have many great players to rely on. Wilfred Zaha is the talisman of the team. But, they have other creators like Ebere Eze, Michael Olise and Conor Gallagher, who are beginning to take the creative burden off of Zaha. Joachim Anderson is a great ‘quarterback’ who can ping a ball as good as any, and Palace rely on him to progress the ball.

Defensively, Palace are a different animal, but that is a story for another time…