New Crystal Palace Manager Patrick Vieira is rumoured to have described signing Chelsea’s Conor Gallagher as a priority. The Frenchman would have been thrilled then, to see the 21-year-old midfielder join on a season-long loan with the Eagles. Gallagher represents the direction which Crystal Palace’s overhaul has headed this summer – and for any neutral fans of the Premier League, Palace will be a side to watch with a keen eye over the first few weeks of the season. Gallagher’s highly-rated Chelsea teammate Marc Guehi signed permanently with Palace already, along with outstanding midfield prospect Michael Olise, who excelled in the Championship last season, and Lyon’s Joachim Andersen who impressed so much with Fulham on loan in 2020/21. These signings imply a potential shift in tactics, or at the very least in terms of recruitment goals.

He impressed with his energetic performances for West Bromwich Albion last season, and along with Matheus Pereira, he was a stand out for them throughout a difficult season.

This tactical analysis and scout report will delve into what Gallagher will bring to the Crystal Palace midfield next season, providing an analysis of his unique qualities.

Positioning and use in different formations

Gallagher is likely to start regardless of what formation Palace play, with Vieira’s conviction that he was a must-sign player obviously a key indicator, but also when we look at their needs.

With the signing of Olise to compliment an already quality trio of Jordan Ayew, Wilfried Zaha and Eberechi Eze, there needs to be some defensive stability somewhere, and whilst Luka Milivojevic certainly provides some defensive steel, there is noticeably a lack of a “midfield engine”. Palace played Jeffrey Schlupp in that role last season at times, and whilst he certainly has the energy to complement their midfield, he didn’t possess the requisite quality. Gallagher on the other hand is coming in to bring that steel with some quality in possession. His heat map from last season gives us an indication to the ground he covers, staying heavily in the half-spaces 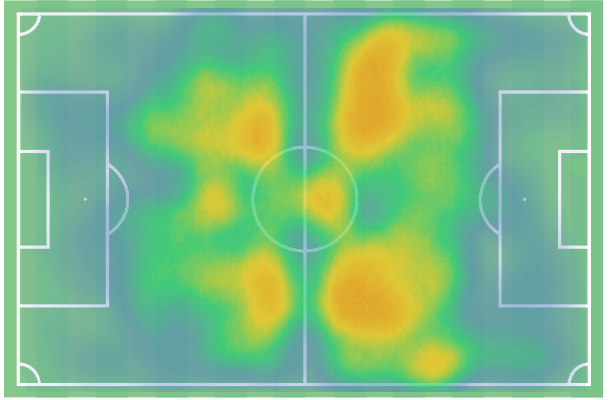 Gallagher isn’t a progressive midfielder by any means, however, he is technically sound and is a consistent passer. At one point in his career Gallagher was seen as a number 10, but he has matured as a midfielder at home in a double pivot, and his energy and ability to retain possession effectively is noticeable in this role, whilst he has continued to develop defensively, to the point where he is now a standout in the league.

This is perhaps Gallagher’s most impressive aspect of his game, showing a well-roundedness in many facets of the defensive phase. 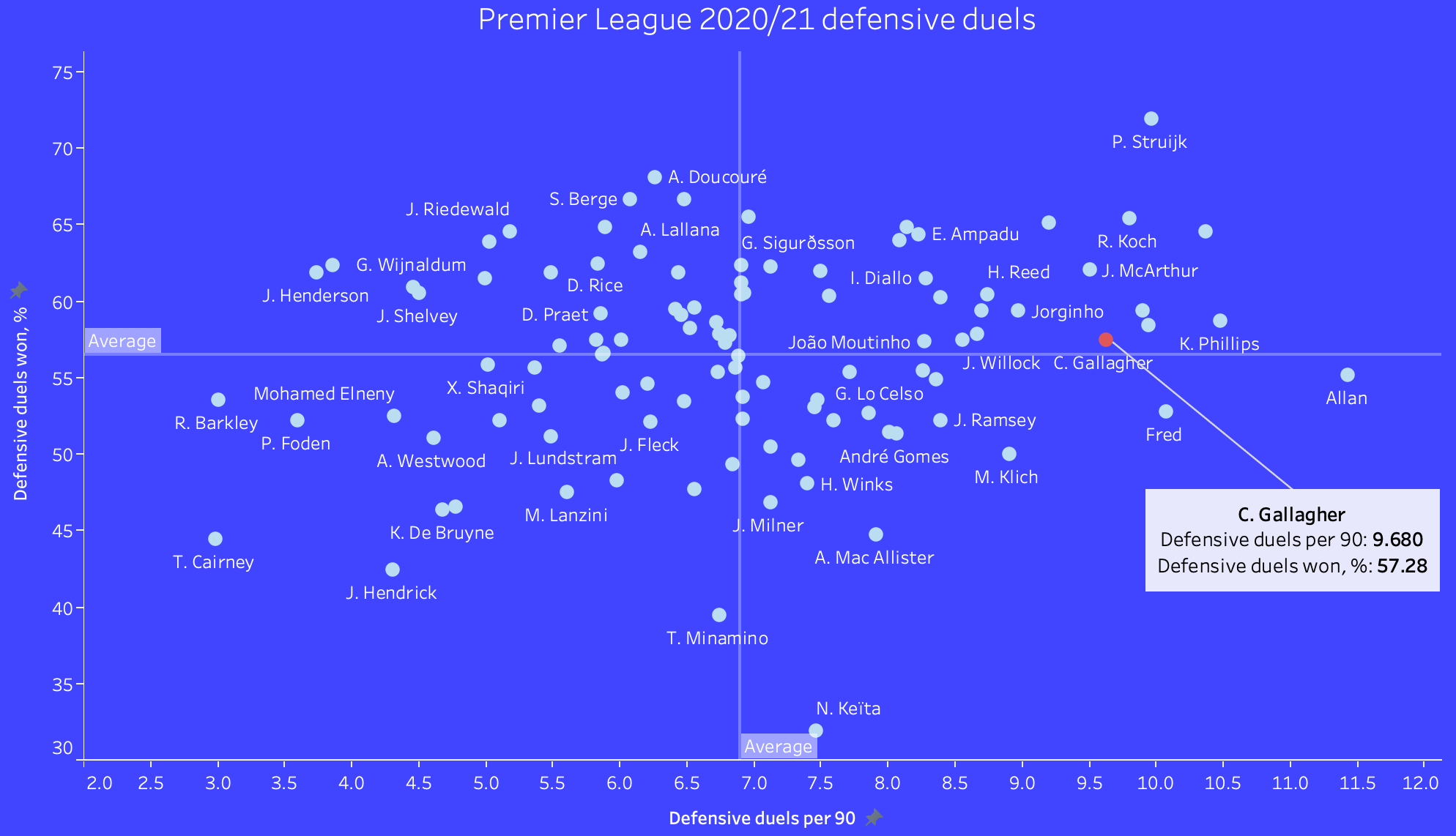 Gallagher is aggressive in closing the space between himself and the ball-carrier. He shows good anticipation of a pass into a particular area of the pitch and often begins pressing before the pass has even been made. He decelerates before getting too close where he could be rounded easily by the dribbler, and takes a side on position, showing the ball-carrier in the example below away from the centre of the pitch where he can close the space more easily. 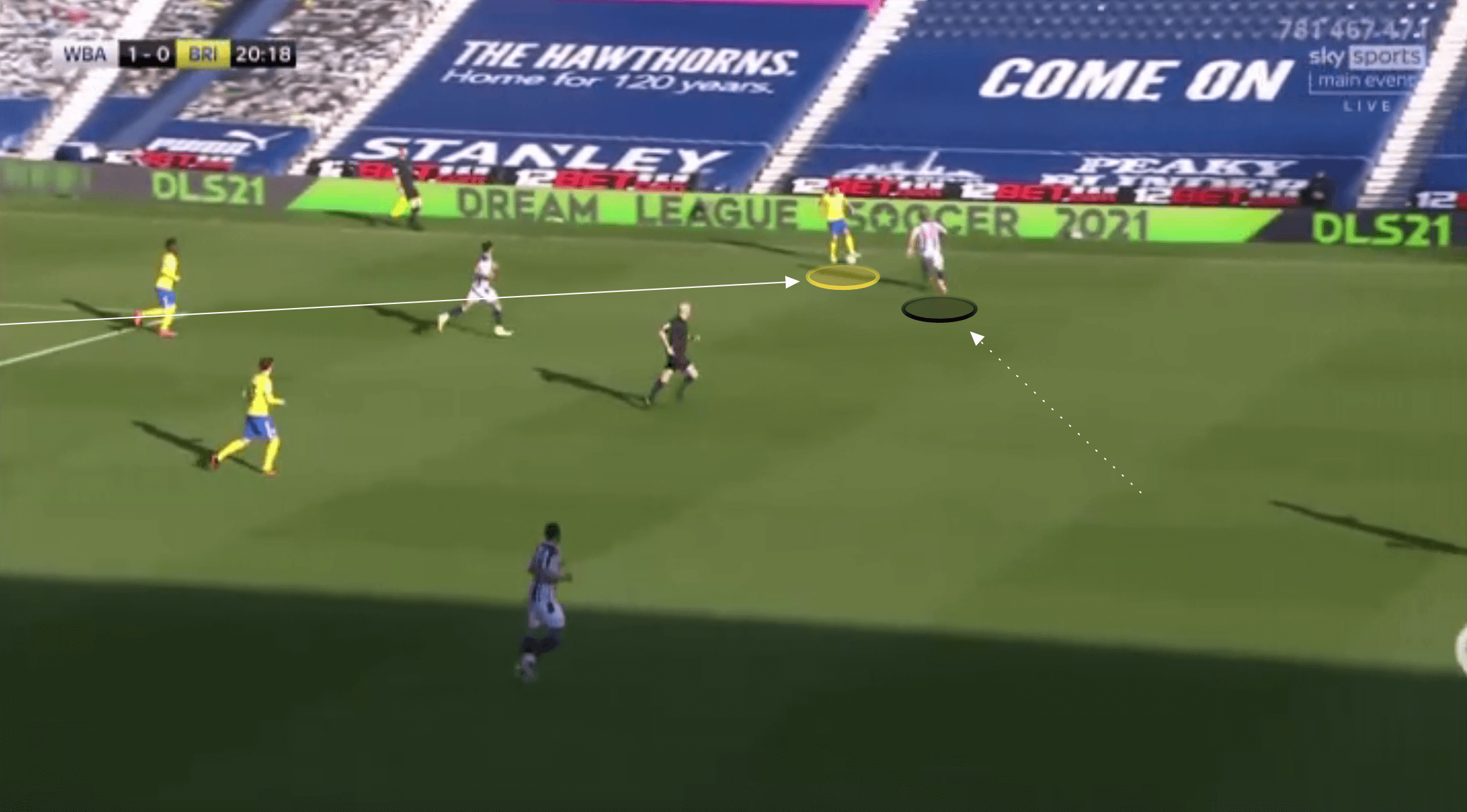 Gallagher shows pace on the turn to recover quickly if the opponent looks to beat him. He is physical with the player, leaning into them or using his arms to push them off balance, but doing so legally. 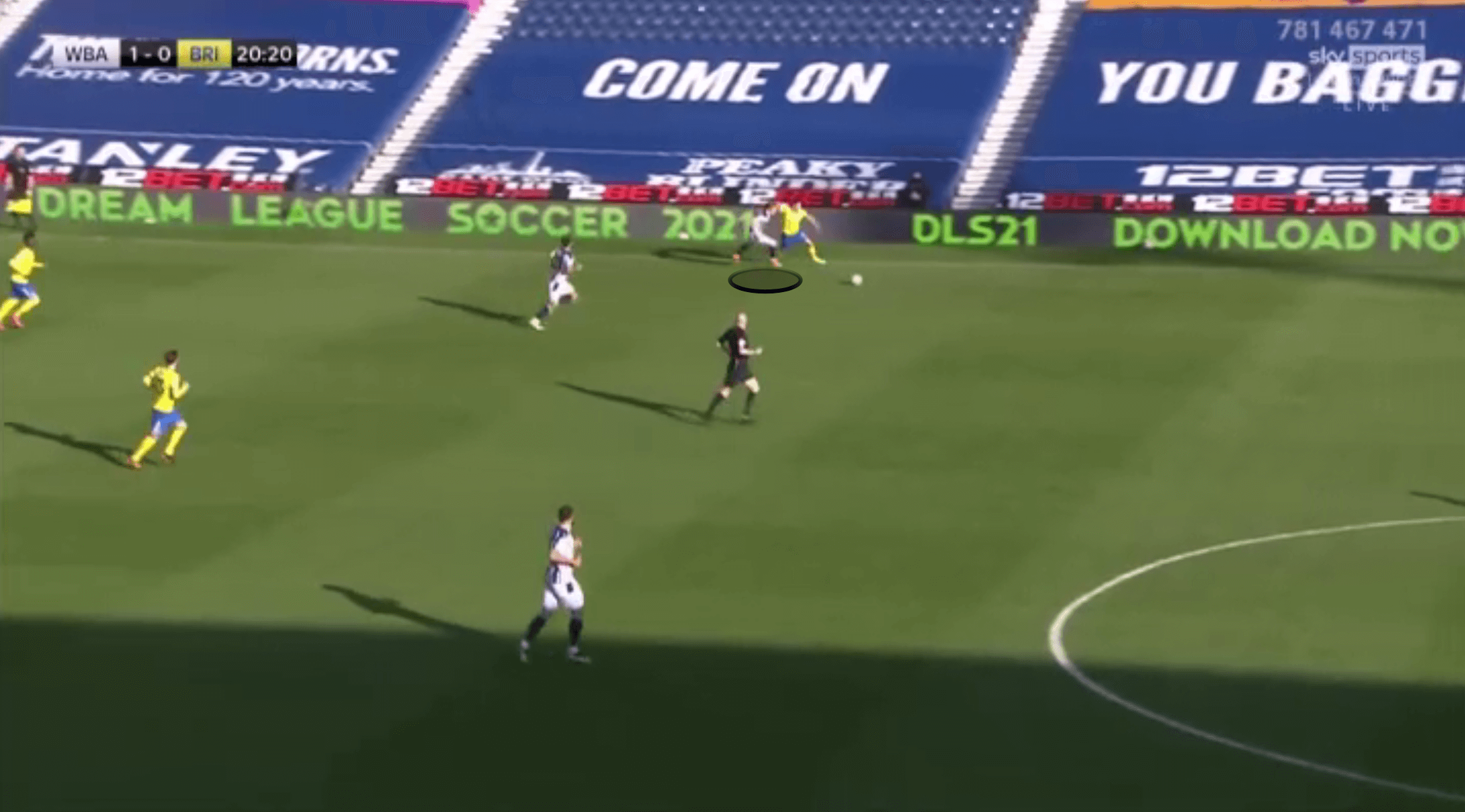 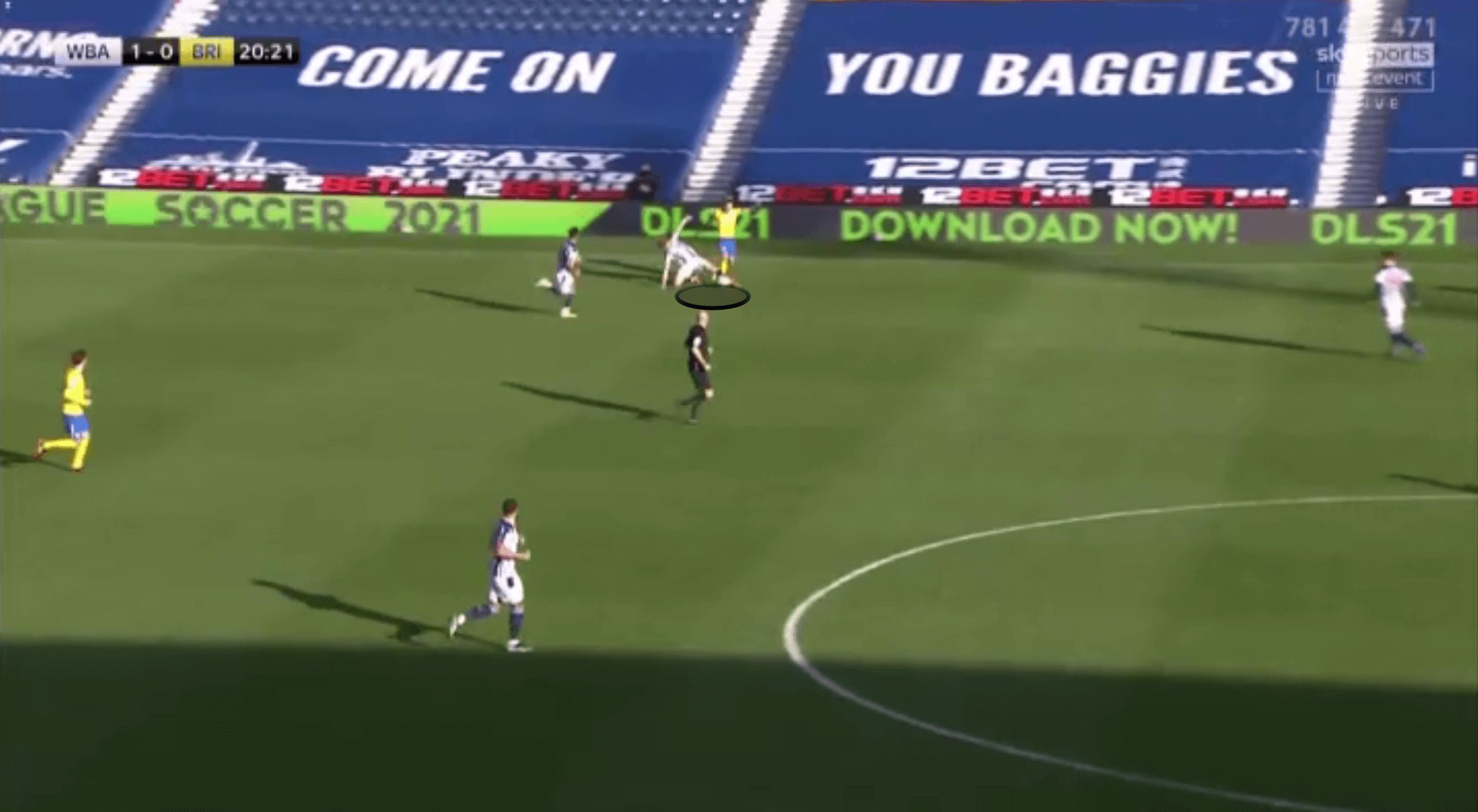 Gallagher sits centrally, screening his back four, but shifts across the width of the pitch quickly to pressure players finding space in between the lines. Again he will demonstrate anticipation to react to the intention of the pass before it has been played. 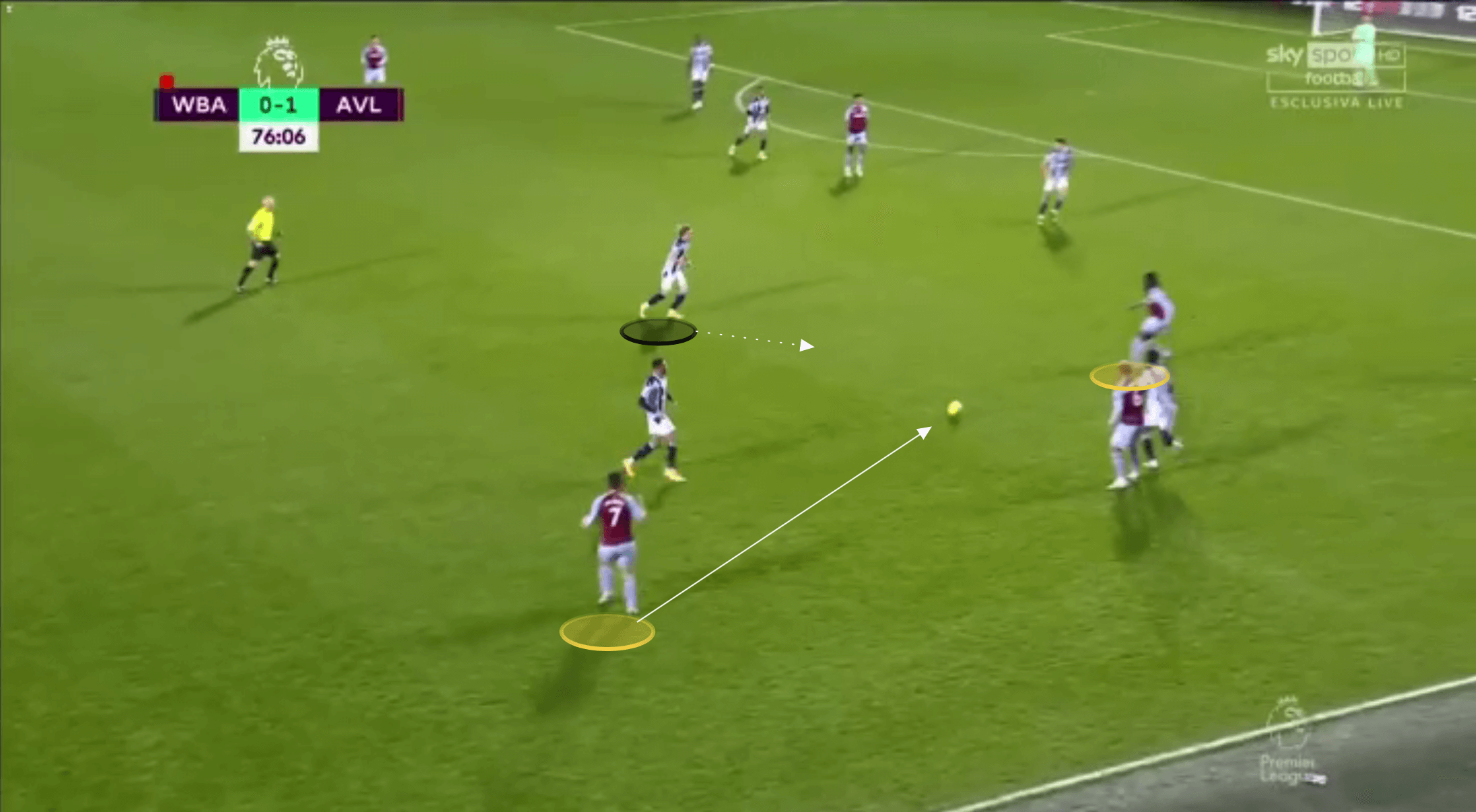 Once more he closes the space immediately and does a terrific job of getting his body in between the ball carrier and the ball. He wedges himself between the two, and his ability to turn sharply allows him to nick the ball away from the player and immediately change direction. 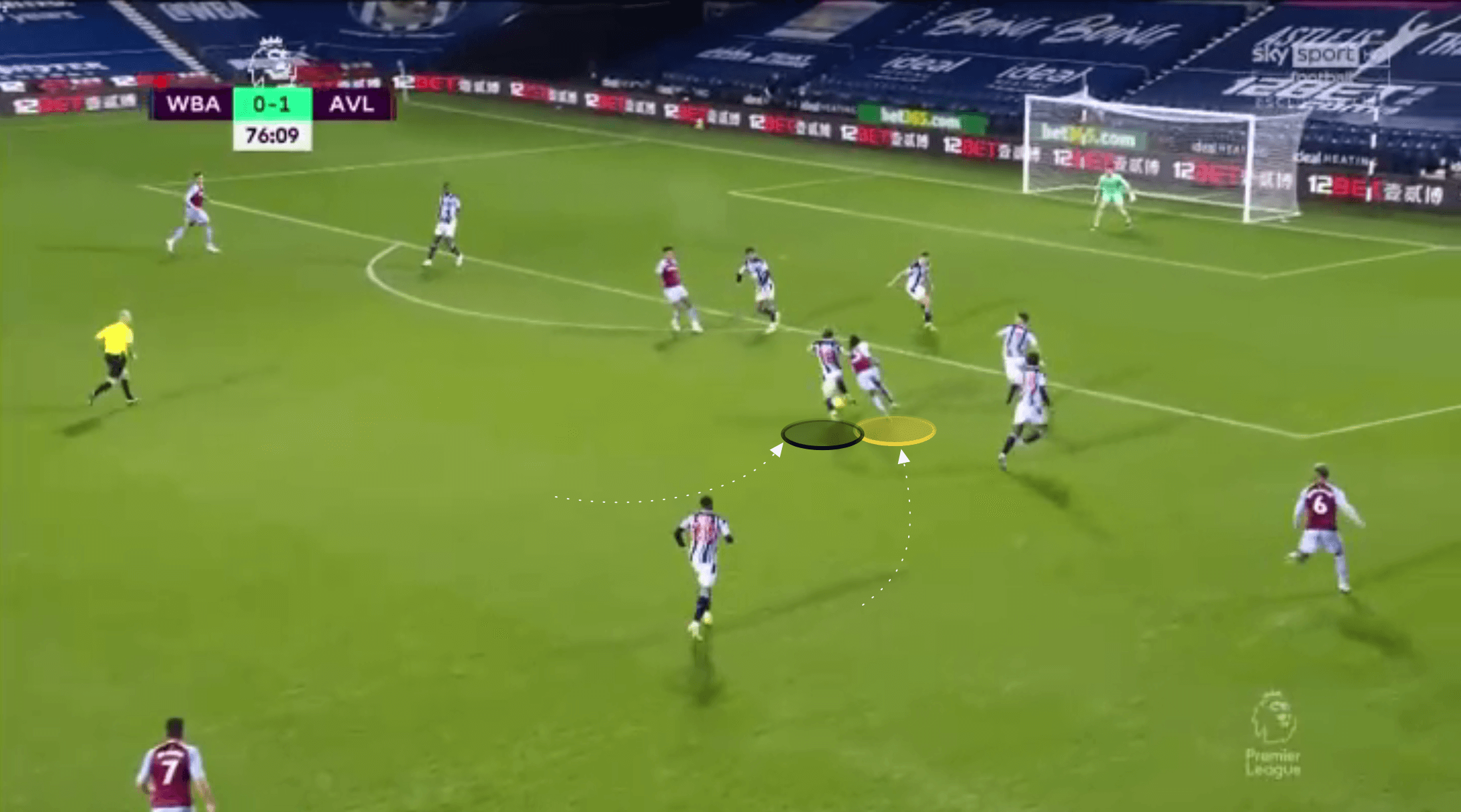 Gallagher is a reliable performer, consistently tracking back, and dropping into the backline where necessary. He operates close enough whereby if a full-back gets drawn out wide to press, he can rotate into the backline and fill that space.

His awareness of opponents making attacking runs into dangerous areas allows him to provide effective cover and relief to his defence.

Below we can see an example of this as Gallagher drops back into the box and scans, checking his right shoulder. He sees the run of the Aston Villa midfielder Douglas Luiz, and Gallagher accelerates into the box. 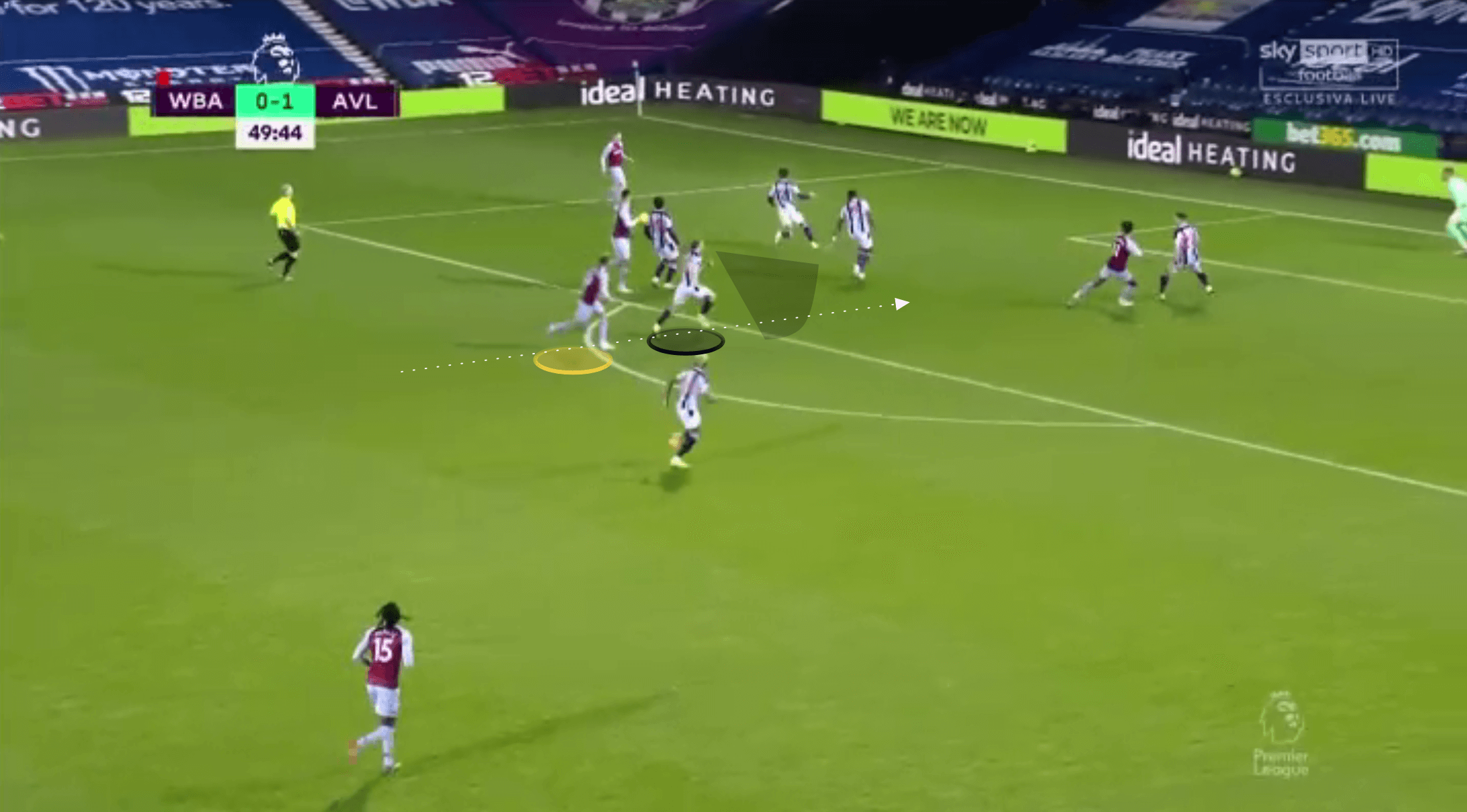 He is subsequently able to cut out the cross, with outstanding athleticism, and prevent Douglas Luiz from getting a free-header in on goal from 12 yards out. 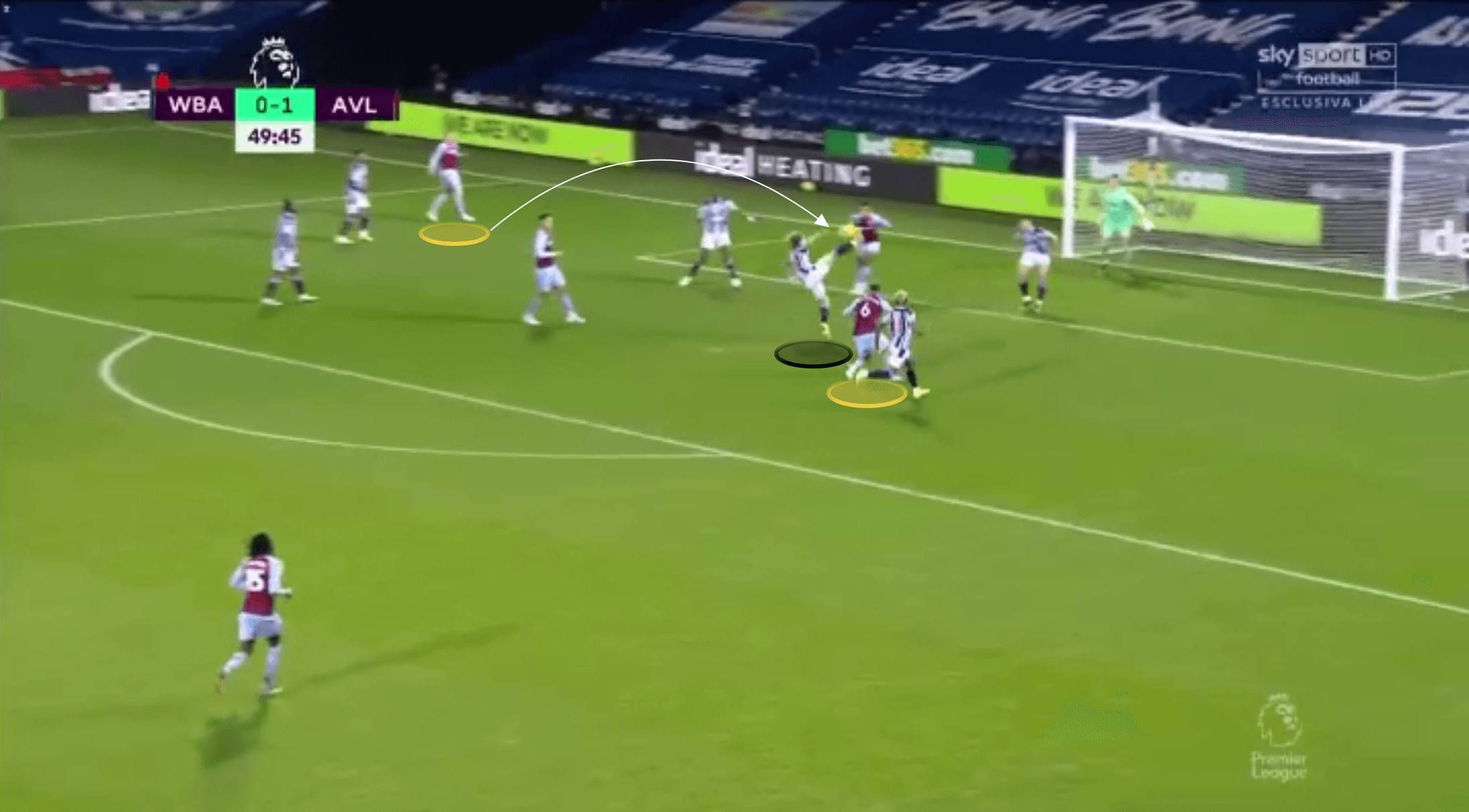 Gallagher’s knack for cleanly stealing the ball away from a player as they drive forward, means his actions are key to starting an attacking transition. We can see an example of this occurring as he cuts across the opponent, extending his leg to win the ball. 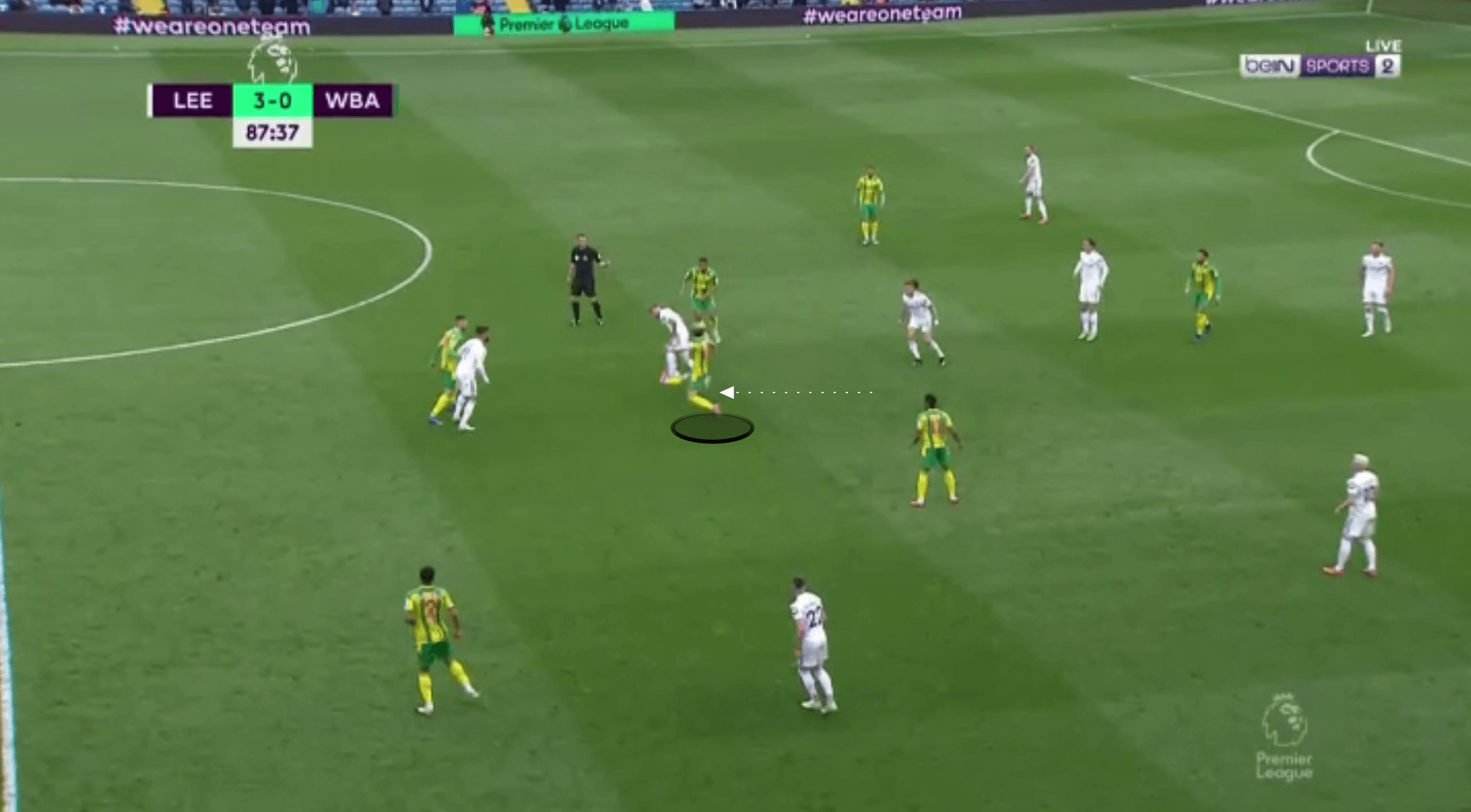 He shows composure in this moment and consistently looks to find a pass away from the pressure. Below he looks up and plays a forward pass, before moving forward himself to support this pass, starting the counter-attack, and retaining possession. 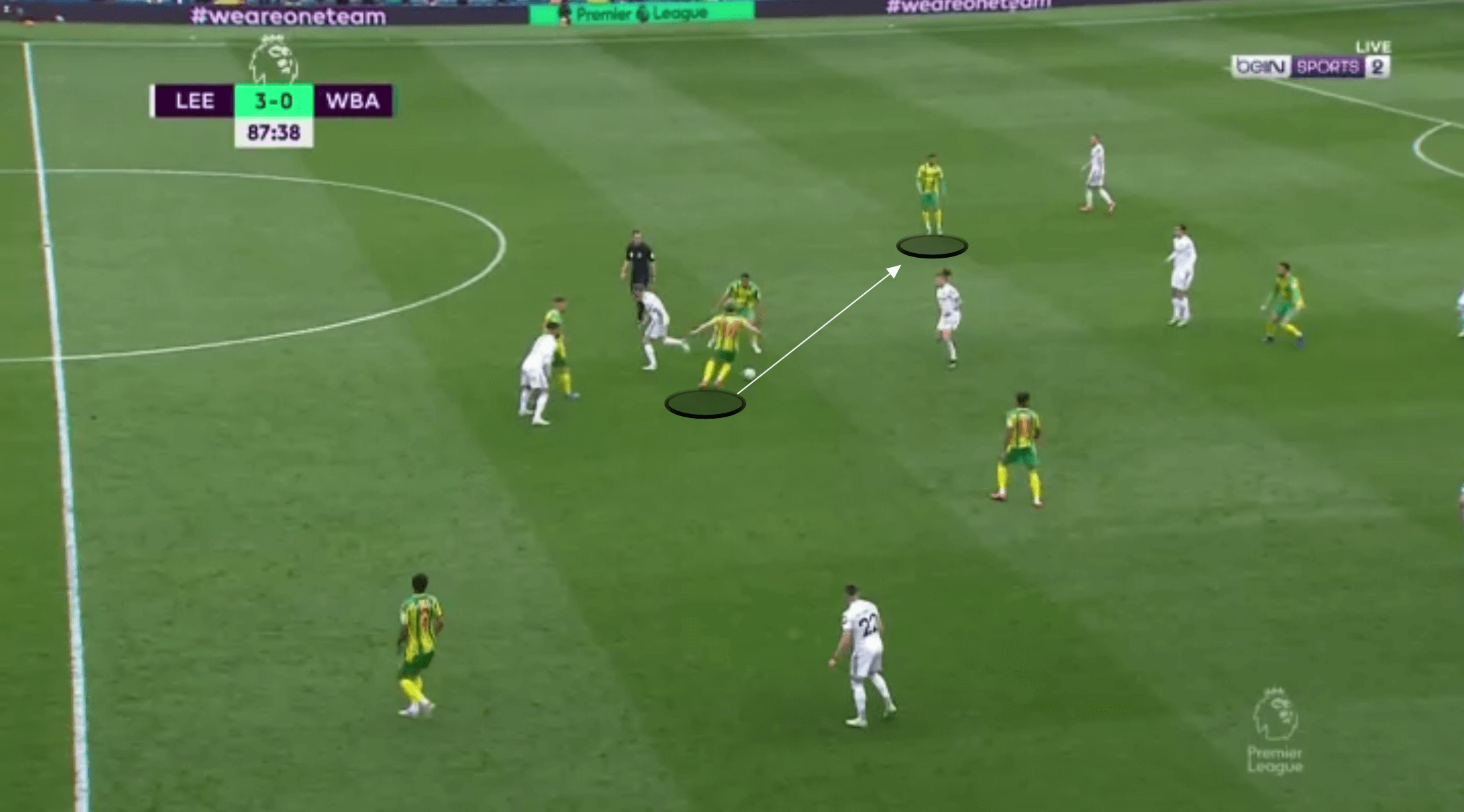 Gallagher is a box-to-box midfielder and therefore contributes as much in deeper areas as he does in the final third. He will anchor more advanced build-up play, shifting across the width of the pitch, and either combining in link-up play to progress the ball, or recognising the need to make a switch of possession, which he does confidently, and accurately with either foot.

Below we can see an example of this, which highlights why his decision-making in possession is of a high quality where, as he shifts across the pitch to provide an inside pass option, he scans to see whether there is pressure near him and if there are any forward pass options. 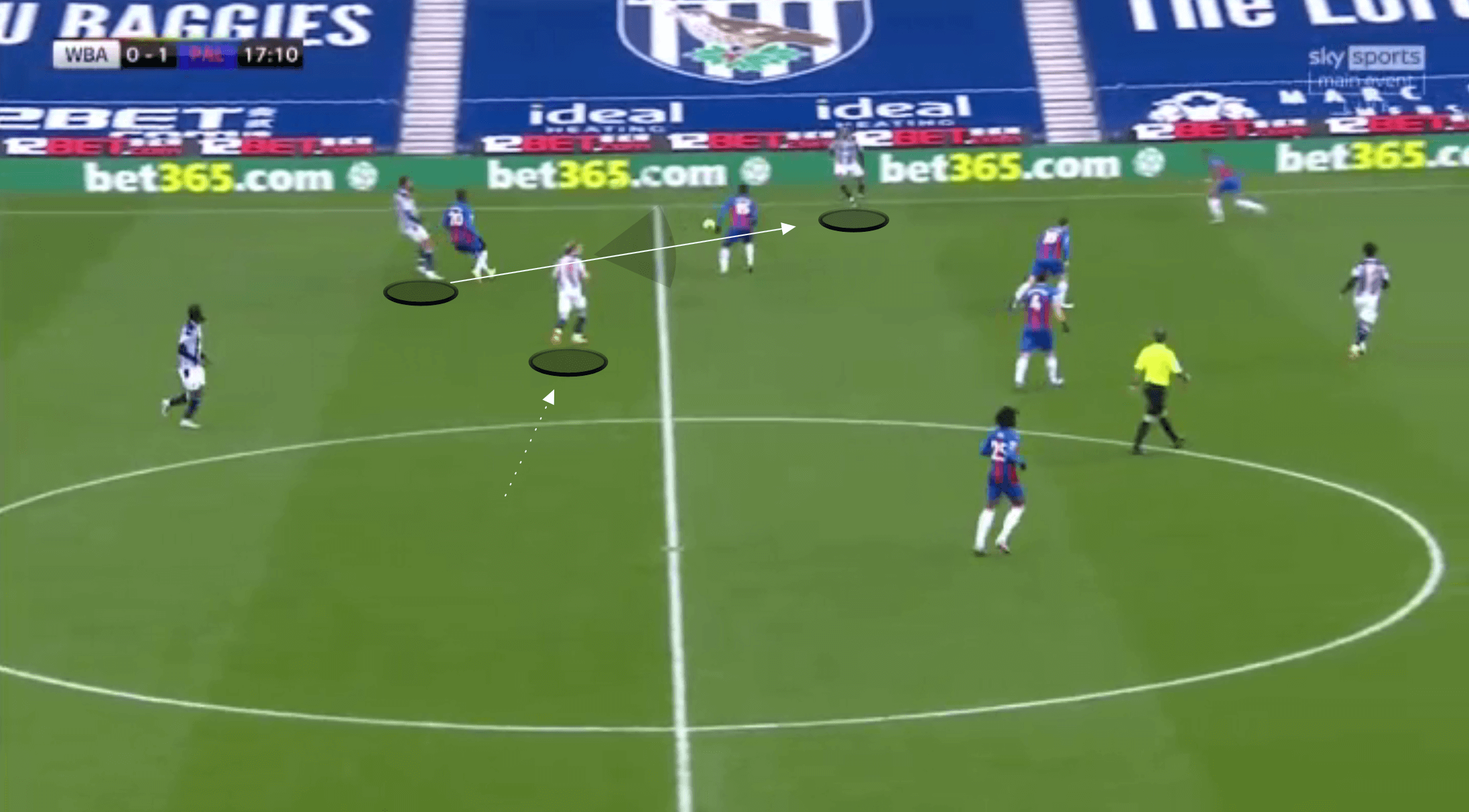 He receives with an open body position and seeing the cluster of Palace players on his side of the pitch, makes the decision to switch the possession, making few touches before playing the pass. 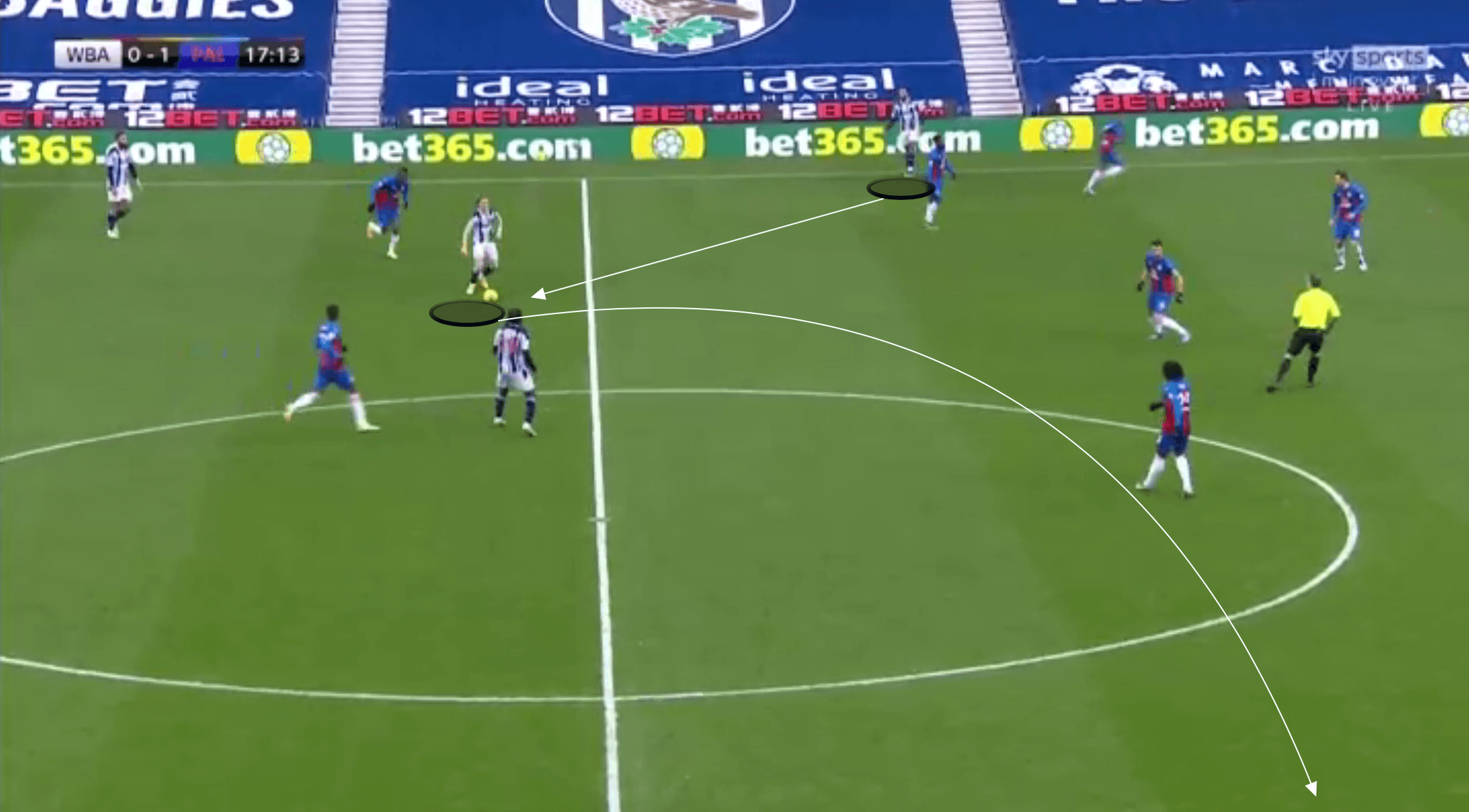 He doesn’t play a high number of through passes, but nevertheless still looks for any advantageous forward pass opportunities when in possession in a deeper area. He has the vision and technical quality to pull these off when the chance arises, and hits his through passes with the requisite weight of pass and is generally accurate too. 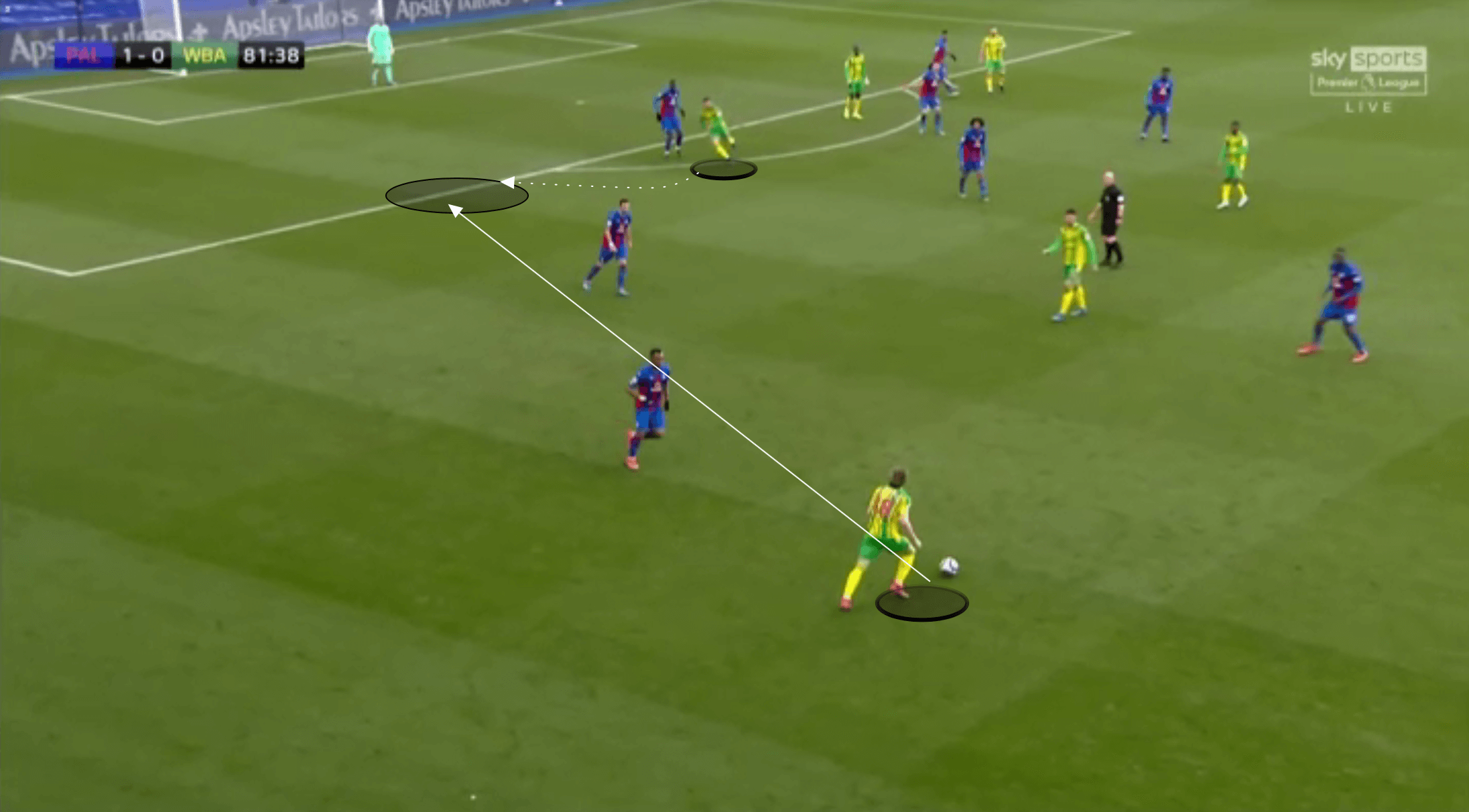 As he nears the edge of the area, Gallagher will shift right across the width of the pitch looking to get on the ball in the half-space or even on the wing. He is confident putting crosses into the area, and can do so with either foot and off of one touch. Of his two assists last season, one came from a cross in open play and the other was the result of a corner taken by Gallagher. He can deliver the ball accurately into dangerous areas and at a good pace too. He may well take the mantle of indirect set-piece taker for Palace, but expect him to drift into these areas and cross into the area, particularly if Jean-Philippe Mateta or Christian Benteke are on the pitch.

In the image below he hits a cross in first time, lofting the ball into a dangerous area where West Brom’s attackers equal United’s defensive numbers. 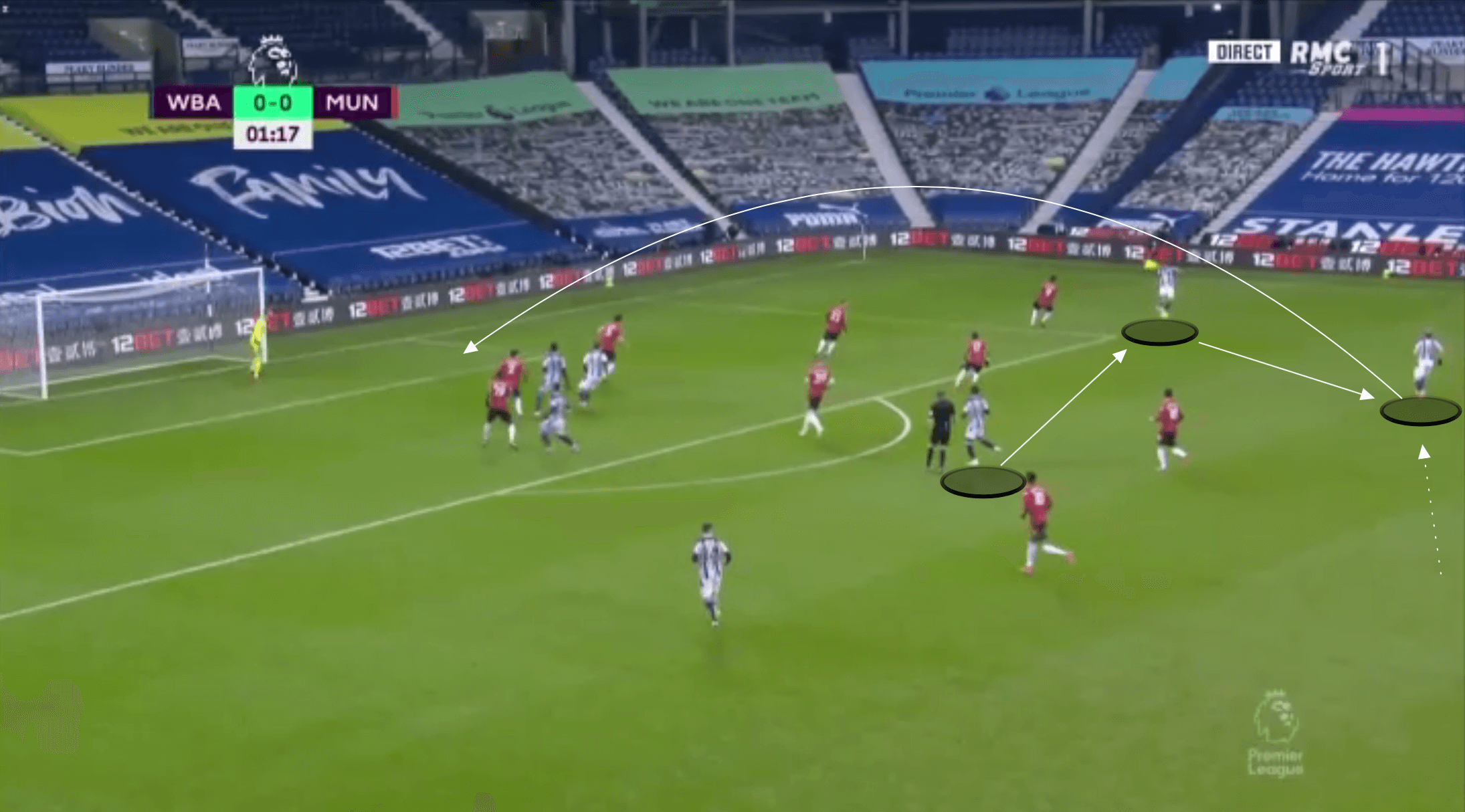 Gallagher isn’t a key contributor in the final third, however, he pushes forward to contribute to attacks. He will make late runs off of his more attacking teammates, generally targeting the half-spaces, as highlighted in his heat map. 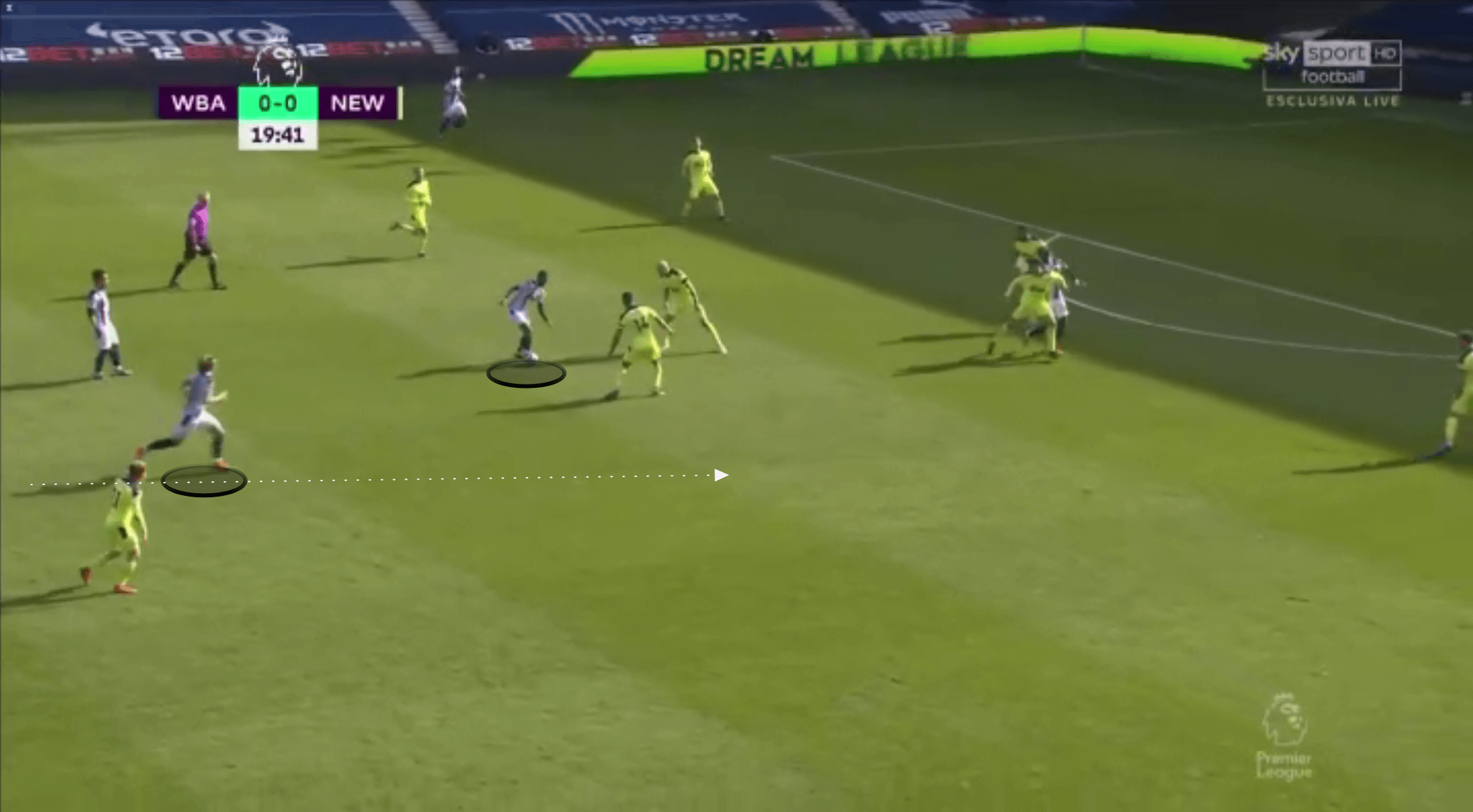 He can receive in these positions on a quick break, quickly gathering possession, and just as quickly offloading the ball, acting as a bridge between the central attackers and the wingers. He will engage in link-up play, drawing in the opposition full-back and looking to instantly make a run in behind where he can potentially cross from as seen below. 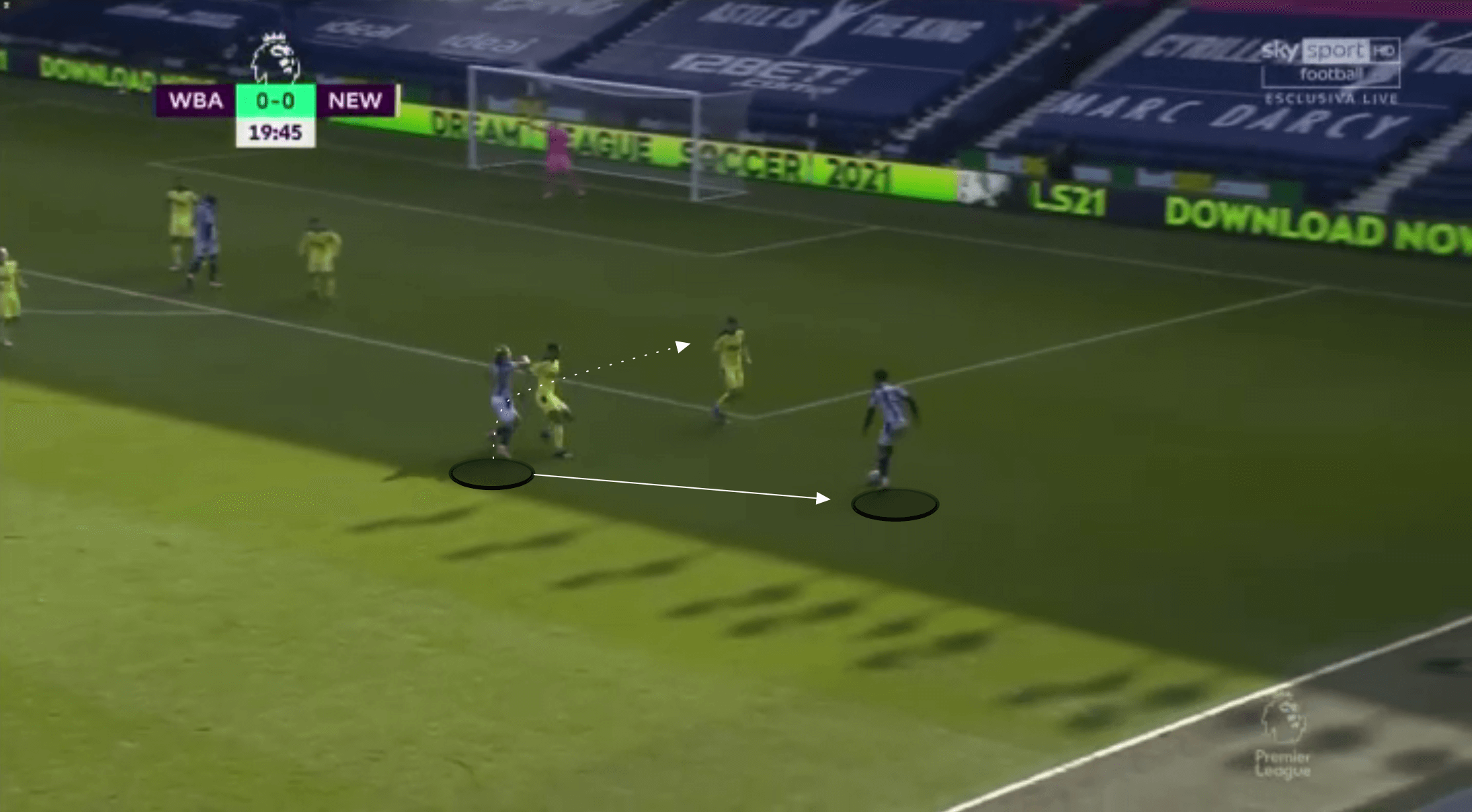 Gallagher can beat players in these areas too, and averaged 3.03 dribbles last season with a respectable completion of 46.2%.

If his centre-forward vacates the central space between the opposition centre-backs Gallagher may rotate into this area, making a late darting run between the two, as he looks to receive the ball in behind. 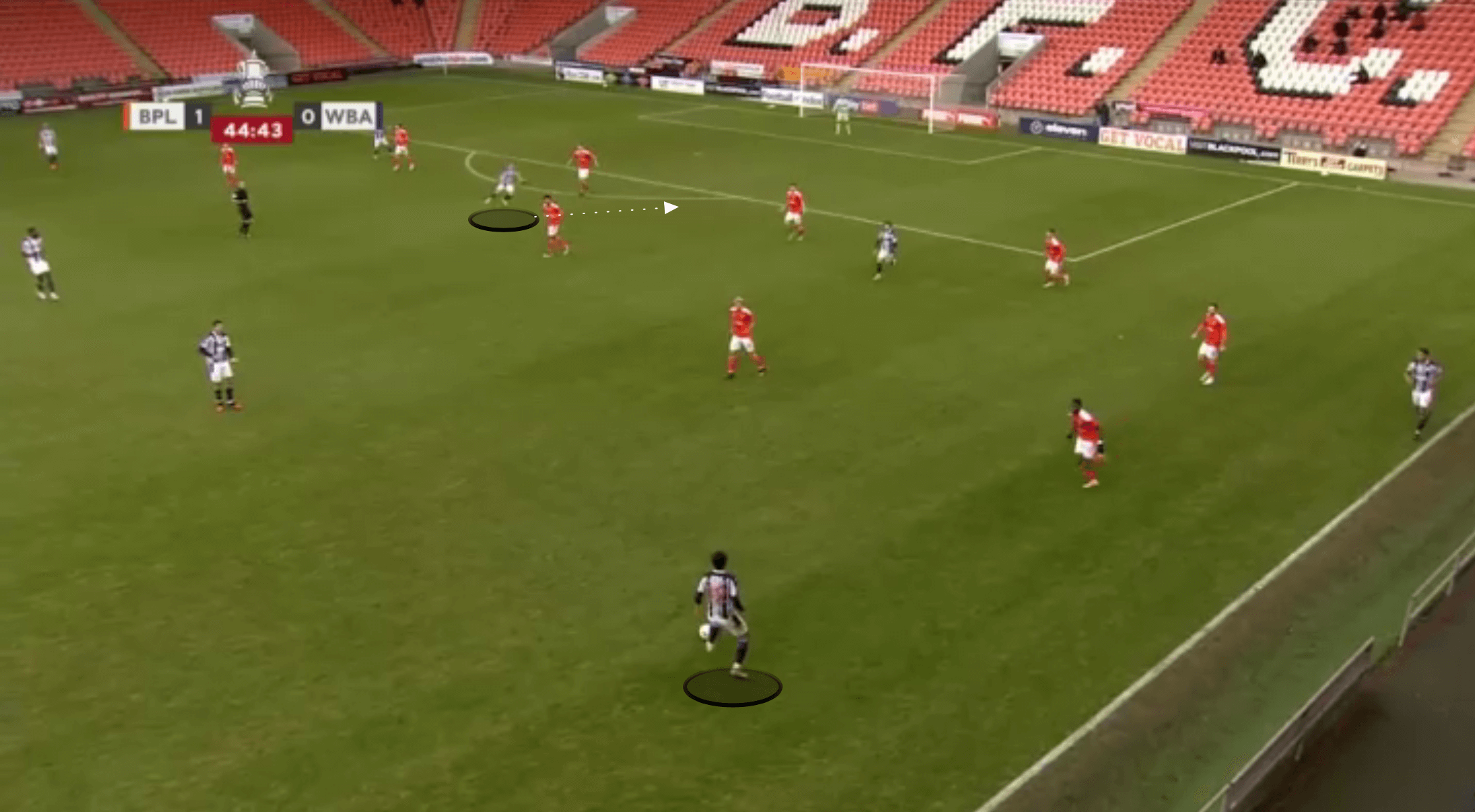 Even when not found he shows a positive attitude to finding a new space and still being able to receive possession. From the above image he doesn’t get played in behind, and below we can see how he checks back inside, showing innovation to play a well-placed one-two with his teammate, before spinning off himself to offer an option once more. 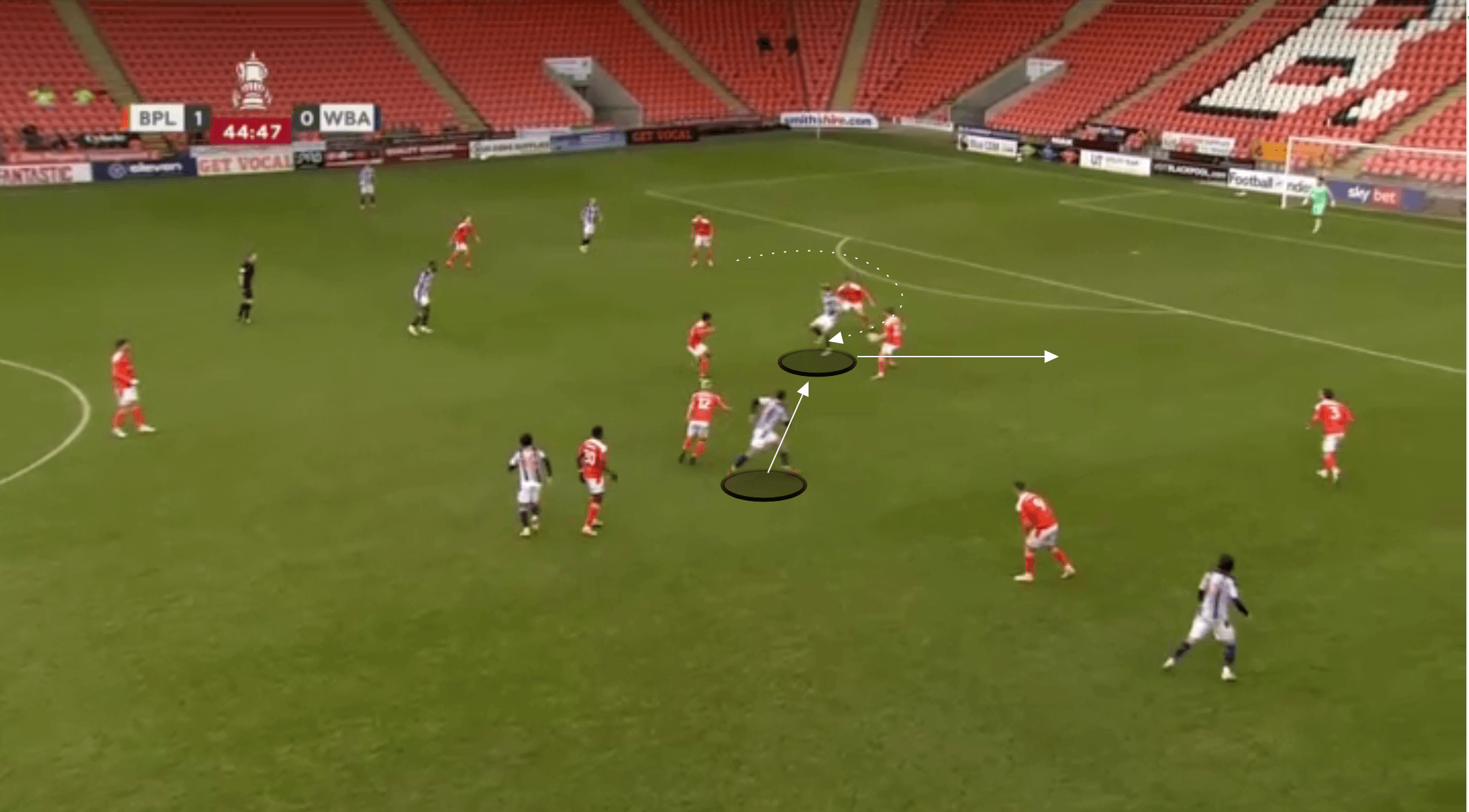 Touches and movement like these are why Gallagher is so much more than a solid defensive midfielder who covers plenty of ground. He has a quality touch in the final third and displays the vision of a creative midfielder at times.

He is willing to take on shots from outside the area too. He needs to work on his overall accuracy, as the shot map below testifies, however. 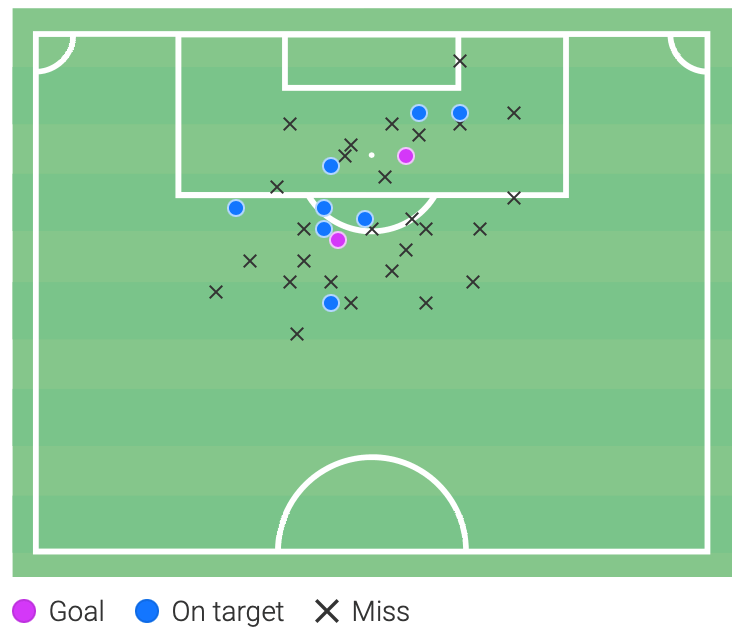 He may receive the ball in similar areas to where he might make a cross from, in the half-space or on the corner of the 18-yard box. He can shoot with either foot and he will take an aggressive touch inside when receiving in this space if he chooses not to cross. He will make a late arrival into the wide-area to receive the pass, just like in the image below, and if he has the space to take on a shot, he is confident doing so. 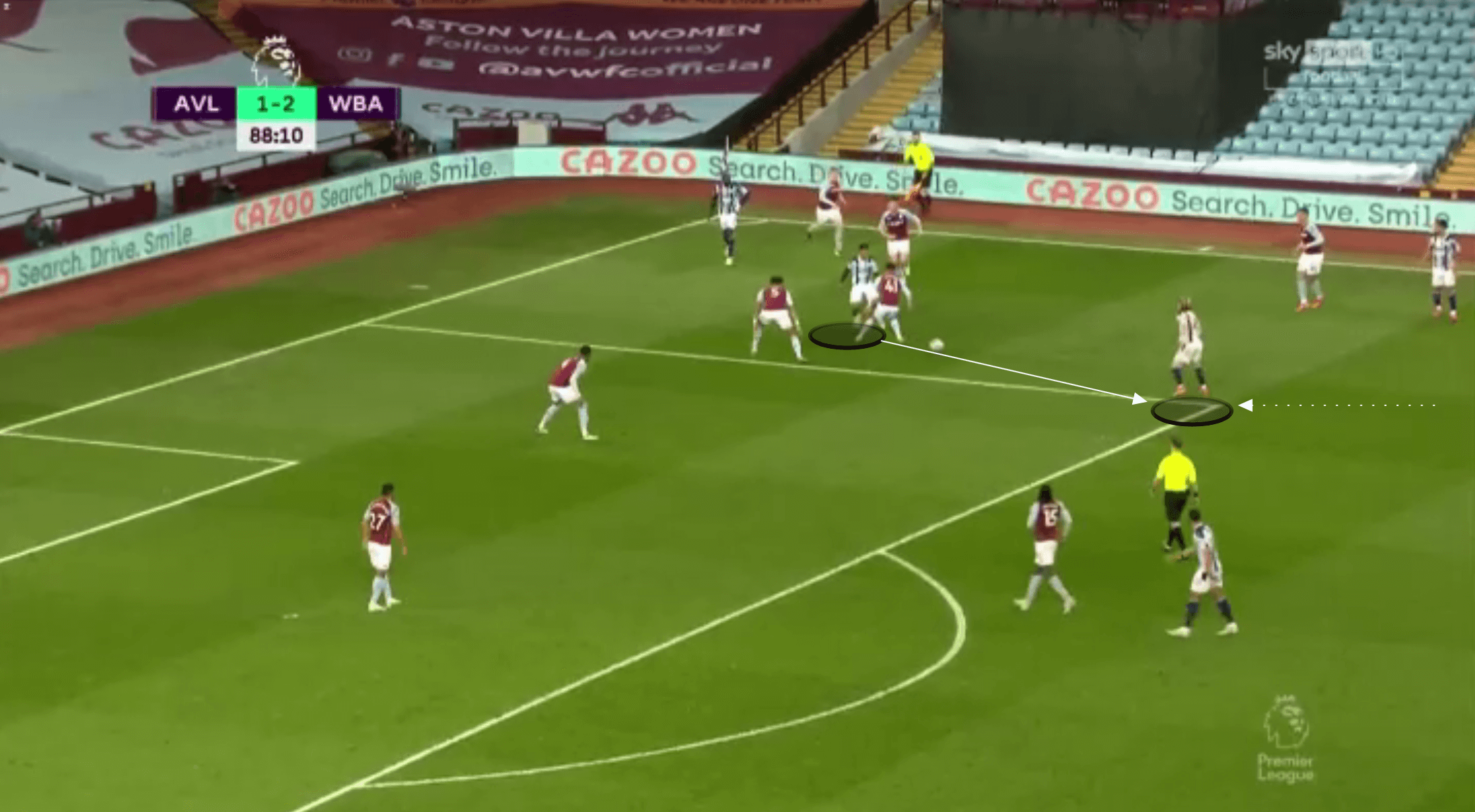 It is highly unlikely, given their vast number of departures this summer, that this will be Palace’s last signing. It will be interesting to see if they continue to recruit as well as they have already this summer. Guehi, Olise and Andersen are all outstanding talents who have all been brought in for good prices given their potential. Gallagher is of course a loan signing, but he is still a player who represents value and potential, whilst still showing quality in his previous time playing Championship and Premier League football.