After taking over in July 2021, Patrick Vieira has been quick to implement his style of football at Crystal Palace. His appointment came as a refreshing change following the departure of Roy Hodgson. Vieira’s possession and controlled-based play led his side to an FA Cup semi-final, which unfortunately ended in defeat to Chelsea.

This tactical analysis will look at how the former Arsenal midfielder has turned Crystal Palace into a top Premier League side. In this analysis, Vieira’s tactics will be broken down and scrutinised as he sets up for the 2022/23 Premier League season.

When in possession Vieira sets his side up in a classic 4-3-3 formation. This consists of a midfield made up of a single pivot and two number ‘8s’. The midfield area is an area of high importance for Crystal Palace and, last season, star man Connor Gallagher excelled in the number ‘8’ role.

When building up, Palace use their defence in a way which allows them to create overloads and numerical advantages. Their back four quickly becomes a back three. The right-back for Palace, usually Nathaniel Clyne or Joel Ward, tucks in alongside the centre-backs to create this three. The defensive nature of both Clyne and Ward allows for this system to work well as neither are overly enthusiastic going forwards.

The energetic and youthful Tyrick Mitchell pushes forward from left-back. This gives space out wide for him to receive the ball. The midfield operates in a disciplined way to create passing angles to get the ball. The ‘six’, usually drops deeper to offer himself as a passing option. By doing this it encourages the other midfield players to move into space centrally, which is now free and try to receive the ball.

For this to work, comfortable and intelligent midfield players are required, as an understanding of when to move and rotate is needed. Furthermore, a high level of control is a must, because usually, the midfielders receive the ball in tight, high-pressured spaces. 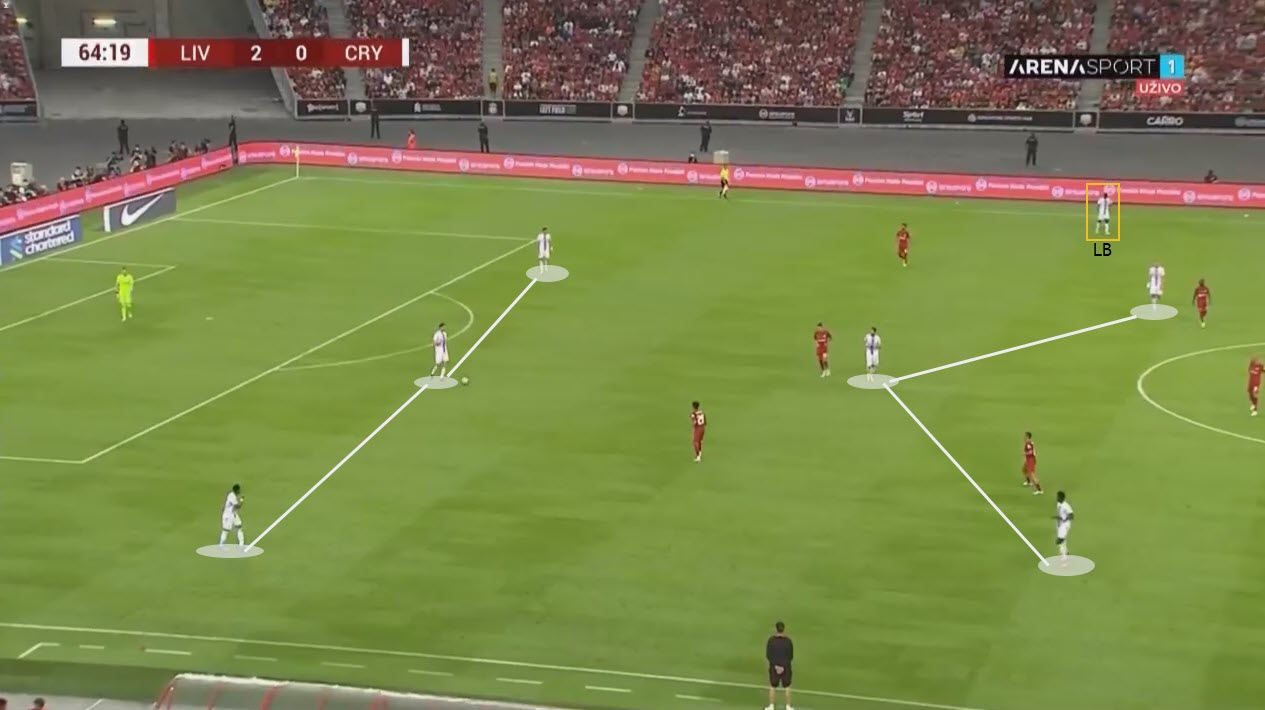 This set-up has a knock-on effect further up the pitch which enables Palace to move forwards effectively. This is largely down to the role of Mitchell and the back three which has been created. Forming a solid base to build from allows much more attacking freedom for the Eagles’ attackers.

The front three of Palace are set up in a way which allows their system to benefit immensely. Starting on the right is usually an out-and-out winger who hugs the touchline and stays wide. Centrally, a target man is used to hold up play and link with teammates, such as former Liverpool man Christian Benteke. On the left, a drifting winger or inside forward is used. This is usually someone who has more of a license to roam in the field centrally. For example, this spot is usually occupied by Wilfred Zaha who loves to cut inside and create chances.

By setting up in this way, the system works perfectly as the space vacated on the left by the inside forward is not lost since the left-back maintains the width and gives the attack balance and structure. 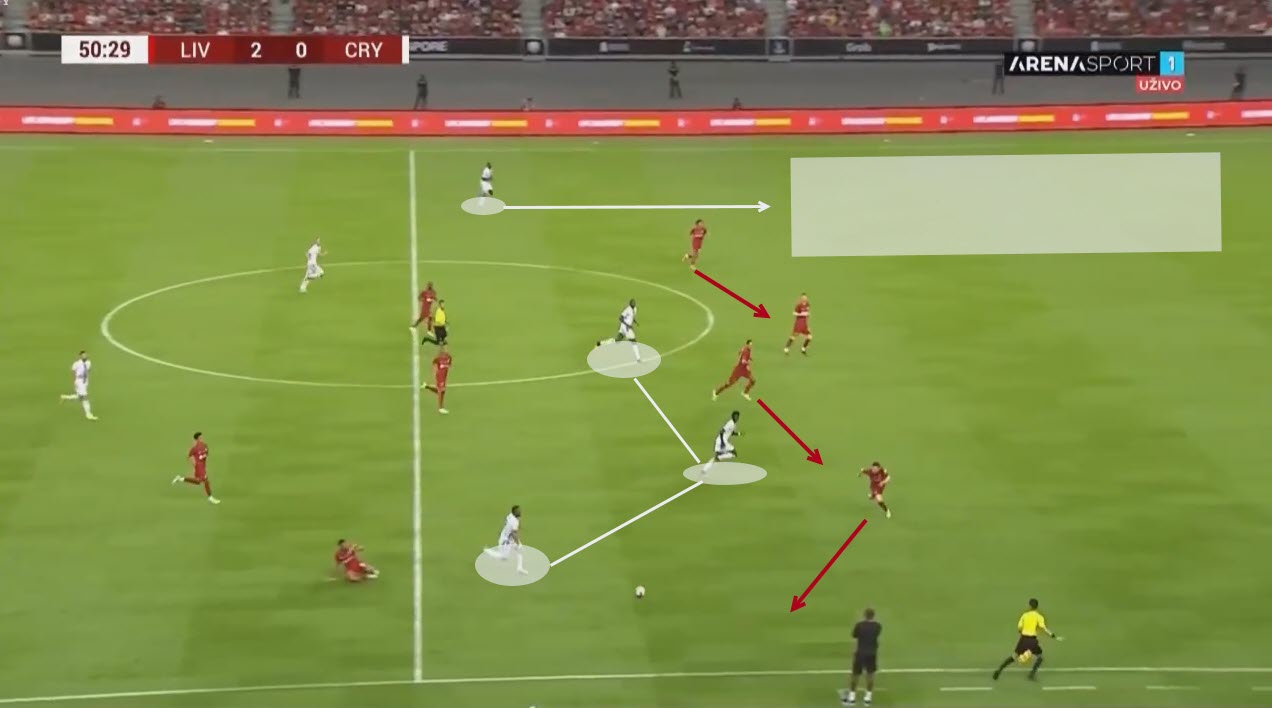 More benefits of this attacking structure can be seen above. As the left-sided attacker moves centrally along with the front three, the opposition defence is narrowed. Ultimately, this leaves space for the advancing left-back to break forward. The compactness of the left-sided forward to the striker also allows for quick combinations to be played.

If Vieira’s side struggles during the build-up, then they are well equipped to switch things up and bypass the opposition press. Their target man is utilised efficiently and Vieira’s team know their roles if the ball is played long. Below is a perfect example of the roles each player takes up following a long ball to the striker.

Fellow attacking players can be seen preparing to run beyond the striker in case of any flick-on balls. This gives an option in behind and if it comes off it can prove very effective. This move is usually fast-paced and, unless it’s anticipated, the opposition can be caught off guard. 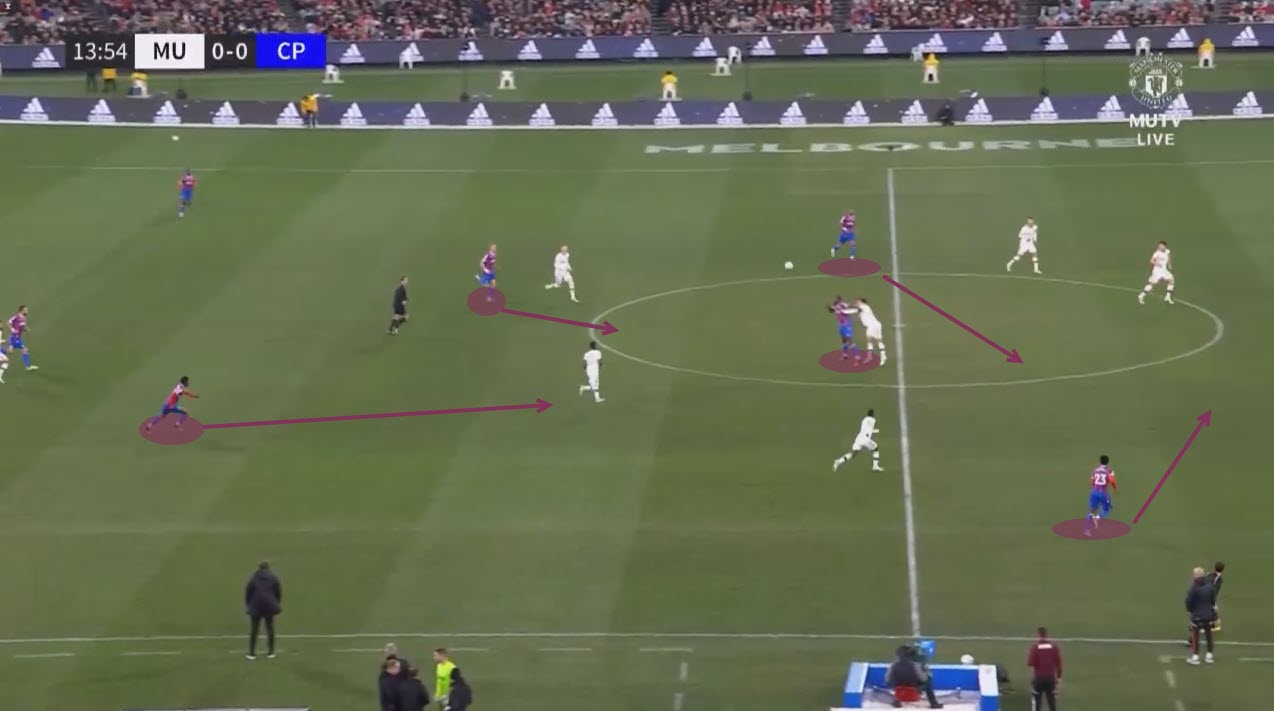 When it comes to the business end of the pitch and scoring goals, Palace are quick to fill the attacking area with bodies. The midfield ‘8s’ support from deep and provide an option for the attacking players. This role is important in the way Vieira wants his side to attack and, last season, Conor Gallagher scored 8 and assisted 3 from playing this role.

Due to the defensive cover offered by the number ‘six’, both ‘eights’ can attack with the freedom to create an almost front-five when it comes to attacking the box. By doing this Palace creates lots of chances in and around the area. 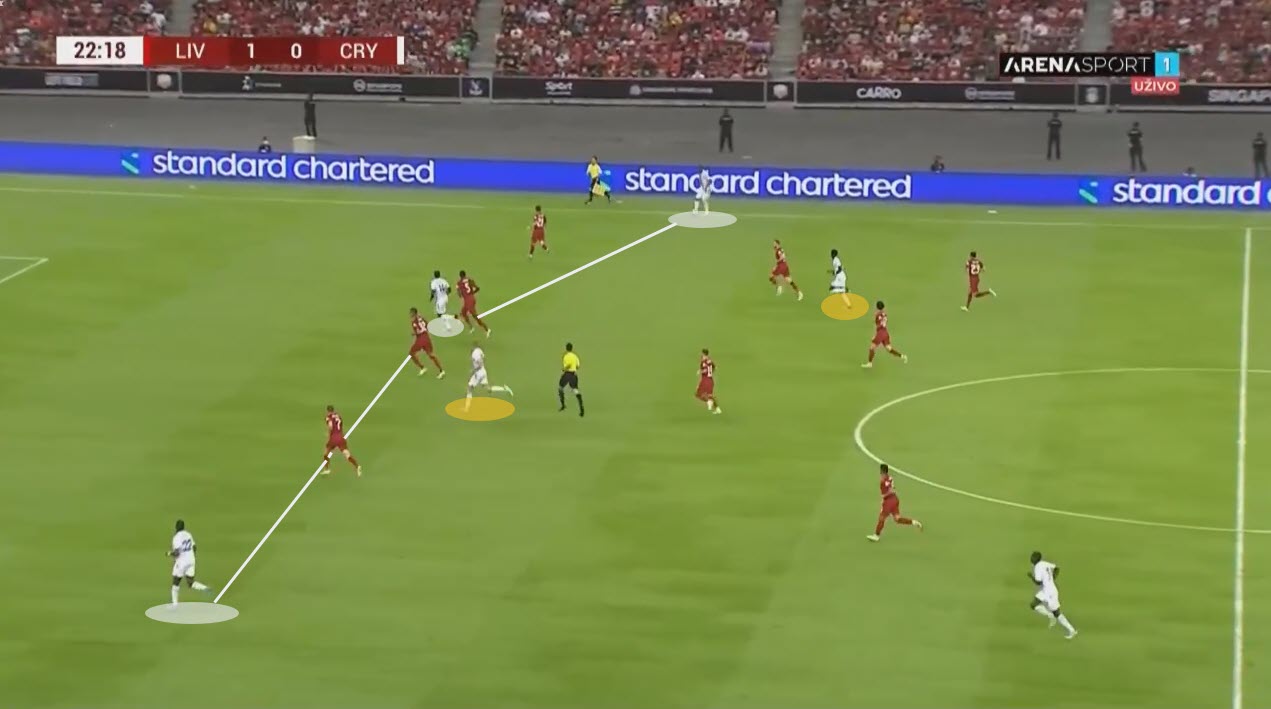 When Vieira’s men are without the ball, they regroup into a 4-5-1 formation. Rarely do the Frenchman’s side go pressing relentlessly. This approach is a more conservative way of defending. To create this midfield bank of five, the wide attackers drop deep to create the flat bank, with the five spanning the width of the pitch. By using this shape, they can close down space quickly as players are close together.

The back four remain structured and rigid and they are the ones who dictate the depth of the mid-block. They are quick to squeeze up the pitch and regain space from their opposition. 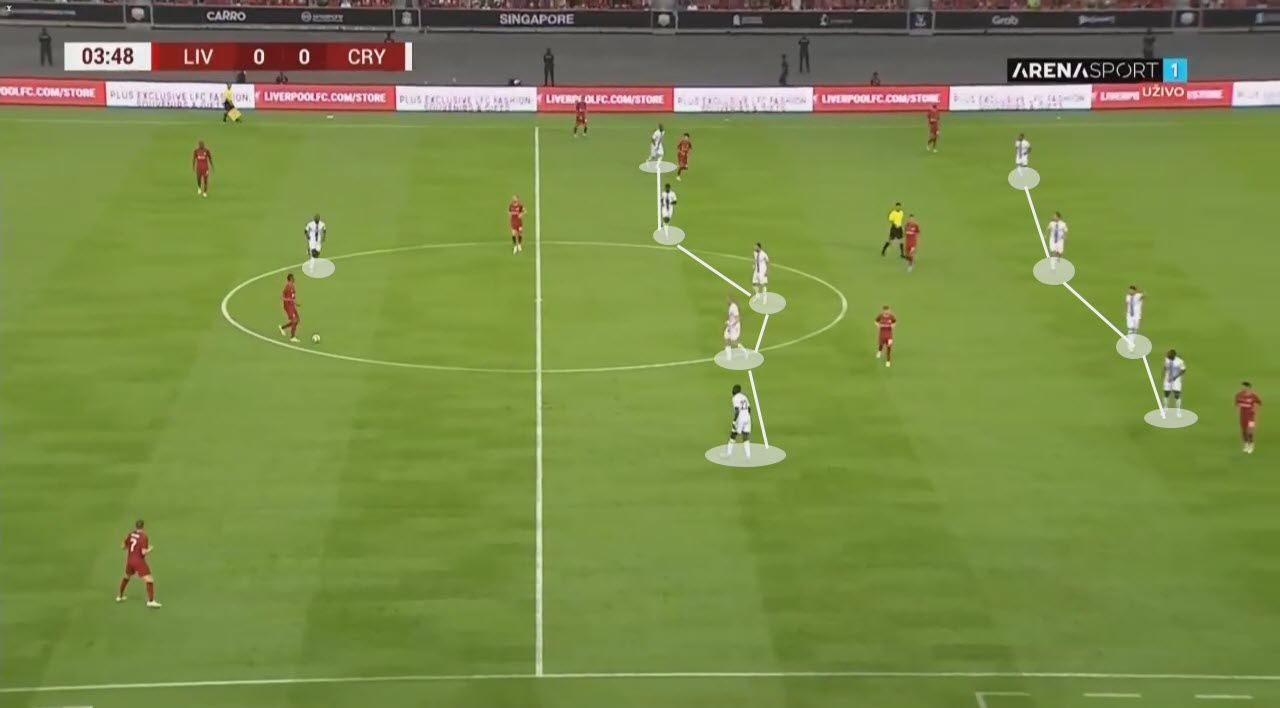 If the opposition is to make it centrally into the Palace midfield area, then they are quick to close down and limit their time on the ball. A ball into the central area is dangerous so Palace quickly get bodies around the ball. By doing this they nullify any opportunity for the opposition to turn or pass the ball forwards. The mid-block is useful for this as the gap between defence and midfield is small enough to quickly react to situations like these. 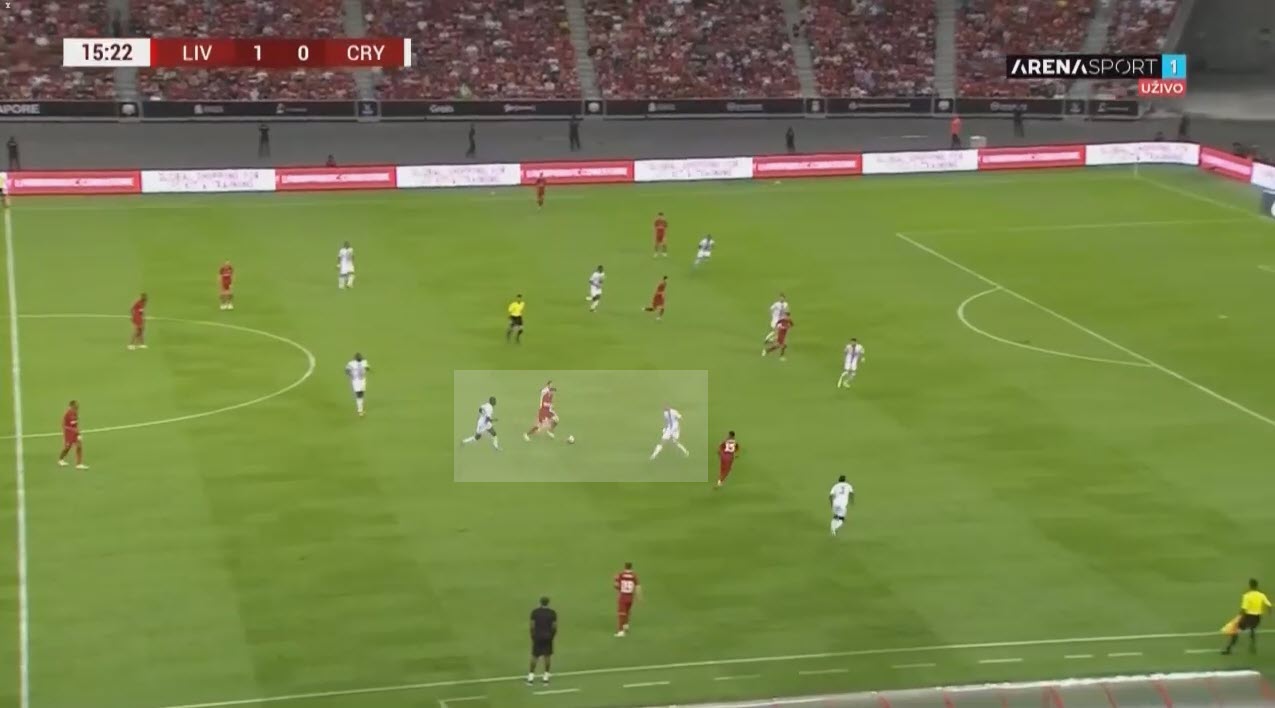 When defending the penalty area, the Eagles like to ensure they have a huge numerical advantage. By doing this, they are able to reduce the chance of losing the first contact. This is vital in the penalty area as most goals inside the box are scored with only one touch. Palace’s approach leaves them short in terms of breaking out, but their transition makes up for this.

The compactness and close-knit structure deployed by Palace make it virtually impossible for their opposition to create any real goal-scoring opportunities once Palace are in their defensive shape.  However, the compactness causes Palace to become very narrow, leaving space out wide. Below you can see how tight the defence is. If the opposition quickly plays a ball out wide into the box, with a well-timed run, this can become dangerous and lead to potential goals conceded. 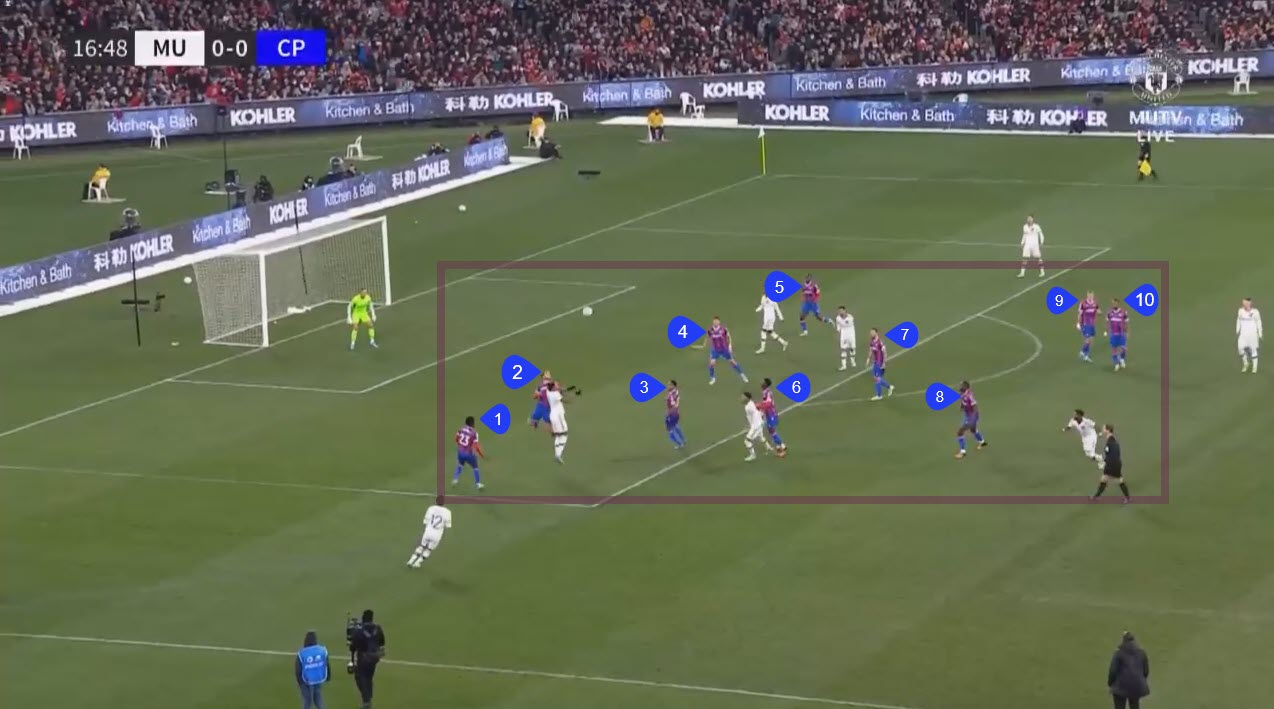 As mentioned, Crystal Palace sometimes defend so deep that they are left with no one high up the pitch. Their attacking transition is much more direct than most teams. Their use of a target man enables them to fire long balls forward and cause problems. By playing long not only does it instantly relieve the pressure it also put the opponent in a situation that they do not want to be in, facing their own goal and under pressure.

This transition is only effective with willingness from the forward players who must quickly break forwards to chase and support. The striker usually does well in gaining possession and either holds play up, wins a foul or wins a throw-in. This method of transition is great as the ball is quickly played into the opposition’s half immediately changing the momentum of the game. 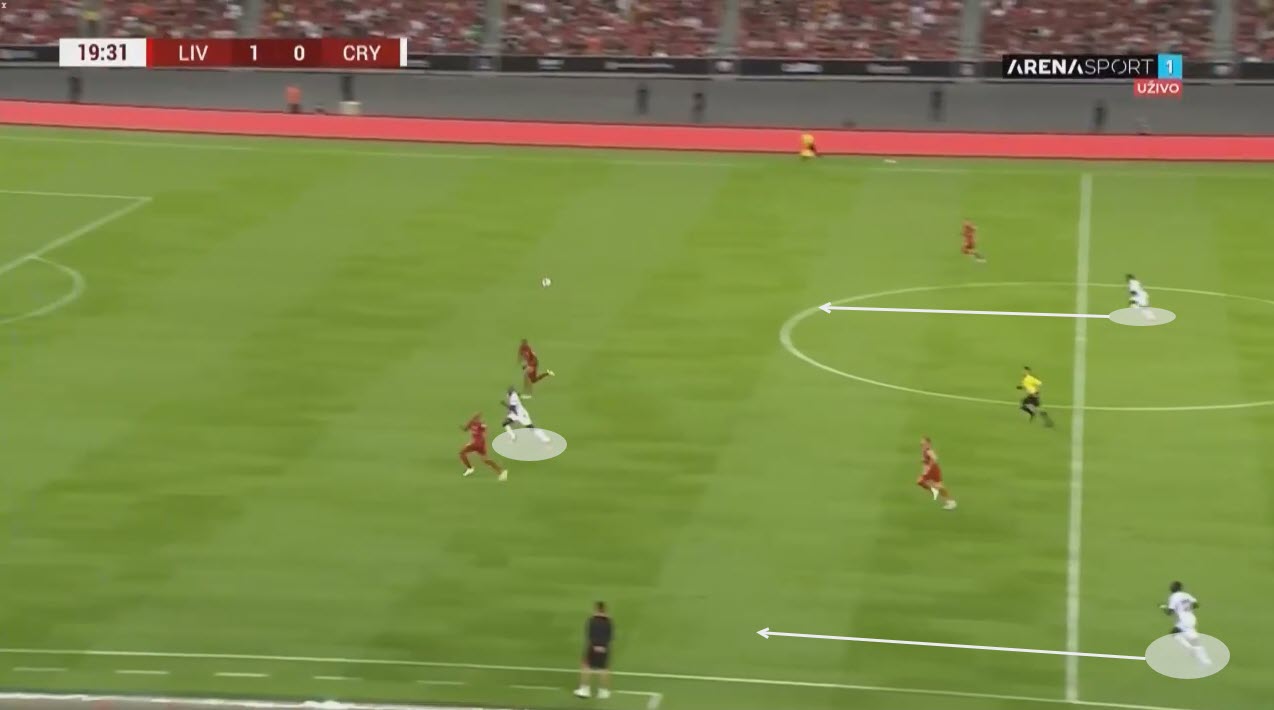 Their defensive transitions are successful in the sense that they very rarely get caught outnumbered. The only potential area for weakness is on the left side. This is where the left-back will have pushed high and left space behind, which the opposition can exploit. This is something to be wary of. 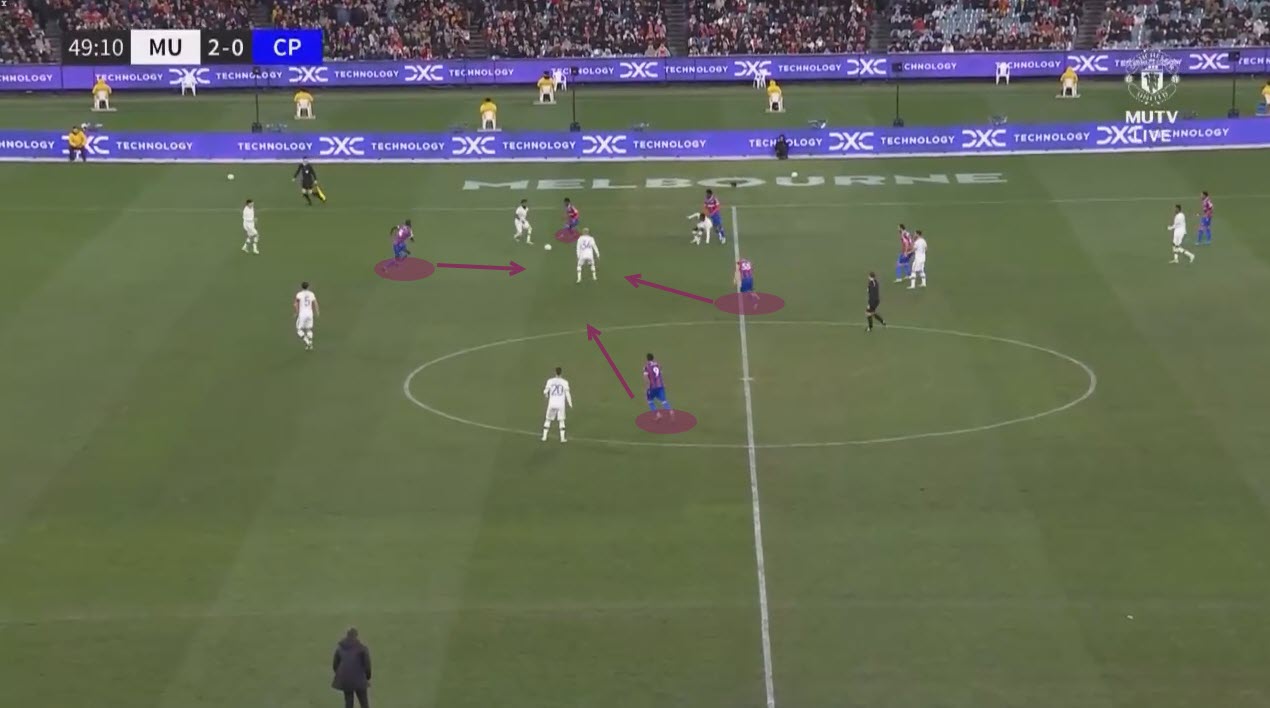 Overall, some promising signs over pre-season should give Crystal Palace fans confidence heading into the new campaign. With a few smart additions, such as midfielder Cheick Doucouré, Palace look set to crack a top-half finish. Vieira showed some promising signs in charge last season and a European spot wouldn’t be totally unrealistic following the momentum and feel-good factor about the club.

The style of football Vieira has brought to Selhurst Park deserves success. A trophy or European football should be the goal for this season. The side that Vieira is assembling will soon be able to compete with most in the league.