When West Brom completed the signing of Matheus Pereira it was seen as something of a coup for an EFL Championship side. The Brazilian had previously plied his trade in Portugal and the Bundesliga, where he had performed solidly. Furthermore, at the time the Baggies negotiated an obligation to buy in the case of promotion to the Premier League. In hindsight, this seems a very wise decision, as before football was suspended West Brom were six points clear of Fulham in third, with Pereira having a key role in their rise and success. The price of this potential transfer is £8.25m; which after his performances this season seems like a relative bargain.

Thus far the 24-year-old has made 33 appearances, including four off the bench. In terms of attacking output, there has been six goals and 12 assists, including a hat-trick versus Swansea City at home in December. Head Coach Slaven Bilić has predominantly played Pereira as a 10, although he is proficient as a right-winger, cutting inside onto his favoured left foot.

In this tactical analysis in the form of a scout report, we’ll look at Pereira’s role in Bilić’s tactics and conduct analysis on various aspects of his game.

Bilić is insistent on retaining possession of the ball and methodically building from deep. As aforementioned Pereira is mainly deployed centrally behind the striker. In this position, his main responsibility is to be the link between the attacking quartet and those in deeper positions who are searching for incisive passes into the front-four. We can see this below where Pereira has dropped deeper and pulled a QPR player with him, before flicking a pass around the corner to Jake Livermore acting as the third man here to capitalize on the space left by the QPR player drawn in. 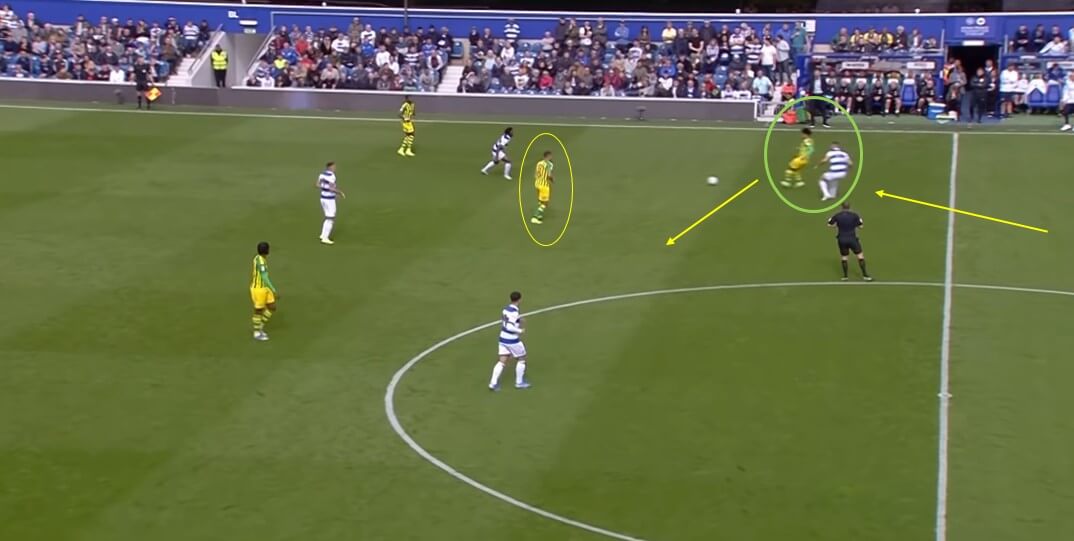 The two full-backs are attack-minded and advance high, this occupation of the wide channels allows the wingers to drift inside to the half-spaces for more feasible interchanges between the attacking four. Situating themselves between the lines and in these areas of the field they can have better orientation upon receiving possession, therefore creating further offensive danger.

A common movement for Pereira is to receive possession centrally, or mainly on the right-wing, before neatly manoeuvring for a switch pass to an overlapping full-back, particularly to the ball-far full-back who has likely found space and time due to defence initially shuffling across. Such a scenario is visible below. Pereira has collected possession on the right flank, in space, and because his wider positioning has emptied the 10 zone he can dribble inside and switch play to the left-full-back on the underloaded side where there is a potential crossing opportunity. 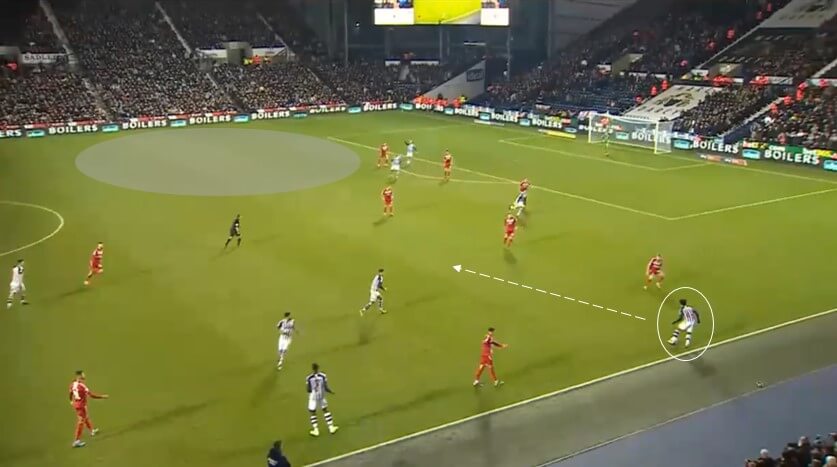 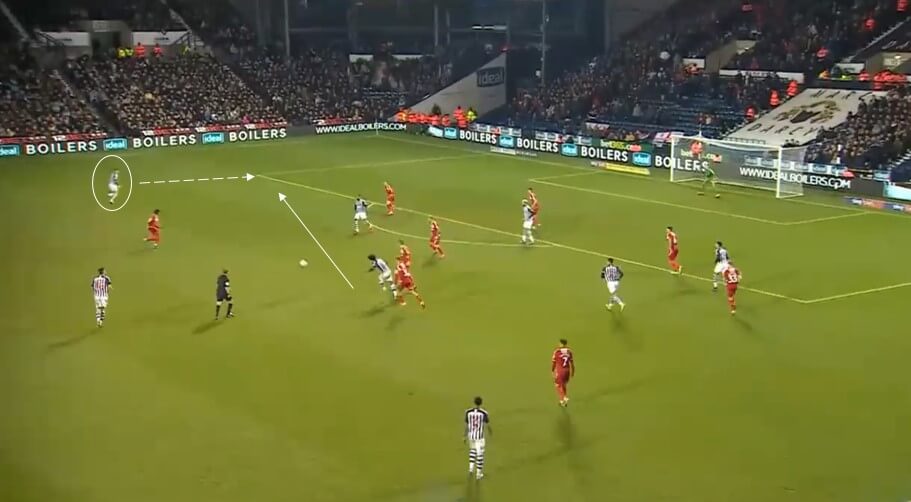 It is also worth noting that before football was suspended Bilić had altered formation to a 4-3-3, thus removing a 10, resulting in Pereira being played in a wide-right position. These differing positions require different skill-sets. Originating in a wide position, especially when his natural tendency is to cut inside, gives Pereira increased space to play in compared to when he plays behind the striker. Consequently, the Brazilian can make greater use of his dribbling capabilities and creative ability. When looking at the statistics his creativity is evidenced by him having 2.5 key passes per 90, a league-high. Whilst not always the most convincing measure of performance, Pereira also having the joint-most assists in the league with 12 is demonstrative of his importance to West Brom.

When playing in such a position like that of a 10 then much of the creative burden is likely to be on them. Despite operating in more congested space centrally Pereira has transitioned well into the rigours of the EFL Championship with his nimble footwork, excellent agility, and superior passing. At 5’7” the 24-year-old can dart away from physical defenders and evade their challenges. These specific skills are particularly relevant when playing as a 10. 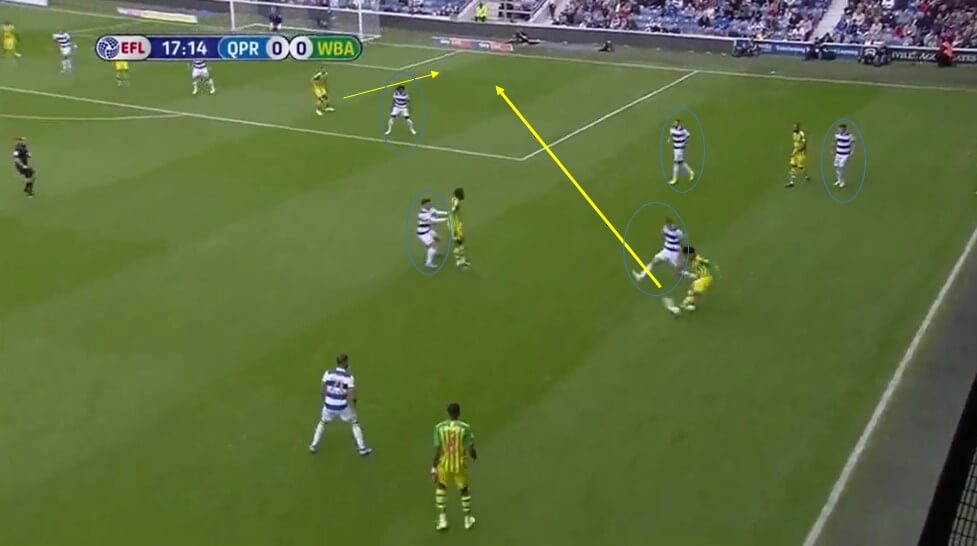 One of Pereira’s main strengths is his vision. Which, combined with his technical quality upon execution, can help bypass numerous opponents, releasing teammates into space and dangerous positions. A superb example of this occurs above versus Queens Park Rangers. Pereira initially collects possession from a throw-in and body feints to get a yard of space. This leads to a quite incredible reverse pass that takes out five QPR players. Such a pass requires exceptional precision and weight and is indicative of his technical superiority over the majority of the rest of the league. 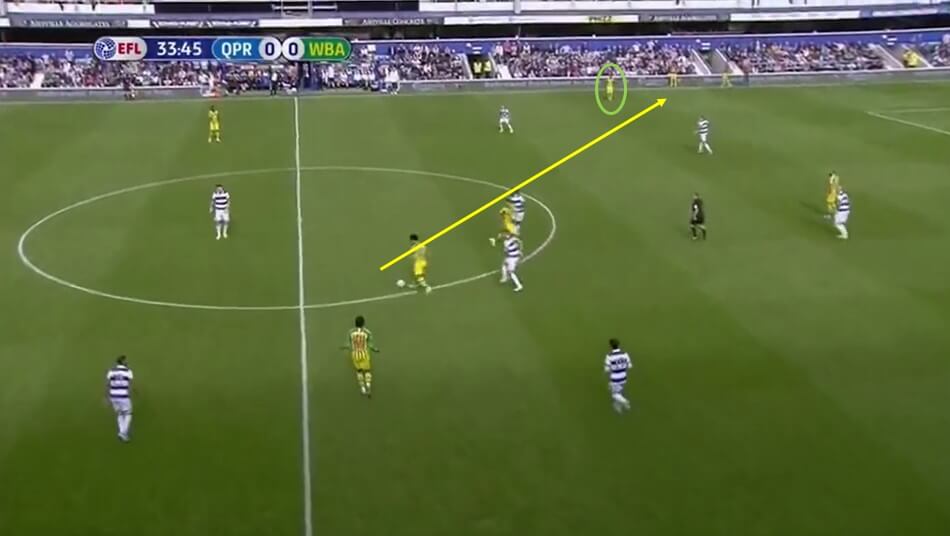 Another example of the directness of his passing is evident above. Pereira has possession in midfield before playing a long switch pass out to left-winger Grady Diangana. Being able to successfully execute these types of passes, in addition to recognising the opportunity of them in the first place, is beneficial in constructing offensive moves and exploiting gaps in the opposition defensive structure. West Brom are the joint-top goal scorers in the EFL Championship this season with 64 in 37 games. 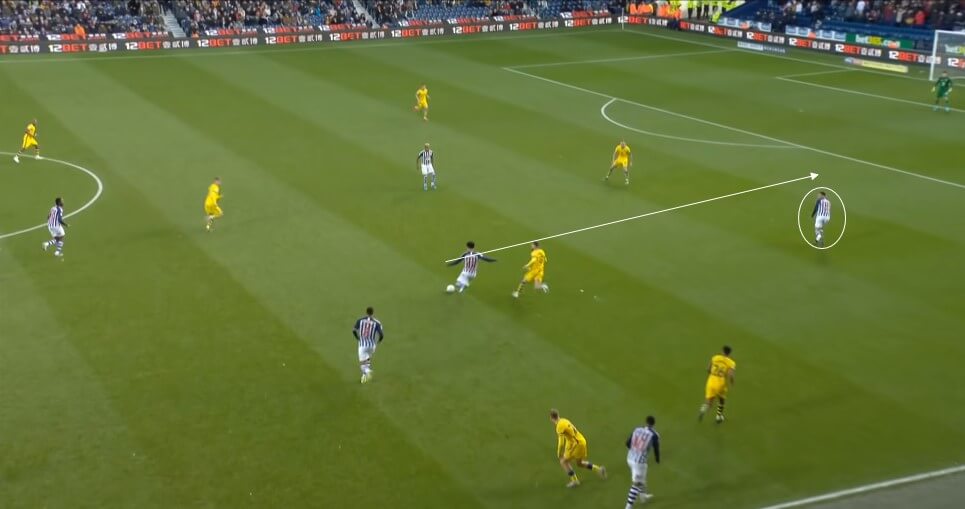 Again, facing Swansea City, a significant amount of space has appeared between the centre-backs, while Hal Robson-Kanu is in a prime position to profit from that space. In the subsequent action, Pereira does pass through to the Welshman, with the ball weighted extremely well. This exhibits two vital aspects of Pereira’s creativity. Firstly, his awareness of his teammates and their runs, and, technical competence. 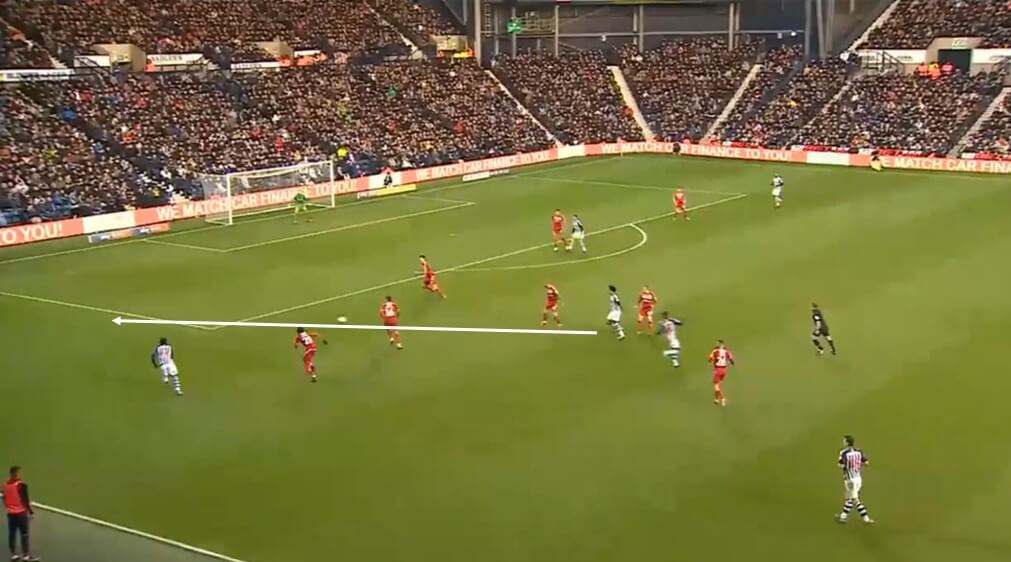 Similarly here, Pereira makes an incisive, diagonal through pass to open up the Middlesbrough defence. As the season has progressed it seems teams have acknowledged the talent Pereira has meaning they have placed greater defensive importance on mitigating his attacking effect. This can allow space to arise for his teammates elsewhere on the pitch, like Diangana because the opposition’s primary focus is on Pereira.

West Brom has averaged 54.1% possession this campaign. You always need to be wary ball retention doesn’t become purposeless or stale. In other words, dynamism is an important ingredient in attempting to disrupt the opponent’s defensive shape. However, Bilić has a number of players with the necessary profile at his disposal, such as Pereira.

On the pitch every action has a consequence. A dribble can be a method of progressing the ball into more offensive areas, creating shooting opportunities. Opposition pressure is also an inevitability, thus potentially freeing teammates to cross, pass or switch to. Therefore, dribbling can be a useful mechanism, and so Pereira is a valuable asset in this context, especially when considering his statistics. Pereira currently makes 1.5 dribbles per 90, at a success rate of 62%. Furthermore, out of the 22 players who have 50+ successful dribbles in 2019/20 his completion rate puts him 8th best in this specific category.

Subsequently, Pereira has garnered this reputation as being an accomplished ball-carrier. In practice, the opposition may allocate more players than usual to try and stifle him. A by-product of this decision is that Pereira can release his teammates into space because the opposition is occupied with his actions to a greater extent in light of his previous performances. 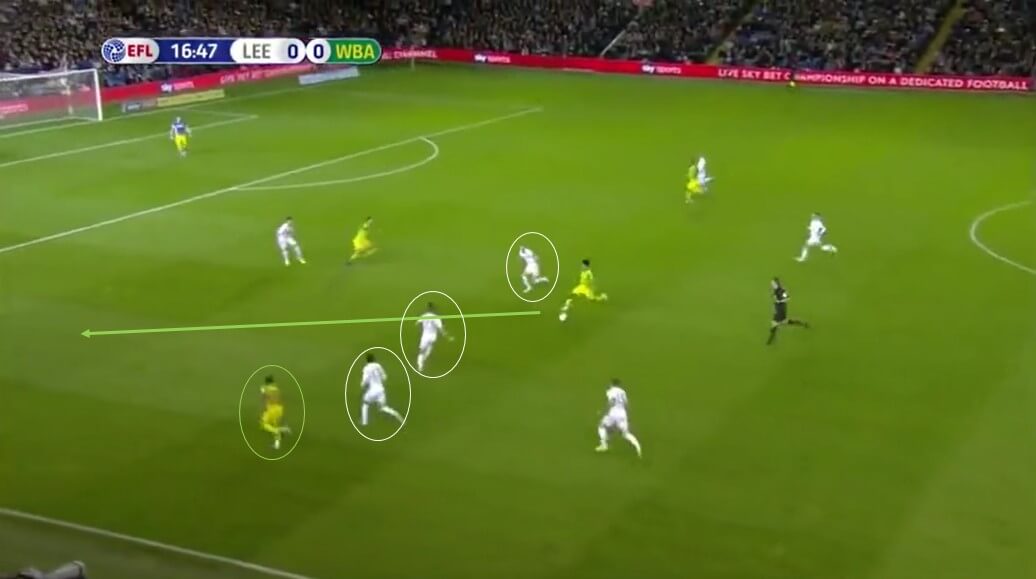 For example, in this scenario above versus Leeds, Pereira’s ball-carrying has resulted in two Leeds players directly pressuring him. Yet left-winger Diangana has identified space ahead, and because the Leeds defenders are occupied with Pereira the ball can be passed to him without him being pressured immediately.

The previous example portrayed a situation whereby Pereira allowed Diangana to become free. Nevertheless, there are instances where Pereira can forge space for himself. This is demonstrated in the image below. Here the Brazilian spins away from Blackburn midfielder Lewis Travis, thanks to his agility and balance, and can drive into now unoccupied space that he has essentially generated. 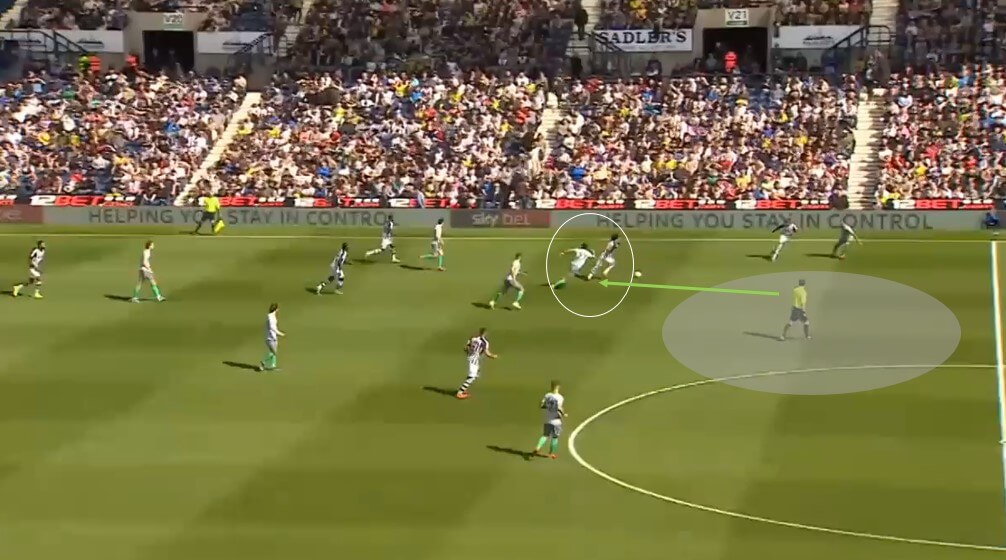 Pereira’s primary responsibility in the central role he’s situated in is to continually shuffle laterally to protect passing lanes. Depending on the build-up structure of the opposition he can also be tasked with trying to nullifying the influence of the pivot for example. The 24-year-old isn’t the most aggressive and doesn’t tend to initiate pressing sequences. Pereira is dribbled past 1.2 times per game, joint-highest in the West Brom squad, portraying his perhaps lackadaisical ways, although an alternative view could be that he’s preserving his energy for his attacking activities where he’s at his most deadly. 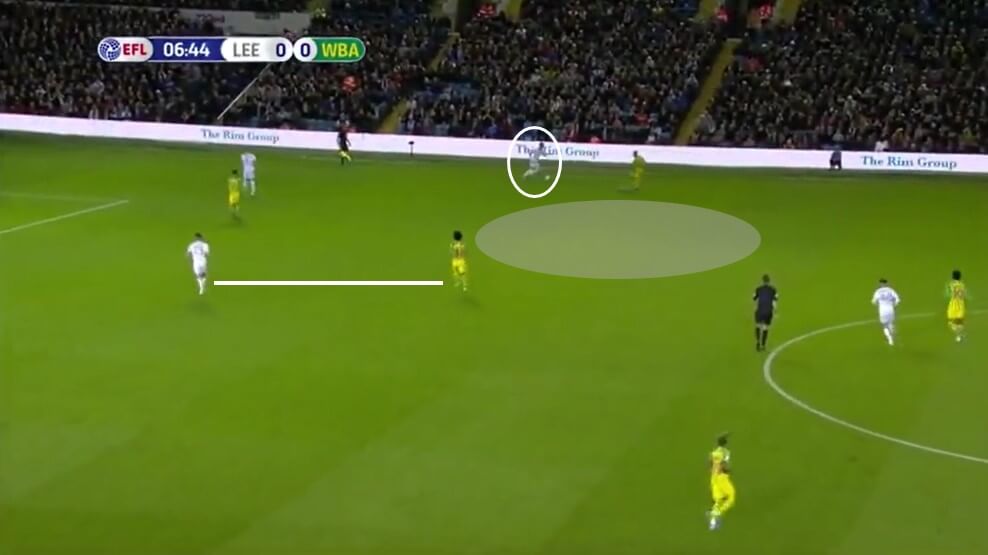 In this game away at Leeds United, Pereira was directly up against Kalvin Phillips, arguably the best midfielder in the league. Phillips’ reputation as Leeds’s lynch-pin is well-known. Here we can that although Pereira isn’t touch-tight to Phillips he is in close enough proximity to apply immediate pressure if necessary. This is also beneficial as it maintains central compactness better. If the ball-player comes inside Pereira is positioned in such an area that means he can press him – there is not a sole focus on Phillips, it is extremely important to be tactically flexible within a game scenario. 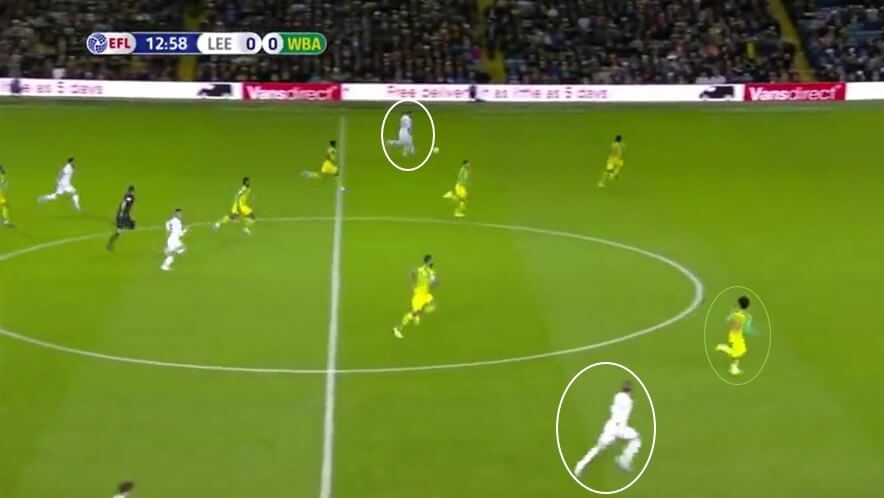 Furthermore, Pereira does at times have the capability to identify weaknesses in the defensive structure. In this instance above the Baggies have been caught short after a free-kick, with the centre-backs still upfield. Nevertheless, Pereira sees this issue and temporarily covers in for the out-of-position defence. Consequently, he is able to clear away a cross that is likely to have been successful – thus creating an excellent goalscoring chance – without his intervention.

Over the course of the season Pereira has emphatically demonstrated how his transfer was seen as a coup from the West Brom. His creative abilities are reflected in his total goal contributions and key passes statistics, which are both in the upper echelons of the league as a whole. I believe the biggest deficiency within Pereira’s game is the defensive side. This is natural for a player in his position and with his profile but improving it would undeniably make him more well-rounded. More intelligent pressing, in terms of the shape of his runs and ensuring his efforts are coordinated with that of his teammates would be helpful. Nonetheless, the Brazilian has been one the most exciting, standout players this campaign and it would be intriguing to see how he would potentially handle the step-up to the Premier League.