The top-5 European leagues are relatively saturated in terms of content and interest from around the footballing world and this saturation extends to recruitment departments within football. That does not mean, however, that there are not players in those leagues who we can consider ‘under the radar’ or less well known than some of their counterparts. Part of working in recruitment within a professional club is having the ability to identify and then track players that fit into this category. In this article, I have picked out three midfield players who I consider to be less well known than some others who are currently playing in their respective leagues.

The process for this is relatively simple and my dataset includes all midfielders in those leagues who are 23-years-old or under and who have played at least 500 games this season. All of the data is from Wyscout and I use Python to convert the raw per 90 data into percentile rankings. These percentile rankings can then be used to create pizza charts that visualise the players’ performances across key metrics that I have selected as part of my midfield player profile.

If any of you are reading this and want further information into the methodology and process behind this then feel free to reach out to me on Twitter @FMAnalysis.

Last week I wrote a similar piece although this time looking at strikers. If you want to read that piece then you can find it here.

Before we start I should make it clear that the purpose of this piece is not to pick the ‘best’ players in these positions and instead to find the ones that will be interesting to track going forward. 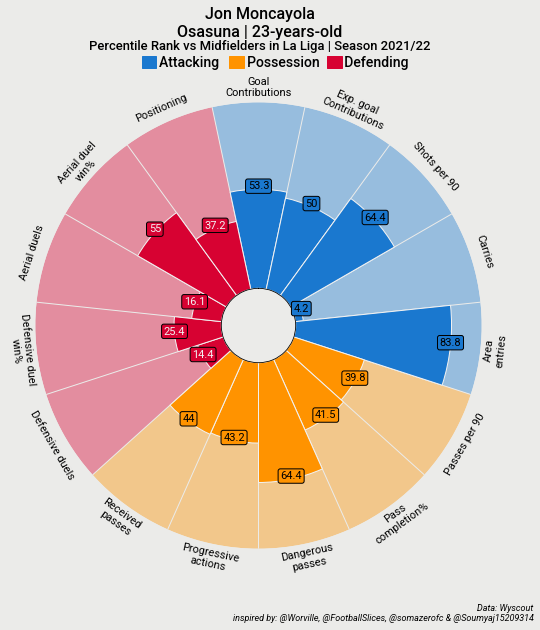 The first player that I have picked out is the 23-year-old Spaniard Jon Moncayola who is contracted to Osasuna in La Liga. He is a product of the youth academy at the club and has firmly established himself over the course of recent seasons as a key first-team figure. While Moncayola has not yet managed to get selected for what is an incredibly talented Spanish national team he was previously a regular member of the u21 setup. Interestingly in recent weeks, there have been several media reports linking the Spanish midfielder with a summer move to the English Premier League with the likes of Arsenal and West Ham reported to have an interest in his signature.

Moncayola is comfortable playing in the midfield unit as either a ‘6’ or as an ‘8’ and he is a tall and athletic player who is listed at 184cm | 6’2″.

The Spaniard is such an interesting player because of his versatility in terms of the role that he can play. He is capable of playing as the runner in the midfield with responsibility to get forward into advanced areas and to occupy the half-spaces in order to provide balance and angles in the attack. He is a threat to score from late runs into the area in this role. He can also, however, hold a deeper position as the passer in the midfield with the ability to break a line with a pass or quickly switch the angle of the attack.

As you can see from his pizza chart above he is a balanced midfield player who does not immediately stand out in any one area of the game. You could argue that his ability in the attacking phase is slightly more impressive with very good numbers for area entires and above-average numbers this season for shots, goals contributions and expected goal contributions.

Even if a move to the Premier League does not come to fruition for Moncayola this season I would be very surprised to see him stay at Osasuna next term. 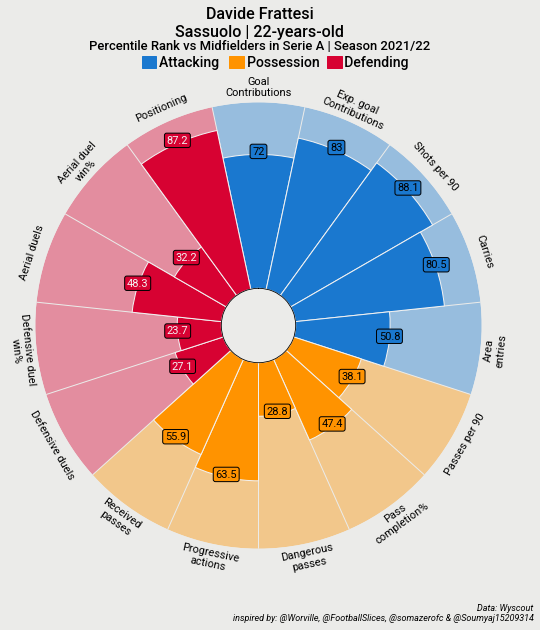 The next player that we are going to look at is another one who is attracting significant interest domestically so far this season in the 22-year-old Italian U21 international Davide Frattesi of Sassuolo. Last summer saw Sassuolo lose the Italian international midfielder to Manuel Locatelli and the club did not even have to spend a penny to replace him as they already had Frattesi in the club. The 22-year-old is a product of the Sassuolo youth system although he has been out on three loan spells already with Ascoli, Empoli and Monza. This season has seen him firmly establish himself as a regular for his parent club at first-team level.

Frattesi is another who is versatile in terms of his position and his role in the first-team. He can play deeper as the ‘6’ but he also provides significant threat when breaking forward from the ‘8’ position.

Frattesi is a powerful runner who can progress the ball through driving forward in possession of the ball but he is also a creative passer who can break a line and find the final pass that releases the striker. His ability on the ball has been one of the key factors in Sassuolo’s strong season this term and with the Italian national team struggling he could see himself as part of the senior team setup sooner rather than later.

Several of the ‘bigger’ Serie A sides seem intent on securing the signature of Frattesi this season but I would not be surprised to see him spend another year at Sassuolo, at least, before moving on. 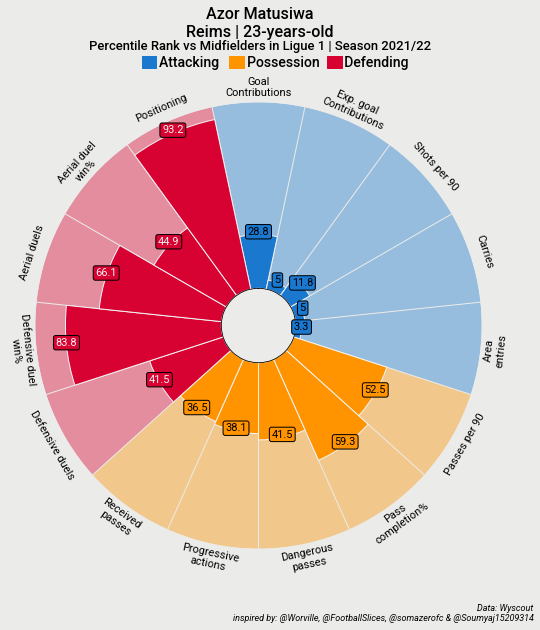 Next, we go to a midfielder who is currently in his first season in the top-5 leagues in the Dutch midfielder Azor Matusiwa of Reims in France. Matusiwa is actually a product of the youth academy at Ajax but he never made the breakthrough at first-team level at the club. Instead, he moved within the Netherlands first to De Graafschap and then to Groningen before moving across to France at the end of August 2021 for a fee reported to be in the region of £3.6M. That fee is now looking like a complete bargain.

The young Dutch midfielder is very much more comfortable playing as a ‘6’ either at the base of the midfield three or as one of two players in a double pivot. His mobility within this role and defensive efficiency are reminiscent of a raw version of the French midfielder N’Golo Kante. He is very press resistant with the ability to play shorter passes or access the wide areas through switches of play. Out of possession, he covers the width of the field with the ability to cover large areas of space due to his engine and speed. He is aggressive and diligent when engaging in defensive duels.

As you can see from his pizza chart Matusiwa is very much more impressive in the defensive phase of the game although his passing and pass completion % numbers are also good. He wins a large number of his defensive duels and his positioning (interceptions and blocks) allows him to win the ball back for his team and start them off in the attacking transition.

Although he is currently in his first season at Reims I would not be surprised to see some of the bigger teams within France registering a significant interest in securing the services of the industrious Dutch midfielder.

Understanding how to judge and weight data is an important part of any recruitment process. Even if a player does not have top metrics in every section of your profile understanding the extent to which they are limited in this respect by their club style and performance is an important aspect of the way we can identify undervalue or under the radar players.

The three players that I have picked out for the purposes of this article all have the potential and character to move to a higher level than they are currently playing at within the top-5 European leagues.